At CES 2021, LG introduced its first line of QNED TVs. These are boasting a new technology that LG is using in its TVs for 2021. Which is a form of LED, but what exactly is QNED? Is it better than the holy-grail that is OLED? And how does it compare to Samsung’s QLED Neo technology that was also debuted at CES 2021.

TV makers have long been engaged in a battle of alphabet soup with their technology names. There’s OLED, QLED, QNED, LCD, LED, just to name a few.

We’re going to take a deep dive into QNED and tell you everything you need to know about this new technology and whether you’re next TV should be a QNED TV.

QNED is mostly a branding term. Which is Quantomdot Nanocell Emitting Diode.

Basically, QNED will make use of around 30,000 LEDs used in the backlight. That is far more than the number found in its existing LCD TVs. This is because QNED is using MiniLED technology. That’s a backlight that can use a large number of very small LED lights to control brightness and create effective contrast between different areas of the screen.

LG’s QNED TVs in particular, boast 2,500 dimming zones to limit blooming and ensure light is directed where it is supposed to be, across your screen.

MiniLED is not new, actually, TCL has been using it in its QLED TVs in its 6 and 8-Series TVs in recent years. And Samsung will be announcing MiniLED TVs shortly.

According to LG, the new backlight “comprises up to almost 30,000 tiny LEDs that produce incredible peak brightness and a contrast ratio of 1,000,000:1 when paired with up to 2,500 dimming zones and advanced local dimming zones.”

Because of that, the contrast and brightness control is going to be similar to OLED. Remember that OLED panels can turn off individual pixels entirely, which leads to the so-called “infinite” contrast ratio between bright highlights and deep blacks. However, LG says that QNED won’t beat OLED. At least not yet.

Of course, the backlight alone won’t make the QNED TV the best on the market. It also depends on the processor. Half of LG’s new QNED TV models use the a9 Gen 4 AI processor, while the others use a lower-end a7 processor. Basically, just having QNED or MiniLED plastered on the box isn’t going to mean that it is the best TV around.

For LG in particular, the announcement of QNED is pretty interesting. Since it is still selling its OLED TVs, and it’ll be cheaper than its OLED lineup.

LG makes the best OLED TVs in the business, and those are not going away. QNED is basically sitting in its lineup as a middle ground between its OLED which is its holy-grail TV line, and the Nanocell. Which are LED TVs. And usually only a few hundred bucks.

LG isn’t getting rid of OLED, but it is pretty clear that it is looking to keep its ground in the LCD space, and not lose that to Samsung. Who has been really good with LCD and QLED TVs in recent years.

OLED basically, still has better colors than QNED does, and that’s due to the type of panel there, and the fact that individual pixels can be turned off when need be. Nothing is going to compete with OLED black levels. Though QNED can get very close.

Confusing huh? Yeah, we thought so. At CES 2021. Samsung also announced Neo QLED, which sounds similar to the QNED that LG announced.

It is similar too, Neo QLED is a transmissive MiniLED technology. And the Q still stands for Quantum. With Neo QLED, Samsung is relating it to the Quantum Matrix Technology and its picture optimizing Neo Quantum Processor. Samsung promises 100% reproduction of the DCI-P3 color space.

What makes the Neo QLED technology stand out is is the smaller backlight LEDs. Much like QNED. These new Quantum Mini LED is 1/40 the height of its previous design. This allows for a major increase in density of these backlights. In order to make them this much smaller, Samsung had to remove the packaging and lens from the LED chip, replacing it with a new ultra-thin micro layer to guide the LED light.

There are some other Neo QLED features available, like 12-bit steps of LED brightness control for local dimming, although this doesn’t necessarily mean the panel supports 12-bit HDR content.

The biggest difference is actually a pretty subtle one. And that’s the LCD color filter being used between LG and Samsung for their new TVs. LG hasn’t disclosed which panel layer it is using on its QNED TVs, it is likely going to use IPS based on previous releases.

While Samsung has already started to transition to Vertically Aligned LCD. This delivers better contrast than traditional IPS at the expense of narrower viewing angles. The HDR contrast versus viewing angle compromise could be the biggest difference that customers would see, between the two.

Fundamentally, both of these technologies are the same. But, like with any technology, there are changes between the hardware and software here. Which is going to make these TVs look different compared to each other.

But both of these are technologies to keep an eye on for 2021. And moving forward.

Is this the future of TVs?

But don’t expect every TV out there to use “QNED”. Instead, TV makers will use MiniLED – some of which are already doing so. As QNED is mostly specific to LG TVs.

QNED is a pretty impressive iteration on LCD. And we can’t wait to see some form of QNED make its way into more TVs.

It’ll still be a few years before QNED is able to take on OLED TVs that are on the market, but it likely won’t take that long. Once people see the differences. Especially with QNED being cheaper.

What QNED TVs can I buy?

LG has announced four QNED TVs so far, at CES 2021. They are all under the NanoCell branding. 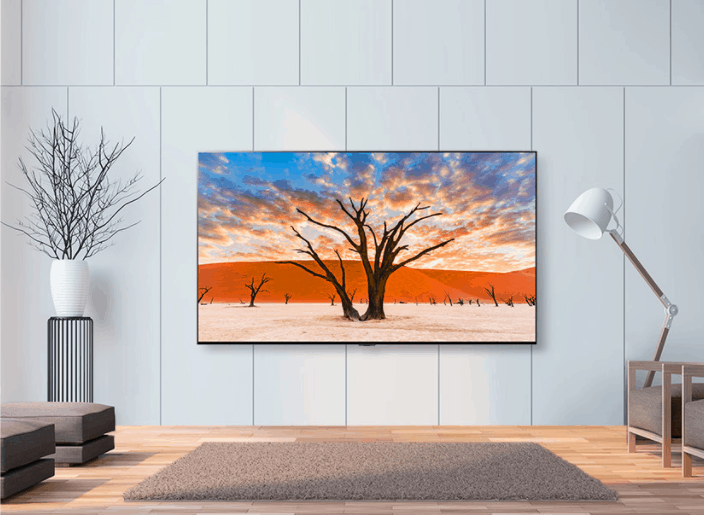 QNED99 and QNED95 are 8K TVs, while the other two are 4K TVs. All of these are available in 65 and 75-inches. While there is a 86-inch version available for the two 8K models.

The 8K models use the new a9 Gen 4 AI chip, while the 4K models use a slightly mid-range a7 Gen 4 AI processor inside. That mostly comes down to the resolution though, as an 8K TV needs a better processor for processing 8K footage and images.

LG, unfortunately, has not released pricing yet. But it has told us that QNED is going to sit between its traditional NanoCell LCD TVs and its OLED TVs. So we’d expect around $1,000 for the cheapest QNED model. And likely going up to $3,000 for the larger models. As for the 8K models, it’s tough to say what those prices will be. As 8K is still pretty pricey.

This is just the first round of QNED TVs, so expect prices to come down in the coming years as newer models are announced and released. As well as the technology getting cheaper.