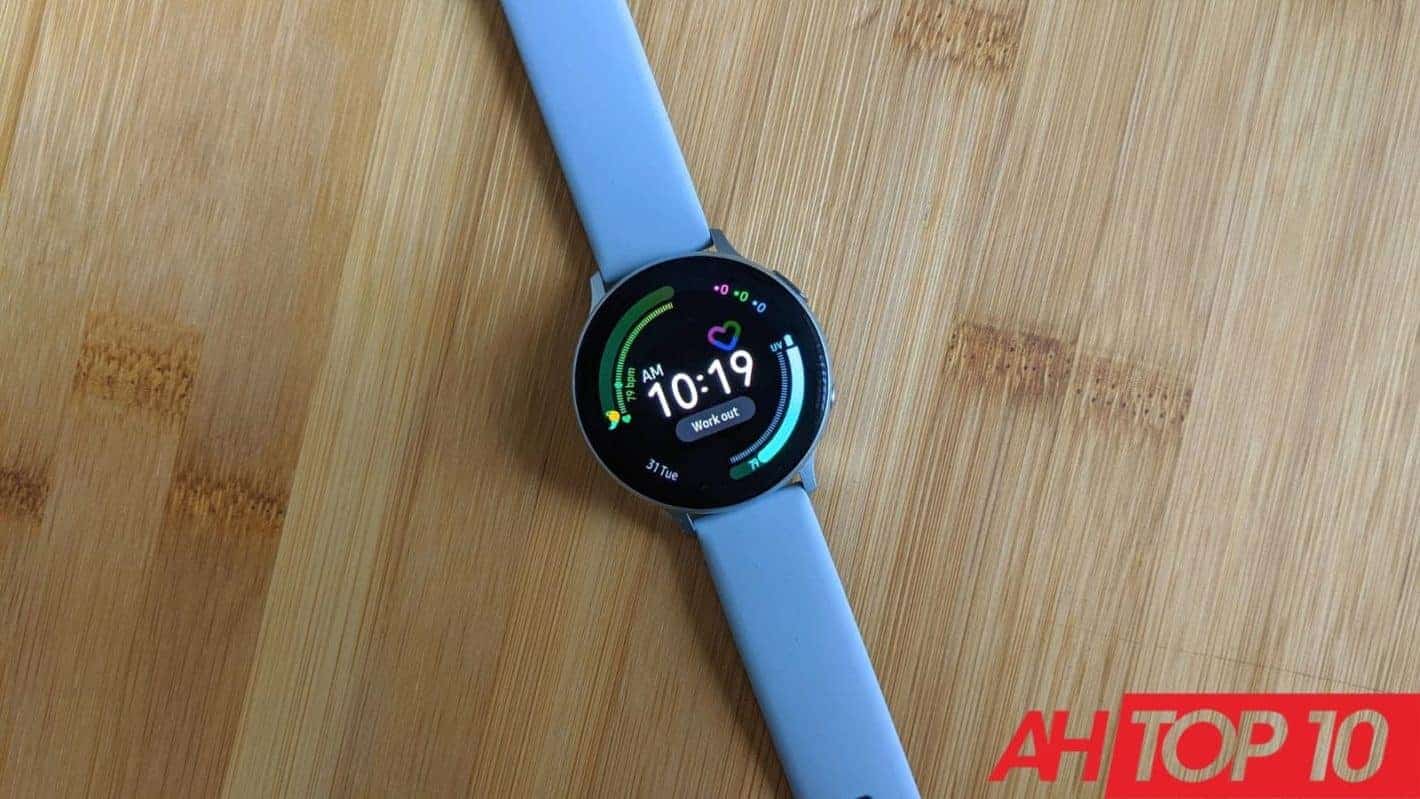 Whether it's to upgrade from your current device or finally start that workout program you've been meaning to get into, a new fitness tracker can help you stay on target and these are some of the best trackers you can find.

With the holidays now over, a fitness tracker might be just the ticket for staying in or getting back into shape. They're designed to help you reach your fitness goals, and most of them do a pretty good job at it.

There are tons of fitness trackers out there though. Amazon is swimming in them. How do you separate the ones you should consider from the ones that aren't worth your time?

That's what this guide is here to help you do. We've picked the best fitness trackers to help you meet your fitness goals in 2020.

Below you'll find a short summary on the list of top 10 best fitness trackers we've picked for June 2020.

Just in time for the new year and all those new fitness goals. The summary includes the cost of each tracker, and where to buy if you're short on time.

Below the summary you'll find a slightly longer description of each item along with the where to buy links.

Samsung's Galaxy Fit is perfect for any Samsung device user. Samsung wearables will work with basically any Android device. So it doesn't need to be from Samsung.

However they do tend to work a little better with Samsung phones. That being said the Galaxy Fit is also a great buy at its price. Because it can now be picked up for just $79, so it's a great value. Especially if you've already spent quite a bit on a new Samsung phone.

With the Galaxy Fit you're getting a full color AMOLED display for showcasing all of your stats. From steps to calories burned and more.

It also comes with a swim-ready design and Samsung says it features "military-grade" durability. What this means is that it should be more than capable of taking a beating. To some degree. You probably shouldn't go out of you way to test how durable it is.

But should you accidentally drop it or occasionally bang it up against stuff, you won't have to worry. The best feature of course is the automatic fitness tracking. Simply slip the tracker onto your wrist and start your activities and it'll track things like walking, running, cycling, and more.

The best fitness tracker for most users

Samsung's Galaxy Fit is a great option for a tracker, but the Inspire HR is easily the best option for the majority of users.

It's low $79 price point and various style options mean it will likely appeal to a larger group of people. Not to mention it pairs with the best health and fitness app and dashboard of anything out there.

Hands down Fitbit's companion apps are the best, with deep insights into your health and fitness goals, a robust community of other users for motivation, and more.

The Inspire HR also comes with most of the features you'll find in some of Fitbit's more expensive devices, but at a lower price. Fitbit wanted a more accessible option for consumers, and this is it.

The best tracker for Fitbit fans that want a smartwatch

If the Fitbit Inspire HR is the best tracker for most users, then the Fitbit Versa 2 is the best option for anyone who wants to go with a Fitbit device but get something with more features wrapped up in a smartwatch package.

The Versa 2 is filled with capable functionality and it comes with a nice, bright, big display for interaction. This is of course a touch screen, though it does have one button on the side as well.

It also comes with Alexa built-in, meaning you get smart assistant interaction by voice similar to Google Assistant on Wear OS watches.

The watch will track your heart rate 24/7, track your steps, distance, calories burned, floors climbed, active minutes, and hourly activity. And it comes with a 6-day battery so you don't have to charge it every night.

The Garmin Vivosmart 4 is a little bit of an older tracker as it was officially released in 2018, but when it comes to Garmin this is the latest tracker the company has released that isn't a full-on watch.

It's also still a very capable tracker with all the necessary fitness-related features you'd need for keeping track of your exercise.

It comes with built-in Pulse OX sensor as well so you can measure your blood oxygen saturation levels, if that's a feature you were looking for.

Garmin offers this device in a range of different color options just in case you wanted something other than the standard black model. And as long as you're not using the Pulse OX sensor, the battery should last up to seven days.

The best tracker if you want a smartwatch

In the market for a smartwatch that has fitness tracker features? Look no further than the Galaxy Watch Active 2.

We thought it was a great smartwatch and consider it the only smartwatch you should buy. If you want the best, Samsung has you covered.

From a simple and sleek design to meaningful and functional features like advanced sleep tracking and the touch bezel, the Galaxy Watch Active 2 is the perfect companion to anyone who wants to get into shape.

It can measure your stress levels too. Which is important if you have a busier life with a hectic schedule. Not to mention it's comfortable. And it comes in a few different color options, with the added benefit of swapping out your band for something more stylish if the event calls for it.

Want to swap out your watch face? It can do that too. You can even take pictures and easily add those as your custom watch face through the companion app.

Garmin has more than a few fitness trackers and smartwatches available, and the Forerunner 245 Music is one that you should keep an eye on if you use Amazon Music to stream your tunes.

More than a few of Garmin's devices are now compatible with Amazon Music, a feature which it introduced back in 2019. The Forerunner 245 Music however is a good mix of value and features.

Since it's compatible with Amazon Music you can easily use the watch to sync up to your Amazon Music playlists and track libraries. Only Garmin's watches have integration with this particular service, while most others focus on Spotify, Google Play Music and others.

Aside from the Amazon Music support the watch also features optional guided training plans from Garmin Coach, as well as GPS capabilities, and even a seven-day battery life.

The best tracker for multisport

Most of the trackers on here are priced at a relatively affordable cost. None of those are the Fenix 6 series from Garmin though.

This is a premium multisport GPS watch and is the tracker to buy if you want the best of the best with nearly every feature under the sun.

The Fenix 6 comes in a series of different models, each having something a little different. They're relatively close in features though.

For example all of them offer Garmin Pay so you can make mobile payments, Meanwhile the Fenix 6 Pro Solar allows you to charge the battery with solar energy. Meaning you can charge it as you wear it outside during exercises and adventures. So long as there's enough sun around to provide the energy it needs.

The Fenix 6 series also offers mapping features, music integration, and PacePro technology for grade-adjusted pace guidance during your runs and outings. You can track your heart rate and measure your blood oxygen saturation levels too thanks to the integrated PulseOX and Heart Rate sensors.

The price for this one is steep. But if you're serious about your fitness and want something that offers features that you won't find elsewhere, the Fenix 6 is where to look.

The best tracker for consumers on a budget

Fitness trackers aren't usually insanely expensive, but they can be a little more than anticipated. They don't have to be though. There are some trackers out there that offer excellent tracking features without breaking the bank.

The Xiaomi Mi Band 4 is the best of those budget trackers. It costs under $50 and you get things like full color AMOLED touch display that's easy to see in direct sunlight. Keep in mind you'll need the brightness up for this which will deplete the battery life faster, but the option is there.

The good news is that this has a battery life of up to 20 days. Which is much more than many trackers out there. And so far more than any tracker on this list as most are up to seven days.

It's got more than just good battery life though. It also has six different workout modes including treadmill, exercise, outdoor running, cycling, walking, and swimming. It'll also count your steps, your distance, and how many calories you burn while you exercise.

It comes in various color options too so you can pick the color that fits your style best. There's heart rate monitoring incorporated as well, just in case you wanted this feature. The Mi Band 4 might not be as advanced as some of the other options on here, but if what you want is a more simplistic tracker, you can't go wrong with the Mi Band 4, especially at this price.

The best tracker for guided training and nightly recharge insights

Most trackers will offer your basic fitness features like step counting and caloric burn, as well as a number of fitness or sport modes to track specific types of workouts.

The Polar Ignite does those things, but it takes a heavy approach to giving you guided training so you can make the most of your exercises.

The Daily Training Guide feature attempts to give you the best workouts for you, aimed at helping you reach your fitness goals.

Polar also knows that after a good workout you need a good night's sleep. This is where the Ignite's 'Nightly Recharge' feature comes in. It was designed to help you see deep insights about your recovery overnight.

With these insights you can make decisions about how to perform better in your workouts the following day.

The Ignite also comes with integrated GPS for speed, distance, and route tracking without need to connect a smartphone to it.

The Fitbit Charge 4 is the new upcoming tracker from Fitbit and while it doesn't really look much different from the Charge 3, it has a handful of notable improvements under the hood.

First, it has built-in GPS now. Which is a first for any Fitbit tracker and a boon for anyone wanting GPS features without having to link their phone up to the tracker.

It also comes with a new Active Zone Minutes feature. This targets your heart rate zones during exercise and praises you with alerts once you've hit those targets anytime during a workout. If you get additional Active Zone Minutes outside of exercise you'll get extra praise along with them.

It has a new Spotify app too, so if you do keep your phone on your person while you exercise, you can easily control your songs and playlists from the Charge 4.

The best part about all of the improvements is that you don't really lose anything from the Charge 3. You simply get more functionality for the same exact cost of $150. Making this tracker a steal and the best overall tracker.

Advertisement
Trusted By Millions
Independent, Expert Android News You Can Trust, Since 2010
Publishing More Android Than Anyone Else
36
Today
244
This Week
245
This Month
4990
This Year
106465
All Time
Advertisement