Skip to content
Advertisement
Trusted By Millions
Independent, Expert Android News You Can Trust, Since 2010
Publishing More Android Than Anyone Else
14
Today
49
This Week
286
This Month
5549
This Year
123097
All Time
Advertisement 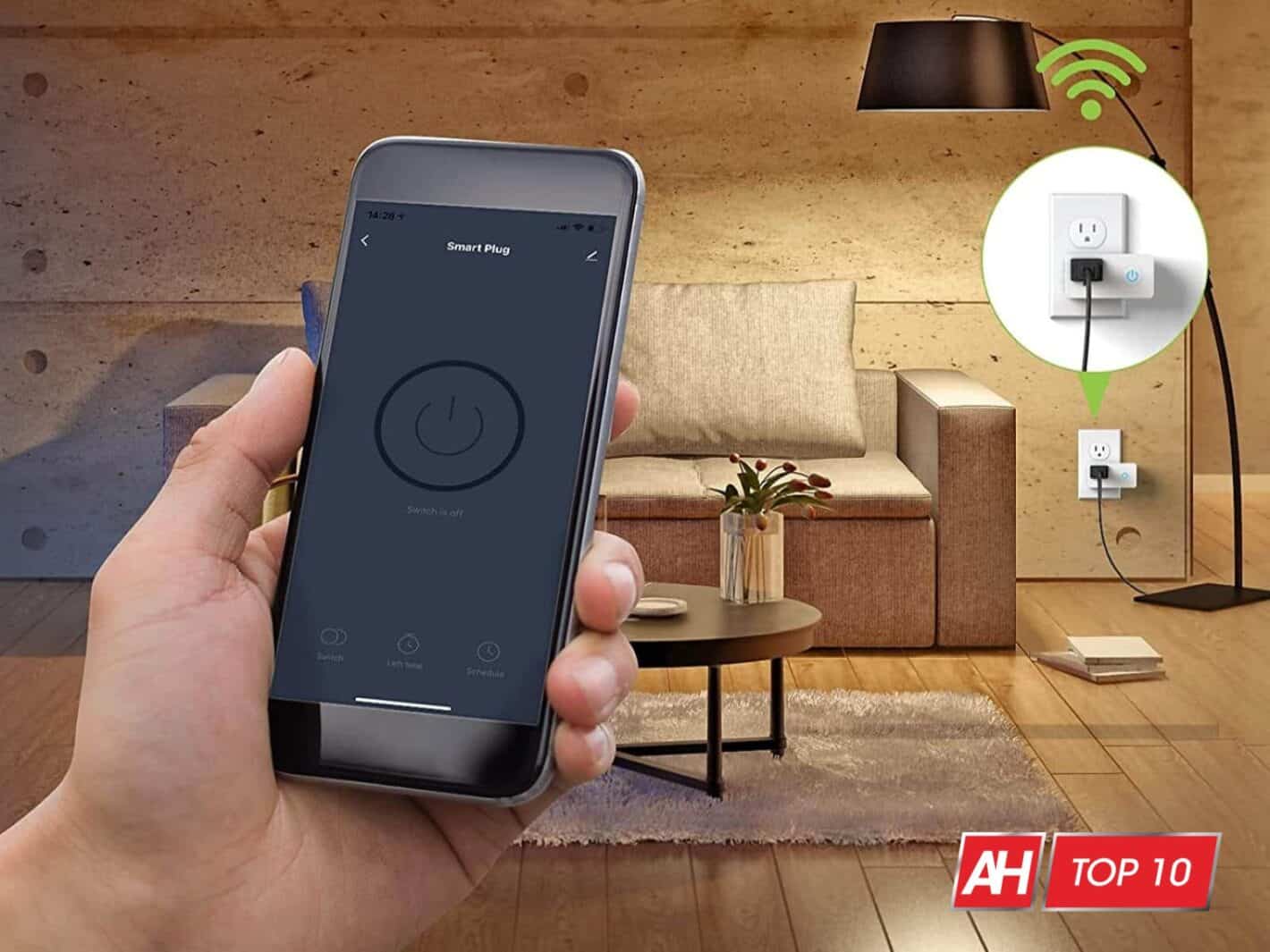 Home automation products have come a long way over the past several years but the introduction of smart plugs may be the best example of that.

For clarity, a smart plug is a smart home gadget that plugs into a standard outlet. And also has a standard outlet for other products to be plugged in. Then, the plug can be controlled via voice, app, or other scheduling and routines. In effect, the plug allows products such as lights, fans, one-switch coffee makers, and more to act like smart home products. Turning on or off via those control methods.

But how do you pick the best one? Let’s dive right into the best smart plugs currently available to buy.

Now, smart plugs are one of those gadget categories that are incredibly broad and difficult to narrow down. So picking out the top devices is a non-menial task, to say the least. Although there are some differentiating factors worth considering.

That’s only hampered further by the fact that not every smart plug will support every smart home ecosystem, even among the best devices. So what you buy will ultimately depend almost as much on whether you’re using Google Home and Assistant — typically branded with “Nest” –, Amazon’s Alexa, Apple HomeKit, or something else.

With that in mind, this list was built to showcase our picks for the best devices in any one of those areas. For both budget-friendly hardware and more expensive smart plugs. And it’s worth bearing in mind that many of these plugs will work with more than one ecosystem too. So that’s been noted in the longer descriptions below the summary.

Best smart plug on a budget for Google Home 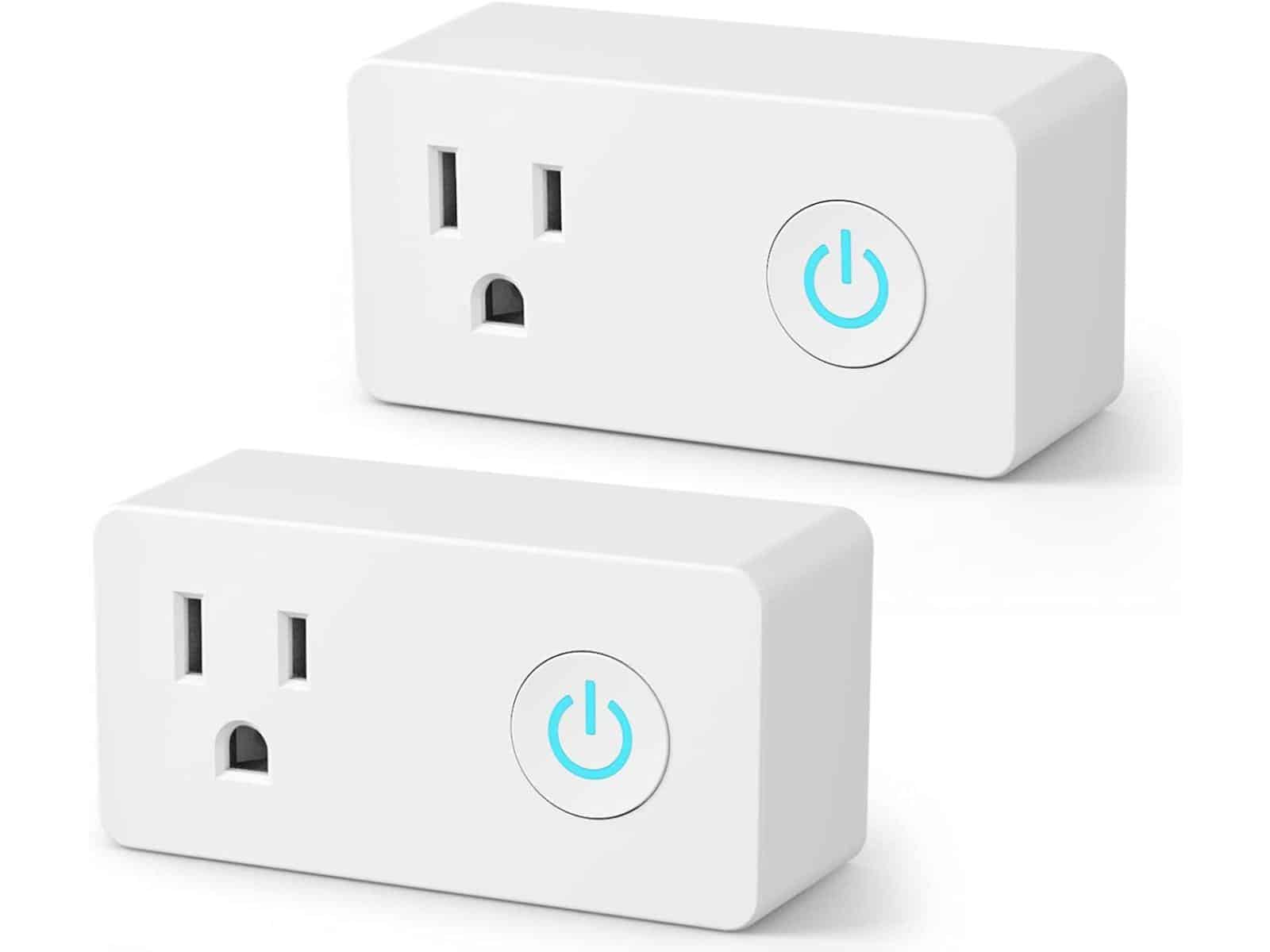 Starting out at just $16.99 for a two-pack and ranging up to just $26.99 for four, the BN-LINK WiFi Heavy Duty Smart Plug Outlet is easily going to be one of the best budget smart plugs for Google Home. But it isn’t just the small size that makes this plug worthwhile either.

Of course, with this BN-LINK smart plug, you’re going to get all of the features associated with Google Home and these types of devices. From voice-based controls to control at-a-distance. Including control from anywhere with intelligent routine scheduling and group controls. Without the need for a secondary control hub.

Additionally, the design of this particular plug makes it easier to use in some situations even without a voice command or app. Namely, this plug comes with an offset button. So it can be placed behind furniture that just doesn’t quite leave the plug free to access. And the control button itself will still be accessible.

Best smart plug on a budget for Amazon Alexa 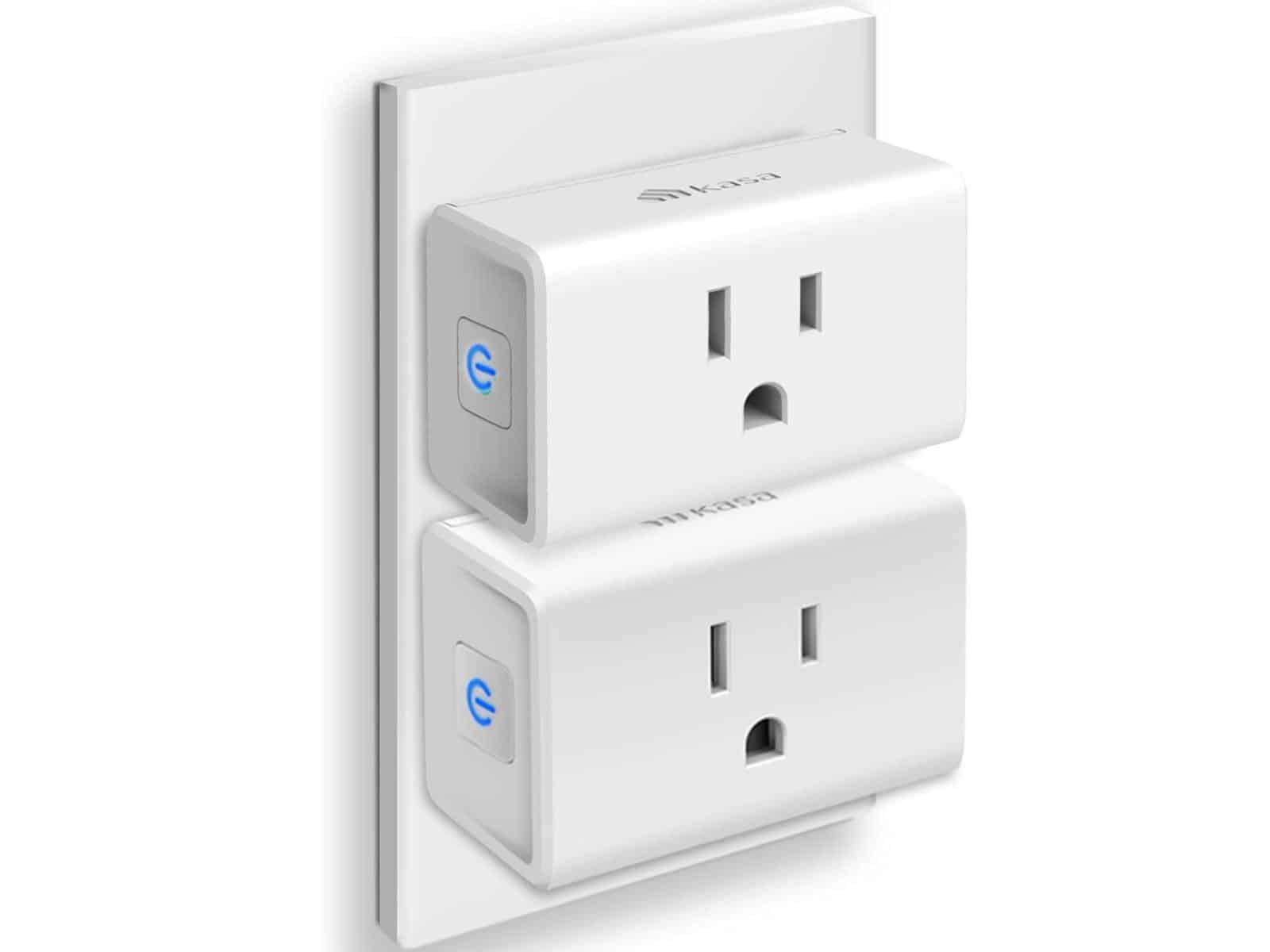 Starting out at $14.99 with two-pack bundles available from just under $16, TP-Link’s Kasa Smart Plug Ultra Mini is easily going to be among the best choices if you’re invested in the Amazon Alexa ecosystem. Not only does this work via voice with Alexa and Google Home or Nest ecosystem. It also works with those via voice commands. As well as control for any gadget that’s plugged in from anywhere using the Kasa app or routines.

Kasa Smart Plug Ultra Mini can be used with schedules. Such as for home appliances like a lamp, fans, lighting, and more. And set up is easy, with no central hub required, as is often the case with some devices.

Additionally, it packs support for the widely-lauded customization app IFTTT. So Kasa Smart Plug Ultra Mini can be programmed with more granularity and a wider array of triggers. That’s as compared to competing devices that only work with smart home assistants.

Best smart plug on a budget for Apple HomeKit 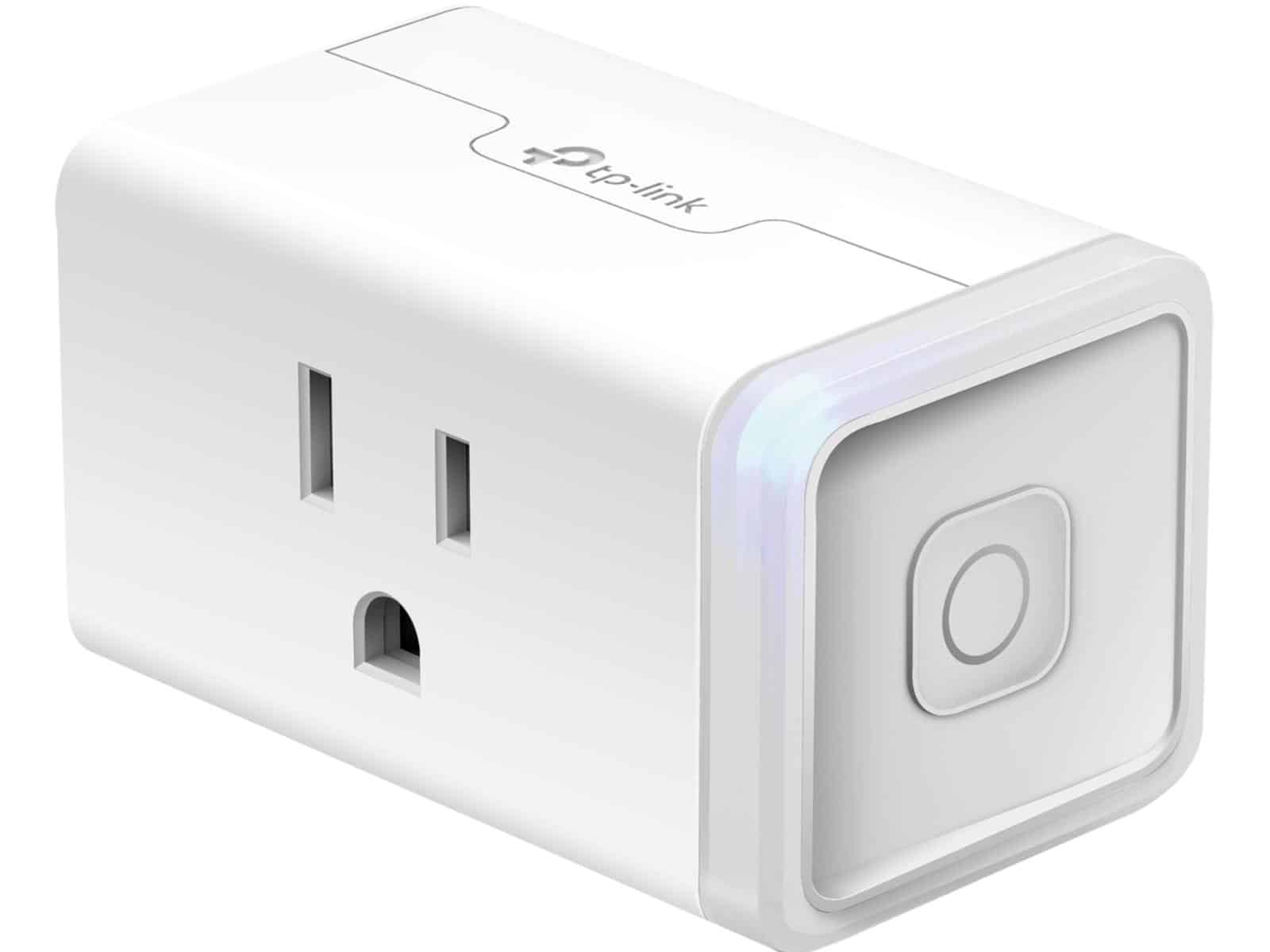 So it might be the best option on a budget if the plug mentioned above sounds appealing but you’re only using Apple HomeKit. Or if you’re looking for the best smart plug on a budget in a smart home that uses a combination of HomeKit and other ecosystems. 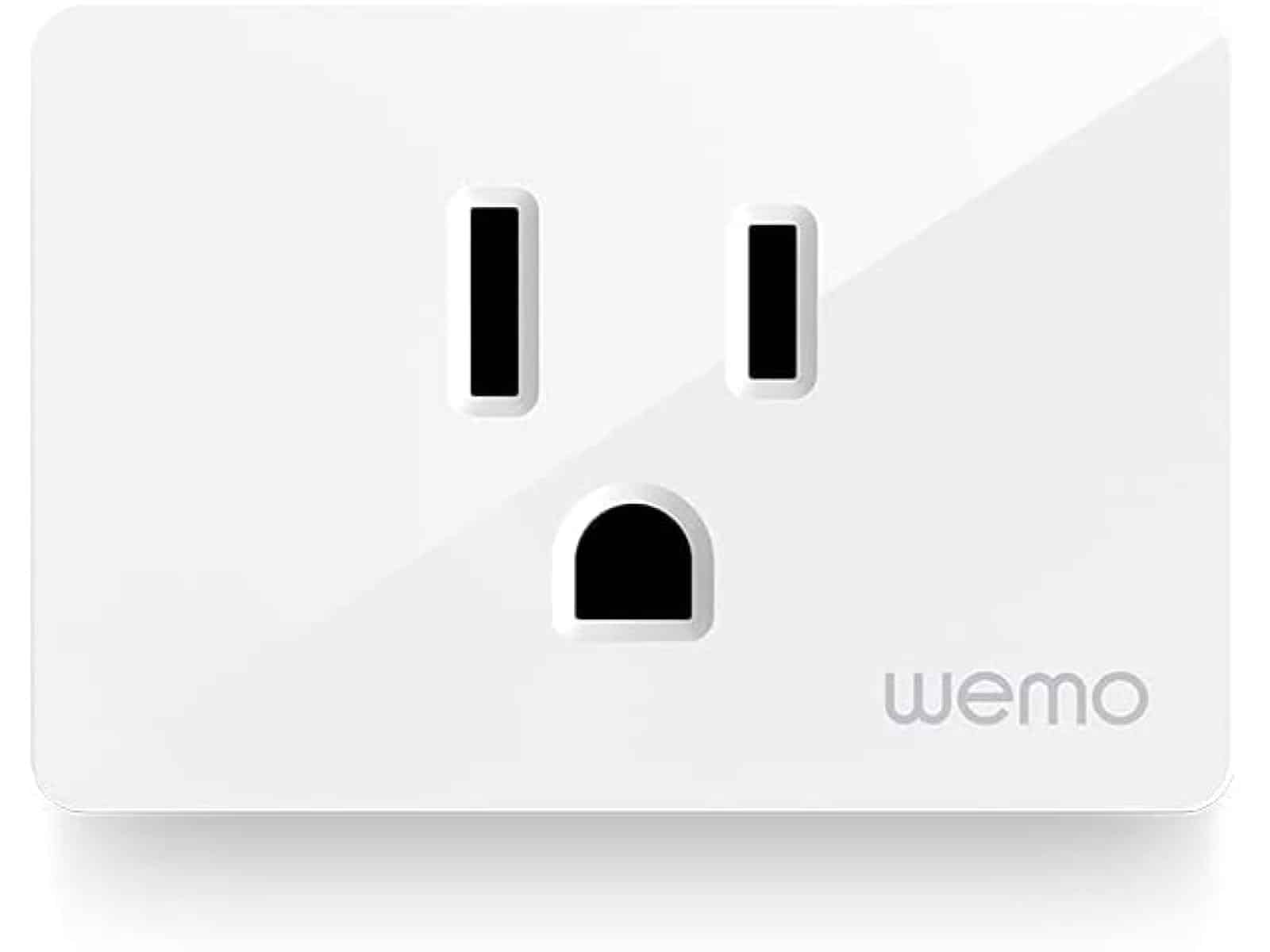 Starting out at just under $25, what sets the Wemo Mini Smart Plug apart from others in our list of the best plugs is straightforward. It isn’t the fact that it sports all of the features and safety features found on others on the list. Or that it comes in two sizes, with support for Thread, if you purchase the correct plug. That also means it has a similar offset version to the BN-LINK plug above.

What sets Wemo Mini Smart Plug apart from the competition is its wide support for smart home ecosystems. Namely, it supports Amazon Alexa, Google Home, and Apple HomeKit. All in a package that’s built to Wemo standards. Making this arguably the best of the plugs to choose for a mixed smart home ecosystem. 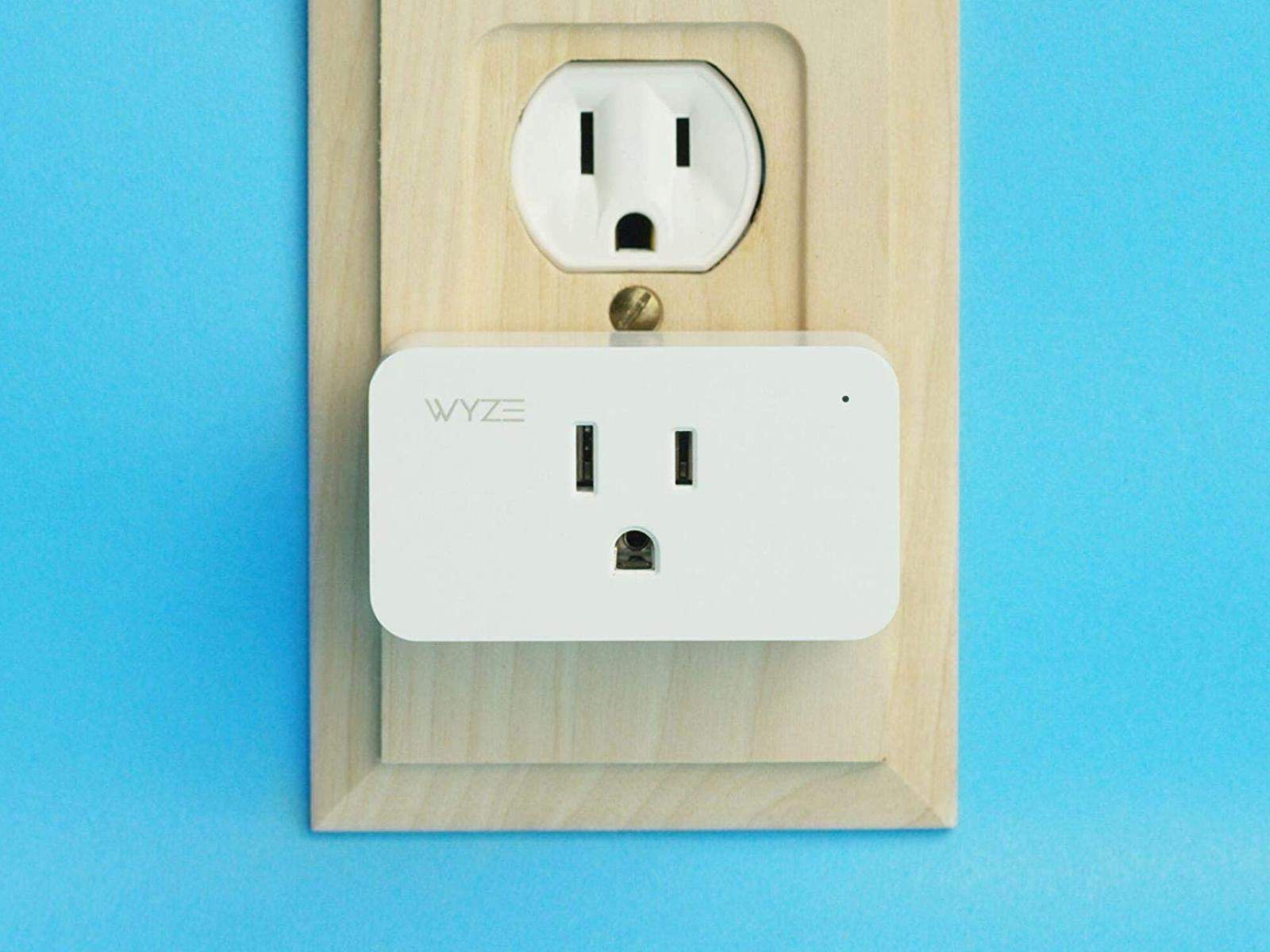 Wyze Plug is yet another of the best smart plugs you can buy for your smart home ecosystem for Google — and for Alexa. Not least of all, because it starts out at just $11.46. Although a two-pack will set you back nearly $20 and a four-pack nearly $40.

Setting aside the fact that all major features for a smart plug are supported, from routines to scheduling and Google Assistant voice controls, there’s one other factor to consider here. Namely, that Wyze Plug also comes in an outdoor variant. This means that for $17.98, you can get a plug with IP64 weather resistance. Moreover, the outdoor plug has two ports and both of those are independently controllable. 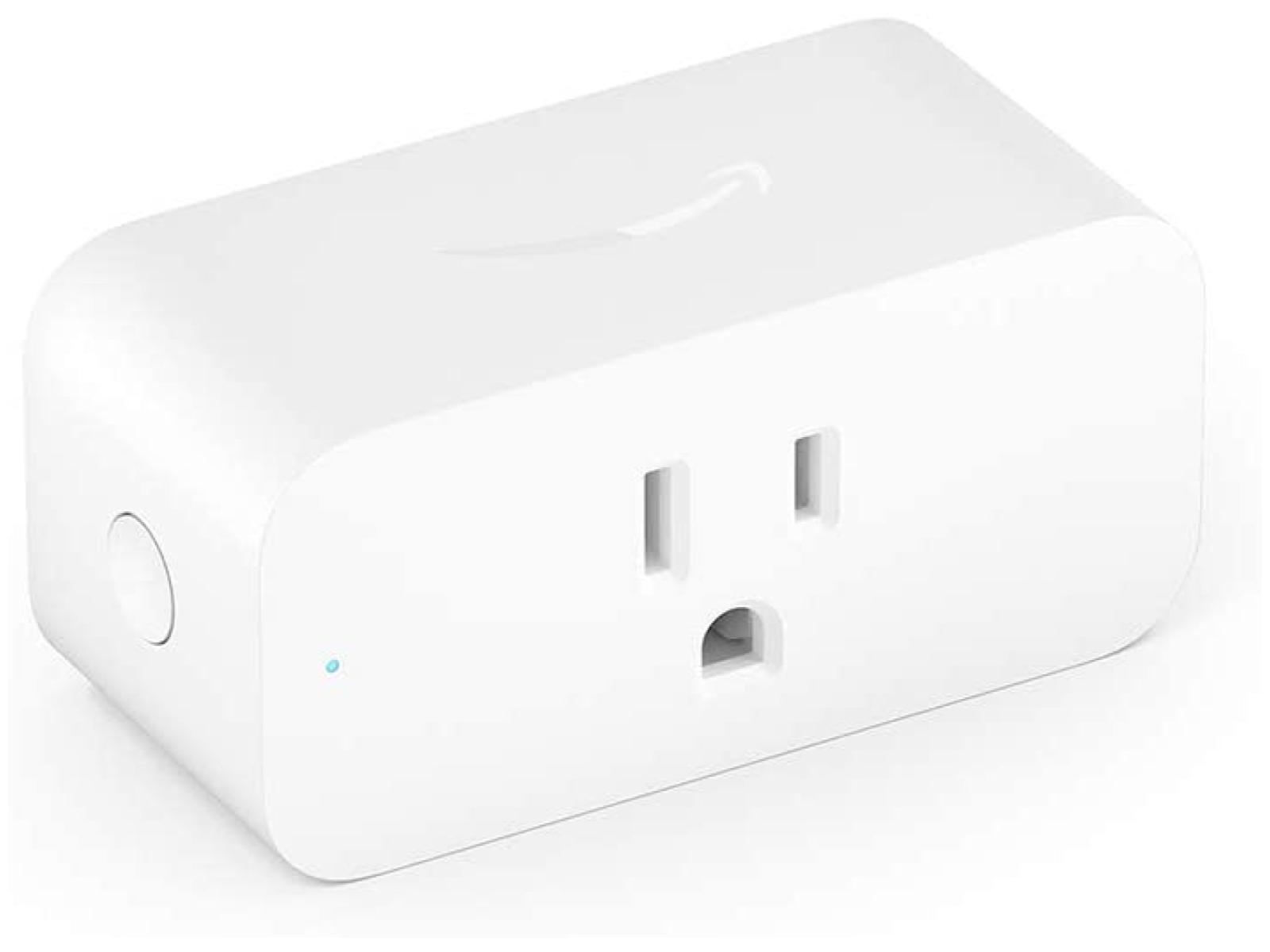 It goes without saying that buying a smart plug for your Amazon Alexa-powered smart home will be best accomplished by buying Amazon’s own Smart Plug. But you’re getting far more than the Amazon name with this gadget too. Apart from a minimal design.

To begin with, this $24.99 device is, like many others here, designed to leave room to continue using the other plug. It’s also effectively plug-and-play, at least for Alexa. All that’s required is for the plug to be plugged in and then discovered in the Amazon Alexa app. Then it adds routines-compatibility for scheduling any plugged-in device as well as voice controls via Alexa for the plug itself. All without requiring a hub to use. 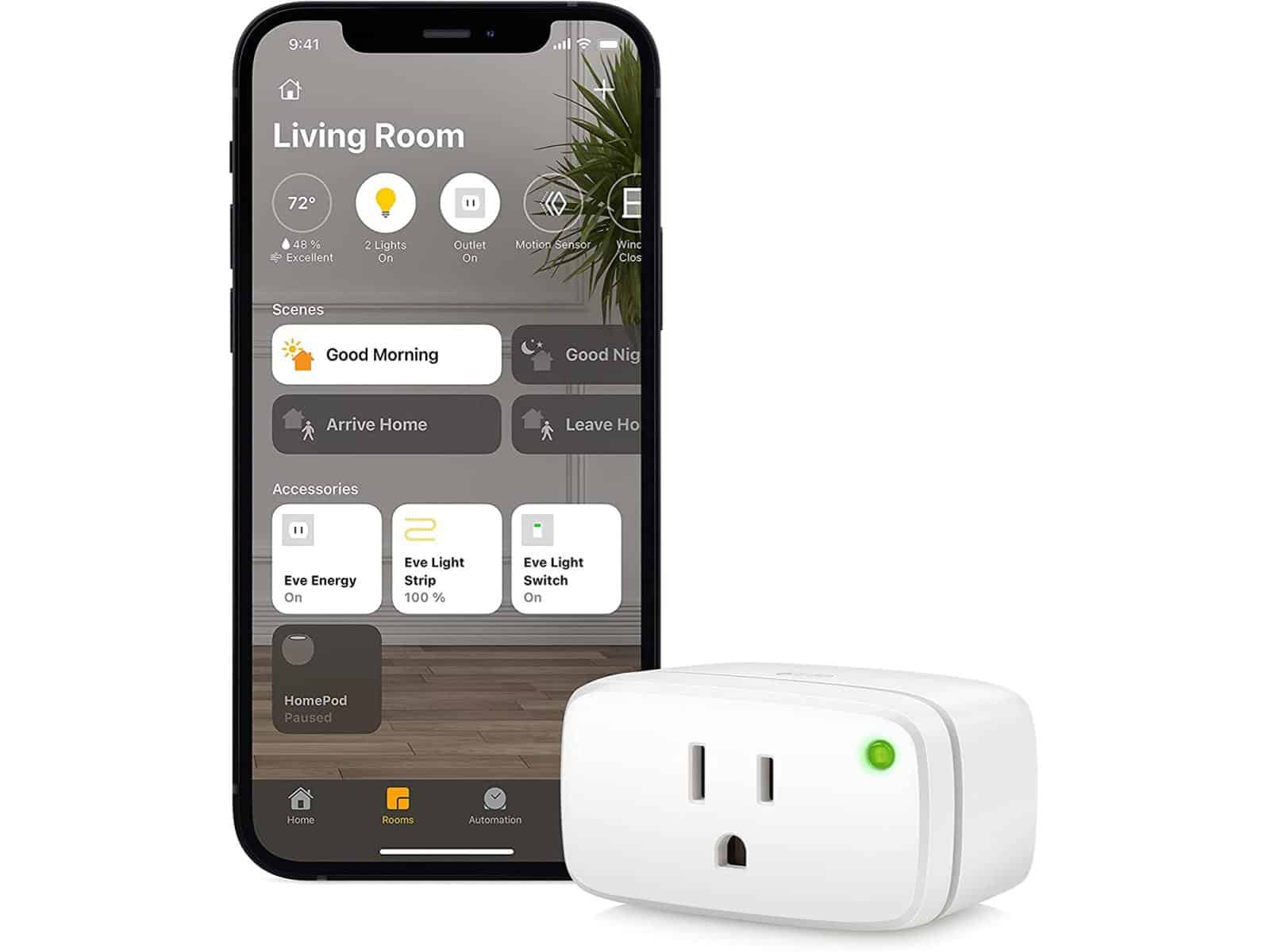 This smart plug also comes with the added benefit of being exclusive to Apple HomeKit. And it has the added benefit, for a higher cost, of monitoring your power consumption with helpful charts and breakdowns. Moreover, Eve supports Bluetooth and joins a Thread network automatically. And it can be set to work without reliance on any cloud networks. 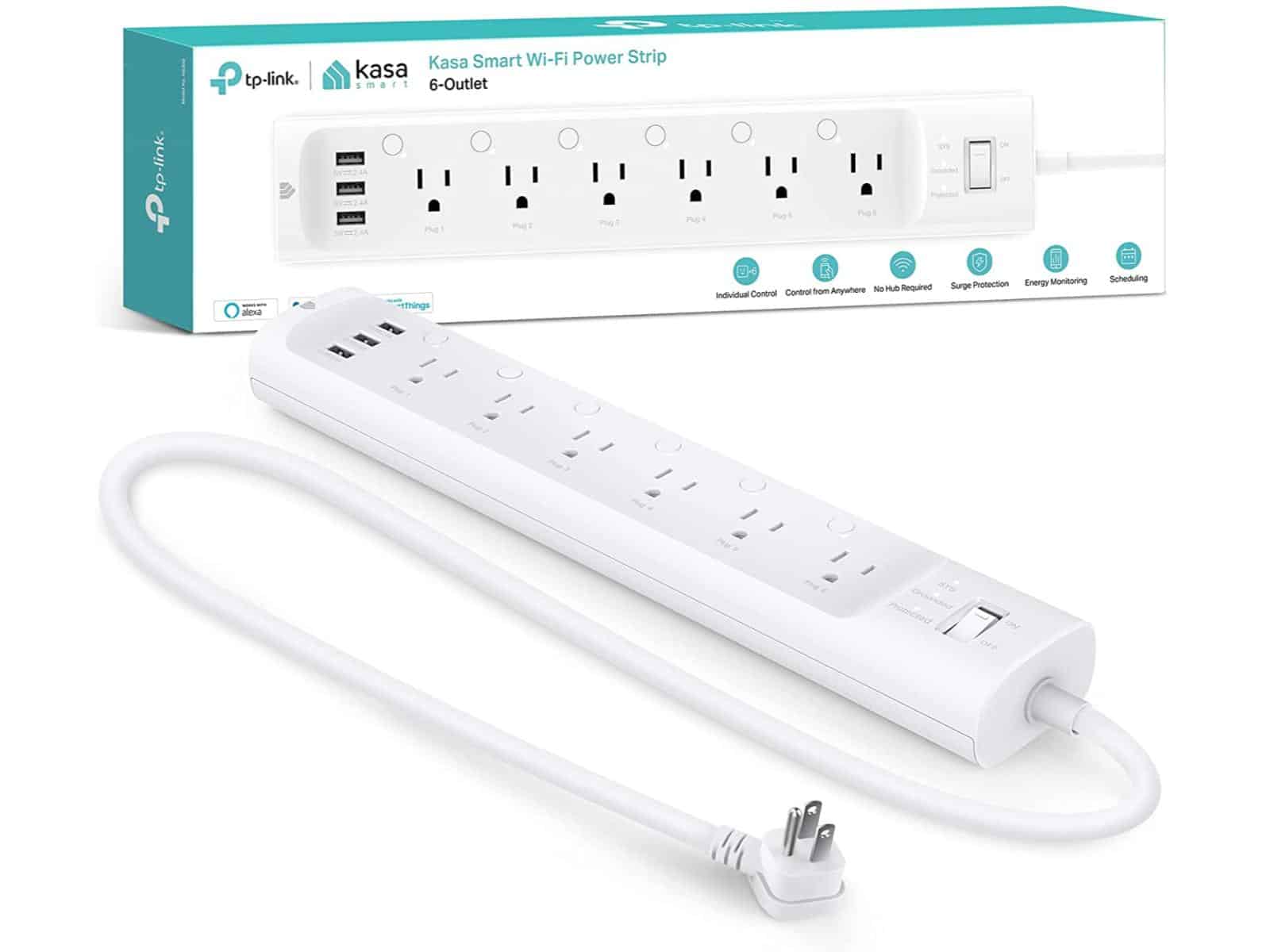 Our final pick for the best smart home plugs is one of a kind on this list because it’s a full-blown power strip. It comes at a higher price too. But that’s offset by its defining feature. Namely, each plug is controllable independently of others.

That means that for just under $60, you can connect up to six devices to Kasa Smart Plug Power Strip HS300. Not accounting for the additional three USB ports. And that each product or appliance plugged into the strip can be controlled individually. Whether that’s via voice command or routine.

Moreover, that’s complete with support for both Amazon Alexa and Google Home too. With no hub required and a similar set of power consumption monitoring features found in the above product from Eve.