Gaming now more than ever is quickly becoming an exciting hobby for people across the globe, and these are the best gaming headphones to help enhance those experiences.

Whether it’s on PC, mobile, or any of the various consoles, a pair of gaming headphones isn’t hard to find, even if you’re looking for the best pair you can get your hands on. The beauty of this accessory is that there are a ton of options and many of them are pretty good.

If you want to read a little more about each of our picks, you can view the actual longer list below the summary table. 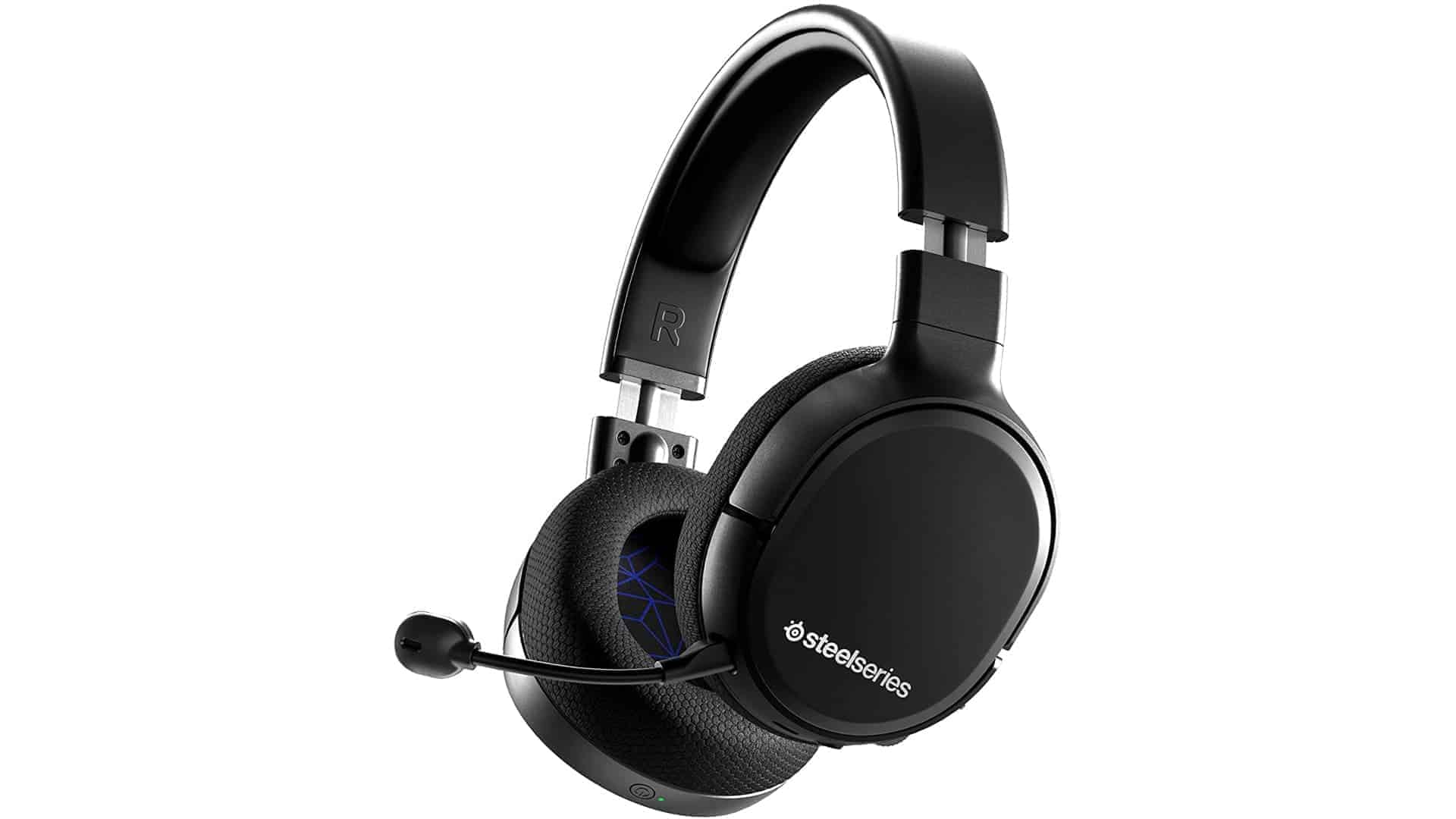 We’re kicking this list off with the Arctis 1 Wireless from SteelSeries because we think this is a fantastic headset. Not only for the quality that SteelSeries is known for but because the headset is extremely versatile.

It’ll work with multiple platforms, including PC and PS4. It’ll also work with the Nintendo Switch and even your mobile device thanks to the small USB C dongle that you can plug into your phone or Switch.

Simply plug in the dongle and play games on the go with high-quality sound. SteelSeries even promises lossless audio. Another really awesome feature is the detachable ClearCast noise cancelling mic.

If you don’t plan to use voice chat, leave it unplugged. But if you end up playing something like Call of Duty Mobile, Destiny 2, Call of Duty Modern Warfare or any other game that benefits from team communication, insert the mic and have team chat ready to go.

Other notable features that deserve praise include the on-ear controls and the steel-reinforced headband. Across the board this is just a great headset with plenty of excellent features. And it doesn’t cost an arm and a leg.

If you want something wireless and quality-made but don’t want to spend hundreds, give the SteelSeries Arctis 1 Wireless a shot. 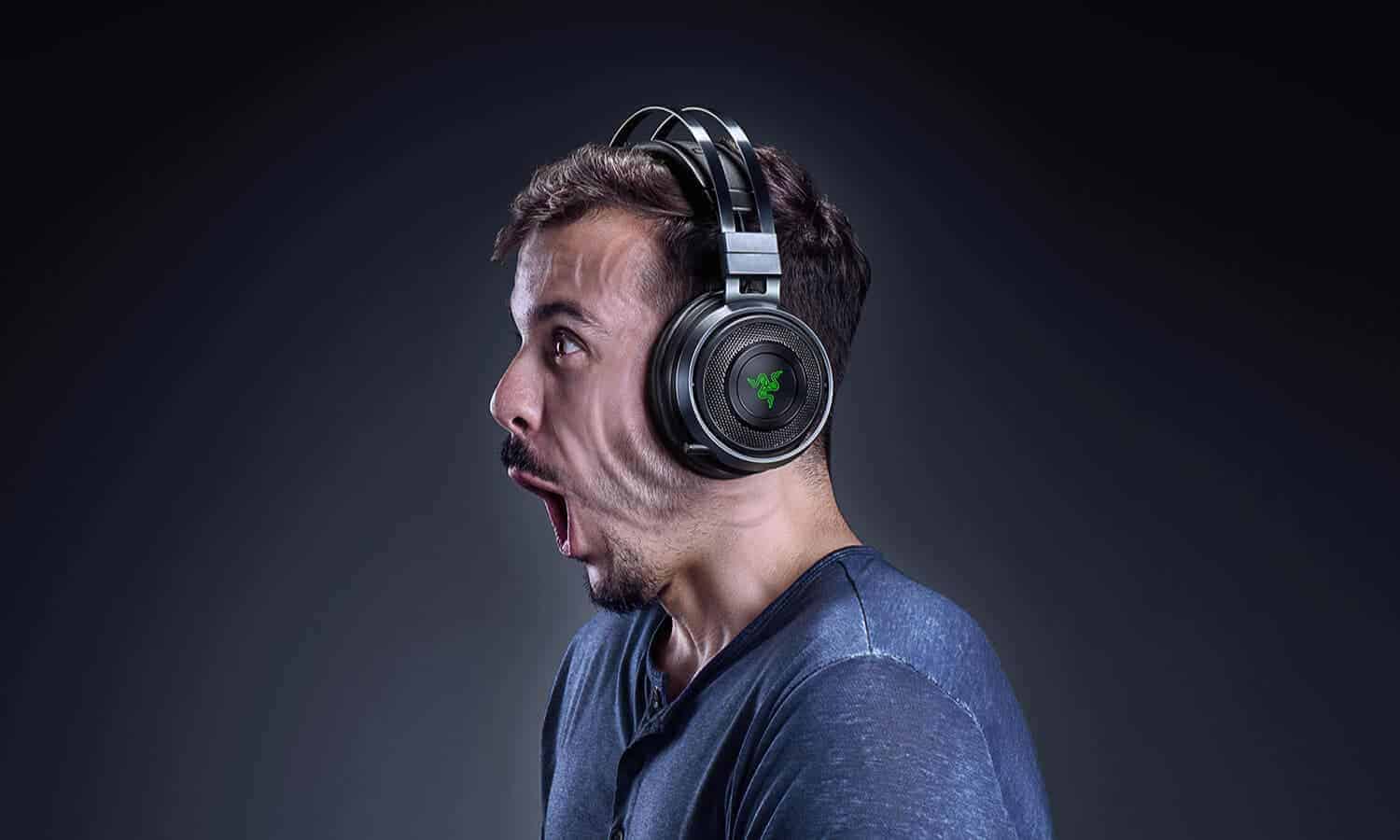 Razer’s Nari Ultimate is double the price of the Arctis 1 Wireless, but this is Razer so their products are already a little more expensive, and the Nari Ultimate is a really good wireless headset.

Right off the bat the biggest features hit you in the face. It comes with 7.1 surround sound and THX audio as well as haptic feedback, so you get a full spectrum of immersion in whatever you’re playing.

It has the signature retractable mic with a built-in mute button that you can find on multiple headsets from Razer. This makes it easy to hide the mic away when you don’t need it, and pull it back out when you do.

The soft cloth cushions on the ears have cooling gel in them for starters. Gaming headsets tend to stay on for quite a long time if you’re in a long session. And eventually you ears might get warm and start to sweat. The cooling gel aims to combat that by preventing heat buildup.

It’s also another multi-platform headset. The wireless will only work with PC and PS4. But, if you’re inclined to use it with the Xbox One, Nintendo Switch, or mobile devices, you can by plugging it in with via the 3.5mm plug.

It can even be wired with PC if you prefer. All your controls are on the ears as well so they’re easy to access. 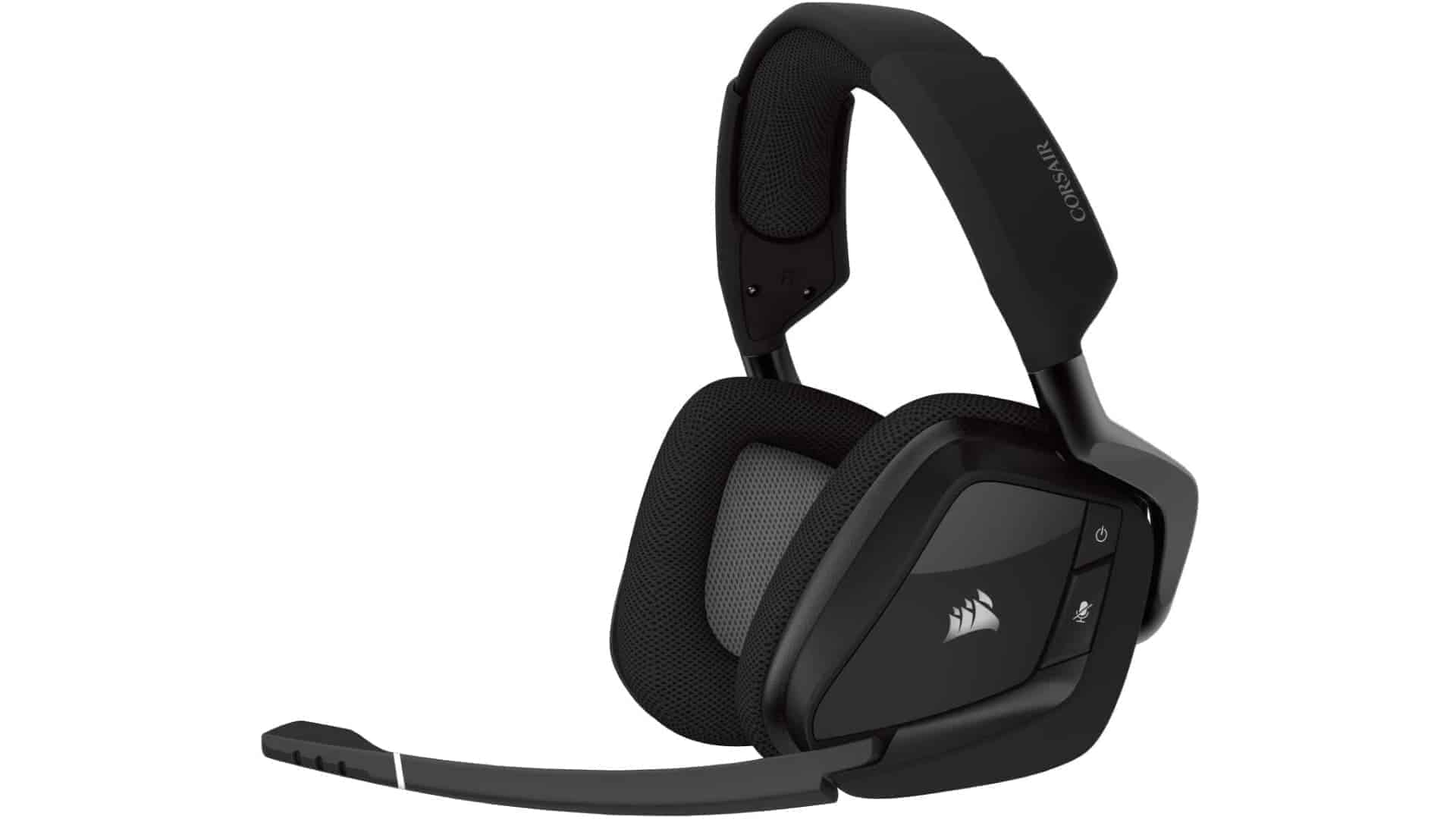 Corsair makes really good PC products and this headset is no exception. While I’m not necessarily too hot on the design, it’s a good headset that functions well.

It’s also wireless, has RGB lighting if you’re into that, and it comes in a matte black look which is rather sleek. If your setup is matte black, this will pair well with it.

Aside from the looks and style, the Void Pro offers on-ear volume and mic controls, a flip up boom mic, and Dolby 7.1 surround sound for immersive audio, which you’ll appreciate during the biggest gaming moments.

This one is a PC-only headset, so it doesn’t have the multi-platform appeal of the other two. It does however offer low latency audio and a 40ft range, so if you need to get up and go to the kitchen to grab a drink, you shouldn’t have issues as long as your kitchen isn’t beyond that range.

If there’s one annoyance about wireless headsets, it’s that some have to be removed before you leave the room because they’ll disconnect. If you’re in a chat and want to continue talking, you can’t. So if you’re looking for that capability these should do the trick. 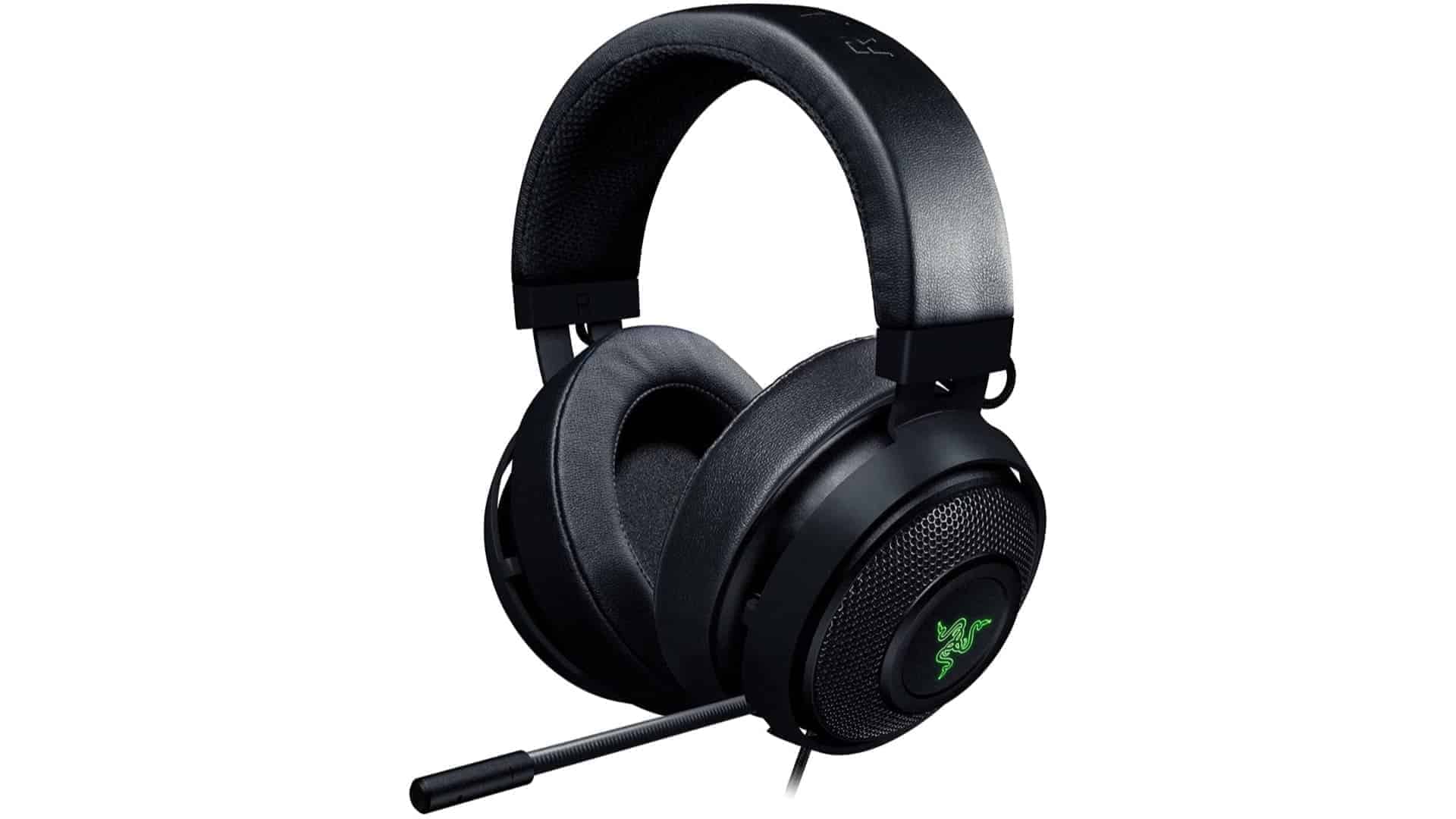 The Razer Kraken is one of Razer’s best-selling headsets which is why it’s been around for so long. Razer just keeps making better versions of it.

The Kraken 7.1 V2 was also my go-to headset for a couple of years because of how amazing it was. It’s wired, so you don’t have the freedom of a wireless option, but at $100 or less you can’t go wrong with this.

The retractable mic makes for easy storage when not in use, and of course the headset supports Chroma if you love your RGB. It also has 7.1 surround for immersive gaming audio, and it’s quite comfortable thanks to how light it is.

Really the best thing about it though is the metal band. It doesn’t feel cheap and like it will break if you accidentally bend it too much. Audio-wise it puts out some pretty good sound. It’s just an overall great headset option and another one that won’t cost you too much.

Sometimes you can even find it on sale for less than then standard $100 price tag. 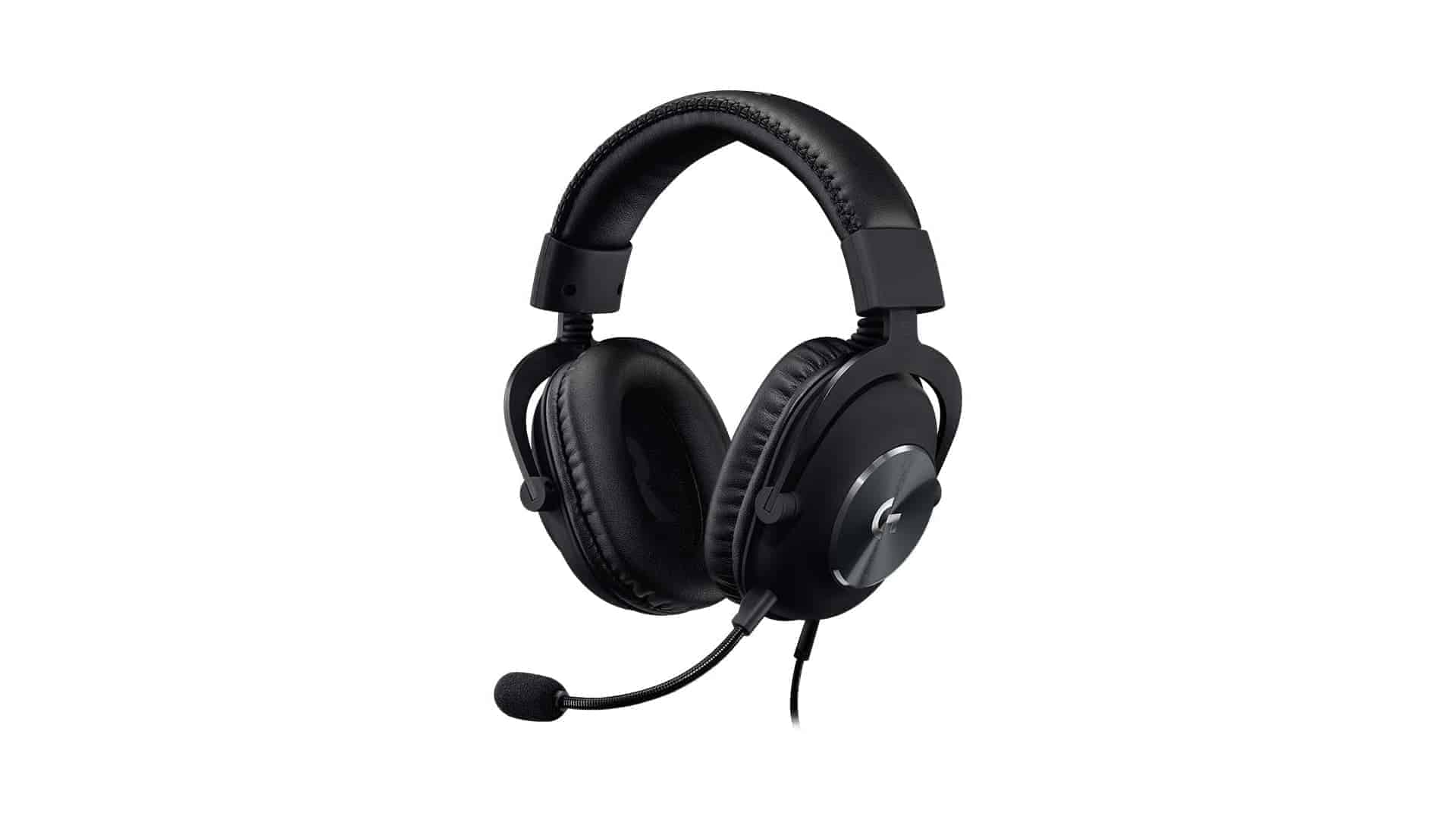 Logitech’s G line of PC accessories for gamers is a well-known brand and are some of the best you can get. They’re also not too expensive compared to some of the other high-end options.

The Logitech G Pro X is one of the best pairs of gaming headphones for a few reasons. But the biggest is probably the inclusion of the Blue Voice technology embedded in the mic.

Blue makes excellent makes microphones that are used by plenty of streamers. So Logitech adding this into the mic for its headset is ensuring gamers that their teammates will always hear them. Loud and clear.

The mic is detachable too, so you don’t always have to have it protruding from the earcup. If you’re not using it, take it off and store it. Beyond the mic quality, the headset is wired, has 7.1 object-based surround sound, and it has large 50mm drivers for big sound.

It doesn’t have any RGB lighting, but if you’re more concerned about the sound than anything else these are a really good option. Especially for the price. 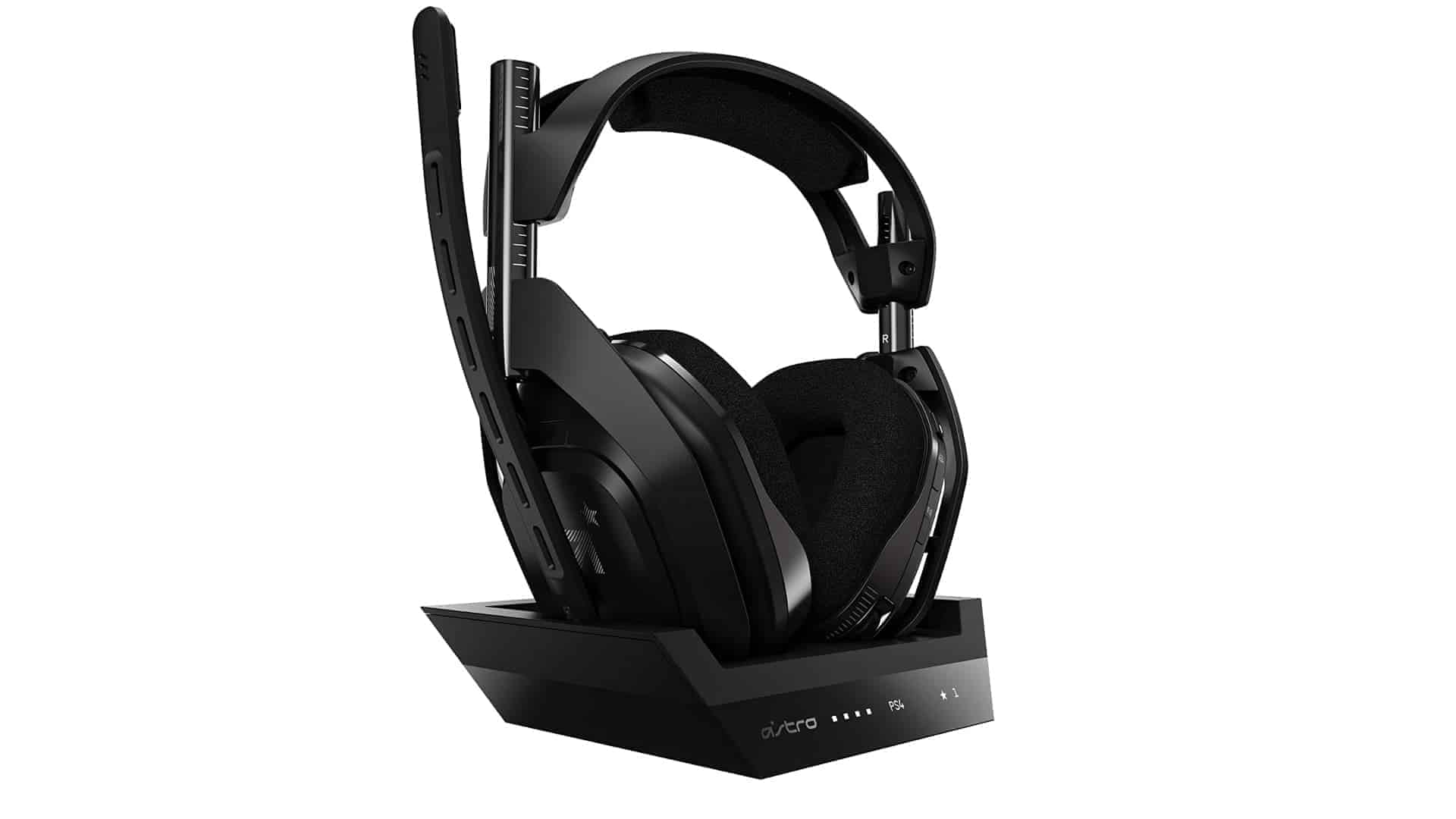 If you’re not opposed to spending a significant amount more, the Astro A50 are one of the more popular high-end models you can find.

They’re wireless, the earcups are big, comfortable, and you get a big flip up boom mic that makes it easy for others to hear you. You also get Dolby Audio, a rechargeable battery that lasts up to 15 hours and a base station to set the headphones on.

This keeps them in a designated spot that not only makes them easy to grab when you’re ready to game but they also look good among your setup.

With features like Voice Balance, you can control and adjust the volume of the game audio and chat audio individually so that you have just the right amount of sound for both. This is huge when you want to be able to hear your teammates but don’t want to miss out on the game audio. 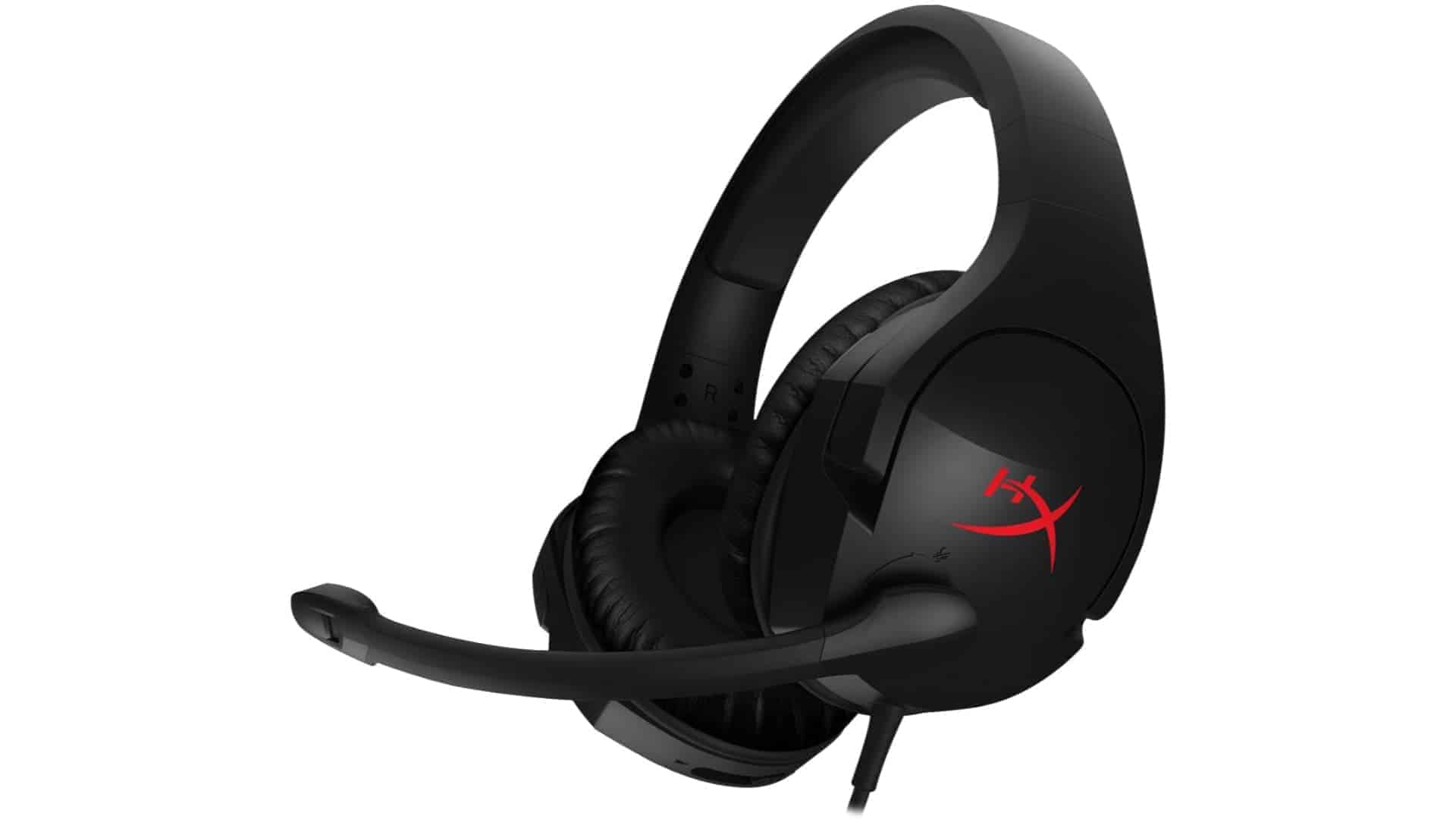 If you’re looking for a truly good value without compromising on features, the HyperX Cloud Stinger is one of the best pairs of gaming headphones you can find.

The best part? They only cost around $48. They have a fairly high rating on Amazon and there are over 6,100 ratings. That should tell you what actual consumers think about this headset.

It’s a no frills option that isn’t wireless, so if you want something wireless you will want to consider something else on this list. Or a wireless pair we may not have mentioned.

Wireless headsets do generally cost more though. Wireless aside, the HyperX Cloud Stinger is a great fit for anyone that has a focus on getting headphones with excellent quality sound. This headset ticks every box in that department.

It’s also comfortable to wear, has a big adjustable boom mic (which has the swivel to mute function), and it’s multi-platform. So for under $50 you can get a pair of gaming headphones that works with PC, PS4, Xbox One, Nintendo Switch, and mobile devices.

It’s the one headset for all your stuff. 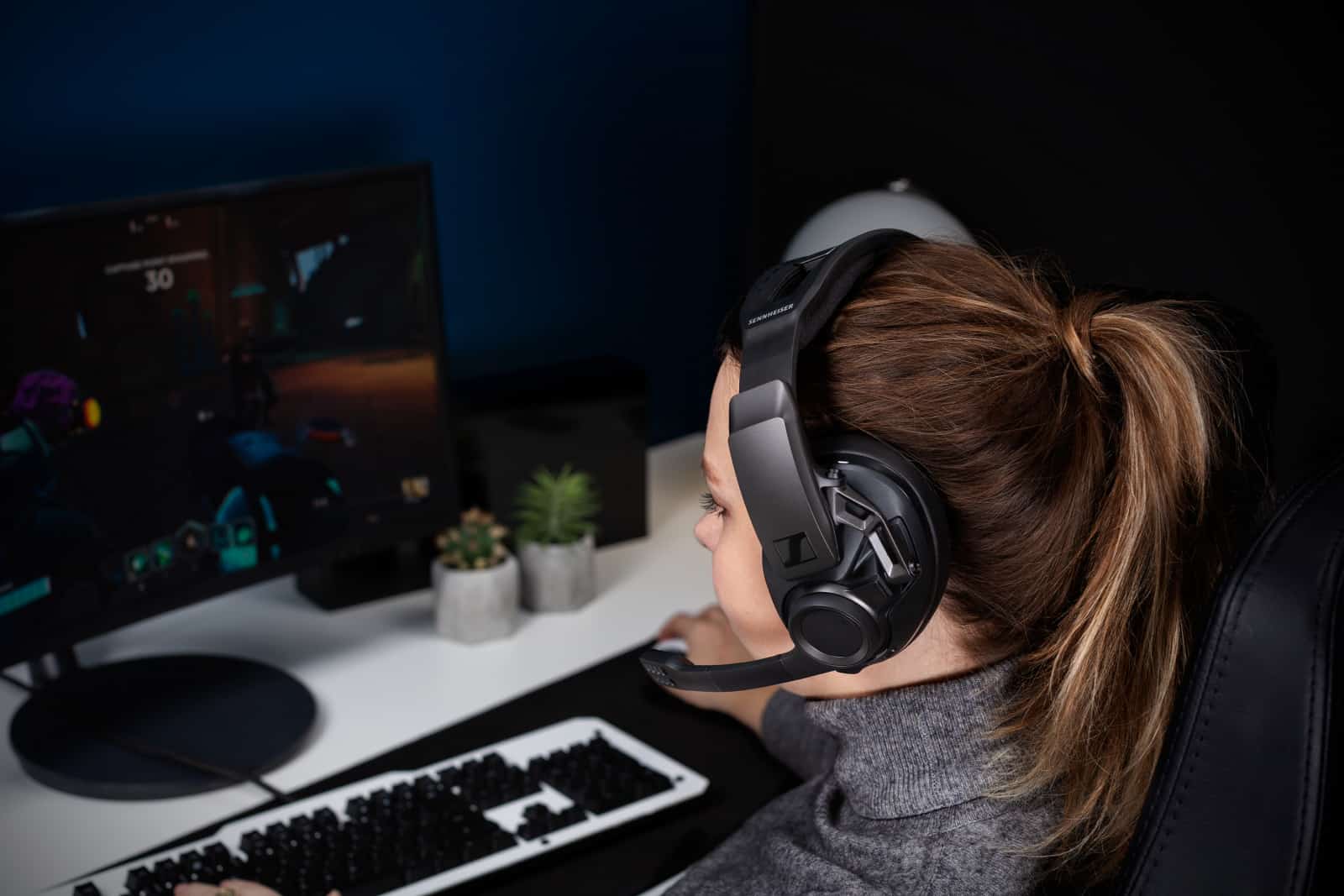 This is in large part because Sennheiser simply makes some of the best headphones in general. And the company has taken its expertise and applied it to gaming headphones.

The GSP 670 are a pricey pair of cans. But they’re worth every penny thanks to the wonderful sound quality and wireless setup.

You can flip up the boom mic to mute the chat too if you need to step away for a second. It also isolates noise extremely well, and the adjustable fit makes these some of the most comfortable headphones ever.

These are now my daily drivers and I’d be hard-pressed to find a pair I like more. 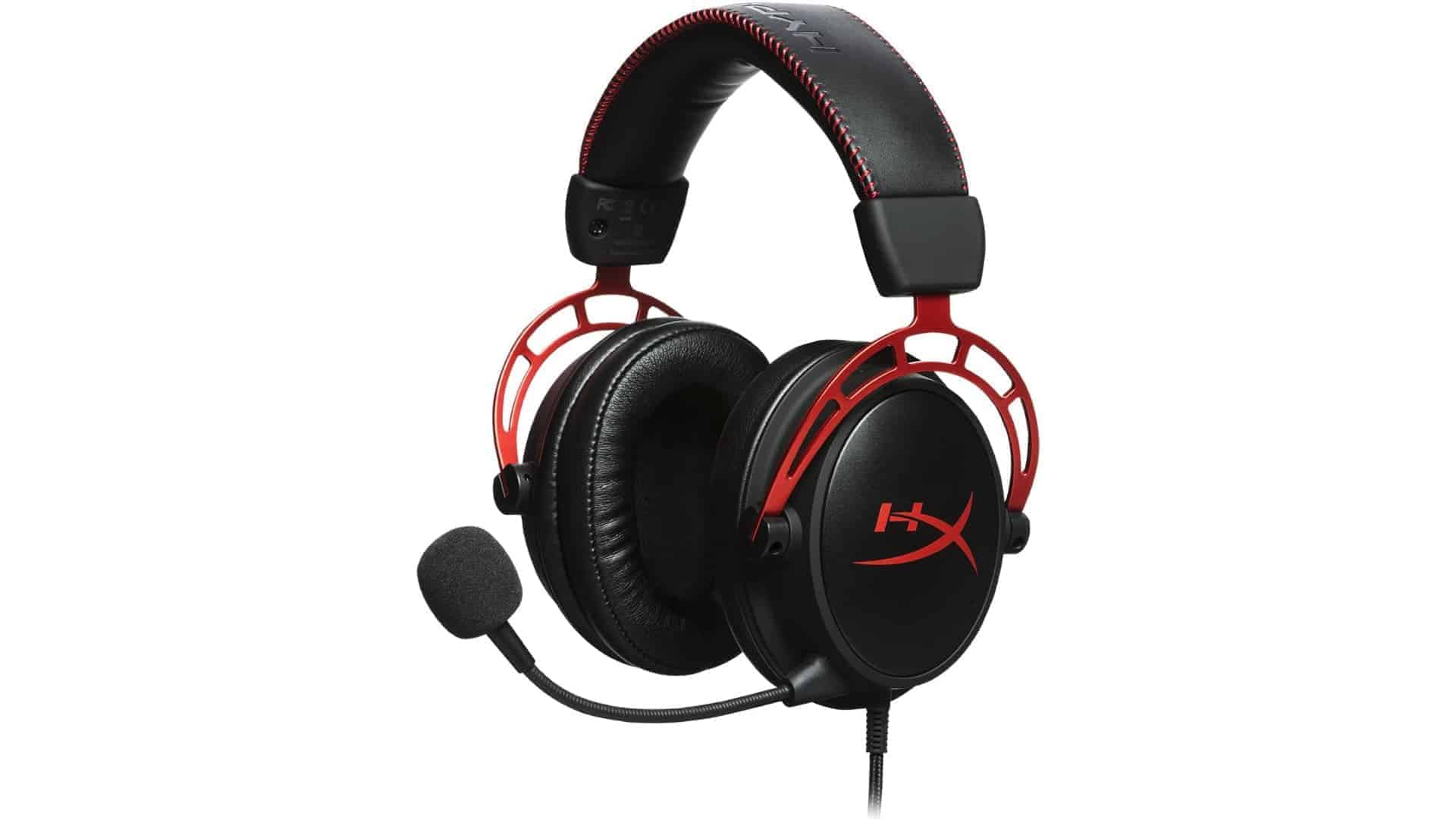 Take everything about the HyperX Cloud Stinger and upgrade it and that’s essentially what you have with the Cloud Alpha.

It’s got the same extreme comfort for longer gaming sessions and top-quality sound thanks to its dual chamber drivers. Where it takes a step up above the Cloud Stinger is the detachable braided in-line cable that you use to plug the headset into your devices.

The Cloud Alpha is double the cost at $100, but you get a more durable headset (it has an aluminum frame) and better features. This headset is multi-platform too like many of the ones we picked, and can be used with PC, PS4, Xbox One, Nintendo Switch, and mobile devices. 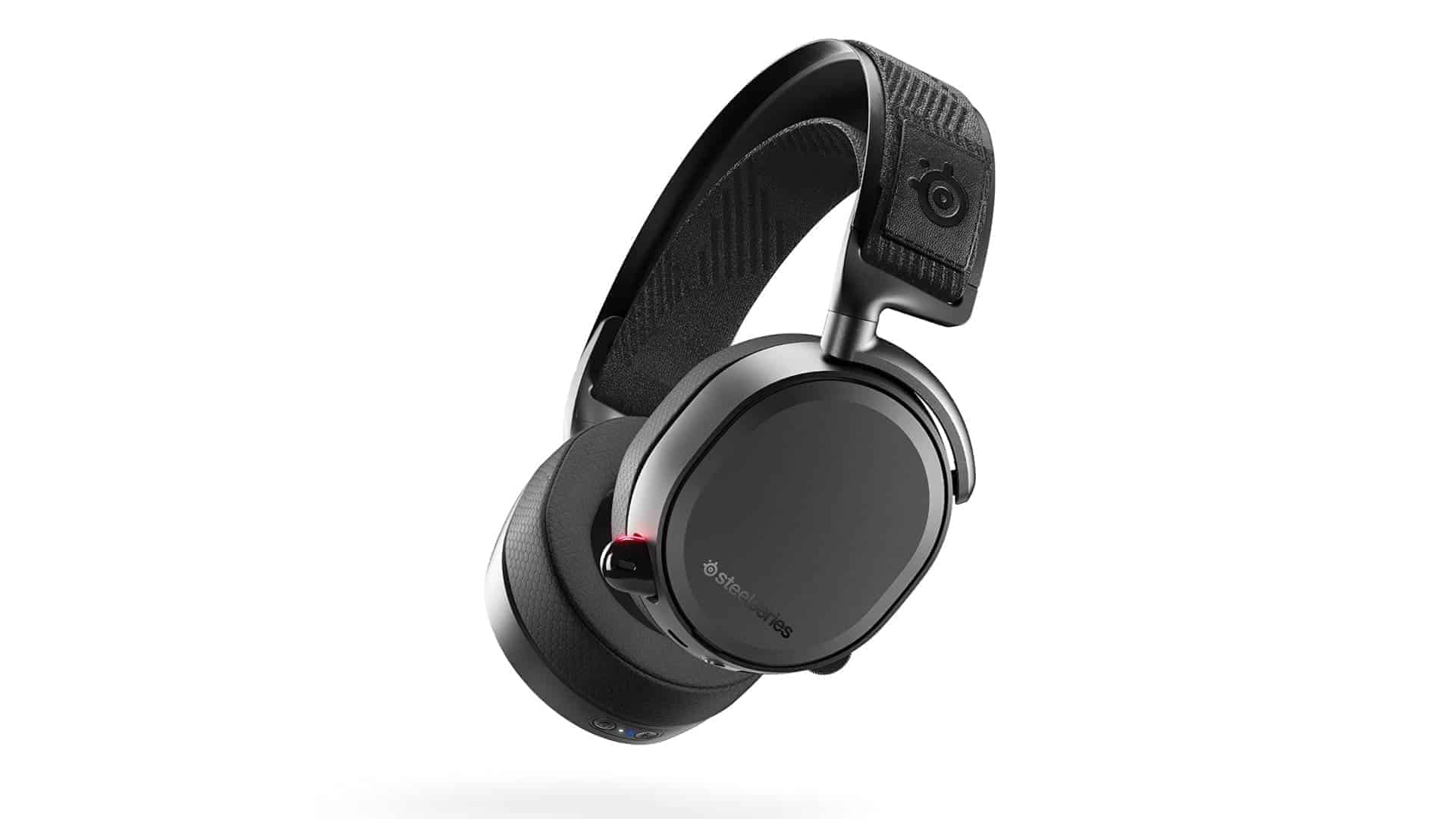 Rounding out this list is the most expensive option, but perhaps also the best option. At least for some users.

The SteelSeries Arctis Pro is packed full of premium features that will have you finding it difficult to want any other headset. It works with both PC and PS4 so you can flip between both your console and your computer with relative ease.

It’s got a retractable mic for easy storage when you aren’t in chat, and the wireless has a pretty darn good range on it so you can get up and move about.

These have 20 hours of game time on them so you can use them for quite a while. Once that battery dies though, you don’t need to plug the headset back in. Because the Arctis Pro comes with two swappable batteries.

One goes in the headset for the 20 hours of game time, the other sits in the base station and charges. When you need to, simply flip the batteries and put the charged up one in the headset, while you charge the dead battery. Rinse and repeat as needed.

This allows you to essentially have a wireless headset that never dies. So long as you remember to keep one battery charged at all times. Long game sessions? Not a problem for the Arctis Pro.