Since there’s no March Madness tournament this year, you may want to get into the action yourself by playing a basketball game or two, and we’ve narrowed down the options to the top 10 best Basketball games on Android.

In our list below you’ll find some that are a little more obvious and some which may have been hidden gems. But all of them have their own strengths and can provide hours of fun.

It all depends on what exactly it is you’re looking for in a basketball game. You could browse through all of the games on the Play Store yourself and there’s nothing wrong with that. A lot of the options are a waste of time though, which is why we put together this list of the best basketball games on Android. To save you some time.

This one is a bit of an older title entry on the list. But, it’s got a decent rating and seems to still have active players.

The graphics are also a little more cartoon-like, so the game is likely to be more fun than serious and could be a great time filler for when you have an extra five or ten minutes.

It features multiplayer mode so you can play against others. As well as a pretty large collection of challenges that you can complete.

You can also customize your characters with tons of different options from outfit pieces to different hair styles. If you’re looking for a simple but fun-packed basketball game on Android this is it and definitely one reason why we picked it for our best games list.

This is another older title but again another fun basketball game that won’t require you to memorize loads of controls.

Developed by PikPok, Rival Stars Basketball gives you easy gameplay in the palm of your hands. It’s a mix of player card collection and swipe controls for completing matches.

There’s a multiplayer mode so you can play against others or you can move through the single player mode to play by yourself.

While the main part of the game seems to be actions that happen based on the cards you pick and use, there will be times where you’re shifted into a 3D view of the game and will need to take shots.

It’s a fun and unique option that eared it a spot on our best Android basketball games list. And because it’s different from most of the other basketball games it should feel very accessible on a smartphone.

This is less of a game and more of an app but there are some game-like features which makes it a suitable pick for our best Android basketball games list.

MyNBA2K20 is actually the companion app for NBA 2K20, and feature things like card battle modes where you can see your collection of cards battle it out on the court against other players.

There’s also a cool feature that lets you scan your face into NBA 2K20 so your players in that game look like you.

It also lets you earn virtual currency for use in the main game on PS4 or Xbox One. So if you play the main game you will probably want this app installed just for the extras.

There are also weekly events you can compete in which give you rewards for use in-game. Some will even pop up daily.

If you’re a fan of the 2K franchise and aren’t keen on paying for the mobile adaption of the console game, then you’ll want to take a look at this game instead.

NBA 2K Mobile Basketball is about as close you will get to NBA 2K on a device other than the mobile version of NBA 2K20.

And it’s actually quite good. You can compete in 5v5 matchups or in a PvP mode and build your team of players. You can also collect cards from a roster of over 400 different players across the league.

The game even features some pretty good graphics and really easy controls. So you won’t be fumbling around with them for hours.

Best of all this game is free, so you’re getting a high-quality basketball game on mobile at no cost.

If you’re feeling on your game you can challenge other teams of three. And if you find yourself playing this often enough then you may not want to miss out on the daily log-in rewards.

EA is, surprisingly enough, still keeping this game up to date. And why shouldn’t it? It’s a pretty decent basketball game on Android and why we picked it for our top 10 best list.

With NBA Live Mobile Basketball you get to take your team all the way to the championship from the start of the season.

There are live events in the game that happen every single week to go along with all of the normal gameplay content. You won’t want to miss out on these as they can end up giving you some pretty useful stuff.

When you begin the game you choose which team you want to play as, and then you get to choose a superstar player to lead that team throughout the season.

The graphics are also overall, pretty good and the controls seems fairly easy to get used to. If you want a game that’s in-depth but not overly complicated this could be it.

Another somewhat simple basketball game with simple controls. NBA NOW Mobile Basketball was designed to offer you controls that you can play with one hand.

The one-touch controls make this an ideal game for on the go. If you’re out and about and you have only one hand free, you can still play this. And that was the idea.

In addition to the gameplay aspects, NBA NOW also has some non-gameplay features. Such as daily updated stats. With this particular feature you can actually keep up on how your favorite teams and players are doing.

Then hop into a game and play yourself. There’s also a prediction feature where you can predict which teams will win during the regular season. Guessing correctly will net you rewards so you won’t go home empty handed for participating.

You can also play the game solo or match up against other players for a more competitive game match. 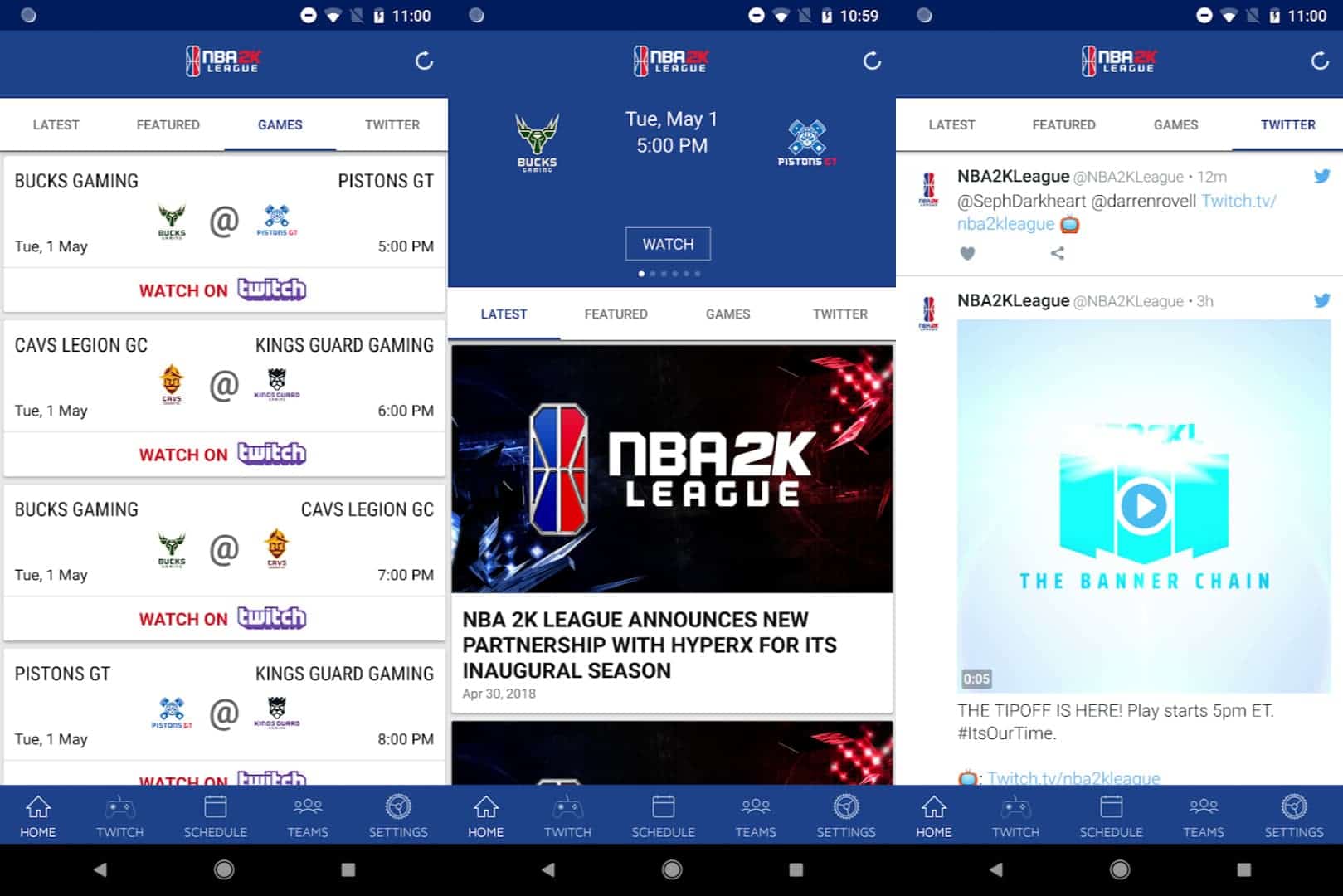 This next entry in our list isn’t a game but it does relate to them. This is an app that is dedicated to giving you all the information you need on the NBA 2K Esports league.

It has information on all of the teams competing in the league , as well as details on when matches are taking place so you don’t miss a beat.

There’s even links to Twitter posts from the official NBA 2K League account, as well as a Twitch tab so you can check out the streams from your favorite teams. There’s a schedule as well, because what would an app like this be without a schedule to tell you when the matches are actually happening.

The app also features highlights. If you enjoy Esports and NBA 2K League is one of the leagues you follow, then this is a must-have app. It’s also one of the reasons why we chose it for our best Android basketball games list.

NBA Jam is a classic and probably one of the best basketball games on Android. Not just for its nostalgia purposes but because it’s just a quality-made game.

It’s also made by EA, but from a time when the company was less about cash grabs and more about making great sports games that players would love for years.

NBA Jam still holds up today too, and it’s a paid game with no ads or in-game purchases. So you buy it once and that’s it.

For that money you get the original game with a few tweaks that were added in to fit the game better for touchscreens and mobile devices.

You can play it on Android TV too if you want that old school feel of playing it on your old console. There are also four modes of gameplay, including online PvP and local multiplayer, and many more features.

If you grew up when this game came out, this is a perfect basketball game for you on your device.

This is a little bit different than many of the games on this list. Because it’s not about NBA. It’s actually about street ball.

The gameplay is also 1v1 multiplayer. It’s real-time multiplayer at that which means you will probably need to think on your feet if you want to best your opponent.

Matches are designed to be quick so you can hop into and out of gameplay whenever you feel like it. It features some pretty good graphics that are 3D and somewhat realistic, instead of a more cartoon-like design.

Outside of the 1v1 match ups you can collect different character customizations and give your players a unique style. In fact there are over 400 different customization options for you to choose from.

Overall this might be one of the best options on this list. Because it’s free, it has good graphics, offers quality gameplay and gameplay is fast.

That might be a little subjective as some may not care for this style of sports game. Perhaps you like yours to be a little more casual. And if that’s the case there are still some good options that were presented earlier.

NBA 2K20 is a very good game though, and it has loads of gameplay content on offer that puts it at the top of this list.

For starters, you get careers and stories modes. Which focus on your running through an entire season of the NBA with your team of choice. There’s also the new Run The Streets mode which lets you play against others in 3v3 street ball games.

So if you like the street ball game type, you’ll now get it here. Of course there’s also multiplayer if you have to have some real competition. The game will let you connect to other players in one of two ways. Either through Google Play Games, or through a LAN connection to play with friends locally.

NBA 2K20 is a $6 game and it has micro transactions. So you’re getting a paid game experience but there are additional things you can buy, if you so choose.

Even if you don’t, this is still probably the best basketball game on Android for anyone who wants a console-quality experience.