Call of Duty Mobile launched back in October of 2019 and since then there have been a wide selection of gun skins that range from epic to wacky.

As one of the most popular shooter games on mobile we thought it would be cool to put together a list of some of the craziest gun skins in the game up until now. This list isn't exhaustive, so there may be some that we missed or simply chose not to add.

That being said, there are a lot of different guns in the game at this point so there are also just too many to include them all. Whether you just started playing Call of Duty Mobile or you've been playing since the beginning, you should be able to find appreciation in some of the more unique skin options players have had at their disposal.

Some of the craziest gun skins in Call of Duty Mobile

When it comes to weapons in general Call of Duty has gotten some of the coolest weapons of any shooter. Some are downright out there, but many are epic and highly sought after.

We're gonna kick this list off with one of the most recent epic skins available.

This is a gun which recently received a nerf that many feel was very much needed. It might not be as powerful as it used to be. You'll still likely see it more often at the higher levels of the ranked play mode though.

Of course this isn't about which are the best weapons in general. This is about the skins themselves. The look of the weapon. And the Space Station MSMC is definitely one of the coolest looking guns in the game.

It has a futuristic look that goes well with some of the similar soldier skins (which we'll be doing a list about as well.) and it has a pretty neat special effect when you get kills with it, turning your enemies into what looks like a blue crystal.

The major downside here is that this is a gun skin that can only be acquired from the Lucky Draw system that Call of Duty Mobile employs. Many players hate this system, and for good reason.

Because the chances of getting the best items from it are so low that you have to spend an obscene amount of money on CoD Points to ensure you will get it. You might get extremely lucky and get it on your first try. But that won't be the case for most people.

So it's highly likely that many players will end up not getting the gun due to the nature of its acquisition. All that said, that doesn't take away from how cool it looks. If you make the decision to spend some of your CoD Points on the Lucky Draw and are able to get it, hats off to you. Enjoy it. 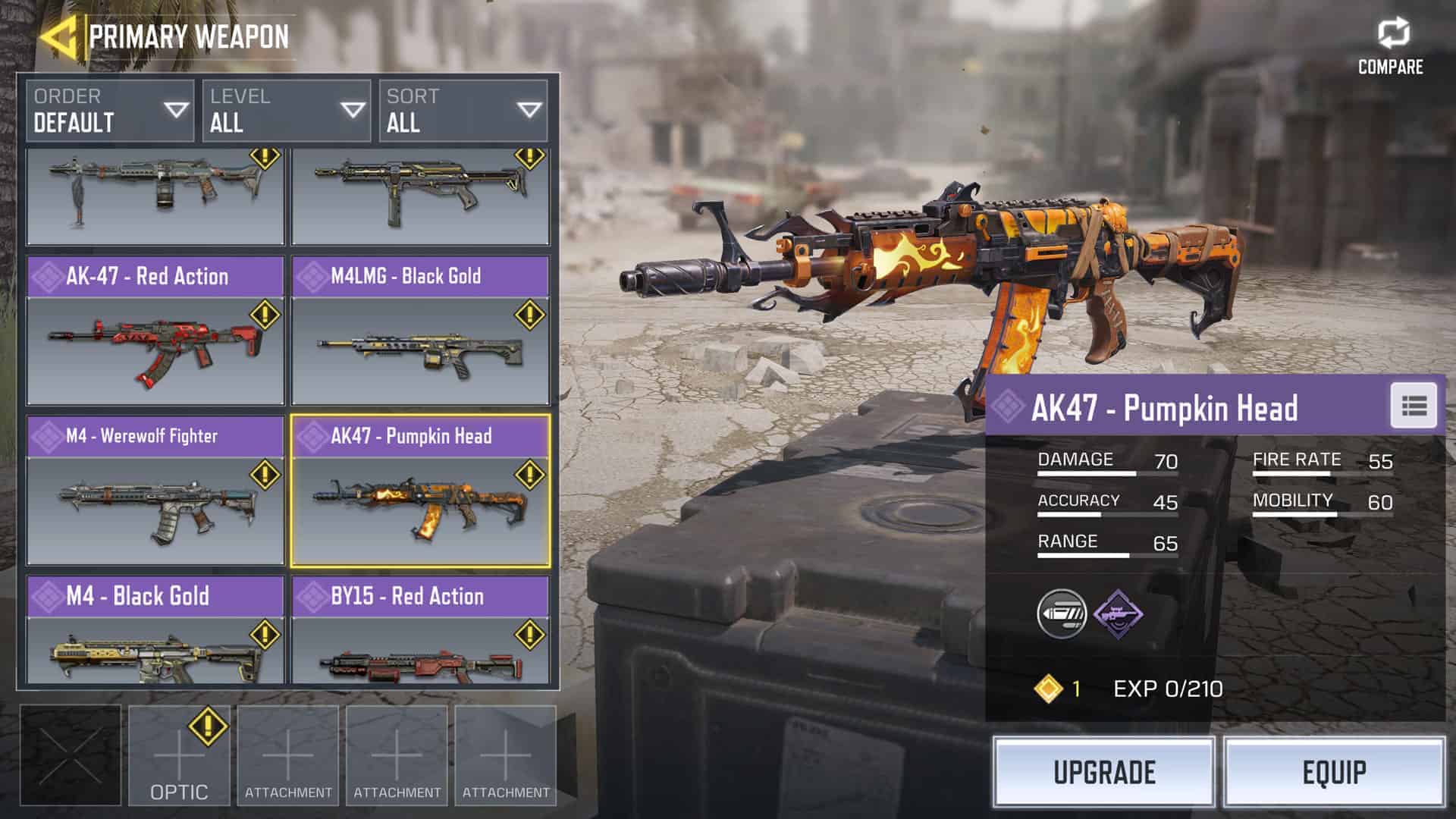 This was a gun skin that was released during the Halloween event back in October of last year. Unlike the Space Station MSMC it doesn't have a cool death effect on your enemies.

It does however have a cool look to it. From the gnarled design of specific elements around the barrel and iron sights to the evil-looking pumpkin that stares at you in the face as the barrel of the gun stares down opponents, this is one skin that is definitely more unique and we thought it deserve a highlight.

If you missed picking this up, then you will probably never get the chance to grab one. Unfortunately. There is always the chance that it could be brought back for a Halloween event this year, though. That said it's probably best not to get your hopes up.

And if you like these sorts of seasonal guns, missing out on one that you like is more of a reason to try your hardest to participate in future events when they come up. Because you never know what will be on offer.

I know, the S36 has had its fair share of controversy. It's all due to the players that would use the gun while camping in the same spot for the entire match.

It's still a good gun though. And if you're not one to sit and camp until the match is over it's one you should definitely try out. The Phobos is probably the most unique version of the gun.

It features a glowing pink color that shifts to different pink hues, and upon death it has a cool special effect that turns your enemies into a pink crystal.

This was one of the weapons that was only available in a Lucky Draw, so the chances that many people have it are slim. But that doesn't mean that it isn't floating around anywhere.

If you see it in the wild, whether from an enemy or from someone on your team, watch for that death effect.

The S36 – Phobos was released during the Valentine's Day event so it's no longer available to acquire. But that doesn't mean you can't still appreciate it.

Ice to see you…

Here we have another seasonal weapon that was available as a Lucky Draw item, which probably means there are less people that have it due to the low chances of getting it unless you spend enough CoD Points to get all ten draws. Which isn't exactly cheap.

The gun though has a unique style that evokes the spirit of Christmas and leaves your opponents feeling a little frosty upon death. Because after you get a kill your enemy turns into a snowman for your own personal delight.

The style of the gun itself might be an acquired taste, but the death effect certainly makes things more fun, and if you're a player who has it in their inventory, be sure to break it out for the Holidays this year.

It'll make matches more cheerful and it just feels like the right time of year to use it. 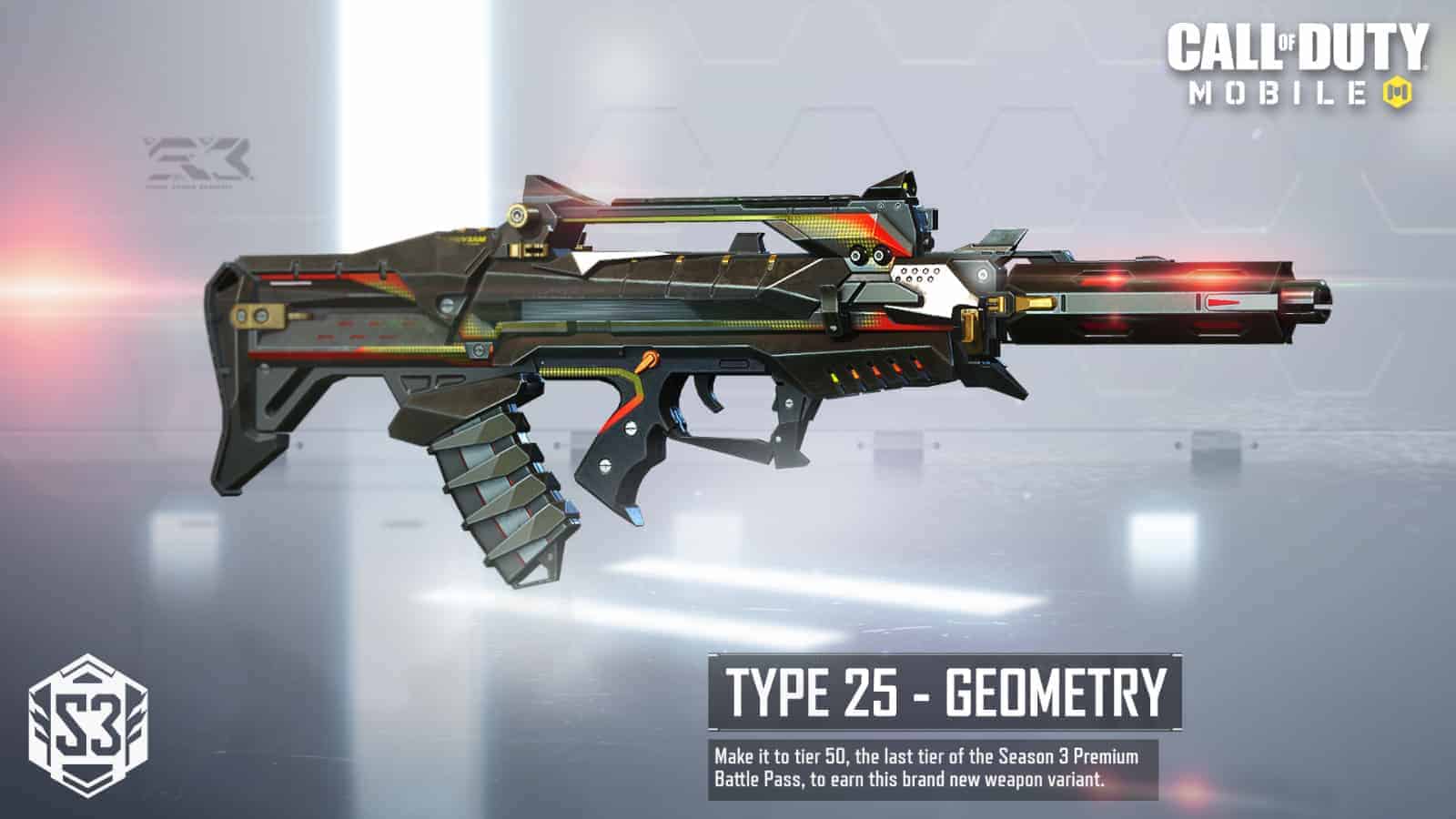 This is another weapon which doesn't have any special death effects on kills. It is definitely one of the more unique looking guns in the game though. And, one of a few weapons that carry this particular design variant.

The Geometry series weapons were introduced in season 3. With the Type 25 version was the reward for reaching rank 50 in the season 3 premium battle pass.

If you didn't hit rank 50, then you didn't get this gun and it's no longer available to acquire. Unless Activision and Tencent ever decide to bring it back in a different way. That isn't likely though.

If you were able to make it to rank 50 and grab this awesome looking gun, you definitely have one of the coolest looking gun skins in Call of Duty Mobile.

You used to only be able to acquire this gun from Zombies mode. That changed when Zombies was pulled from the global version of the game.

One would think that you could no longer acquire this gun skin then. On the contrary. Instead of being a random drop from Zombies, you can now buy the shards you need to craft the gun.

You need 100 total shards to complete the craft, and you can only buy 10 shards per day. Each shard also costs 200 credits, so crafting the gun won't be cheap.

Suffice it to say you'll likely need to be playing this game consistently so you can continue racking up credits. That is unless you already have an excess and can just buy all 100 shards over a period of 10 days without needing to get more.

Aside from the menacing looking design of the gun, it also has a cool reload animation that is slightly different from other J358 pistols. 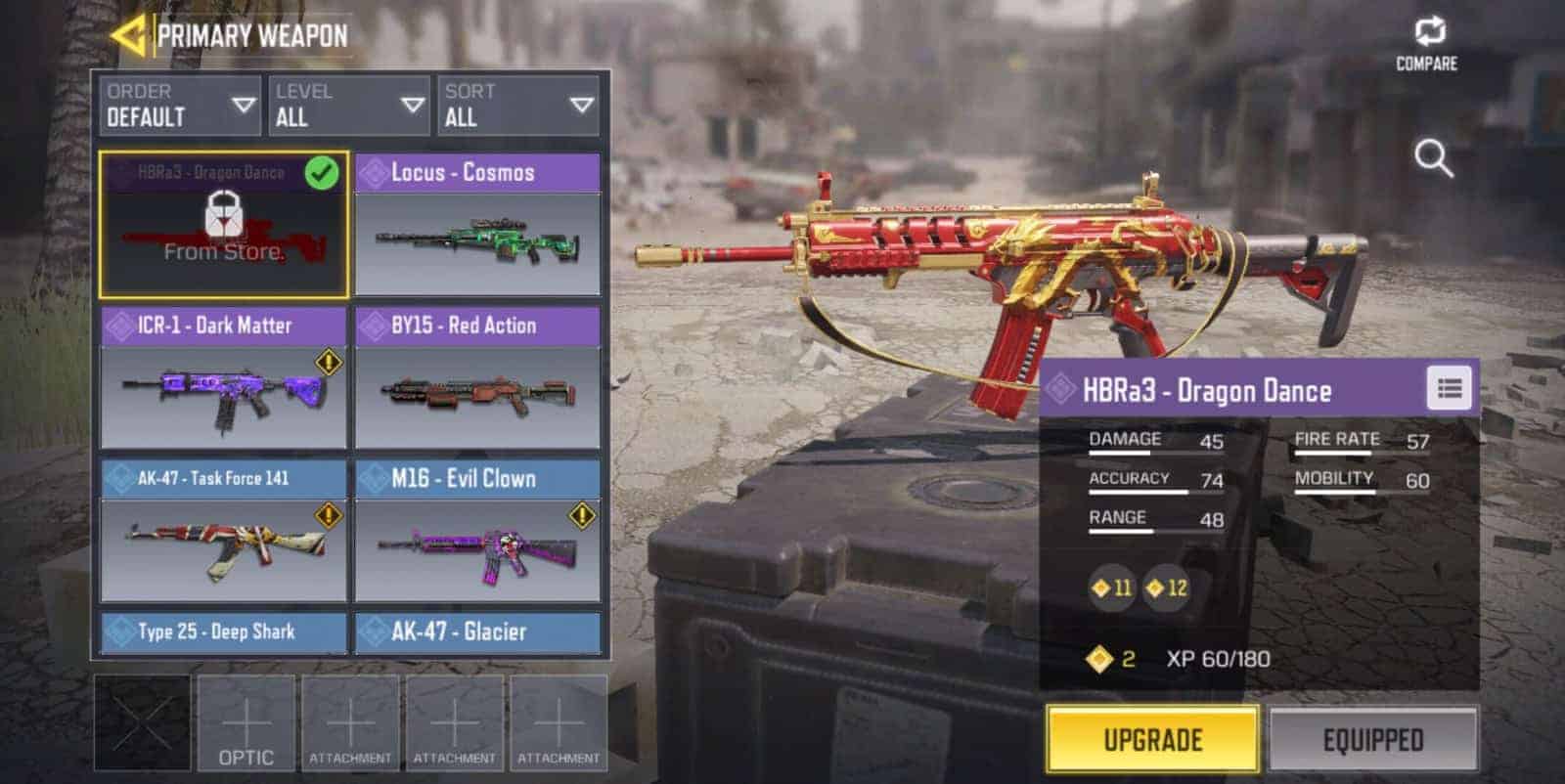 During the Lunar New Year the game received a couple of unique skins for the weapons and the soldier that were themed after the holiday.

The HBRa3 – Dragon Dance assault rifle is one of these unique gun skins that Call of Duty Mobile players had the chance to pick up. Sadly it was also only available as a Lucky Draw weapon.

If you were lucky enough to get this after deciding to spend some CoD Points, you surely have the envy of other players.

Rounding out the list is the GKS – Tactical Unicorn. One of the most unusual gun skins in Call of Duty Mobile. In fact it's definitely the most unusual out of any gun that's ever been brought into the game.

As with quite a few of these unique looking weapons, the GKS – Tactical Unicorn is a Lucky Draw gun. Unless you're one of the lucky people who has bundle access. Then you can just buy the gun straight up with a bundle.

That being said there's no telling if this gun will be included in a bundle or not. Bundles are new and this gun was just added within the last week.

It might not be a design that everyone cares for. It's definitely a gun you won't feel good about dying to. Imagine the lasting memory of getting stomped by an opponent who was using this all match and always seemed to find you first.

If you play DOOM Eternal and you like the Doomicorn skin for the DOOM Slayer, then you'll probably like this gun. Try your hand at a lucky draw for it.

Or better yet, save your money and wait till Activision adds bundles for all players globally. That way you can pay money for the stuff you want. And actually get it without leaving everything up to chance.