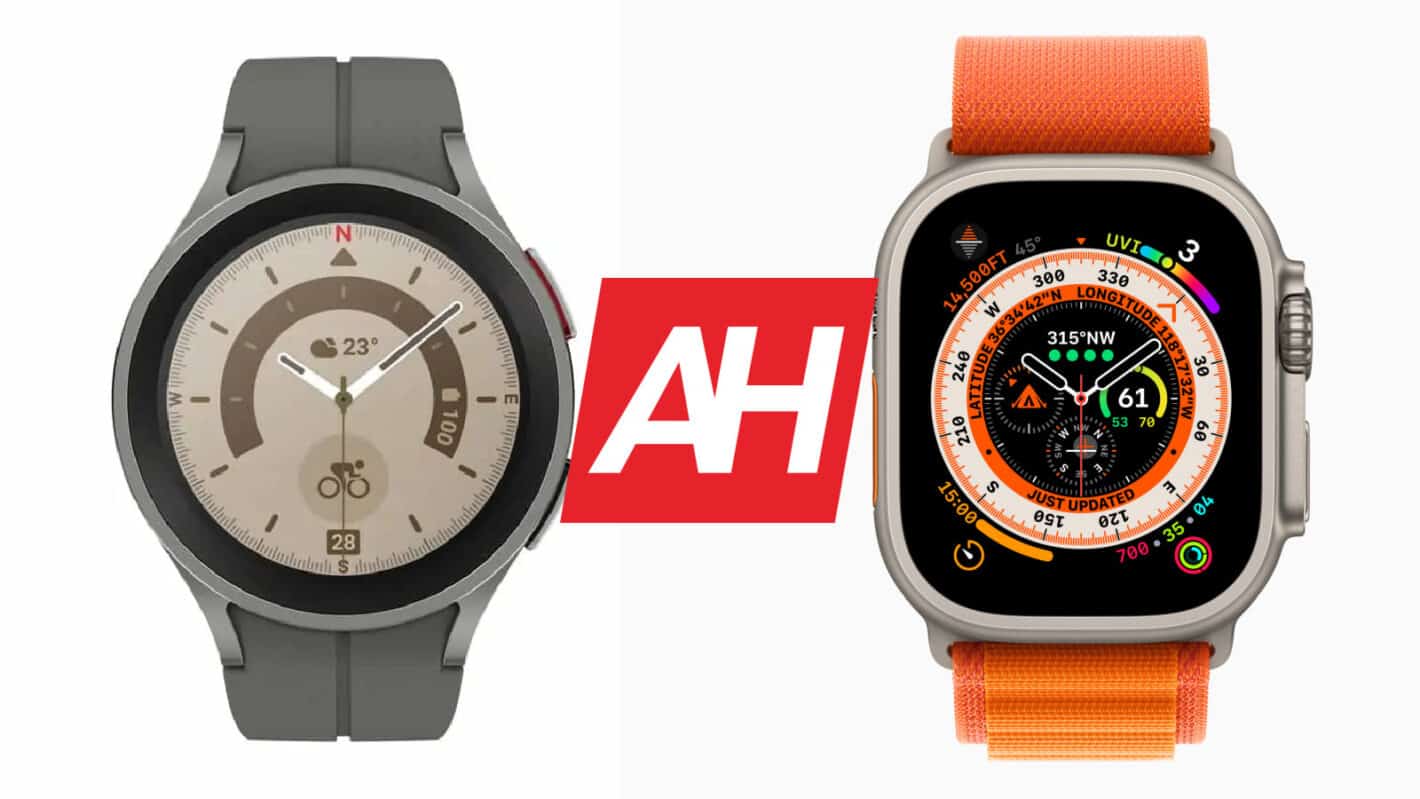 Samsung’s Galaxy Watch 5 Pro and Apple’s Apple Watch Ultra are two of the latest smartwatches on the market. Both watches also target the exact same customer group – adventurous outdoor types who are active and need/want features that work with that. Both smartwatches offer a fair amount of those features to their respective customers. And of course, both are naturally geared towards separate platforms.

There’s no getting around it. When it comes to design, quite honestly both watches look massive. Although the Apple Watch Ultra is definitely larger than Samsung Galaxy Watch 5 Pro. It’s noticeably thicker too. But dimensions aside, the design of both watches is really rather stunning. A big part of that is no doubt the use of the titanium for the watch body.

However, both companies take a different approach to the shape. Samsung follows its familiar round design for the watch body while Apple continues to use a square body. Both companies are using sapphire crystal for the glass that sits on top of the display. Which helps protect the display from scratches and scuffs. Both also have a decent selection of watch bands to choose from.

While the Apple Watch Ultra is undoubtedly larger, both watches probably don’t feel too different on the wrist. So most people shouldn’t have to worry about either one feeling a lot more weighty than the other. Overall both have good designs and even though slight improvements could be made, users will surely be happy with their picks. 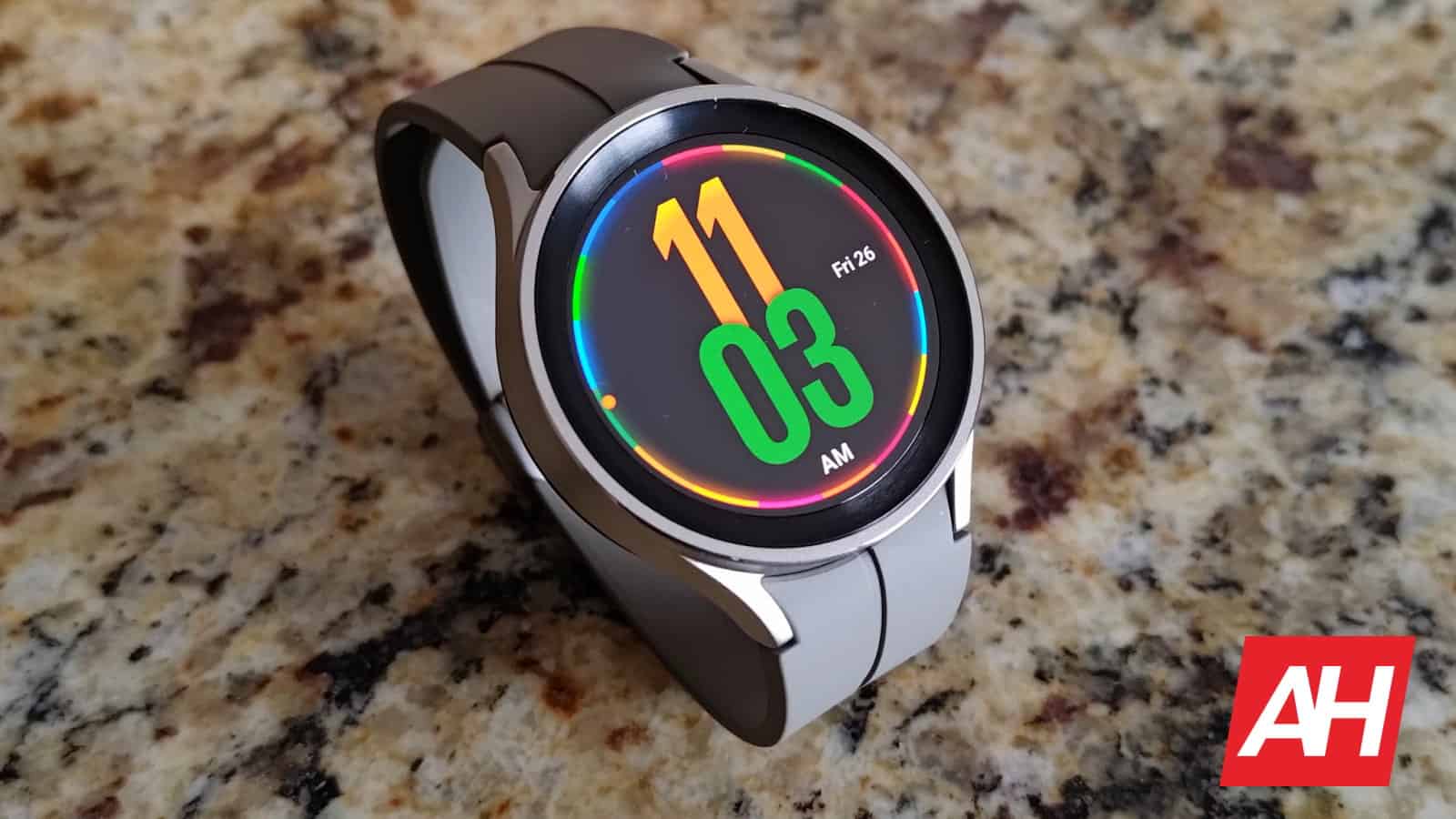 Both watches have great-looking displays and will be able to get the job done for their intended purposes. Which is to ensure that everything is visible when in use. That being said, Apple’s display is larger and that may help with visibility a little more than on the Galaxy Watch 5 Pro. The Apple Watch Ultra also has a slightly higher pixel density and screen resolution.

Both watches have an always-on display as well, but Apple’s Watch Ultra gets significantly brighter. The Galaxy Watch 5 Pro has a peak brightness of 1,000 nits whereas the Apple Watch Ultra has a peak brightness of 2,000 nits. So the Ultra will be more easily visible even in direct sunlight. For those that use the device on their outdoor adventures constantly, and especially in sunnier climates, this is definitely going to matter.

Aside from the peak brightness, size and shape may play a role in comfort and usability. Since the Apple Watch Ultra not only has a larger display but also a square shape, there’s more usable screen space. But the round design of the Galaxy Watch 5 Pro definitely has a more comfortable flow to it being paired with the touch bezel. Something about the scrolling interaction of dragging your finger around the edge of the display in a circular motion just feels more natual.

Even if it means you have to give up a little bit of screen space to gain that navigation capability. Still, as mentioned both watches have great displays. And which one is better more likely comes down to a feeling of personal preference. Even though the Watch Ultra display may seem better on paper.

Since we haven’t been able to test the Apple Watch Ultra we can’t really attest to its performance. But it should perform better than or at least equal to the current Apple Watch Series 7 devices and prior. And those perform pretty well compared to smartwatches running on Wear OS. We’d expect nothing less but a snappy experience with Apple’s latest high-end smartwatch. The Watch Ultra is using a brand-new S8 chip which should perform just as well as the S7.

It can’t hurt to have more RAM though. And the Apple Watch Ultra definitely comes with more RAM. At double the amount of the Galaxy Watch 5 Pro, coming in at 32GB. That is sure to help with running different apps and completing tasks. And all that RAM may be needed with everything the Apple Watch Ultra can do.

When it comes down to it, both the Galaxy Watch 5 Pro and Apple Watch Ultra will be able to handle anything you throw at them.

No matter how many cool features a smartwatch has and no matter how well it performs, all of it is irrelevant if the watch doesn’t have the battery life to sustain your usage. Both the Galaxy Watch 5 Pro and the Apple Watch Ultra come with the longest battery life of any watch that either company has ever produced.

Though, the Galaxy Watch 5 Pro does slightly win out here. Each watch has decent battery life during standard use. With the Galaxy Watch 5 Pro lasting close to 40 hours (maybe a little more) on a single charge while using most of the features available. The Apple Watch Ultra is rated to last about 36 hours on a single charge with normal use. Where things get really interesting is with the low-power mode that each watch provides. Which extends the battery life by a significant amount.

On the Galaxy Watch 5 Pro, users can get up to 80 hours on a single charge with its low-power mode. The Apple Watch Ultra offers up to 60. Which is still good, but almost an entire day less. The other thing to take into account is that low-power mode is not available on the Apple Watch Ultra right away. Apple says it’s coming soon, which means users will have to wait a bit before they can even extend the battery life this way.

For those that go on longer excursions, they’ll simply have to be a little more mindful if they want the watch to last. Apple doesn’t list the size of the battery in the watch, but with the Galaxy Watch 5 Pro you’re getting a 590mAh battery. Much larger than anything else Samsung offers. It’s also important to remember that battery life is going to be different from person to person. So while the Galaxy Watch 5 Pro may provide better battery life for one person, the Apple Watch Ultra may last longer for others. It simple depends on the use case.

That being said, if both watches are being used in the exact same way, the Galaxy Watch 5 Pro will last longer. And that simply comes down to what is probably a larger battery capacity.