To this day, Sling TV remains one of the cheapest options for cord-cutting and still having live TV available.

Despite its low entry-price, Sling TV can still be quite confusing. With the many different packages, and add-ons available. So here, we’re going to explain everything about Sling TV, and tell you everything you need to know about this service.

What is Sling TV?

For those of you that might be unaware, Sling TV is actually owned by Dish Network. The name “Sling” is actually much older than the service. Dish used to sell “SlingBox” and “SlingPlayers”, which was essentially their version of TiVo. Then in 2015, Sling TV was born. Using a name that many people were already familiar with.

Dish Network doesn’t intend for Sling TV to replace its satellite service. It’s an additional service that it offers, to keep growing their customer-base, by adding cord-cutters. Something that many cable companies – like Comcast and Cox – have tried to keep on their service by offering an insane amount of channels.

Sling is the most robust streaming service on the market today, and you can get started for just $30. Which makes it so popular.

The cost of Sling TV is a huge variable. While you can get started for just $35 with the Sling Blue or Sling Orange package, you can also drive that price up over $100 pretty easily. With the many add-ons that are available for Sling TV. 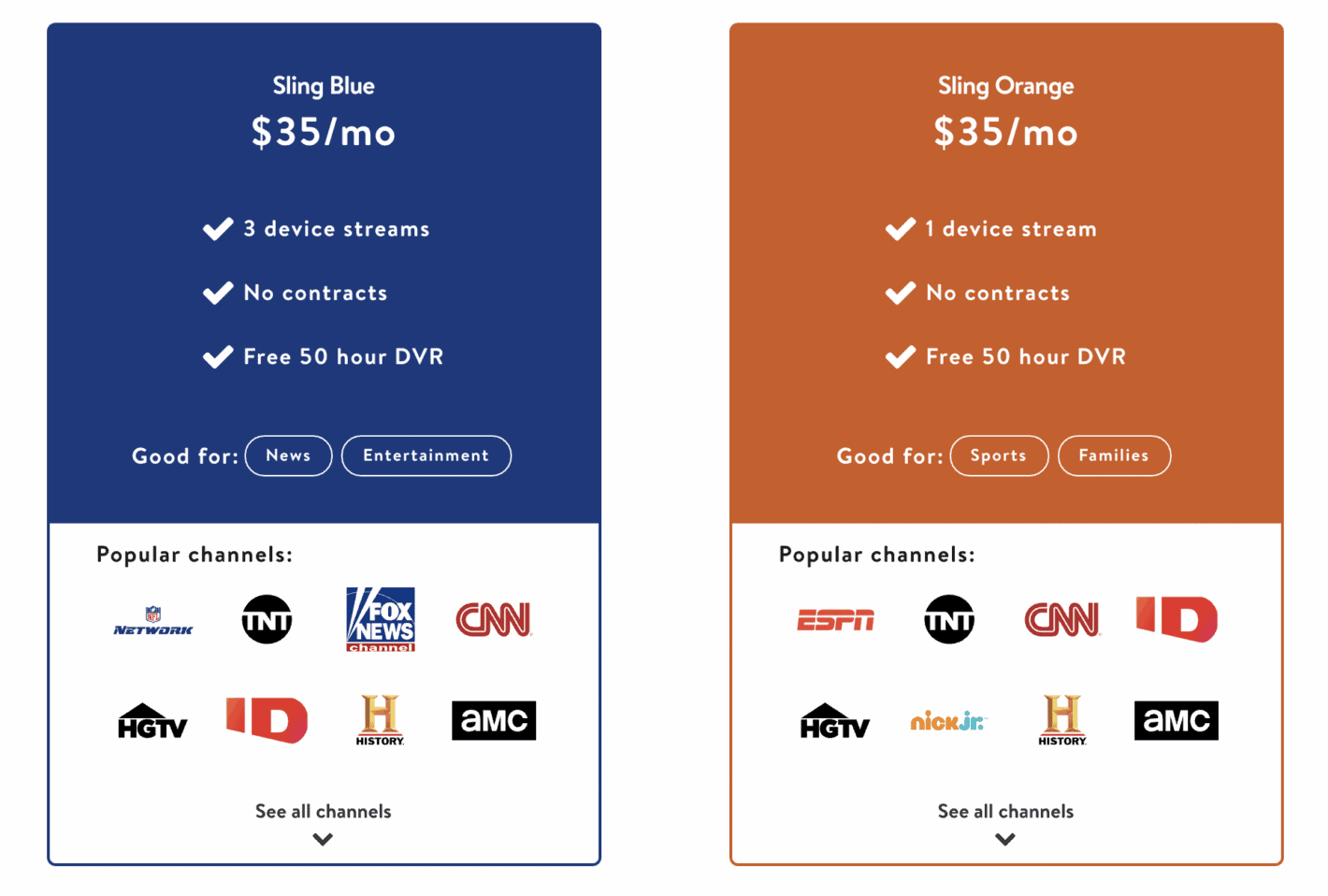 Add-ons cost as low as $5, and can go up to $20. These add-ons include additional channels, as well as additional features – like Cloud DVR Plus.

Depending on what you’re watching, and what channels you want, you can definitely pay a pretty penny for Sling TV. Below, where we talk about channels and add-ons, you’ll get a better idea of how much Sling TV will cost you.

Update: On January 27, 2021, Sling TV announced a price increase of $5 across the board. So the Sling Blue and Orange plans are now $35 per month. While the combined plan is $50.

Sling TV is split into three groups, essentially. There’s Sling Blue and Sling Orange core plans, which are $30 individually or you can get both for $45/month. Then there are add-ons. Which will provide you with the less-popular channels for an added fee. Which we’ll explain more below.

With Sling Blue, you’re getting 45 channels. You’re getting a ton of pretty popular channels, along with Fox Sports channels (not regional sports channels from Fox, only NBC though). For the most part, local channels are not included. Some markets will have NBC and Fox locals available, but those are very few. You can, alternatively, get an OTA antenna and get those channels without paying for a monthly service though.

Here are all the channels available with Sling Blue:

The main difference with Sling Orange, is that you are getting Disney channels. Like Disney, ESPN and such.

You get 33 channels with Sling Orange:

With Sling Orange and Sling Blue combined, you get both packages, or around 50 channels.

Sling TV offers a ton of add-ons, allowing you a sort of a la carte experience here. So if you want more sports channels, you can pay $10/month for it. Or get more comedy channels for $5/month. Among many others.

Sling is continuing to add more add-ons to its service. So we urge you to check their website as this info could be outdated.

You can also add on Cheddar’s multiple channels for free right now. Since they are free, you may as well add them to your package.

You can also add plenty of premium channels to your Sling TV subscription. HBO is no longer offered. Sling TV has not said why, but the change happened after HBO MAX launched, so there’s likely a contract dispute between the two companies. Good thing is, you can still sign up for HBO MAX elsewhere.

This is where Sling TV really shines from the rest of the pack. With the many, many international add-ons available for your TV watching pleasure. No other Live TV Streaming service comes close in this regard.

So as you can see, there are a ton of add-ons available for Sling TV. To help you really build out the TV watching experience that best suits you. 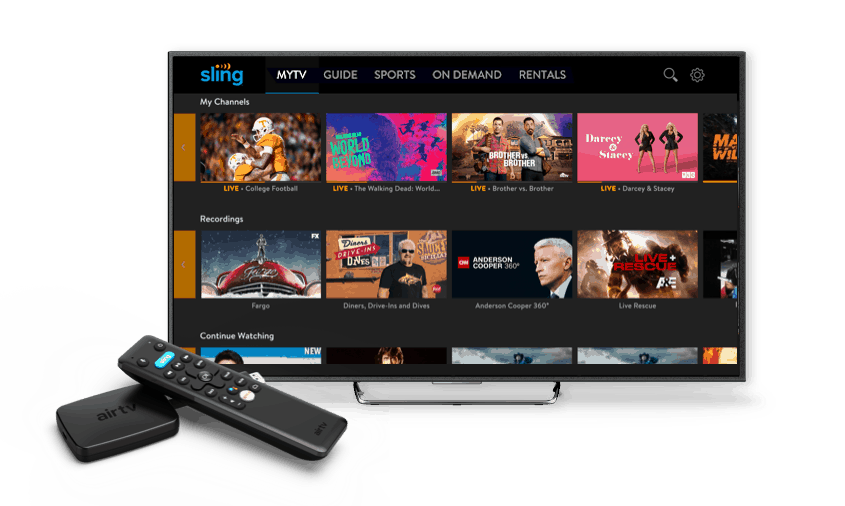 What platforms does Sling TV work on?

Sling TV is available on just about every platform you can think of. This includes the following:

That covers just about every platform out there and then some. Sling TV is currently available on more platforms than any of its competitors.

What features are available?

Every Live TV Streaming service offers a bundle of features with its service. This is a way for them to justify their prices – particularly those that are around $65/month. And a way to differentiate themselves, seeing as almost all streaming services have the same core channels available. With really only a handful that are different. So here are the features that Sling TV offers.

On May 25, 2021, Sling TV began rolling out its new design of its app. Starting with the Amazon Fire TV, and it will be available on other platforms shortly there after. Here’s what is new:

Sling does give every customer 10 hours of free Cloud DVR storage. Obviously, that’s not a lot, and really only enough to store a few shows a week, or even two games.

However, Sling does offer an add-on for this. For $5/month, you can get upgraded to Cloud DVR Plus, which gives you 50 hours of content. And if you have a Roku, you can get 100 hours with Cloud DVR Plus. It’s unclear as to why the difference between devices.

Like traditional DVRs, Sling TV does delete older recordings, to make space for new recordings. To prevent it from deleting shows you don’t want deleted, you can mark them as “protected” in the DVR. So you can prevent it from being automatically deleted. There are also DVR folders available for organizing the content you’ve recorded.

Cloud DVR is available on most channels. Though some of them will not be able to be recorded.

In addition to recording content with the DVR, Sling also offers a pretty robust selection of titles available on demand. And if they are not available on demand, you can rent them. Rentals are priced at $3 for standard definition and $4 for HD. You also have 30 days to watch anything you rent. So you can watch it plenty of times.

Sling TV does break down titles that are available on demand into different categories. Making it easier to find something to watch.

Another way that Sling really stands out from the competition is with its free content. You can watch more than 100 hours of movies and TV shows on Sling TV, without paying for the service. In fact, you don’t even need to provide a credit card number.

Sling TV started this in 2019, but it became very popular during the pandemic in 2020. With everyone being stuck at home for months, and needing some new content to watch, to stay busy.

How can I get a free device, or a discount on Sling TV?

Sling TV does routinely offer up some pretty incredible deals for getting a free device like an AirTV, or Roku. As well as getting a month free. So it’s always a good idea to check out their site to see what their current deals are. 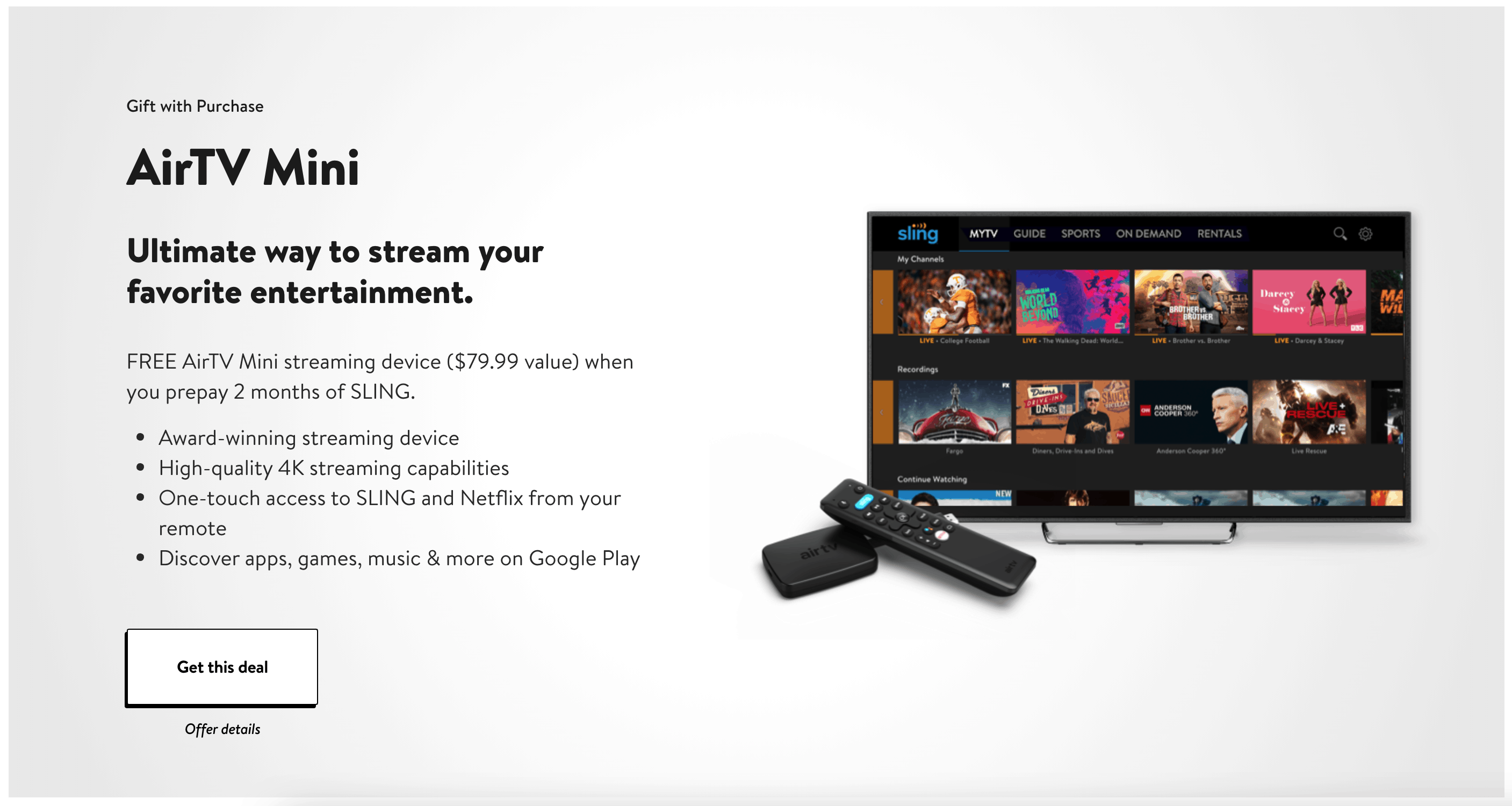 At the time of writing this, you can get $10 off of your first month of Sling TV. Getting it for $20/month or $35/month for Blue and Orange combined.

It is also worth noting, that in order to get a free device like an AirTV, you generally do need to prepay for a month or two up-front. Which also means you won’t be able to use the free trial.

Is Sling TV worth it?

That is going to depend on what features and channels you need and watch. If all of your channels are included in the Sling Blue and/or Orange packages. Then Sling is a really great option, and pretty cheap too. But there is the annoyance of having to switch to your actual TV to get local channels – and the fact you need to buy an antenna for that. But that is one way that Sling TV is able to keep its prices pretty cheap.

If you’re a casual viewer of live TV, then Sling TV will do the trick. And the fact that you can pretty much pick and choose the channels you want to add to your package is an added bonus.