Samsung announced the Galaxy Z Flip 3 on August 11, 2021. It was announced alongside the Galaxy Z Fold 3. It is technically the third Flip smartphone to come out, though the second one was really just a 5G version of the original. And it marks the biggest changes to the Flip yet.

The Galaxy Z Flip 3 is currently the cheapest foldable smartphone on the market, coming in at $999. It’s also the only one that has broken the sub-$1000 barrier. Which means it will likely be one of the more mainstream foldables out there.

With the Galaxy Z Flip 3, Samsung made a few changes to the phone. Though the biggest one is the Cover Display. It’s now four-times larger, and a whole lot more usable. Among many other changes.

Before you run out and buy the Galaxy Z Flip 3, here’s everything you need to know about it. 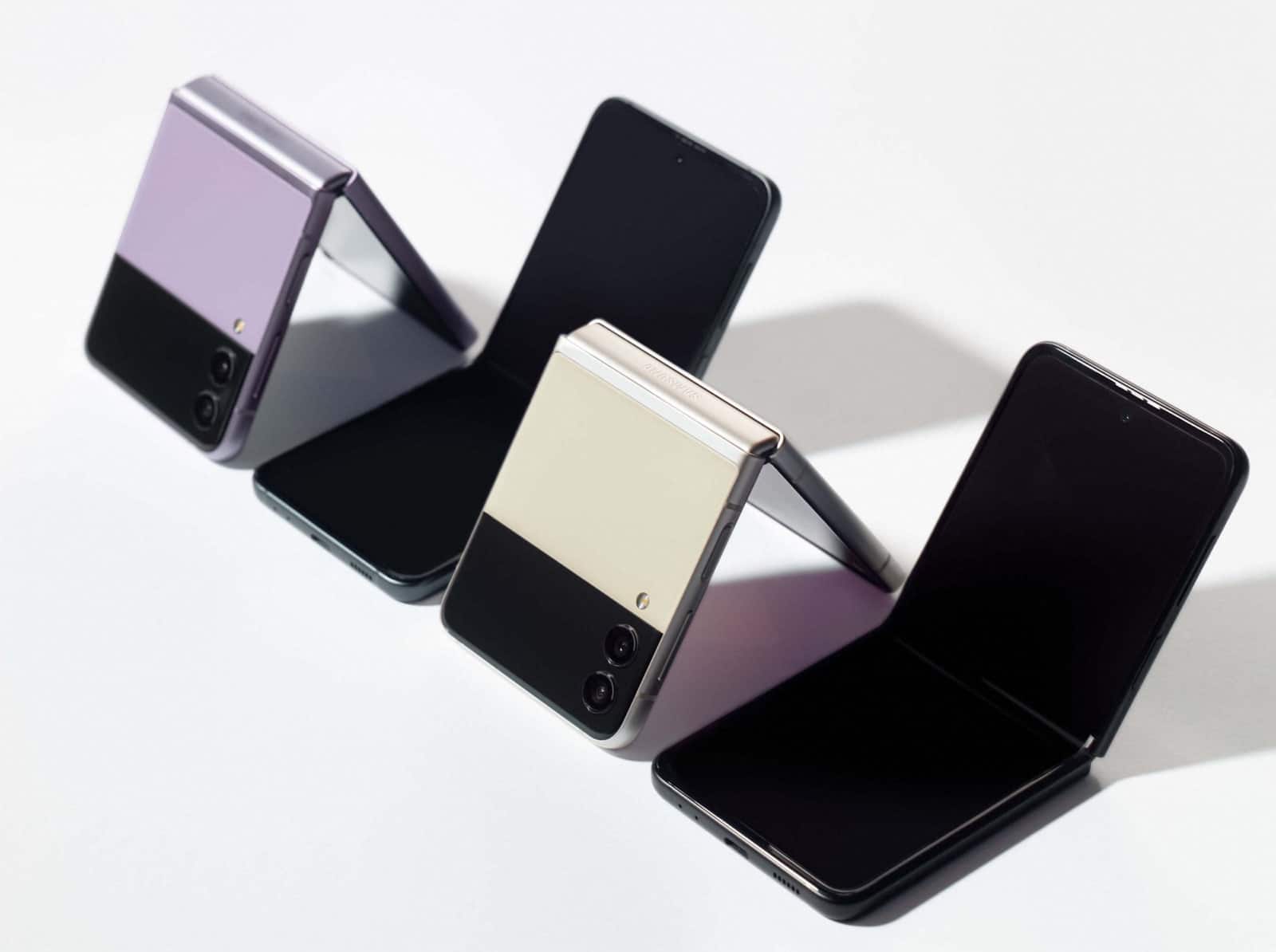 How much is the Galaxy Z Flip 3?

This phone is up for pre-order now and will be available everywhere starting on August 27. It does support all three carriers too. Including AT&T, T-Mobile and Verizon.

For those that pre-order the phone, you will get a $150 Samsung credit which can be used on cases, headphones and even the new Galaxy Watch 4. You will also get a free year of Samsung Care+ included when you purchase a three-year plan.

Samsung is offering up to $500 in trade-in credit for your old phone. As usual, the full amount will depend on how old your current phone is. The newer the phone, usually the more you’ll get for trading it in.

If you get the full value for your trade-in, that means you can get the Galaxy Z Flip 3 for just $13 per month for 36 months.

All three major US carriers will sell and support the Galaxy Z Flip 3. That includes AT&T, T-Mobile and Verizon.

Samsung and Best Buy will also sell the Galaxy Z Flip 3 unlocked, which can still be used on any of these carriers, as well as MVNOs like Mint Mobile, Ting and others. The main advantage to getting an unlocked Galaxy Z Flip 3 is the fact that you won’t have added bloatware from the carriers installed and taking up precious space.

Where can I buy the Galaxy Z Flip 3?

You can buy the Galaxy Z Flip 3 pretty much everywhere that sells Samsung phones. As well as the three major carriers. Those include:

No matter where you buy the Galaxy Z Flip 3, you will be eligible for the different promotions and offers that Samsung is offering. However carriers and other retailers may offer some additional offers too. So it’s a good idea to look around. 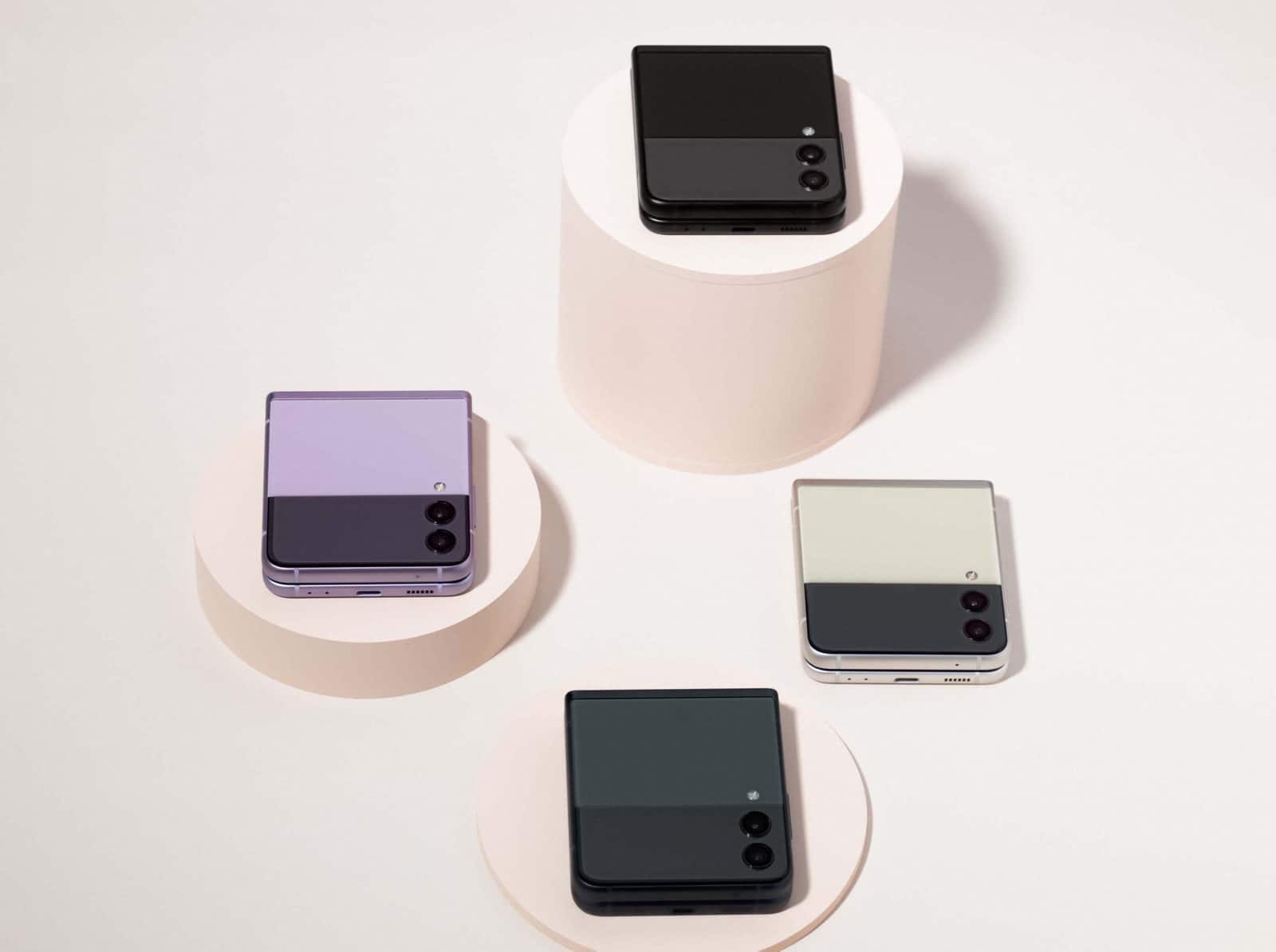 Samsung is offering the Galaxy Z Flip 3 in seven colors this time around. That’s a whole lot more than usual for Samsung. But there is a caveat here. Four colors will be available everywhere, while three will be exclusive to Samsung.com.

Every retailer and carrier will have the Galaxy Z Flip 3 in Cream, Black, Green and Lavender. While Samsung.com will have those, as well as White, Pink and Gray.

This means that it is likely a better idea to purchase your Galaxy Z Flip 3 from Samsung.com instead of a carrier. Keep in mind that you can still finance through Samsung. And Samsung typically gives you bigger promotions for trading in your current phone.

What new features did Samsung add?

One of the biggest changes to the Galaxy Z Flip 3 is actually the Cover Display. It went from being a 1.1-inch ticker-like display, to a 1.9-inch display that takes up nearly half of the folded backside. And that’s where things get interesting.

With the Cover Display being much larger this time around, you’re going to be able to do more with it. This includes seeing up to four lines of text, when notifications come in.

However, perhaps more interesting than that, is being able to adjust Quick Settings, use Samsung Pay and add Widgets.

Currently, we have not seen this in action just yet, so it’s unclear how well this is going to work. But it does look like it’s going to be pretty impressive. And add a lot of functionality to that Cover Display. Though still lack a bit of functionality compared to the Galaxy Z Fold 3’s. It’s also a quarter the size. 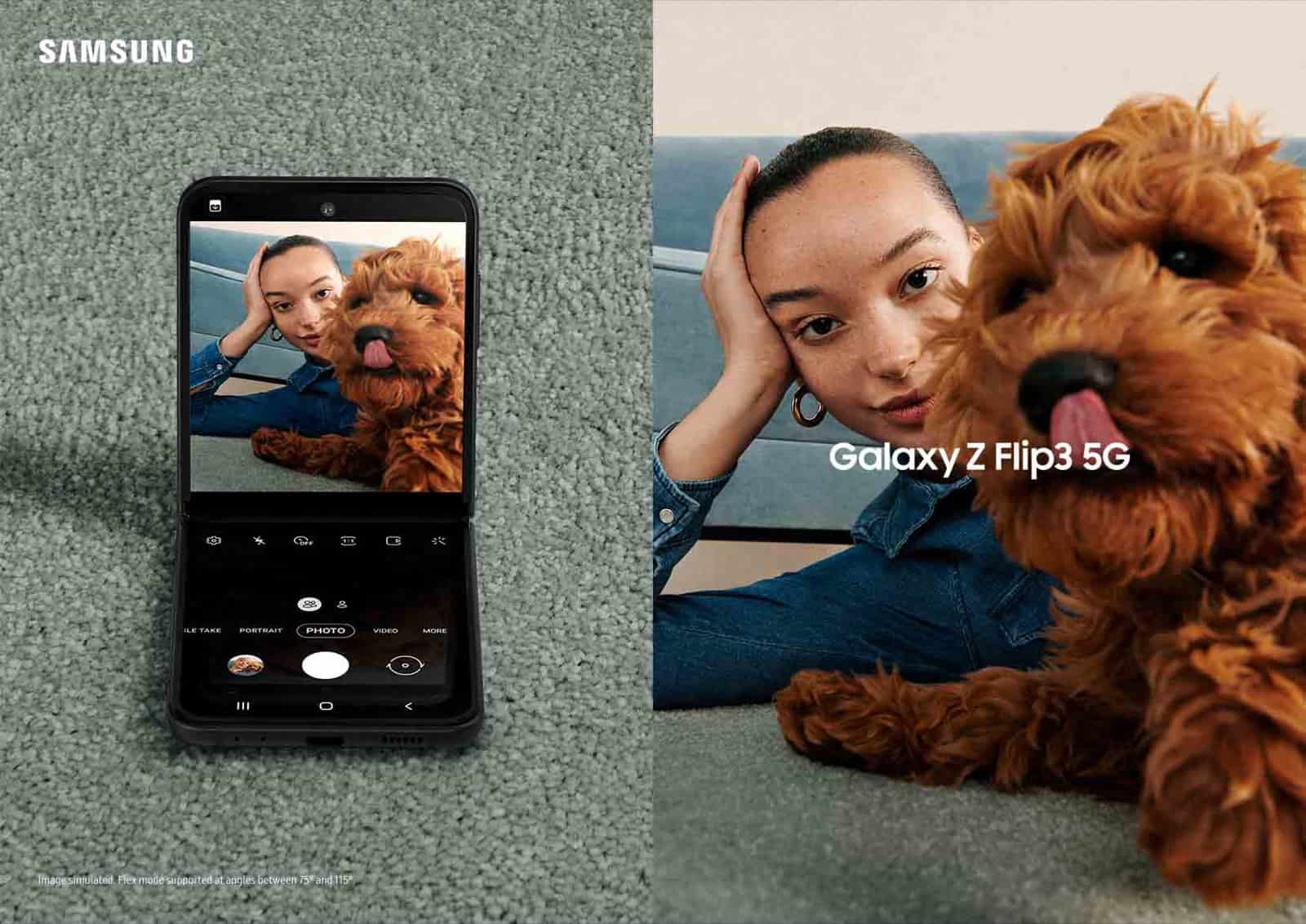 With the Galaxy S21 earlier this year, Samsung added some cool new features for Portrait mode. That included some AI-based improvements. Allowing the bokeh to look more natural. Now, that is coming to the Galaxy Z Flip 3 this year.

This works with Flex Mode too. So when you are in Flex Mode, the camera settings move to the bottom portion of the screen, with the upper portion being your viewfinder. Samsung said that on the original Galaxy Z Flip, about one in every five selfies was taken in Flex mode. So it is obviously very popular.

While talking about the cameras, you can still take selfies with the back cameras too. Using the Cover Display as your viewfinder as well.

The Galaxy Z Flip 3 is also getting 120Hz refresh rate on the main display now. Which puts it in-line with the other flagships from Samsung.

Like other flagships, this is an Adaptive Refresh Rate display. So it will not run at 120Hz all the time. This is done to conserve battery on the Galaxy Z Flip 3. And because you really don’t need 120Hz refresh rate when you are reading an email, or using the camera. But for scrolling and most other things, the 120Hz refresh rate will be very useful and look super smooth.

Samsung is also making the Galaxy Z Flip 3 a great phone to consume content on. It now has stereo speakers, and supports Dolby Atmos. Allowing you to watch your favorite YouTuber, or TV show on the go, with a great audio experience. Of course, pairing this with the Flex Mode panel makes it much easier to watch something and not have to hold your phone. 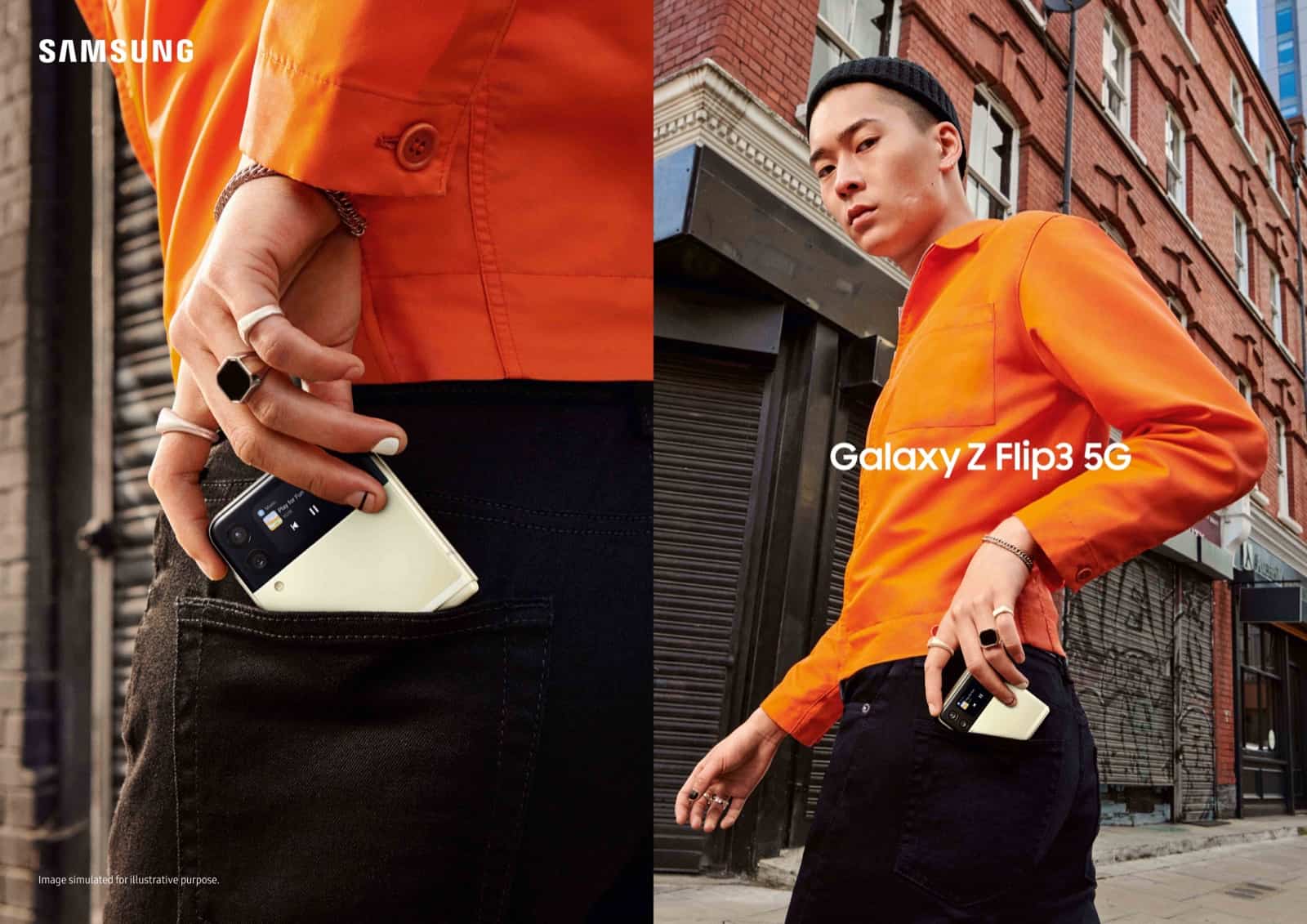 Should I buy the Galaxy Z Flip 3?

Samsung has made quite a few changes to the Galaxy Z Flip 3 this year, and has made it a pretty impressive foldable phone. But even though this is a much more durable phone than its predecessor, it’s still a foldable and is fragile. So keep that in mind before you do decide to purchase one.

At $999, the Galaxy Z Flip 3 is a rather impressive foldable. That puts it right at the same price of most non-folding flagship phones. And it’ll likely be cheaper than the Pixel 6. And it’s going to have a lot of people looking twice at the Galaxy Z Flip 3.