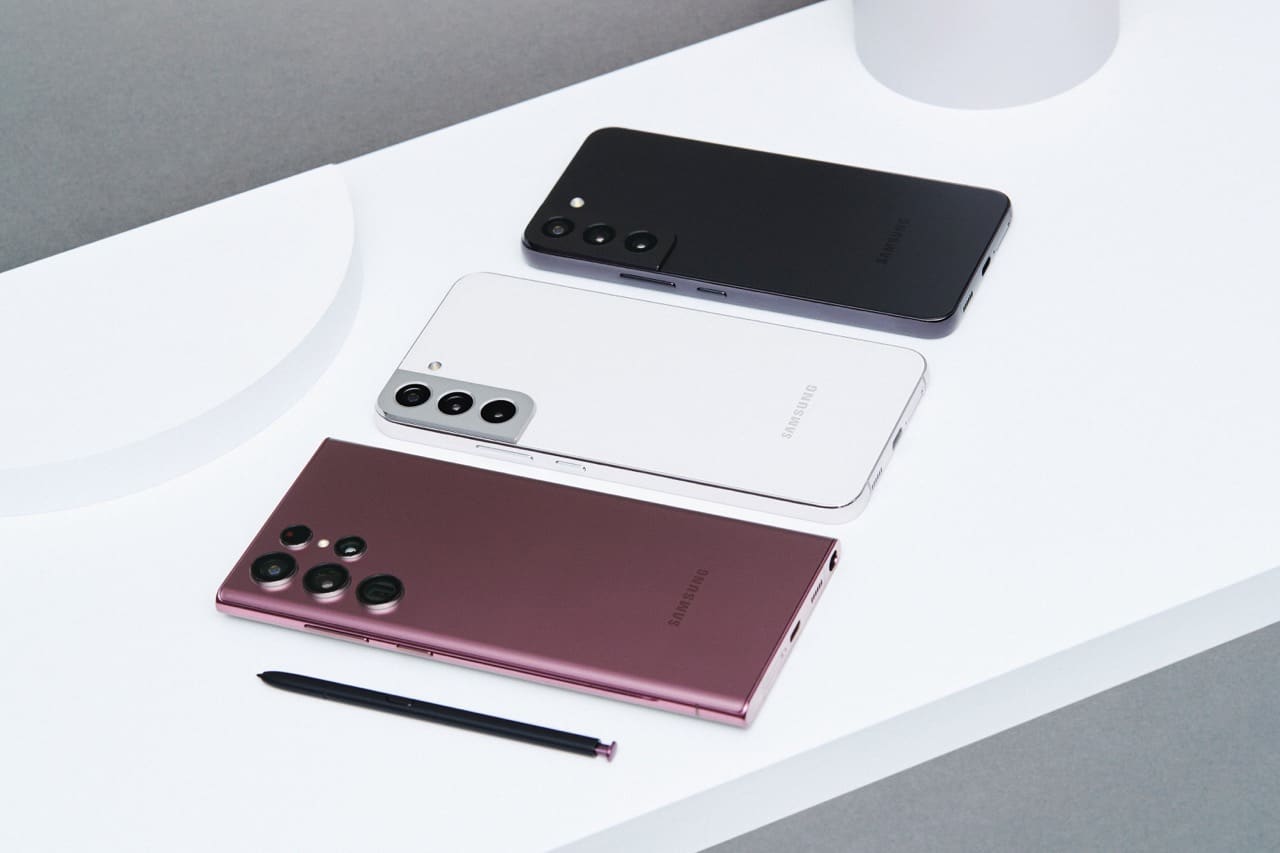 Samsung has announced three new flagship smartphones as part of the Galaxy S22 series. Those three devices are the Galaxy S22, S22+, and S22 Ultra, as expected, and in this article, we’ll share plenty of information about the three devices. We’ll try to help you make a purchasing decision, to decide whether one of them is for you or not. You’ll also get more information about their specifications, features, exact pricing, and more.

The Galaxy S22 and S22+ look basically the same, save for the size difference. The Galaxy S22 Ultra stands out, as it is a spiritual successor to the Galaxy Note series. These three phones aim at completely different types of consumers, and they are different in the size department as well. The price difference between the three models is also quite considerable. That being said, let’s get started, shall we?

How much does the Galaxy S22 series cost?

The Galaxy S22 pricing starts at $799.99, while the ‘Plus’ model’s pricing starts at $999.99. Do note that both devices will ship in both 128GB and 256GB storage options, so more storage will cost you more money. In the case of the Galaxy S22 Ultra, things are a bit different. Not only is it more expensive, but it comes in more different variants. The pricing of the ‘Ultra’ model starts at $1,199.99. That variant comes in both 8GB and 12GB RAM flavors. The 8GB RAM model comes with 128GB of storage (price listed above), while the 12GB RAM variant comes in 256GB, 512GB, and 1TB storage options. Needless to say, the more storage you want, the more you’ll have to pay. 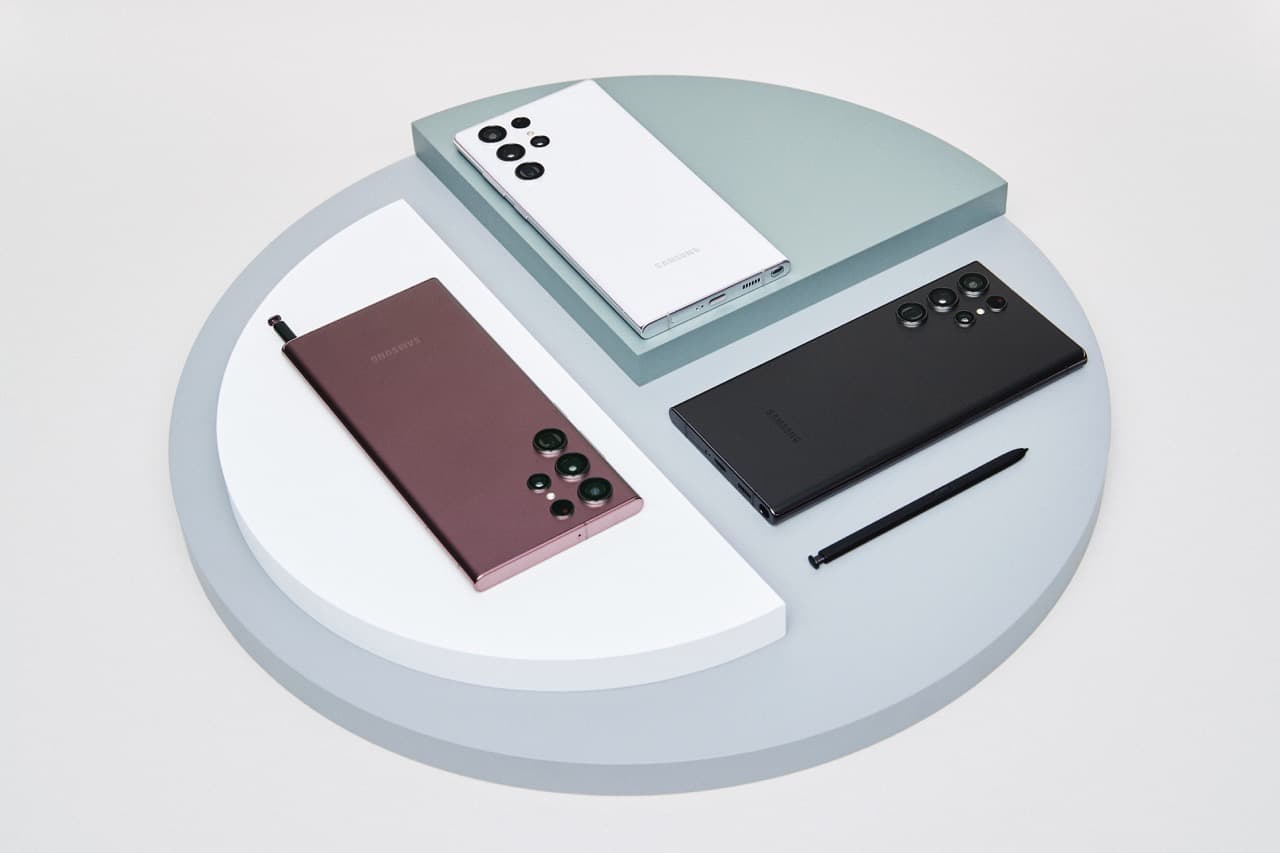 If you can, it probably wouldn’t be a bad idea to wait a bit. Based on what happened with previous Galaxy S series smartphones in the US, all three phones will likely get a discount in a month or two. That usually doesn’t have anything to do with poor sales, but it’s probably just a sales tactic. Regardless, chances are you’ll be able to save a couple of hundred bucks in a couple of months.

The US carriers will also offer their own promotions, we’ll update the article once that happens.

Where can I buy the Galaxy S22 series?

You can purchase the Galaxy S22, S22+, or Galaxy S22 Ultra directly from Samsung.com, and both carriers are retailers. All major retailers who usually offer Samsung’s smartphones will have the devices for sale, and that includes both Amazon and Best Buy. You will also be able to get them from T-Mobile, AT&T, and Verizon.

Which carriers will sell the Galaxy S22 series?

It has not been officially announced which carriers will sell the phone as of writing this article, but all three major US carriers are expected to do so. That goes for AT&T, T-Mobile, and Verizon.

All three Galaxy S22 smartphones come in four general color variants. Each of them have some added Samsung Shop exclusive colors. Let’s talk about the general ones first, shall we. The Galaxy S22 and S22+ are offered in the exact same shades. Those two phones come in Phantom Black, Phantom White, Green, and Pink Gold models. The Galaxy S22 Ultra, on the other hand, comes in Phantom Black, Phantom White, Green, and Burgundy flavors. 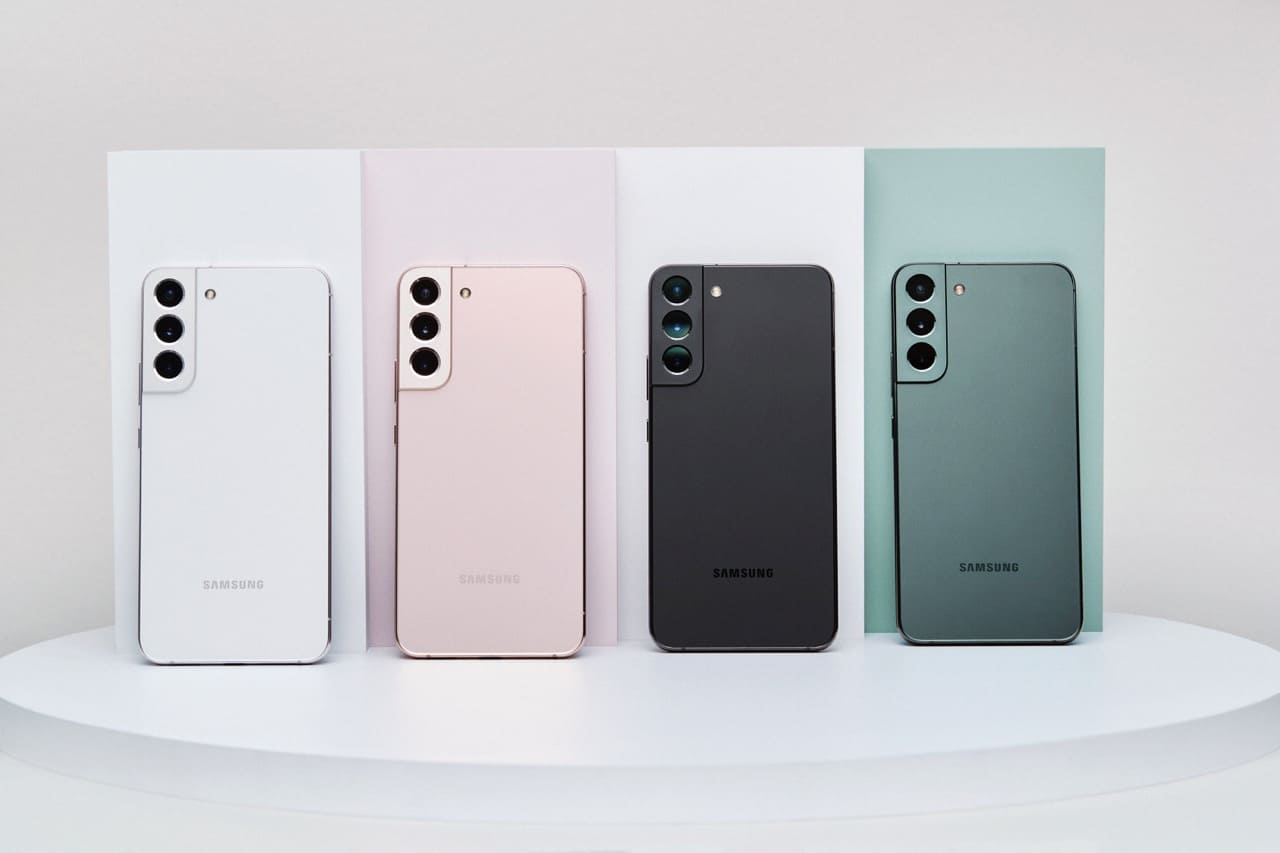 What are the specs of the Galaxy S22 series?

Below are the specs for all three models of the Galaxy S22 series. There are plenty of similarities between the three.

All three Galaxy S22 smartphones come with some notable new features. They, of course, include improved specs across the board compared to the Galaxy S21 series, but in addition to that, various new features. So, let’s talk about those.

Samsung says that its new smartphones come with improved camera performance. When it comes to the Galaxy S22 and S22+, which offer the same camera setups, Samsung mentioned “new Nightography features”. These devices feature a 23-percent larger sensor than their predecessor. On top of that, they offer the Adaptive Pixel technology. That tech will enable these cameras to let in more light, and gather more details at the same time, while keeping the colors really nicely balanced, even in low light. Both phones also come with “advanced VDIS technology”, which should minimize vibrations.

Samsung also emphasized that it improved portrait photo-taking capability here. Thanks to the AI Stereo Depth Map, your subjects should look better than ever. The company focused on the smallest of details in order to keep everything sharp. The aforementioned algorithm should take care of that.

The Nigtography features also apply to the Galaxy S22 Ultra. That handset comes with a different camera setup, and many would say an even more impressive one. It has a 2.4u pixel sensor, which is Samsung’s largest pixel sensor ever. The Galaxy S22 Ultra also comes with the advanced ‘Super Clear Glass lens’, which should help you take smoother and clearner nighttime video without flares. Video Auto Framing should help out as well. Samsung also mentioned that the Galaxy S22 Ultra is packed with AI camera features, and it offers you the ability to save photos in the RAW format up to 16bit.

All three Galaxy S21 series smartphones offered 25W wired charging, alongside 15W wireless charging, and Wireless PowerShare aka reverse wireless charging. Well, the Galaxy S22+ and S22 Ultra improve upon that. The Galaxy S22 still offers the exact same charging as the Galaxy S21 series, across the board. The Galaxy S22+ and S22 Ultra improve in the wired charging sector. Those two phones offer support for 45W charging now. Do note that a charging brick is not included in the box, so you’ll have to get one separately, if you don’t own it already.

Glass + metal finish across the board

All three Galaxy S21 phones offered a frame made out of metal. The Galaxy S21+ and S21 Ultra had glass backs, but the Galaxy S21 featured a plastic backplate. Well, that’s not the case this time around. All three phones combine glass and metal to feel as premium as possible.

The Samsung Galaxy S21 Ultra supported the S Pen. It did not ship with one, nor did it have a slot for it. Well, that’s not the case with the Galaxy S22 Ultra. This phone is a true spiritual successor to the Galaxy Note line. It not only ships with the S Pen, but it has a slot for it on the inside, as did the Galaxy Note series smartphones. Not only that, but this is the fastest S Pen Samsung offered to date. It has up to 70-percent lower latency. 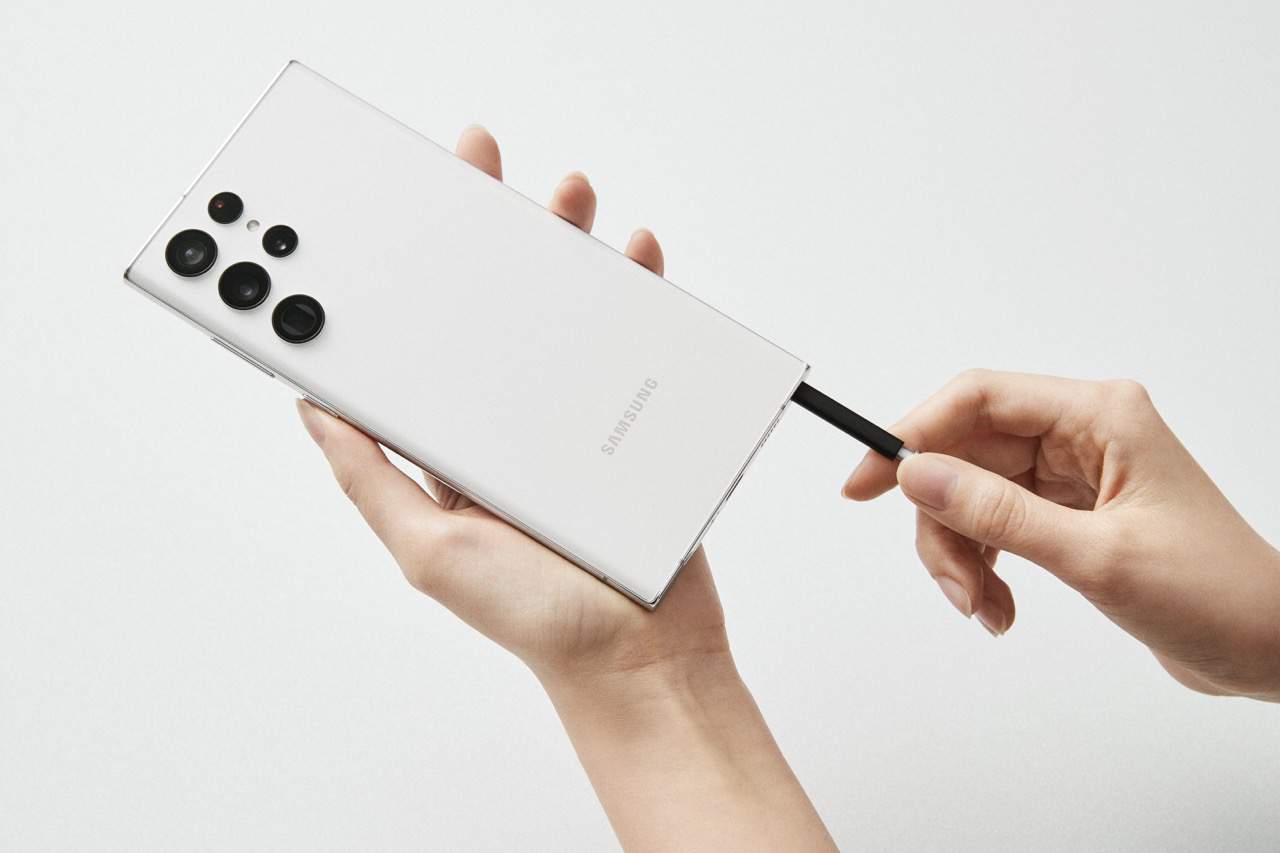 The Galaxy S22+ and S22 Ultra offer support for Wi-Fi 6E. Wi-Fi 6E can be twice as fast as Wi-Fi 6, presuming you have the right router, and that your Internet connection allows it. It is nice to see that Samsung included such tech here, though, readily available.

The Galaxy S22 series is “eco-conscious”

Samsung says that the Galaxy S22 series is the “most eco-conscious” lineup of devices the company ever released. It says that it pioneers mobile tech while it’s also supporting our planet. Needless to say, plastic pollution is posing a serious threat to our planet. So, Samsung decided to help out, even if just a little bit. It decided to turn to discarded fishing nets, which can be especially harmful to the oceans and seas. Samsung helps recover fishing nets, and transforms them into a high-performance material for the Galaxy S22 series.

The Samsung Galaxy S22 series smartphones are not cheap. On top of that, they’re quite slippery. So, many of you will want to protect them with a case. Well, you’ll be glad to know that Samsung has quite a few official cases to offer for its new smartphones. You can buy them from the links provided below this paragraph, and below that you’ll find details and images of each of the cases on offer.

This is exactly what you think it is, and many of you are familiar with them. Samsung has its own, official silicone case for sale for a number of models. That list now includes the Galaxy S22 series as well. You can get these silicone cases in several different colors for all three phones. 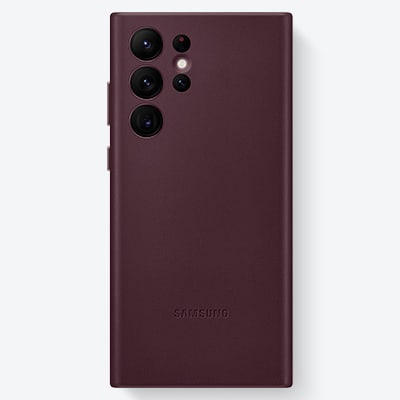 If you want a case that is also a bit fancy at the same time, the Leather Cover may be just right for you. As its name says, this is a leather case for your Galaxy S22 series smartphone. 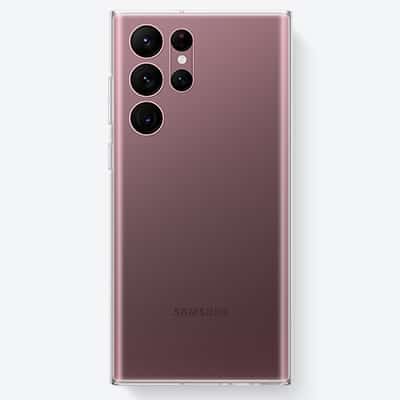 If you want a regular, see-through case, Samsung has that on offer as well. This is a rather slim case at the same time, so it’ll fit minimalists as well. 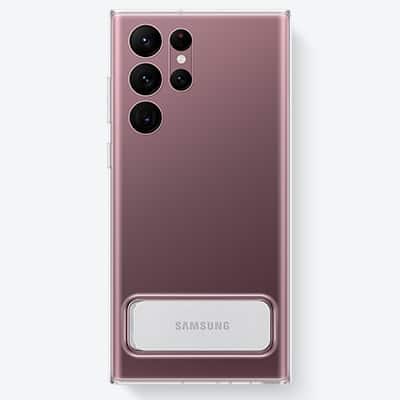 The second kickstand case, and the last case we’ll talk about here, is the kickstand case with a horizontal kickstand, which Samsung calls ‘Free Stop Hinge’. This kickstand is placed alongside the bottom portion of the phone’s back, and it’s placed horizontally. It’s more natural to use that way, as it’s likely you’ll use it most in landscape view. You can, however, use it in portrait mode as well. 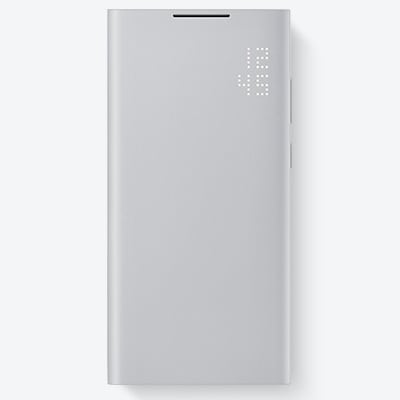 The LED View Cover is a case that covers your entire phone when closed. You can see call and text allerts on the LED cover, using icons you choose. You’ll need to open it up in order to use the phone, though, of course. 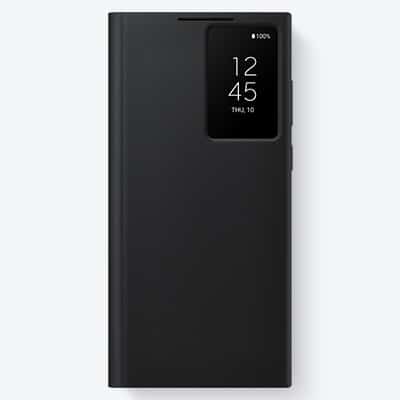 The S-View Flip Cover actually allows you to answer calls, pause your music, and more, when closed. All that without touching your display.

Some of you may remember that case with a strap for the Galaxy Z Flip 3. That case managed to attract a lot of attention to itself last year. Well, it is now available for the Galaxy S22 as well. It basically looks the same (design-wise), but it’s made for the Galaxy S22, it comes in a different shape. 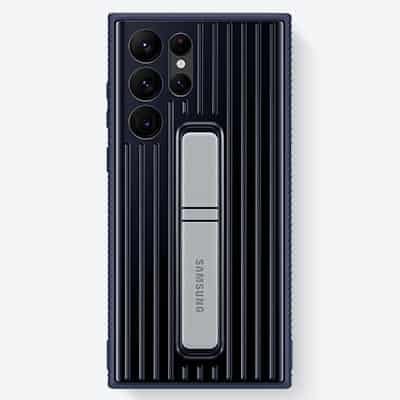 If you love having a kickstand on the back of your smartphone case, but would also like to remove it when you don’t need it, Samsung has a perfect solution for you. It offers a kickstand case with a removable kickstand. It comes in a number of colors, and if you get more than one, you can even mix and match kickstands.