Skip to content
Advertisement
Trusted By Millions
Independent, Expert Android News You Can Trust, Since 2010
Publishing More Android Than Anyone Else
15
Today
93
This Week
194
This Month
5415
This Year
115420
All Time
Advertisement The Samsung Galaxy S21 FE is on its way, Samsung pretty much confirmed that. Samsung even referenced the phone’s name on its official website, thus confirming it. The Galaxy S20 FE managed to become a huge success for Samsung, and many people are excited for its successor. The Galaxy S20 FE was essentially a budget flagship from Samsung, a contradictory smartphone. It was considerably more affordable than the company’s Galaxy S20 series, and yet it offered most of the same features and specs.

The Galaxy S21 FE is expected to follow in its footsteps. The expectations for this phone are huge, and quite a few details leaked already. The phone is expected to arrive in the next couple of months, we’ll talk more about that later in this Galaxy S21 FE preview article. The phone’s design did leak, along with some specs info, and some other tidbits that you may be interested in. Even one of the US carriers leaked it. That being said, let’s talk more about the device, starting with its design.

This article will be regularly updated with new information on the Samsung Galaxy S21 FE (this is a preview article) — both official teasers and credible leaks, rumors, and insider claims — as it becomes available in the run-up to the release of the upcoming Android smartphone. The last update was made on September 9.

The Samsung Galaxy S21 FE will look like a blend between the Galaxy S21 and the Galaxy S20 FE, essentially. Samsung has decided to combine the two designs to differentiate the Galaxy S21 FE from its predecessor. It’s a safe choice, and probably a good one. The phone’s CAD-based renders did surface back in April, showing us what we can expect. The device will have really thin bezels, while its bottom bezel will be a hair thicker than the rest. A display camera hole will also be included, and it will be entered, as it is on the Galaxy S21 series.

The phone’s design got revealed in several ways

The back side of the phone will feature that iconic-looking camera island that Samsung ushered in with the Galaxy S21 series. The thing is, it will only look the same, it won’t be the same. That camera island on the Galaxy S21, S21+, and S21 Ultra is an extension of the phone’s frame. It’s made out of metal. If you take a closer look at the CAD-based renders shown in the gallery below, you’ll see that’s not the same with the Galaxy S21 FE. Still, this looks quite nice and modern at the same time.

Chances are that the back side of the Galaxy S21 FE will be made out of plastic. The Galaxy S20 FE featured a plastic backplate, and Samsung is likely looking to do the same thing with the Galaxy S21 FE. That camera island on the back will protrude a bit, while Samsung’s branding will be included on the back as well. All the physical buttons will sit on the right, the power / lock button will be placed below the volume rocker buttons. The phone’s frame will likely be made out of metal. The device is said to measure 155.7 x 74.5 x 7.9mm (9.3mm with the camera bump). We’ve exclusively leaked an image which shows the Galaxy S21 FE ina ll four color variants. You can see that image below this paragraph. As you can see, purple, white, olive green, and black colors are shown here. Those color variants will be called different in the end, though, more on that later. 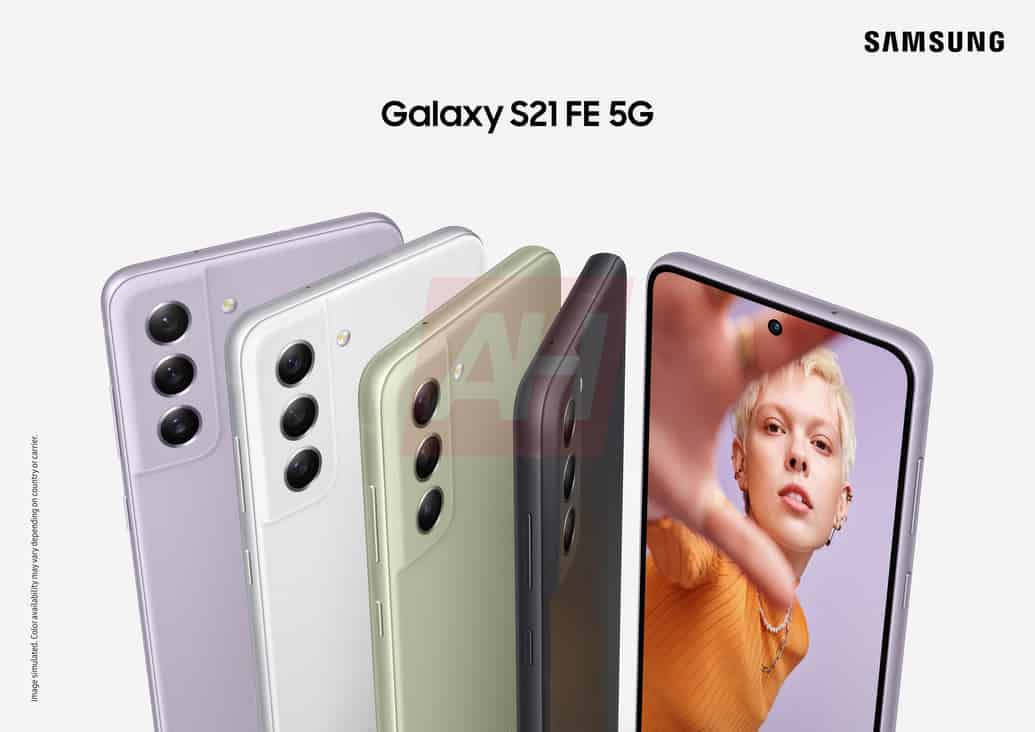 Samsung also posted an image of the device, by accident. The post has been deleted, but the image remained online, of course. If you take a look at it (provided below), you’ll see what seems a part of the Galaxy S21 FE’s back side. You can clearly see the color that is expected, and its triple camera setup. The design is kind of unmistakable, it looks the same as the one we shared (shown above). 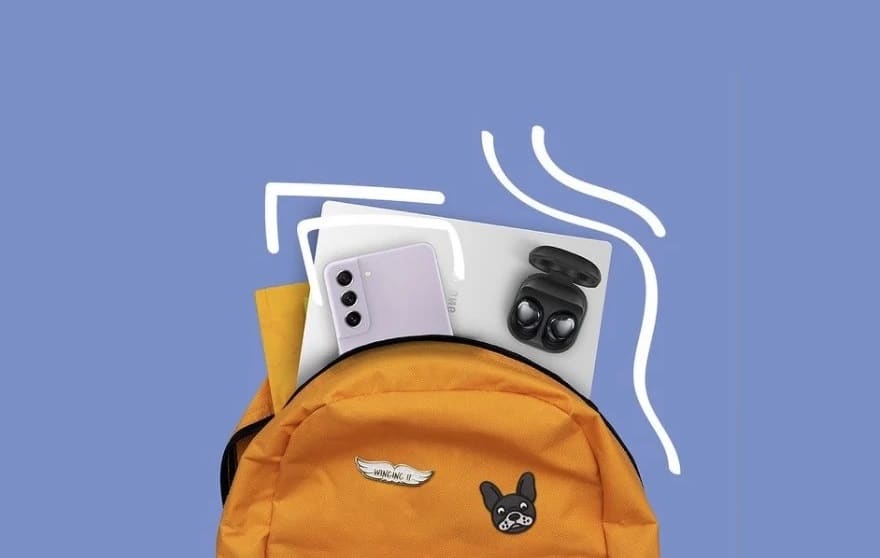 It will have powerful specs, and support fast charging

The Snapdragon 888 is expected to fuel the Galaxy S21 FE, the same SoC included inside the Galaxy S21 series. That is the most powerful SoC Qualcomm has to offer at the moment, by the way. Its inclusion got confirmed by both tipsters, and Google Play Console. Do note that an Exynos 2100 variant may launch as well. In addition to that, Samsung will likely include 8GB of RAM, a bit more than the Galaxy S20 FE offered. The 6GB RAM variant will also be available, though, as confirmed by a Geekbench listing. You probably won’t be able to expand the phone’s storage, though. Fast wired and wireless charging is also expected to be included here. The phone will either keep the same charging speed as its predecessor, 25W charging, or will bump that up to 45W, it remains to be seen. It got certified by the 3C authority and TUV already. 15W wireless charging will probably be supported, but we’re not sure just yet.

A 120Hz AMOLED display will be included

The phone will offer a set of stereo speakers, while it’s possible it will include a 6.4-inch display again. We’re not sure about that, as no info surfaced thus far, but it’s possible. The display may end up being a bit larger than that, but surely not smaller. You can also expect a fullHD+ panel here, with a 120Hz refresh rate. Its display will be flat, and it will be of the OLED variety. It probably won’t be an LTPO panel, but we’ll see.

Android 11 will come pre-installed on the phone, along with Samsung’s One UI skin, quite probably One UI 3.5. Three cameras will sit on the back of the device, and that’s something we’ll talk about in the next chapter, as some information did surface. Don’t expect a 3.5mm headphone jack to be included here, but the device will likely be IP68 certified for water and dust resistance.

Four cameras are expected, with a recognizable camera “island” on the back

When it comes to cameras, the Samsung Galaxy S21 FE will feature four of them. Three of its cameras will be placed on the back, while one will sit on the front. Not much information surfaced regarding its rear-facing cameras, but we will try and guess what’s coming. In regards to its front-facing camera, well, some info did surface. The phone is tipped to feature a 32-megapixel camera on the front. That is the same camera that the Galaxy A72 uses, actually. If Samsung ends up using the same sensor and lens, you can expect an f/2.2 aperture 26mm lens, and a sensor with 0.8um pixel size.

When it comes to its rear-facing cameras, the phone could end up sporting the same setup as the Galaxy S21. Those cameras and lenses may not be identical, but the setup will at least be similar. The Galaxy S21 sports two 12-megapixel units (wide and ultra-wide), and a 64-megapixel telephoto camera. That is what we’re expecting for the Galaxy S21 FE, well, that, or three 12-megapixel cameras. We’ll just have to wait and see. More information will likely surface in the near future.

The Galaxy S21 FE tipped to launch in October

Now, we’re still not 100-percent sure when will the device launch, but some rumors suggested it will arrive in August. The Galaxy S21 FE was tipped to arrive alongside the Galaxy Z Fold 3, Z Flip 3, Watch 4, Watch Active 4 Classic, and Buds 2. All those devices launched on August 11, during Samsung’s second large press event of the year. The first one occurred back in January, when the Galaxy S21 series got announced. Samsung is, allegedly, having issues with the chip shortage, and may postpone the Galaxy S21 FE launch to Q4. According to the latest rumor, the phone will launch in October with limited availability. On the flip side, a contrary report suggests that its availability may not be so limited. The latest report that arrived suggests the phone will become official on October 29. That info actually comes from a very reliable source, so it’s probably the most accurate. 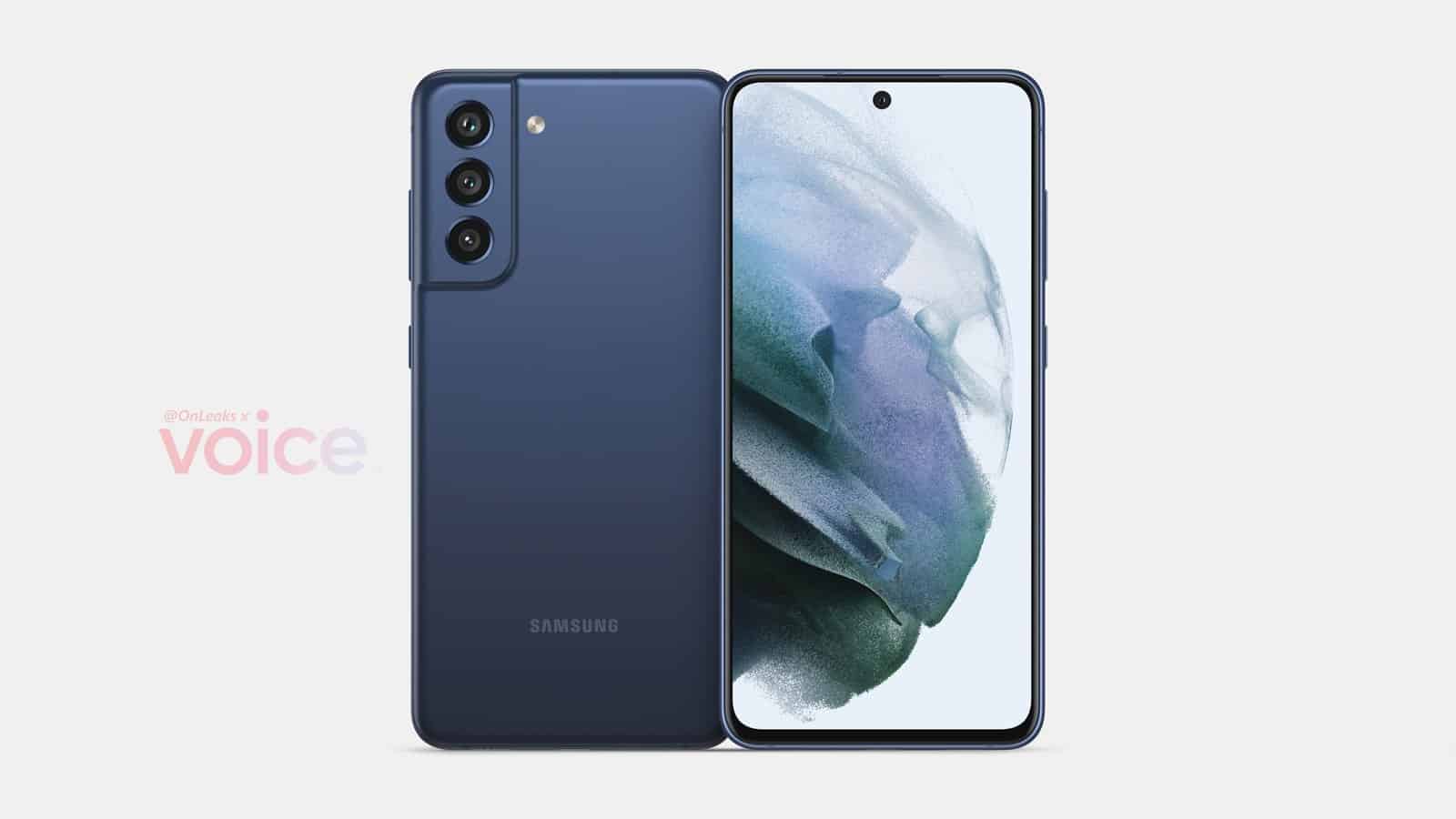 Samsung has no plans to announce a new Galaxy Note-branded smartphone this year, so all of these phones are supposed to step in to fill the void. The Galaxy Z Fold 3 is expected to become the replacement for the Galaxy Note device, and it will even support the S Pen this year. August 19 has been tipped as the possible launch date for all of these phones, so the Galaxy S21 FE may arrive then, unless its launch gets postponed.

It will arrive in four color options, allegedly

The Galaxy S21 FE color options have also been tipped in a rumor. The device will, allegedly, arrive in four color variants. Those color variants are Gray, Light Green, Light Violet, and White, as shown in the images below. A separate rumor tipped four colors for the T-Mobile variants as well, probably the same ones. Do note that it’s easily possible that not all color variants end up being available in all Galaxy S21 FE markets. Samsung may also announce some additional color options later on, who knows. The Galaxy S21 FE is allegedly supposed to replace the Galaxy Note series in 2021, kind of. When it comes to price, well, it may surprise you. The Galaxy S21 FE is expected to be between $50 and $100 more affordable. It has also been certified by Bluetooth SIG recently, suggesting that the launch is close.