At CES 2021, Roborock announced its latest robot vacuum, the S7. This is the start of a new line for Roborock, as we’ve seen with the S4, S5 and S6 before it.

With the Roborock S7, the company focused mainly on the mopping capabilities of the robot vacuum. Which was an area that really did need some improvement.

But the real question with the Roborock S7, is where does it fit in Roborock’s ever-growing lineup? And is it the best robot vacuum that Roborock has on the market right now? We’re going to aim to answer those questions and a lot more in this article, which will tell you everything you need to know about the Roborock S7.

What features does the Roborock S7 have?

As a reminder, the Roborock S7 does have LiDAR for navigation, which is super precise at mapping out your home. It also has automatic room recognition, Adaptive Route Algorithms, the ability to set no-go zones as well as multi-level mapping. To name a few. Below, are all of the new features that the Roborock S7 has incorporated.

The mop got a lot of upgrades on the Roborock S7. The two big ones are VibraRise and Sonic Vibration Technology.

VibraRise essentially lifts the mop up when it is vacuuming carpeted rooms, and when it is heading back to the dock. This way your carpet isn’t getting mopped. And it is not dragging a wet mopping pad across the clean floors. It’s a simple feature, but it is a game-changer. Most other robot vacuums will simply not vacuum on carpeted floors when the mopping module is installed. Or it will mop your carpets, which can get messy.

The Roborock S7 knows when it is on carpet, thanks to the new Ultrasonic Carpet Reconigition. So there are new sensors on the S7 to let it know it is on carpet. Instead of having the user add in a no-mop zone in the Roborock app.

With the addition of Sonic Vibration Technology, the S7 is going to be able to get up more messes off of your floor. Dried on messes, in particular. This is because it will now scrub up to 3,000 times per minute. In tests that we have seen, it does a really good job of cleaning up dried messes, which is something the S6 MaxV doesn’t do as well.

This is thanks to the 300mL electric water tank that is included with your Roborock S7 purchase. You can also adjust the water level that it is mopping with, in the Roborock app.

Roborock upgraded the floating brush on the S7. That’s the brush that is in the center of the vacuum. This brush has done away with the bristles that so much dirt and debris get caught in. Instead, it is now a rubber brush, which we’ve seen more and more robot vacuums adopting as of late.

The reason for this change is that the brush is now more durable, it is also capable of agitating better and much better at avoiding hair tangles. So you’ll need to clean the brush a lot less frequently.

Since the new floating brush sticks closer to the floor, it is able to clean better. This is especially important when moving around on uneven surfaces. And it means that less dirt, dust and other debris will get left behind. Of course, that also ties in with the next feature.

All of Roborock’s robot vacuums were 2000Pa rated for suction. Which is what forced the industry to make more powerful robot vacuums. With the Roborock S6 MaxV, Roborock pushed forward with 2500Pa. And now that power is available on the S7.

This increased suction means that it is going to leave less dirt, dust and other debris behind. The idea here is for it to leave nothing behind, but there’s always some very stubborn dirt that doesn’t want to come up.

This is very powerful suction, and makes it perfect for those with pets. As you will be able to get rid of all of that dog or cat hair. All of that will go into the 470mL dustbin, which is pretty large, for a robot vacuum.

What good is a robot vacuum with a tiny battery? Thankfully, Roborock has placed a 5200mAh capacity battery in the S7. This is going to give it enough power to run for around three hours on a single charge.

That battery life is based on the “balanced” or “quiet” mode, which doesn’t use as much suction. So do keep that in mind. If you’re using “Turbo” or “Max” you’re going to get less runtime out of this robot vacuum.

Another feature that is related to the battery on the S7, is the auto-top up feature. So if the Roborock S7 is almost done, but knows it needs some more juice to finish, it’ll go ahead and top up, and then finish the job for you. So you aren’t left with a house that is only half cleaned. At least not for long.

These features all make the Roborock S7 a very impressive robot vacuum.

What about a self-emptying dustbin?

Roborock did announce a self-emptying dustbin. It launched later in 2021, compared to the Roborock S7. The Auto-Empty Dustbin will work with future Roborock robot vacuums. But as of right now, it only works with the S7. 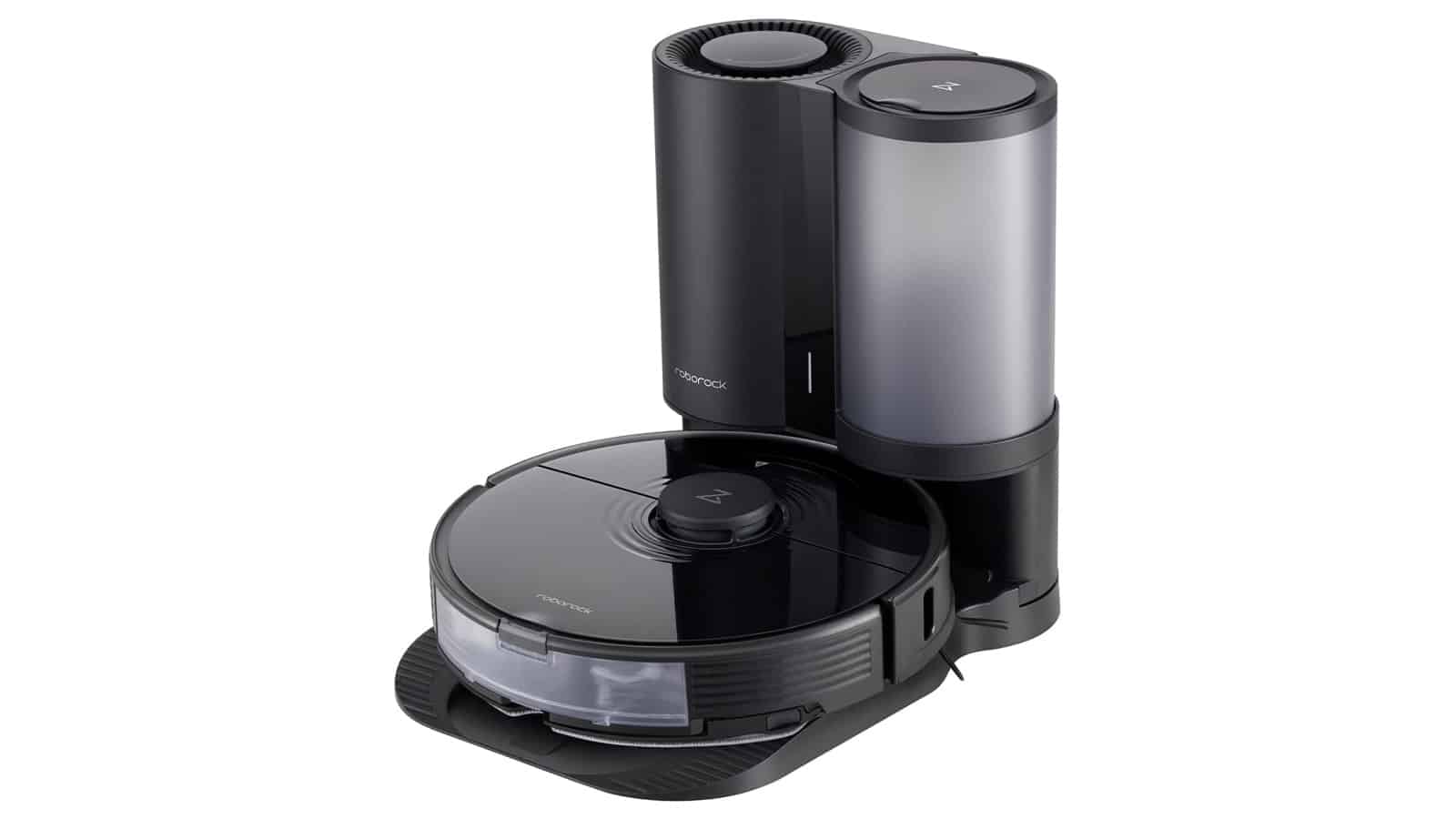 The Auto-Empty Dock is really impressive actually. It can empty your S7 every time it docks, and do it for up to eight weeks without needing a new bag. In the US, the Auto-Empty Dock uses a dust bag to hold all of the dirt and dust. Meanwhile in Europe customers have the option to go bagless or use a dust bag. And in China, the only option is to go bagless.

You can learn more about the Auto-Empty Dock here.

What features does the Roborock app have?

The Roborock app is very easy-to-use, even for those that are not tech literate. Roborock has done a good job of laying everything out pretty easily, so anyone can use it, without any issues.

You can see the map of your home, and see where the vacuum has cleaned, and where it still needs to clean. With the S7, the Roborock app will also show you which rooms are carpeted, thanks to the new sensors included on the S7. This makes it easier to manage where the S7 is cleaning. And means you won’t need to add any no-mop zones, as the S7 knows not to mop there.

The app also allows you to set the cleaning intensity. So you can adjust the cleaning modes on a by-room basis. Maybe the kitchen is a lot dirtier than the rest of the house, you can set it to use more suction and more water, vibration strength on the mopping side in the kitchen, versus the rest of the house. There is also a “deep mopping” mode available for a very deep mopping.

There is also now advanced scheduling available. So you could have the S7 clean certain rooms at a certain time, and then set the other rooms for another time.

Finally, voice control is available for Roborock robot vacuums. It works with both Amazon Alexa and Google Assistant. So you can use your personal assistant of choice to tell the robot vacuum to start cleaning.

How does the Roborock S7 look?

The design of the Roborock S7 hasn’t changed a lot, versus the S6. It still has the round module on the top for the LiDAR navigation. Along with three buttons near the front. Which are used for starting/stopping the vacuum, sending it home and for spot-cleaning. So you technically don’t need the Roborock app to use the vacuum, but it does make the experience a whole lot better. There is also an arc LED light at the front of the vacuum, to let you know the status of it.

Roborock S7 comes in two colors, like most of the other robot vacuums. That’s black and white. And it appears to have a matte finish, instead of a shiny look. Which means that it should collect dust and dirt less than previous models.

The design isn’t much of a departure from previous Roborock robot vacuums, but there are some bigger changes on the bottom of the vacuum. For one, the new brush, without bristles is there. Which is now closer to the floor. It also has a few new sensors included, for the new mopping features.

On the back, there is a new release for the mopping module. It’s now higher up than in previous models.

Roborock has basically stuck with the same design because it works. And why change it, if it works as intended?

What sensors are on the Roborock S7?

On the Roborock S7, you’ll find six cliff sensors, around the edges of the vacuum. This is to prevent the S7 from taking a tumble down the stairs or falling off of the floor it is on. It also has a bumper along the front half of the vacuum, so that if it does hit something, it won’t damage the robot vacuum.

There’s also the new carpet detection sensor that is included, and as the name indicates, it helps the S7 figure out whether it is on a carpeted floor or not.

How much is the Roborock S7?

The Roborock S7 will cost $649. Making it one of Roborock’s more expensive robot vacuums, but far from the most expensive on the market. iRobot has a few that are over a grand.

The S7 is still pretty affordable, despite it being brand new, with plenty of new features included. Which is impressive for Roborock.

In the box, you’ll get quite the haul, which is another area where Roborock stands out compared to the competition.

You will of course get the S7 robot vacuum in the box. But you also get the charging station, a cleaning tool (which lives underneath the flap that covers the dustbin), a spiral brushroll (one, no repelacement brush), dust bin, HEPA filter (two, including one replacement), mopping pad (this is washable, but no replacements are included) and the user manual.

Roborock typically includes a few replacement parts, so you won’t need to buy them anytime soon. Which is really useful.

When will it be available? And where can I buy it?

Roborock launched the S7 robot vacuum on March 24, and it is only available from Amazon.

You can buy the Roborock S7 by clicking here.

Should I buy the Roborock S7?

It’s arguably the best robot vacuum on the market right now – when it releases in late-March. At one of the best prices on the market. Where most other robot vacuums are well above $649 for similar features and functionality, this is almost a no-brainer.

The Roborock S7 is going to allow you to permanently get rid of your non-robot vacuum. And that’s saying quite a bit, since most of us do have a non-robot vacuum laying around, to clean up what the robot vacuum might have missed.

It competes very well with the iRobot, Neato and other robot vacuums on the market, but none of the competition has as much suction or uses as much scrubbing power as the vacuum and mop (respectively) on the Roborock S7.