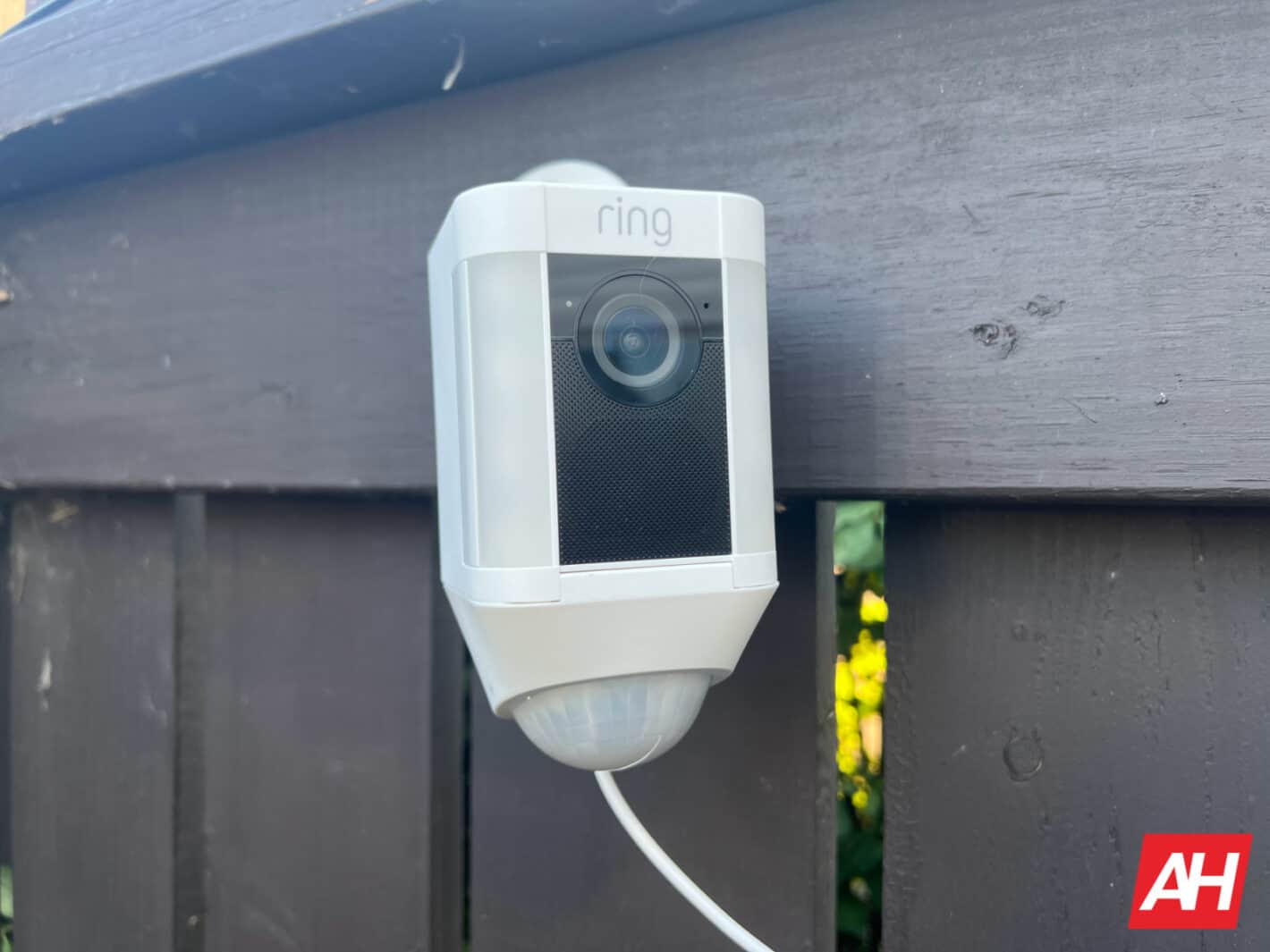 Ring is likely the first name you think of when you think about video doorbells. While they weren’t first with the video doorbell, they have made them popular. Of course, a big reason for that is their parent-company – Amazon – who has a vested interested in everyone having a video doorbell. That interest is, to keep the porch pirates at bay. As stolen packages do cost Amazon a pretty penny.

These days, Ring does a lot more than just video doorbells though. It also has security cameras, lighting, security systems and so much more. So today, we are going to tell you everything you need to know about Ring, and whether you should buy any of their products for your home.

In 2012, Jamie Siminoff created a video doorbell, and called it Ring. Six years later, Amazon purchased the company for around $1 billion. It wasn’t all easy going for Ring though. The company actually went on Shark Tank in 2013, and was ultimately rejected. Of course, they got redemption when Amazon came calling around 2018. And since then, Ring has become one of the biggest names in the smart home industry.

Ring started out by making a video doorbell. The thought here was security. Seeing what’s going on outside of your home, when packages are delivered and such. However, since then, Ring has evolved to do a lot more than just video doorbells. As mentioned before, Ring now has a bevy of security cameras for inside and outside of your home. It also has a DIY security system, and some smart lights (some that rely on solar) for your home too.

Shortly after Amazon bought the company, in 2018, Ring launched Neighbors. It’s a neighborhood app that can be used to post criminal activity and keep your neighbors aware of what’s going on. You are able to post footage straight from your cameras and warn people. You don’t need to have Ring devices in (or outside) of your home to use the app though.

Do they partner with law enforcement?

Over the years, there’s been a lot of talk about Ring providing footage from its cameras to law enforcement without the consent of the user. So why does this happen? Well, because Ring does have partnerships with law enforcement agencies.

These partnerships happen in an exchange. Here’s how it works:

It sounds a bit sketchy, however, this does help to keep your community safe. If you’re worried about police having access to your camera feeds, just keep your cameras outside of your home. Since that is public area (and shown on Google Maps, among other things), it’s not as big of a deal if the Police are seeing this footage, versus footage from inside your home.

How many Police Partnerships does Ring have?

Basically, they create dummy Amazon packages (with the packages and tape provided by Amazon) and putting these packages on doorsteps equipped with doorbell cameras. The explicit goal here is to catch someone stealing a package on a Ring doorbell camera and arrest them.

These stings have occurred in a few cities. These include Hayward, CA; Aurora, CO; Albuquerque, NM; and Jersey City, NJ.

What products does Ring currently have?

Ring’s current products basically slot into four categories: Doorbells, cameras, alarms and smart lighting. They are constantly putting out new hardware, that is better and with more features. You know, like every tech company does. These products all work together quite well, within the Ring app. And also with Alexa. Since Amazon owns Ring, its products really only work with Alexa. Though there is some talk about it working with Google Assistant and the “At A Glance” widget on Android phones in the near future.

Here are the best products that Ring currently has. 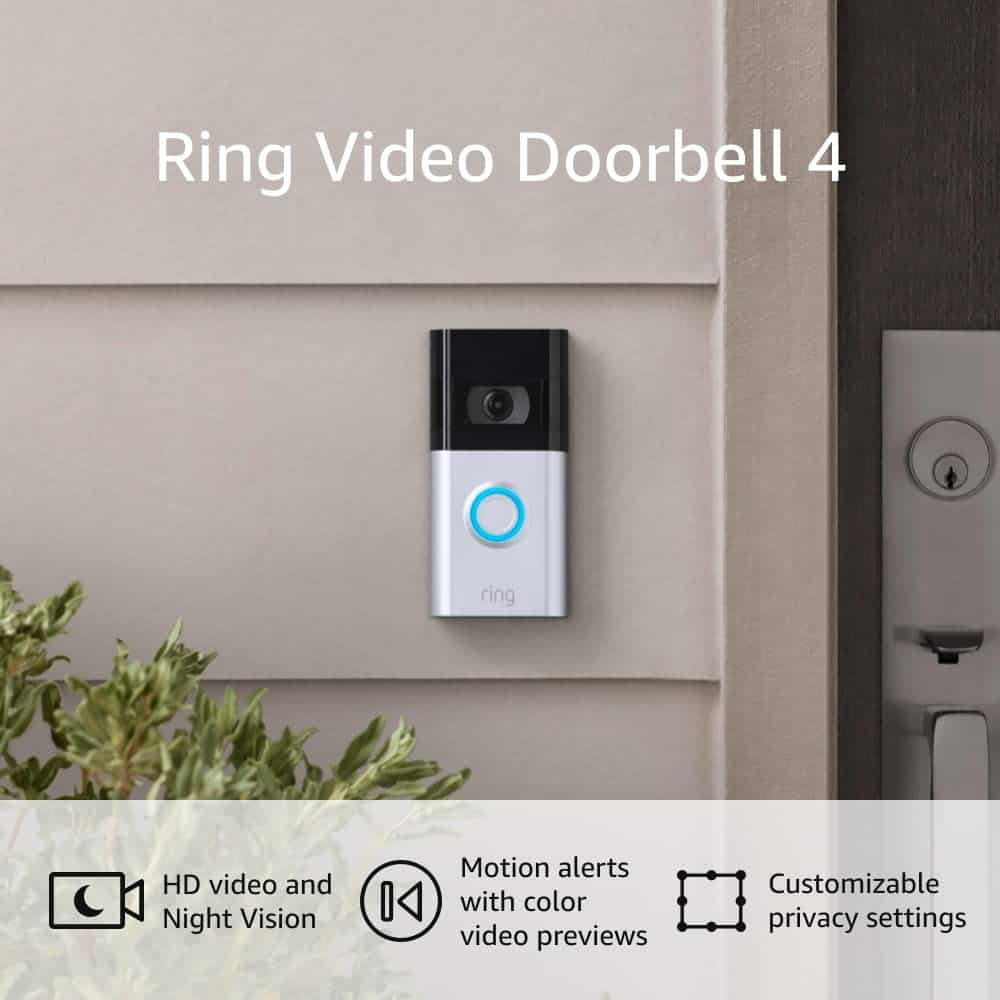 The Ring Video Doorbell 4 is the most current doorbell from Ring, and it will cost you $219 normally. This doorbell has improved 4-second color video previews and it also has easy installation. Ring has included its new quick-release battery on this one, so you can quickly pop the battery out to charge it. No tools required. 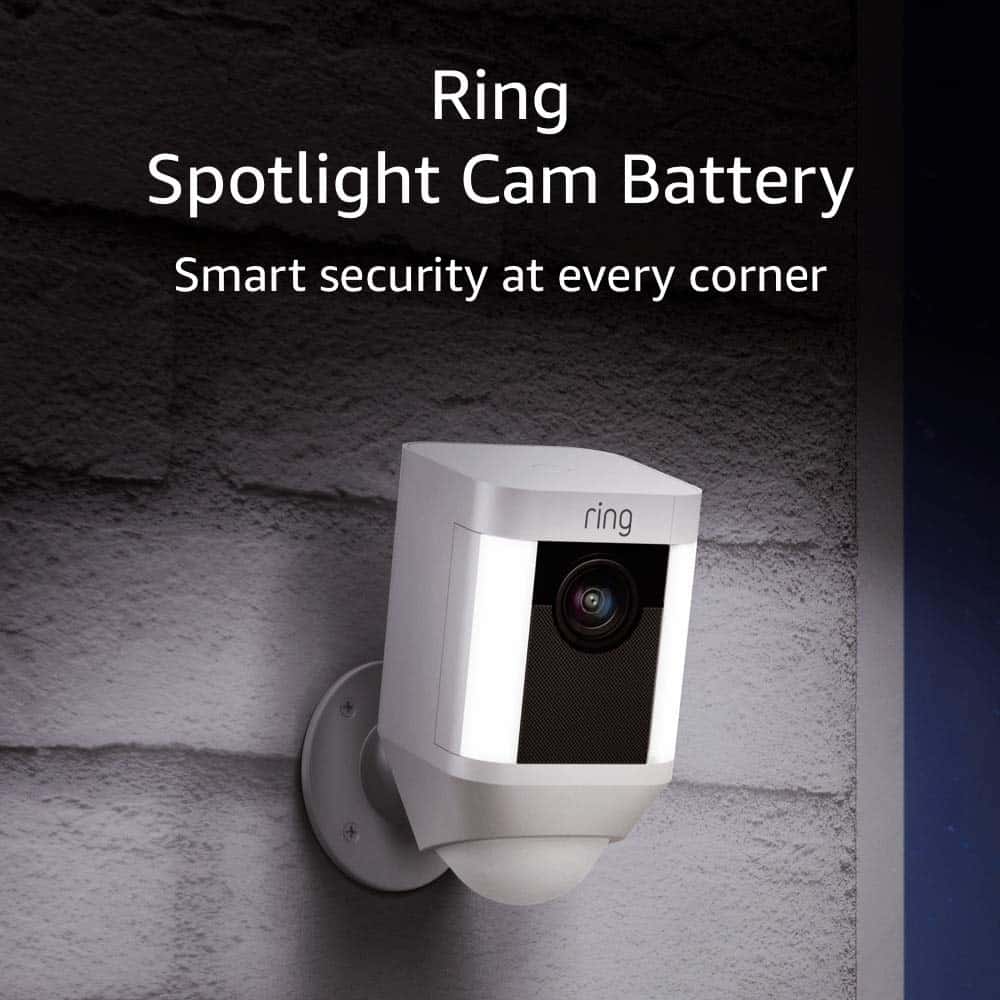 This camera from Ring is really impressive, because it is like a smaller floodlight that’s wireless. It’s not quite as bright as a floodlight, but those lights on either side of the camera can get super bright. They will activate when the camera sees motion. There’s also two-way talk included here, and a siren alarm to scare people off. 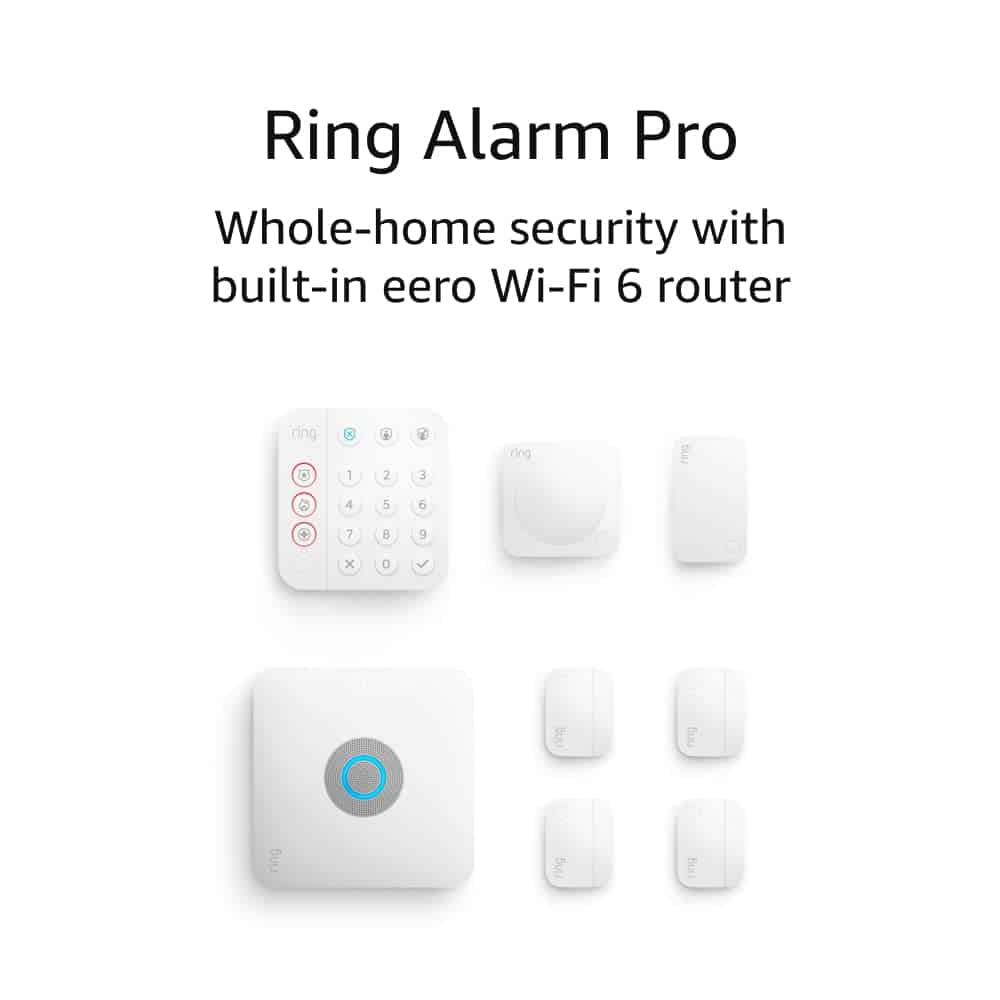 The Ring Alarm Pro is one of the best DIY security systems you can get, and you don’t have to pay for monitoring either. The kit includes the base station, a keypad, contact sensors for windows and doors, and a motion detector. Ring sells this in a 8-pack, 12-pack, and a 14-pack. Which varies how many motion detectors and contact sensors you get. You can also buy these separately. The Pro alarm also has an eero 6 WiFi router built into the base station for improved connectivity. 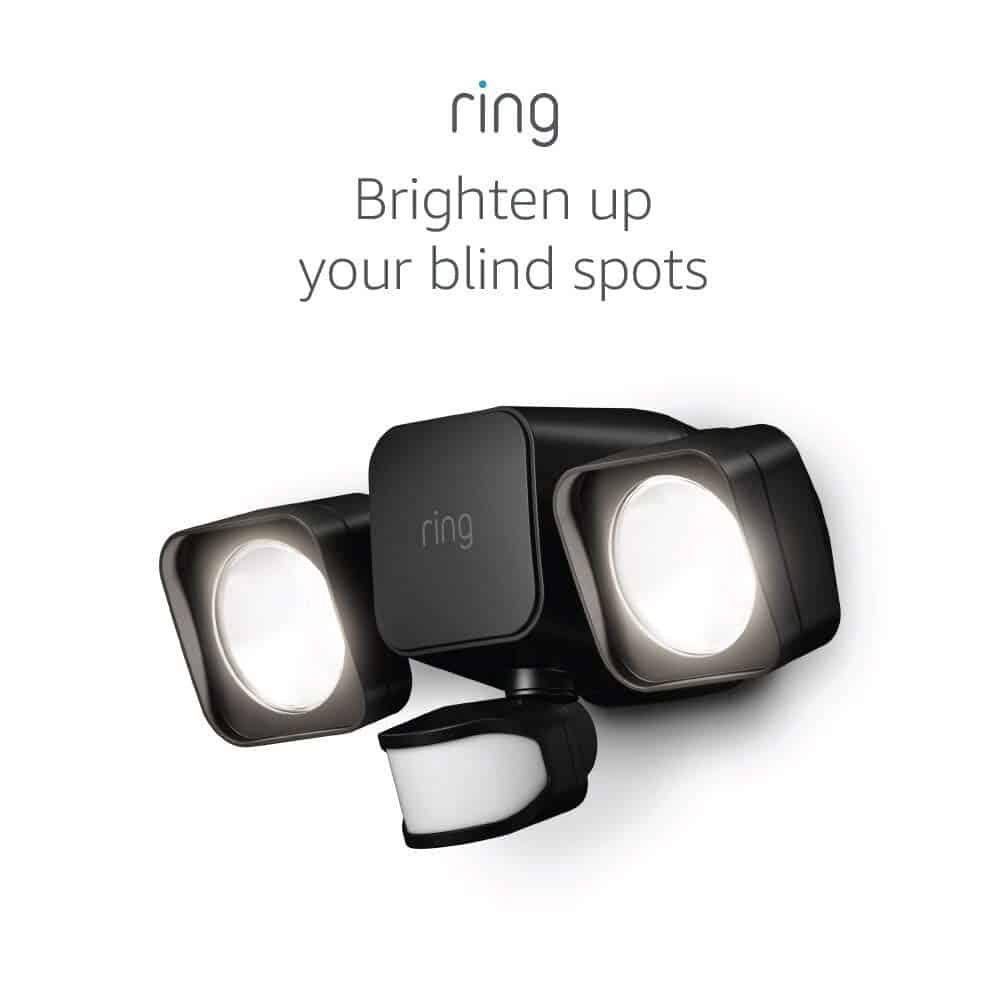 Speaking of floodlights, there is a Ring floodlight here without a camera. This is a smart floodlight and will only turn on when it senses motion. It does require the Ring bridge however, which is an additional cost. Ring announced a new product at IFA 2022 in September, which is an Intercom. It’s meant to work with your existing Apartment intercom and provide you with some smart features. Like the ability to remotely unlock the door to your building, and automatically let some verified users in. It’s coming to Europe first, and it’ll launch in the US in 2023.

Can I view my Cameras in the Alexa app?

Once you set up your Ring products, you don’t actually need the Ring app anymore. As you can do everything in the Ring app, through the Alexa app. Which might make things easier for those that are older. So you can just stick with one app.

In addition to that, you can bring up your camera feeds from different Ring cameras on your Fire TV, Echo Show or any other Alexa-enabled device. You can even get notifications on your TV, if you are using Fire TV, when someone is at the door. Which is super useful.

Can I share my Cameras with other family members?

Yes, you can easily share your Ring products with other family members, within the Ring app. Just add their email address and they’ll get a link to join your “home”.

Ring also gives you the option to choose which cameras you share with them. So you can stick to just providing them with your doorbell, or a camera, or everything that you have in your home.

This is a much better way to do it, rather than sharing a login for your Ring account. As that would make it more likely that your stuff could get hacked and stolen.

How do I know when the camera is recording?

Most video doorbells do something similar, Nest will flash the white light around the button on the doorbell, which is a bit more obvious that it is recording.

Keep in mind that Ring is not recording 24/7, unless you set it that way. Ring only records when it sees motion or people in its zone. This way you’re not getting hours and hours of empty footage where maybe the trees moved from the wind. It also conserves battery life on your camera. Allowing it to last months on a charge instead of a mere days.

What is Ring Protect?

So what’s the difference between these three plans? Let’s go over them. 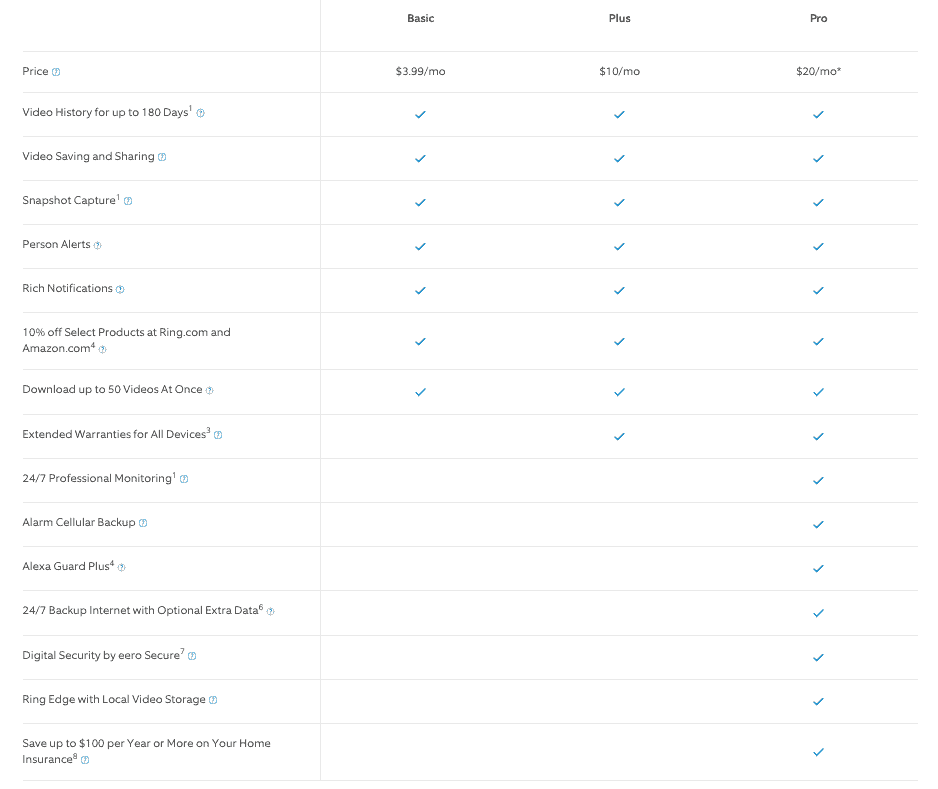 The Basic plan is basically meant for just a single doorbell or camera, and it’ll be fine for most people. It’ll give you access to video history for up to 180 days. Allow you to save and share video, get person alerts, rich notifications and download up to 50 videos at once.

The “Plus” plan is geared more towards those that are using more than one Ring device. Say a doorbell and a Spotlight Camera. It includes everything int he Basic plan, but across multiple cameras. And it also adds an extended warranty for all your devices.

Finally, the Ring Protect Pro plan is made for all of your cameras, and the Ring Alarm with professional monitoring. So you get everything included in Ring Protect Plus along with many features that come with professional monitoring of the alarm system. That includes Alarm Cellular Backup, Alexa Guard Plus, Digital Security by eero Secure, and you can even save up to $100 or more per year on your home insurance with this.

Should I use Ring to protect my home?

The partnerships with law enforcement that Ring has is a big deal, which is why we dedicated a big part of this article to that. Ring providing your footage without your consent is reason for alarm. But as long as you’re using the cameras outside of your home, I don’t think this is a big deal. That’s public space that police can see anyways, with the many cameras around town.

Ring is typically cheaper than Nest, and has many more features available when compared to Nest. So it is likely the better option for most people.