The Right to Repair has become a very popular subject in the past decade or so, but only recently has it really made some waves. With both Apple and Samsung making it easier for customers to repair their devices, and States starting to pass their own laws for Right to Repair.

It’s really as simple as it sounds, the right to repair anything and everything that you own. This is something that has been primarily an issue in the US and European Union.

What is ‘Right to Repair’?

The Right to Repair basically refers to the concept of allowing users to freely repair the product(s) in case of any type of issue. There are four requirements that are of particular importance:

Originally, the Right to Repair was driven mostly by the automotive industry. But it has now expanded to basically every industry. A big part of this is due to the tech industry. Especially smartphones. Those screens shatter, but that doesn’t mean the rest of the phone needs to be tossed out, creating e-waste. But getting that screen replaced can cost a few hundred dollars, unless you do it yourself. And that’s where the Right to Repair lives.

The main goal of Right to Repair is to favor repair over replacement. As mentioned, replacing something because it has a broken part, leads to a lot of e-waste, and the world already has a lot of that.

Brief history of Right to Repair

The Right to Repair is actually not new, not at all. The earliest history starts in the 1920s. Which started with automotive companies moving to make it harder to do independent repairs. GM was behind that, with executive Alfred P. Sloan suggesting that continuous changes to its models on a year over year basis would fuel demand for customers to replace their vehicles sooner. Ford, on the other hand preferred a simple and easy way to replace parts.

In the 1950s, many manufacturers started making it harder to get access to parts and not just automotive companies.

In 2008, the US Supreme Court favors a class action lawsuit challenging carriers’ policies against unlocking phones. In 2012, Massachusetts passed a right to repair act for automobiles. And then in 2014, South Dakota passed a Digital right to repair bill.

Now in 2022, we’re seeing many more States looking at Right to Repair and looking to pass some legislation there as well. So it’s nothing new, but it has become a much bigger deal in recent years, compared to the 1920s.

Does my State have an active Right to Repair bill?

They might. If you head to this website, you’ll learn more about the different Right to Repair bills, and which states have active bills being considered, which ones had them historically, and which ones never had them. 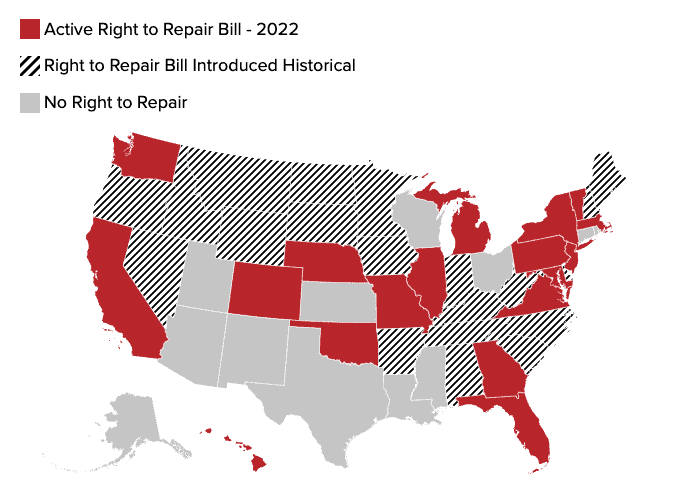 Currently, these States have active Right to Repair bills:

Do people even care about Right to Repair?

Most normal consumers probably don’t care. They aren’t going to replace a battery in their smartphone themselves, which isn’t totally what Right to Repair is. It is also allowing third-party repair shops to fix your products. Instead of having to go directly to Samsung to fix your Galaxy Z Fold 3. You could go to one of those mall kiosks (you know the ones I’m talking about), and get it fixed there, for a much cheaper price. And usually faster to. 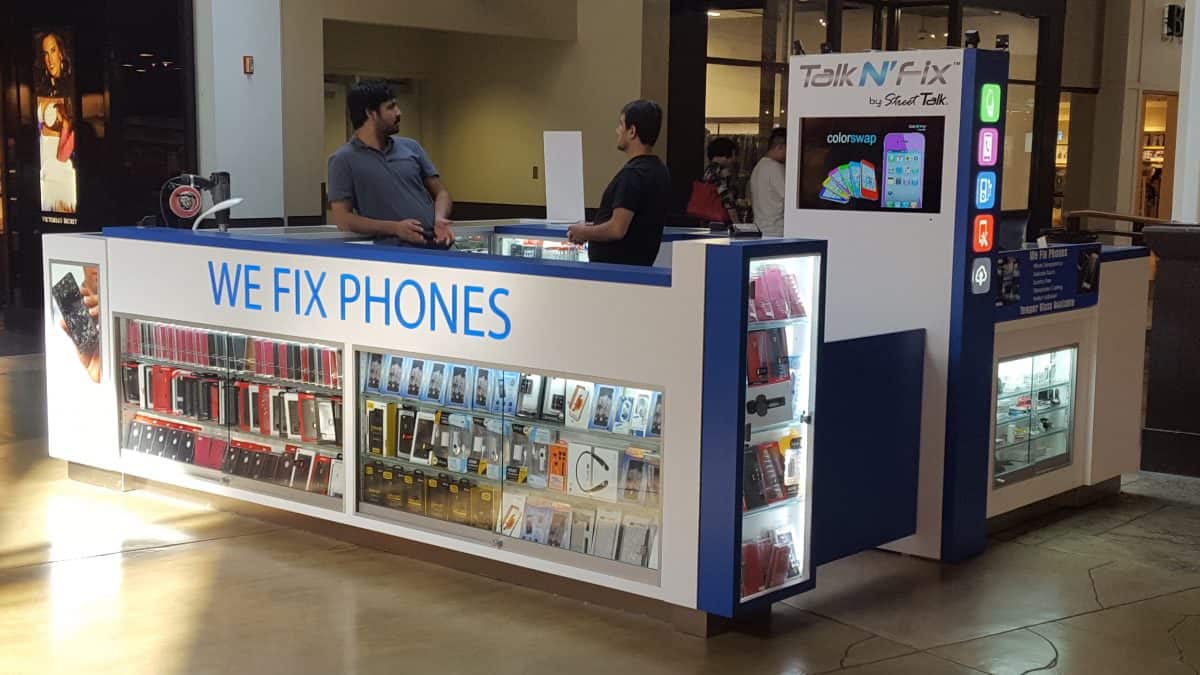 Right to Repair is going to allow that mall kiosk to use genuine parts for your Galaxy Z Fold 3 too. So it’ll be fixed like it’s brand new. As well as allowing the person to have instructions on how to do it properly.

Now as you can imagine, that does eat into a company’s sales and profits, especially one like Samsung or Apple – the two biggest smartphone makers in the world.

Companies have fought against it for years

Manufacturers will employ many different tricks to make it nearly impossible to repair your device yourself, should something go wrong. By using proprietary screws, not publishing repair documentation or even gluing parts together.

iFixit has been great at showing us how well some products are to repair and how bad others are. The iPhone typically has some of the worst repairability scores from iFixit. They also sell some great kits to help you repair your devices and also some great repair guides.

Smartphones use a lot of glue internally, and that might not be to keep you from repairing it yourself. But because there’s so many little parts inside and most screws wouldn’t really work that well. But it could also be to fight against the Right to Repair. 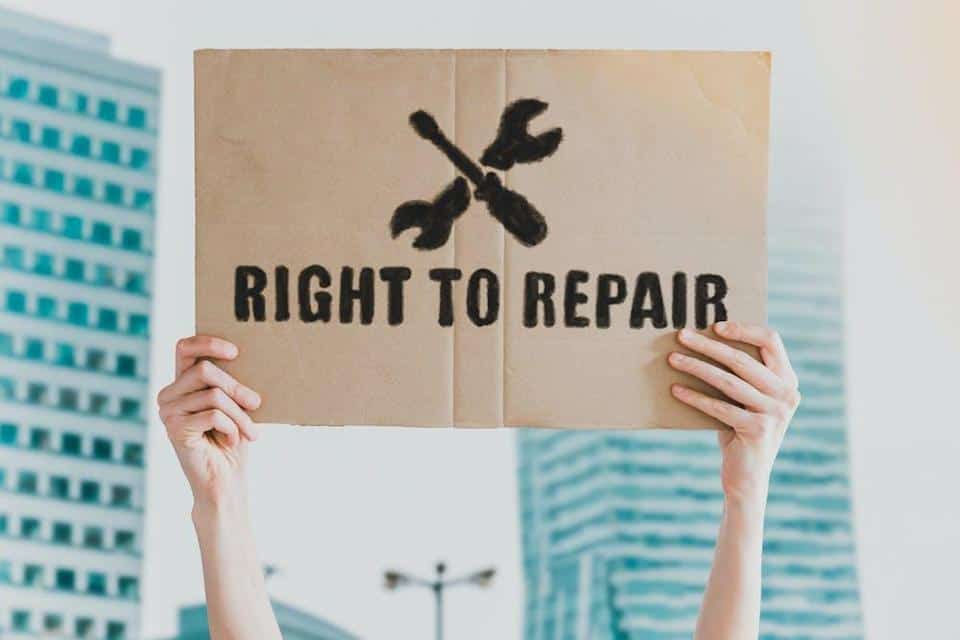 Why would anyone be against the Right to Repair?

Companies lobbied against a Right to Repair law in New York state back in 2018, these included Facebook (surprisingly), Toyota and Verizon, among others. An Apple lobbyist in 2017 told a Nebraska Senator that the state would suddenly become a hotspot for bad actors, it if had passed a Right to Repair law.

Some of the main points for opposition to Right to Repair legislation comes from security risks in giving criminals access to technical information, safety risks from unauthorized repair, and risks to intellectual property.

Some of these issues are valid, like the last two. If your laptop got an unauthorized repair and it was not done correctly, that could cause some issues. And since many of these have batteries inside, that could become a hot issue. And the theft of IP or Intellectual Property is a big deal. That’s not something that any company wants to have happen to them. Especially after spending millions and in some cases billions, on R&D for that product.

It’s mostly companies that are against the Right to Repair. And one reason that was not mentioned, is sales. If you’re able to repair your device for a lower cost at another repair shop, you’re less likely to buy a new phone. Which is where companies make the majority of their money.

Colorado has enacted the first ‘Right to Repair’ law, others following suite

Colorado enacted the first Right to Repair law in early June 2022. Governor Jared Polis signed into legislation, a law that would allow wheelchair owners to get access to parts, software and manuals so they can repair their own wheelchairs. This legislation is only for wheelchairs, but it is a step in the right direction.

New York is also about to ratify a Right to Repair bill that would include electronics, making it the first in the country for electronics. The Digital Fair Repair Act, is ready to be signed into law, and it’ll pave the way for citizens in New York State as well as across the country, to repair their own devices.

This law does have a few exceptions, though it does cover almost all electronics. The exceptions include medical devices (which another law covers), home appliances, auto parts, and industrial hardware including tractors and all-terrain vehicles.

This is only the beginning and we expect to hear more States starting to adopt their own Right to Repair laws. President Joe Biden is also planning to do an executive order regarding Right to Repair. Though we have very few details on that right now.

Apple has already launched its own repair program and Samsung is gearing up to launch theirs this summer. It’s been a rocky road so far for Apple however. In November 2021, Apple announced its Self Service Repair program, and it launched in April of 2022.

Apple launched its self service repair program in late April of 2022. It was a little odd, as the website that hosts the program looks very outdated, compared to something Apple would launch. But it is legit, and they will sell you parts as well as allow you to borrow the tools needed to do the repairs.

YouTuber iUpdate attempted to repair the screen on his iPhone 12, and you can see the full video below.

Basically, Apple lets you borrow the tools for $49. Which seems reasonable, though the tools are pretty insane. Apple does also place a hold on your credit card for the tools, so that if they don’t get sent back, they charge you the price of them. Some say it’s a $1200 hold. By the end of the video iUpdate comes to the conclusion that it was actually more expensive to do it himself than to take it to the Apple Genius Bar. And I’m sure that was done by design.

Samsung is launching its own Self-Repair service later this summer, and fingers are crossed that it’s a bit easier than what Apple has done. Samsung says that the program will be available for the Galaxy S0, S21 and Galaxy Tab S7+ family of devices first. Surprisingly, not the new Galaxy S22 models that were announced earlier this year.

Samsung is working with iFixit for this program. As mentioned already, iFixit already has a bunch of teardown and repair guides for Samsung phones, so this is smart. Not to mention, it sells a lot of toolkits too.

Should you care about Right to Repair?

Yes, you should care.

Obviously, not all of us are going to go ahead and repair our own devices by ourself. This is a bit more than you repairing your own device. It’s more of allowing third-party repair shops to get access to authentic parts, and repair guides that will allow the repair shop to do the job correctly.

Instead of having to go to Google, Samsung, or OnePlus to fix your phone, you can just head to a local repair shop and get it done. Or even do it yourself. Right to repair is actually a very big deal.