The ECOVACS DEEBOT X1 OMNI does everything right.

ECOVACS sent AndroidHeadlines the DEEBOT X1 OMNI robot vacuum to check out and review. We used it for a little over two weeks before writing this review.

ECOVACS is one of the smaller robot vacuum players on the market. Because they did not start out making regular vacuums like Shark, nor did they become super popular super quick like iRobot. But ECOVACS is one company you should be paying attention too, especially with the new DEEBOT X1 OMNI. It can do basically everything that you want it to.

The DEEBOT N8 Pro+ that was released last year was already pretty good, but ECOVACS took that up a notch this year. Adding two mops to the bottom of the X1 OMNI, as well as a new and improved docking system. This new dock is able to refill the water reservoir in the actual vacuum. As well as clean the mops while it is docked. And of course, it can empty the dustbin. So you won’t really need to lift a hand to clean any longer.

All that is good, but how does it work in the real world? Does it work as expected? Well let’s talk about that in our review of the ECOVACS DEEBOT X1 OMNI robot vacuum.

Throughout this review, I’ll be making quite a few references to the Roborock S7 MaxV Ultra, and that’s because it was announced at CES as well and has a lot of the same features. The DEEBOT X1 OMNI however, mops better than the latest from Roborock. That’s due to the dual spinning mops on the bottom of the X1 OMNI, which I was pretty impressed with.

Here in the midwest, we’re just now starting to get into Spring, but there’s still some snow on the ground. Which means that snow, salt and other things are being tracked in. In my experience, that’s been one of the hardest messes to clean up. But the DEEBOT X1 OMNI was able to do it with ease. In the app, you can direct it to clean an area twice if needed, but that wasn’t even needed. 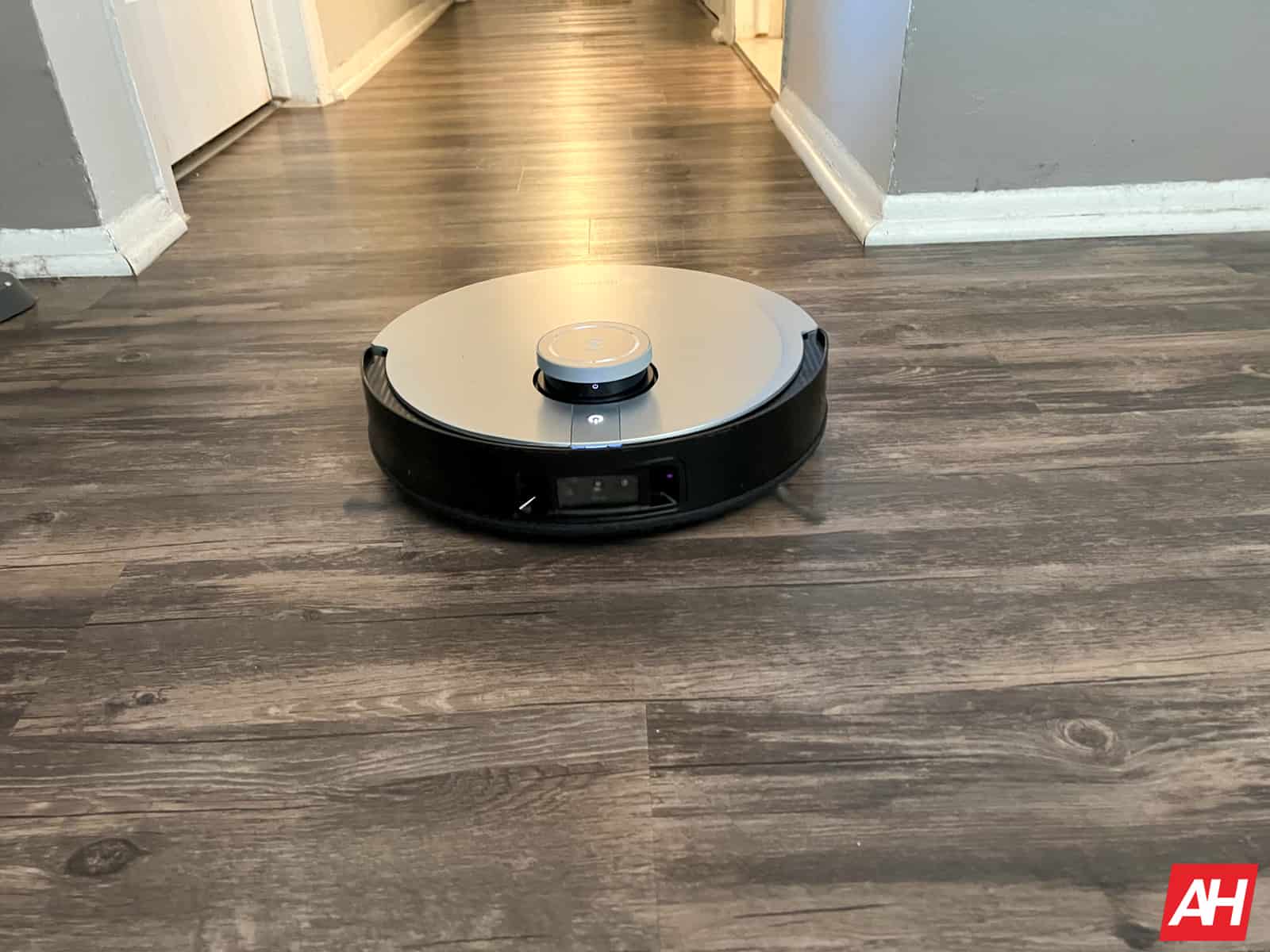 The dual spinning mops here are able to do 180 RPM, so it can scrub just about anything off of the floor. And in my experience, it has done just that.

Now there is a downside to this mopping feature – actually two downsides. Firstly, due to this new mop it uses a lot more water. When I first unboxed the DEEBOT X1 OMNI and saw how large the water tanks were in the dock, I figured this would last months. No. It lasted about a week before I needed to refill it. That was on the highest level, so if you use the lower level for water, it’ll last a bit longer. But it’s incredible how much water it can use. Even cleaning the mops uses a lot of water. Which, make sure you empty that often, as it can stink pretty quickly.

The other downside is, you’ll need to remove the mops to clean your entire home. If you’re like me and have some rooms that are carpeted, then the DEEBOT X1 OMNI is not going to clean your entire home without you removing the mops. Now this is to make sure that it doesn’t get your carpet wet, which makes sense. But I’ve been used to the Roborock S7 MaxV Ultra which can lift up the mop on carpet so that doesn’t happen. That’s a feature that ECOVACS really needs to add to its robot vacuums. It’s going to make it a lot easier to clean your whole house without lifting a finger.

Overall, the mopping functionality is top notch. I was quite surprised by how good it actually was here.

Ultimate Suction does live up to the hype

This year, with the DEEBOT X1 OMNI, ECOVACS upped the suction power all the way to 5,200Pa. That’s about double its previous robot vacuums’ suction power. So what does that actually mean? Well, for one, it can pick up a ton more dirt, dust and other debris that are on your floors. Secondly, it makes it easier to empty into the dustbin.

Just how powerful is it? Well I run the vacuum every single day. I do have a dog and she is currently shedding her winter coat and growing her summer coat, so there’s a lot of dog hair around. My apartment doesn’t look very dirty, but after running the DEEBOT X1 OMNI, its clear that there was a lot more dirt on the floor than I thought. The dustbin is still normally full after each run. Which goes to show you how much it is picking up with this enhanced suction. 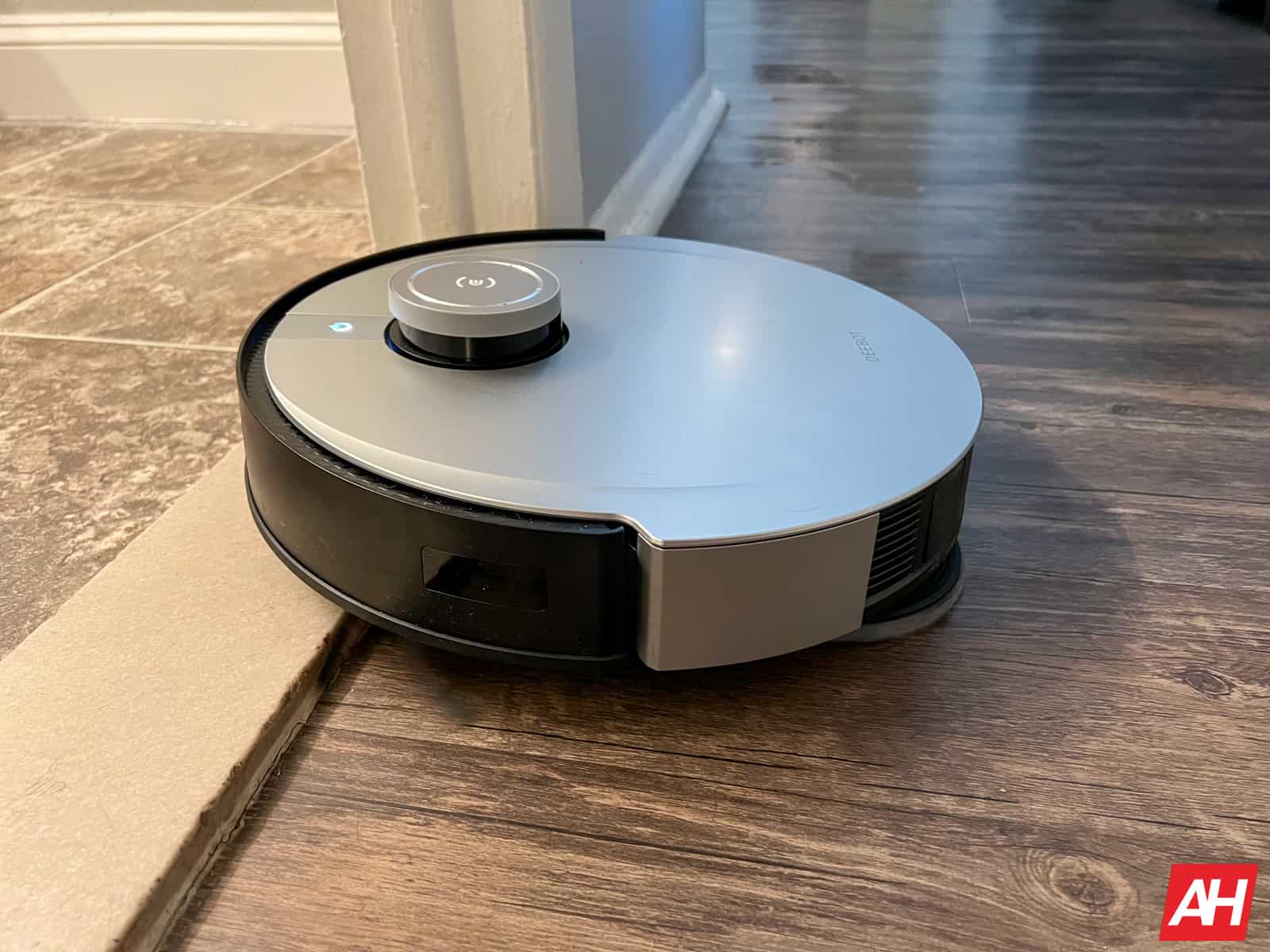 Unlike its competitors, ECOVACS has not ditched the bristle brush for a rubber brush. Which, I think allows it to pick up more dirt and dust. But that could be a placebo affect. However, this means that the vacuum is going to get tangled up a whole lot more than with a rubber brush.

The vacuuming part of this vacuum is exactly what you’d expect. It’s not really surprising, and we mean that in a good way. After testing numerous robot vacuums, we think this is one of the better performers out there.

Another feature that we’re seeing on robot vacuums these days, and it’s probably my favorite feature, is obstacle avoidance. Adding in cameras and using machine learning to map out your home and avoid different obstacles like shoes, clothes, pet waste, cords and so much more. I reviewed the ECOVACS OZMO T8 AIVI a couple of years ago, and it was pretty impressive with how well it could avoid obstacles. Now, fast-forward two years and it does an even better job, and now can map out your home in a 3D floor plan. Of course, that’s why it’s “AIVI 3D”.

It uses a camera, along with an enhanced laser to map out your house, so it knows where to go, and what to avoid. Even when it runs over something like a cord, the DEEBOT X1 OMNI will go ahead and stop the vacuuming, and roll off of it. This is actually a really good feature to have. As it will correct itself, without needing you to come rescue the robot, because it has gotten tangled.

With that camera on the front of the DEEBOT X1 OMNI, you can also use it to see what the vacuum sees. Honestly, I don’t know when I’d actually use this, other than to see what my dog is up to when I’m not home. But she’s probably sleeping somewhere far away from the vacuum, anyways. However, it is a feature that is available should you need it.

The Omni Dock is huge, but impressive

The dock for the DEEBOT X1 OMNI is very large. In fact, some people that have come over since I’ve had it, thought it was a trash can. It does look very similar to one, and the top even opens like a trash can would. But it does need to be big, to handle the two huge water tanks. On the left side is the dirty water, and the right has the clean water that is used to clean the mops and refill the water reservoir in the vacuum.

Below that, there is a little drawer for the dustbin to empty into. Honestly, I wish this was a little bit bigger. I haven’t had the DEEBOT X1 OMNI long enough to tell how long each bag will last, for holding dust and dirt, but I don’t think it’ll take eight weeks as most robot vacuums with an auto-empty dock. There are also buttons on the top of the dock for cleaning the mops, pausing the cleaning and return to the dock. I never really used these buttons, as I mostly relied on the app, but it is nice to have that available, if your phone is not nearby. Inside the top of the dock, there is a little compartment between the two water tanks. That holds two additional mop that you can replace the older ones with when the time comes. It’s a pretty neat thing to have inside. Speaking of the mops. Not only does the DEEBOT X1 OMNI clean them, it will also dry them for you. You can choose how much heat to use to dry them with as well. This is important as those mops can get pretty stinky after a while too.

The ECOVACS app is pretty good 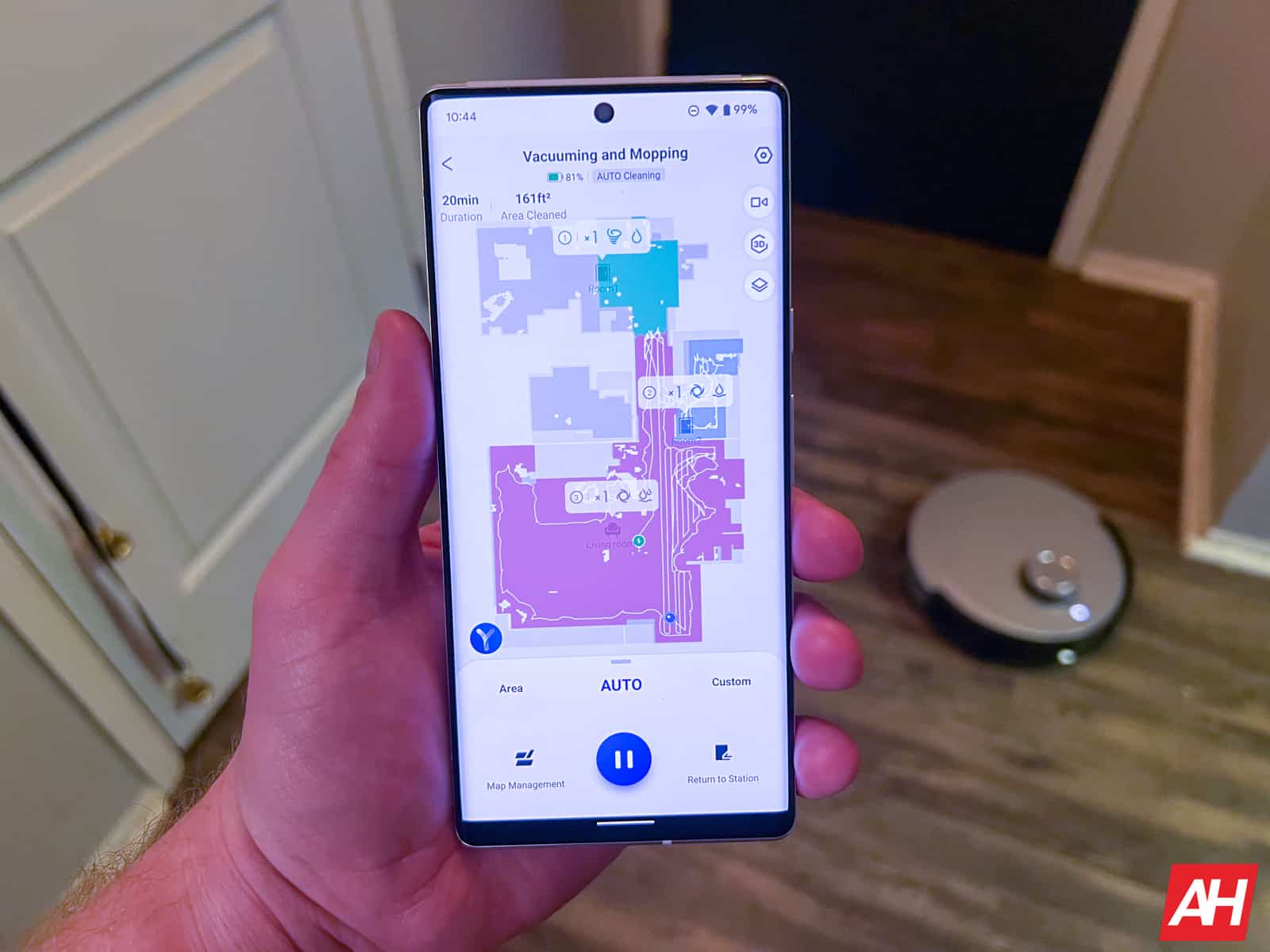 After you enter your vacuum, you can see the floor plan. You can choose to just have it automatically clean your home, or customize how it cleans each room. For instance, in the bedrooms, I have it set to use max suction, as those are carpeted rooms. While the rest of the apartment is vinyl so it is set to vacuum “standard” and then the water flow level is set to “high”. You also have the ability to set it to clean each room once or twice.

As mentioned before, you can also get a 3D floorplan of your home with the app now, thanks to AIVI 3D. Which is cool, but honestly, I never used it til I needed a screenshot for this review. It’s just not necessary. But it is kinda cool to see how it mapped out your home and identified different furniture in your home.

There’s one more part of the app we need to talk about, that’s Yiko. It’s the new assistant that ECOVACS has included in the DEEBOT X1 OMNI. At first, I thought it was dumb, I won’t sugar coat that. But after time, I found it to be pretty useful. You can walk by the dock, and tell your vacuum to start cleaning. No need to have your phone in your hand, or talk to Google Assistant/Amazon Alexa. It’s a bit more convenient, but I used it once. So your mileage may vary.

ECOVACS Deebot X1 Plus vs X1 Turbo vs X1 Omni

This year, ECOVACS is selling three different models of the X1 robot vacuum. It ranges from $1,149 to $1,549. The model we have here is the fully decked out model that is $1,549. It’s quite pricey, but for some, you’ll be able to most of the same features for less. Below is a table showing you what is included with each model.

Obviously, the X1 Omni is the whole package from ECOVACS, but that $1,549 price tag is a bit much for some people.

Should I buy the ECOVACS DEEBOT X1 OMNI? 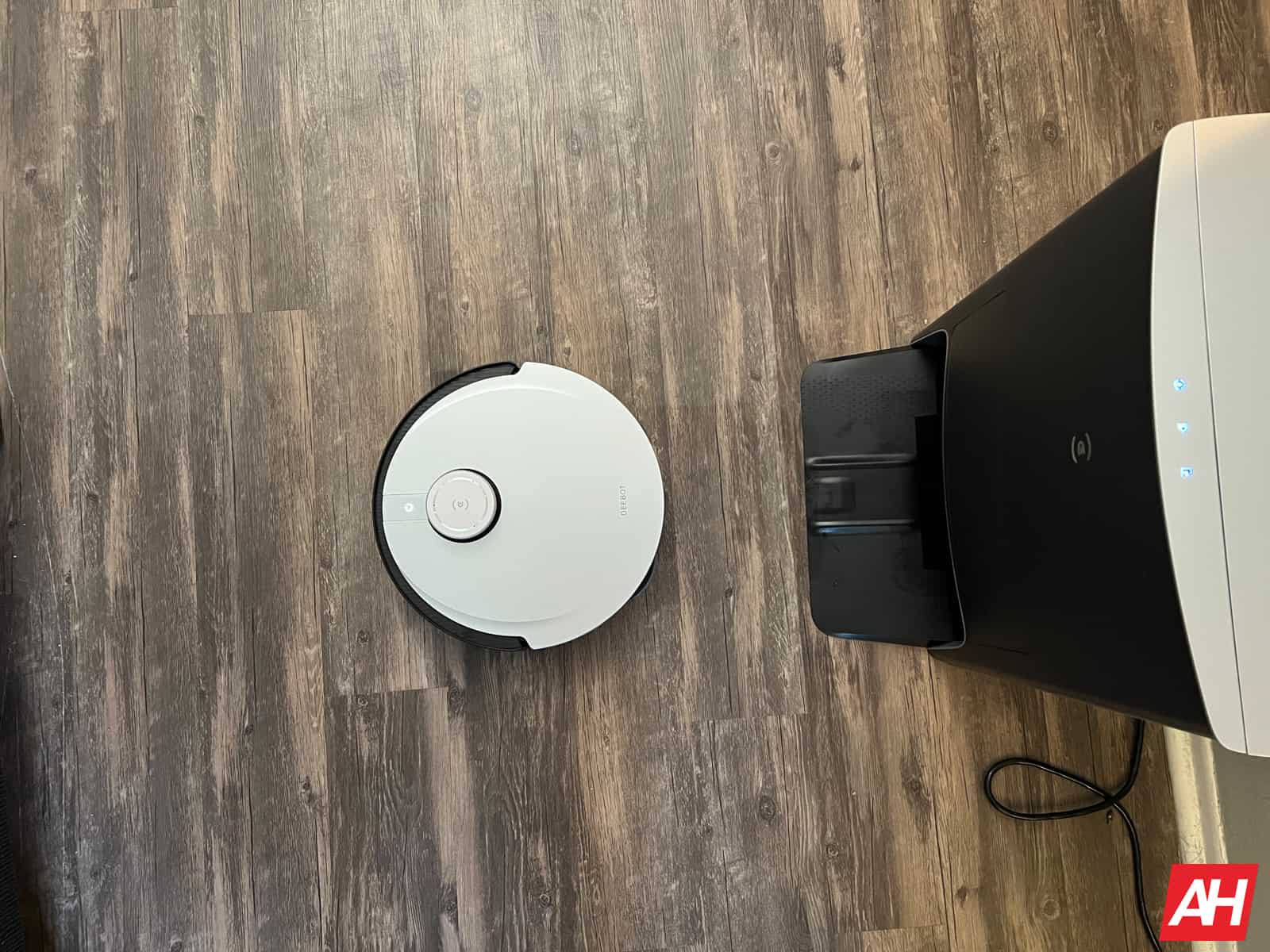 As much as I love the ECOVACS DEEBOT X1 Omni, it’s tough to recommend it, purely based on the price. This is a $1,549 robot vacuum. The most expensive robot vacuum that we’ve seen. The iRobot Roomba s9+ was only $1,100 when it launched. So for most people, this is going to be a hard sell. But if you have the money and value your time, then the DEEBOT X1 OMNI is going to be a must-buy for you.

If you don’t quite want to spend that much, I’d recommend the X1 Plus. Both the OZMO Pro and OZMO Turbo mops are really good. Plus I’d rather have the auto-empty station over the auto-cleaning station. As I don’t mop as often, as I do vacuum.