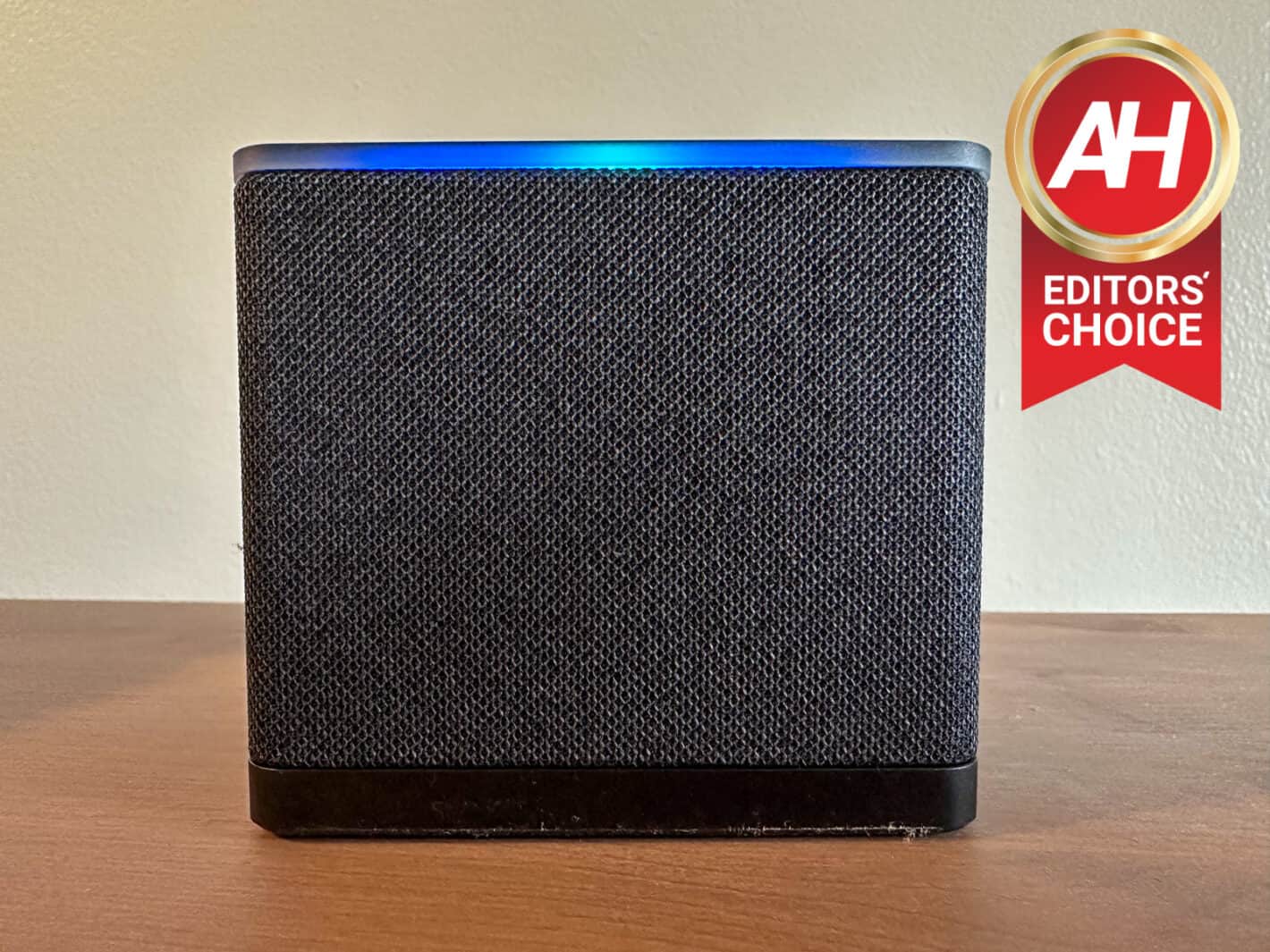 The Amazon Fire TV Cube does it all, and for less than its competitors.

We are writing this review after six weeks of usage of the Fire TV Cube (2022), which Amazon sent over for us to review. Amazon did not see this review before it was published.

Before Amazon announced the Fire TV Cube (2022) at its Devices and Services event in September, I really thought that the Fire TV Cube was dead. It had been over three years since the previous model was announced. And since then, Amazon had introduced a handful of new Fire TV Sticks, including the Fire TV Stick 4K Max, which I thought would replace it. But I was wrong.

The new Fire TV Cube is a great streaming device, and doesn’t really compete with many Roku devices, nor Google TV devices. But it does compete with the NVIDIA SHIELD TV and the Apple TV, which are similar in price. So how well does it compare with those two streamers? Let’s find out in our full review.

Like most of Amazon’s Fire TV products, setting up the Fire TV Cube is actually super easy. You’ll be asked to login to your Amazon account, of course. And then you’ll be walked through the setup process of activating Alexa, downloading apps and so forth. The setup process can take a bit of time, especially if the Fire TV Cube has gotten a few updates since it was manufactured. But the user input is pretty simple.

In the setup process, it’ll also ask you to setup your TV and/or soundbar to be controlled with your Alexa Voice Remote (included with the Fire TV Cube). This shouldn’t require a lot of work, at least it didn’t in my experience. And I used it with a couple of different UST Projectors and TVs.

It’s good to see that the setup process is still pretty simple, simple enough that even your parents or grandparents can do it.

As I mentioned in the top part of this review, the design of the Fire TV Cube is much better this year. Even though it mostly looks the same. So what’s new here? Well, the biggest thing is that it is now wrapped in fabric. Taking that design choice from its Echo smart speakers. Why is that such a big deal? Dust. Scratches. And really anything else that can happen to it. Previously, it was made out of a glossy plastic, which could get pretty ugly pretty fast. Now a lot of us will likely put it in our entertainment system and really never see it again. However, with always-on Alexa, you’re going to want to be able to see it, to know that Alexa is listening. 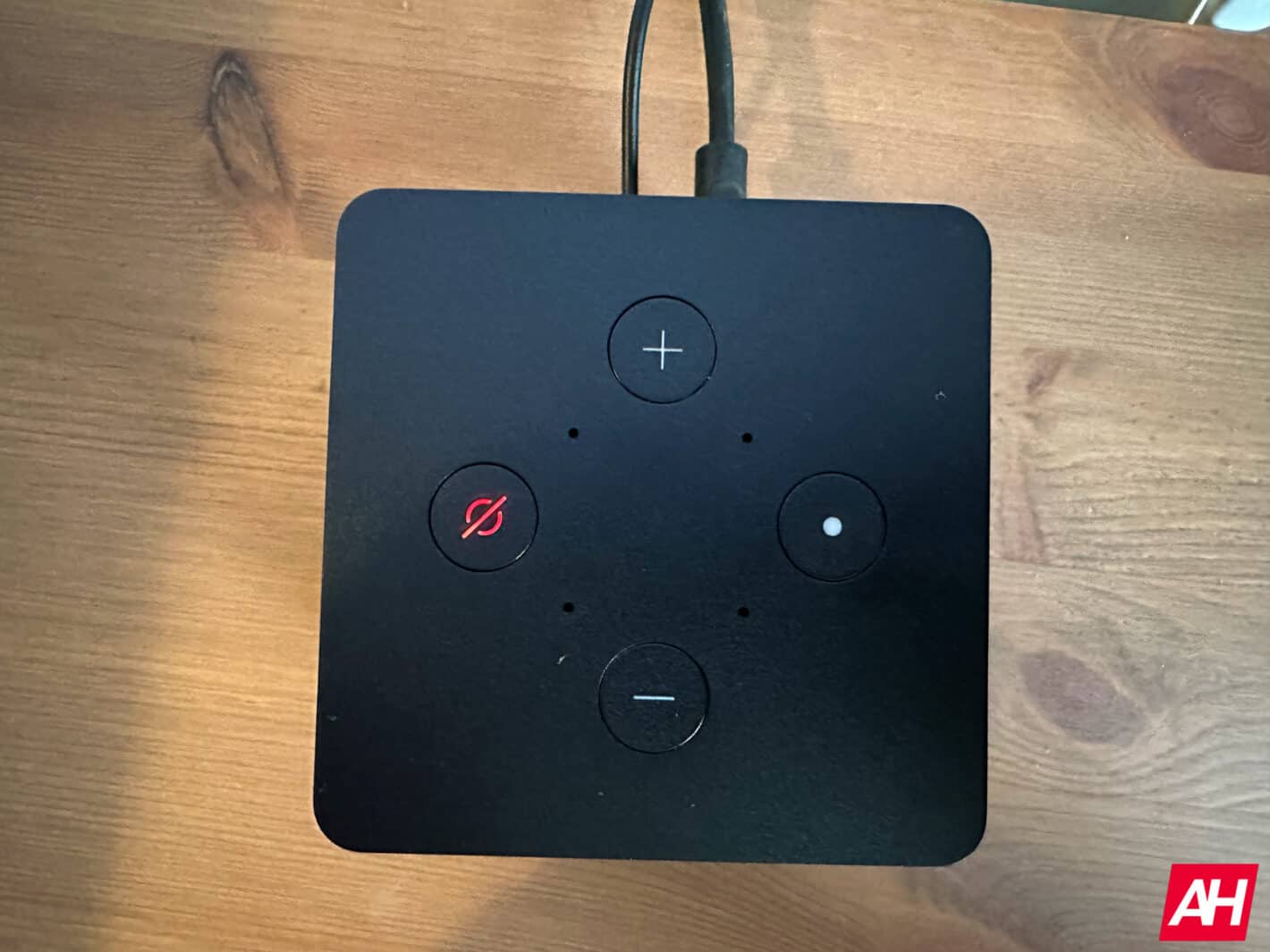 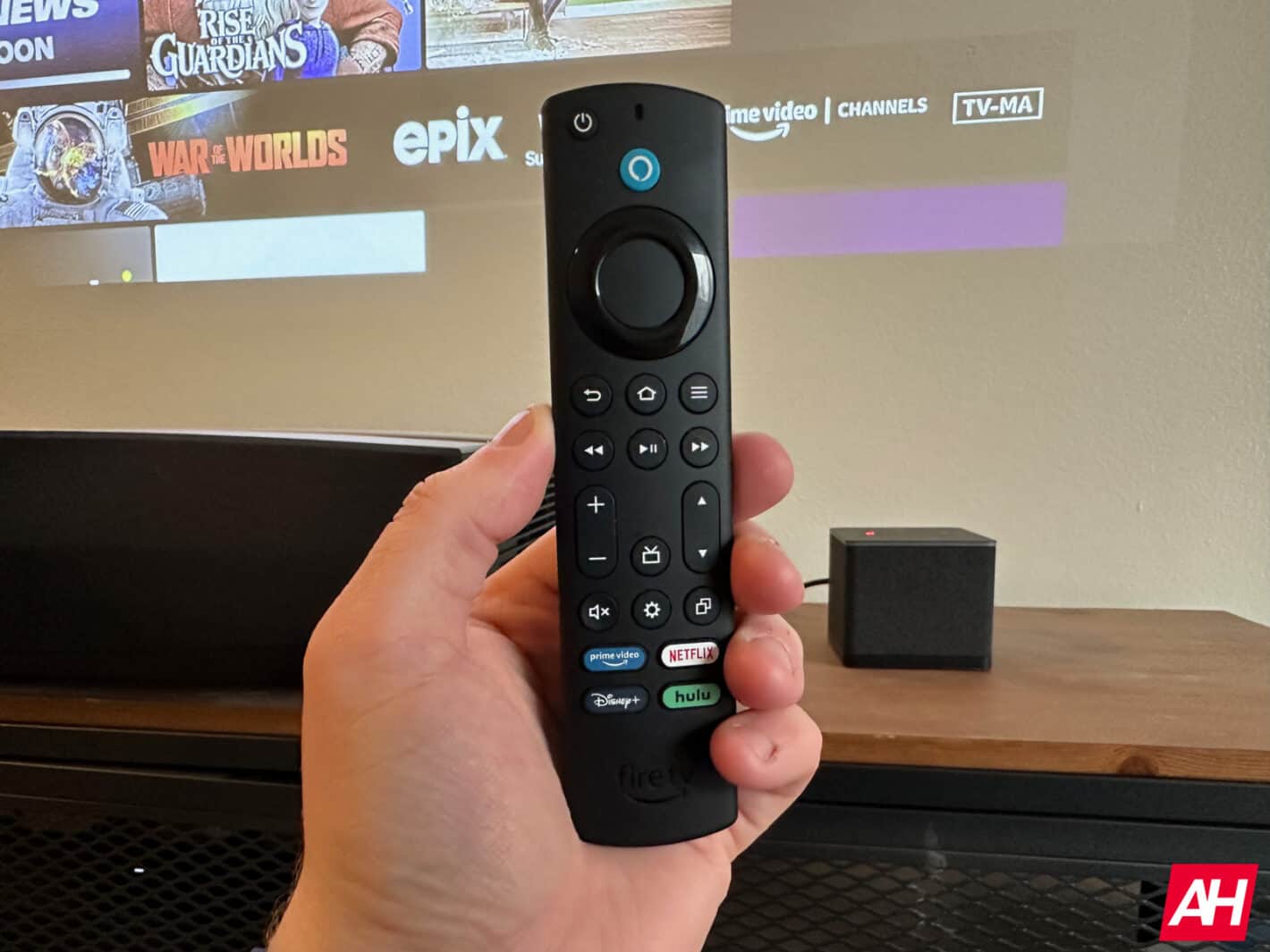 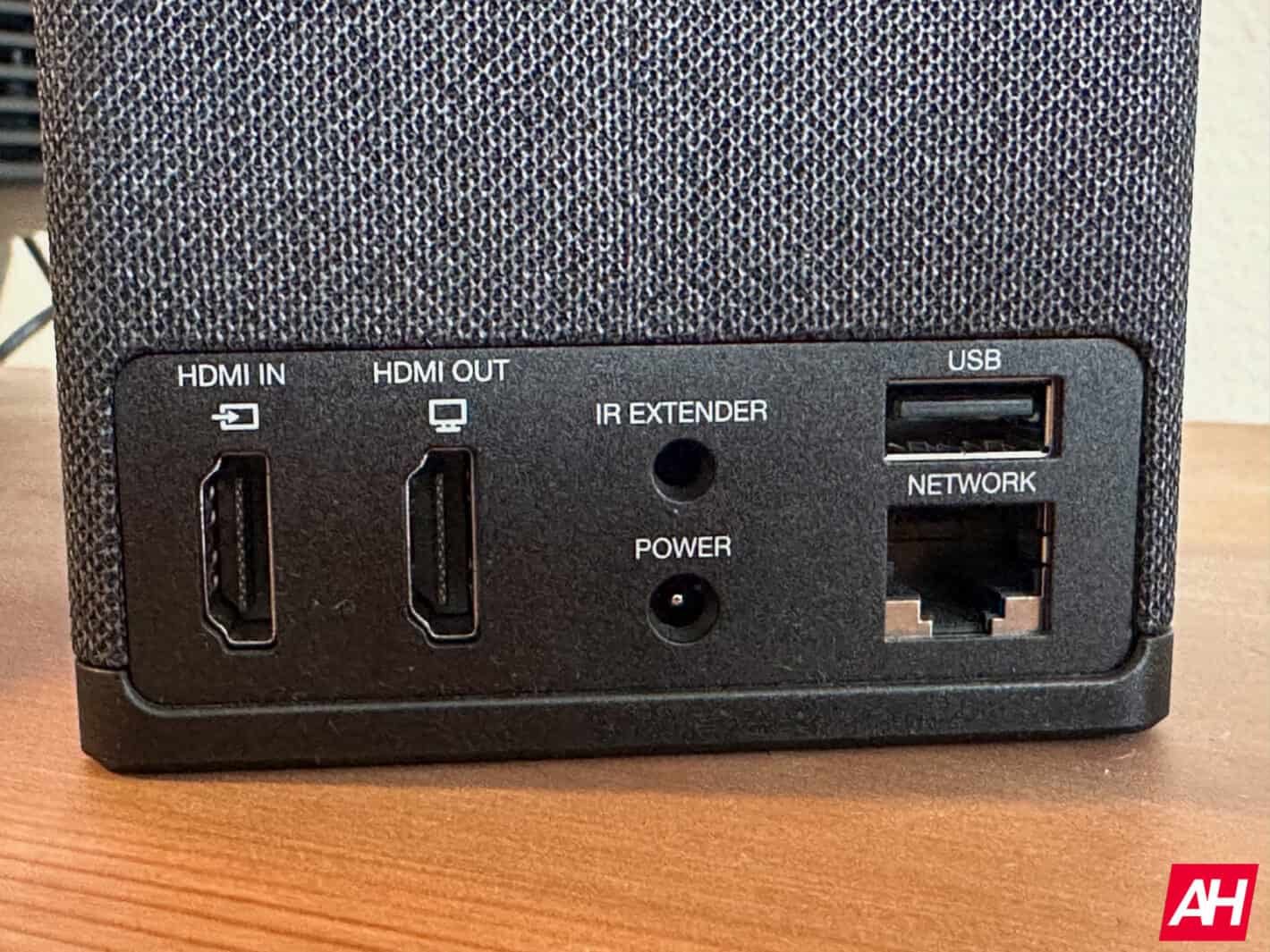 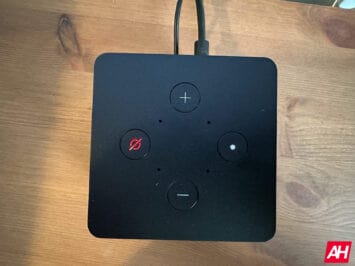 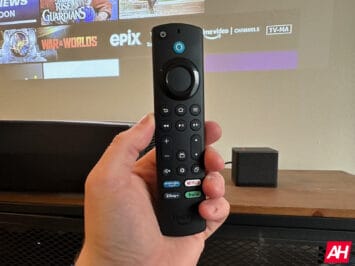 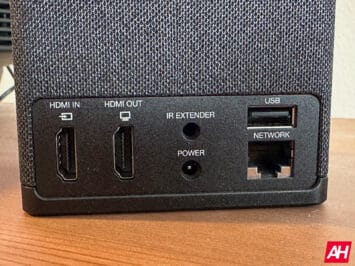 The design is still pretty simple. On the top, there are four buttons for turning the mic on and off, as well as adjusting the volume. To be honest, I never used any of these buttons. The Fire TV Cube has been really good at not giving false positives for “Alexa”. Even with it sitting right next to the TV, and commercials saying the wake word. And since I have it plugged into a projector and a Sonos Beam plugged into that, the volume buttons aren’t very useful for me. But good to see them there.

Now on the back, that’s where you’ll find your ports. There’s power of course, with an IR extender above it. To the right is a USB-A port, and an Ethernet port. And on the left are two HDMI ports. There’s a HDMI In and an HDMI Out. Why is there an HDMI in and out port you ask? Well, for cable boxes. If you haven’t cut the cord yet, you can plug your cable box into this, and tell Alexa to turn to a specific channel on your Xfinity cable box. Which is really neat.

It also includes the latest Alexa Voice Remote (not the Pro model, unfortunately). Which has buttons for basically everything. There’s a power button at the very top, along with an Alexa button in blue below it. With a D-Pad, buttons for back, home, menu, as well as play/pause, fast-forward and rewind. There’s also volume and channel buttons, as well as Settings here. And finally at the bottom, there are buttons for Prime Video, Netflix, Disney+ and Hulu. Some of the most popular streaming services on the market.

The only real complaint I have about the Fire TV Cube’s design is the fact that it still attracts a lot of dust. But that’s natural and will happen with anything, unfortunately.

Amazon’s Fire TV software is pretty lightweight, so it doesn’t need a lot of hardware inside, to make it run smoothly. And that’s the case here. It’s very smooth, and I have yet to have it lag or hiccup at all. Of course, that’s thanks to a quad-core processor inside, with 2GB of RAM and 16GB of storage. The Storage is pretty nice to have, but would definitely like to see more in the Fire TV Cube. That’s still more than most streamers though – except for the Apple TV.

Fire TV is actually really starting to grow on me. I didn’t use to be a big fan of it. But the interface is really nice, and easy to navigate. It’s also easy to find things to watch, whether that’s what is currently airing on YouTube TV, new apps to download, or something that’s available on-demand. Not to mention the fact that nearly every app is available on Fire TV. 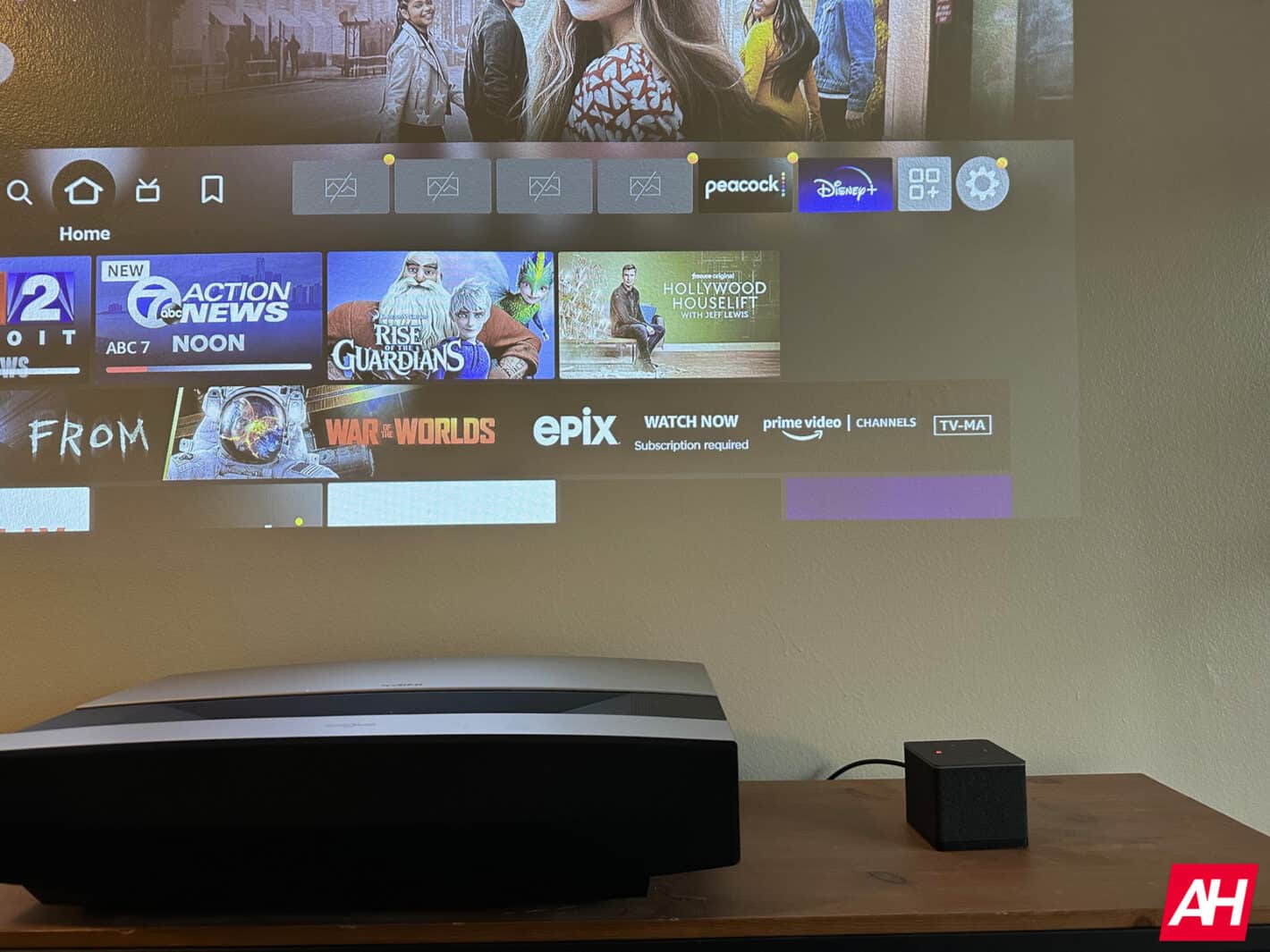 Hands-free Alexa feels like a “pro” version of Alexa and Fire TV. The fact that I can walk by the TV and just say “Alexa, play FOX on YouTube TV” while the TV is off, and have it turn on the TV, open YouTube TV and change the channel to FOX is really impressive. Now going to a specific channel doesn’t work 100% of the time. But it will open the correct app.

Since it is Alexa, you can also ask for the weather, show your camera feeds from your Ring cameras, and a lot more. Now if you don’t like it listening for “Alexa” or whatever wake word you chose, all the time, you can turn off the mic. There’s a button on the Fire TV Cube for that, which will then turn the light to orange all the time. You’ll still be able to use the Alexa button on the remote to talk  to Alexa.

You should. It’s one of the best streaming TV devices I’ve used in a long time. A lot of devices will tend to crap out due to the RAM and storage that it has, but the Fire TV Cube has plenty of both.