Qualcomm announced its latest high-end mobile processor, the Snapdragon 888 on December 1, 2020. This is the chipset that will power most high-end Android smartphones in 2021. Many manufacturers like OPPO, OnePlus, Vivo, LG, Xiaomi and many others have already announced that they will be using the Snapdragon 888 and releasing phones with this chipset in the beginning of 2021.

These days, the newer silicon doesn’t make a huge difference in day-to-day usage, though companies like Qualcomm will throw out all kinds of numbers to show you that it is indeed better than the previous generation silicon. And Qualcomm is actually touting some big numbers, considering the fact that the clock speed on all of the cores in the Snapdragon 888 are the same as the Snapdragon 865 released last year. So how is that possible?

Here, we are going to tell you everything you need to know about the Snapdragon 888 and what you can expect from this chipset and smartphones in 2021.

Most people expected the next premium processor from Qualcomm to be the Snapdragon 875. As the previous models were Snapdragon 865, 855, 845 and the 835. But every few years Qualcomm does like to change up the naming. For instance, a few years ago, after the Snapdragon 821, many were expecting the Snapdragon 830, and instead we got the Snapdragon 835. The reasoning behind that change was basically that a higher number is better, and they got that data from a small internal poll at Qualcomm.

The reasoning behind going with Snapdragon 888 is a bit different though. The number eight is known as a lucky number in both India and China. Two markets that are very important to Qualcomm. And since the Snapdragon 800-series has been its highest-end chipset for more than a decade now, Qualcomm decided to go all in. Calling it the Snapdragon 888. A slightly better reason than changing the naming scheme with the Snapdragon 835 a few years ago.

What’s new in the CPU?

On paper, the clock speeds of the Snapdragon 888 are the same as the 865. Topping out at 2.84GHz. But the cores that are being used are a bit different.

With the Snapdragon 888, the high-performance core is now a Cortex-X1 CPU core. This is a bigger, more powerful and more power-hungry core from ARM. This core is said to provide around a 23% boost over the Cortex-A78, which is ARM’s latest architecture – also used on three other cores on the Snapdragon 888. 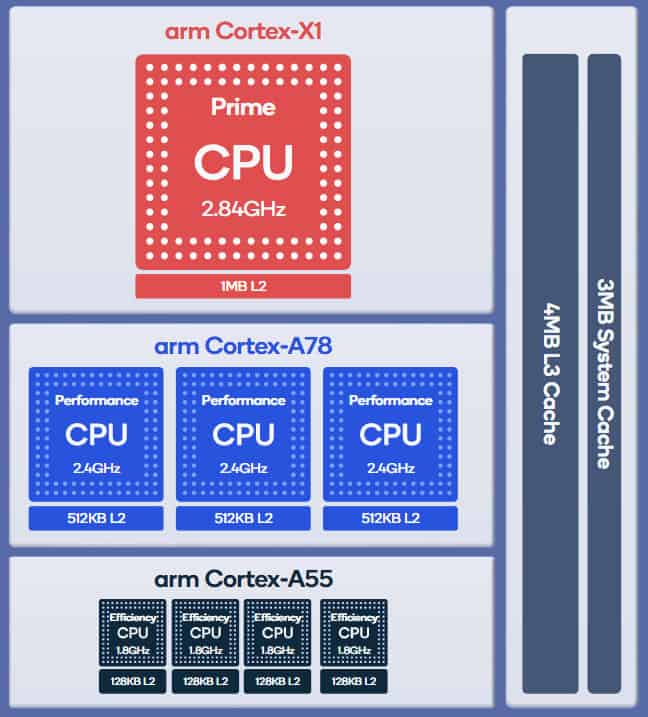 Finally, making up the other four cores of this new chipset, are the Cortex-A55. A tried and true core that Qualcomm (and many other mobile chipset makers) have been using for years. This marks the first time that Qualcomm has used three different cores in its flagship processor.

Essentially, thanks to the addition of the Cortex-X1, we’re getting ever more power out of the Snapdragon 888, when compared to the Snapdragon 865. It’ll mostly be used for gaming, and doing other power-intensive tasks. While your phone will mostly be running on the slower Cortex-A55 cores at 1.8GHz to preserve battery life.

What’s important to note here, is that while the clock speeds are the same as last year’s Snapdragon chipset, with the 888 we should see slightly better performance, with much better battery life. That’s something we can all appreciate, especially with 5G.

Qualcomm has long made its own GPU’s, instead of using an ARM GPU like Samsung does in its Exynos chipsets. And the Adreno GPU has always been pretty impressive.

With the new Adreno 680 GPU, we’re looking at a 35% boost to performance, which is the biggest boost that Qualcomm has provided on its GPU in many years. On top of that big performance boost, Qualcomm is also touting a 25% improvement in battery efficiency.

The Adreno 680 also includes new machine learning instructions, which is going to allow for up to 43% faster AI performance. Including 4-input mixed-precision dot product and wave matrix multiple for 16- and 32-bit floating-point numbers.

Improved 5G support was expected, and the Snapdragon 888 brings the third-generation of Qualcomm’s 5G modem – the Snapdragon X60 5G modem. It is pretty similar to the previous X55 modem, on the spec sheet. But with plenty of improvements. It can handle peak mmWave speeds of up to 7.5Gbps down and 3Gbps up. Now these numbers you will likely never see, unless you are in perfect conditions. But it is nice to see that it can get that fast.

This year, the Snapdragon X60 is an integrated modem. Basically meaning that the X60 is on the Snapdragon 888 instead of being external. What this means is that it takes up less room inside your phone which can be used for battery. It also helps to eliminate overheating concerns.

Much like the Snapdragon 865 last year, every phone with the 888 is going to be a 5G phone. Unless the OEM decides to deactivate the 5G modem, like Sony planned to do in the US on the Xperia 5 II.

So we’re looking at even better 5G performance coming in 2021. That should mean faster speeds and better battery life. As long as the carriers have built out 5G everywhere.

You may not always think of Artificial Intelligence and Machine Learning as parts of a processor, but the processor is what allows them to work throughout your phone. And Qualcomm made some big changes in both aspects.

With the Snapdragon 888, Qualcomm has “fused” the scalar, tensor and vector processing units inside the Hexagon 780 DSP, along with 16X the amount of shared memory. This is going to make it much more efficient. 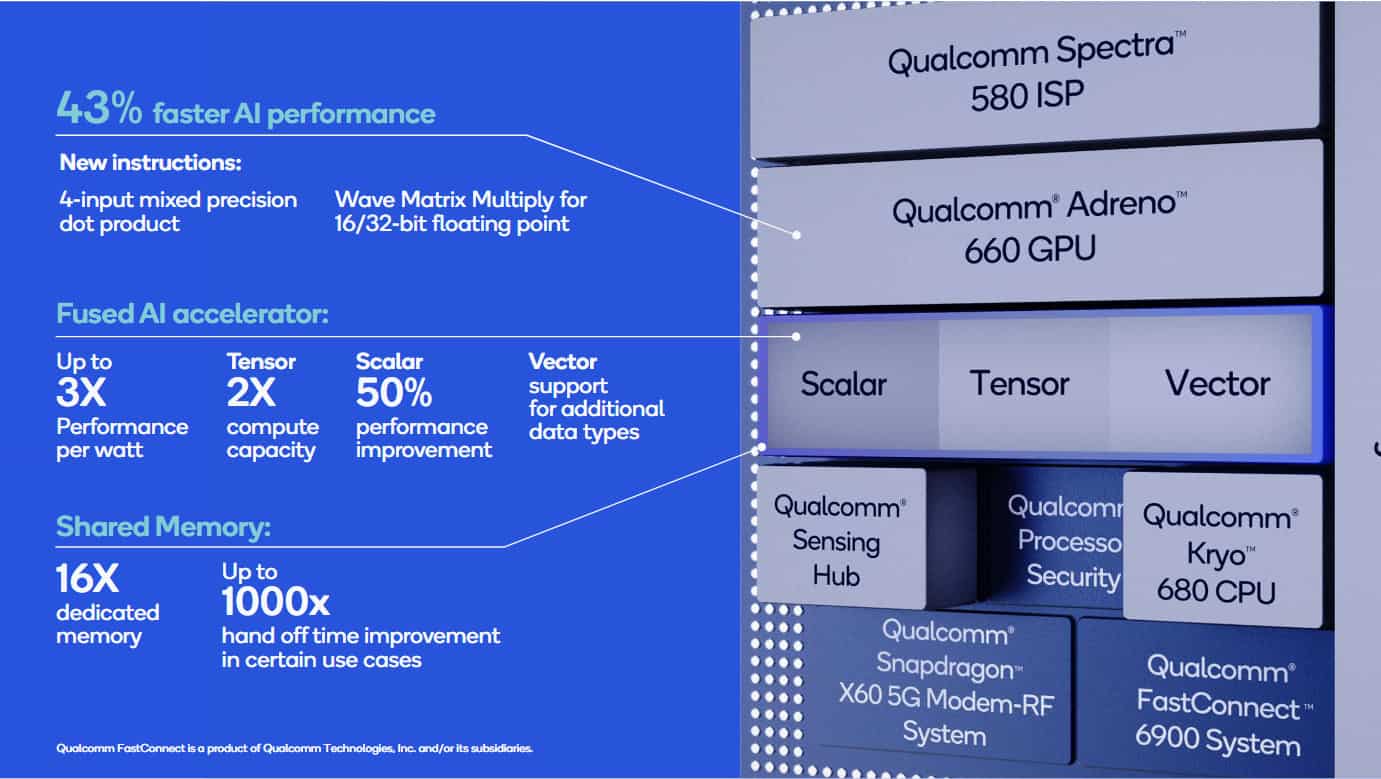 In fact, we’re looking at up to a 1000x improvement to hand-off-time moving workloads between the three processor types. The scalar processor also sees a huge 50% performance improvement. And Tensor has double the compute capacity compared to the previous generation.

With Qualcomm’s decision to combine the CPU, GPU and DSP capabilities, it claims a 3x improvement to AI performance per watt. As well as 26TOPs of overall AI compute. Making it a 73% increase from the Snapdragon 865 released last year.

The new Qualcomm AI Engine Direct is also coming with the Snapdragon 888. This will act as an entry point for Android NN, TensorFlow Lite and Qualcomm SDKs. Helping developers take full advantage of the Snapdragon 888 capabilities. No matter which framework they are using.

Camera improvements on the Snapdragon 888

Included in the Snapdragon 888 is the new Spectra 580 ISP. This Image Signal Processor is what allows your phone to take brilliant photos, even more than the lens and sensor themselves.

The Spectra 580 moves from a dual to a triple processor setup. This is going to allow for three concurrent processing chains at once. And those can be used to capture simultaneous video streams from three cameras or perform real-time processing on three separate image sensors at once. Throughput has also been improved from 2 to 2.7 gigapixels per second. That’s a 35% improvement to processing capabilities.

This is also going to give us faster image shooting and processing. Meaning that we shouldn’t have to wait for the camera to process the image, with the Snapdragon 888. This new ISP is said to be 35% faster when it comes to processing. 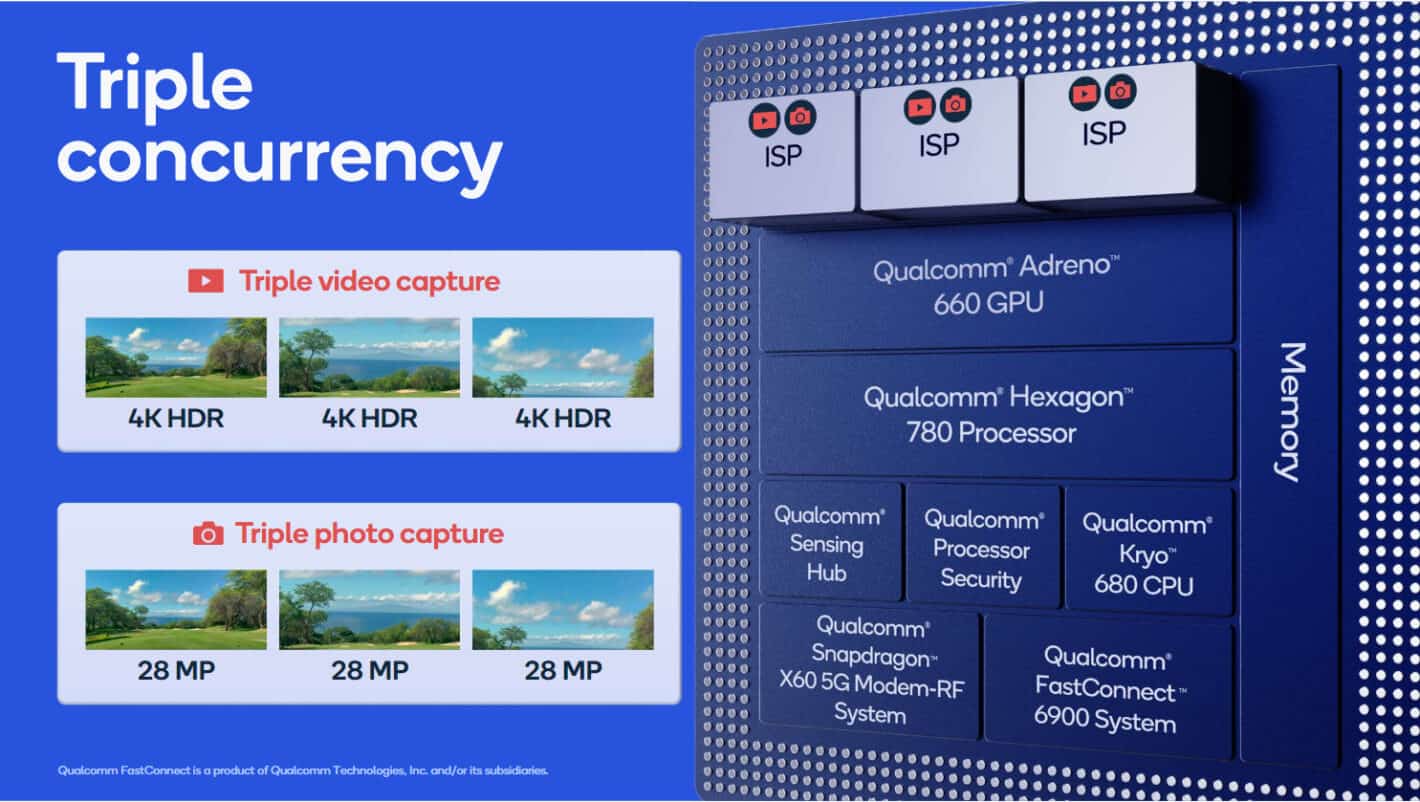 There is also now support for 10-bit HDR image capture when using HEIF. This is going to make the HDR video captured on your smartphone even more impressive, specifically when you are viewing it on a HDR monitor.

Qualcomm has also added a lot of new AI algorithms for auto-focus, auto-exposure and auto-white balance. Making it easier than ever for someone to just point and shoot their photos.

The Spectra 580 is super important for smartphone photography. It’s part of the entire setup for taking better photos on your smartphone. And adding support for new features makes it easier for OEMs to add new features to their cameras, without impacting performance or battery life. So this ISP is a big deal.

There’s a few improvements to Snapdragon Elite Gaming too. For one, it now supports 144Hz displays. However, there are very few games that support 120Hz right now, and likely even less that will support 144Hz. At least for now. It also supports 10-bit HDR gaming at up to 144fps. Which is also now up to 20% more efficient compared to the Adreno 650.

Additionally, it adds the Qualcomm Game Quick Touch. This is a feature designed to lower touch response latency. Which can be up to 20% on 60fps games and up to 10% on 120fps games. The best part about this is that there is no work needed from developers to make this happen. Users will benefit from this as soon as they get a phone with the Snapdragon 888 chipset inside.

The new Adreno 660 GPU si also not going to throttle at all while you’re gaming. As Qualcomm now claims a better sustained peak performance. Which is actually a really big deal. While the Adreno GPUs have always been good at not throttling, when playing very intensive games, it would start to throttle after a while. That won’t be the case with the Adreno 660, thankfully.

Qualcomm is also bringing variable rate shading (VRS) to mobile, with the Snapdragon 888. This is a feature that is now pretty common on PC and the latest gaming consoles, so it’s a big deal to see it on a smartphone in your pocket. This technique is designed to reduce GPU workloads by giving game developers better control over how frames are rendered. For example, if there’s something that is in the background, that frame can be rendered in a lower fidelity, giving the bulk of the GPU resources to rendering foreground objects. Making it more efficient.

When to expect the first smartphones with the Snapdragon 888?

As usual, the first smartphones with the new Snapdragon 888 chipset are set to come out in Q1 2021. We know a couple of them that will be among the first, which include the Xiaomi Mi 11 series.

Though the schedule for 2021 is a bit messed up, largely thanks to COVID-19. Where Mobile World Congress was moved from the end of February to the end of June. Which means that a lot of companies may move their launches up to CES in mid-January. Samsung is one that is doing just that, according to rumors. Though Samsung was not on the list of the 14 OEMs that are set to use the Snapdragon 888 next year.

2021 is shaping up to be an exciting year for smartphones, thanks to the Snapdragon 888.