POCO has announced its new flagship smartphone, the POCO F4 GT. We’ll focus on the phone’s design first, and then move to its specifications and other features.

As you can see in the gallery below, the POCO F4 GT has some rather interesting accents on the back. It’s made out of metal and glass, though it has that lighting icon on the back, along with some other accents that make it easily recognizable.

As you can see, the phone comes in several color options, black, gray, and yellow options. The power/lock button is included on the right-hand side, and doubles as a fingerprint scanner. You’ll also notice its magnetic pop-up triggers there.

The device also includes a centered display camera hole, and a flat display with thin bezels. Now, the POCO F4 GT also comes with LiquidCool Technology 3.0. That tech is supposed to keep the phone cool even during longer gaming sessions. Needless to say, this phone is gaming-focused.

The Snapdragon 8 Gen 1 is included here, as is LiquidCool Technology 3.0

The Snapdragon 8 Gen 1 SoC fuels this handset, and that’s Qualcomm’s most powerful SoC at the moment. POCO also offers LPDDR5 RAM in the package, along with UFS 3.1 flash storage. You can read more about the exact RAM and storage variants at the end of the article.

Now, the phone actually includes the 4,860mm² dual VC cooling system. POCO claims that this LiquidCool Technology 3.0 implementation is capable of handling the heat with ease. 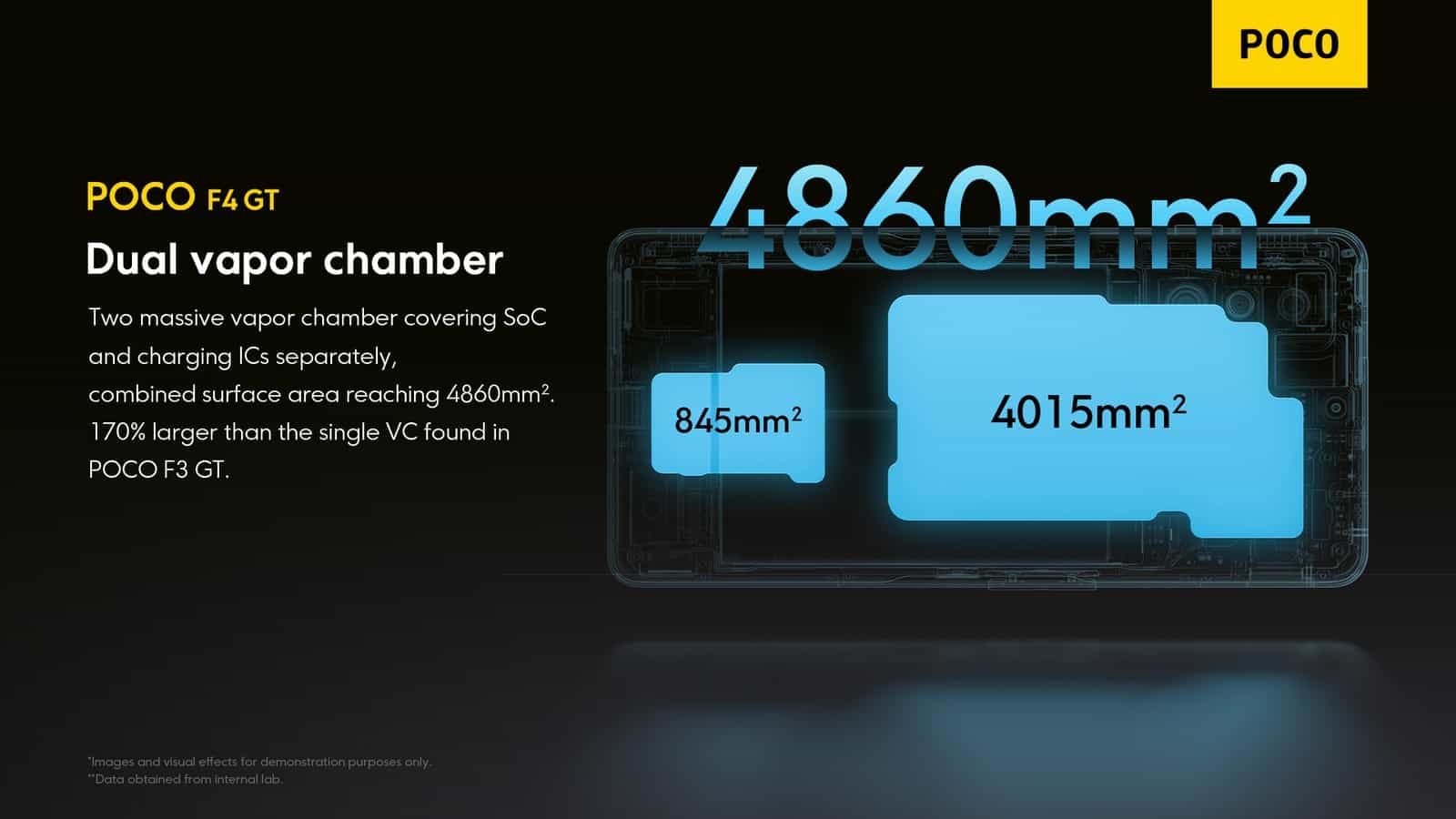 The phone supports 120W fast charging, and comes with ‘CyberEngine’

A 4,700mAh battery is also included in the package, while the device supports 120W fast wired charging. You can fully charge the phone in only 17 minutes. So, the charging is immensely fast. It’s also worth noting that AdaptiveCharge is supported. The device includes quad stereo speakers.

POCO also included ‘CyberEngine’ inside of this handset. That is one of the best linear motors around, and it offers more ranges of vibration. In other words, you should get great haptic feedback here.

A 120Hz AMOLED display has a 480Hz touch sampling rate

In terms of cameras, you have access to a 64-megapixel main camera, an 8-megapixel ultrawide unit, and a 2-megapixel macro camera on the back. A single 20-megapixel unit is included on the front. Android 12 comes pre-installed on the phone, with a custom skin, of course.

The phone is available in two RAM & storage variants, and three color options

The POCO F4 GT colors are officially called Stealth Black, Knight Silver, and Cyber Yellow. The POCO F4 GT comes in an 8GB RAM variant with 128GB of storage, and a 12GB RAM variant with 256GB of storage. The pricing starts at €599 (€499 in an Early Bird offer) for the 8GB RAM + 128GB storage variant. The more expensive model will cost you extra €100. The device will become available on April 28.