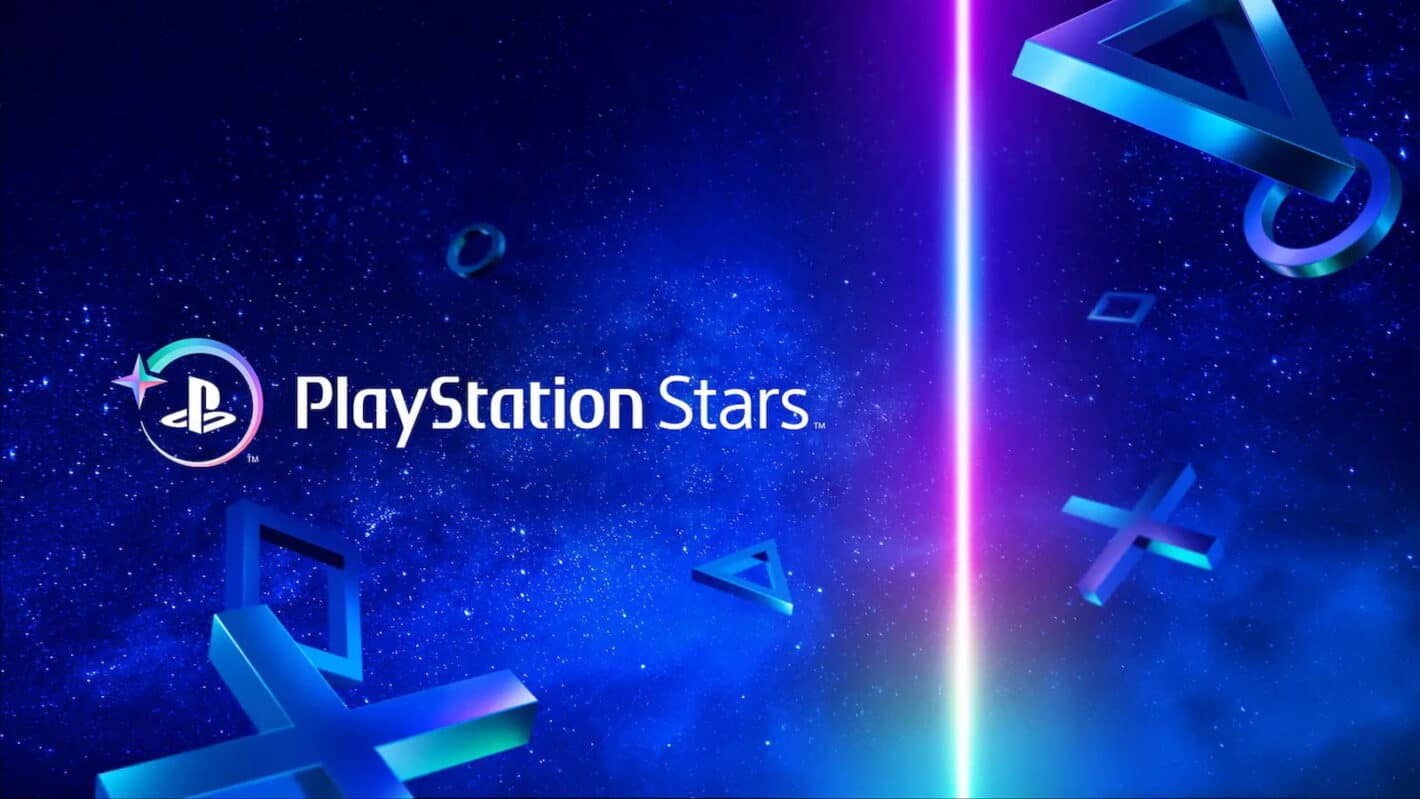 Sony rolled out its PlayStation Stars loyalty program to gamers earlier this month, giving them new ways to earn perks and unique digital collectibles to show off to their friends. By all accounts, PlayStation Stars is meant to be a fun way to incentivize playing games on your PlayStation console. Sony also hopes it’ll convince some players to spend money in its digital store front. As this is currently the only way to earn points.

Though that is likely to change eventually. Overall, the program lets you level up and earn points, which can then be used to redeem all kinds of stuff. If you’re curious about the loyalty program and all its innerworkings, here’s everything you need to know about PlayStation Stars.

What is PlayStation Stars? 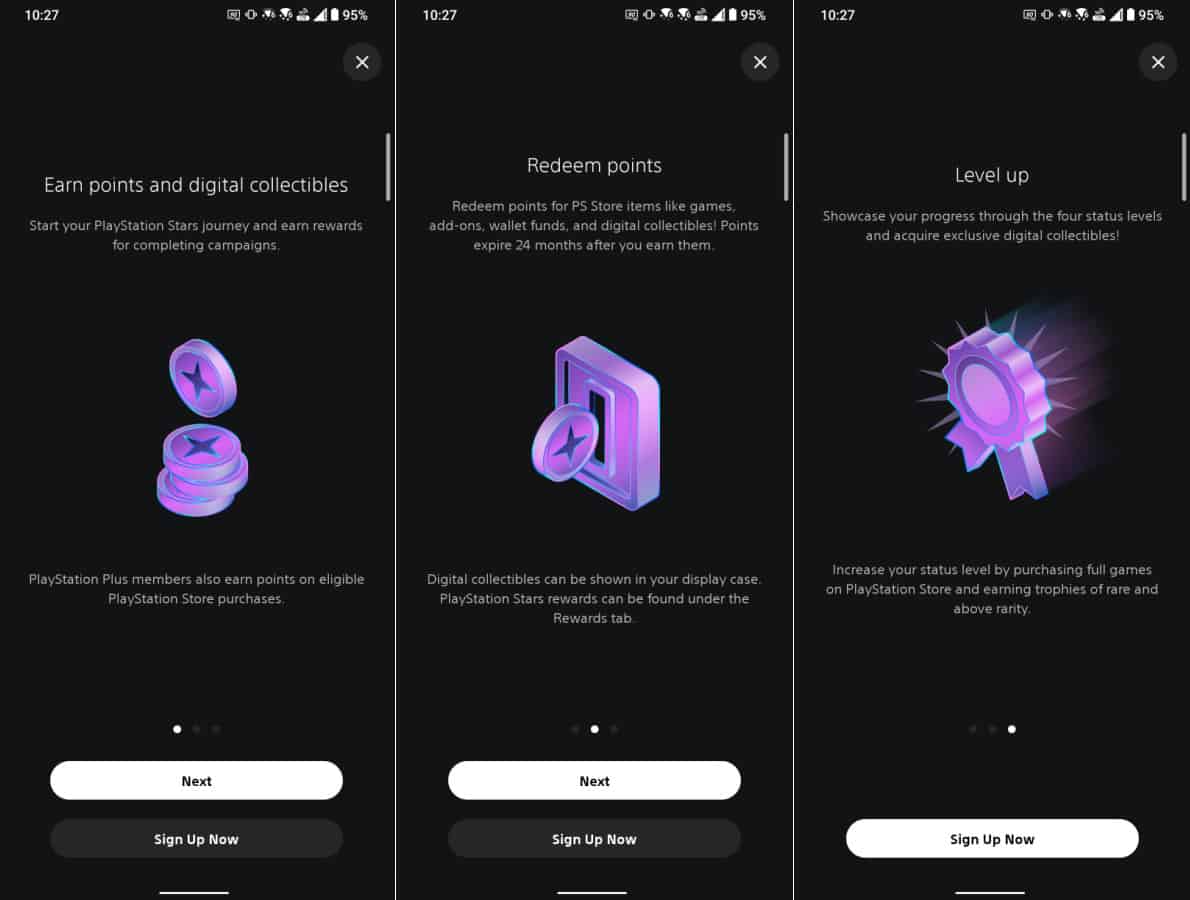 PlayStation Stars is a loyalty program that gives gamers incentives for completing tasks. Sony calls these tasks campaigns, and the requirements for completion can range from playing a specific game to buying something from the PlayStation Store. In turn, you can earn rewards and points. Rack up enough points and you can use those to redeem more rewards.

How does the program work?

The main thing to know is that you earn rewards and points by completing campaigns and various activities. Campaigns can be simple like some of the ones currently available. For example, one that ends in a week simply asks you to “play any game” on your console. Then there are more challenging ones like the ‘Hit Play/1994’ challenge. This one tasks you with launching a game that matches a song that was released circa 1994, and contains a list of objectives corresponding to a matching song.

Then there will be even more challenging campaigns that require you to be the first to gain a platinum trophy for a specific AAA game in your region. Although no such campaign is currently active.

As you complete campaigns, you’ll immediately earn the associated reward. And you may even earn points. Completing more campaigns also helps you level up.

How often are new campaigns added? 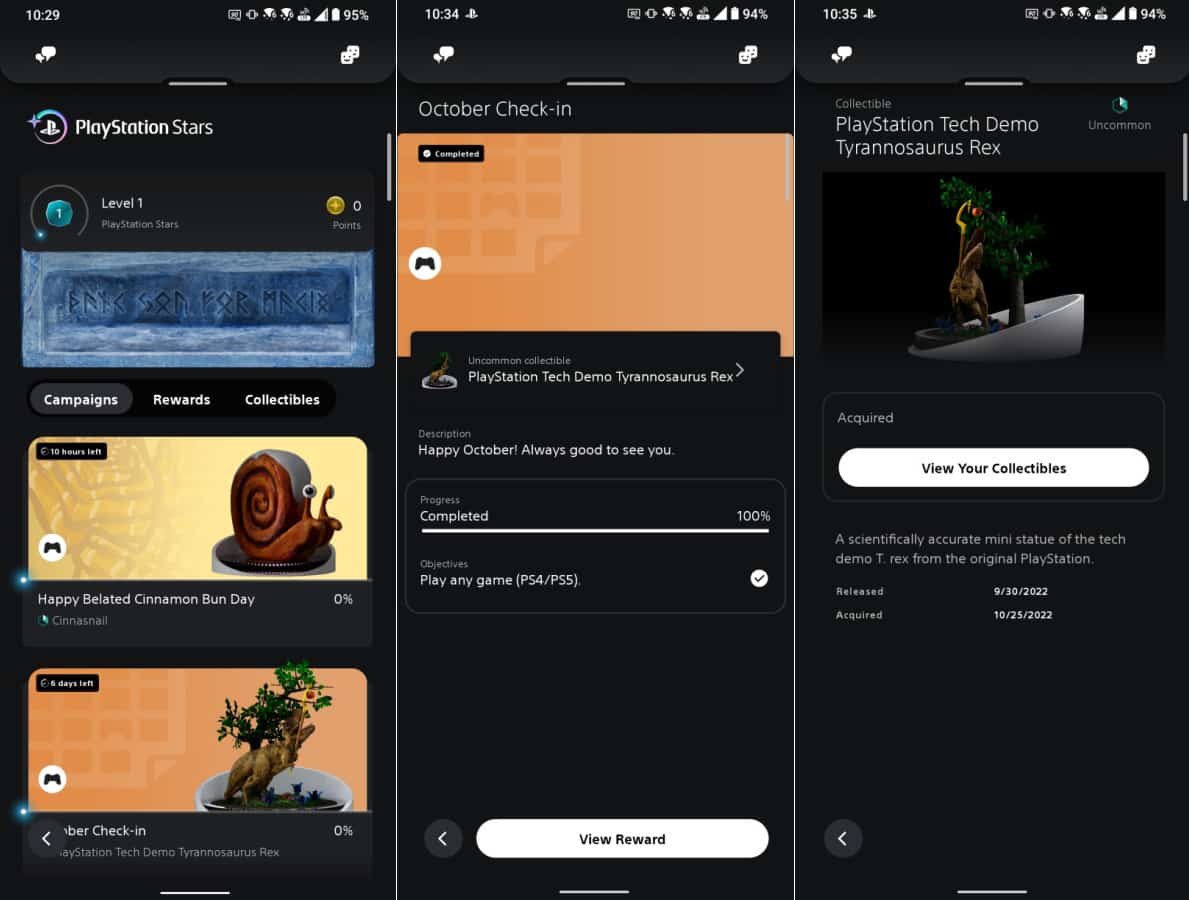 Is a PlayStation Plus membership required?

Sony has confirmed you do not need to be subscribed to PlayStation Plus to join the loyalty program. Even without a PS Plus membership, you can still enjoy the benefits the program offers. That being said, if you are a PS Plus member, you do get points on eligible PS Store purchases.

So there is an incentive there to subscribe to PS Plus. Though, I wouldn’t necessarily suggest signing up for PS Plus just to get points when you make eligible purchases. There are tons of reasons why PS Plus is a good value. But earning PlayStation Stars points shouldn’t be the only reason you sign up.

Who is eligible to join PlayStation Stars? 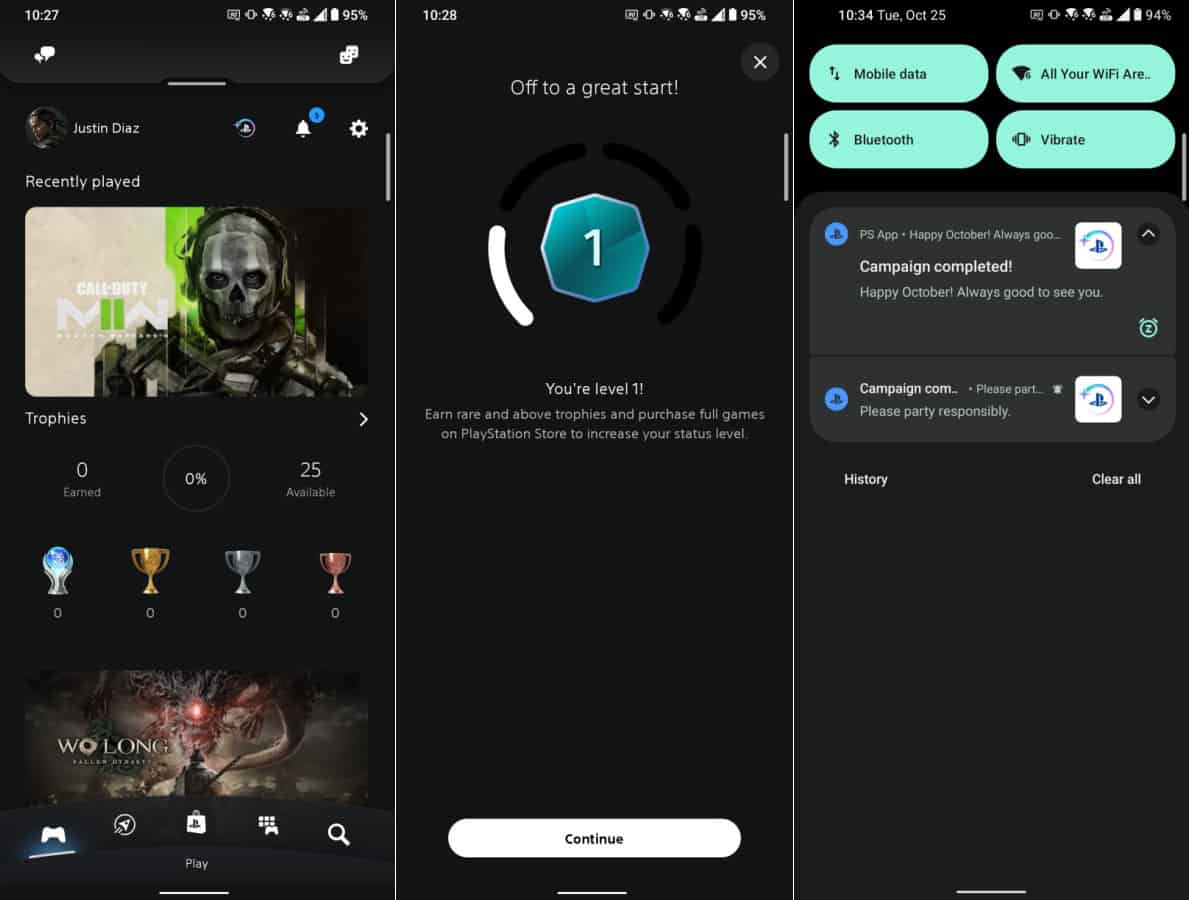 Yes and no. If you have a PS3 and/or PS Vita, you can join PlayStation Stars. However, most parts of the program do not support these consoles. Full game purchases won’t count towards level up status. They will however count towards earned points, but you will still need to be subscribed to PlayStation Plus and you will only be able to make these purchases on your console.

For PS4 and PS5 users, full game purchases can be done from the console, the web, and the mobile app and still count. So, a PS4 or PS5 is recommended to get the full experience of the program.

Where is PlayStation Stars available?

PlayStation Stars is officially available in multiple regions and is now live in all of them as of October 13. Regions where players can join the program are Asia – including Japan, North America, South America, Europe, Australia, and New Zealand. Obviously some of those regions include quite a few countries. So to be certain, check in your local region if you can join. 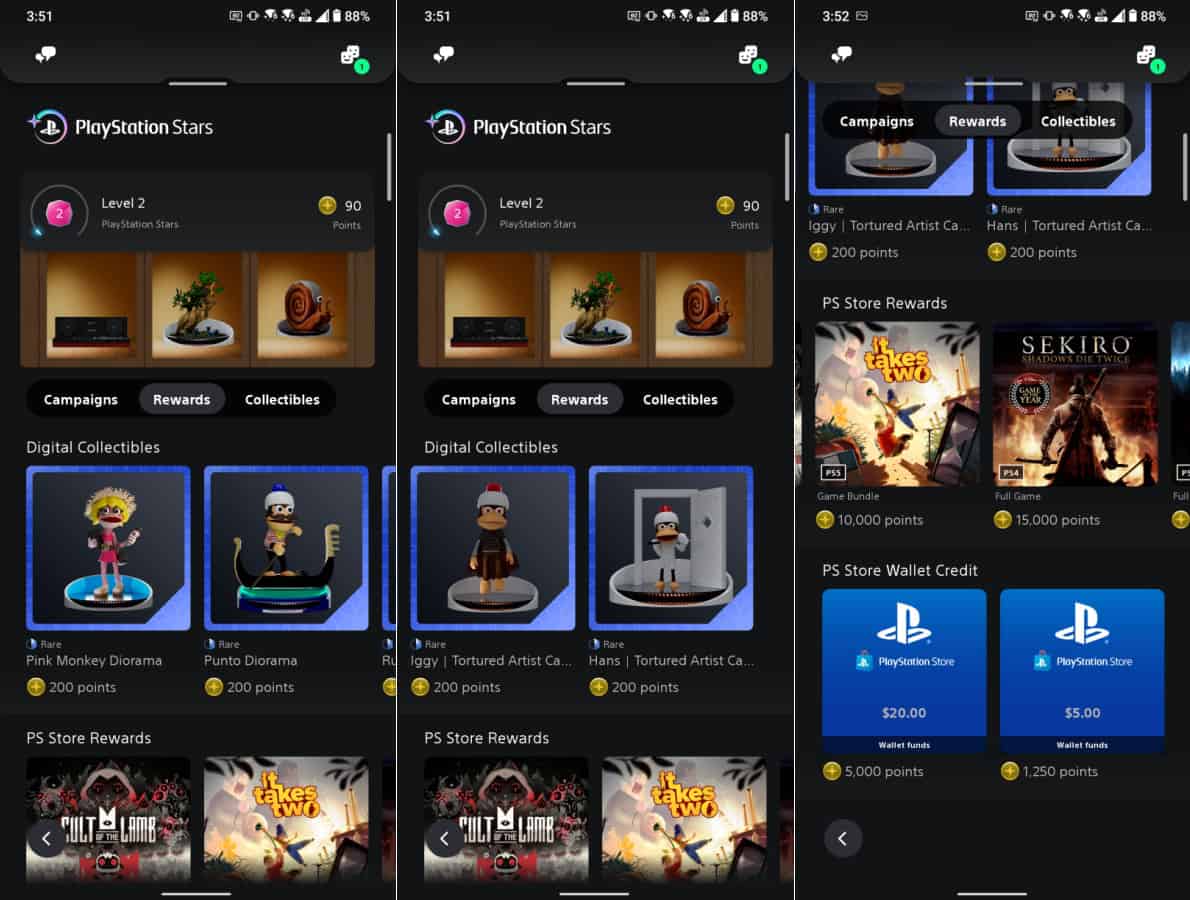 There’s really only two reward types. Points, and digital collectibles. Digital collectibles are going to be vast and varied and will range from collectibles themed after games to retro Sony products. Such as the Sony Chord Machine, a boombox and portable cassette recorder from 1982.

Digital collectibles can be gathered and put on display for your friends. Think of them like an achievement that you can show off. Sort of like digital bragging rights. You can add these collectibles to a display case which can also be changed to evoke a custom theme. You can also hide your display from public view if you wish. But in our opinion, the whole point of getting these is to show them off.

The other reward type is the points. And these are the rewards that will be harder to come by. They’re also the reward you really want. Because if you stack up enough of them you can get some pretty good stuff.

Points can be redeemed for numerous things like PSN wallet funds, more digital collectibles, and even full games. You can earn points by completing campaigns as they come up. Keep a close eye on campaigns and check on them regularly so you know when there’s one you can complete that will give you points.

You can also earn them by making eligible purchases in the PS Store if you’re a PlayStation Plus member.

How do you redeem points for rewards?

To redeem points, first you have to earn them. Once you’ve racked up some points over time, you can redeem as many points as you like within the PlayStation mobile app. On the PlayStation Stars page, tap on the rewards tab. Then find any rewards that you have enough points for, tap on them, and tap the “redeem” button.

If the reward is a digital collectible, it’ll be placed in your inventory on the collectibles tab. If you redeem aa game, then the game should automatically be added to your library. And if you choose PSN wallet funds, then those should automatically be added to your PSN wallet, ready for use. Both games and wallet funds will cost a ton of points though. For example, $5 in wallet funds costs 1,250 points. And a game like Sekiro: Shadows Die Twice is 15,000 points. $20 in wallet funds is 5,000 points.

Basically, what we’re saying is be prepared to save up your points for a while to redeem some of the better rewards.

Can rewards be traded?

Sony has confirmed that rewards cannot be traded with other accounts. You will need to have your own PlayStation account and be a member of PlayStation Stars to earn rewards. So those digital collectibles and rewards points will need to be earned by you specifically. This means you cannot buy a digital collectible that you were hoping to get your hands on if you happened to miss the campaign where you could earn it.

This is why it’s important to keep up on what collectibles are available if these are something you’re going to want to actually collect. Lest you miss a campaign that has one you really want. This also means digital collectibles have no monetary value. And the points only have a monetary value in the sense they can be stacked to redeem for things that cost money. But only for the person who earned the points.

How does leveling up work? 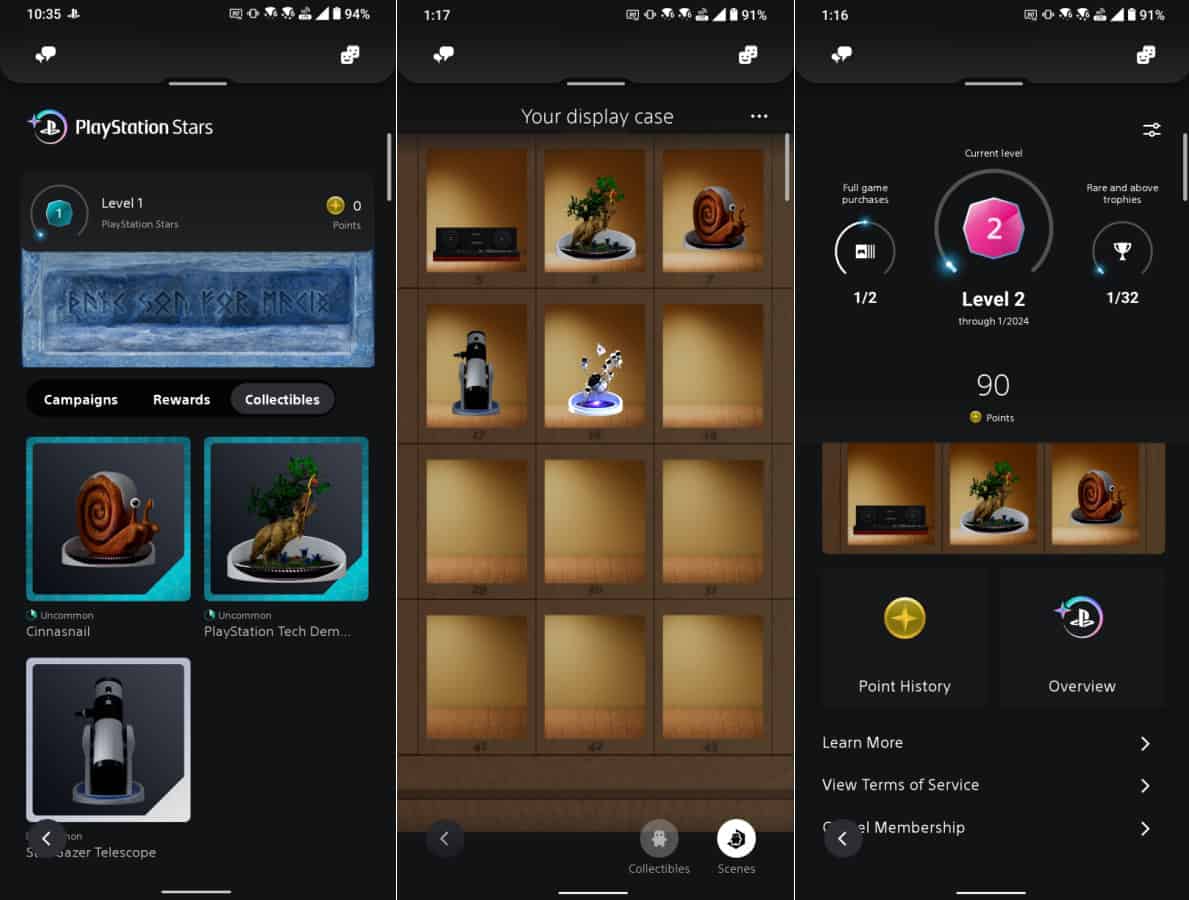 Leveling up is fairly simple to do and is split up into four different milestones. The milestones are what you need to do or achieve before reaching the next level. You’ll start at level 1 just by joining PlayStation Stars.

To move up to level 2, you’ll need to acquire 1 rare or above trophy, and buy one full game on the PS Store. Both of those are fairly easy to do. There’s nothing that states the full game has to be full price either. So you should be able to complete that part of the milestone by buying any full game. Even a game on sale for a steep discount. That being said, there’s no confirmation on what counts. So it is also possible that discounted full games won’t count towards this milestone.

As for the trophy, that’s simple enough. Launch any game you have and go for whatever the easiest uncommon trophy is. Once you’ve done both things, you should move up to level 2 and get the tier 2 benefits. Which are receiving a level 2 celebration collectible and access to all collectibles from level 1.

You can see all the milestones and tier benefits for each of the four levels below.

There will be exceptions though. For instance, the Hit Play/1994 Campaign required that you launch Death Stranding as one of the six games in the list that are needed for completion. But only the Director’s Cut version seems to count. As we couldn’t get the task to pop by launching the regular version through streaming or download and launching locally.

Keep this in mind for future campaigns.

Unfortunately, no. When we joined PlayStation Stars past purchases and past rare and above trophy acquisitions did not count towards the level up milestone. Nor did any of the previously launched games required for the Hit Play/1994 campaign. While a bit of disappointment, it’s not a difficult task to go through and redo anything you may need to do. And really you’re not redoing much.

The only thing that could be considered a redo is launching any specific games that are part of a campaign. And even then, you only have to let the game hit the main start menu in most cases. Which only takes a minute or so. The longest part of the process would be installing a game that was needed, since you have to wait for it to download. Assuming the game wasn’t installed already.

So while tasks aren’t retroactive, it’s for the most part easy to complete many of them.

How do you join PlayStation Stars? 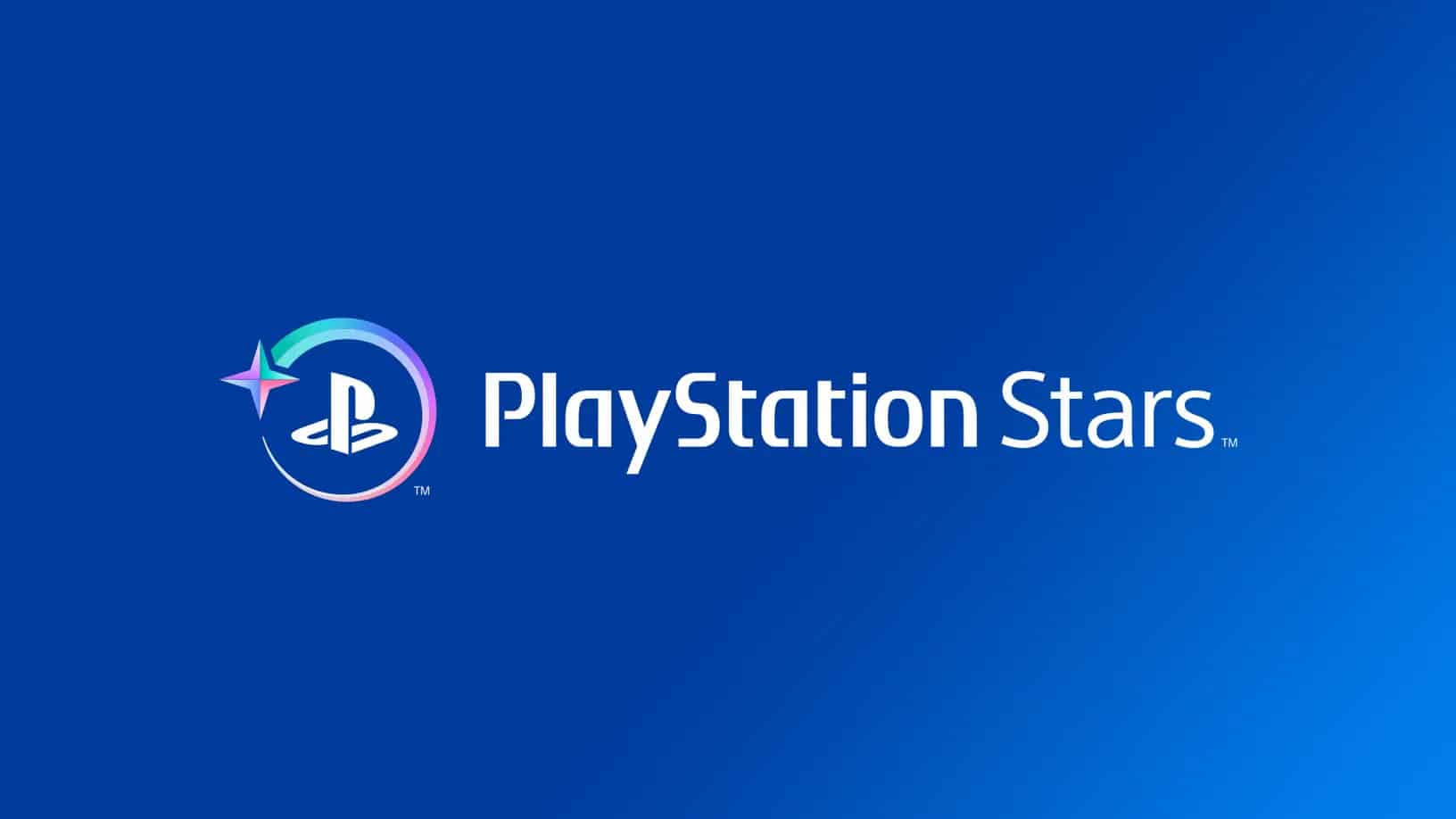 If you’d rather join the loyalty program from the web using your desktop or laptop, you can do that too. Just head to the PlayStation website, sign in with your account information, and click the “join now” button to get started.

Keep in mind you won’t be able to use most PlayStation Stars features from the web browser. You can see your current level, and how many points you’ve earned. And that’s it. To see the campaigns, look at your collectibles and access the display case as well as all other features, you have to use the mobile app.