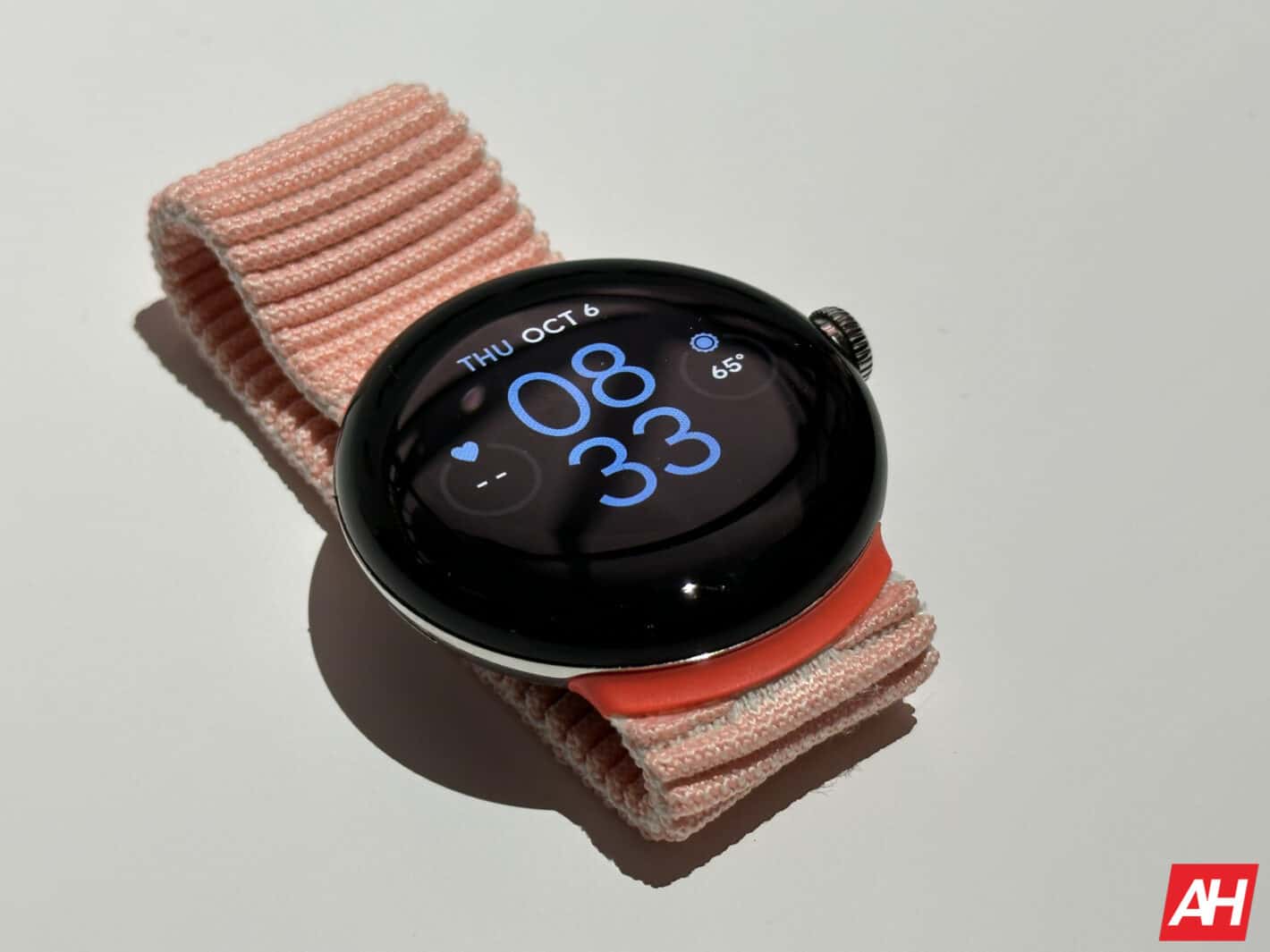 The Google Pixel Watch is official. Like, officially official. Yes Google showed it off at Google I/O back in May. But that was merely a teaser. This morning Google officially announced the Pixel Watch at its Fall Pixel event. And while we still have to put in some time with it for a proper review, we now know all there is (basically) to know about the ‘Google Pixel Watch.’

Whether you’re looking to move away from Apple or just another Wear OS option, Google is giving you another choice. And as a consumer that’s a good thing. Especially if you like the smooth domed glass design Google is offering. It’s also potentially the best smartwatch option for Pixel owners. Even more so for those looking to upgrade to the Pixel 7 or Pixel 7 Pro.

So let’s break down the Google Pixel Watch and all its nitty gritty details. Or at the very least, the most important parts of the device that you may be wondering about.

What is the Google Pixel Watch? 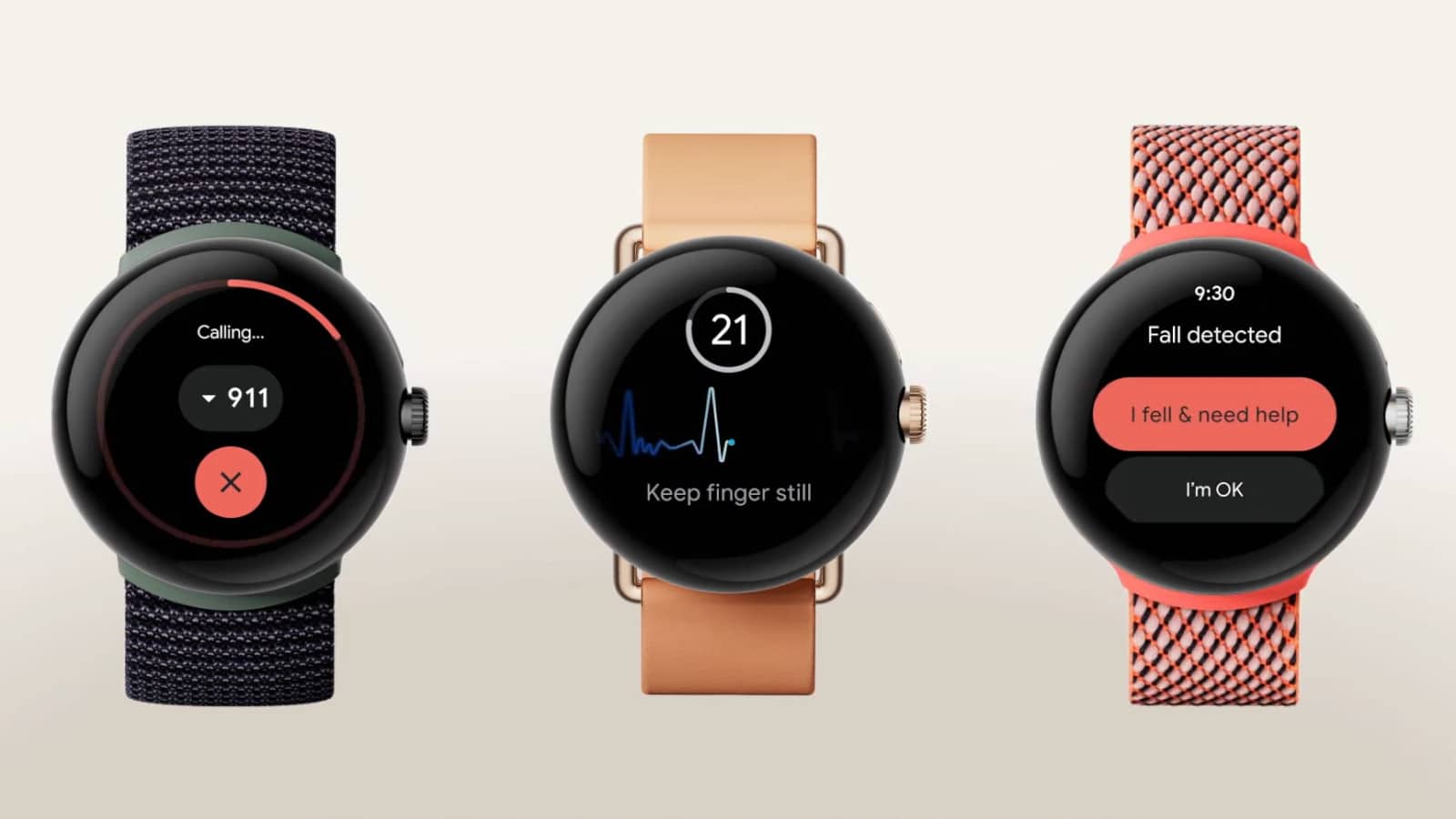 It’s Google’s first actual smartwatch. It was designed in-house and like the company’s Pixel phones, the Pixel Watch is meant to be the flagship device. It’s the posterchild for Wear OS and is a showcase of how seamless, feature-rich, stylish, and functional Google wants the platform to be.

The watch has actually been rumored for years but nothing of substance ever came up. That is not until earlier this year when Google teased it. Now Pixel fans have something tangible they can wrap around their wrists. As soon as it ships, of course. Speaking of shipping…

When does the Google Pixel Watch launch?

Technically, it launches today if you want to think about it like that. But in reality it launches later this month, officially on October 13. You can pre-order the watch starting today and as it stands it shows that deliveries will be made between October 14 and October 19. Although that all depends on the color you choose. Some seem to be shipping out earlier than others. We would say don’t let that sway your decision. But we get it if it does. When you’re excited about a product you tend to want it as soon as possible.

How much does the Google Pixel Watch cost?

This will depend on which you model you buy. There are two available models of the watch. A Bluetooth/Wi-Fi-only model, and one that will connect through Bluetooth, Wi-Fi, or LTE. The Bluetooth/Wi-Fi model retails for $349.99, and the LTE model retails for $399.99. The color you choose has no impact on the cost. Keep in mind though that if you go with the LTE model, you might as well consider the additional cost of adding an LTE data plan to it. Which will be a recurring monthly fee you need to pay for as long as you want to use the LTE feature.

You can buy it directly from Google or from third-party retailers like Amazon and Best Buy.

Where will it be available?

For starters it will be available in 9 different counties. This includes the US, Australia, Canada, France, Germany, Ireland, Japan, Taiwan, and the UK. Google may launch the watch in other regions in the future, but it doesn’t confirm this. As for what stores or retailers you can buy it at, in the US you can grab the watch directly from Google, or from retailers like Amazon and Best Buy as we’ve linked above. It will probably be available from carriers as well in the LTE model.

Outside of the US, availability may vary and you’ll need to check with your local retailers.

What are the available colors? 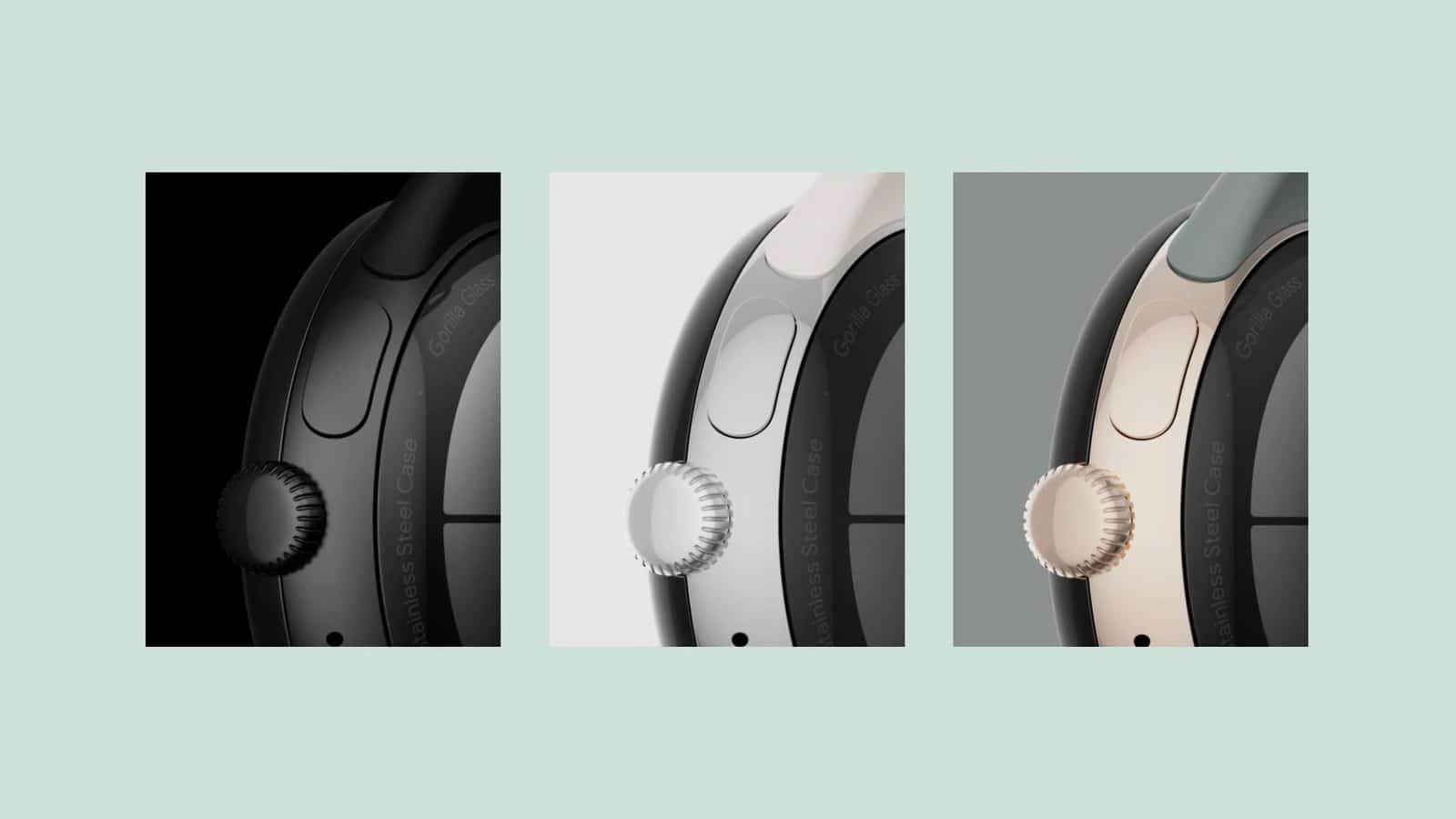 Google will offer the Pixel Watch in three colors. Matte Black, Polished Silver, and Champagne Gold. And then the bands will come in a multitude of colors and styles, made from various materials. The band that comes with the watch is called the Active Band. This is essentially the Infinity Band that comes with the Fitbit Sense and Fitbit Sense 2. It has infinity-shaped loops and is made from a soft-touch silicone/rubber material. It’ll be available in Hazel with the Champagne Gold case, Obsidian with the Matte Black case, and either Chalk or Charcoal with the Polished Silver case.

You can also pick it up in Lemongrass as a standalone band option. 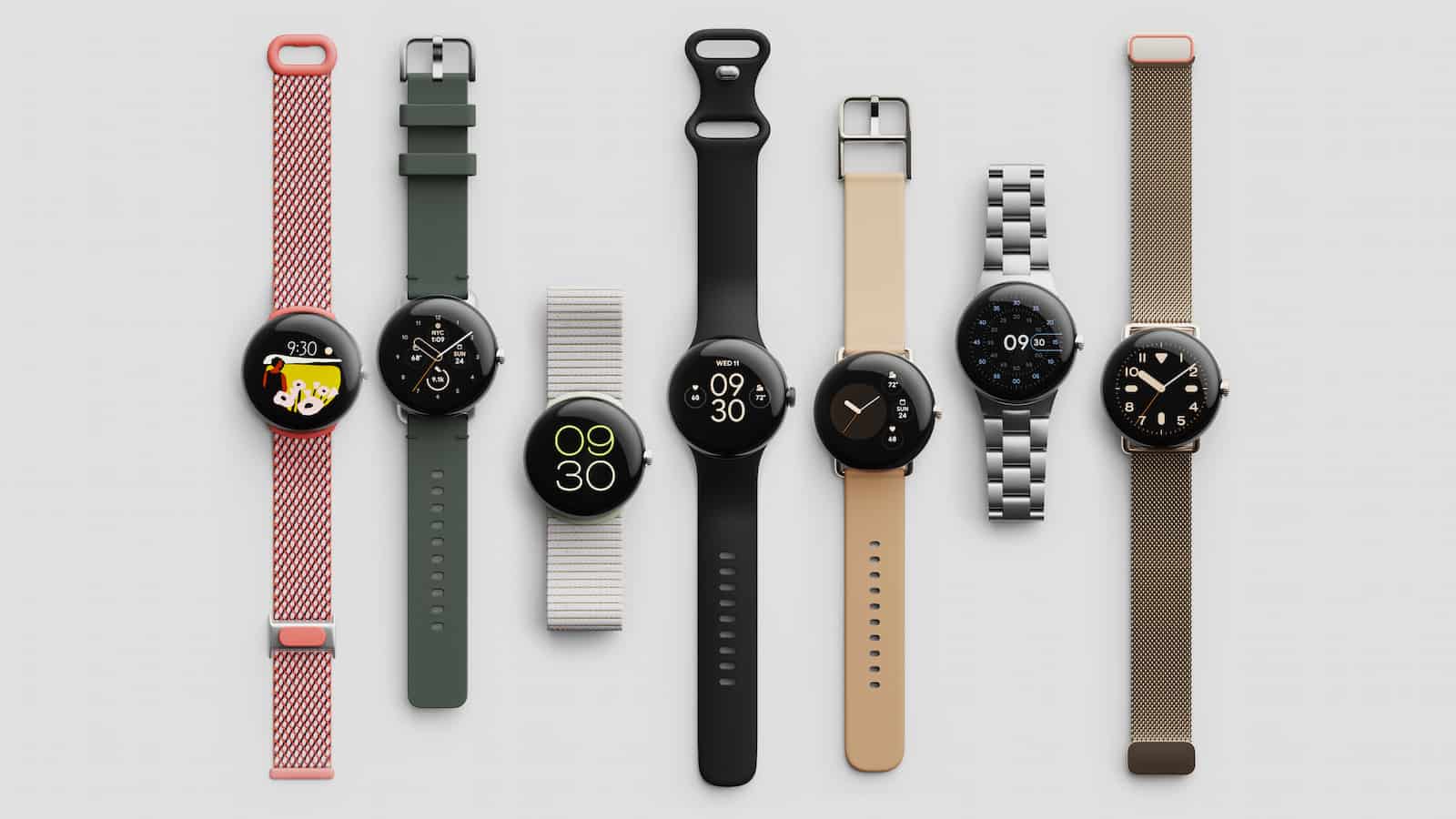 Yep. Google has actually designed and is releasing a handful of different band options for Pixel Watch owners. The one big downside is that you can’t use the Pixel Watch with third-party bands or straps. Due to the Pixel Watch’s unique twist and click locking mechanism for the bands. This means you’ll have to buy the bands from Google. At least for now, unless Google ends up working with partners to allow officially licensed bands for the watch. Though we don’t see that happening unless the watch is popular enough and other brands want to make accessories for it.

As for the official Google options, right now there’s the Active Band, a Stretch Band, a Woven Band, a Crafted Leather Band, and a Two-Tone Leather Band. As for colors, you can find them listed below.

That’s all of the officially available Pixel Watch bands for now. But it is worth mentioning that Google will offer both a metal link band and a metal mesh band at some point next year. They’re expensive though, so be prepared to spend a lot. They aren’t available to purchase yet, but Google does show them off in an official photo and they were shown off during today’s event.

What are the biggest features? 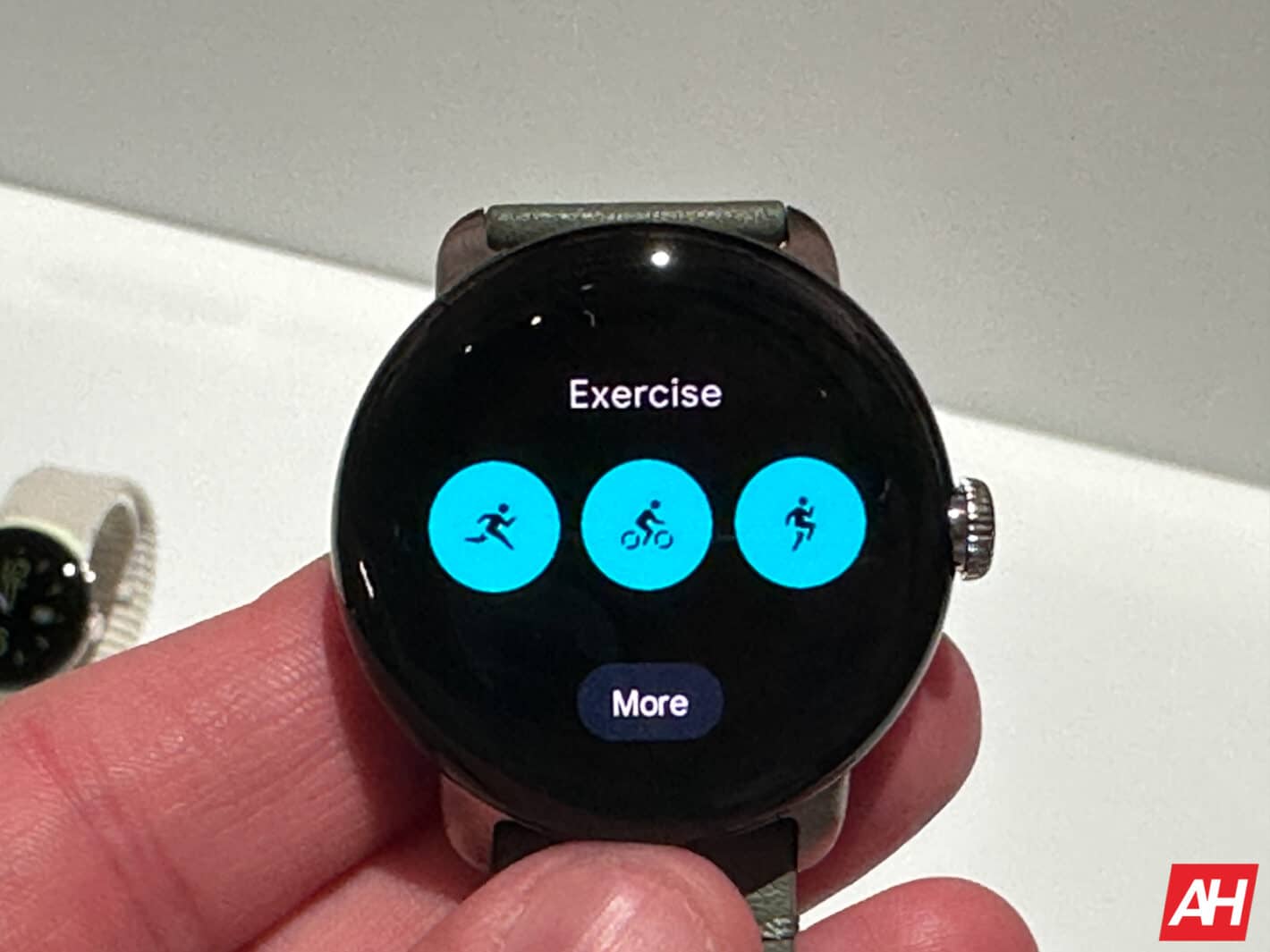 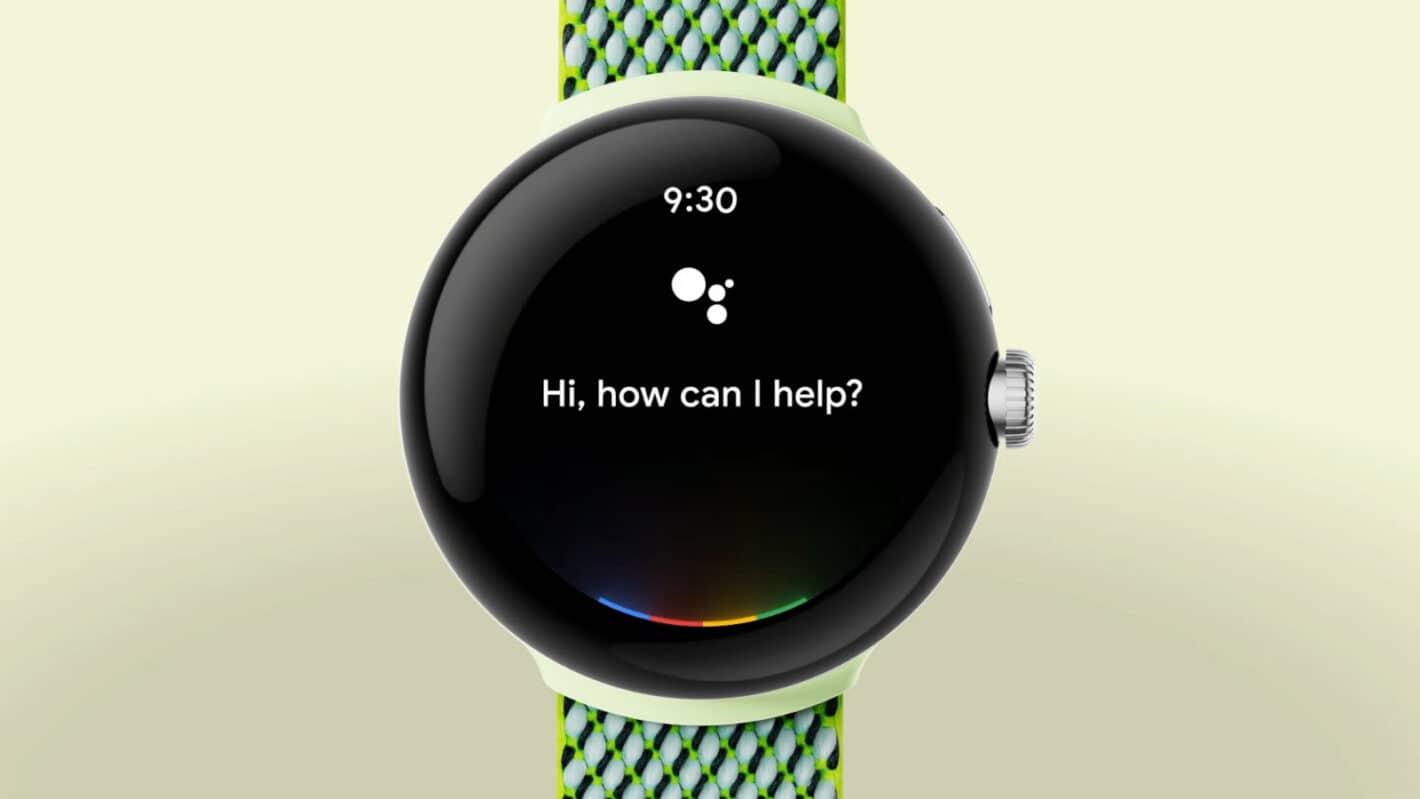 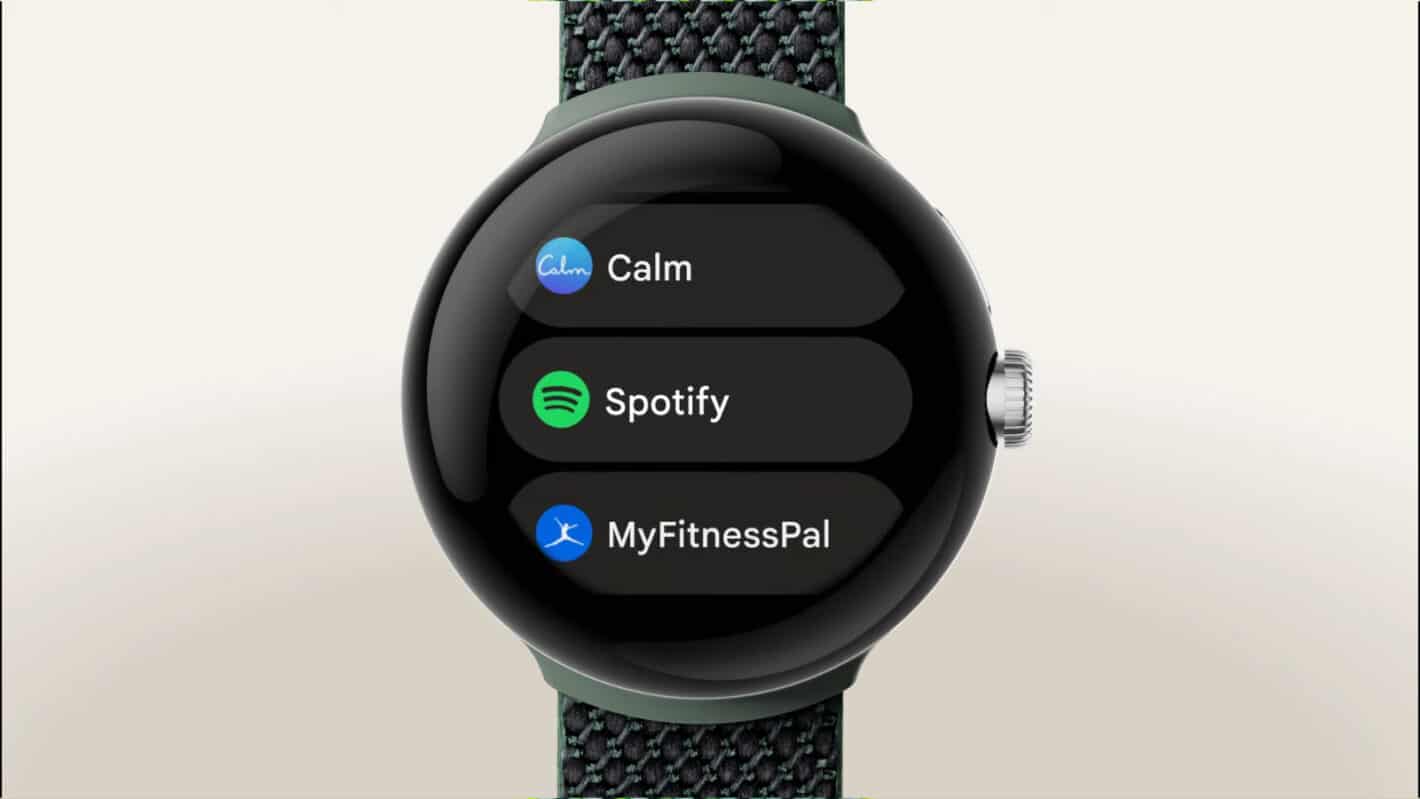 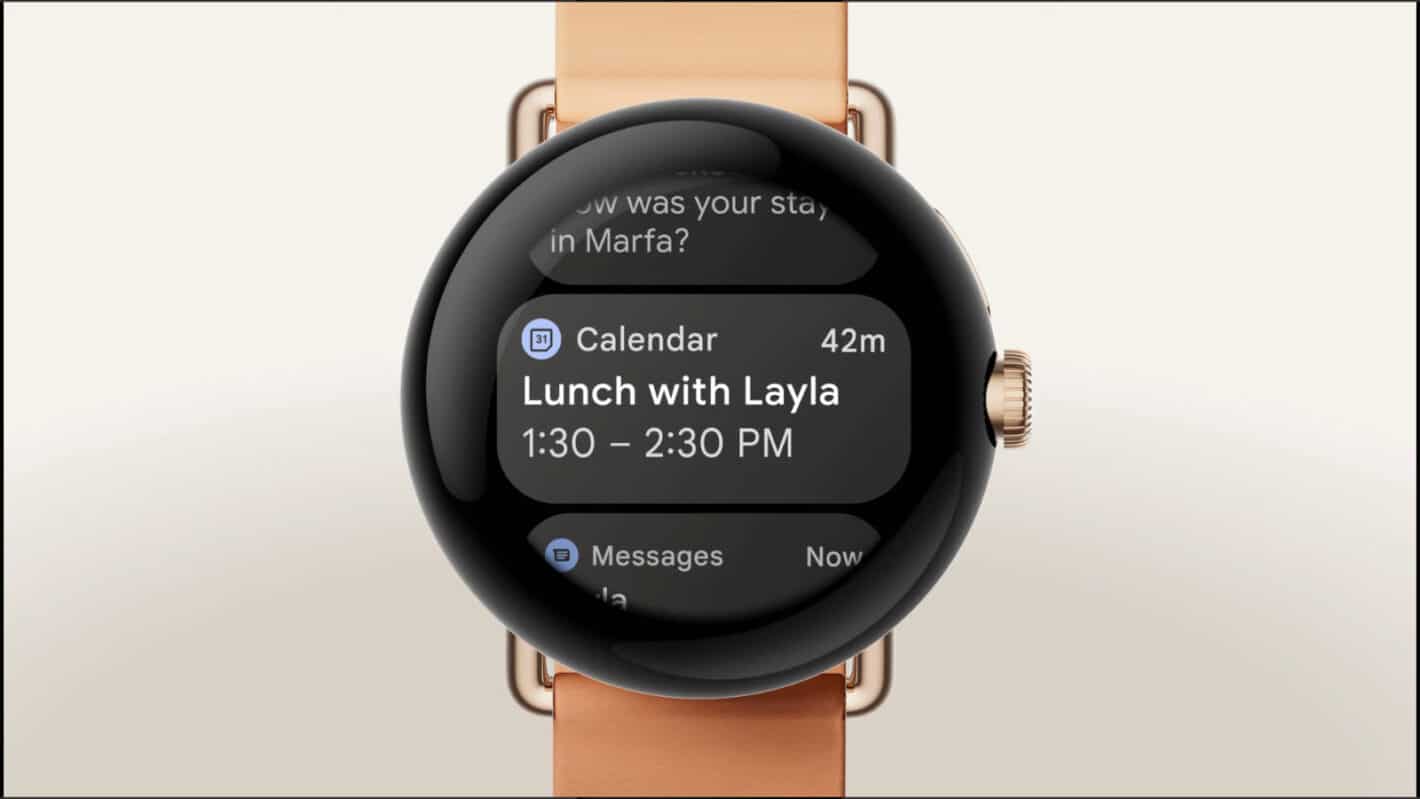 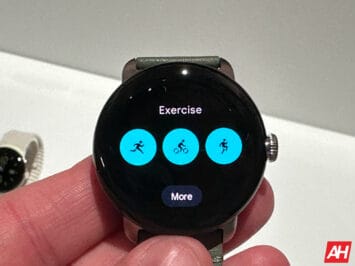 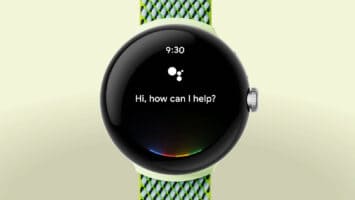 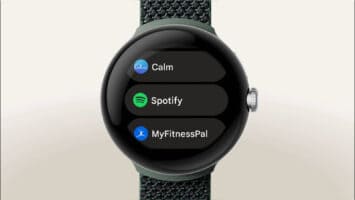 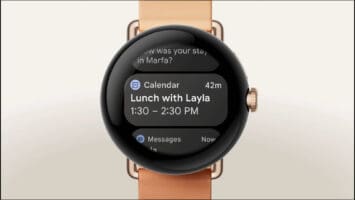 There are two big feature categories we’ll split things up into. Help features, and Health features. The help features include everything you’ve come to know and love from Google. Including Google Assistant, Maps, Calendar, Wallet and more. The watch also has an Emergency SOS for fall detection coming in 2023.

The Health features are everything that revolves around your health and fitness. And it’s all handled by Fitbit. The big features on the health side of things include Fitbit’s famous Active Zone Minutes, an ECG app for AFib detection, Sleep Score and Sleep Stages, Mindfulness Sessions and a whole lot more. In fact there’s a good bet that a lot of the features available on the Sense 2, are available on the Pixel Watch also.

Google does own Fitbit now after all. Users will also get third-party app support from Adidas, MyFitnessPal, Calm, Strava, Spotify and others. And when you buy a Pixel Watch from Google you get 3 months free of YouTube Premium, and 6 months free of Fitbit Premium.

How big is the watch? 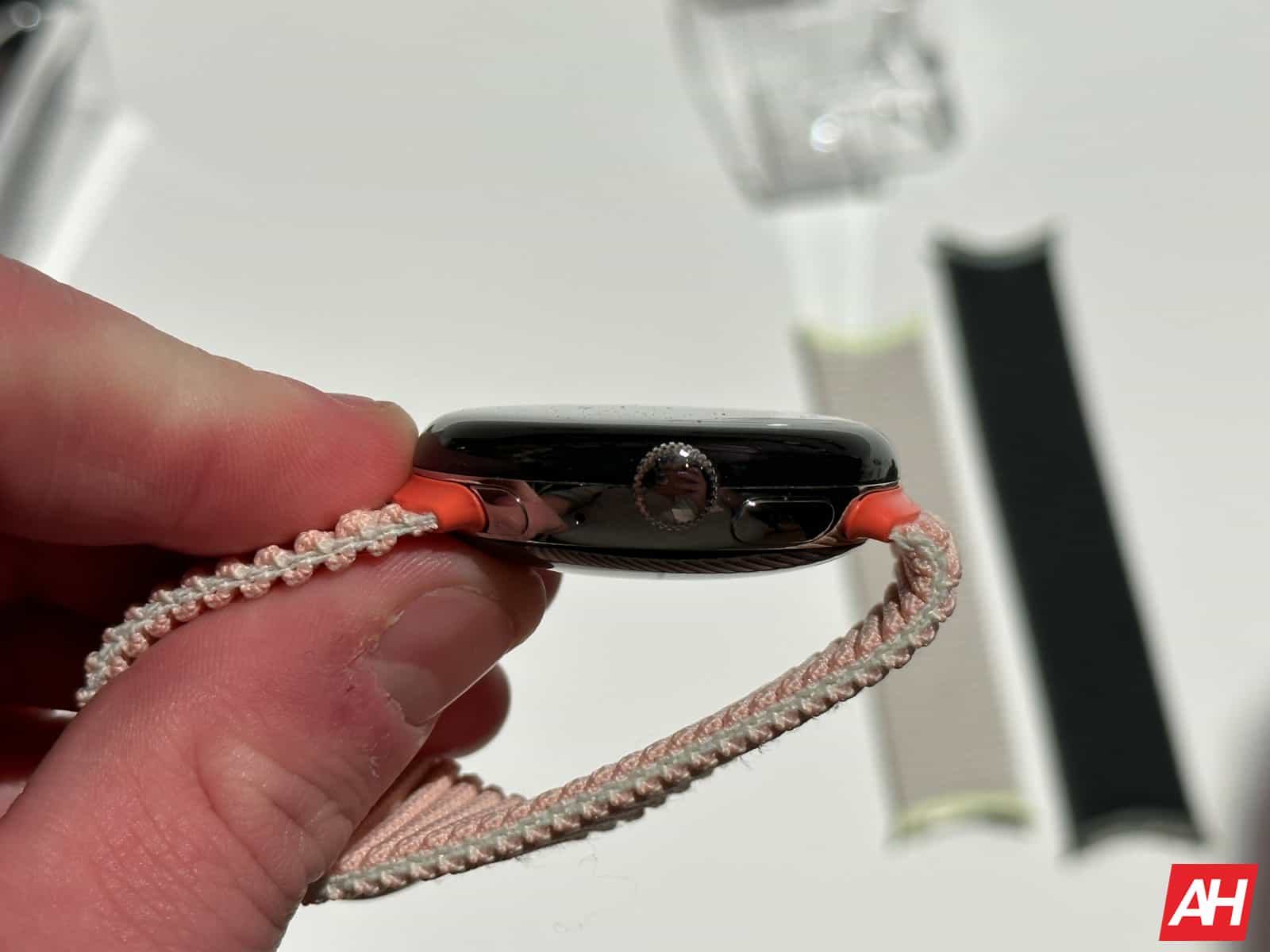 It’s not a massive chunky boi if that’s what you’re wondering. It measures 41mm in diameter which is actually kind of small. Though certainly not the smallest smartwatch on the market. It’s also 12.3mm in height, and without the band it weighs 36g. Obviously, the band you choose will change the weight. And each band is going to alter that slightly based on the material.

For example, the leather and metal bands probably weigh the most. So with those on the watch likely weighs more than when you use the Active Band, Stretch Band, or Woven Band.

How long is the battery life? 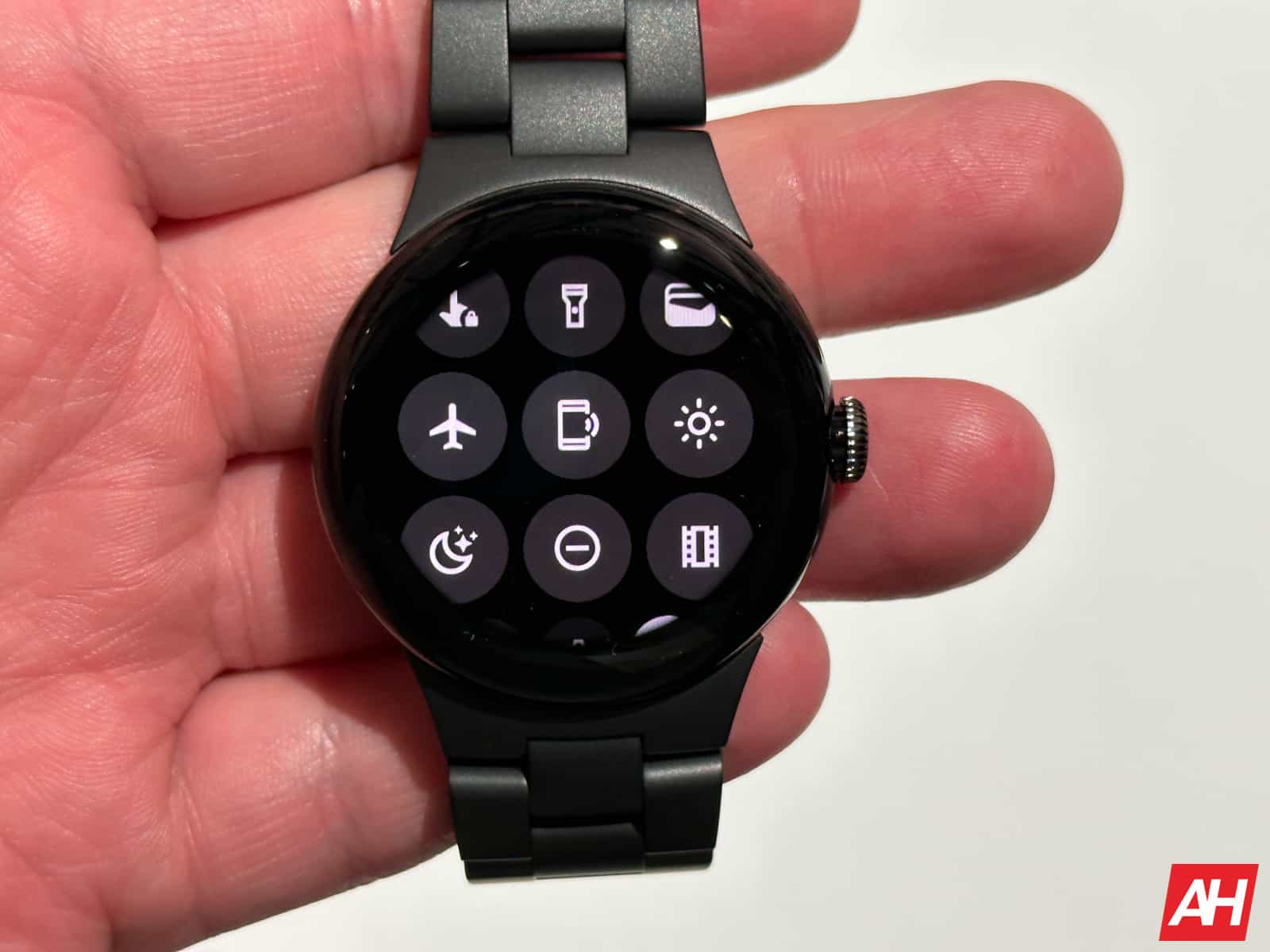 Ah yes, the point of contention for literally every smartwatch on the planet. How long is going to last me? It’s an important question to ask. Because you definitely need to know if you’re going to have to charge the watch up every night. Or in the morning if it charges quickly enough to be done before you need to jet off to work or school. Or anywhere else you need to go during the day when you finally leave the house.

Unfortunately, the Pixel Watch battery life isn’t great. Google’s official statement and spec sheet lists that it lasts up to 24 hours on a single charge. Which, is quite honestly very disappointing. Especially when you consider the competition. The Galaxy Watch 5 lasts for up to 50 hours on a single charge. And the Pro model boosts that up to a surprisingly long 80 hours. Though we never experienced times that long ourselves.

As for charging speeds, Google says the Pixel Watch can charge up to 50% in just 30 minutes. A full 100% will take about 80 minutes. Or if you don’t need quite the full amount, 80% will take about 55 minutes. All things considered, the charge times are quick enough. So even if the battery only lasts a day on a single charge, if you’re not averse to either brining your watch charger with you or buying a second one for travel, you can easily give it some juice when needed.

We did a full breakdown post of all the Google Pixel Watch specs and you can find that here. But the key highlights are as follows. It has a 292mAh battery, 32GB of storage, 2GB of RAM, and it runs on the Exynos 9110 System On Chip with a Cortex M33 co-processor. It also has an altimeter, a compass, an optical heart rate sensor, a blood oxygen sensor, a multi-purpose electrical sensor, an accelerometer, a gyroscope, and an ambient light sensor. It also comes running on Wear OS 3.5.

It has a 5ATM rating, so, no. It’s not waterproof. It’s water-resistant. It can withstand being in up to 50 meters of water. Though not for more than 24 hours. So you can probably take it swimming, it’ll be fine in the rain, and it should hold up nicely to sweat. If you drop it in a shallow pool, it should be ok there too. But Google does recommend keeping it away from soapy water or other liquids. It also states that the watch shouldn’t be used during high-speed or high-impact water sports.

The Pixel Watch comes with custom 3D Corning Gorilla Glass. Which is scratch-resistant. So it should be just fine if you stick it in a pocket with things like keys, coins, or accidentally bump it against stuff from time to time. That being said there’s no guarantee that continuously bumping it against walls or other hard surfaces won’t damage the display. So treat it like you would any other piece of electronic equipment you own. With care.

This isn’t the Galaxy Watch 5 Pro or the Apple Watch Ultra. Or any of the numerous watches from Garmin. All of which are built to withstand harsher conditions.

How long will Google support the Pixel Watch with updates? 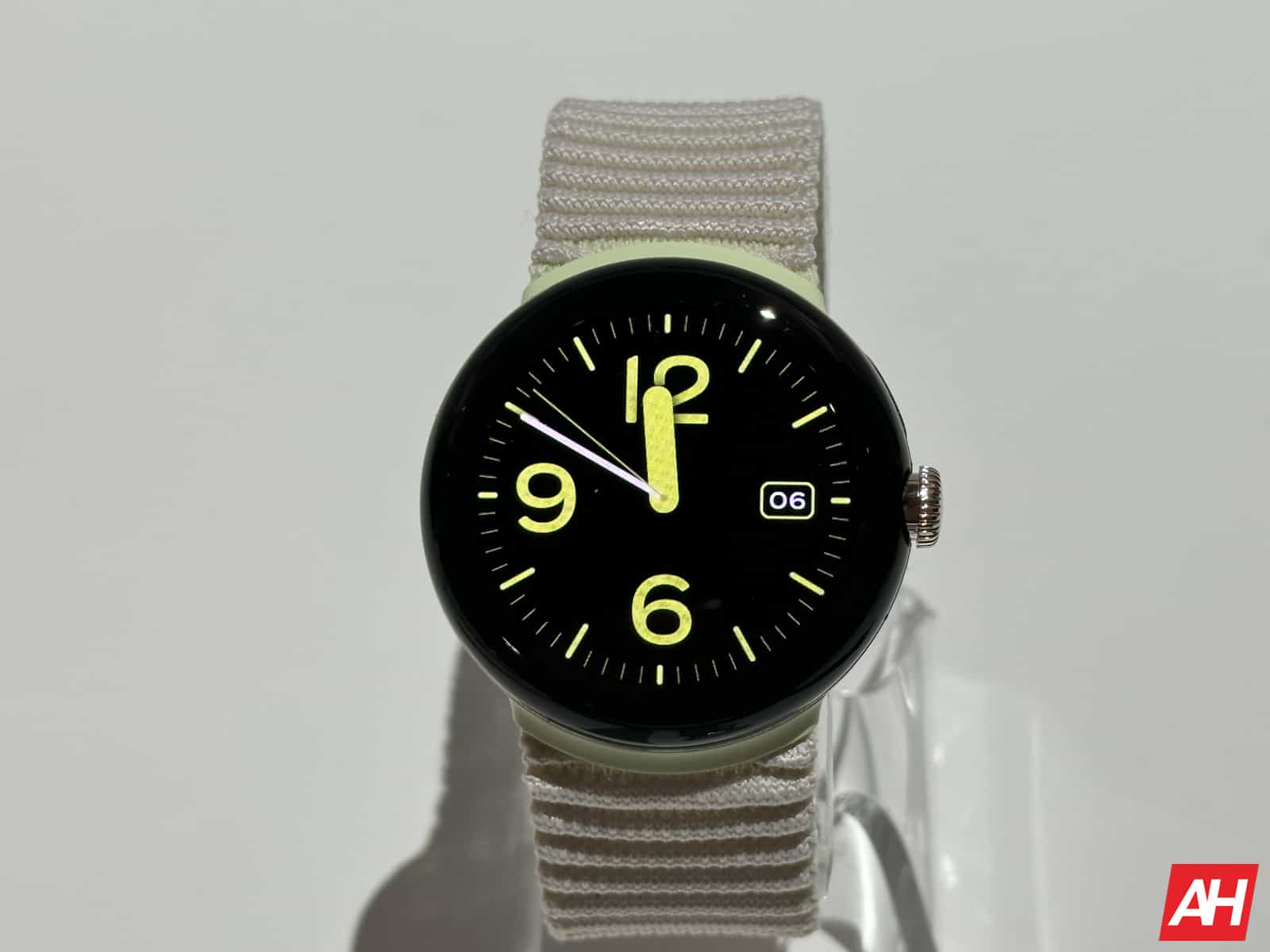 At least three years. Google has officially guaranteed that the Pixel Watch will receive software support for three years. That means you can expect it to go from Wear OS 3.5 to how ever many versions Google can stuff into a three-year time frame. After that, there’s no more guarantees that the watch will be updated with newer versions of the OS. Or that it will receive any updates at all after that point.

Can you customize the watch face?

Of course. This is a Wear OS watch after all. Out of the box though, it will have 19 customizable watch face options. And it supports Google Photos for watch faces too. And don’t forget, you could just install Facer on it. Which has endless options for you.

Will it support the Pixel 7 and Pixel 7 Pro only?

Nope. It will support those phones, and Google does highlight that it will “work seamlessly with the Pixel portfolio.” But it will also work with any Android phone that runs on Android 8.0 or later. That should be most phones by now. Regardless of manufacturer. That being said, it wouldn’t be surprising if it worked best with a Pixel phone. Just as the Galaxy watches work best with Samsung Galaxy phones.