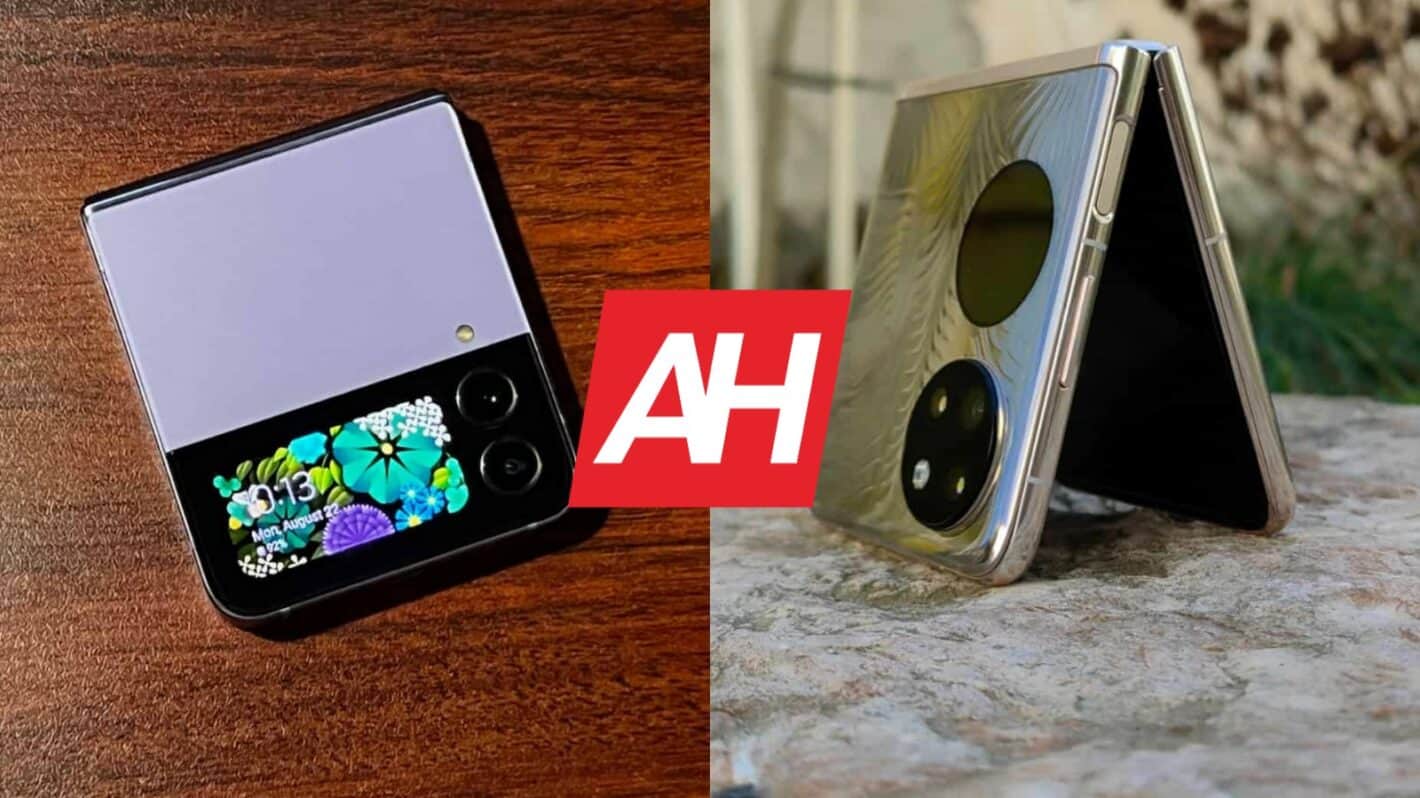 In this article, we’ll compare the Samsung Galaxy Z Flip 4 vs Huawei P50 Pocket. Both of these are clamshell smartphones, though they are fairly different. There are a lot of differences between them, ranging from the general design choices, to software builds. Both of these phones are quite compelling in their own right, though, which should make comparing them rather interesting.

We will first list their specifications, and will then move to comparing their designs, displays, performance, battery life, cameras, and audio performance. Do note that the Huawei P50 Pocket comes without Google services, but it includes Huawei’s own HMS. That may not mean much to some of you, but it’s worth noting, as the vast majority of users expect to get the Google Play Store and Google apps on their phones. Having said that, let’s get started.

Both of these phones are clamshell foldables, which folds right down the middle. So they’re quite tall and thin when unfolded. Both utilize metal for their frames, and glass panels on the back and front. They do look considerably different in comparison, though. The Gold Huawei P50 Pocket variant even has these design details that protrude from the glass panel, giving it an interesting feel.

Both have a large foldable display, with thin bezels, and a display camera hole that is centered. Their cover displays are immensely different, which is easily visible when you look at them. The Huawei P50 Pocket has a much smaller cover display. They do have a rather similar in-hand feel, though, but you will notice the fact the Huawei P50 Pocket is wider in your hand. That is especially noticeable when you use it unfolded.

The Huawei P50 Pocket is also taller, and slightly thicker than the Galaxy Z Flip 4, but the difference is minimal. It’s also 3 grams heavier, but you won’t feel that difference when you hold it. Both smartphones are quite slippery, so do note that before you pick one of them. Using a case may not be a bad idea at all. They both do feel premium in the hand, and have great hinges. You’ll feel confident folding and unfolding them, but do note that only the Galaxy Z Flip 4 offers an official water resistance rating.

Both of these two phones have two displays. The Huawei P50 Pocket has a much smaller cover display, as already mentioned. Let’s start with Samsung’s smartphone. The Galaxy Z Flip 4 includes a 6.7-inch fullHD+ (2640 x 1080) Foldable Dynamic AMOLED 2X main display. That panel offers a 120Hz refresh rate, and it supports HDR10+ content. It also gets quite bright at 1,200 nits of peak brightness.

The Huawei P50 Pocket has a 6.9-inch main display. That is a Foldable OLED panel with a 120Hz refresh rate, and it offers a resolution of 2790 x 1188. The display can project up to 1 billion colors, in case you were wondering. The Huawei P50 Pocket does offer a higher ppi, when it comes to its main panel.

What about the cover displays? The Galaxy Z Flip 4 has a 1.9-inch Super AMOLED cover display. It offers a resolution of 260 x 512, and it’s protected by the Gorilla Glass Victus+. The Huawei P50 Pocket, on the flip side, has a 1.04-inch OLED panel with a resolution of 340 x 340. This display is higher-res in comparison, but it’s really tiny.

The main displays on both phones are gorgeous. They are vivid, offer good viewing angles, and are quite responsive. The blacks are deep, and using these two displays feel nice, it doesn’t feel like you’re touching cheap plastic or anything of the sort. The cover displays are a slightly different story. The panel on the Galaxy Z Flip 4 is much more usable, as it’s considerably larger. The display on the Huawei P50 Pocket is really small, and that limits its usability. Technically, it’s a nice display, though, and sharp. You’ll definitely be having different use cases for these two panels, and chances are you’ll be unfolding the Huawei P50 Pocket more often.

In the previous paragraph, I said that the end result is similar. What did I mean by that? Well, I mean they offer similar performance, as it great performance We did not really notice any lag while using either of these two smartphones. The chip inside the Galaxy Z Flip 4 is more powerful, and better when it comes to power consumption, but in regular, day-to-day use, they both performed admirably. That goes for regular tasks and gaming, it doesn’t really matter. You’ll get excellent performance with both.

The Galaxy Z Flip 4 includes a 3,700mAh battery, while the Huawei P50 Pocket has a 4,000mAh battery pack. Truth be said, both phones offer good battery life. We were able to get better results with the Galaxy Z Flip 4, though. Getting over 7 hours of screen-on-time is a possibility, if you’re not straining the phone with gaming and similar tasks. The Huawei P50 Pocket is also able to get to 6-6.5 hours of screen-on-time, at least during our testing.

That’s good battery life, in general. It’s not stellar, as some other phones offer, but it’s more than good enough. Do note that your mileage may vary, though. Each of us use our phones differently, and have different usage conditions as well. Do note that gaming will probably drain those batteries noticeably quicker, especially if the two phones get hot enough.

These two smartphones have considerably different camera setups, but they both deliver good results. The pictures do look different in comparison, though. More on that soon, let’s talk hardware first. The Galaxy Z Flip 4 has two 12-megapixel cameras on the back, wide and ultrawide units. The Huawei P50 Pocket includes three cameras on the back, 40-megapixel and 32-megapixel wide-angle cameras, and a 13-megapixel ultrawide unit. 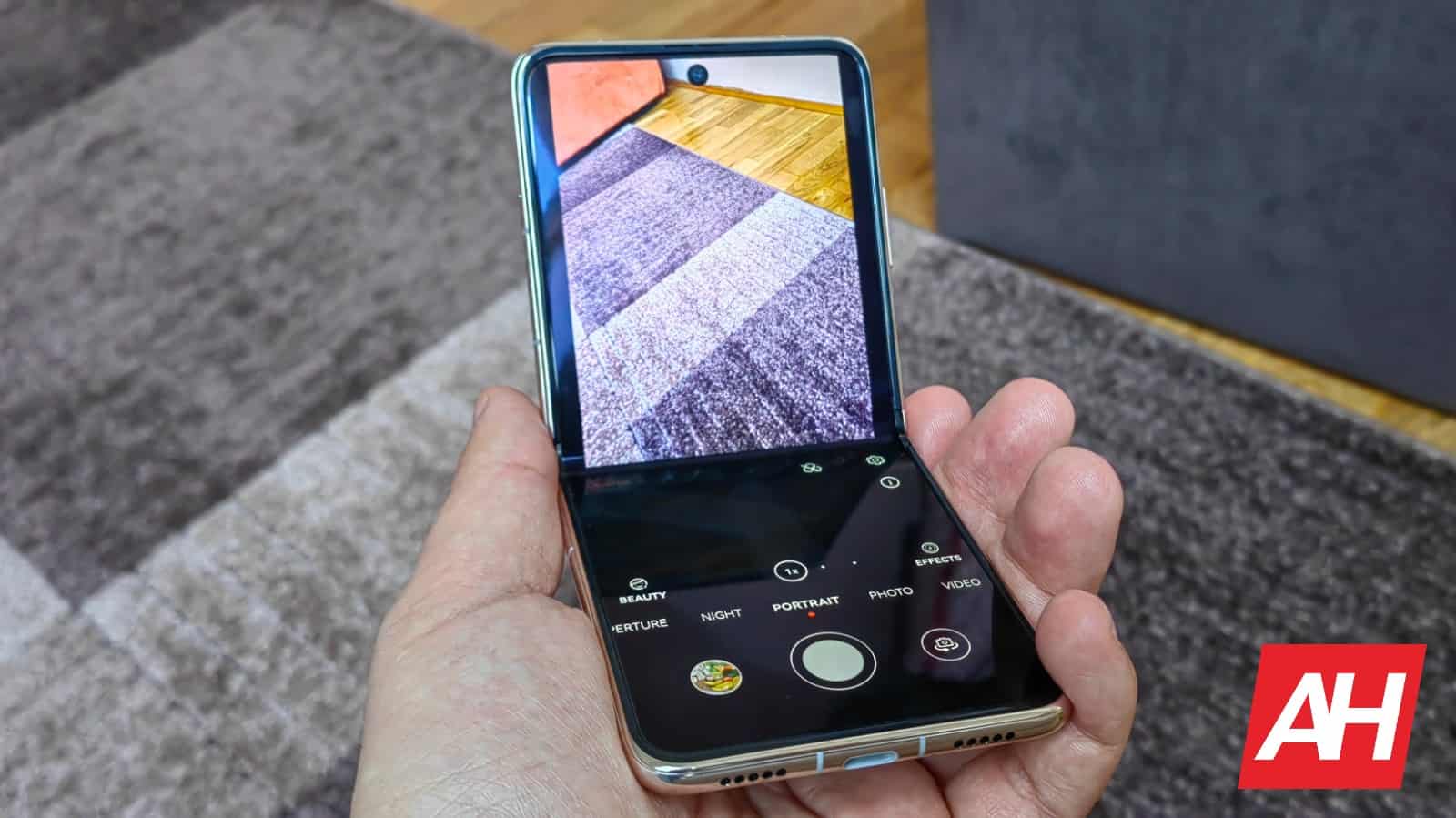 Both main and ultrawide cameras do a good job on both phones, in basically all lighting conditions. You will notice that pictures from the Galaxy Z Flip 4 do end up being more saturated, if you prefer that look. The Huawei P50 Pocket’s results are closer to real life. The level of detail is excellent on both phones, though the P50 Pocket is a bit better in that regard. Huawei’s foldable also keeps a great balance in color temperature between wide and ultrawide cameras, which is not something we can say for the Galaxy Z Flip 4.

The Galaxy Z Flip 4 does have a really good ultrawide camera, though, there’s no doubt about that. In low light, they both do a good job, but the Huawei P50 Pocket does manage to retain more detail from the shadows. All in all, the camera performance from both phones is good enough for the vast majority of people. It’s not the best in the market, but it’s really good nonetheless.

As is the case for most higher-end devices out there, these two phones don’t have an audio jack. You will have to utilize a Type-C port if you want a wired connection. What they do offer is Bluetooth 5.2 (A2DP, LE). The sound you’ll get is good, regardless of whether you use wired or wireless connection.

There are also stereo speakers on both phones, though the ones on the Galaxy Z Flip 4 are a bit richer-sounding. These have been tuned by AKG as well, by the way. Both sets of speakers do get quite loud, and they’re well-balanced.