The OnePlus 8T and Google Pixel 5 are both brand new smartphones. These two devices are amongst the most powerful devices their respective companies have to offer at the moment. For that reason, it seems appropriate to compare the OnePlus 8T vs Google Pixel 5. That’s exactly what we’ll do in this article.

Both of these smartphones are already available to purchase. They are considerably different, though. The Google Pixel 5 may be the most powerful smartphone Google announced this year, but it cannot really measure up to the OnePlus 8T in the spec department. It comes with a mid-range SoC, for example, and that’s only a part of the story.

The Google Pixel 5 may not be competing in the spec department, but it does have a lot to offer in general. The OnePlus 8T delivers in both specs, and performance departments, and we’ll take a closer look below. As per usual, we’ll compare the two devices across a number of categories. We’ll first list their spec sheets, then move to the design, display, performance, and other categories.

When it comes to the design, the OnePlus 8T and Google Pixel 5 are considerably different phones. Sure, when you look at them from the front, they may seem similar, but that’s about it. Both devices do include a display camera hole in the top-left corner, and yes, both offer that bezel-less design. The Pixel 5 does have uniform bezels all around the display, while the OnePlus 8T’s bottom bezel is slightly thicker than the rest.

Both phones also include a flat display, by the way. As soon as you flip the two phones over, you’ll see considerable differences… and most importantly, feel them. The OnePlus 8T comes with a glass back, while the Pixel 5 has metal on the back which has a coating on top of it, which feels like plastic with a tad of rubbery material. The Google Pixel 5 is much more comfortable to hold because of it, and it’s less slippery… a lot less. 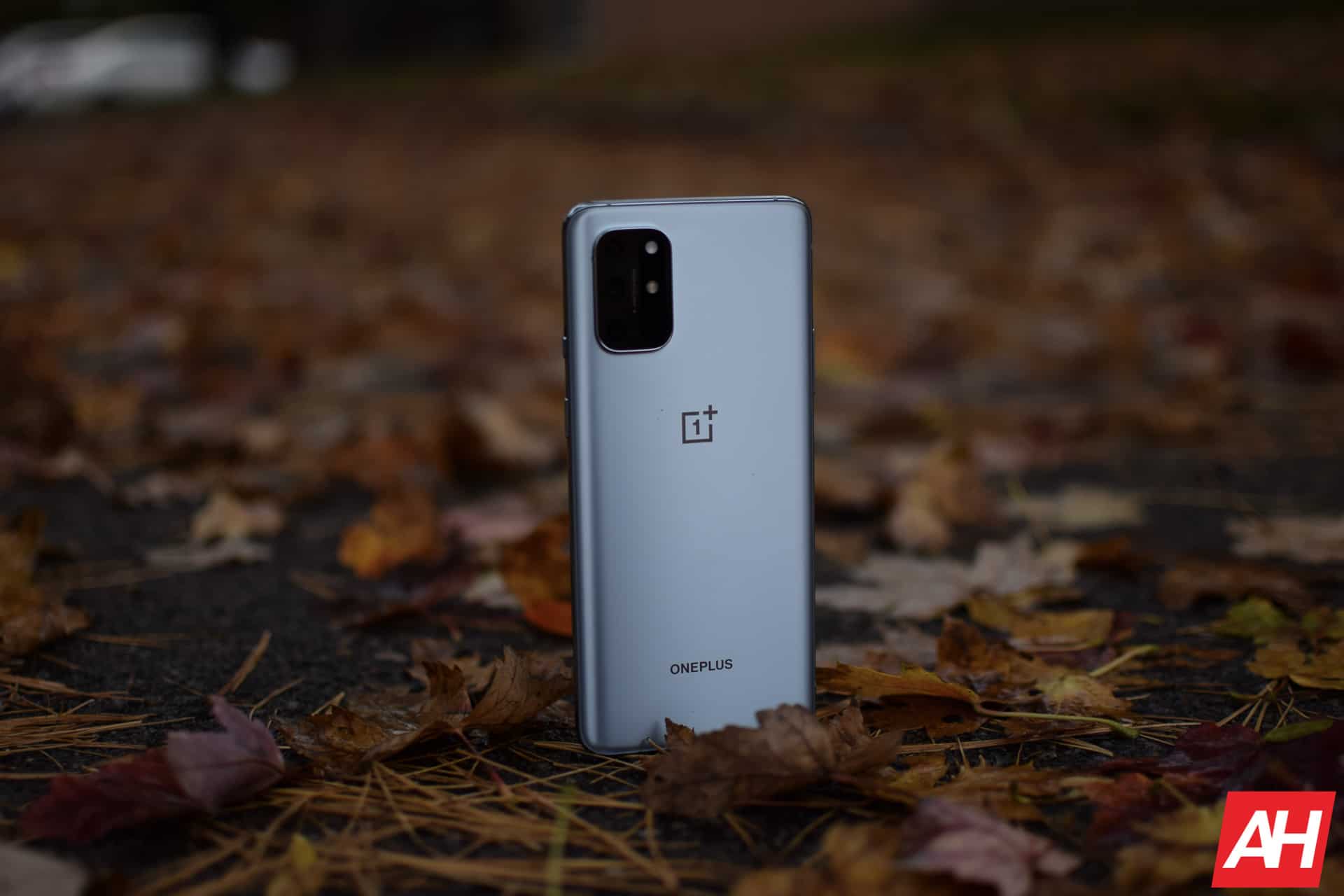 Both of these phones have fairly large displays, but the OnePlus 8T’s is larger. That handset features a 6.55-inch fullHD+ display. The Google Pixel 5, on the other hand, includes a 6-inch fullHD+ panel. Both of those are OLED displays, both are flat, and both are high refresh rate panels. The OnePlus 8T’s display does offer a higher refresh rate, though, 120Hz vs 90Hz on the Pixel 5.

The OnePlus 8T’s panel also offers a taller aspect ratio, 20:9 vs 19.5:9. The OnePlus 8T’s display is protected by the Gorilla Glass 5, while the Gorilla Glass 6 is included on top of the Pixel 5’s panel. Both of these displays do support HDR10+ output, by the way. In real life, both displays are great. They both offer vivid colors, and black are as deep as you’d expect them to be. Viewing angles are also quite great, so no problem there.

The OnePlus 8T’s panel is a bit easier to use outdoors, when the sun is shining, though. The Pixel 5’s panel is not that bright. That’s not a huge issue, as you can still use it, but it’s something worth noting. Other than that, there’s really nothing to complain about here. And no, the fact these are fullHD+ displays is not a minus, as it’s basically impossible to see any pixelization, nor difference between good fullHD panels, and QHD panels these days.

Both of these phones perform admirably. The OnePlus 8T is, without a doubt, the more powerful device here. It is fueled by the Snapdragon 865 SoC, and it comes with faster storage (UFS 3.1 vs 2.1). That being said, that’s not something you’ll notice in day-to-day usage. The Snapdragon 765G fuels the Pixel 5, and that is an excellent processor. You will notice the difference when launching games, though, as the OnePlus 8T will do it quicker.

Chances are you won’t notice the difference in games either, unless they’re really graphically demanding. In those cases, the OnePlus 8T may perform better. As long as you’re not playing heavy games on your phone frequently, the Pixel 5 can handle anything you throw at it. Both phones also support 5G connectivity, by the way. They’re both incredibly fast when it comes to multitasking, and using your phones day-to-day, for regular tasks.

Their high refresh rate displays do help make them feel even smoother. The OnePlus 8T’s display is smoother, though not everyone can see that. The difference between 90Hz and 120Hz refresh rate is not as obvious as when you move from 60Hz. In any case, both of these phones are excellent performers. Chances are that you’ll be just fine with inferior hardware inside the Pixel 5, if that’s what you’re worried about. Software offerings on both phones are also polished.

Battery life on both of these phones is stellar, to say the least. The OnePlus 8T does include a larger battery, a 4,500mAh unit, but it does have a larger display and a higher refresh rate one, at that. The 4,080mAh battery inside the Google Pixel 5 is more than enough to keep that phone going for a long time. Most users can easily cross the 7-hour screen-on-time mark in a single day, with either of these phones.

Both of them are really well optimized in the software department, and that definitely helps things. These are amongst the best battery life smartphones in 2020, at least when it comes to mainstream phones. They’re really excellent in that department, though it always depends on your usage, of course. Your mileage may vary. If you do a lot of processor-intensive tasks, that will affect battery life, of course. That’s just an example.

Google’s Pixel smartphones are known for their great camera performance, and the Pixel 5 is no exception. Even though it has an aging main sensor, this phone is capable of producing great results. The dynamic range is unreal, and the phone produces extremely well-balanced photos. The HDR is also excellent.

The OnePlus 8T, on the other hand, is nothing to scoff at, quite the contrary. The phone offers an improved camera performance compared to the OnePlus 8, despite the fact it has the same sensor on the inside. Do note we’re talking about the regular OnePlus 8 here, not the OnePlus 8 Pro. Images coming from the device turn up to look really great, although some sharpening and processing is noticeable. They do tend to come out a bit over-saturated sometimes.

In daylight, the OnePlus 8T picks up a lot of detail. In fact, when you zoom in, more often than not, the OnePlus 8T will offer more detail than the Pixel 5 due to a larger sensor. The Pixel 5’s images do look better (more of then than not), though. The Pixel 5 also does a better job in low light. The phone is capable to pull out a lot of detail from the shadows thanks to Google’s algorithms, and its Night Sight mode. OnePlus’ Nightscape mode does a really good job as well, but the Pixel 5’s camera will beat it in low light in most cases.

Both smartphones offer great cameras, there’s no doubt about that. OnePlus has come a long way when it comes to camera performance, and it managed to do great things with the Sony IMX586 inside of this phone. So, it all depends on what you prefer, of course.

When it comes to the audio department, well, things are interesting. Both phones offer stereo speakers, even though in the case of the Pixel 5, that’s kind of a half-true type of situation. It does include two speakers, but the secondary one is included below the display. It does not offer a traditional second speaker, so the overall sound quality coming from the speakers is better on the OnePlus 8T. Its speakers are louder, though you’ll get quality sound out of both phones. The Pixel 5’s main speaker is excellent.

Neither of the two phones offers a 3.5mm headphone jack. You’ll have to rely on a Type-C port, or Bluetooth connectivity for your audio needs. Once you hook up a good pair of headphones, you’ll be able to enjoy really good audio. Both phones are fairly good, though they’re not made for audiophiles. They do not come with fancy DACs or anything of the sort.