In this article, we’ll compare the Google Pixel 5 vs OnePlus 9 Pro. These two phones are the best Google and OnePlus have to offer, respectively. Some of you would say this is not exactly a fair comparison, as the price gap between these two phones is huge. Well, that may be the case, to a degree, but the Pixel 5 is the best Google has to offer at the moment, and it can hold its own, that’s for sure.

Based on specs, the Google Pixel 5 is a mid-range smartphone. On the flip side, the OnePlus 9 Pro is a premium, flagship smartphone, in almost every way. The difference in price tags for these two phones is almost $300. Can the Google Pixel 5 compete with the OnePlus 9 Pro despite that? Well, that’s what we’re here to find out. We’ll do our best to compare these two phones across a number of categories, so that you have an easier decision as to which one to buy.

When it comes to the design, these two phones are immensely different in comparison. The Google Pixel 5 is much smaller than the OnePlus 9 Pro, not to mention that it comes with a flat display. It is made out of metal, but its back side is covered by resin, aka fancy plastic that feels… well, really good in the hand. The Google Pixel 5 is much less slippery than the OnePlus 9 Pro, while it also comes with uniform bezels.

Both smartphones include a display camera hole in the top-left corner. The OnePlus 9 Pro is made out of metal and glass, and its bottom bezel is ever so slightly thicker than the rest of them. The OnePlus 9 Pro is quite slippery, it has a curved display, and it’s quite a bit heavier than the Pixel 5 as well. The rear camera setups on these two phones are placed in the same spot, but are vastly different. It’s also worth saying that the OnePlus 9 Pro includes an in-display fingerprint scanner, while the Pixel 5’s is visible on the back.

The Google Pixel 5 is much shorter, narrower, and thinner than the OnePlus 9 Pro. It is also almost 50 grams lighter than OnePlus’ flagship. It does have a noticeably smaller display, though, which is obvious considering the size difference. These two phones are made for completely different types of users. If you like heavier phones with larger displays, and don’t mind the curved panel, the OnePlus 9 Pro is for you. If you prefer smaller devices that are less slippery, and still have a large display, the Google Pixel 5 may be the better choice. The Pixel 5 is not small, per se, and yet it’s much easier to use than the OnePlus 9 Pro, especially with one hand.

The two phones are quite different when it comes to design, and the same goes for their displays as well. The Google Pixel 5 sports a 6-inch fullHD+ (2340 x 1080) OLED display with a 90Hz refresh rate. This display is flat, and it supports HDR10+ content. Google included the Gorilla Glass 6 protection for this panel. The Pixel 5’s display is of an LTPS variety, it doesn’t support an adaptive refresh rate.

The OnePlus 9 Pro, on the other hand, includes a 6.7-inch QHD+ (3216 x 1440) Fluid 2.0 AMOLED display. This panel is curved, and it offers a 120Hz refresh rate. It is an LTPO display, so it supports an adaptive refresh rate. HDR10 content is supported here as well, while the display also comes with 1 billion colors. This display is protected by the Gorilla Glass 5, in case you were wondering. Both displays include a display camera hole in the top-left corner.

These two displays could not be more different. The OnePlus 9 Pro does have one of the best displays on the market at the moment, and it shows. It can get considerably brighter than the Pixel 5’s panel, at 1,300 nits peak brightness. The colors are also more vivid on the display, and it’s also sharper, even though the Pixel 5 panel is nothing to scoff at. It’s a good display, which supports high refresh rates. It’s not as flashy as the OnePlus 9 Pro panel, and could be brighter, but not many people will have complaints. It’s worth noting that the viewing angles are excellent on both displays.

Is there a massive gap in terms of performance, considering the difference in specs and price? Well, no. Both of these phones perform admirably, despite the fact the OnePlus 9 Pro is much more powerful on paper. Don’t get me wrong, the OnePlus 9 Pro is faster when it comes to loading apps and whatnot, but the difference is not big, and the Pixel 5 is not laggy or anything of the sort. Both phones are quite smooth, and their high refresh rate displays do help make everything look nice and smooth as well.

The Google Pixel 5 includes the Snapdragon 765G SoC, which is a mid-range processor. The OnePlus 9 Pro, on the other hand, is equipped with the Snapdragon 888, the best SoC Qualcomm has to offer at the moment. The OnePlus 9 Pro also offers newer and faster RAM and storage, in case you were wondering. Both software offerings are well-optimized by the companies, even though they’re quite different in terms of what they offer.

When it comes to regular daily tasks such as opening / closing apps, multitasking, browsing, consuming multimedia, typing emails, taking images and videos, and so on, both of these phones shine. They both also do a good job when it comes to gaming, but the OnePlus 9 Pro offers way more features in that regard, and it’s also more future proof from the gaming perspective. That handset can also load games faster, if that’s something you care about.

The Google Pixel 5 includes a 4,080mAh battery, while the OnePlus 9 Pro comes with a 4,500mAh unit. The two phones have considerably different display sizes, resolutions, and refresh rates, so this difference is to be expected. Those are good battery sizes in both cases, that’s for sure, so the only question is, how well do the two phones perform when it comes to battery longevity / life?

As things are right now, at the time of writing this article, the Google Pixel 5 has a considerable advantage. The Pixel 5 was one of the major surprises when it comes to battery life, as the phone was able to cross the 7-hour screen-on-time mark comfortably in our testing. The phone even crossed 8 hours of screen-on-time at times, when needed. The OnePlus 9 Pro’s battery life is not particularly consistent at the moment, it can go up to 6 hours of screen on time, sometimes it can push a bit further than that, and on times, it barely reaches 5 hours of screen-on-time. This hardware is capable of much more than that, and OnePlus will hopefully optimize things soon.

The camera situation is… well, interesting. OnePlus has been hyping up the OnePlus 9 Pro cameras for weeks before the phone launched. The company partnered up with Hasselblad, so the expectations were high, even though Hasselblad was only involved in the color science this time around. That being said, the OnePlus 9 Pro does offer good camera performance, but not what we expected. It still doesn’t perform all that great in low light, while it has issues with blue hues in lower light as well, not to mention flaring from street lights, etc. That slight shutter delay is also an issue, at least at the time of writing this article. OnePlus has been releasing updates consistently since the phone got announced, four of them launched up to this point. 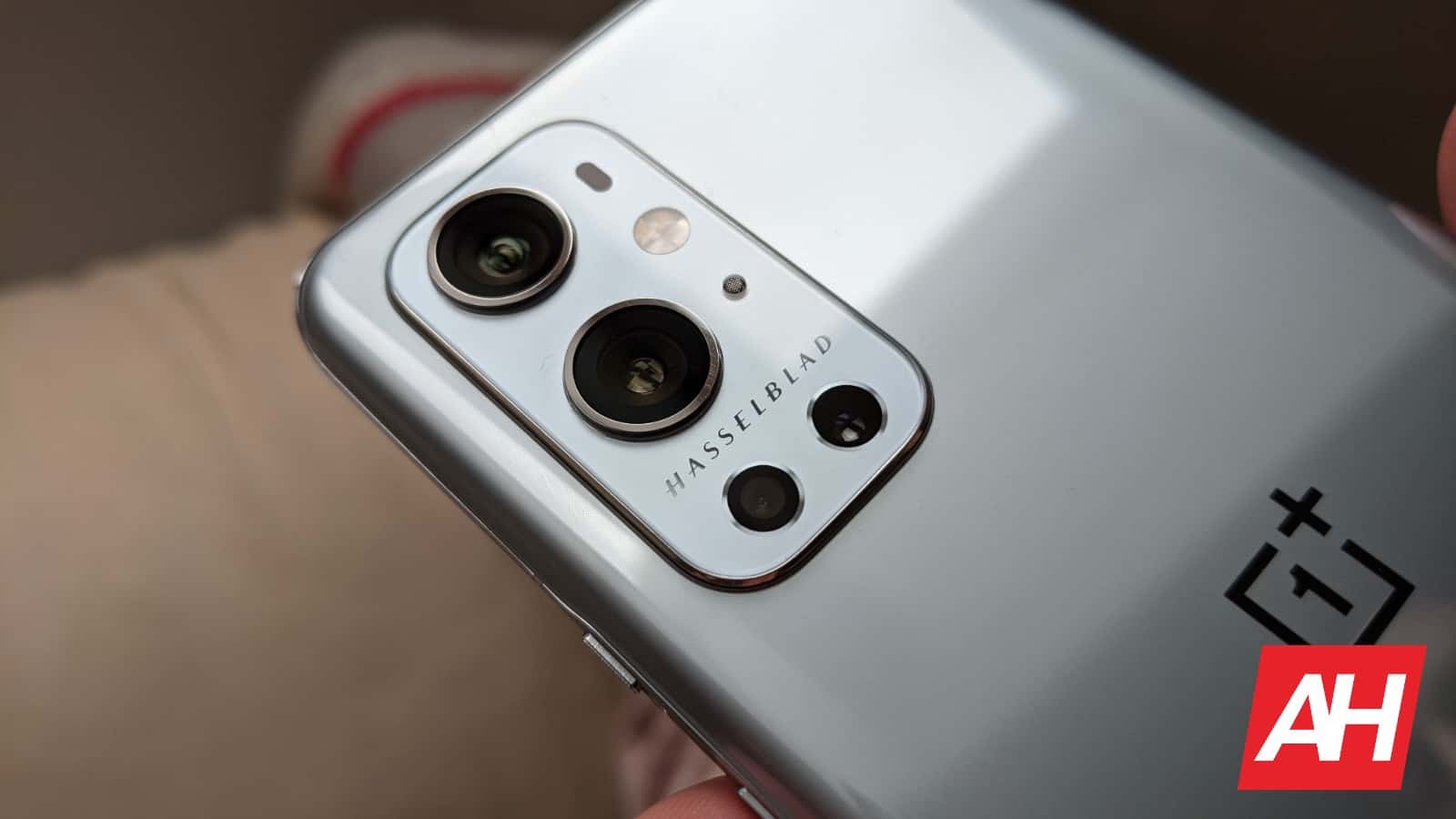 The Google Pixel 5, on the other hand, has a camera sensor that is quite old, as the company has been using it since the Pixel 2. Still, that camera sensor, with major help from Google’s camera software, does a great job. The Pixel 5 is still one of the best camera smartphones on the market, and it does great in low light as well. It is starting to show its age, but very few people will have complaints here, as the phone does a great job at balancing images in almost all lighting conditions. Its ultra-wide camera is also good, though that’s an area in which the OnePlus 9 Pro shines, ultra-wide camera performance, and macro photography.

Both of these smartphones are fairly good in regards to cameras, but until OnePlus fixes a number of issues with the 9 Pro camera, the Pixel 5 is more consistent across the board. OnePlus did include great hardware on the OnePlus 9 Pro camera, so all it needs is the right optimization to show its true power. Let’s hope the company will deliver that moving forward.

When audio is concerned, the OnePlus 9 Pro has the upper hand. That phone comes with two stereo speakers, which are actually quite good. They’re loud, and sharp. The bass is not the best, but that’s perfectly normal for smartphones these days. The distortion is barely noticeable at the highest of volumes, so that’s not something you should be worried about. The Pixel 5, on the other hand, well, Google made some odd choices.

The Pixel 5 comes with a bottom-firing main speaker, while the secondary speaker is placed below the display. That causes it to be a bit muted, and the sound is not as sharp or loud as it should be, for a stereo speaker setup. Luckily, the main speaker is quite good, so the sound is not that bad, but the OnePlus 9 Pro offers more in that regard. When you plug in a good set of headphones, both phones will deliver good sound across the spectrum. Do note that neither of them offer a 3.5mm headphone jack, though.