This article will be regularly updated with new information on the OnePlus 8 series (this is a preview article) — both official teasers and credible leaks, rumors, and insider claims — as it becomes available in the run-up to the release of the upcoming Android smartphone. The last update was made on April 7.

OnePlus will announce its new flagship smartphones on April 14. The company will announce two handsets, the OnePlus 8 and 8 Pro. Those phones will be announced during an online-online event this time around, due to health concerns caused by the pandemic. The event had been postponed three times, the company’s CEO revealed recently. That being said, the aforementioned April 14 date is official, so the launch will happen then.

The OnePlus 8 and 8 Pro did leak quite a few times thus far. We’ll do our best to include as much information here as we can, to give you the best possible idea as to what to expect. We will not include every single leak that surfaced, as some of them were quite repetitive. That being said, let’s see what the OnePlus 8 series will have to offer, it’s time to kick off this preview article.

They will be extremely similar when it comes to the design

Both of these phones will be made out of metal and glass, just like their predecessors. The OnePlus 8 and 8 Pro will include both curved back and front sides. A curved display will also be included on both phones, and the same goes for a display camera hole in the top-left corner. Bezels will be almost non-existent on the two devices. The rear camera setup will be centered, and those cameras will be vertically-aligned.

Speaking of which, those cameras on the back offer the easiest way of differentiating between the two devices. The OnePlus 8 Pro will include four cameras on the back, while the regular model will sport three of them. That camera module on the back will protrude, while a 3.5mm headphone jack will not be a part of the package. The OnePlus 8 Pro will also be a bit larger than the regular model, as it will include a larger display.

Both devices will be extremely slippery, which is definitely worth noting. Both phones surfaced in renders already, while Robert Downey Jr. was spotted holding the OnePlus 8 Pro in his hand. He is the company’s brand ambassador, so that’s not exactly surprising. It was also tipped that the OnePlus 8 Pro will be a bit lighter than its predecessor (the OnePlus 7 Pro). In any case, you can check out all of those images in the two galleries down below. 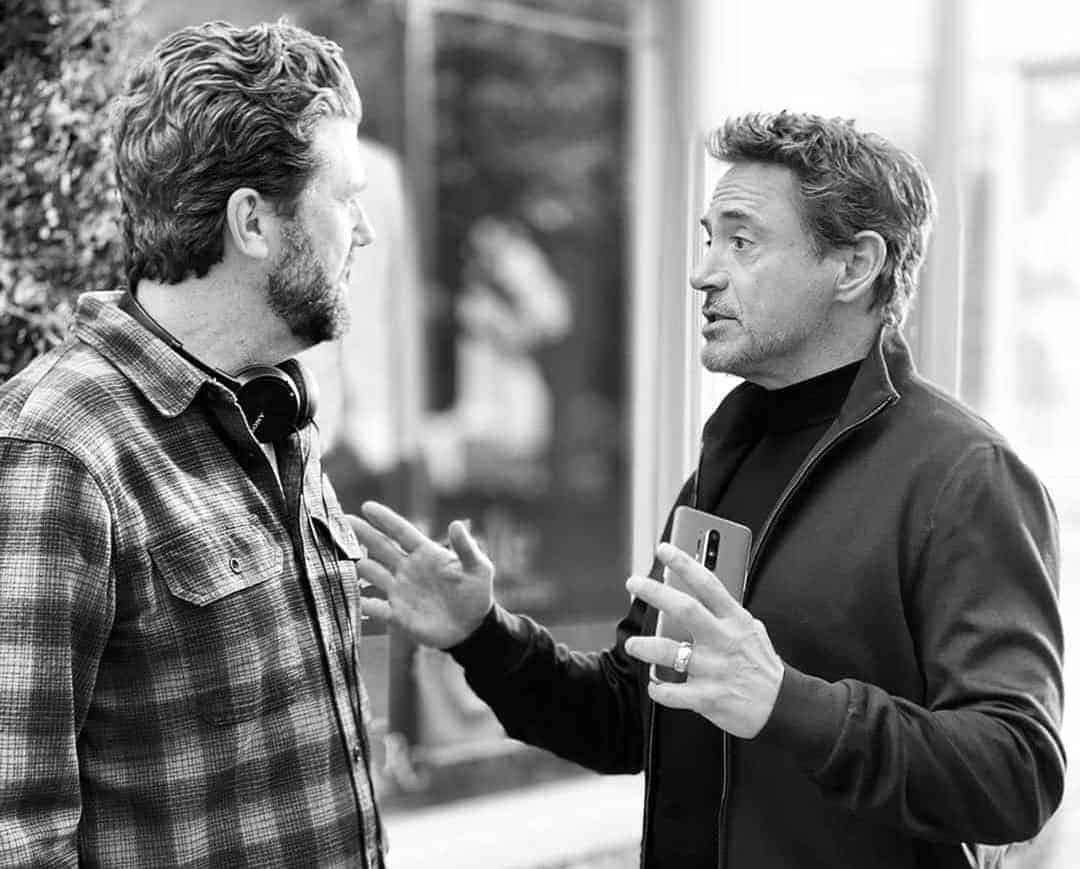 There’s not much to hide when it comes to the design of these two phones. In addition to all those images we’ve included in the two galleries above, we have something else two show you. The OnePlus 8 and 8 Pro surfaced in additional two renders, which show off the two phones from all sides. So, there’s literally nothing left to hide when it comes to their designs. The OnePlus 8 Pro appeared in Glacial Green, while the OnePlus 8 popped up in Onyx Black color here. Check out those two images down below

That display will also offer 240Hz touch sampling, and a 4,096-level automatic brightness adjustment. Now, Ishan Agarwal, a well-known tipster, offered more information regarding that display quite recently. He said that the display will support HDR10+ content with always on 10bit HDR. On top of that, it will feature a MEMC chip, which is essentially Frame Insertion Technology. So, as you can see, the two displays will not exactly be identical, even though both will offer high refresh rate.

The OnePlus 8 and 8 Pro are expected to include the same main camera. That will be a 48-megapixel camera, but not the one their predecessors featured. We’re looking at Sony’s new IM689 sensor here. That sensor is already used by OnePlus’ sister company, OPPO, and it’s actually really good. The OnePlus 8 Pro will also utilize the IMX586 sensor, but as its secondary sensors. That sensor will be used in an ultra-wide camera on this phone, while it was used as the main one on the OnePlus 7 and 7T series smartphones.

Both the OnePlus 8 and 8 Pro will be fueled by the same processor, the Snapdragon 865. That is a 64-bit octa-core processor from Qualcomm, and the best processor the company has to offer at the moment. It’s also one of the best chips in the mobile market at the moment. In addition to including the processor itself, OnePlus will also accompany it with the Snapdragon X55 modem. That modem will enable 5G connectivity on both devices.

OnePlus actually confirmed, quite recently, that both phones will support 5G. OnePlus is also planning to utilize LPDDR5 RAM inside the OnePlus 8 Pro. The OnePlus 8 is, unfortunately, expected to ship with LPDDR4X RAM. Both devices will include UFS 3.0 flash storage, though, at least according to leaks. It is a bit surprising OnePlus did not opt for UFS 3.1 here, though that may change by the time the two phones get announced.

The OnePlus 8 Pro will be the very first OnePlus-branded smartphone to offer wireless charging. It will also be the first device from the company that will have an official IP rating for water and dust resistance. In this case, we’re looking at IP68 certification. The device will support 30W wireless charging, in addition to Warp Charge 30T, which is OnePlus’ proprietary 30W fast wired charging. OnePlus is also expected to announce a 30W fast wireless charger alongside the OnePlus 8 series. That device will sport a 4,510mAh battery on the inside.

The OnePlus 8, on the other hand, will not support wireless charging. It will not even have an official IP rating, even though it will be splash resistant. The OnePlus 8 will offer the same 30W fast wired charging as its sibling, though. That handset will have a smaller battery than the ‘Pro’ model, as it will ship with a 4,300mAh battery. Battery packs on both phones will not be removable, of course.

These are the official OnePlus 8 & 8 Pro cases 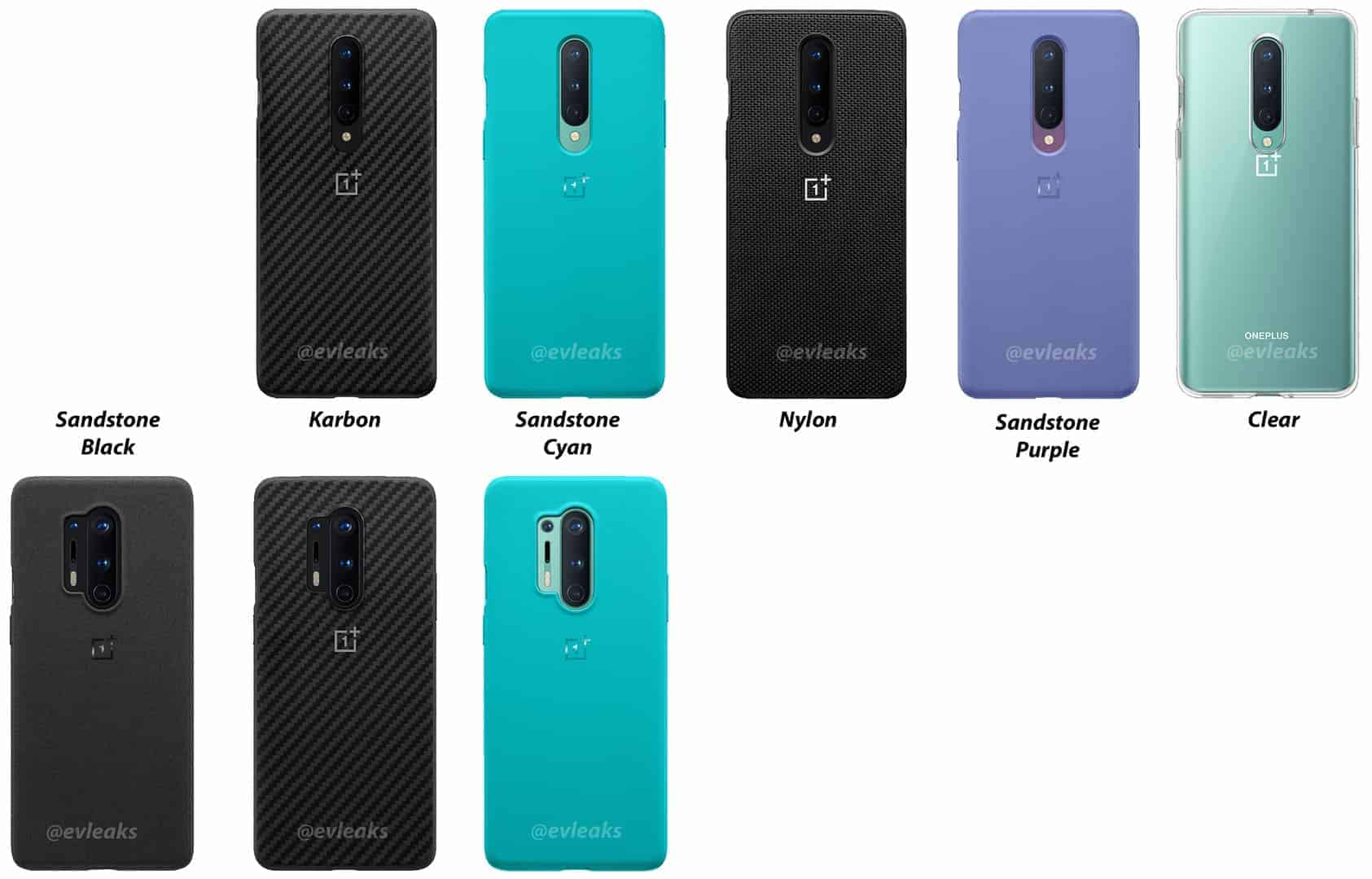 The Sandstone Black case will be exclusive to the OnePlus 8 Pro, it seems. The OnePlus 8 Pro cases will include a larger cutout on the back, as expected. The ‘Pro’ model will have an extra camera on the back, so that is expected. These are probably all the official cases that will be available for the two smartphones. There is a chance that some additional ones will be announced at launch, but that’s not as likely.

It seems like OnePlus is planning to announce quite a few accessories alongside its new flagships. In addition to cases for these phones, which are pictured above, various other gadgets are coming. The company will announce the OnePlus Bullets Wireless Z earphones. These will not be fully wireless earphones, but rather succeed Bullets Wireless 2 earphones. All of them leaked already along with some additional details.

The company's very first wireless charger surfaced as well. This will be a 30W wireless charging stand, in fact, and it will be released for the OnePlus 8 Pro. It seems like OnePlus will combine plastic and metal in its build, at least based on the leaked image. This charger is expected to utilize Qi charging, so it will probably support other phones as well, but we'll see.

In addition to those two gadgets, the company is also planning to release screen protectors for both phones, and also bumper cases. Screen protectors will be tempered glass protectors, based on the leaked images. As far as the bumper case is concerned, that will be a transparent case, made out of silicone. It seems like it will offer plenty of protection. That case may even come included in the box with both phones, that wouldn't surprise us.

5G will cause higher price tags

The OnePlus 8 and 8 Pro will be more expensive than their predecessors. OnePlus’ CEO did confirm as much during one of his interviews. He said that 5G is the main culprit for that, as expected. Now, the OnePlus 8 Pro will also be packed with high-end hardware, and whatnot, so that is playing its role as well. The addition of wireless charging and IP68 certification will definitely affect the price tag as well. We’re still hoping that OnePlus will be able to restrain price tags of these two phones, at least to a degree, as we really don’t want to make any assumptions. OnePlus' CEO pretty much confirmed that the OnePlus 8 series will cost less than $1,000, so that's at least some sort of confirmation we have thus far.