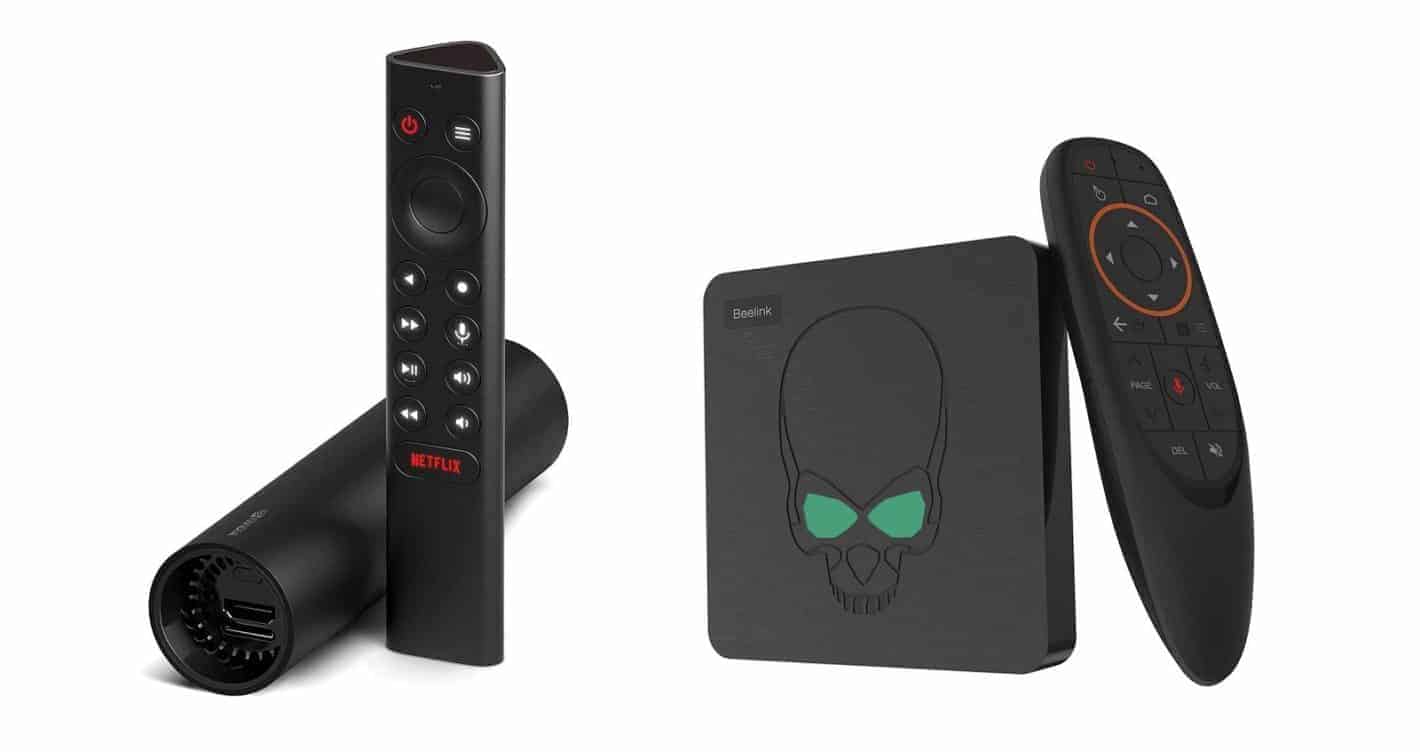 If you’re new to watching TV through an Android device, then it is important to understand the difference between official Android TV and TV boxes powered by Android.

You see, not all TV boxes powered by Android are equal. While some come running on a platform that’s been optimized for the TV, others don’t.

This might not seem like a huge difference at first, but it is. The way you engage with a device can impact the entire experience.

What is official Android TV?

Android TV is an actual product. It’s a Google product. Google first launched Android TV back in 2014 and since then it has been used by many companies to offer hardware devices directly to the public.

For example, you can not only buy players powered by Android TV, but also TVs with Android TV-built-in. Even more recently, Android TV has expanded to new product categories, such as soundbars. Yes, you can now buy a soundbar with a streaming device built-in.

Put simply, Android TV is a version of Android released by Google that’s been specifically designed to work on the TV. It is Android for the TV and devices carrying the official “Android TV” badge are Google certified devices.

Official Android TV also comes with a wealth of features that you might not get elsewhere. These include the dedicated Android TV home screen, Google Assistant built-in, picture-in-picture (PiP), to name a few.

What are TV boxes powered by Android?

TV boxes powered by Android are often referred to as “Android TV boxes” and this is where the confusion is.

The reason is TV boxes powered by Android run on a different version of Android then the one used on official Android TV products.

TV boxes powered by Android are also often referred to as “Kodi boxes.”

You may have read about these in the headlines.

What are the benefits of official Android TV?

The most obvious benefit of official Android TV is the user experience.

Google has optimized Android TV to run on the TV. This is an important distinction. An even easier way to understand the difference is that official Android TV is optimized for use with remote control presses.

This is in contrast to Android mobile and its emphasis on touches. For example, you tap on apps with Android mobile, but you press buttons on a remote for Android TV.

Due to this difference all the apps compatible with Android TV devices have to be optimized in the same way. These apps need to work with remote presses, and utilize an interface that’s easier to see and navigate from a distance. Unlike a smartphone were things can be smaller and just tapped on.

Another of the main benefits of official Android TV is the consistency of the product and experience. Regardless of whether you actually like Android TV or not, it is a highly consistent platform.

There are some deviations to this rule. For example, companies are able to do smaller tweaks, like what’s seen with the NVIDIA SHIELD. Then there are also operators who employ more of a while label version of Android TV and then impose their own interface on top of.

Regardless of these deviations, Android TV is consistent at its core.

What are the benefits of TV boxes powered by Android?

This is most obviously seen in the degree of apps that are available. Right now, Google claims there’s more than 5,000 apps available to download on the official Android TV.

While that’s a number suitable for most average users, it’s nothing compared to how many apps are available through the Google Play Store in general.

The freedom point extends well beyond apps as well. For example, device makers are also free to customize the experience to their liking. By the same token, so can the user, if they know what they are doing.

In contrast, you can buy a TV box powered by Android for really cheap. More to the point, you have a choice of products at the same cheap price point to select from.

What are the issues with Android TV?

As discussed in the last section, one of the major issues with Android TV is the level of app support. Now, this is a problem Google has been slowly remedying and app support has grown over the last few years considerably.

But that’s not the same as where the app support could and should be.

Another fairly major problem with Android TV is the updates. Android in general has always suffered a fragmentation issue and Android TV has followed in the same footsteps.

Some brands, like NVIDIA, are extremely good and reliable for regular updates, but others are less so. Buying an Android TV device with an expected level of frequent updates will depend highly on the brand you select.

Even if you opt for one of the more reliable brands, there’s still the issue of aging Android versions. Right now Android mobile is operating at an Android 10 level. In contrast, the newest Android TV devices launching currently run on Android 9 Pie.

Again, due to the updating situation, many existing Android TV devices are running much older versions.

Competing platforms such as tvOS, Fire TV and Roku OS do not suffer in the same respect.

What are the issues with TV boxes powered by Android?

There’s a few issues when it comes to TV boxes powered by Android.

The first is consistency and reliability. While the freedom offered by TV boxes powered by Android can be seen as a good thing, it can also be seen as a bad thing.

For example, interfaces can be more clunky and this can lead to a less than ideal TV experience. Likewise, while the level of available apps is greater than official Android TV, there’s no guarantee an app you download will have been optimized for Android TV.

So the reliability and consistency, and especially when it comes to navigation, not only extends to the interface, but also some apps as well.

Once again you are at the mercy of the device maker and considering these are sold as cheap products to begin with, there probably should not be a great expectation on future updates.

More to the point, as this is not an official Android TV you’re unlikely to get updates that add the same level of optimized functionality.

Compared to TV boxes powered by Android, there’s not a lot of choice when it comes to dedicated official Android TV devices.

Below you’ll find two of the most popular official Android TV players you can buy today.

Arguably, the NVIDIA SHIELD TV is the most poplar Android TV device around.

Either way, it is certainly the most powerful thanks to the use of the company’s own Tegra X1 SoC. The all-new NVIDIA SHIELD TV and SHIELD TV Pro utilize a newer + version of the Tegra X1.

This makes them even more powerful than previous models and capable of supporting new features, such as AI-enhanced upscaling.

This also happens to be one of the more expensive Android TV devices in circulation. Pricing currently starts at $149.99 in the U.S. with the price rising to $$199 if you want the Pro version.

The NVIDIA SHIELD TV is available to buy from various retailers including Amazon.

To find out more about the NVIDIA SHIELD TV, read our full review.

To be honest, the Xiaomi Mi Box is not in the same league as the SHIELD TV, but then again, it’s not designed to be.

Instead, the Xiaomi Mi Box is designed as an affordable 4K streaming device.

To put the price gulf into perspective, while the SHIELD TV starts at $150, the Mi Box S is priced around $60. This inevitably makes the Mi Box a more accessible device to more people.

You can pick the Xiaomi Mi Box S up from a number of online retailers including Amazon.

To find our more about the Xiaomi Mi Box S, read our full review.

When it comes to TV boxes powered by Android TV, there’s a lot to choose from. There’s also no absolute ranking when it comes to which devices are the best. This is probably a result of the wide selection and how varied the user experience and features can be.

For example, below is just two examples of popular TV boxes powered by Android. One at a higher price point, and one at the lower end.

Almost immediately, it is clear to see just how different a TV box powered by Android TV can be. TV box makers sometimes go out of their way to make their’s look different and the Beelink GT King is no exception.

Besides the design, this is also a fairly high spec TV box compared to official Android TV. For example, with the Beelink GT King you get 4GB RAM and 64GB storage. Those figures even put the new SHIELD TV to shame. Although the processor in use here is the Amlogic S922X. The use of Amlogic processors in TV boxes powered by Android is fairly common.

Some of the additional features include Android 9 Pie, a voice-activated remote, 4K at 60fps and Bluetooth 4.1.

TheÂ Beelink GT King currently costs around $125 and can be picked up from a number of retailers including Amazon.

While the Beelink GT King is a fairly expensive device, that’s not to say you have to spend over $100 on a TV box powered by Android. In fact, most are priced well below $100 and this includes the H96 MAX.

In spite of the considerably lower price, the H96 MAX is another device that comes packing the specs. For example, you once again are looking at 4GB RAM, 64GB storage and Android 9 Pie. Good luck finding those specs on an official Android TV device, let alone one that you can currently buy for around $50.

The H96 MAX is available to buy from a number of online retailers including Amazon.

If you came here looking for a definitive answer on which is the better solution for you, that’s a decision you’ll have to make on your own.

The truth is, both have their distinct benefits and also their own selection of problems.

However, you are limiting yourself in terms of the apps you can download, and the things you can do with a device.

In contrast, if you want the ultimate freedom that Android offers, and the option to do what you want with a device, then TV boxes powered by Android are likely to be the better option for you.

That is, as long as you don’t mind a less visually attractive interface or some user experience obstacles along the way.