Even if you already own a Switch or Switch Lite, a case could be made for upgrading to the new OLED model. Having said that, Nintendo is clearly targeting new customers more than existing owners. Some people feel that the improvements made aren’t worth paying the money to “switch” their old system out for the new one, or even add to the family.

But for anyone that doesn’t already own a Switch and wants one, the OLED model is clearly the way to go. That’s why we’ve decided to put together this handy guide that encapsulates everything you need to know about the Nintendo Switch OLED. Should you be considering getting one, check out all the details about it below.

What is the Nintendo Switch OLED?

The Nintendo Switch OLED is the newest model of the Switch family. It’s Nintendo’s newest video game console that can be played in three different ways. Either as a handheld portable, on a tabletop, or sat in the dock and connected to a TV for a more lean-back experience. It comes complete with a handful of improvements over the original model too.

It’s still very much like the original model, as it plays all the same games. However, there are some unique visual differences. As well as a few smaller updates that will refresh the system and just make it better.

How much does the Nintendo Switch OLED cost?

The Nintendo Switch OLED will cost $349.99 at retail. As long as you can find it in stock at official retailers like GameStop, Amazon, Best Buy, and others, you should always be able to get it for the right price. There is always a chance though that it will end up costing more if stock is snatched up by resellers.

Eventually you’re also bound to see Nintendo release the Switch OLED in bundles that come with extras. Like games, memory cards, and more.

When is the Nintendo Switch OLED available?

Nintendo is releasing the Switch OLED later this year. Specifically on October 8. It is currently available for pre-order at numerous retail partners, including the ones mentioned above, alongside Target. Although, most or all retailers are listed as out of stock online. So your only option right now might be to try and pre-order it at a local retailer.

Stock may also have a better chance of filling back up the closer it gets to the release date. So if you really want a Nintendo Switch OLED model, keep your eyes peeled for stock refreshes.

Where is the Nintendo Switch OLED releasing?

Nintendo will launch the OLED model worldwide on the same date. That means you will be able to get it in all major regions including the US, UK, Europe, Latin America, Canada, Japan, Southeast Asia etc. If the regular Switch is available in your region, then the OLED model should be as well.

What are the new features? The biggest new feature, or at least the one that most people will notice first, is that the console now comes with an OLED screen. The screen is also a tiny bit bigger, though not by much.

Aside from the new OLED screen, there’s also now a larger kickstand on the back. On the original Switch, the kickstand was a small piece off to the back left corner that you could prop up. It held the console up just fine, but there were concerns about how fragile it might be.

The dock now supports wired LAN too. So instead of relying on a Wi-Fi connection, you can choose to hardwire the console to your home internet when it’s sitting in the dock. For online play, this will be much more reliable for connectivity and it should ensure much faster downloads for games and other content.

You also now get 64GB of internal storage, enhanced audio, and it comes in a new color.

Are all existing games compatible?

Yes. All existing games are compatible. Since this is essentially the same console just with a handful of updated components and new features. That means you can link your Nintendo account to it and re-download any games you’ve purchased on the game’s now larger internal storage.

You can also slot in all of your existing Switch game cards, or any new ones that you pick up that were released for the regular Switch. Just like the original Switch, you can enjoy your games in three different modes. TV mode, Handheld mode, and Tabletop mode.

In TV mode, you’ll set the Switch OLED in the dock like shown in the picture above. While connecting the console to your TV through HDMI. You then use the Joy-Con with the included controller grip to control your games. In this mode, you can also connect the Switch OLED to the internet using the wired LAN port on the dock. You can still connect it to Wi-Fi if you want or need to. But the LAN port is there if you want a more reliable connection. And because it’s hardwired you will probably get faster download speeds.

With handheld mode, you can detach the Joy-Con from the controller grip and hook them onto the sides of the Switch OLED display. Letting you play your games on the go in one neat and tidy portable console. In this mode the Switch OLED is now battery operated, so it will need to be charged from time to time.

Tabletop mode allows you to disconnect the Switch OLED from the dock, prop out the kickstand, and set it on a flat surface where you can play the Switch without having to hold it. You can play games this way solo, or with a friend. With each of you using your own Joy-Con controller.

This is a great mode for when you’re traveling but might not want to hold the console. Furthermore, this also makes it really easy to watch movies using Hulu.

What are the details of the new screen?

The new screen is using an OLED panel and is 7-inches, giving you more screen space for your favorite games. Because the console now uses an OLED panel, you’ll get richer, more vibrant colors and deeper blacks.

Which should provide you with an overall better visual experience. The display is also a multi-touch capacitive touchscreen, with a resolution of 1280 x 720p. That’s compared to the 6.2-inch display on the regular Switch that uses an LCD panel and has the same resolution.

What is the battery life of the Nintendo Switch OLED model?

According to Nintendo, the battery life on the Switch OLED model should stay the same as the regular Switch. That means you will get anywhere from 4.5 hours to 9 hours of battery life on a single charge.

This of course can vary based on a number of different factors. If you turn up the screen brightness, then that will impact the battery life. You could also impact it with the game you’re playing, whether you’re using Wi-Fi, and adjusting volume.

Also worth noting is that normally, the use of an OLED panel would probably help the battery life. But because the screen on this model is larger, things should pretty much even out. Still, 4.5 hours to 9 hours of battery life is pretty good. And if you’re going to sit down for a longer session than 9 hours, there’s nothing wrong with a little break to charge it back up before diving back in.

Are the Joy-Con controllers different? No. Nintendo has confirmed that the Joy-Con controllers which come with the new Switch OLED model are the same as the ones that come with the regular model. The only difference is the color, which is currently only offered with the OLED model.

But, you can use those Joy-Con controllers with the older Switch too. There are no changes to any of the buttons or other features.

What about the dock? 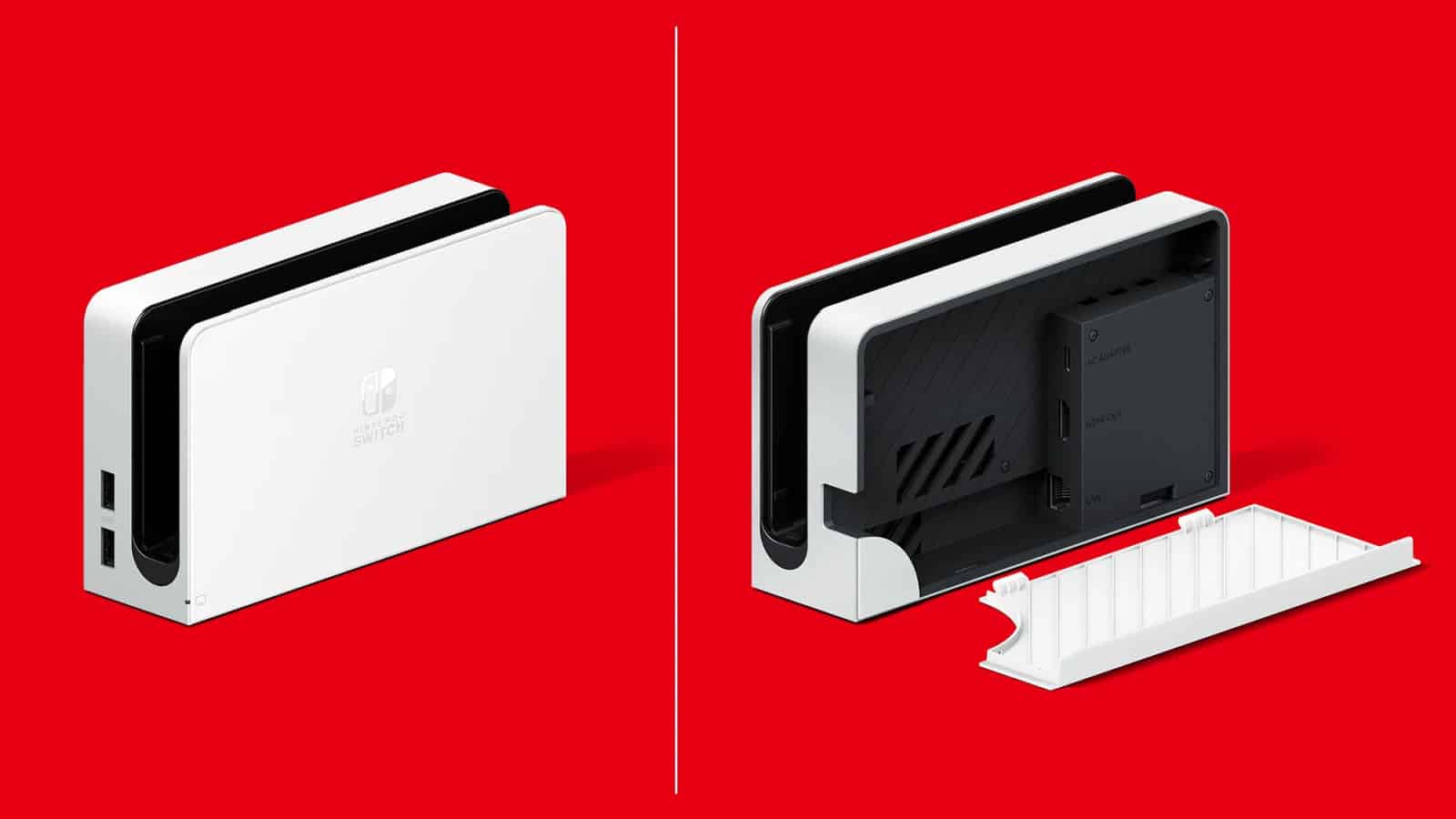 The dock is a little different from before because of the added LAN port. There are a couple of other changes, too. When you take off the back door of the dock you’ll notice a slightly different design on the inside of the dock. With a series of diagonal lines going across the inside area next to the ports. Nintendo has also removed the USB port that was on the inside, and has replaced it with the LAN port.

The HDMI and AC adaptor ports are still there. And you can still find two USB ports on the outside of the dock as before. And of course, the color of the dock is white.

What are the tech specs of the Nintendo Switch OLED model? 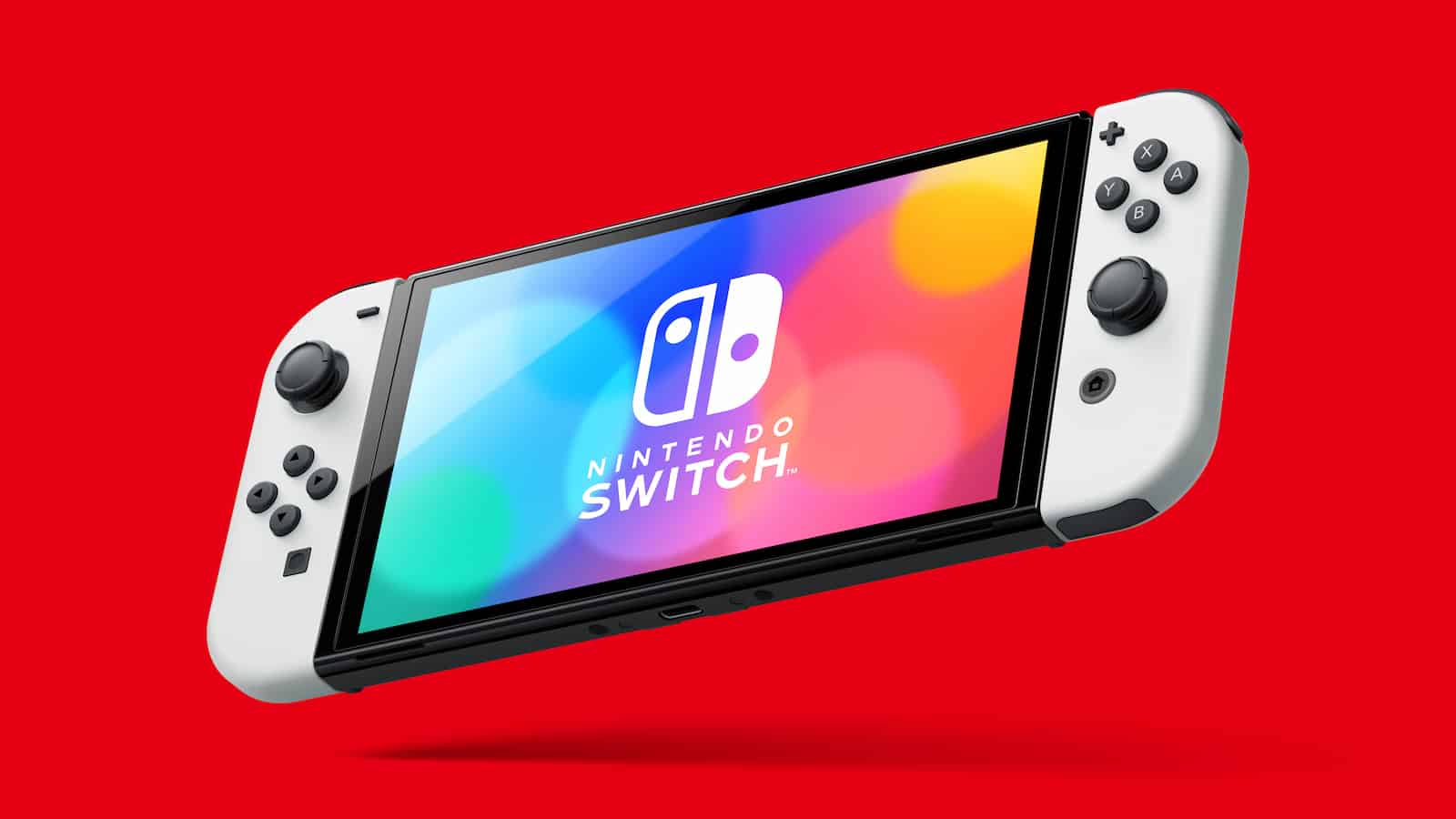 The Nintendo Switch OLED model is not hugely different from the regular model when it comes to specifications. But there are enough differences to make them worth listing. And it’ll be a good reference point for first-time Switch owners who don’t already know them. You can see the full list of specifications below.

Where can you pre-order the Nintendo Switch OLED model?

You can pre-order it from all major retailers, and when it launches on October 8 you should be able to buy it locally at those same retailers as long as it’s in stock. Major retailers include Best Buy, Target, GameStop, Amazon, and Walmart. Meanwhile you can also find it at a variety of smaller retailers like B&H Photo, and Adorama. And likely others. You can find links to all of them from the button below.