But where Marvel’s Spider-Man 2 had a significantly longer trailer, the Marvel’s Wolverine trailer was fairly short. And had little more to show off than a brief scene that confirmed what the game was. No voice acting other than the song playing in the background. No potential hints at the plot or who the other characters are.

Spider-Man 2 on the other hand, had some information that might have been easy to miss. So we’re breaking everything down here in this guide. If you want to learn more about the game, this guide is here to help. Since the game is also likely still in the early stages of development, there’s a lot that’s still unknown. Having said that, we’ll update this post as more information about the game comes out.

What is Marvel’s Spider-Man 2? 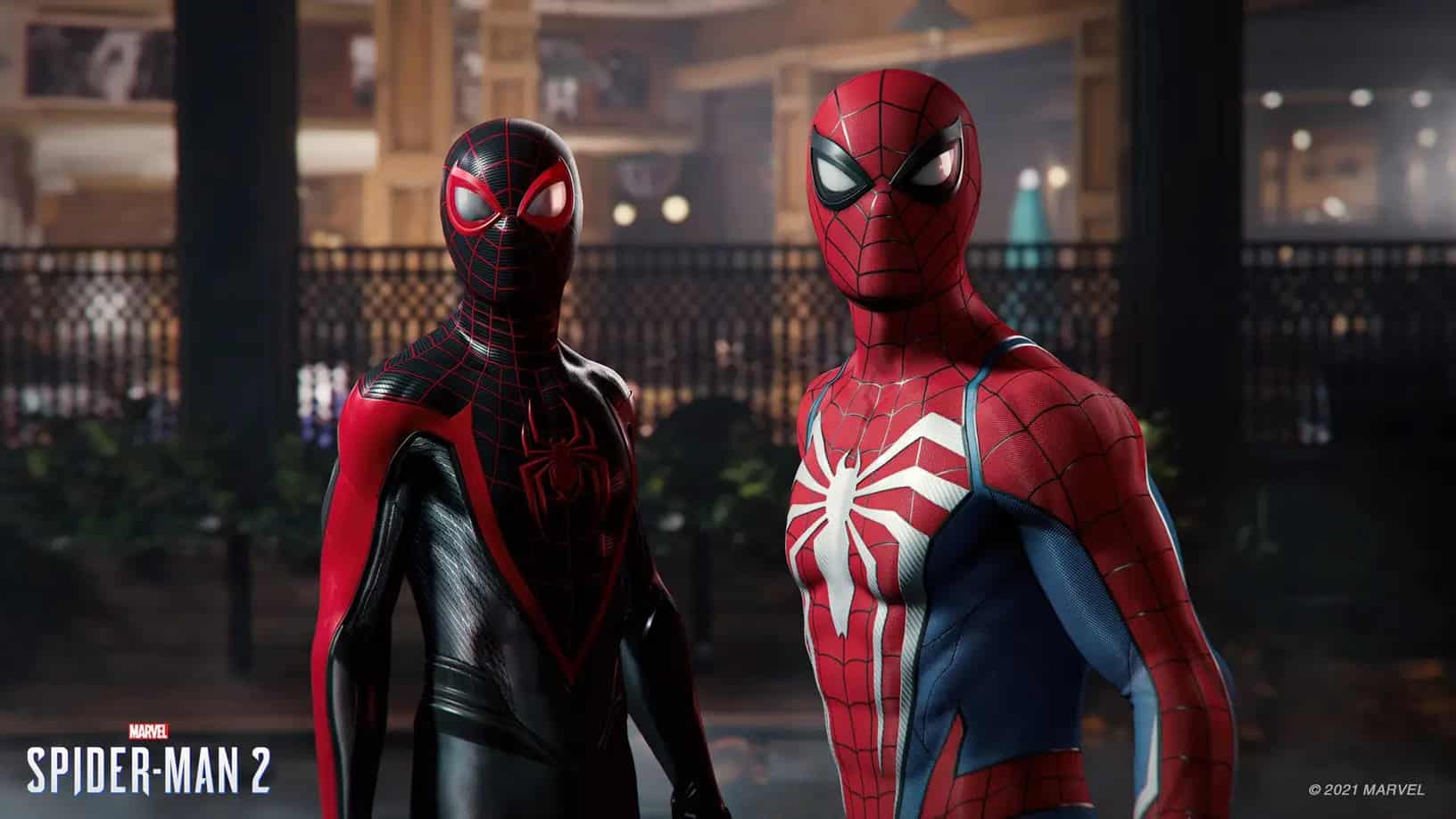 Marvel’s Spider-Man 2 is the third installment in the Spider-Man series from Insomniac Games. Both Peter Parker’s Spider-Man and Miles Morales’s Spider-Man will make their way into the game to some degree. In the trailer both heroes are fighting side by side.

But that doesn’t necessarily mean that both will playable characters. Or that both of them will be present throughout the entirety of the game.

Keep in mind that this is so far just a rumor and nothing has been confirmed.

Who are the main antagonists? 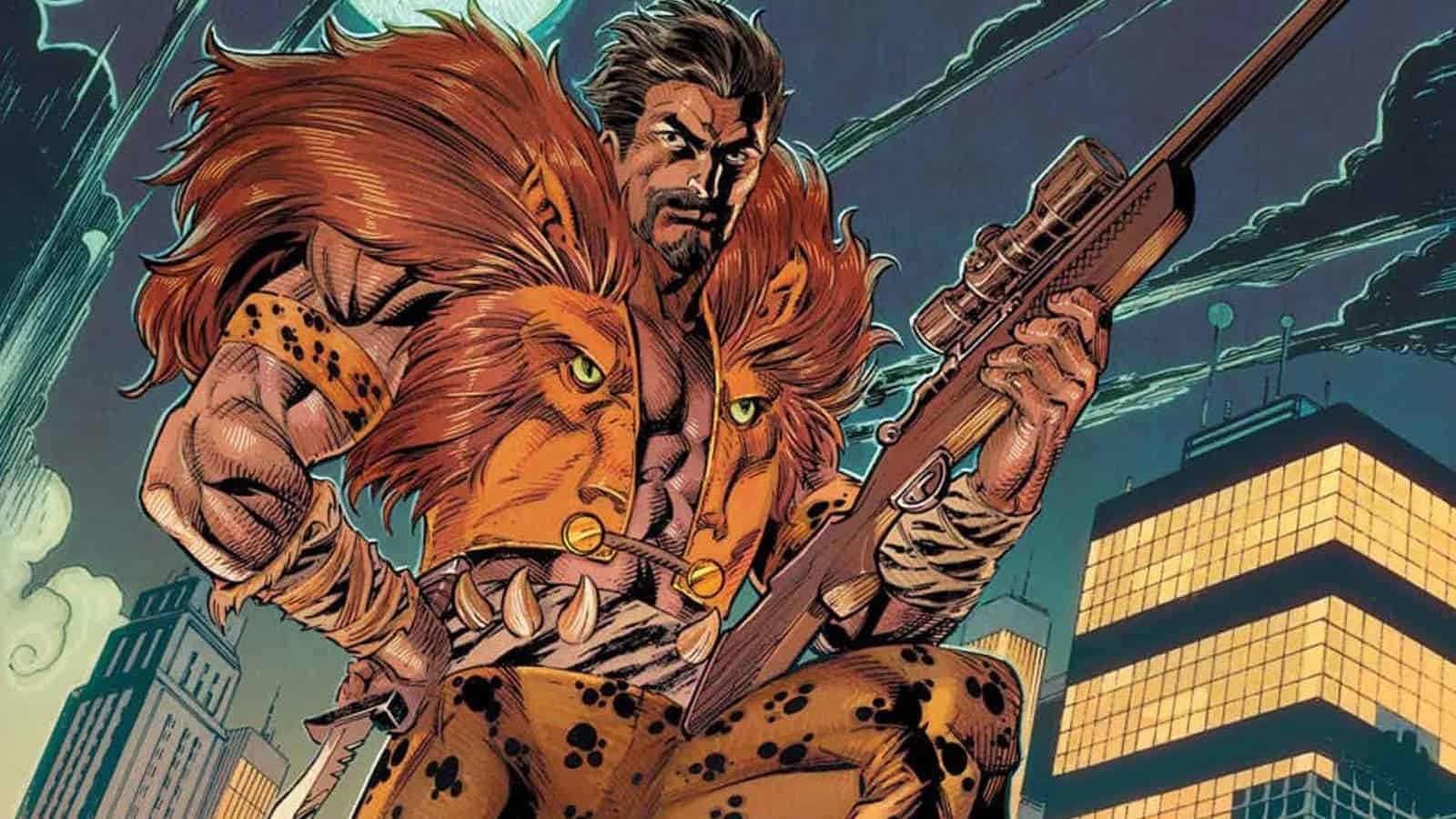 It’s unclear who the main antagonists are but the trailer does confirm that there are at least two major villains in the game. Throughout the entire trailer you hear the voice of one of them. While the other shows up briefly at the end. The latter obviously refers to Venom. Which you can see in the main image for this post.

Though, it’s also unclear how much of a “villain” role Venom plays in the upcoming game. He’s a potential threat to Peter and Miles. But he could also be more of anti-hero here.

What about the second villain? While the character is never shown or named, the hints make it pretty obvious if you know your Spider-Man lore. The thick Russian accent. The obsession with finding an equal in battle. These are traits of Sergei Kravenoff or better known as Kraven The Hunter. Who seems to be narrating the trailer.

Also worth noting is that with Kraven almost certainly being a villain in this game (more than likely the main villain), there’s a chance that villains related to Kraven will show up too. For now, only Kraven and Venom seem to be present. But there’s plenty of room (and time) for Insomniac to introduce more.

A new set of leaks suggests that Lizard and Mysterio will appear in the game as additional villains.

Will there be more villains and heroes?

It’s quite possible. Both previous Spider-Man games have had a sizeable cast of heroes and villains. So there’s a good chance that Insomniac isn’t deviating from this path. In the beginning of the trailer, you see both Peter and Miles fighting a group of armed enemies.

The footage doesn’t make it clear who these enemies are. So they could be related to Kraven or a completely different enemy. As for heroes, there aren’t any major hints about who else might show up. But players should definitely expect some noteworthy appearances.

In what capacity remains to be seen. Will they be playable? Will they strictly be cameos or part of the plot? Anything is possible at this point.

When is Marvel’s Spider-Man 2 releasing?

At the moment there is no confirmed release date set for the game. But there is a tentative release date of sometime in 2023. So we’re looking at around 2 years at the very least, assuming development goes smoothly and there are no snags that cause the game to be delayed.

Having said that, delays have been very common these past two years. Cyberpunk 2077 was delayed multiple times before its release earlier this year. And most recently, Battlefield 2042 was delayed by a month to November 19. This doesn’t mean that there will be any delays of Marvel’s Spider-Man 2. Especially if Insomniac refrains from mentioning any exact dates. As that would give it plenty of time to make sure everything is in order before committing to a hard timeline.

Earlier this week, Insomniac gave a very brief update as to the game’s current development status in response to a question about the game: “It’s being made.” 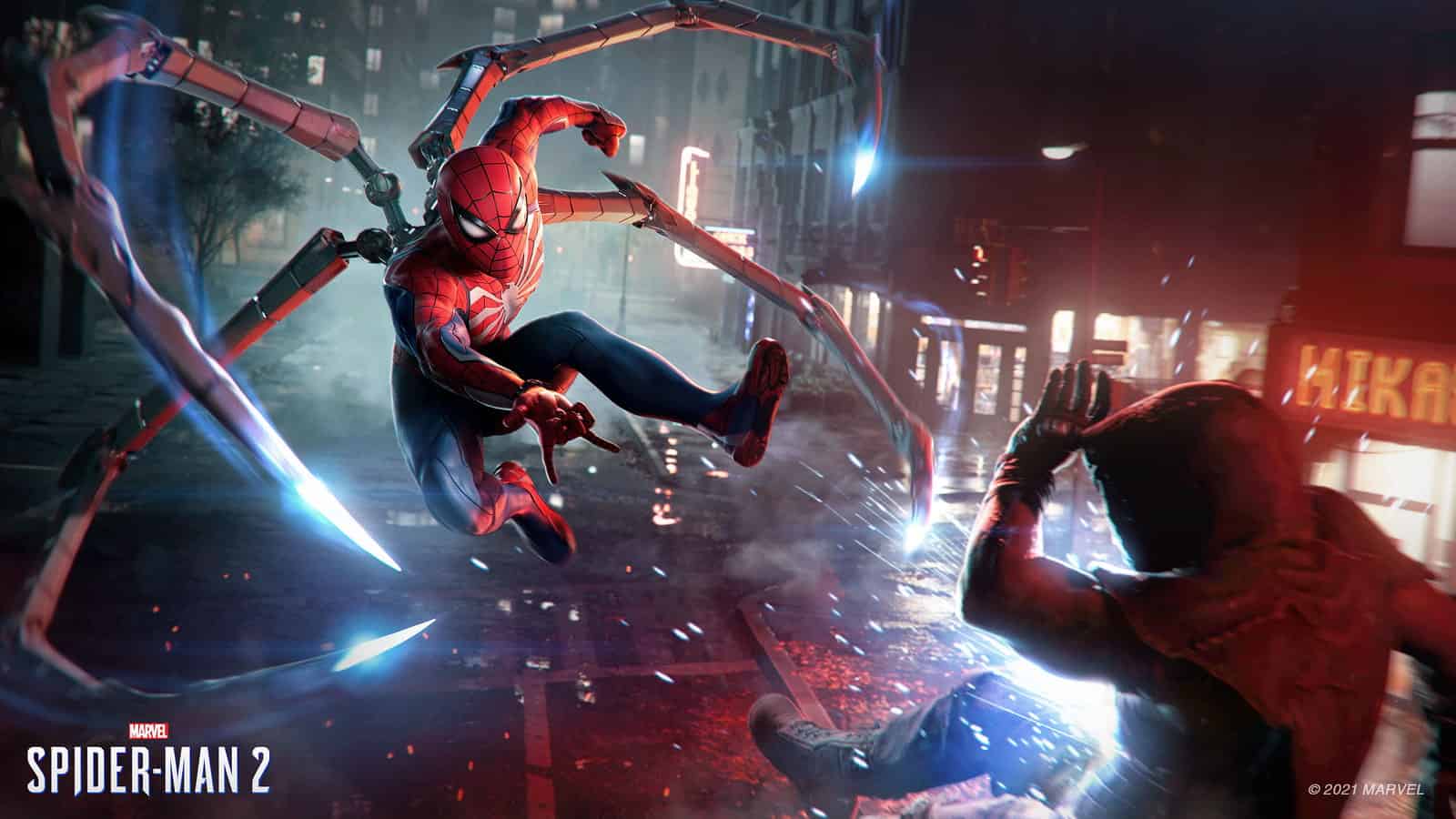 Marvel’s Spider-Man 2 will be an action game just like the other two entries. It isn’t confirmed that it will be as open-world as the first two in the series. But there’s really no reason to suggest that Insomniac would change this aspect for the upcoming game. Seeing as how popular that factor of the other two games were.

That being said, in addition to action gameplay, expect the combat to be similar, if not the same with new abilities, upgrades and more. The ever-popular photo mode should make a return too. Allowing players to capture even more stunning shots from around New York City featuring your friendly neighborhood Spider-Man.

In the trailer, and in the image above, Peter Parker’s Spider-Man can be seen in an upgraded version of the same suit from the first game that has some more advanced mechanical spider legs. This suggests there should be no shortage of gadgets for players to use when disposing of enemies.

Will there be new suits to unlock?

As noted, it was a very big feature in both previous games. And despite how fun the games were and how large of a world they allowed players to explore, a massive part of the replayability came from unlocking new suits to use. So players should expect to see plenty of suits in this new game too.

It’s unclear however how many of them would be entirely new, or coming back from the two previous titles. However, Insomniac has said that the suits featured in the trailer is merely a glimpse at suits the two heroes will wear in this new story.

It hasn’t been confirmed, but it seems that this will be another single-player action-adventure game. In a blog post from Insomniac’s Ryan Schneider over on the PlayStation Blog on September 9, Schneider states that Marvel’s Spider-Man 2 will feature Peter Parker and Miles Morales in “their most epic single-player adventure yet.”

Now since this doesn’t say anything about the potential of co-op, or the lack thereof, its possible that co-op could be available as a mode separate from the single-player experience. Especially if both Peter Parker and Miles Morales are playable characters. Not to mention the possibility of Venom being playable as well.

While we don’t know for certain if there will be more than one playable character, if there are it would make for a good co-op experience. But, don’t get your hopes up. It’s fun to think about the possibilities, but Schneider did say the game was a single-player adventure. So we know that the game is at the very least, single-player in some capacity.

Will the game be exclusive to the PlayStation platform? 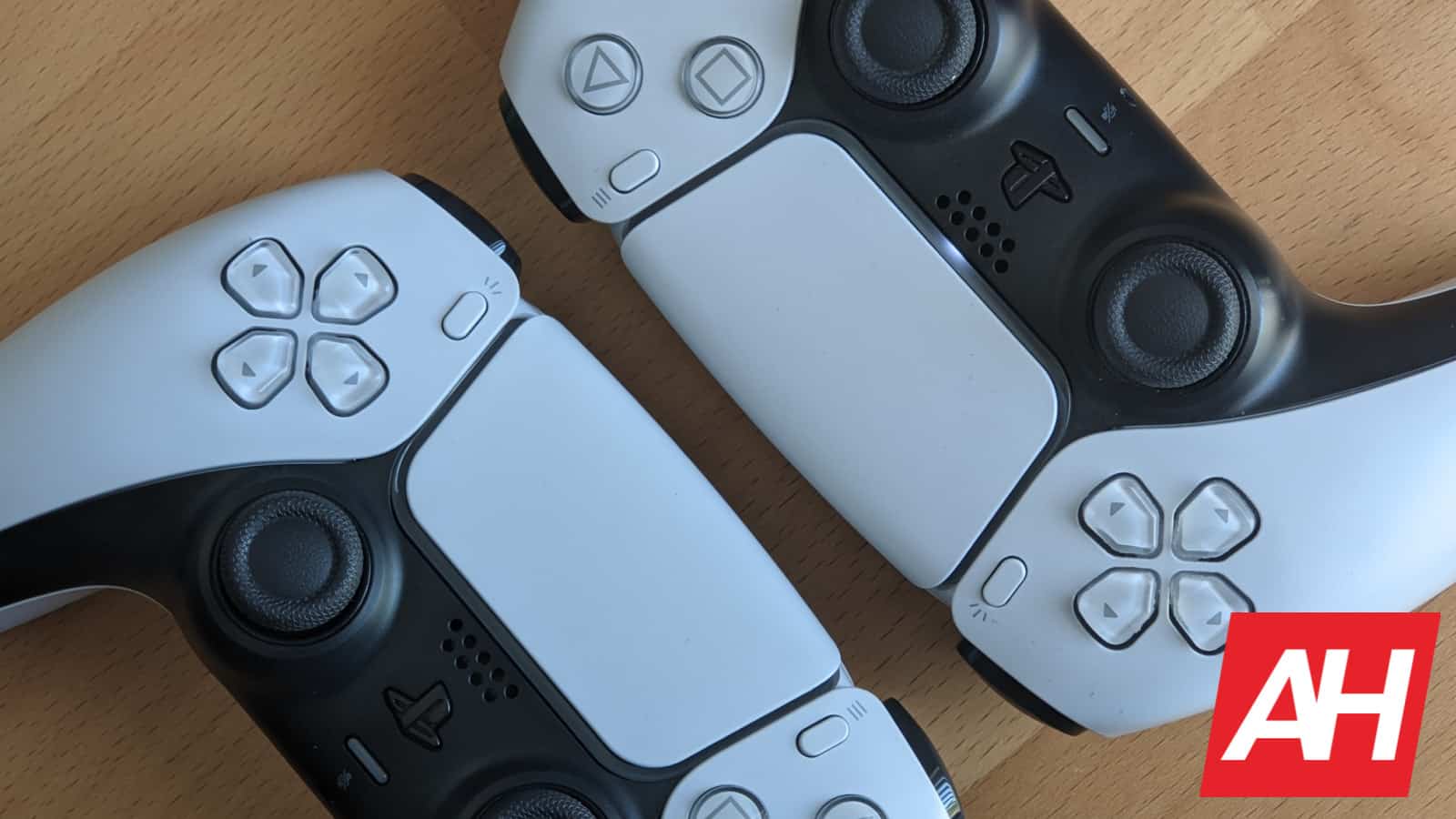 The game isn’t expected to come out until 2023. Potentially late 2023 at that. So that leaves a lot of time for things to change, and Insomniac to make a decision to bring the game to PS4 and/or PS4 Pro. But based on what’s been said, Insomniac for now seems to have decided that this is in development for PS5 only.

Will Marvel’s Spider-Man 2 and Marvel’s Wolverine be in the same universe?

What is clear is that Marvel’s Wolverine is a standalone game. And it’s set in an original universe. We just don’t know whether or not that universe includes Insomniac’s Spider-Man.

One thing worth pointing out though is that Marvel’s Wolverine seems to very much be set in Madripoor. A fictional country from Marvel Comics set in Southeast Asia. While there isn’t much to pick out of the trailer, as the camera begins to zoom in on Wolverine from the back, you can see a few hints on the wall behind the bar.

You can see a poster on the wall that spells out most of the name of Madripoor. And a fair amount of the décor in the bar has Southeast Asian design. Finally, the most telling bit of evidence is the bar chalk board that lists off drink specials. On this you can see the name of the establishment – The Princess Bar.

In Marvel Comics, The Princess Bar is a bar located in the Lowtown district of Madripoor. Also in the comics, Wolverine makes an appearance in Madripoor under a new identity, “Patch,” where he attempted to deal with the criminal activity in the region. He even briefly co-owned The Princess Bar.

Taking these things into consideration, it’s possible that Marvel’s Wolverine may have its very own universe separate from the one that houses all three Spider-Man games. Or at the very least it’s set in an entirely different location.

It’s a pretty safe bet that the answer is yes. The trailer shows off New York City architecture and you even see street signs with names for streets that are actual streets in New York City. Goodman and Greenwich. Spider-Man is a New York City-based super hero after all. And both previous took place in NYC.

Of course that doesn’t mean we won’t see Peter and Miles make their way out of New York at some point. But don’t be surprised if the entire games stays within the city limits again.