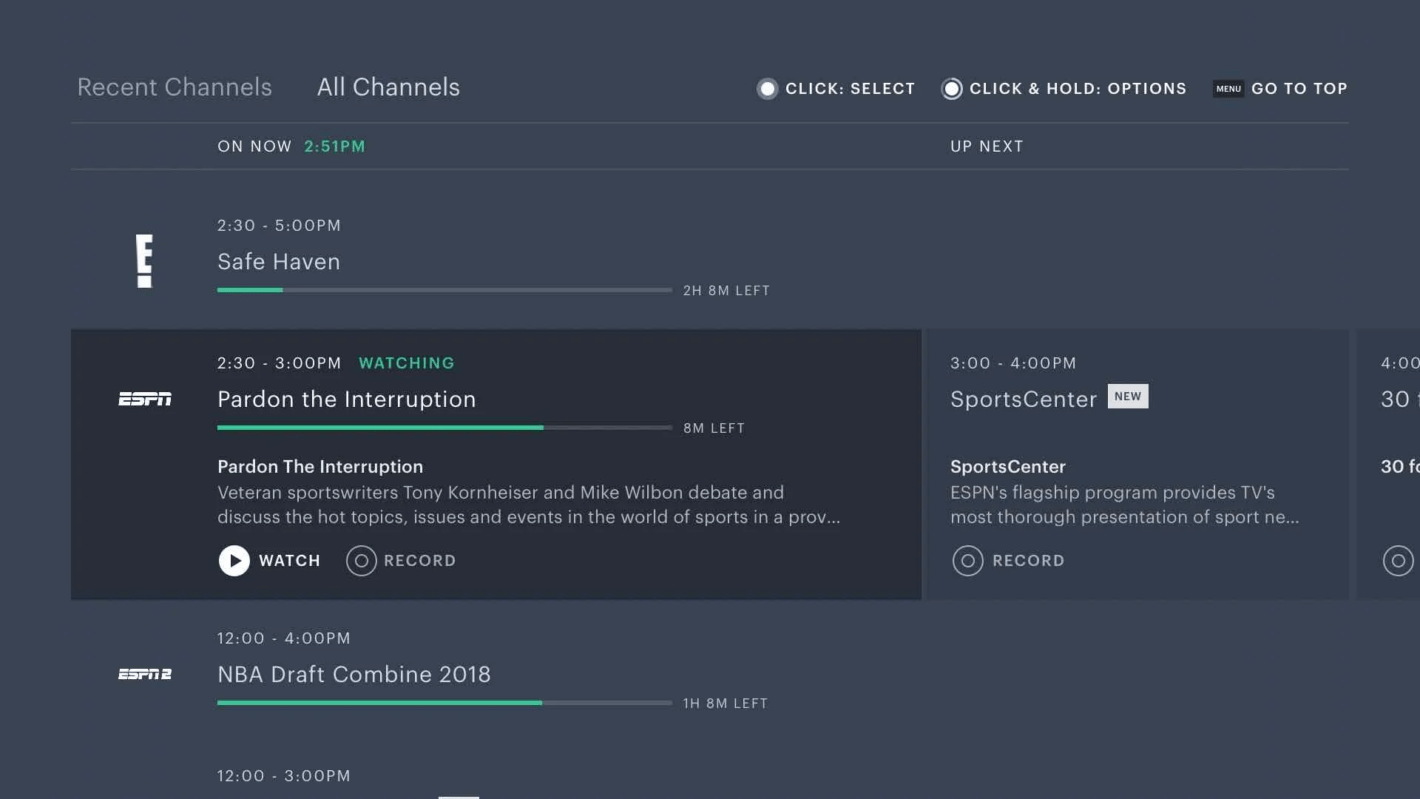 Hulu has been around for many years, but what’s new is the + Live TV portion of the service. Hulu + Live TV is the company’s streaming Live TV service, it offers over 65 channels for only $69.99 per month.

Much like YouTube TV, Hulu + Live TV was designed as a way for users to cut the cord from traditional cable companies, but still be able to watch their favorite shows on cable TV. The Live TV streaming service is in addition to the Hulu library, which has grown to be quite large over the last decade or so. Which arguably makes it one of the better options out there for streaming TV.

What is Hulu + Live TV

Hulu + Live TV is exactly what it sounds. It’s Hulu, along with the streaming Live TV service that we all want.

The service was announced in May 2016. Launching in Beta on May 3, 2017, originally called “Hulu with Live TV” then changed to “Hulu + Live TV”. At launch, it came with 50 channels  for users to stream, and included five OTA channels – ABC, CBS, NBC, Fox and The CW – for most markets.

Initially it was priced at $39.99, making it very competitive with YouTube TV at the time, which was $35. In December 2019, Hulu upped the price to $54.99 per month. This was after it continued to add more channels. Hulu raised prices in December 2020 to $64.99 per month. And again in December 2021 to $69.99. This latest price increase was to bundle in Disney+ and ESPN+. Making it a really good option, and technically a price decrease.

Hulu + Live TV has just under three million subscribers, according to the latest estimates. Which puts it at the second-biggest streaming Live TV service in the country.

How much does Hulu + Live TV Cost?

Hulu + Live TV costs you $69.99 per month currently, for the base subscription. This comes with all of the channels listed below (current count is around 75). It also includes the entire Hulu on-demand library, which has over 10,000 titles. Mostly from networks owned by Disney, NBCUniversal and some from ViacomCBS. Essentially, you get the ad-supported version of Hulu included with the Live TV service.

For that price, you are also getting the full Disney bundle. So for $70/month, you’re getting Hulu, Hulu + Live TV, Disney+ and ESPN+.

What Add-ons are available?

There are plenty of options available with Hulu + Live TV, and plenty of ways to add more content to your Hulu subscription. But it can get expensive pretty quick.

Can I bundle it with Disney+

Disney used to allow you to bundle Disney+ and ESPN+ with Hulu + Live TV. But as of December 21, 2021, they are automatically bundled in Hulu + Live TV for $70 per month.

This move was done in a way to streamline the different plans that Disney has for its different streaming services. Remember that Disney has a majority-ownership in Hulu. Comcast owns a small sliver of the service, along with a few other companies. Disney owns around 60% of Hulu.

As of December 2021, Hulu + Live TV has 75 channels available in its base subscription plan. They are listed below.

What premium channels are available?

Hulu + Live TV does allow you to subscribe to a few premium channels within your subscription as well. These include STARZ, SHOWTIME, Cinemax and HBO MAX. These can also be subscribed to independently, but subscribing through Hulu, makes it easier to pause or unsubscribe completely. These also work with TV logins. Just look for the option to login with Hulu Live TV in each of these premium network apps, and you’ll be good to go.

Hulu + Live TV can be watched in the browser on your laptop or desktop computer. As well as on most devices that have regular Hulu available.

Currently, you can watch Hulu + Live TV on Chromecast with Google TV, but it does integrate with the “Live” tab on Google TV yet. That is reserved for YouTube TV only right now.

So it is available on virtually every platform that you can think of. Allowing you to watch TV virtually anywhere.

What features are included?

Hulu + Live TV is not quite as feature-rich as some of the other streaming Live TV services on the market. But it does have a few features that help to set it apart. Of course, that is likely why it is cheaper than a lot of its competitors. These features include Cloud DVR, multiple users, unlimited simultaneous screens, enhanced playback and much more.

Like most other streaming Live TV services, Hulu also has its own cloud DVR.

Included with the base plan for $55/month, you will be able to record 50 hours of content. Hulu does have an upgrade available that will get you 20 hours of storage for $9.99/month. That’s pretty much the industry standard, and not the exception (YouTube TV is the exception).

The 50 hours that everyone gets, may not seem like a lot. But keep in mind that you do also have access to Hulu’s massive on-demand library. So you likely won’t be recording as much content as you would on FuboTV or YouTube TV.

One of the features of live TV services that most people don’t talk about, is the simultaneous streams. Most of them are capped at around two or three streams, including Hulu + Live TV.

For most people, the two screens should be plenty, but having the option to upgrade to unlimited is a really nice feature to have. Even if you do need to pay $10/month for it.

Much like any other streaming service, Hulu also allows for up to six users per account. Now, these do not work like YouTube TV, where each user has their own login. You’d be using the same login, and you click on your profile.

Each profile has their content tailored to their preferences and interests, as expected. There are some unique parental controls available too. Where subscribers can create profiles that will restrict viewing to specific content, and they can block certain types of programs. There is also an option to limit searches to only return viewing options that meet their specific requirements.

It’s better than nothing, but offering up the ability for each user to have their own login would be better, and more secure. As you’re not sharing passwords.

Hulu has some enhanced playback features available too. Viewers are able to rewind most live channels to the beginning of the show or movie currently running. This is in contrast with other services that only allow you to rewind to when you started, or fast-forward til you are live. Unless it is a show that you have recorded or are recording.

Additionally Hulu ad-free subscribers have the ability to download movies and shows to watch while on the go. Even if you don’t have mobile data or WiFi available. This is not available for Live TV because, well it needs to connect to something to get the Live content.

Can I watch Hulu + Live TV when I’m not at home?

Yes, unlike most cable companies, Hulu does allow you to continue to watch Live TV when you are not at home.

So if you’re going to be gone when the Super Bowl is on, you can watch it on your phone, on your laptop, or anywhere else, even if it is not at your home.

If you are outside of your market – say for example you live in Chicago and are visiting family in Atlanta – you will still be able to watch Live TV. The only caveat is that you won’t get your locals. You will get the locals for the channels in the market you are currently in.

Is it available in 4K?

Hulu as well as its Live TV counter-part, streams in 720p, 1080p and 4K UHD. Unfortunately, most streaming live TV channels do not broadcast in 4K. But you will get either 720p or 1080p depending on the channel. Most channels do 1080p now, so you’ll get a really good looking stream here.

As far as non-live TV content, the majority of the newer content is filmed in 4K and there is even support for Dolby Vision on a lot of these titles.

Is Hulu + Live TV worth it?

Hulu + Live TV is perhaps the best value for streaming Live TV. And that is largely due to its vast on-demand library that it has been building up for over a decade. Most of its competitors have only a fraction of the content that Hulu does. So even if you don’t opt for the Live TV option, you can get Hulu and have plenty of content to watch, with new episodes landing daily and weekly.

At $54.99 per month, Hulu + Live TV is also far cheaper than some of the other services out there. FuboTV, YouTube TV and AT&T TV NOW are all priced at $64.99 per month now. Sure they have more channels, but not that many more. And they also don’t have that vast Hulu library of on-demand content available. That makes Hulu + Live TV a pretty impressive option. And it’ll continue to add more channels in the coming months. However, fingers crossed that it doesn’t see as many price increases as other services have recently.

You can sign up for Hulu + Live TV by clicking the link below.