Hulu is one of the OG’s when it comes to streaming. It’s been around since late 2007. That’s around the time that Netflix started transitioning into a streaming service from mailing out DVDs to its customers. It was was originally owned by NBCUniversal, Disney and Fox, the owners of the biggest OTA networks in the US. Now it’s majority owned by Disney, and have gone through some significant changes over the years. But is it worth signing up for?

In this guide, we’ll be covering everything that you need to know about Hulu, and even the differences between it and Hulu + Live TV. To help you decide whether you should sign up for Hulu or not.

In the early days, Hulu was a place where you could watch TV shows the day after they aired on ABC, FOX, NBC and a few other networks. Though those were the major ones. There were also movies available on Hulu, but the big seller for Hulu was being able to watch the newest episode of Grey’s Anatomy on Friday, the day after it aired. Basically a DVR without having an actual DVR.

Hulu used to only offer its service with ads, which annoyed a lot of people, since they were paying for a service and still seeing ads. Now we’ve kind of gotten used to this. With other services doing it too – Paramount+, Peacock, and more. But Hulu also debuted an ad-free tier for users to sign up for as well.

Since then, Hulu has ventured into making its own original content. And Disney now owns a majority share in the service, with Comcast/NBCUniversal having a significant share as well. Disney gained a majority share after it bought some of Fox’s business – which included 21st Century Fox.

Hulu has been a mainstay in the world of streaming services, right there with Netflix. Normally when you think of streaming, Netflix is first and then Hulu.

Hulu + Live TV is a bit different from regular Hulu. Essentially it is their Live TV streaming service and starts at $65 per month (currently, there’s a promo where you can get it for $54.99 per month for your first three months). Which does include regular Hulu, and gives it the biggest on-demand library in the business.

If you’re looking to cut the cord, then Hulu + Live TV is a really great option since it has the entire library plus over 65 live channels. Which does include sports.

You can opt to get just Hulu though, and still be able to get most of the content you’d find on the Live TV version of the service. You can find out more about it here.

How much does Hulu cost?

There are two plans for the regular Hulu service. There is the ad-supported tier that costs $6.99 per month. And then an ad-free tier that is $11.99 per month. Hulu does tend to have quite a few ads scattered through its shows and movies, so if you get annoyed by ads, then you might want to spend the extra cash.

Update: On October 8, 2021, Hulu raised its prices by $1 on the Hulu and Hulu (No Ads) plans. The Hulu + Live TV is still the same $65 per month. The Disney Bundle did not get an increase in price either. 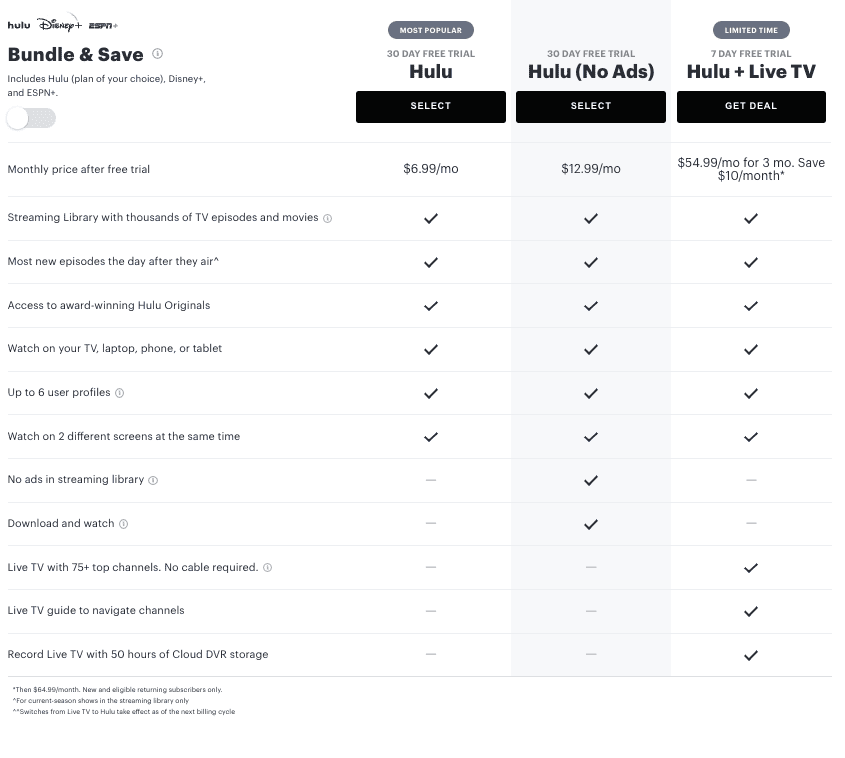 Can I bundle it with Disney+?

Since Hulu is majority owned by Disney now, it has bundled Hulu in the Disney+ bundle. Much like there is with Hulu, there are also two plans for the Disney+ bundle. You can bundle Disney+, Hulu (with ads) and ESPN+ for $14 per month. Or you can bundle the three with ad-free Hulu for $20 per month. That is cheaper than paying for each one individually. Since Disney+ is $8, ESPN+ is $6 and Hulu is $6 (or $11) per month respectively.

And if you want to bundle with Hulu + Live TV, it’ll cost you $72.99 per month. Which is a really great deal. Basically $7 more per month to add Disney+ and ESPN+ to your Hulu plan.

How can I get it for free?

Many years ago, Comcast would give Hulu to its customers for free. But that’s not the case anymore. However, there are still other ways to get Hulu for free.

The easiest way is to be a Verizon customer. Verizon offers the entire Disney+ bundle on its Play More and Get More Unlimited plans. So if you subscribe to either of those, you can get Disney+, Hulu and ESPN+ for free, as long as you remain a Verizon customer. 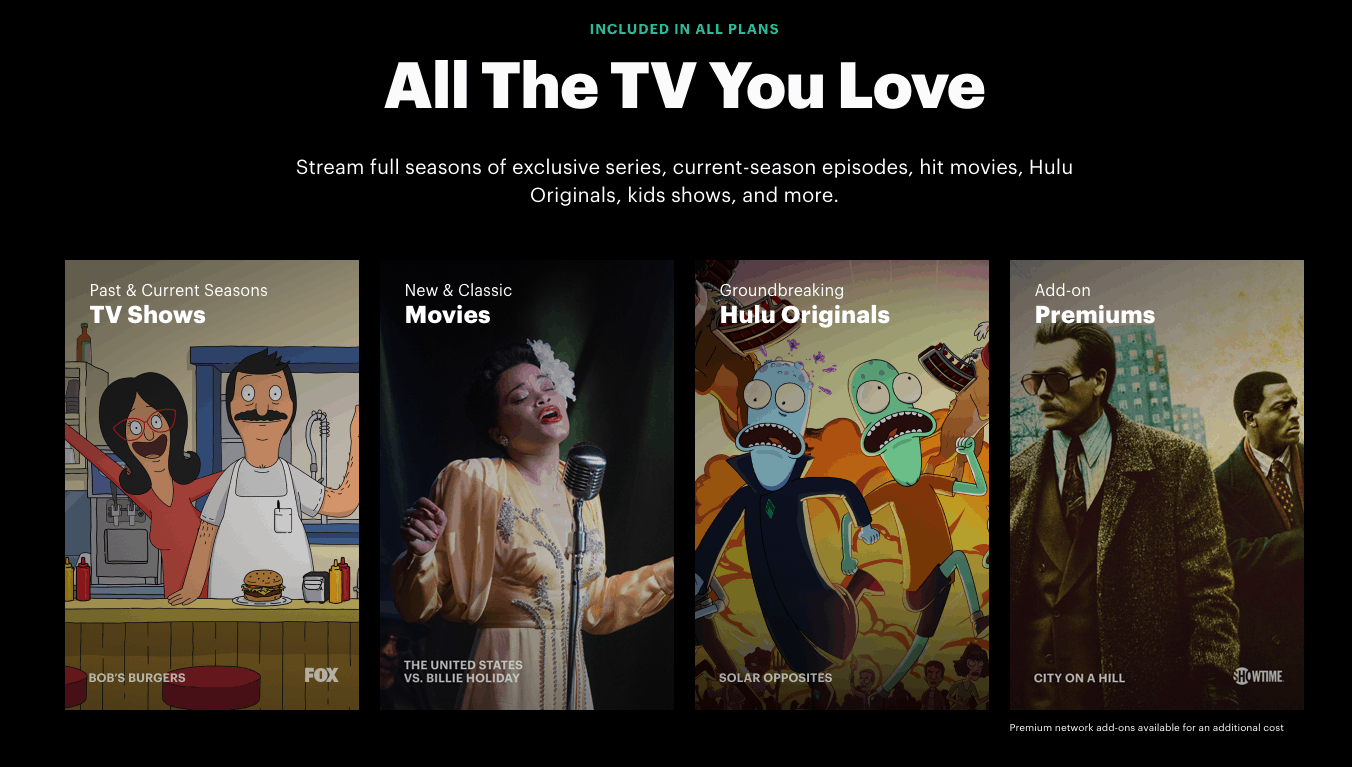 Hulu is still pretty affordable, even at $6 per month, it’s one of the cheaper streaming services available right now. And has a boatload of content. But you can add even more content to Hulu with some of their add ons.

You can add different premium streaming services to your Hulu account. These include HBO MAX for $15, Cinemax for $10, STARZ for $9, or Showtime for $11 per month. Obviously, if you add all of these to your account, your Hulu price can get expensive real quick. But you’ll also have a ton of content to watch on your couch.

These can also be added if you have Hulu + Live TV.

Hulu doesn’t spend anywhere near as much on original content as Netflix does, but it does still have a nice library of original titles. It also helps that ABC creates a number of originals for Hulu itself. Since both are owned by Disney, it makes loads of sense.

Here are some of the bigger titles from Hulu’s library of original series:

And that’s just a fraction of the original titles that are currently available on Hulu. There are plenty more available and loads more coming. So there’s definitely something for everyone to watch.

What devices are compatible with Hulu?

Hulu is available pretty much everywhere you can imagine, from browsers, to smartphones to smart TVs and beyond. Here’s the full list of every device that supports the current Hulu app.

If you have an older device, you may have to use the “Classic Hulu app” which means that you won’t get access to the live TV or some of the premium add-ons. But you can watch Hulu still. These devices include: 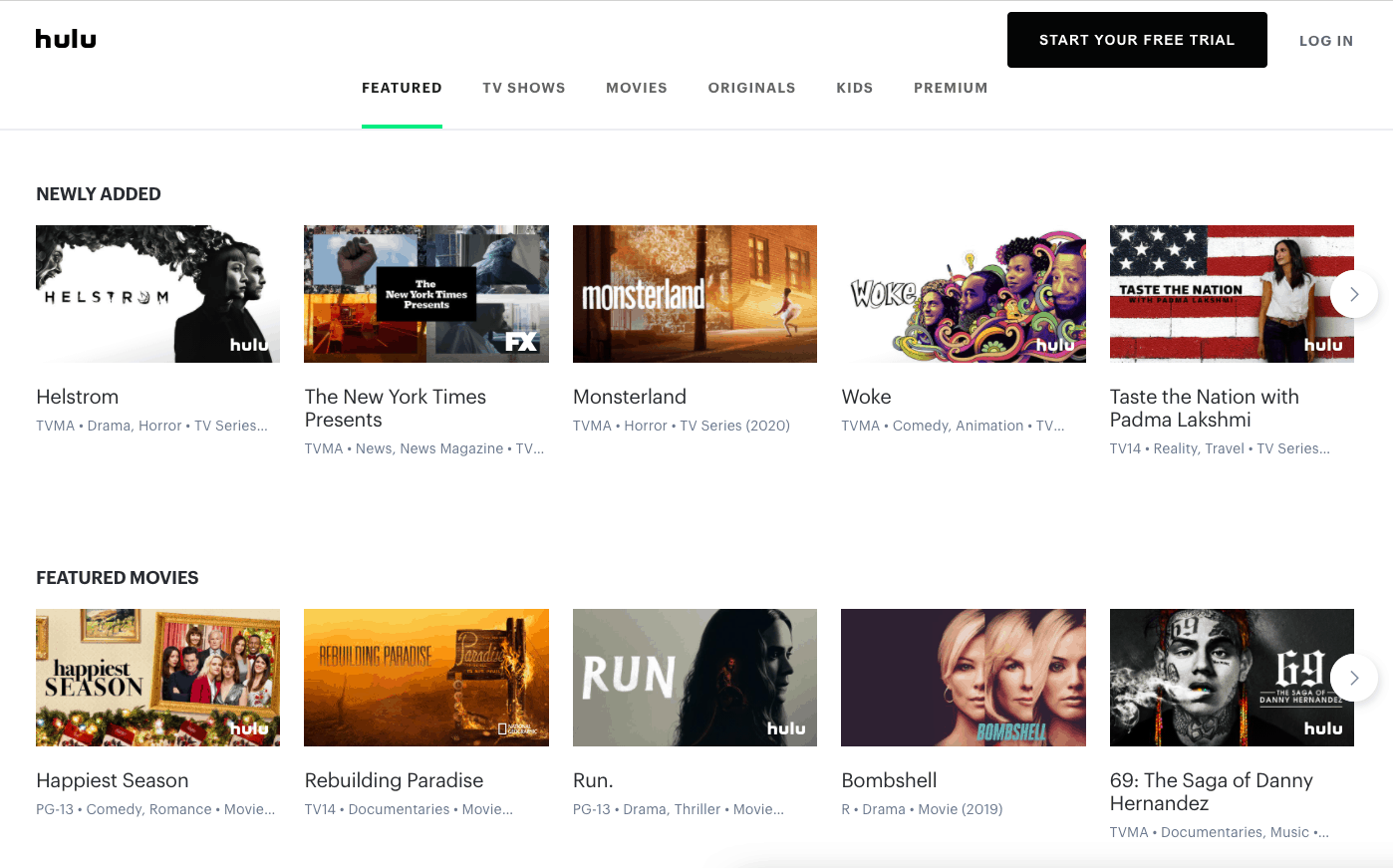 How fast does my internet need to be, to watch Hulu?

Hulu rarely buffers anymore, since the Internet is fast enough for most of us to stream it without any issues. And it has had many years to optimize its streaming too. However, for Hulu in HD, you do need at least 6Mbps download speed, and at least 8Mbps for Hulu + Live TV. The more, the better, as always. Especially if there are others in your home that are streaming or doing other things on your network.

You can sign up for Hulu by clicking here.

You will be able to start your free trial, which is 30 days. During the sign up process, you’ll be asked which tier you want to sign up for. And which premium networks you want to add. And that’s it/ It’s really pretty easy to do.

And of course, as is the case with all of the streaming services, there are no contracts to sign, and you can cancel at any time. However, if you cancel before your next billing date, you will not be refunded for the unused days. Instead, your account will continue to be operational until that billing date. Hulu does allow you to pause your account for a few months, or cancel it. And if you want to sign up again, your information is all there, including your watchlist and recommendations.