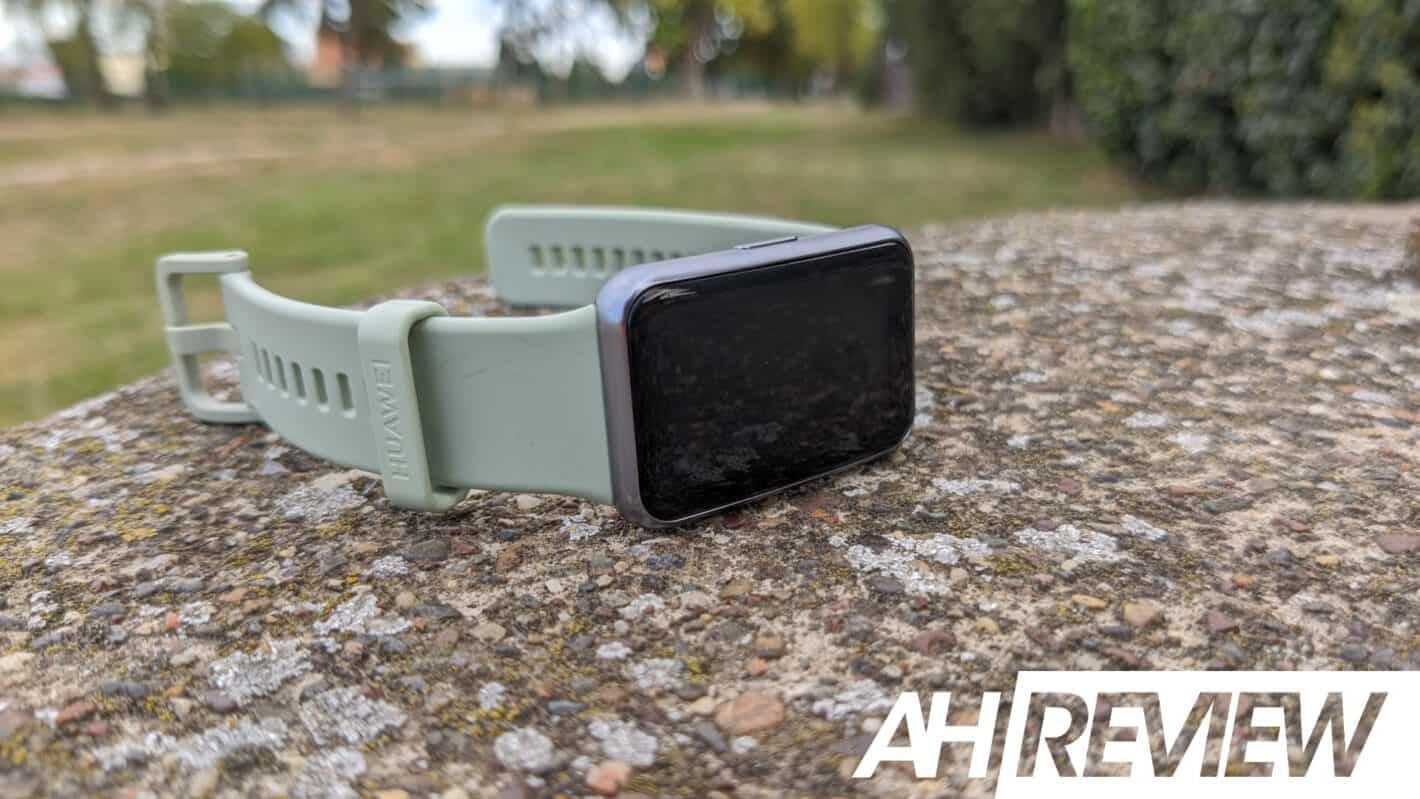 The Huawei Watch Fit is essentially a lightweight smartwatch, with a bunch of fitness-oriented features.

Huawei supplied us with a review unit of the Huawei Watch Fit, but didn’t have a say in our opinion, nor did they see this review before you. We’ve been using the device for a couple of weeks before forming an opinion.

The Huawei Watch Fit is both a fitness tracker and a smartwatch in one. Think of it as a small smartwatch that has a huge focus on fitness. I’ve been using this gadget for almost three weeks now, and quite frankly, I had a good time with it. It does most things really well, though it does stumble in some areas. Software is once again a sore point for one of Huawei’s wearables, even though things look a bit better than they did last year.

This gadget’s pluses definitely outweigh its minuses, and that is something you should remember even before we get into it. Keeping its price in mind may also be a good idea, as the Watch Fit costs around $100. That being said, let’s get down to the Huawei Watch Fit review, starting with its design.

A great-looking hybrid that is also comfortable to wear 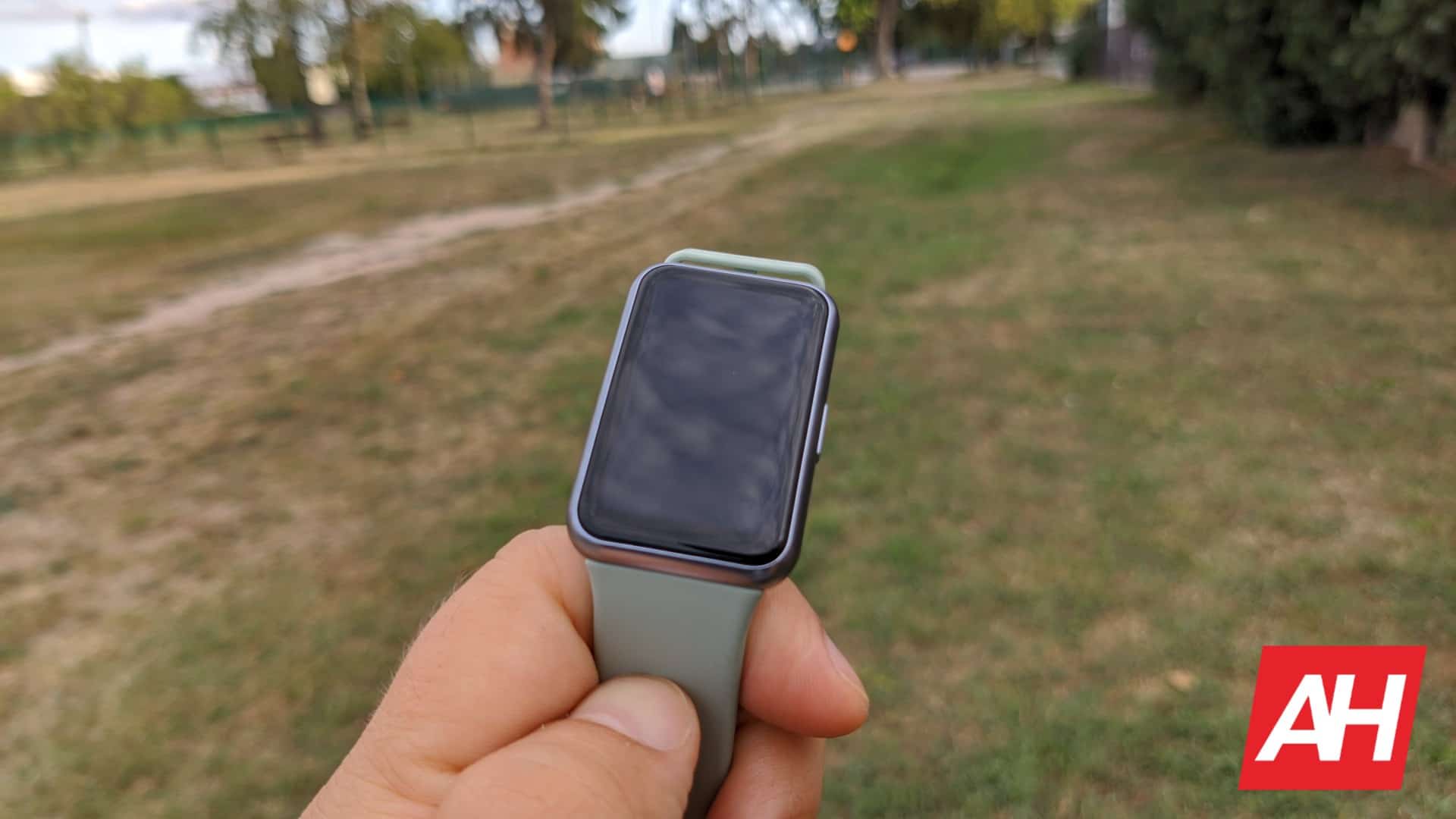 Those of you worrying about its build materials based on its price tag… you shouldn’t be. The device is made out of metal, well, its body is. Not only is it made out of metal, but its body is really slim at 10.7mm. This device is also quite light at 21 grams, without the strap. It comes in four colors, Graphite Black, Mint Green, Sakura Pink, and Cantaloupe Orange. So, you have plenty of choices here.

The size of the device itself is also perfect, in my opinion. On my average-sized wrist, it looks fine, and I imagine it’ll be a good size for the opposite sex as well. The watch is really comfortable to wear, partially thanks to a comfortable silicone strap that comes with it. Unfortunately, though, you won’t be able to use your existing watch straps with this thing. Why? Well, it has proprietary connectors. It’s really easy to replace, but you’ll need Huawei’s original straps in order to do that.

The bezels are thin, and the glass is curved

The watch has an elongated, square shape, and the same goes for its display. The bezels are quite thin, and the glass on top of the display is curved. That was actually a great design choice by Huawei, as I really enjoy scrolling on this thing, way more than I do on regular watches with flat glass. I was actually surprised by how much I enjoyed using it. There is a single button on this watch, and it’s placed on the right side.

Right next to that button, you’ll notice a microphone, by the way, while a speaker is not included. At the very bottom of the watch, you’ll spot a heart rate sensor. The Huawei Watch Fit does not support wireless charging, by the way, you’ll need to use the included charging cradle. That cradle doesn’t feel all that good, it actually feels cheap, but you’ll rarely use it. Yes, this thing’s battery life is great, but more on that later. 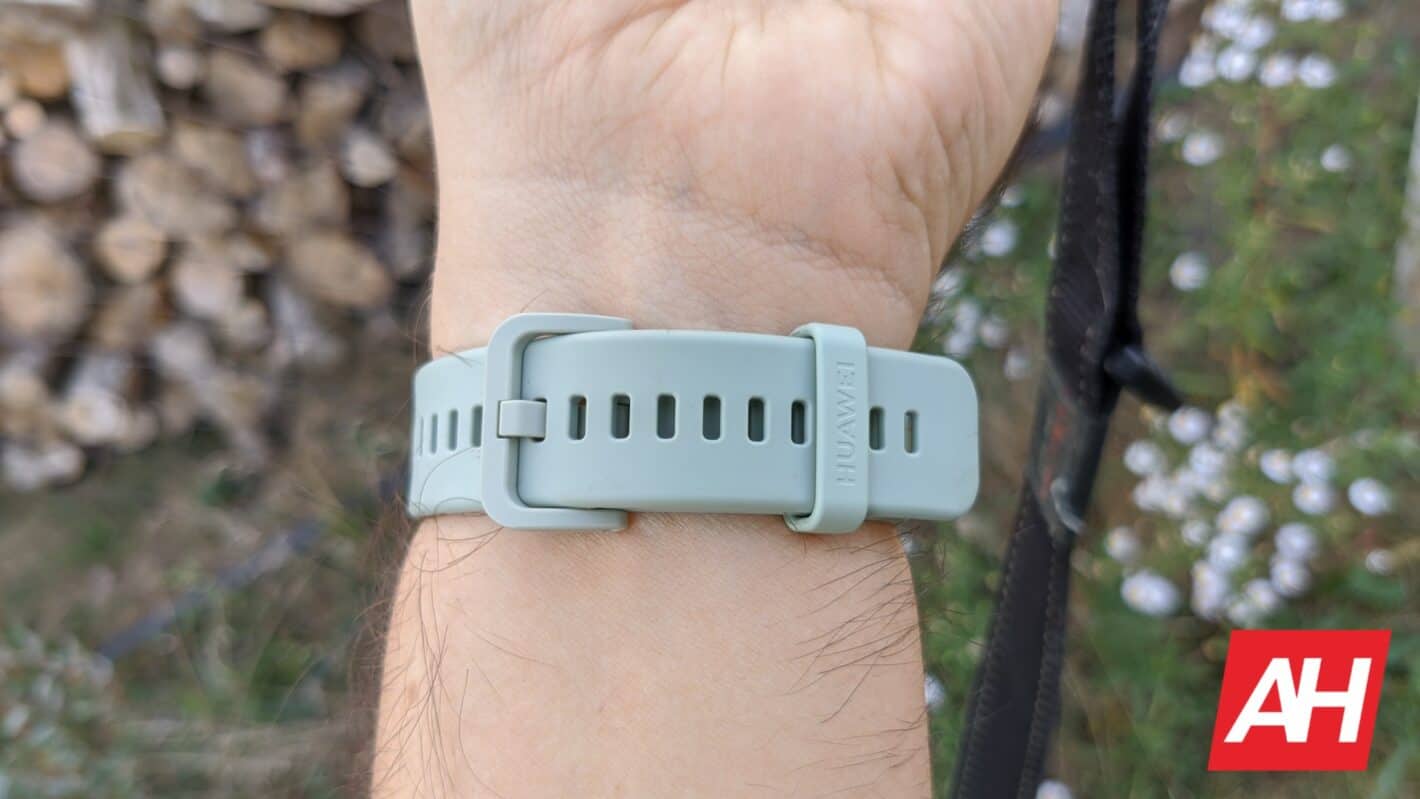 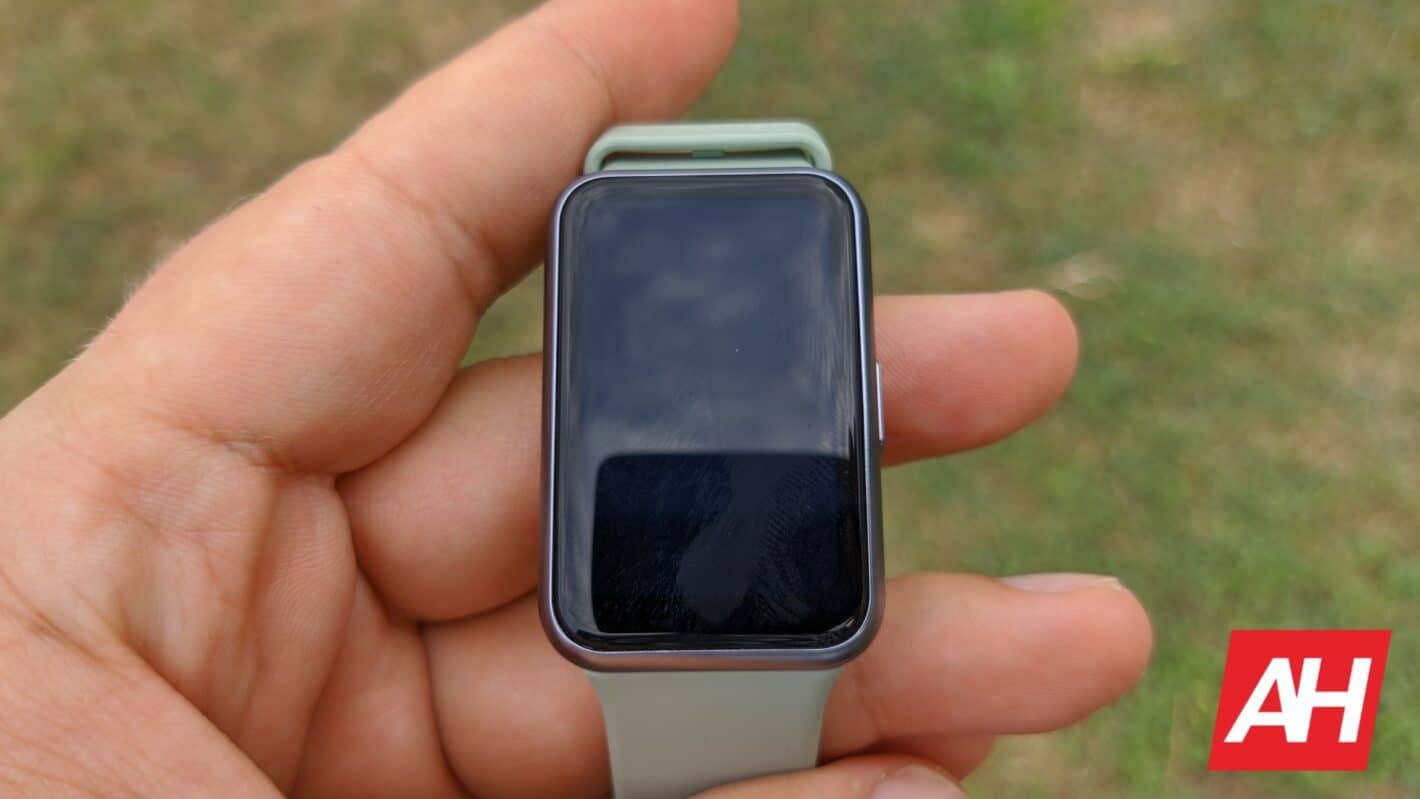 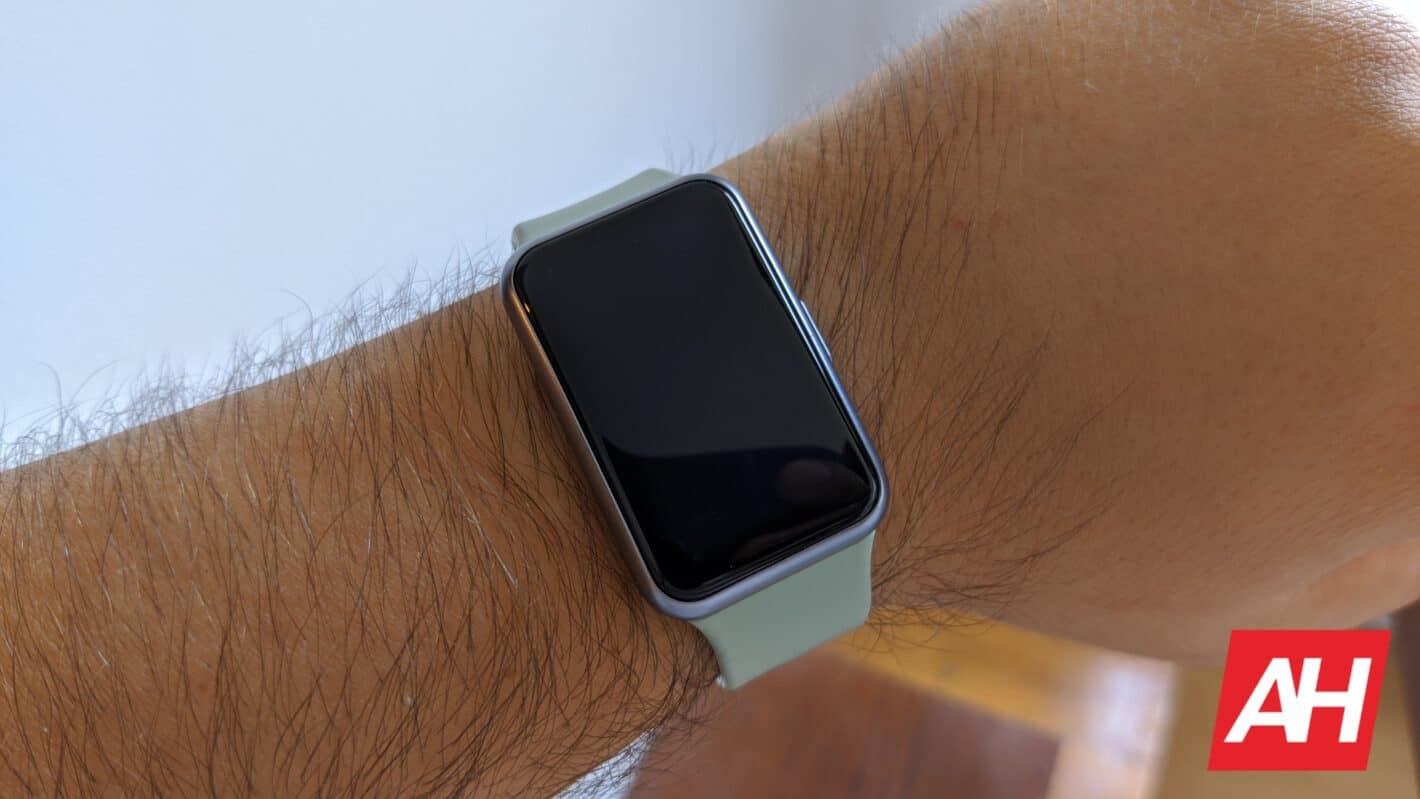 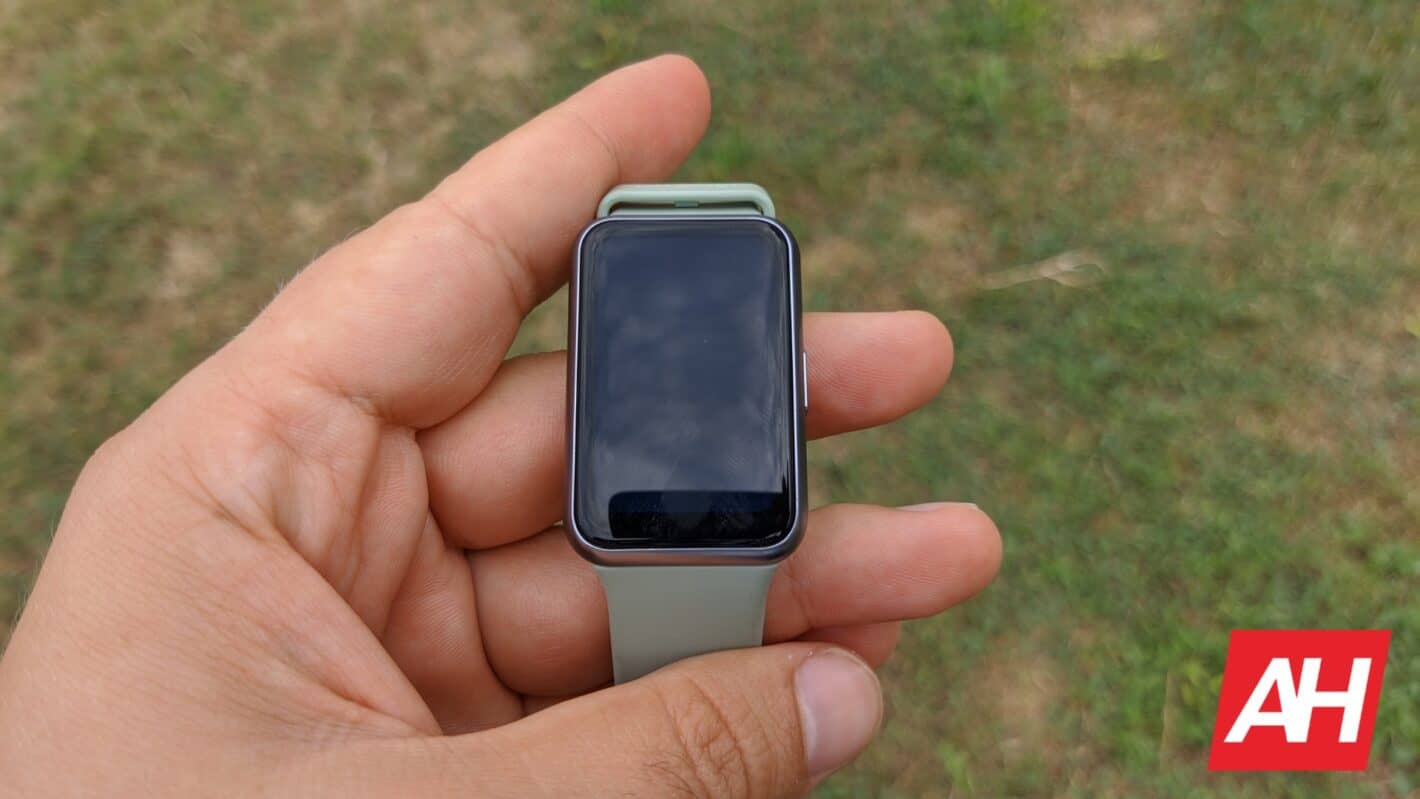 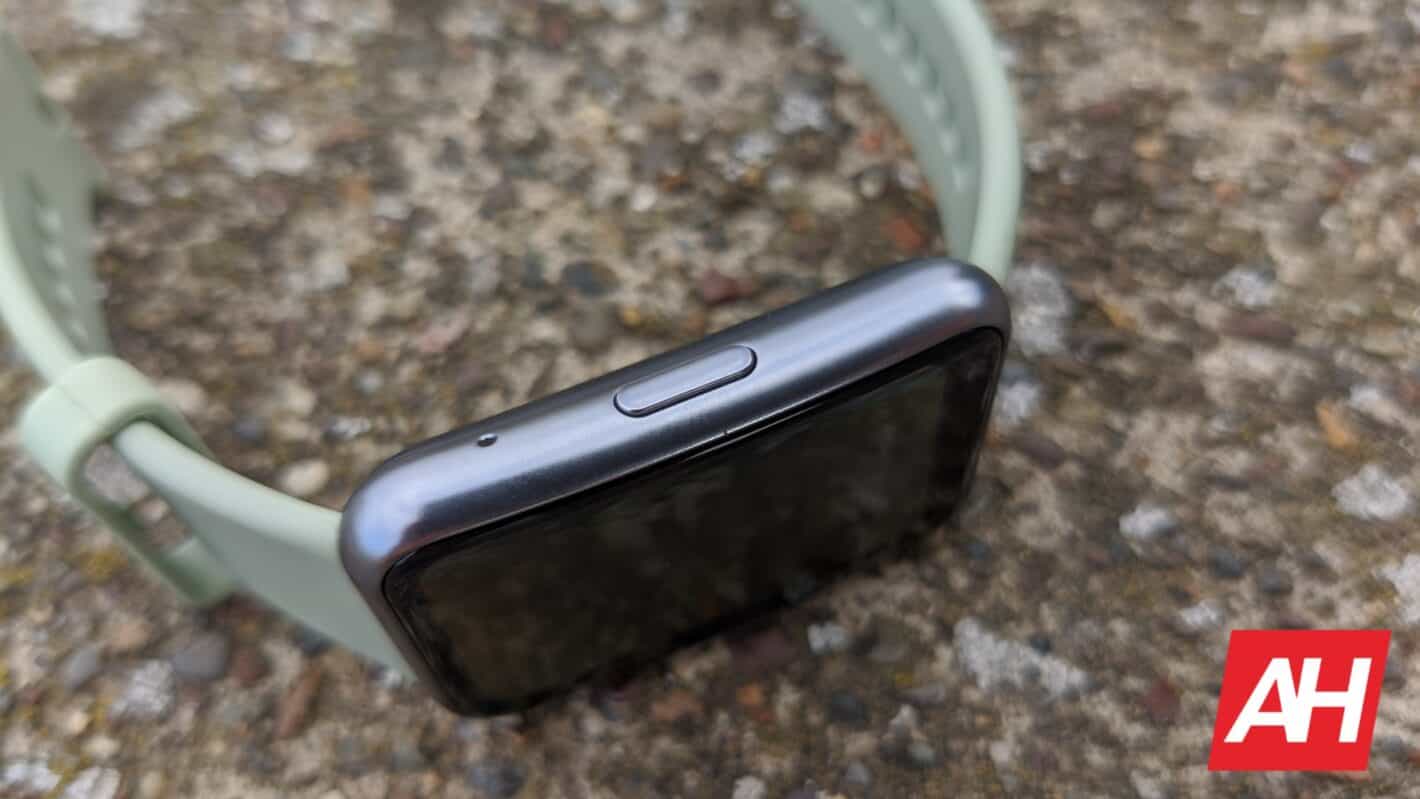 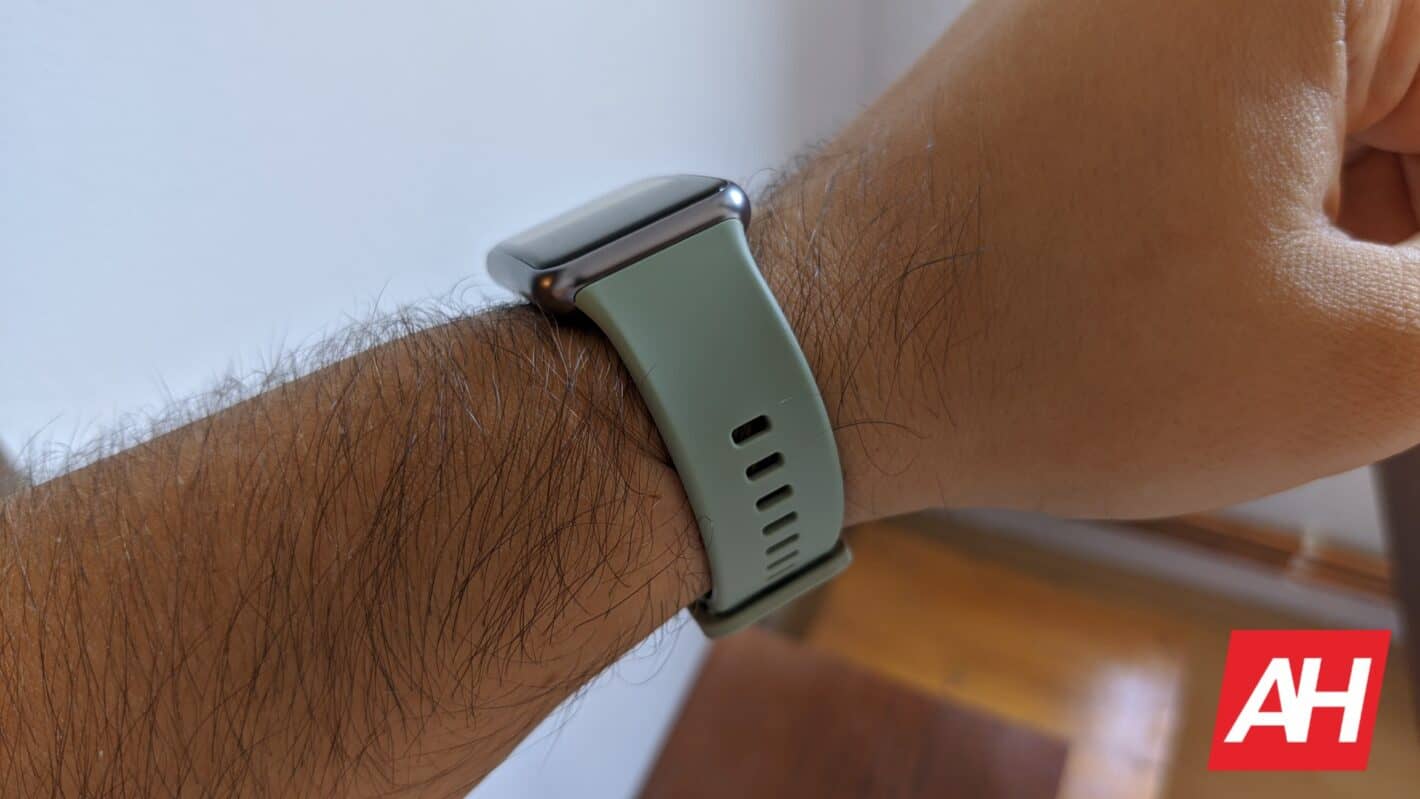 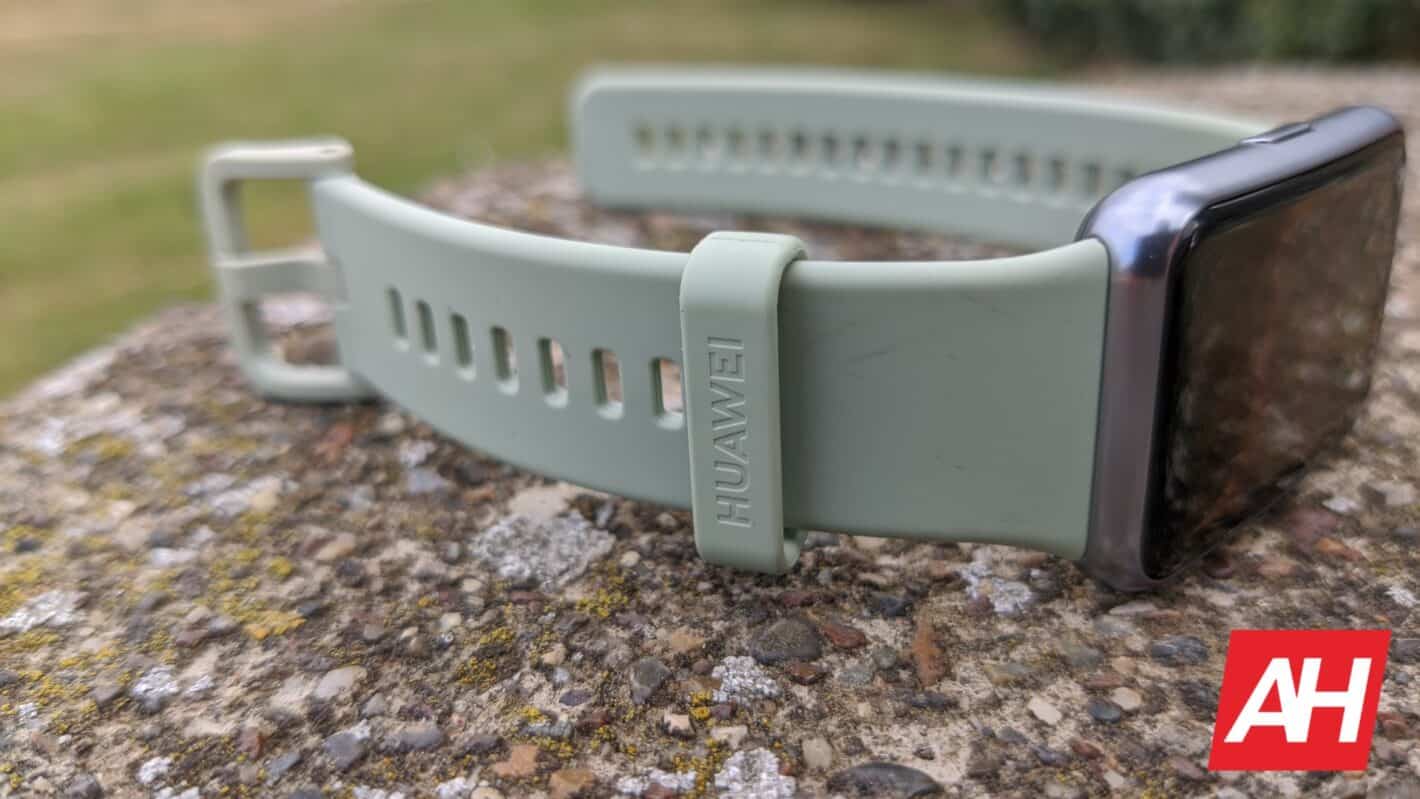 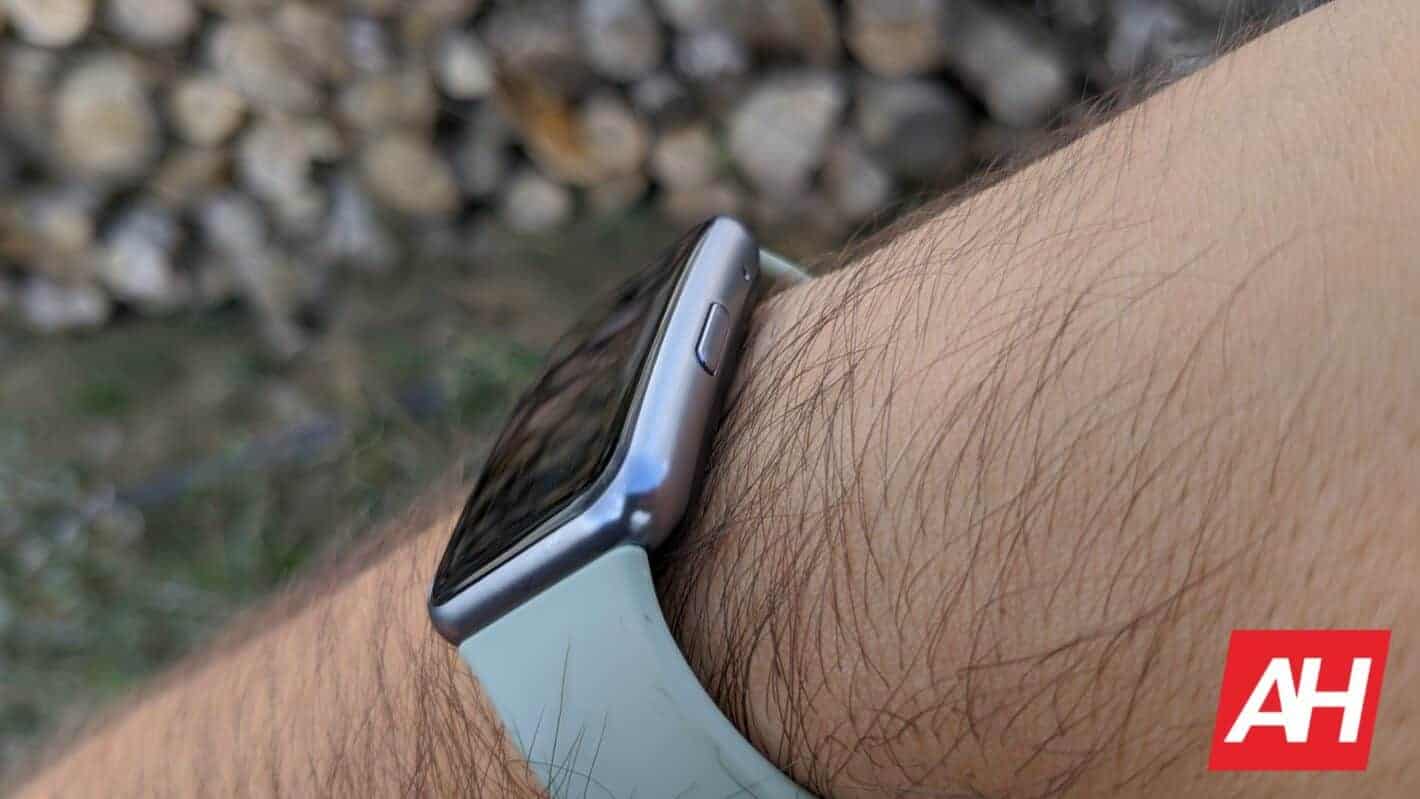 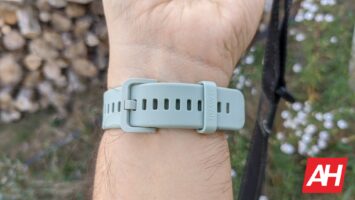 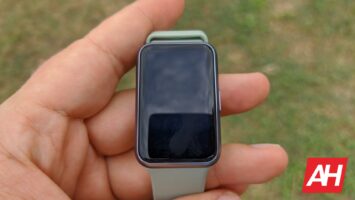 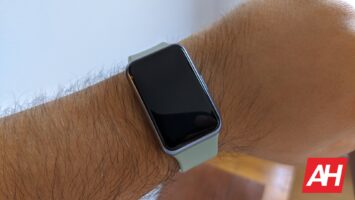 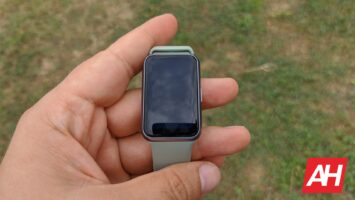 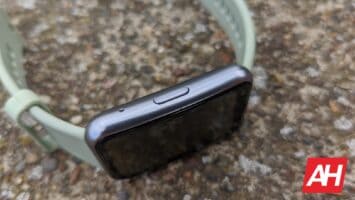 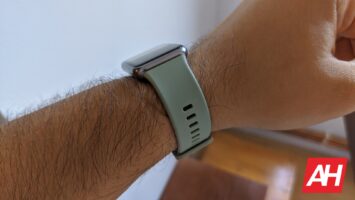 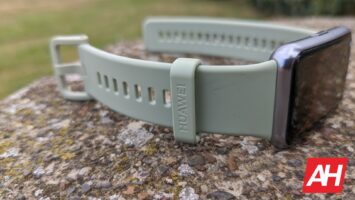 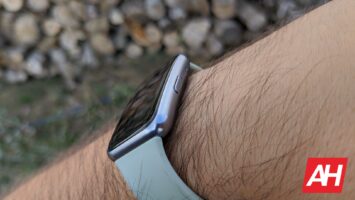 The display is both sharp and bright enough

The display is… well, it’s really good. The Huawei Watch Fit features a 1.64-inch 456 x 280 panel. This is an AMOLED display, and it is touch-sensitive, of course. The display is quite responsive, and thanks to the curved glass on it, I actually enjoyed using it… quite a bit. I was surprised by how much I enjoyed using it, to be quite honest. The colors on the display are quite punchy, and the blacks are black. This is not one of the best AMOLED panels I’ve seen on smartwatches, but it’s far from being the worst. It’s more than good enough. 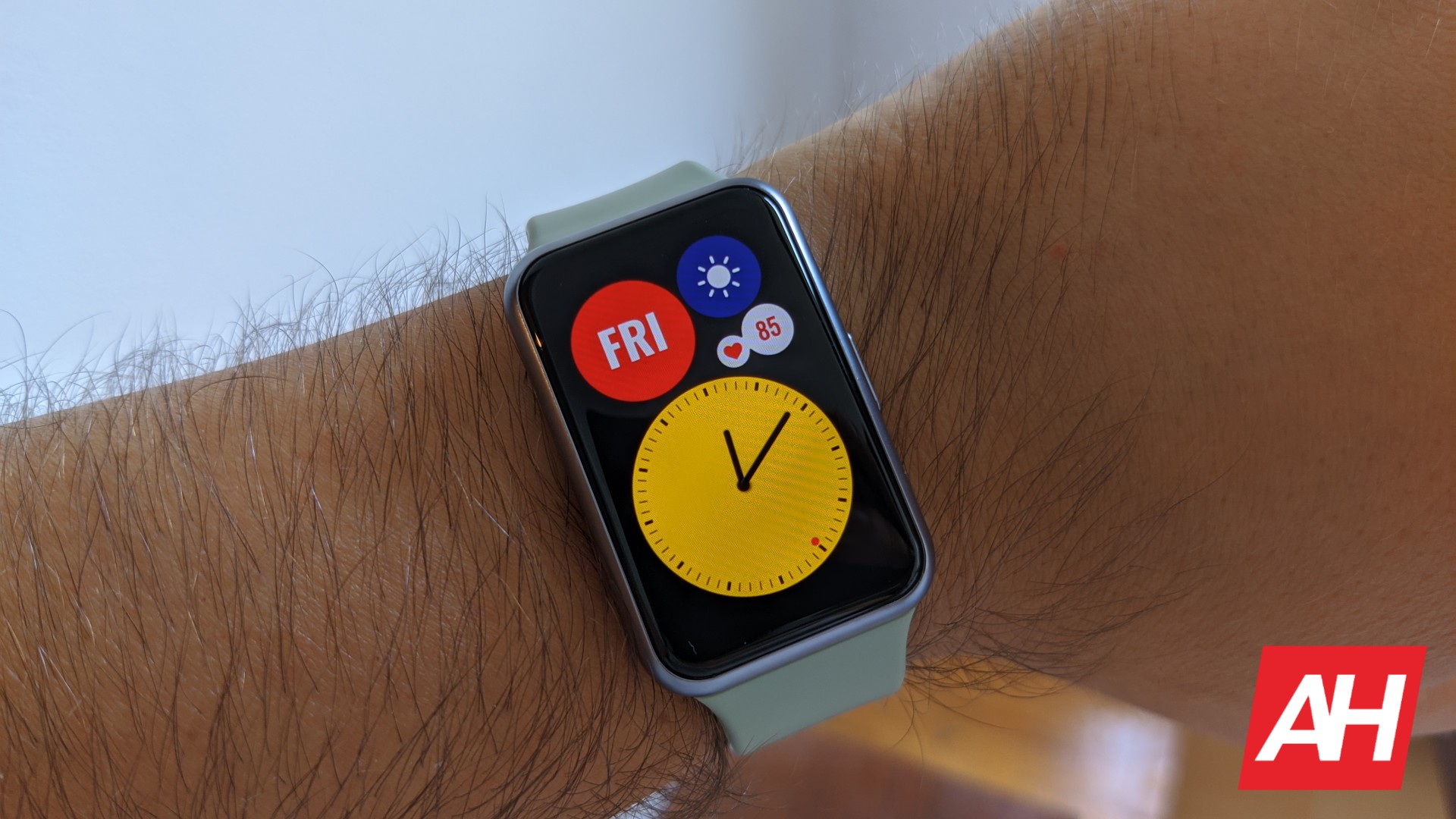 You can see what’s going on the display, even when outside, even though it’s not exactly the brightest display around. I did notice that on occasion, it did not register my swipe the way it should, but instead, it registered it as a press on the display. That didn’t happen often, but it’s something worth noting. I’ve had this happen on some other Huawei smartwatches as well, by the way. Overall, though, this display is definitely good enough, especially when you consider the price tag of the Huawei Watch Fit.

Now, the performance of the watch is really good. Do note that the software is the issue, as is on other Huawei watches I’ve been using lately, but more on that later. When it comes to sheer watch performance, it’s great, actually. The watch is extremely responsive, and I did not notice any lag. An occasional stutter is there, but it’s so rare, you’ll hardly even notice it. The watch is extremely smooth, and the Kirin A1 is probably the main reason why. That processor has been used in many other Huawei wearables, including the Huawei Watch GT 2 Pro, the company’s flagship smartwatch. 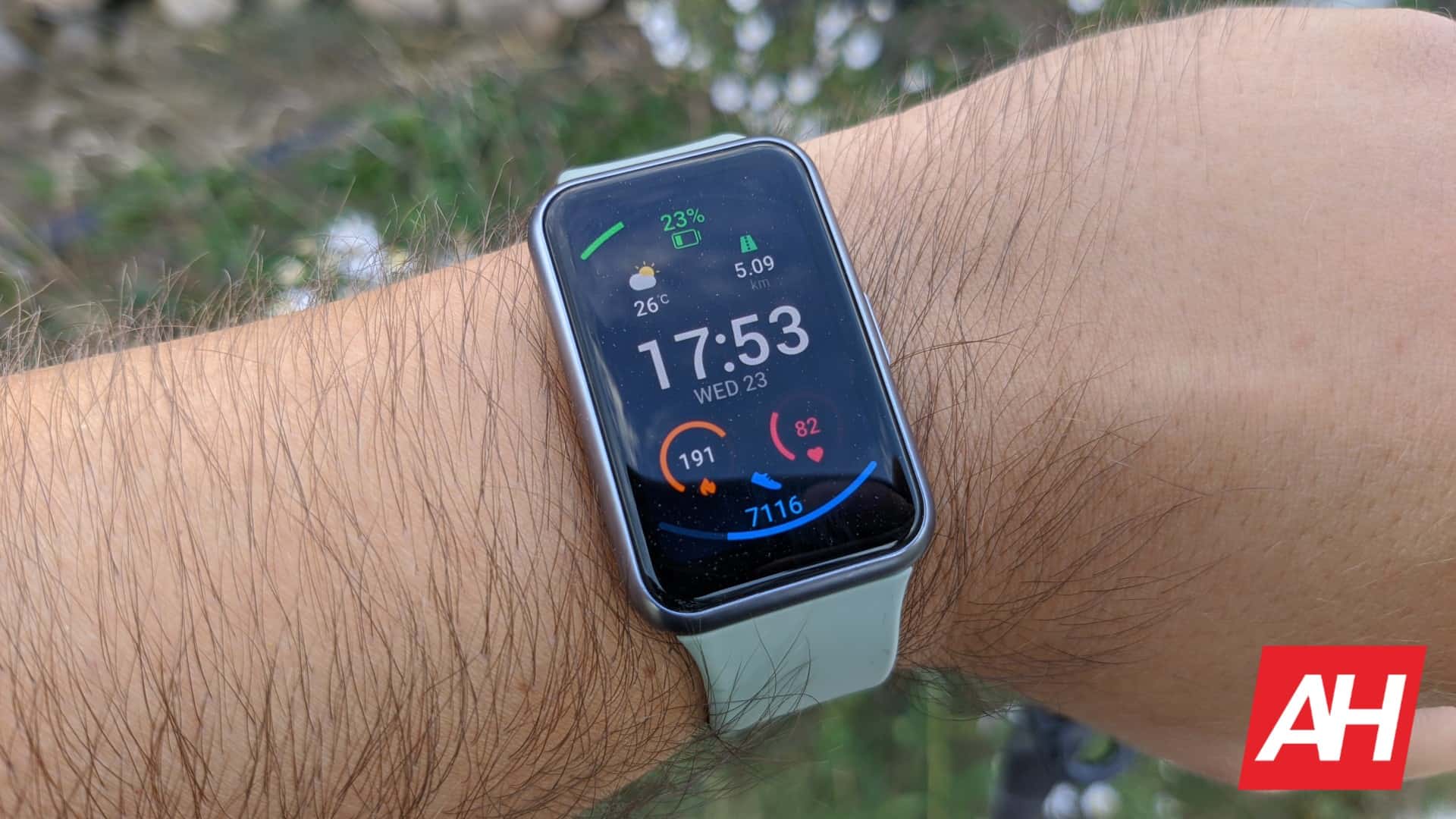 When it comes to navigating the UI, opening apps, and general usage of the watch… well, everything works great. I really can’t complain, as the performance is comparable to Samsung’s Tizen watches, and better than on any Wear OS watch I’ve used. That being said, the software itself is the issue, as is the case on other Huawei watches I’ve used in the last year or so. I’ve stumbled on quite a few issues with it, mostly the notification system, to be quite honest, so let’s talk more about that.

Software could be better, especially the notifications system

On top of that, you also can’t swipe away a single notification from the watch, until you open it. So, you cannot swipe it away while browsing through a bunch of them. In order to remove all of them, you need to scroll all the way down to the clear all button. The thing is, scrolling is not the fastest on the watch, so that can be quite a chore if you have plenty of notifications listed on that screen.

You cannot reply to notifications 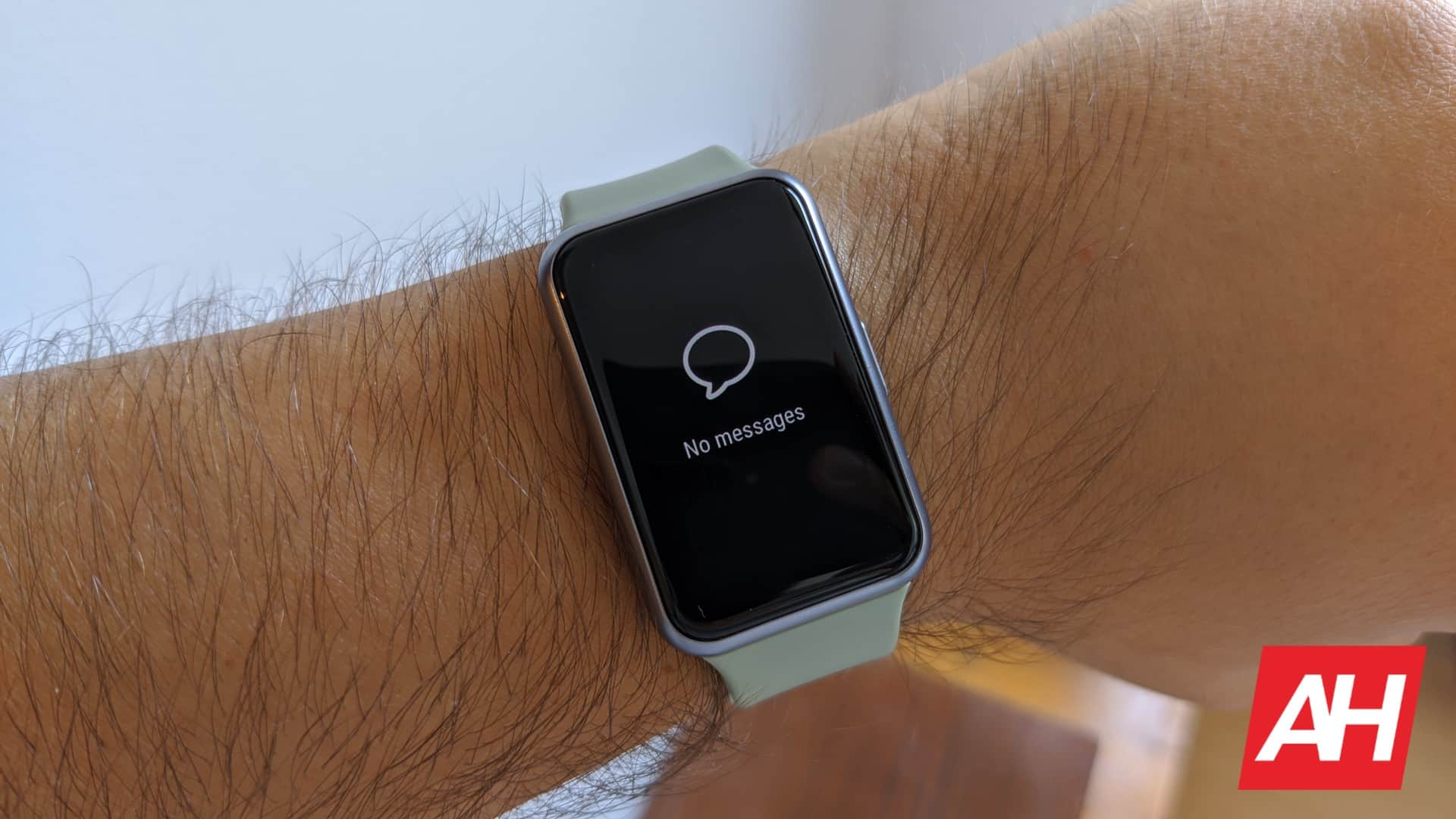 I would have also appreciated some more customization options here. The watch doesn’t really allow you to do much with the home screen pages. The watch faces that you have access to are also somewhat limited, You can tweak some of them, but it would be great if the watch allowed us to do more. This very much feels like a software that is in early stages, while the general performance is good and the watch is stable, many features are still missing. I do hope Huawei is working on improving things, as the software side of things is really holding their wearables back.

I had some connection issues with non-Huawei devices

Now, the Huawei Health app also tended to disconnect while I was using the Huawei Watch Fit with a OnePlus phone. That’s due to Android itself, it seems, not OnePlus in particular. Locking the app in the background, and removing any battery-saving restrictions didn’t help. Such issues were not present when paired to the Huawei P30 Pro, though. That is something that Huawei needs to find a way around, as many people will want to use this thing with smartphones that don’t come from Huawei.

There are 96 workout modes available on the watch

On the fitness side of things, this watch is actually really well-equipped. That is to be expected, considering that its name implies it’s a fitness wearable. Huawei did a really good job not only including various fitness-oriented functions on this watch, but combining them with the software. In that regard, the software is good, really good, the complete opposite to notifications. So, let’s see what the watch offers, in terms of fitness. 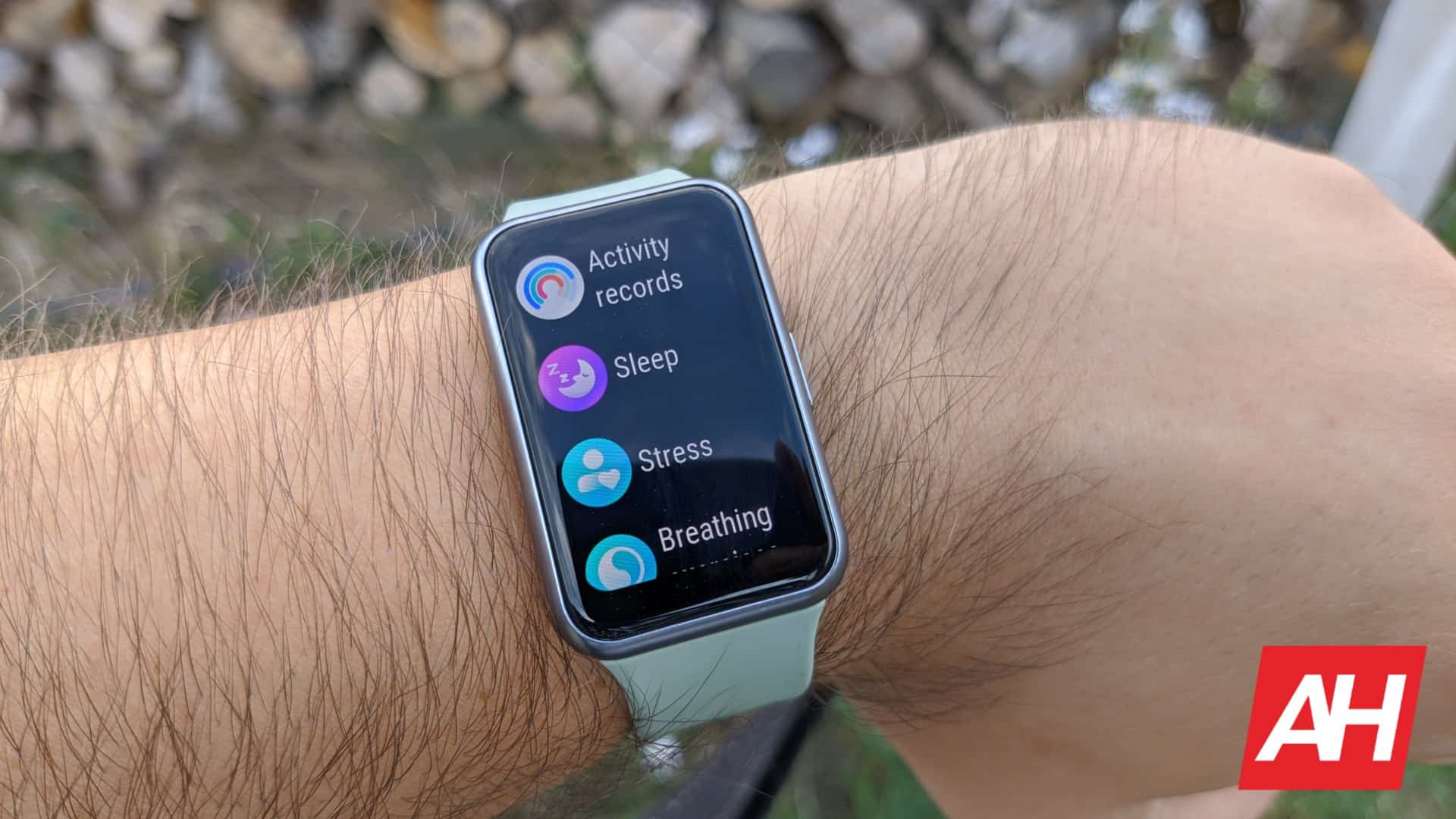 This watch comes with 12 kinds of animated quick-workouts, as Huawei calls them. Some of those are: full-body stretch, ab ripper, exercise at work, and so on. On top of that, there are 44 standard movement demonstrations included. That’s not all, though. The company included 96 workout modes on this watch, and that’s more than you’ll find on most watches out there, if not more than you’ll find on all of them.

I, of course, couldn’t have tested all of those workouts. I did, however, try out the running and biking aspects, and everything worked fine. The results were close to those offered on Wear OS and Tizen watches I’ve used, so it’s all good in that regard. The watch does have a heart-rate sensor on the bottom, and it can keep track of your heart-rate 24/7. It is also equipped with Oxygen Saturation Detection (SpO2). 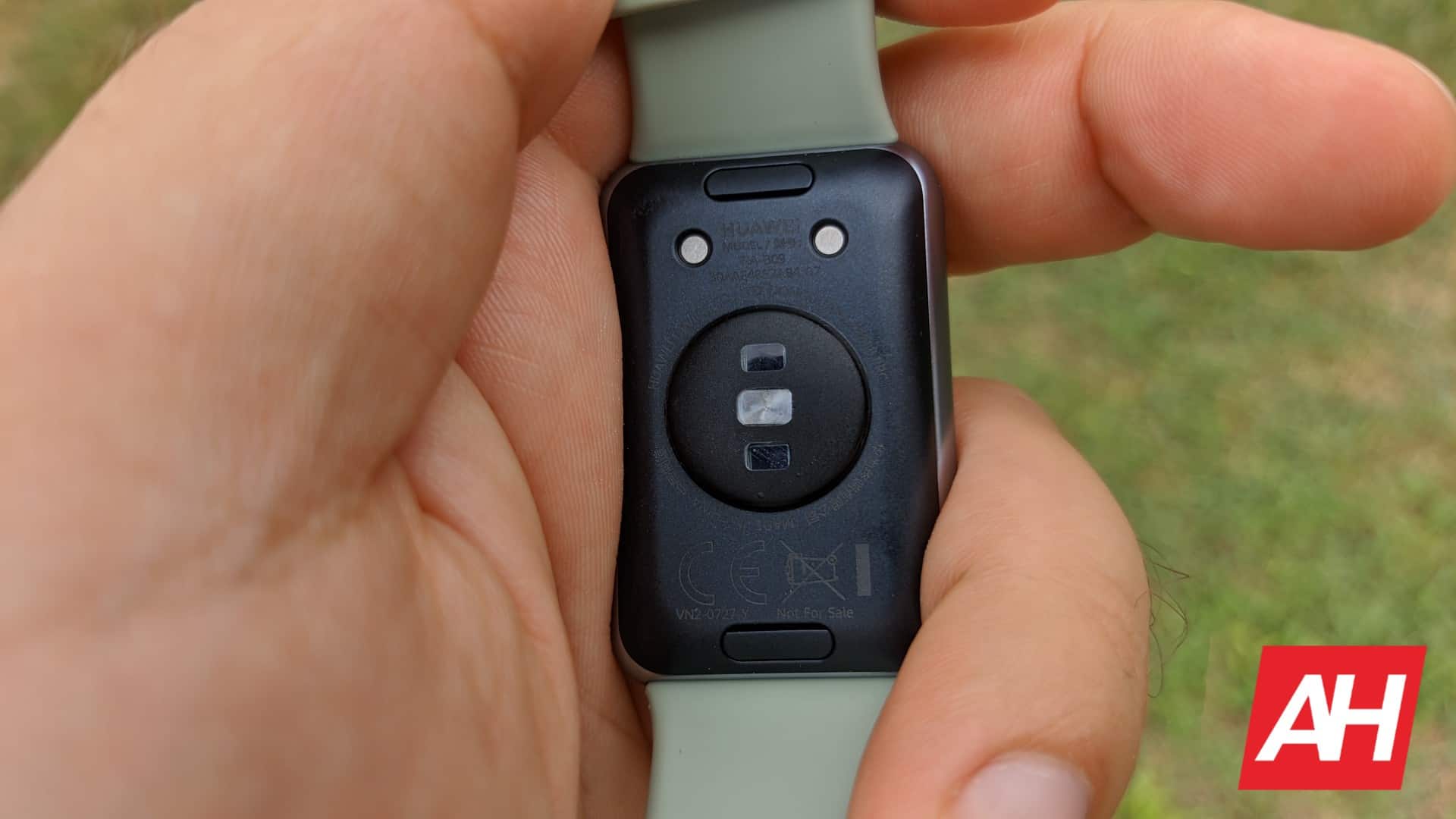 Huawei also included a special feature for women, as the watch can keep track of your menstruation cycles and estimate ovulation date. That’s not all, as the watch acts as a sleep tracker as well, thanks to Huawei TruSleep 2.0. It will not only track your sleep habits, and analyze them, but also provide advice on how to improve your sleep quality. Sleep tracking was a bit of a hit and miss in my testing, but that was the case on every single smartwatch and fitness tracker I’ve used, so… there you have it.

If you’re getting stressed out often, well, this watch can keep track of that too. The Huawei TruRelax technology is included, for an all-day stress tracking. The Huawei Watch Fit will also provide you with suggestions in form of breathing exercises, which should help you relax. All in all, this watch is extremely well-equipped in the fitness department.

The battery lasts for over a week, even with heavier use 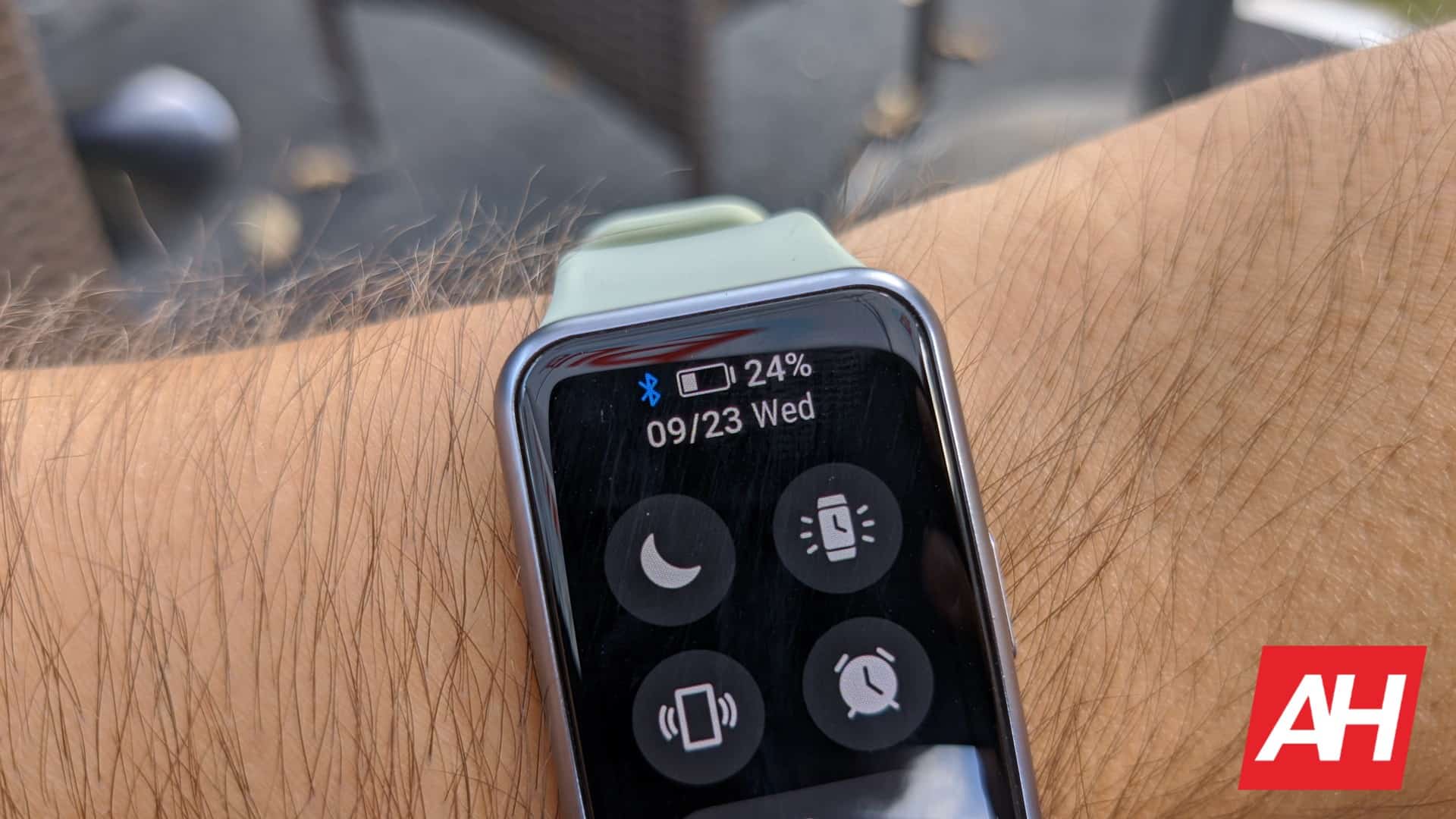 I’m primarily thinking of Wear OS, Tizen, and Apple watches. Pretty much every single one of those watches offer 1 or 2 days of battery life with regular use. The Huawei Watch Fit can monitor everything and offer days of battery life with no issue. Once it’s running low on battery, you’ll need to reach for a proprietary charger that comes with it. I would have preferred a wireless charger, to be quite honest, but you can’t ask for that at this price tag. The included charger works well enough, I’ve experienced no issues.

It’s a great fitness tracker which doubles as a smartwatch

So… is this the Huawei Watch Fit worth $110, or the equivalent where you may live? Well, yes, if you’re looking for a hybrid between a smartwatch and a fitness tracker, and you’re not bothered by the notification-related issues I’ve talked about. In every other way, this smartwatch is really great. It offers stellar battery life, a ton of fitness-related features, a really good display, and a solid build. Even if you’re more in the market for a smartwatch, that doesn’t necessarily look like a watch, this may be a good choice.