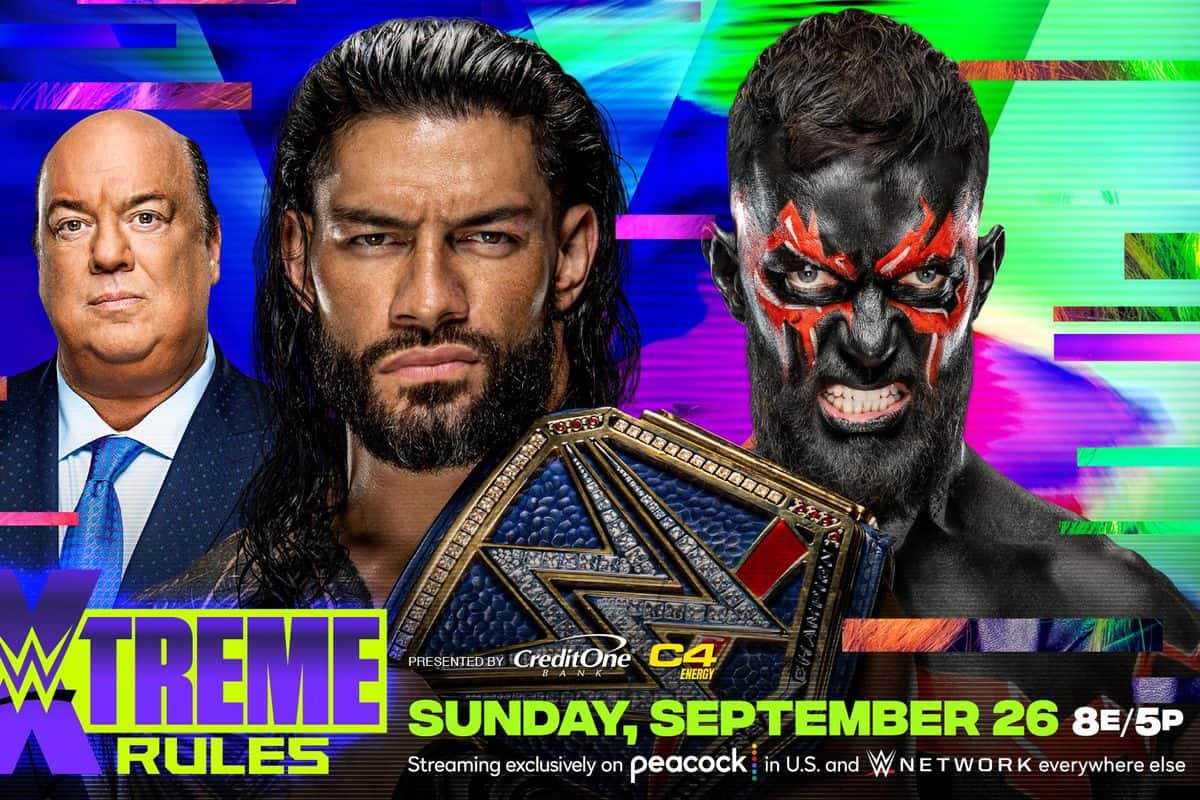 WWE is back with another match-themed PPV, this time Extreme Rules. Though that doesn’t mean much, since there are zero Extreme Rules matches on the card for this PPV. Almost makes you wonder why it is called “Extreme Rules”?

Anyways, this isn’t one of the big four PPVs, so we’re not going to see a lot of hard-hitting matches. Most of those are being saved for next month when the WWE returns to Saudi Arabia for Crown Jewel. Where we’ll see the first ever “Queen’s Crown Tournament” finals, and that’s a bit surprising since women are generally not allowed to wrestle in Saudi Arabia.

But, back to Extreme Rules. WWE has kept the card pretty light this time around, so this might be another, less than three hour, PPV. Which fans really like these days.

The main event is arguably for the WWE Universal Championship, between current champion Roman Reigns and the challenger, “The Demon” Finn Balor. These two have met before, in fact they met just a few weeks ago on Smackdown. But now Finn Balor’s alter-ego is here, The Demon. And that changes the game entirely.

Reigns has been champion since Summerslam 2020. Well over a year at this point, and he has challengers lining up months in advance now. With Brock Lesnar waiting in the wings for a chance at Crown Jewel to regain the Universal Championship. So it wouldn’t be too surprising to see Lesnar show up at Extreme Rules and potentially cost Reigns the match.

Reigns is the best thing going in the WWE right now. After partnering up with Paul Heyman in late 2020, he has become an unstoppable force, after almost a decade of being boo’d by the audience. Now he’s cheered (even as a bad guy).

Another match that many will be watching closely is for the Smackdown Women’s Championship. Last month, Becky Lynch shocked everyone by returning and inserting herself into the Smackdown Women’s Championship match (replacing Carmella, who had replaced Sasha Banks after an “injury”). She then went on to beat Bianca Belair, then champion, in just 26 seconds. Now, the rematch is here.

Becky Lynch just returned after over a years absence, due to having her first child, and she looks to be in the best shape of her life. She also turned heel – also known as being a bad guy or woman in this case. So she’s doing what she can to piss off the WWE Universe. And beating Belair in just 26 seconds, as well as rubbing it in for the past month, has done just that.

Both of these matches – which eminate from the Smackdown brand – are going to be great. Surprisingly, there is no WWE Championship match this time around. That is because Big E just cashed in his Money in the Bank contract to become champion less than two weeks ago. And there hasn’t been much time to build up a storyline for him. But it is looking like he’ll be facing the former champion Bobby Lashley at Crown Jewel, and Goldberg (who was originally getting a rematch with Lashley at the event). Which is going to be an insanely good match.

As always, the match card is subject to change. Though, given how light this card is, we doubt that any will be cut due to time constraints. However, we may see a squash match or another short match added to fill time.

How To Watch WWE Extreme Rules 2021

In the US, you can watch Extreme Rules on Peacock. It’s cheaper than the WWE Network was at just $4.99 per month. And if you have Comcast or Spectrum, you can get it for free. The PPV is included in the cost of Peacock. So it’s a no-brainer to sign up for Peacock. Which you can do here.

Outside of the US, you can watch WWE Extreme Rules 2021 on the WWE Network.

WWE Extreme Rules technically gets underway at 7PM ET on Sunday, September 26. Like with all of its PPVs for the past seven years, there is a pre-show that starts at 7PM. This is where WWE has a number of commentators getting you ready for Extreme Rules. Going over the matches, giving some predictions and such. There is also a pre-show match, which is likely going to be Live Morgan vs Carmella – the only non-championship bout of the card.

The full-on show will start at 8PM ET. Typically, PPVs last until around 11PM. However, during the pandemic, the WWE did shorter PPVs, and the fans loved it. So it might actually end around 10:30 instead. But with their being ten matches on the card, don’t be surprised if it runs past 11PM ET.