The 2021-22 College Football Season has already kicked off, with a few games last week. But the bigger games start this week, on September 4. And for the first time in almost two years, games will be played in front of a live crowd. Which is a big deal for college football. Especially in stadiums like State College for Penn State, The Big House for University of Michigan, or in Tuscaloosa for Alabama. Some of the loudest and biggest stadiums in the country. It’s definitely going to be electric this year.

And you won’t want to miss a minute of the action, leading up to the College Football Championship happening on January 7, 2022. Along with all of the upsets along the way. So here’s how you can watch this season’s action without cable.

How To Watch College Football

The majority of all college football games are broadcast on ABC, NBC, CBS, FOX, ESPN, FS1 and NBCSN. Now there will be some smaller schools on other networks like the Big 10 Network, SEC Network and the ACC Network as well. And we’re going to tell you the best places to watch College Football for the 2021-2022 season.

Hulu Live TV is a really great option for watching the 2021-22 College Football Season. It does come with a 7-day free trial and after that, it’ll cost you $54.99 per month. It is actually still one of the cheaper streaming services out there, considering how many channels it has.

You’ll also get your locals included with Hulu Live TV. Making it a really great option for a lot of people. Hulu Live TV also includes 50 hours of Cloud DVR with every account, and you can upgrade that to 200 hours.

YouTube TV is one of our favorite streaming TV services, and there’s two good reasons for that. It offers a ton of channels, and it also has unlimited cloud DVR space. So you can record as many shows and episodes as you want, without worrying about your DVR getting full.

The service is steadily adding more channels to its offering, and with that does come price increases. But at $50 per month and over 70 channels, it is a pretty good value. And for those looking to watch College Football in 2021, YouTube TV offers a ton of the channels that the games will be on.

Sling TV is the cheapest way to watch college football. However, since there are two base packages, you’ll have to choose from either ESPN’s networks or Fox’s networks. Unless you opt to get both Sling Orange and Blue for a combined price of $50 per month – still the cheapest though.

Sling Orange has ESPN’s suite of networks, while Sling Blue has all of the Fox networks including FS1 and Big 10 Network. You can also add-on other packages here to get more sports channels. But regional sports are not available here. 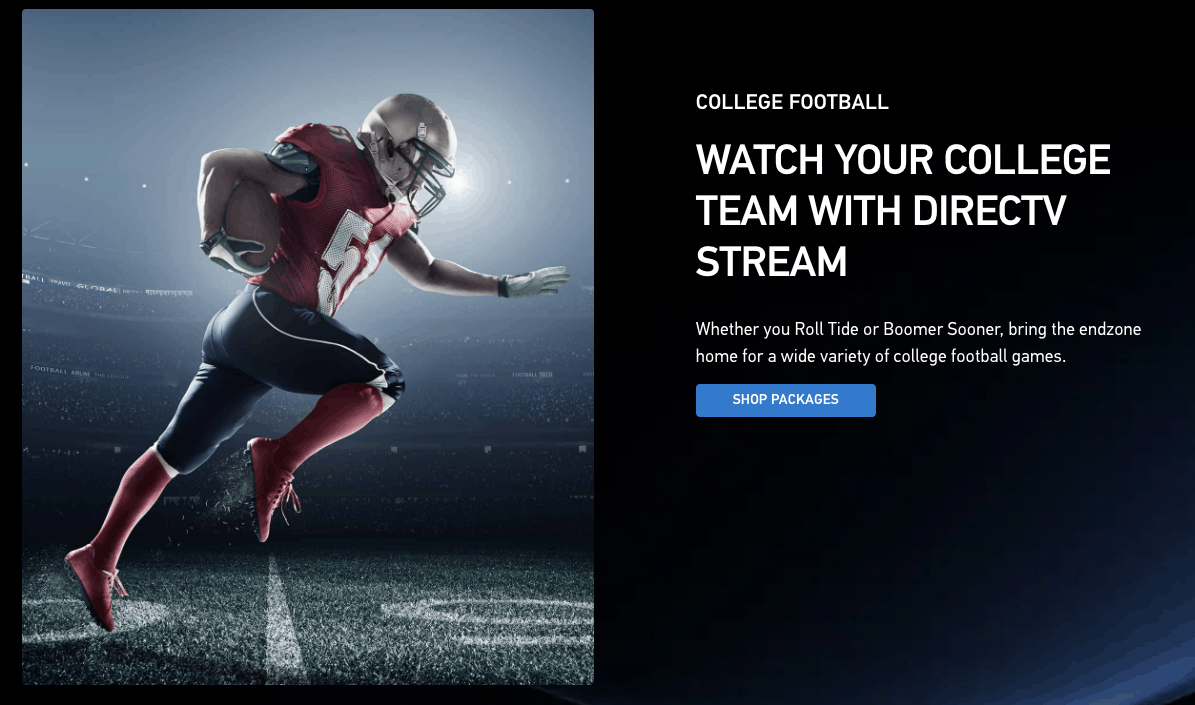 AT&T has rebranded its AT&T TV Now service to DIRECTV Stream now. And it’s actually a really good service for watching sports. Whether that’s college football or the NFL, or other sports. As it is the only one here with regional sports networks from Sinclair.

DIRECTV Stream has ESPN, ESN2, FS1, NBC Sports Network, TBS and TNT available. And you can upgrade to get FS2 included.

What networks are available with which streaming services?

We’ve gone over the basics for each of these streaming services. Now let’s go over which networks are available here. The basic channels are available everywhere, for the most part. But when it comes to the conference networks, these might differ a bit more.

Our pick for watching college football

As you can see, YouTube TV and Hulu + Live TV offer the best options all around for watching college football this year. And let’s not forget that YouTube TV also has great unlimited cloud DVR options available. So you can record the games as well.

Having unlimited cloud DVR is really useful, as you can have YouTube TV record every game from your favorite teams. That way you don’t have to worry about missing the beginning of the game, as you can start from the beginning when you do actually sit down to start watching.

The option that you pick is going to depend on what team(s) you watch. If they are bigger schools like Alabama, Notre Dame, Clemson, or USC, then you likely can watch them all on ESPN, and Fox. But if they are smaller schools like Northwestern, or Illinois, then you’ll need to watch on their conference network – in this case, the Big 10 Network.