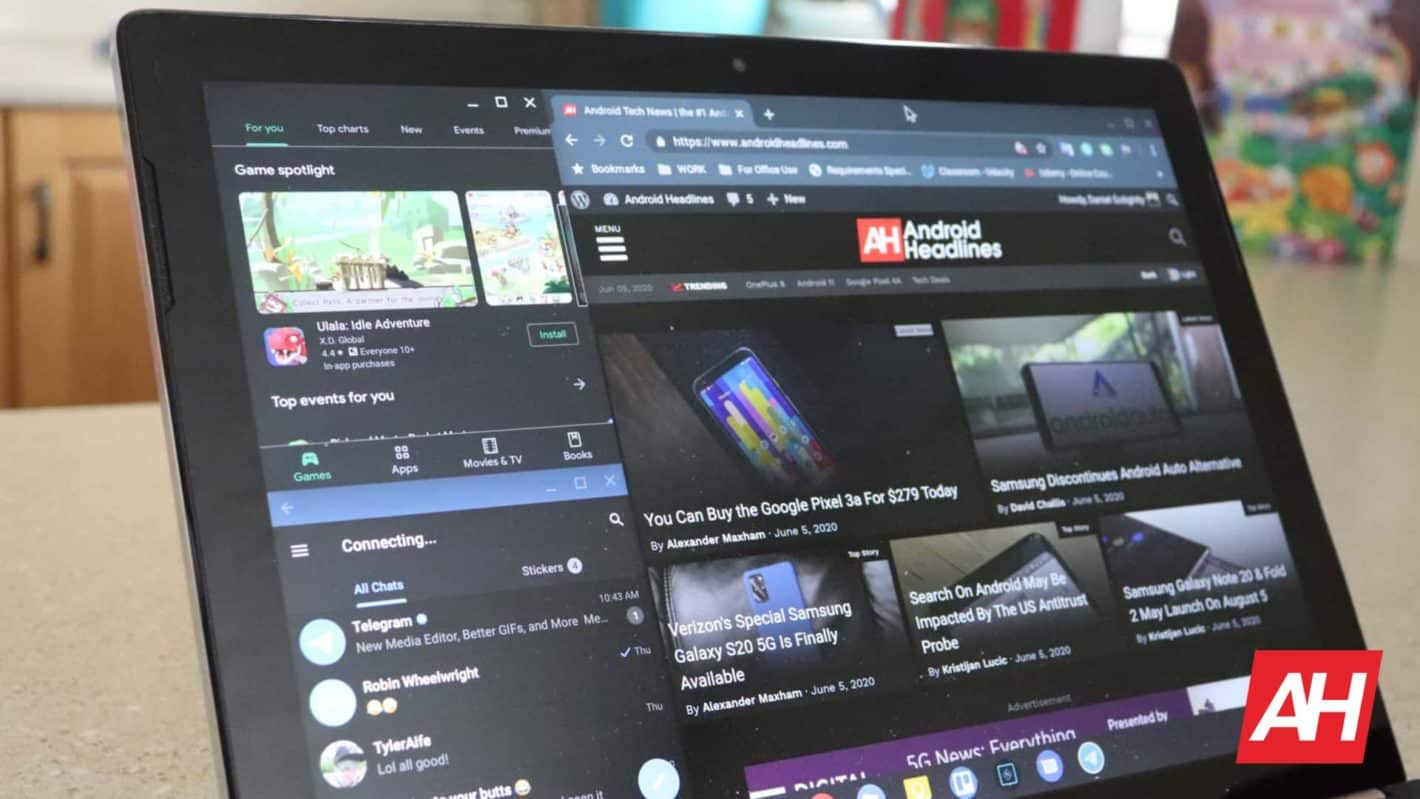 Multitasking on a Chromebook is a relatively easy process thanks to a wide variety of features but that doesn’t mean all of those are intuitive. Among those that some users might find less obvious, is how to move into a split-screen view on a Chromebook.

But, combined with other productivity-focused features such as overview mode — which now includes and supports virtual desks — it’s definitely worth taking the time to learn how to do it.

Here, we’ll explore exactly how that’s done on a Chromebook or other Chrome OS gadgets.

Now, there are two ways users can learn how to enter split-screen on a Chromebook or Chrome OS device. Each is relatively straightforward and, to an extent, at least one should be familiar. But we’re here to see how those tasks are performed. So let’s dig in without further ado.

Move those windows manually or with on-screen cues

The first method for using split-screen on a Chromebook is likely to be the most familiar to users. And that’s because it’s the same method used on Windows, for example. As well as some other operating systems.

Namely, users can click and hold in an empty area within the top bar of the desired app. In our case, for Google Chrome and that’s going to be the area between open tabs and the underscore, square, and “x” icons at the top-right-hand side of the window. This click and drag method, from the user’s perspective, is the same method used for simply moving the window around the screen.

From there, you can just keep holding while dragging the window or app to the right- or left-hand edge of the screen. The display will fill with a transparent white overlay to show where the window will be resized to. The effect will be similar to that shown in the less intuitive method, laid out below and shown in our sample images. Then a second window can be moved into the opposite side of the display for a true split-screen experience.

We’ll be showcasing a less intuitive method here, for clarity. Or at very least a method that’s less intuitive until it’s been learned. As well as ways to interact with the split after it’s been formed. 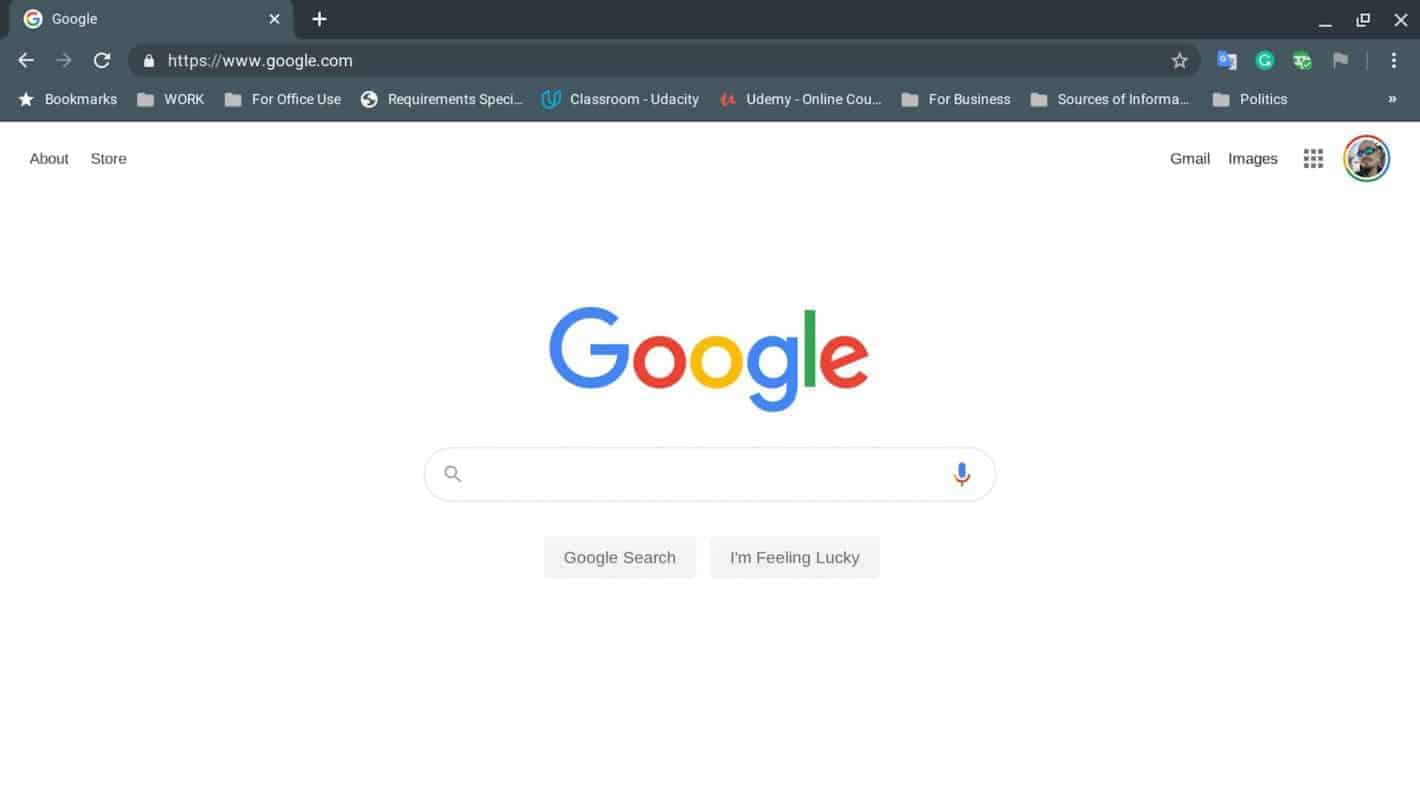 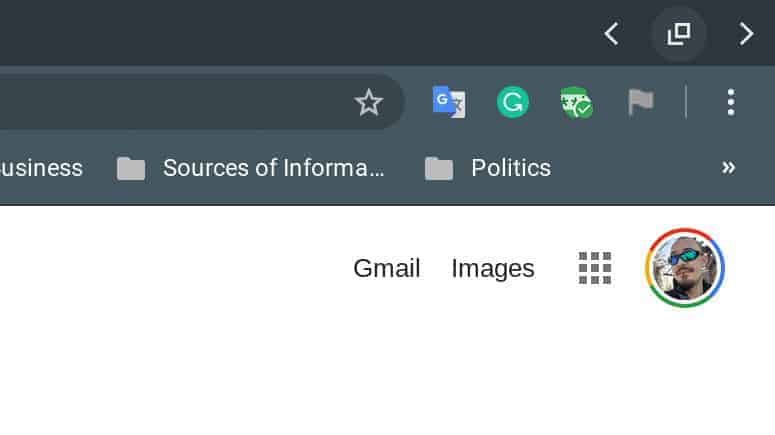 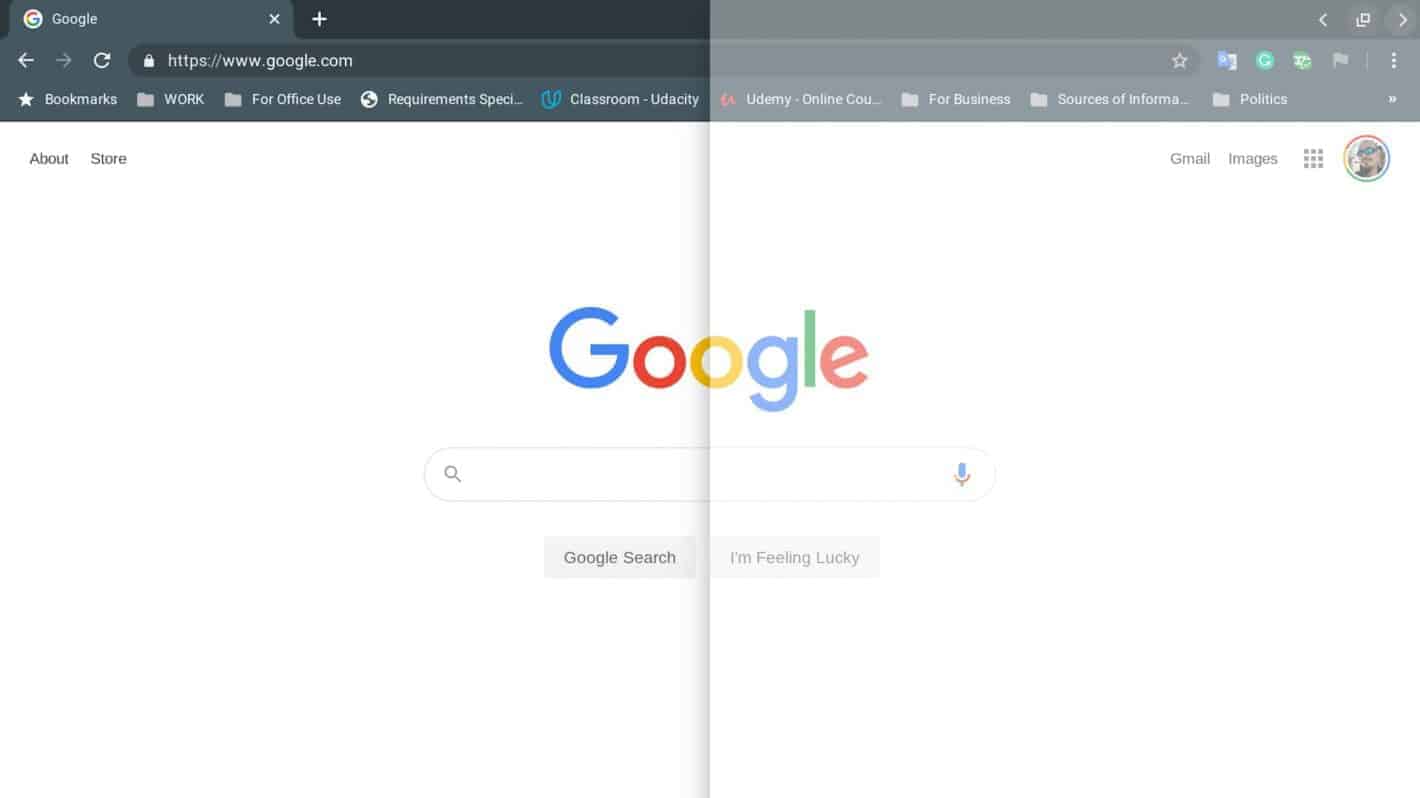 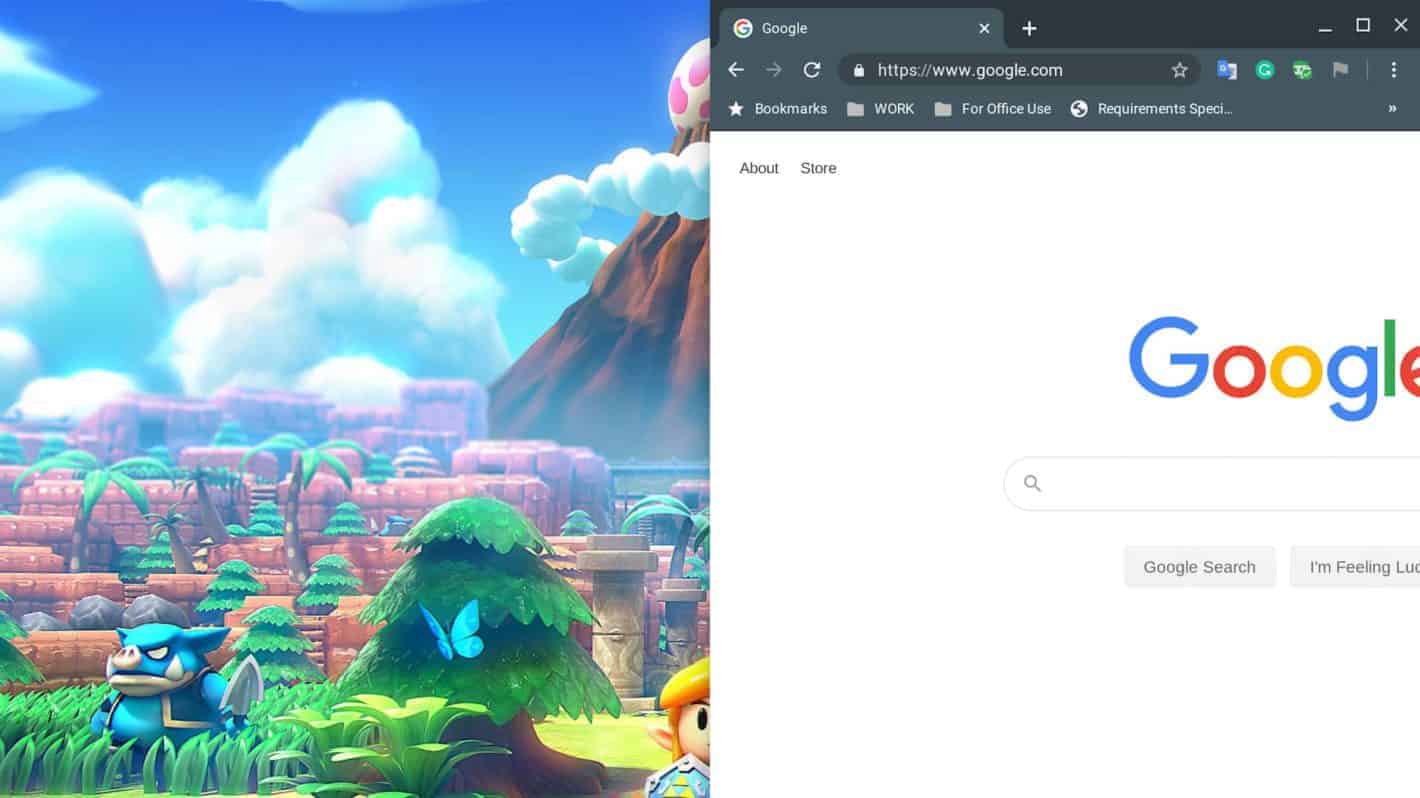 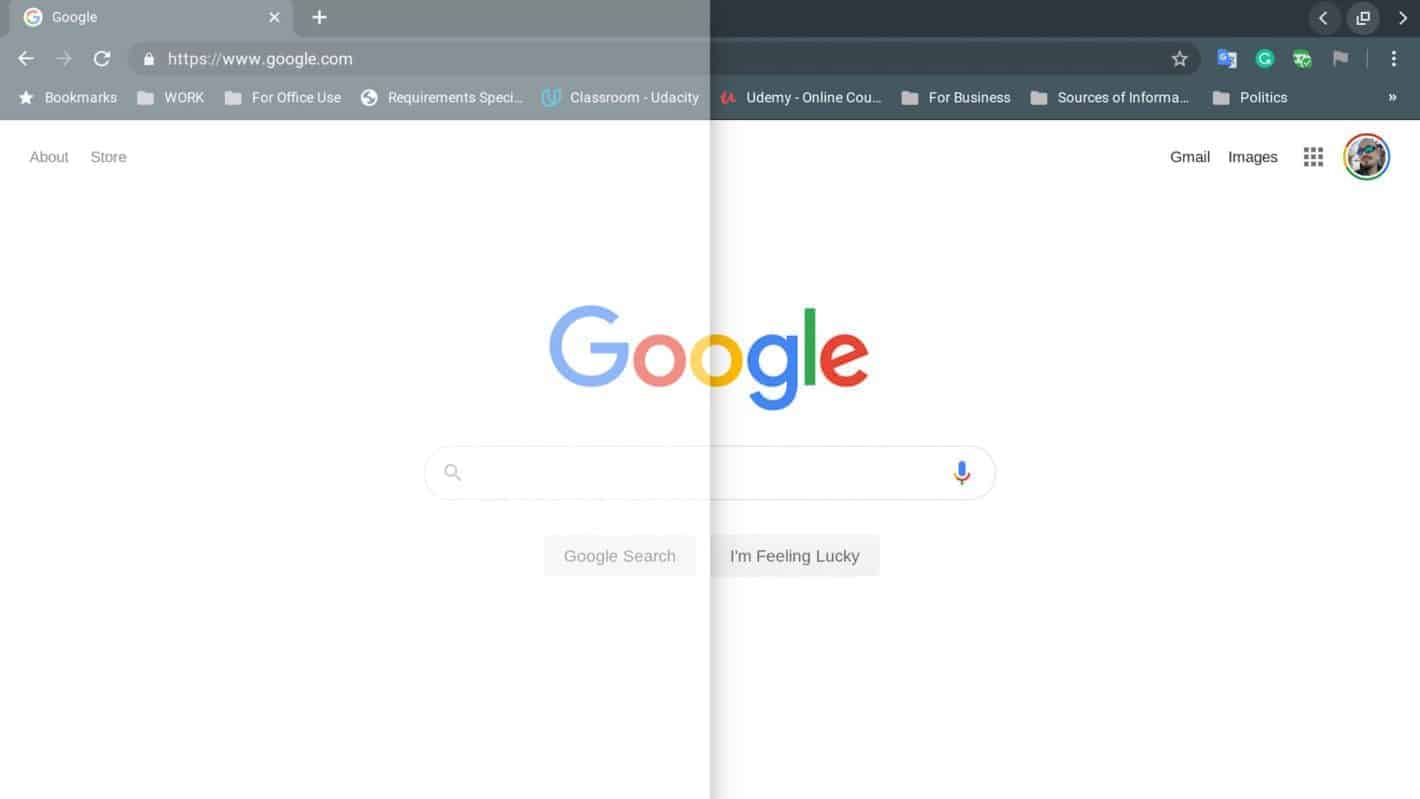 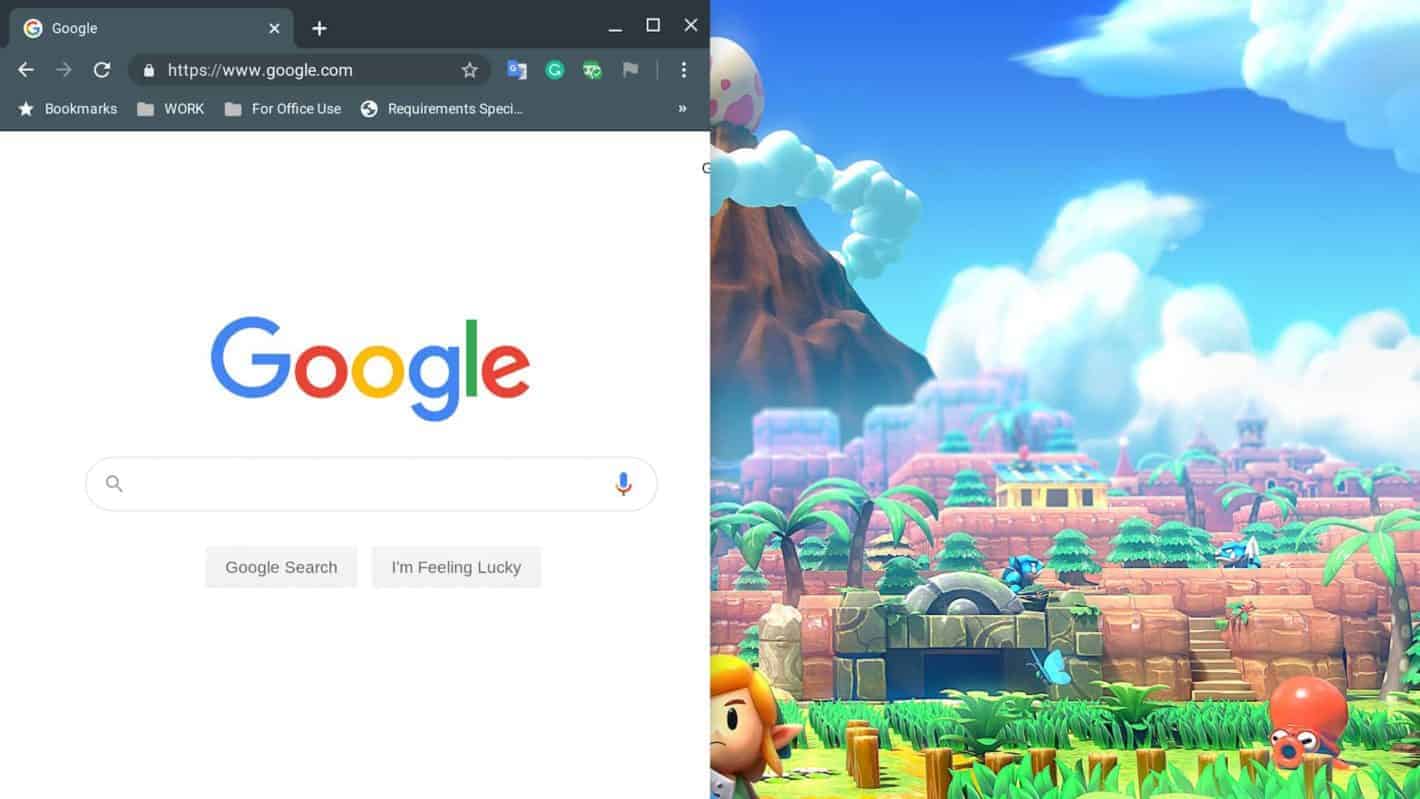 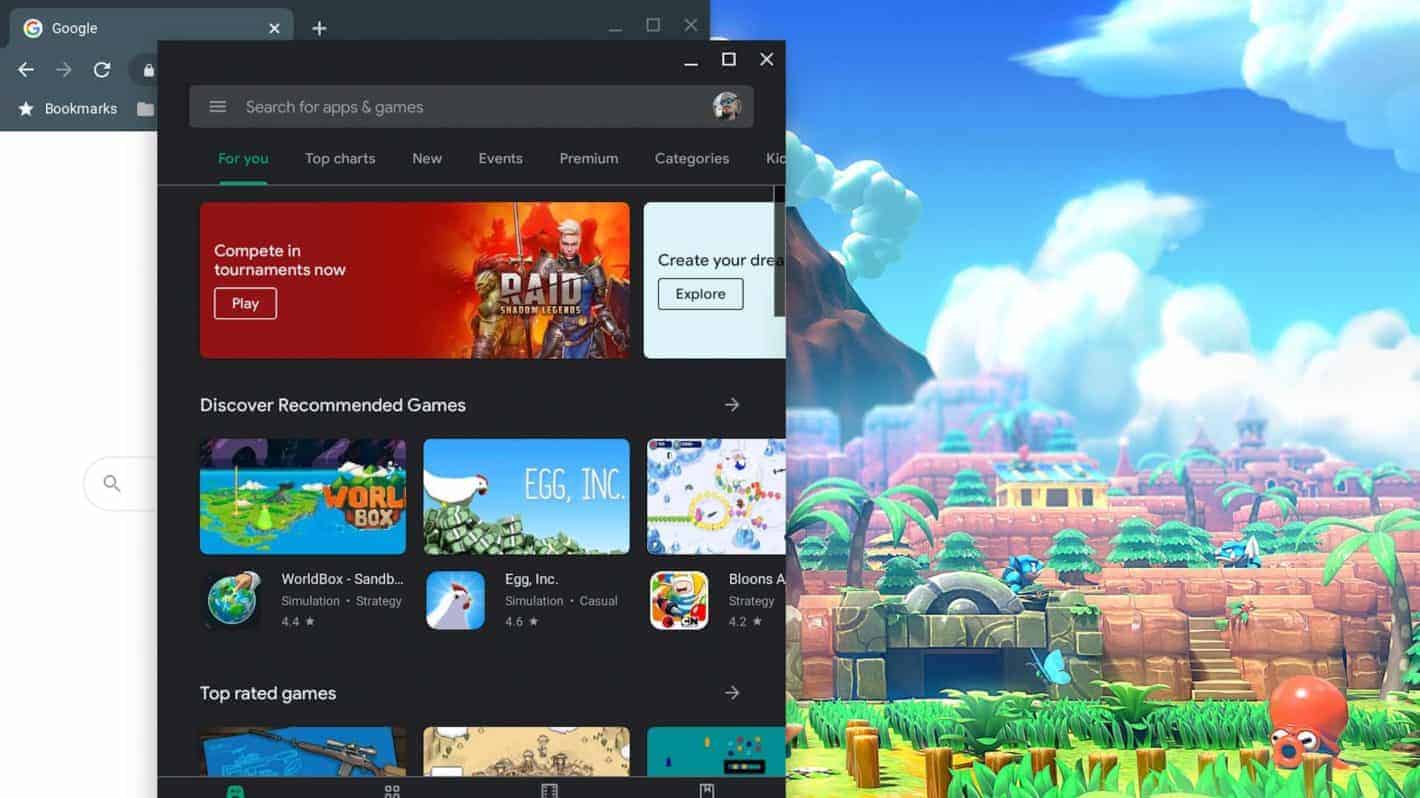 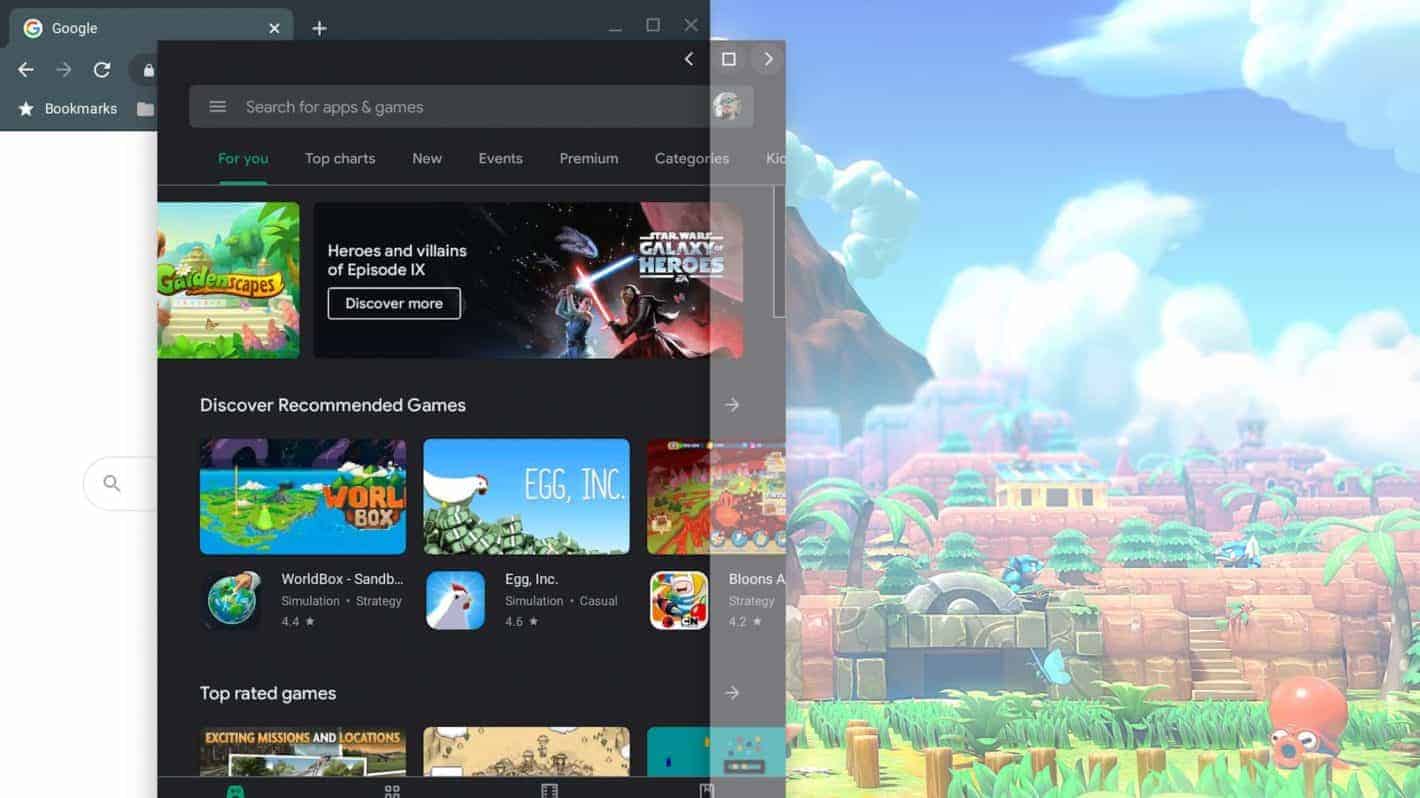 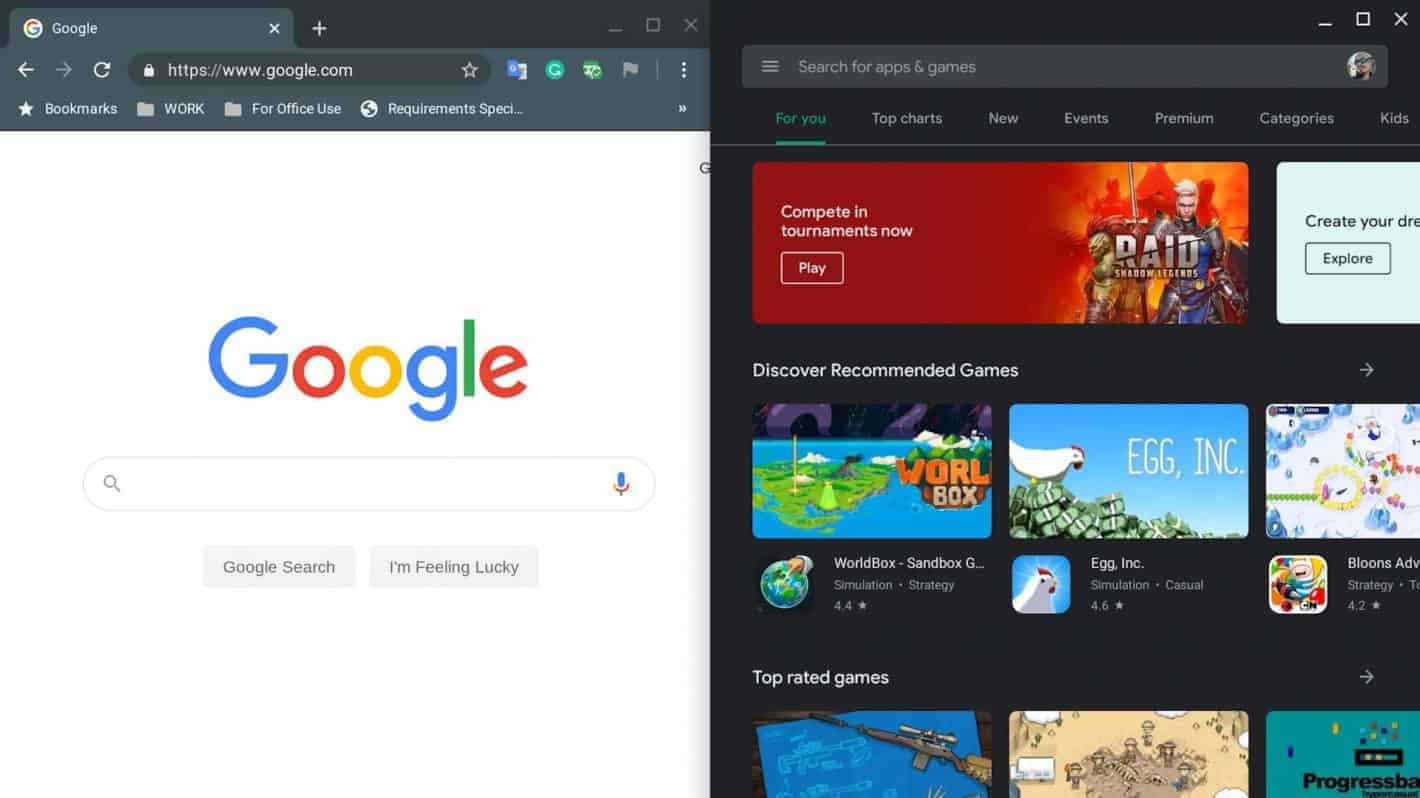 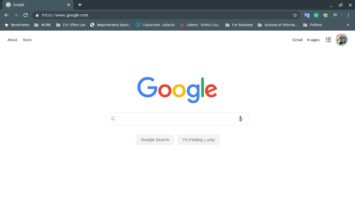 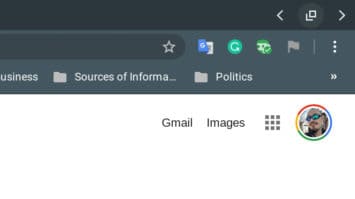 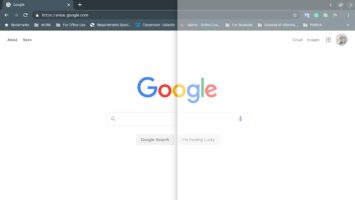 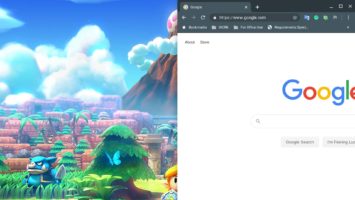 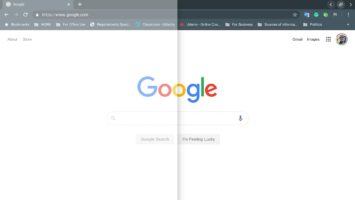 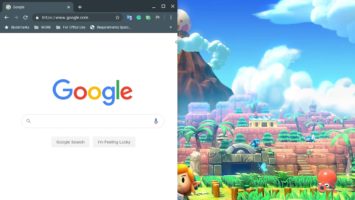 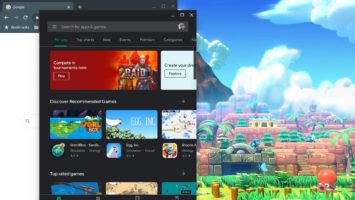 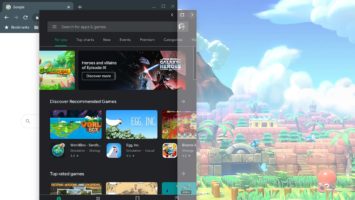 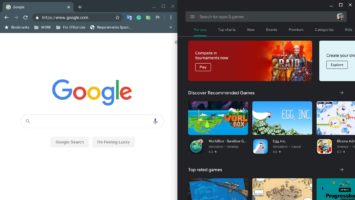 How do you interact with the split-screen mode after placing the windows on your Chromebook?

Now, to get the most out of your split-screen experience on your Chromebook, it may not be best to simply leave the windows at their default size. And our example provides a prime example as to why that is the case.

Working on multiple documents, spreadsheets, and similar types of projects is easy enough with a 50/50 split. In fact, that’s usually best for those types of work. But that won’t necessarily be the case for every app.

Chrome, as shown in the images above, really needs more than half a screen to be usable. Especially on sites with a wider content layout. Conversely, the Google Play Store really doesn’t need all of that real estate. Particularly since it’s a mobile app. So, generally speaking, it’s optimized for mobile-scale viewing. Additionally, many Android users will find a slimmer layout more familiar and therefore appealing.

The same holds true for just about any app. They each have their own optimal scale. Fortunately, the scale can be adjusted after snapping without having to resize each window individually in Chrome OS. So it’s easy enough to use just about any application at a more intuitive, useful scale without needing to spend a productivity-killing amount of time. 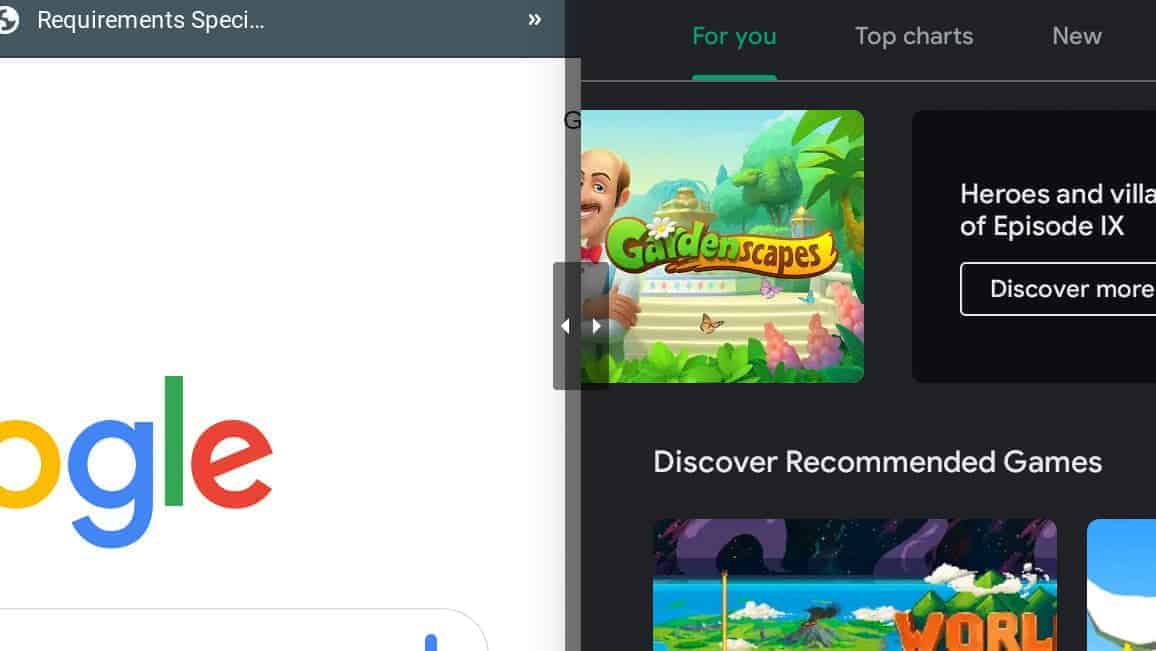 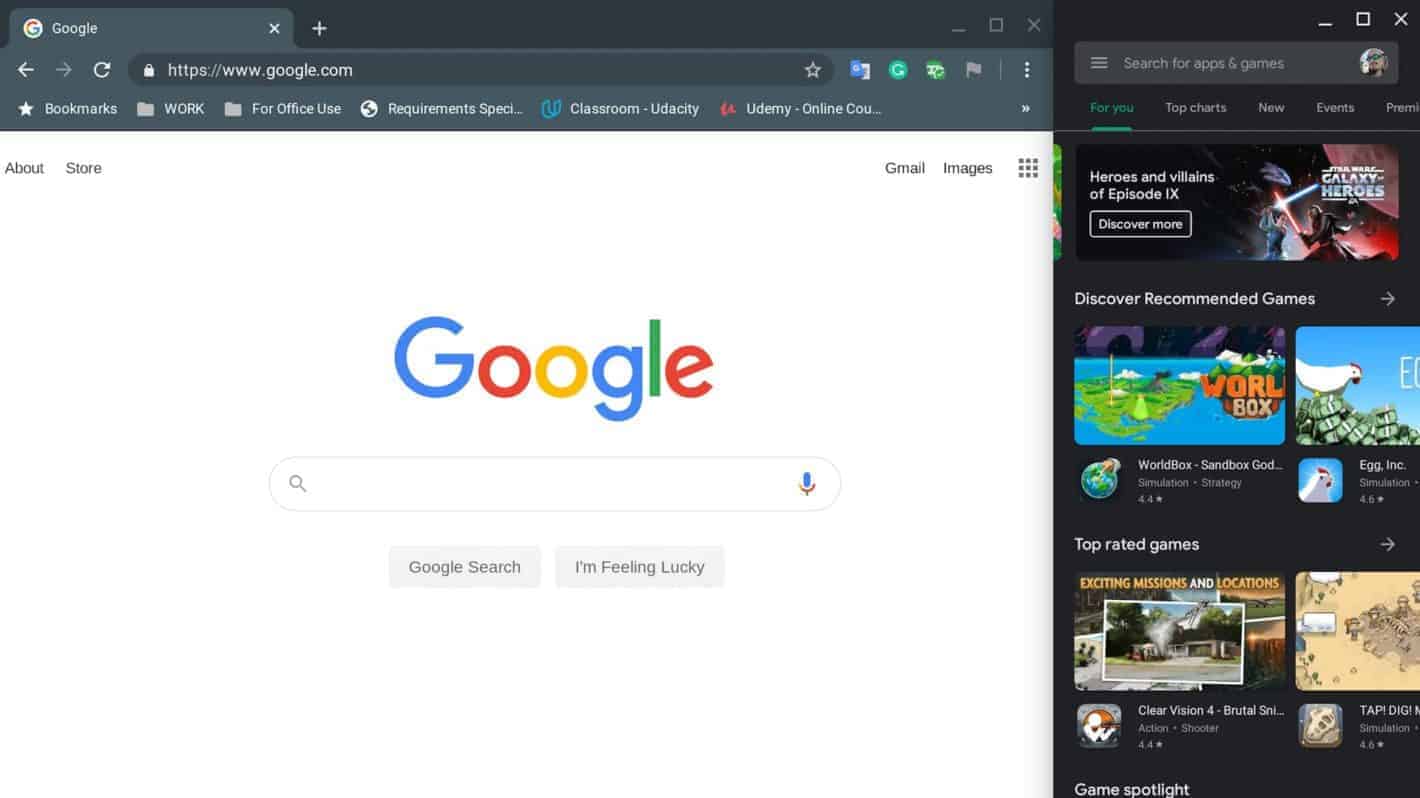 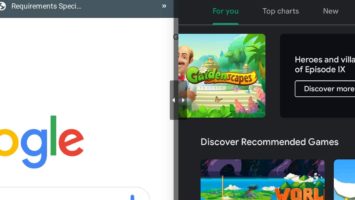 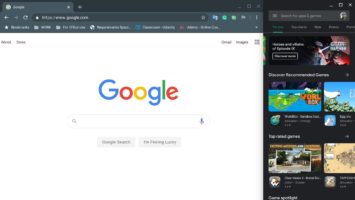