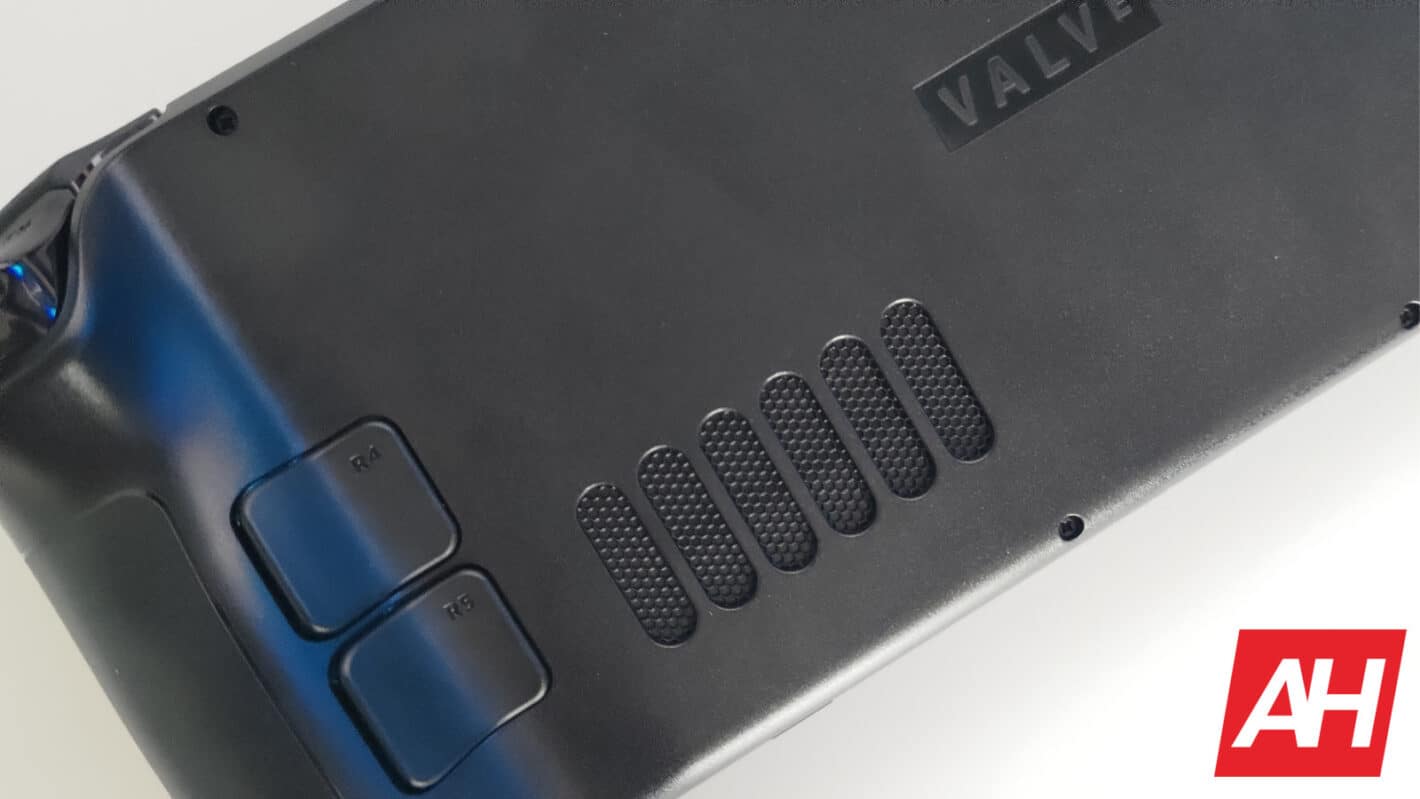 The Steam Deck is loaded with input options including four rear buttons. There’s also two bumpers, two triggers, two joysticks, two trackpads, a d-pad, ABXY buttons, and a touchscreen. To put it simply, there’s no shortage of ways to control your games and interact with the hardware.

But even with all those buttons, not every single game makes use of every single input. In fact most games aren’t set up to natively support the four rear buttons. Which means you’ll need to configure them by mapping in-game controls to them. Luckily, this isn’t a terribly lengthy process nor is difficult to do.

And if you’re picking up a Steam Deck or you already have one, you definitely want to consider configuring the rear buttons. They’re in a surprisingly comfortable position that makes pressing them really easy. Even for someone with smaller hands like myself. So, alleviate any worries that you’ll have to strain your fingers trying to stretch them across the back of the Steam Deck.

All that said, if you want to know how to set up the rear buttons on the Steam Deck, we’ll show you how. As we said, the process is fairly simple to do. And shouldn’t take you much time. Though your mileage may vary. If you’re like me, you sometimes find it hard to decide what to map to these kinds of additional buttons. So if anything, that’s where you’ll probably spend the most time.

How To Set Up The Rear Buttons On The Steam Deck

Though not all games will command the use of the rear buttons, some will definitely benefit from having access to them. To configure these, you’re going to want to get started by finding a game you want to play. 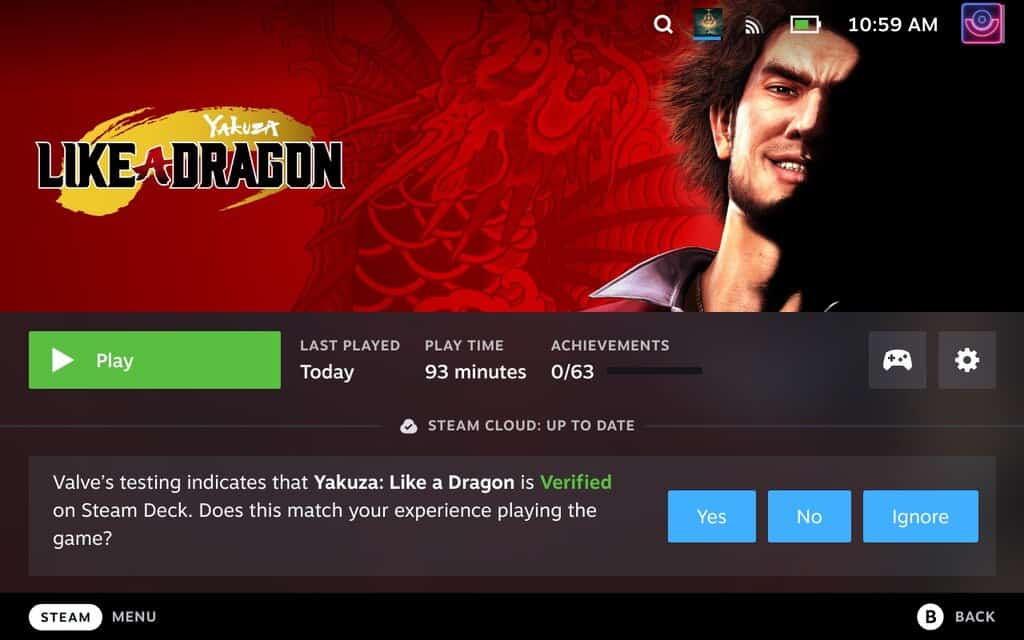 The first step to configuring these buttons is finding a game to play. Because you’re going to need to these up on an individual basis. Unfortunately, there’s no blanket method for getting these to work across the board. And that’s because the rear buttons don’t follow a typical controller layout.

While there are tons of controllers out there that feature these kinds of additional keys, most games only account for the front buttons as well as the bumpers and triggers on the top. So, if you want these set up for multiple games, you’ll need to go through this entire process for each one separately.

Once the game is booted up, press the Steam button 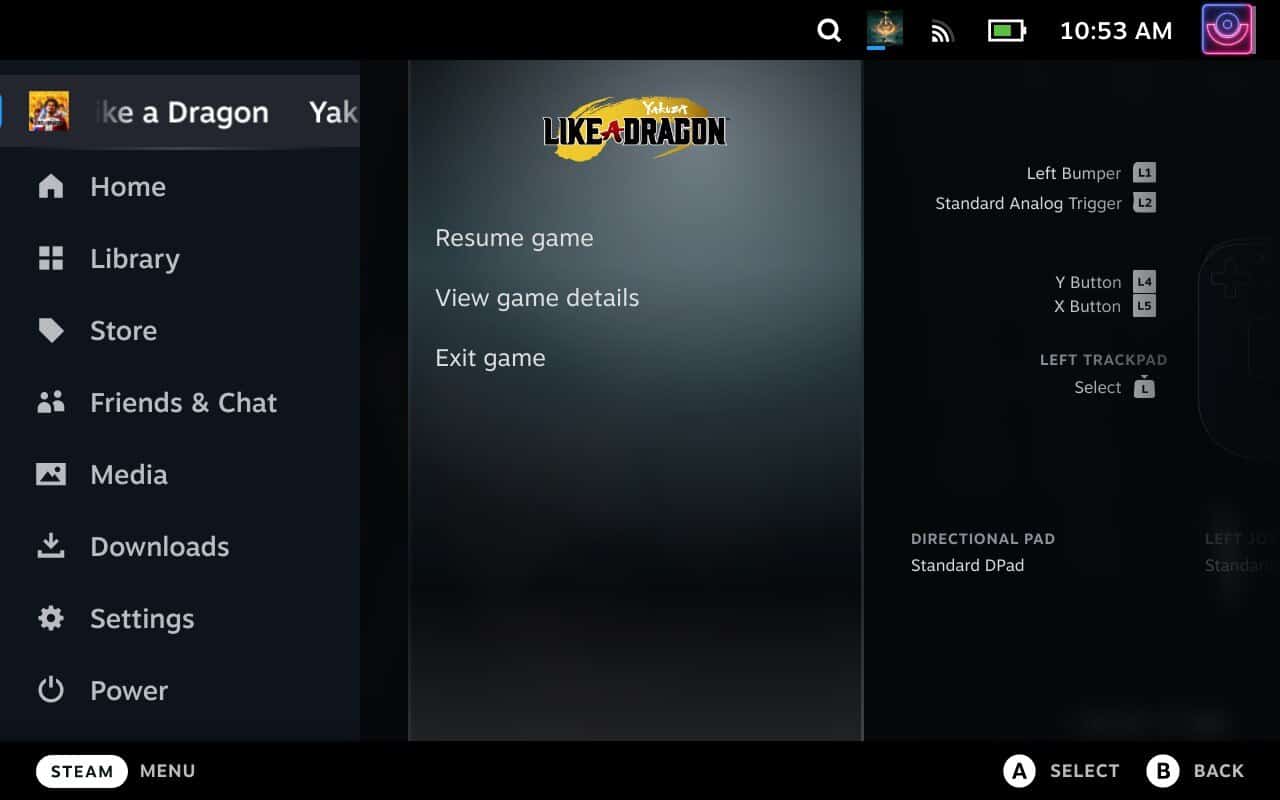 Once the game finishes loading, press the Steam Button. This will initially bring up the Steam menu. With options like Home, Library, Store, Friends & Chat etc. You’re going to want to immediately hit the right arrow on the d-pad twice as soon as the Steam menu opens up. This will take you to a screen that shows the default controller layout for the Steam Deck. 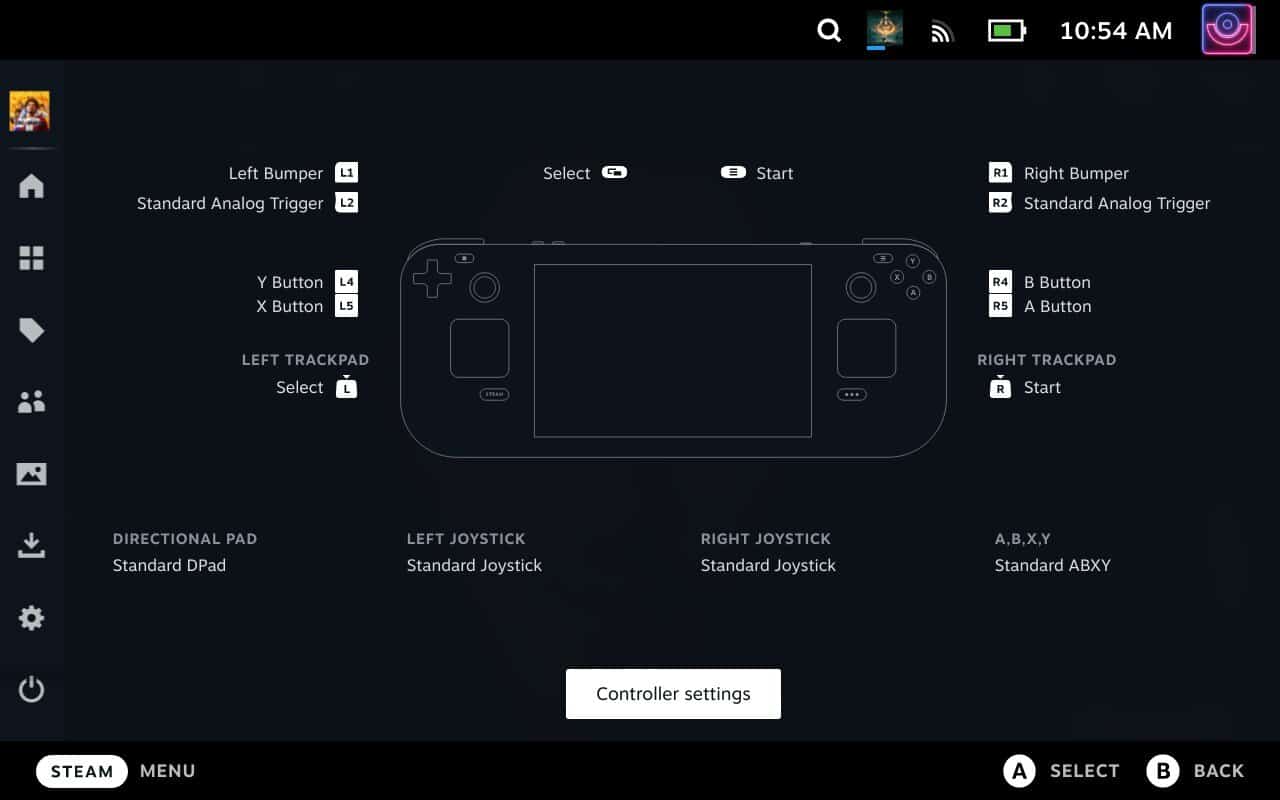 Down at the bottom of this screen, you’ll see a button that says Controller Settings. This takes you into the Controller Settings menu where you can adjust all sorts of things. Click this button to enter the menu. The button is already highlighted so all you have to do as soon as you hit this screen is hit the A button, and the controller settings for your chosen game will open up.

From this menu you can once again view the default layout. Which might be useful for deciding which controls to map to the L4, L5, R4, and R5 buttons on the back. 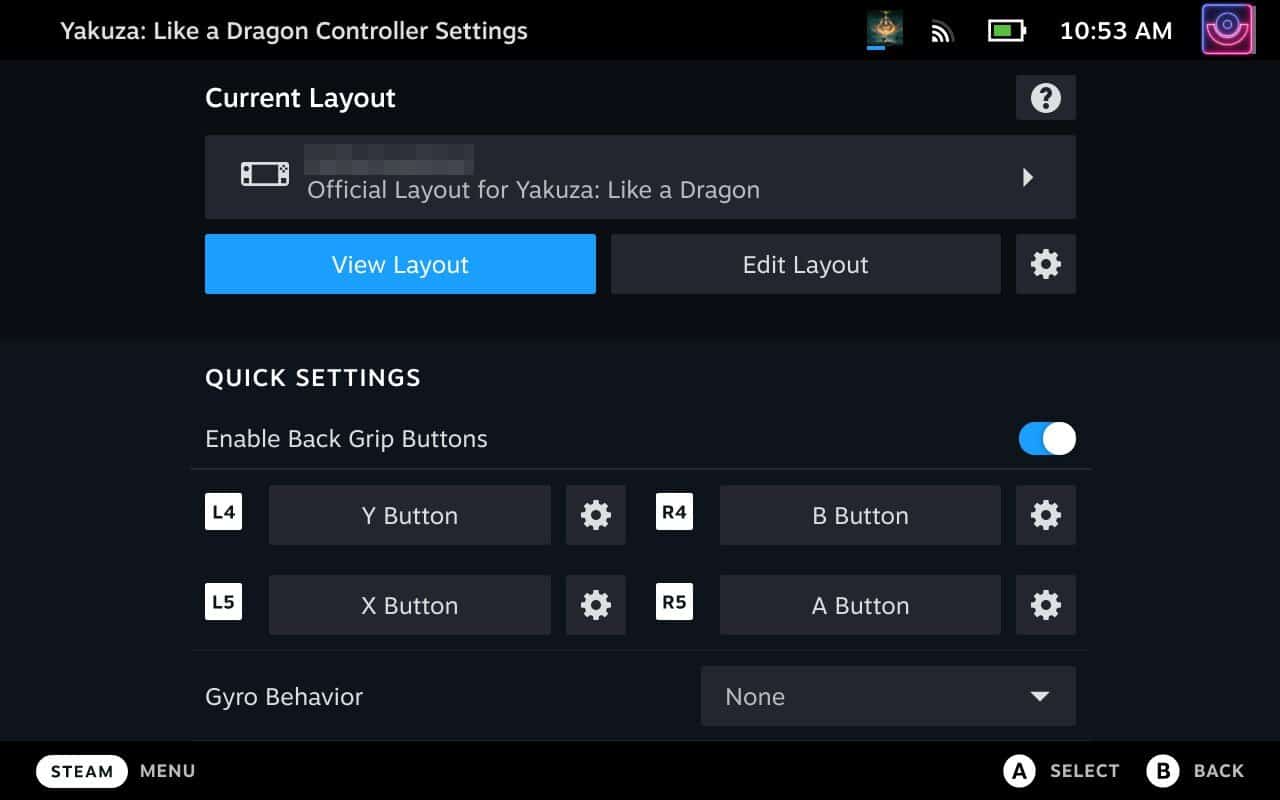 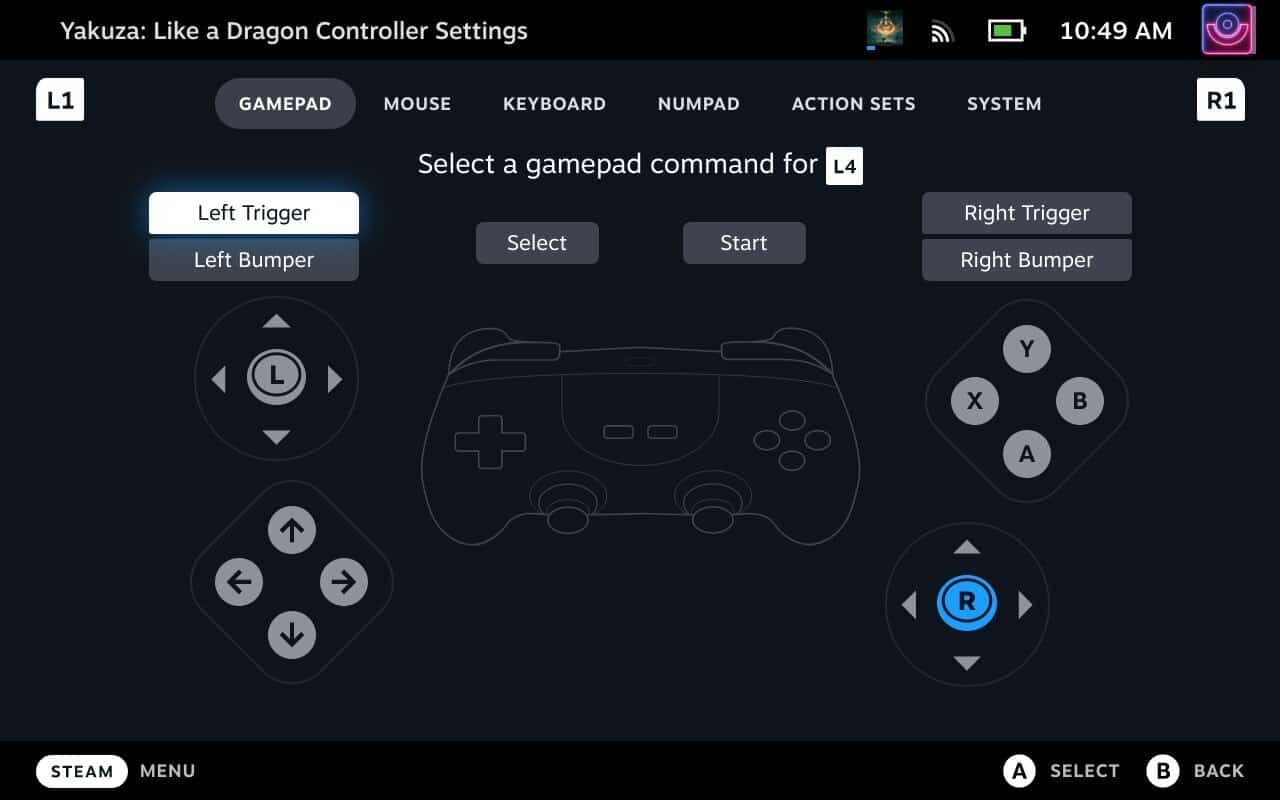 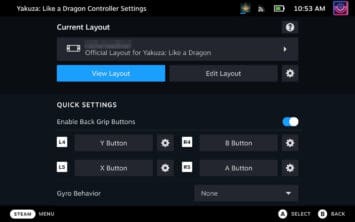 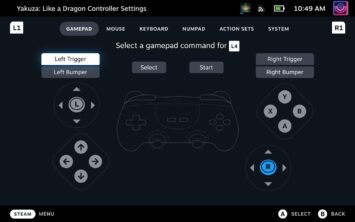 Now click the Edit Layout button to change things around. While you’re in there, you can make any other adjustments that you feel are necessary. Or, you can just configure the four rear buttons for the Steam Deck like you initially intended.

On the edit layout screen, you’ll see a number of pages. Each corresponding to a different section of the controls that you can adjust. Including buttons, d-pad, triggers, joysticks, trackpads, and gyro. The four rear buttons will be listed under the first set of controls in the Buttons section.

Scroll down to the segment listed Back Grips. Then edit each button to correspond to whichever controls you want. For example, the default controls for my four rear buttons in Yakuza: Like A Dragon are the ABXY buttons.

You can keep them like this, or you can switch the ABXY buttons out to utilize the bumpers and triggers if you prefer. Go with whatever feels most comfortable to you while playing. I personally like to leave them configured to the ABXY buttons.

Set up additional commands for each button 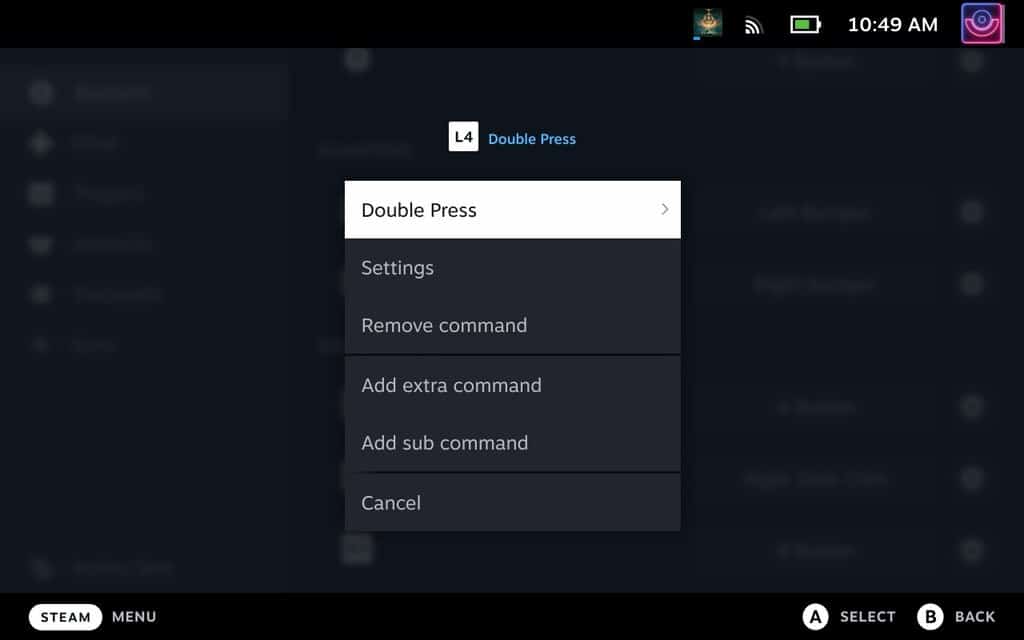 Even if you’ve already configured each of the four rear buttons to a command, you can still do more with them. By clicking on the larger button next to the corresponding input (L4, R4 etc.) you can select the main control. But if you click the cog button next to that there’s a whole other set of options.

Clicking this brings up an additional menu with options for adding extra commands or sub commands. So, you can click Add Extra Command and then pick another control to map to one of the four rear buttons. You can then also adjust this command to activate with things like a double press or long press.