Google’s Nest-branded cameras are easily some of the best around for the money but that doesn’t mean learning to set one a camera from the company up is necessarily intuitive. While, in fact, the latest run of gadgets is easier than ever to work with — we’ll cover that momentarily — that’s going to depend on your level of experience with technology. At least to a certain extent.

Moreover, the company doesn’t necessarily make the process clear in its initial explanations — or its initial menus. As is often the case with these types of guides.

So that’s what this article sets out to do. If you want to learn how to set up your new Google Nest camera for the first time, this guide can help.

Now, there are several additional advanced features included with a Nest camera but that’s not what this guide will discuss. And that’s not without good reason. Not least of all, how you set up your new camera will depend on what kind of camera it is, exactly. For older Nest cameras, the Nest app must be used. Then the camera can be added to the Google Home app for integration.

For the latest, battery-powered Nest cameras, the process is simpler. Only requiring the Google Home app, with direct and immediate integration and account linking. So, in fact, this guide is set into two parts. With the first serving as a start-up guide for newer devices and the latter for older ones.

Setting up other aspects such as activity zones or scheduling run times, conversely, is a separate process. This guide only looks at the initial setup process and moving the camera to a new or existing room.

Finally, this guide assumes that you’ve already plugged in — or charged and then placed, for wireless battery cameras — your Nest camera in a location that’s near to your router for initial setup. You can move the camera later on.

You’ll use Google Home if you have the latest cameras

Begin by opening up the Google Home app, then select the plus-shaped icon in the top left-hand corner of the UI. You’ll be presented with a list of options. But for this step, you’ll simply need to select “Set up device” to get started with your Nest camera. 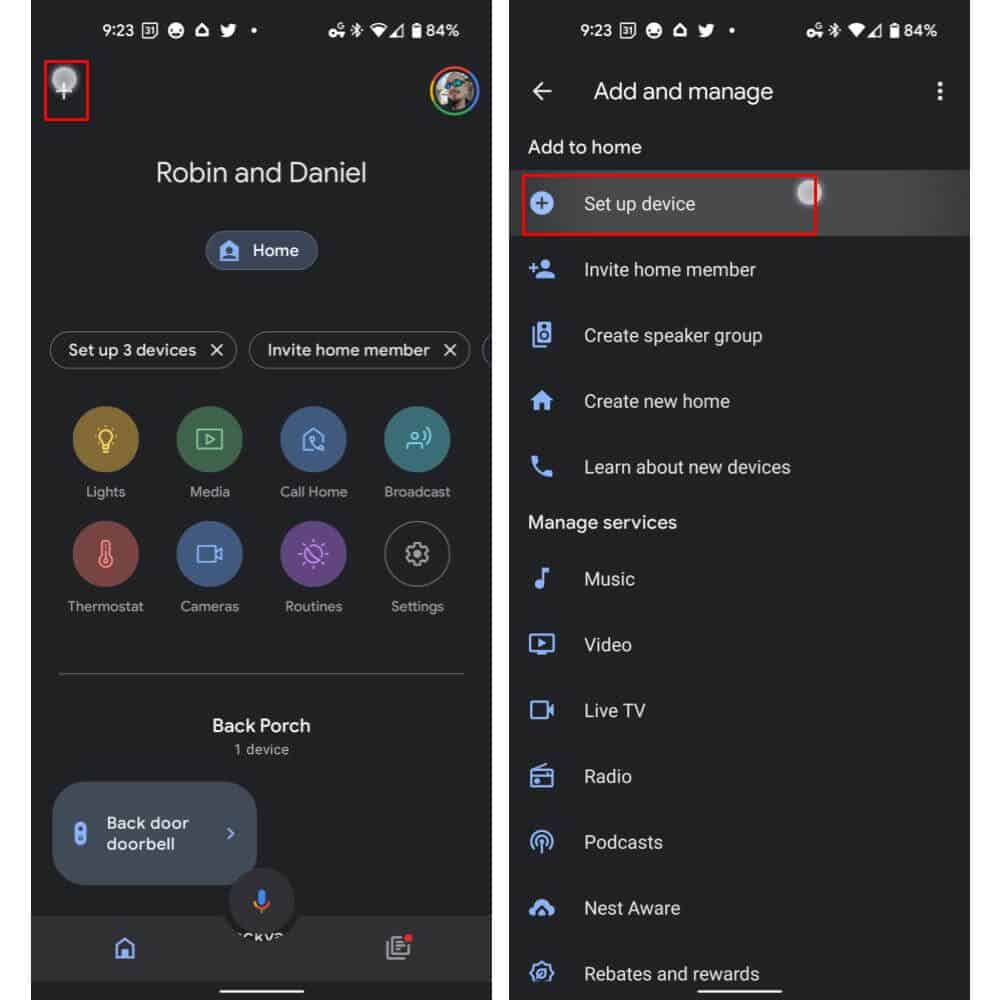 Google Home will present a list of homes you already have set up. If you don’t have one set up, select “Add another home” and follow that setup process. Then select “Next.” 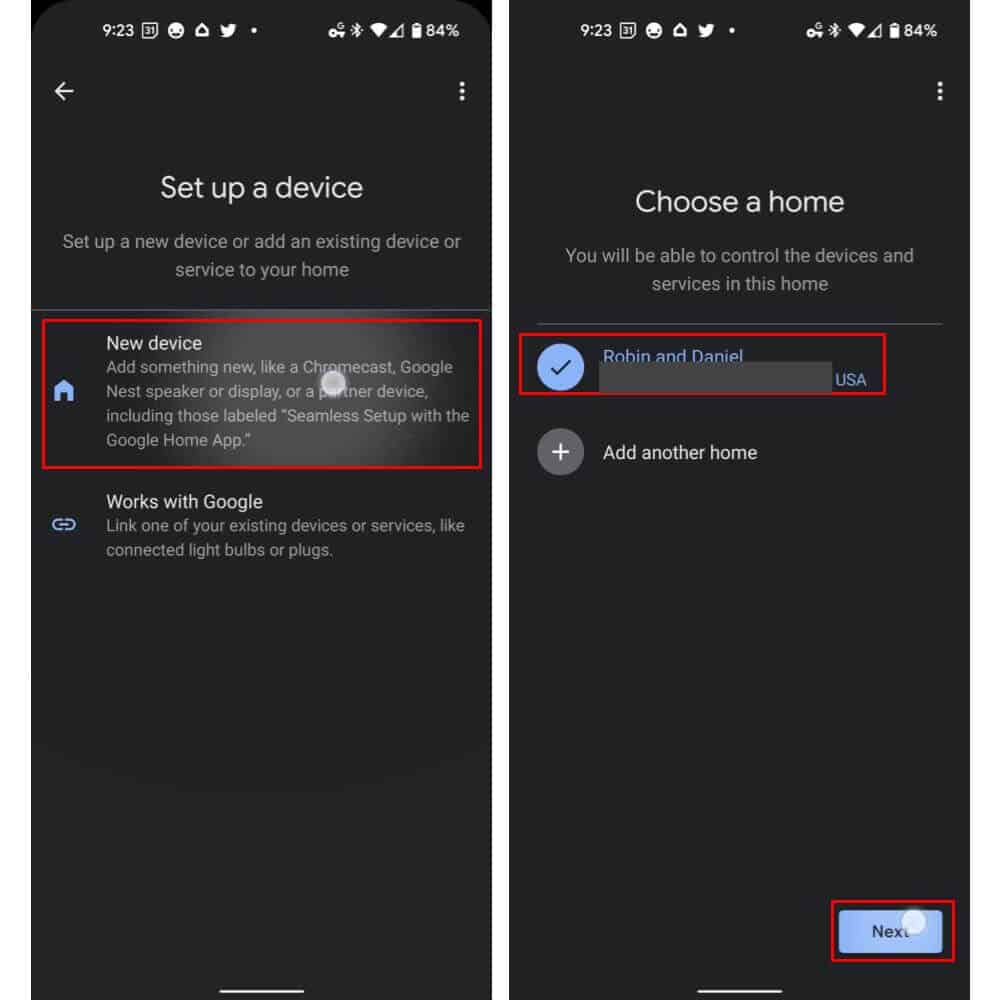 Home will show a list of recognized devices waiting to be set up. Your camera shouldn’t appear on the list. But if it does, select it before selecting “Next.”

Otherwise, select “Set up a different device” and then “Camera” from the following page. 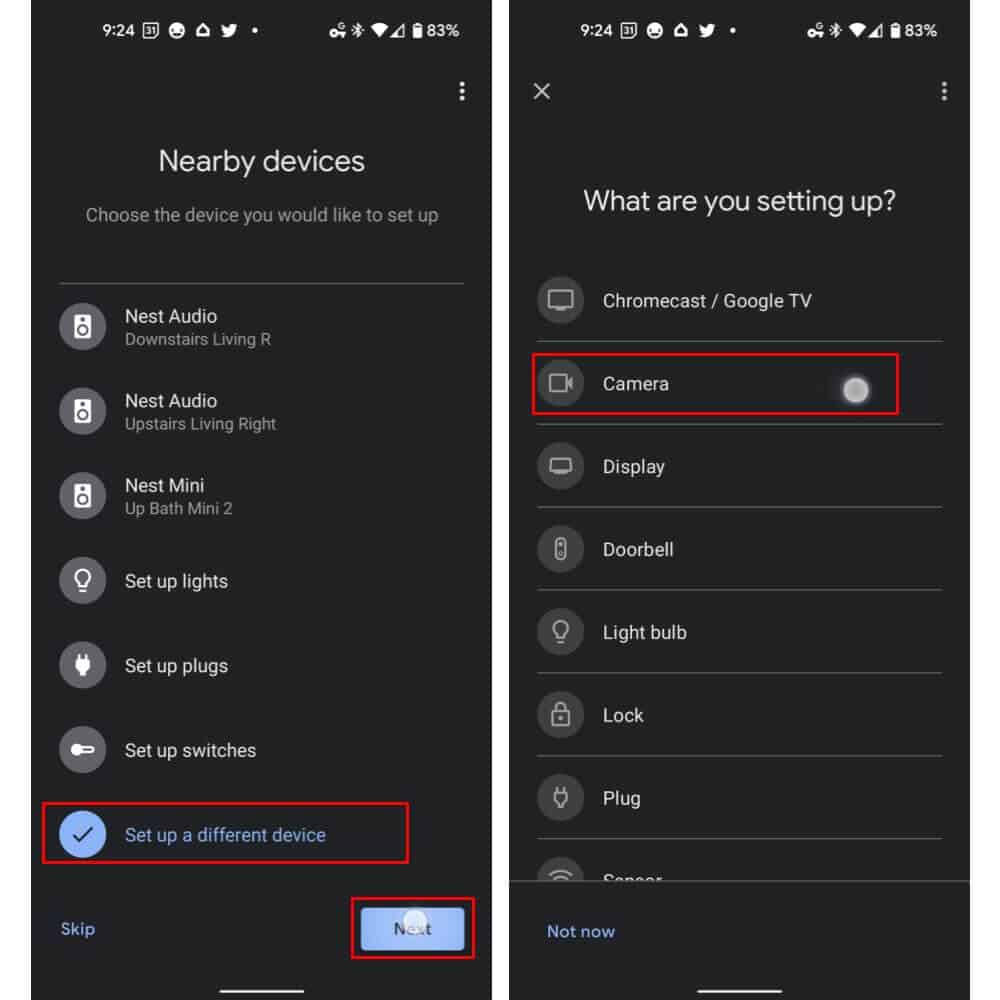 Select the type of camera you’re setting up. Then choose one of the top two options to grant temporary access to your camera. The camera is the most convenient way to complete the initial setup. 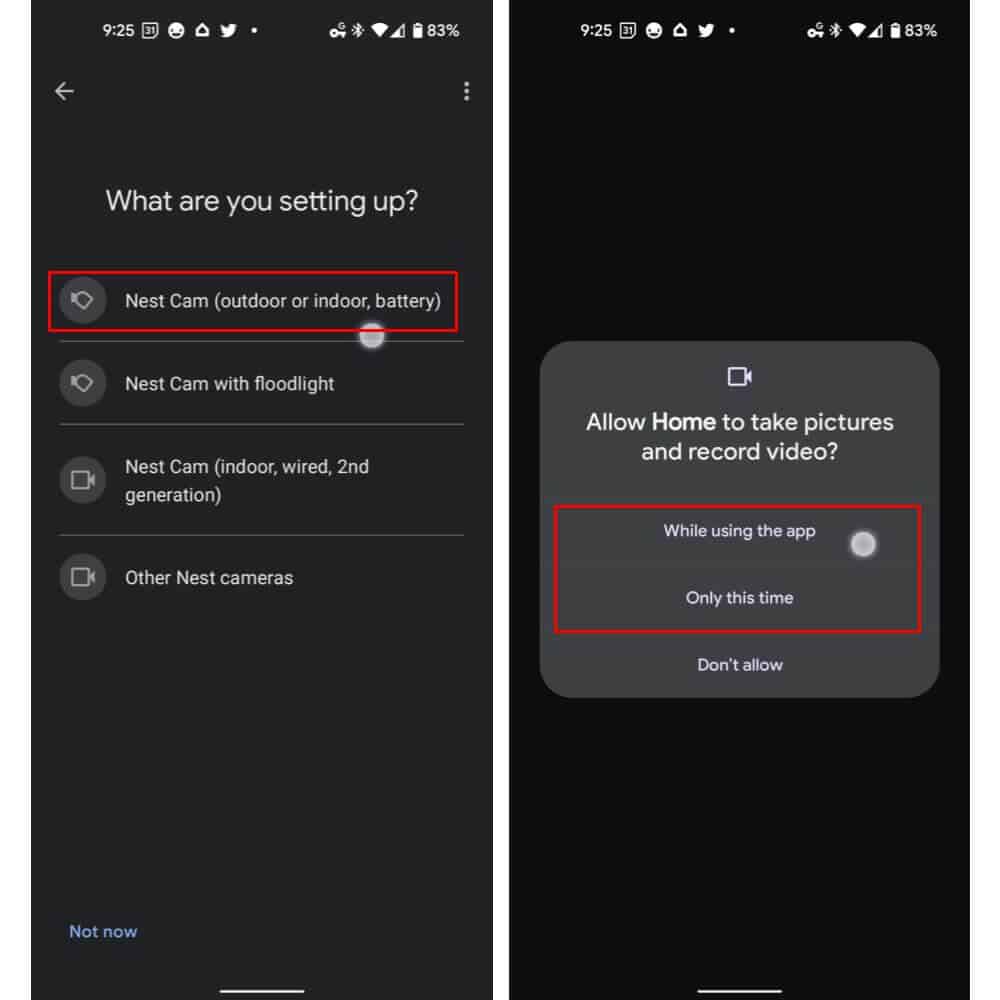 Next, you’ll need to scan the QR code included with your camera. That’s typically found on the front, on a sticker. If you don’t have the code — we didn’t for this guide — turn the camera over and look for a code shown in the place highlighted in the image below. Then select “Continue without scanning.”

Enter the six-digit code found on the back of your camera. 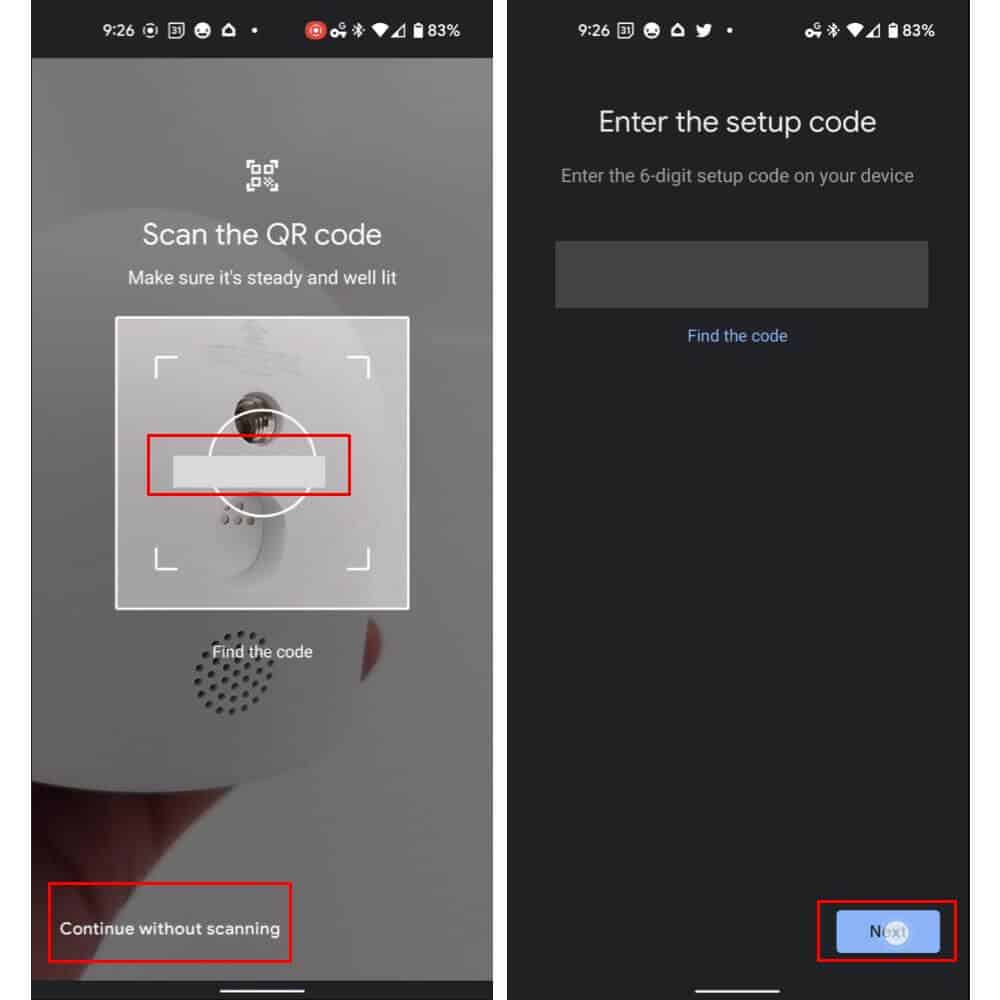 Select your camera from the options shown, then select “Next.” Follow the steps shown on-screen in the app. 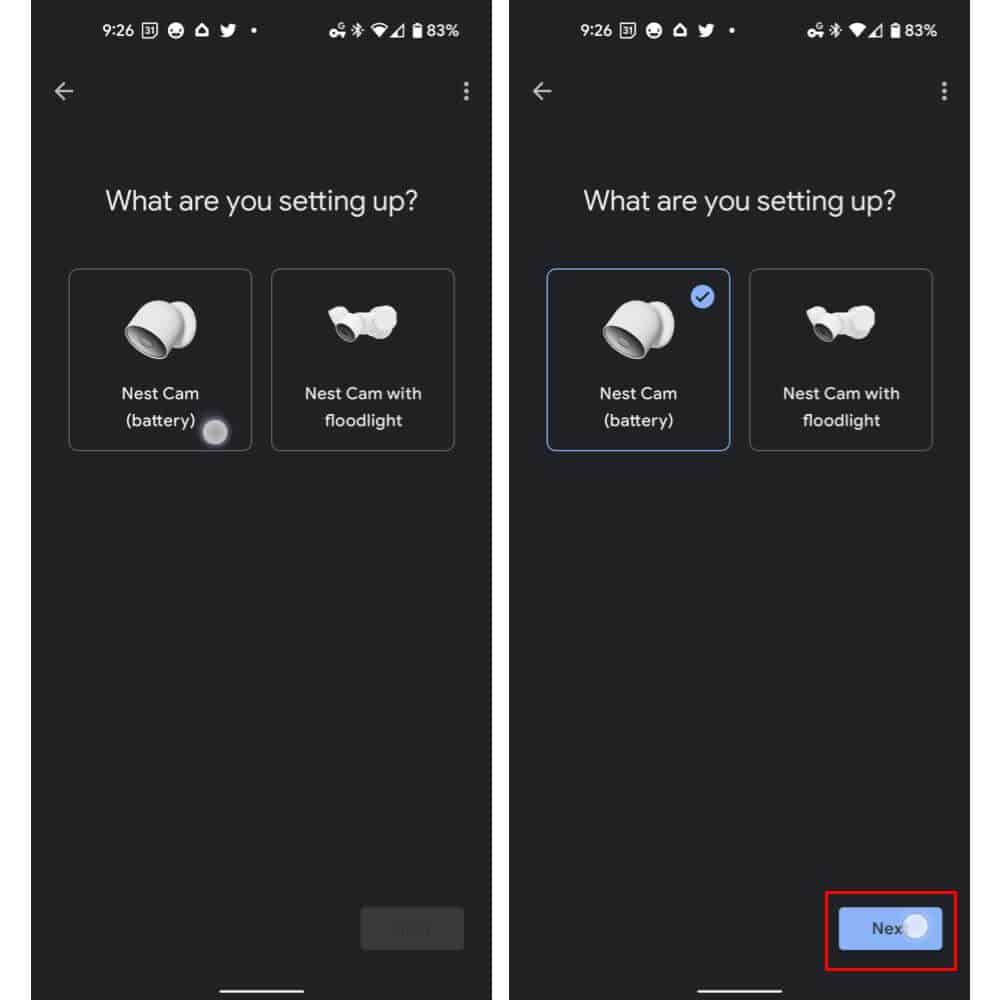 When you come to the page titled “Where is this device?” you’ll be ready for the next step. Scroll through and select a room or area that you’ve already created in your home for the camera. Or, you can scroll through to the bottom and create a new room.

The room represents a virtual placeholder, designating where, in the home or outside of it, the camera will reside. We already had a “Driveway” room setup, so we choose that option in our sample images. 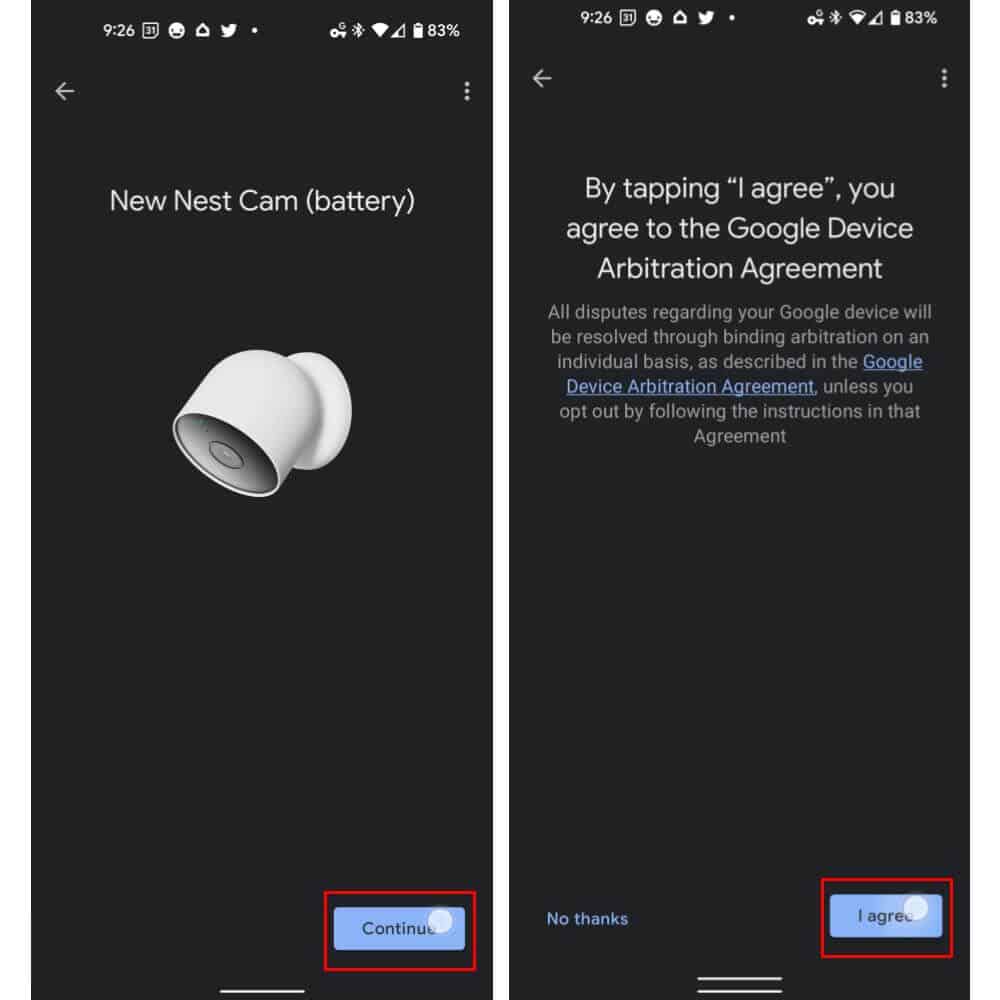 Follow the remaining steps of the wizard shown on your smartphone or tablet screen in the Google Home app. 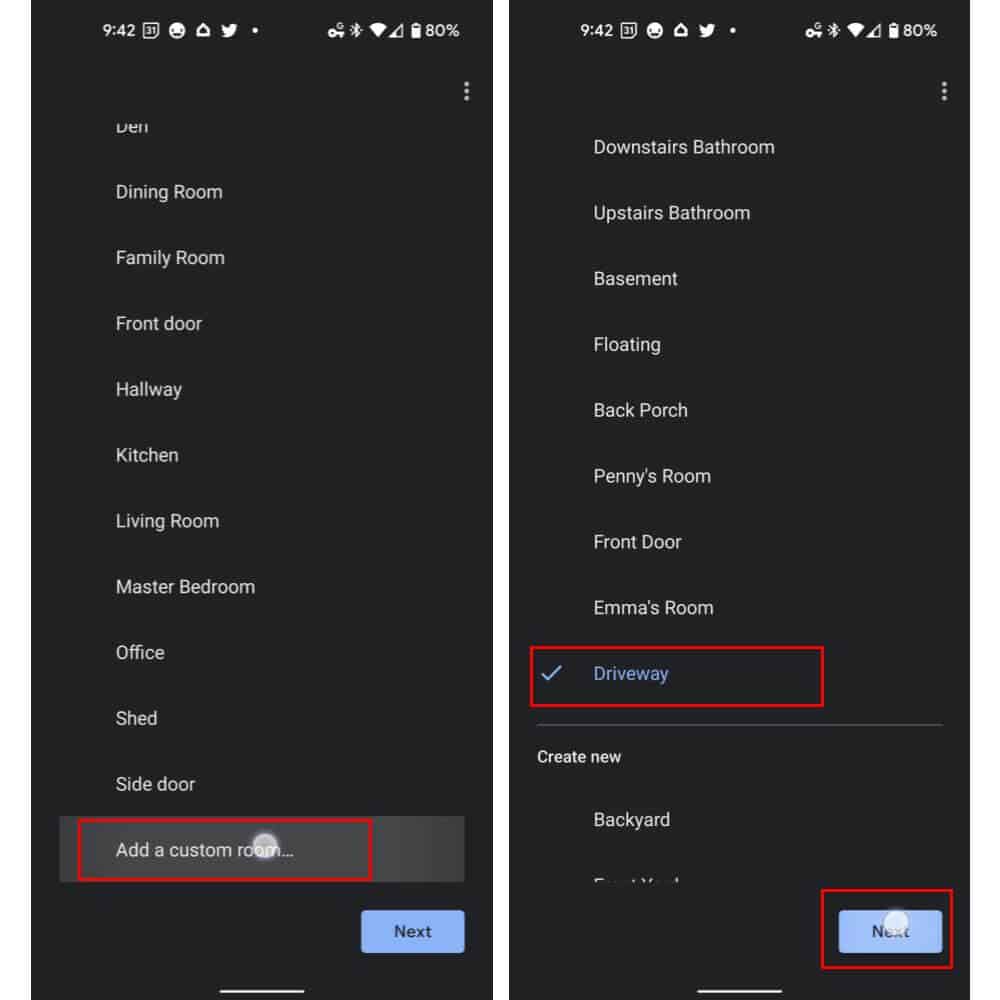 But older gadgets still rely on the Nest App for setup

Now, the process will be functionally identical for you if you’re looking for how to set up an older Nest camera. The primary difference will be in the initial steps. Namely, in adding the camera, to begin with. But as you’ll see in our images here, everything else is basically the same. And the same will hold true for adjusting deeper settings after the initial setup

For that reason, this segment of the guide will focus on showing how to add the camera, in the first place. And since none of the newest Nest cameras in the past several years use this setup.

Start by opening up the Nest app. Once loaded up, navigate to the main Settings menu by tapping to select the gear-shaped Settings icon. Unlike the Google Home app, the UI to add a new camera is not on the home page itself. 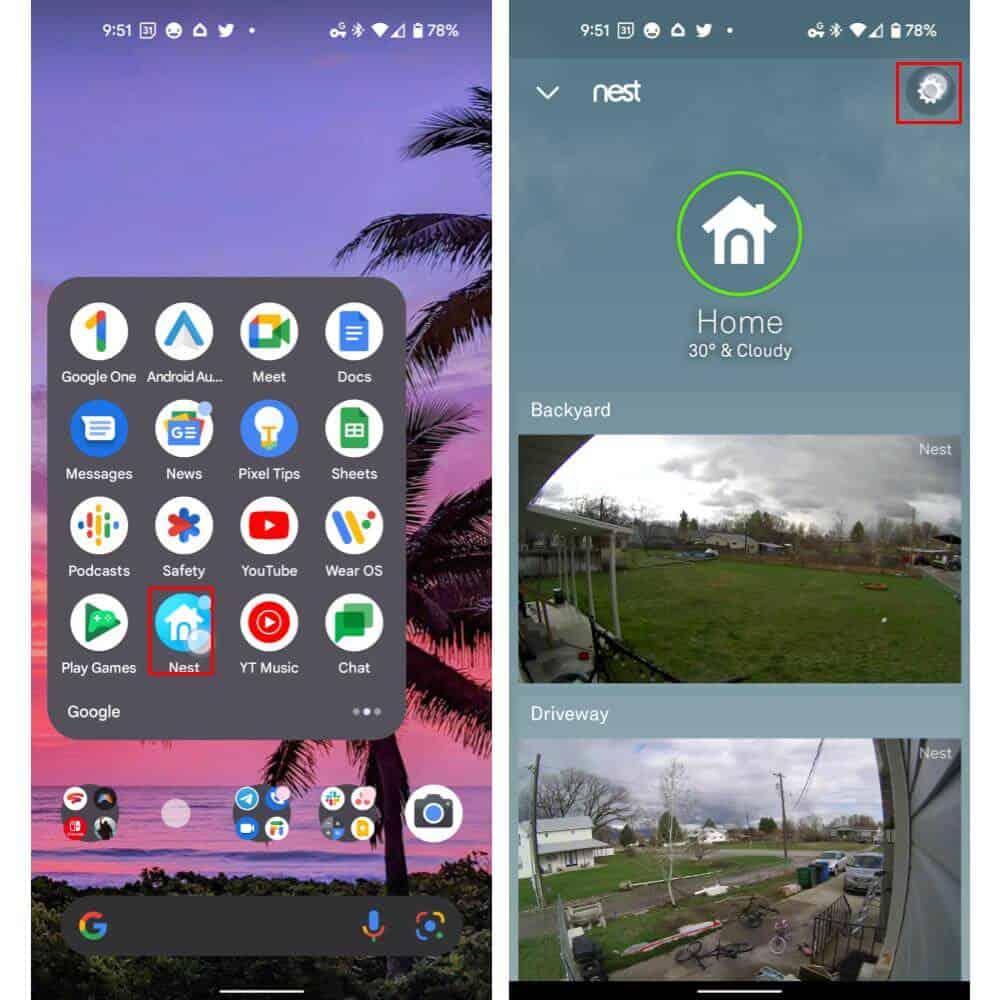 Once loaded, scroll down through settings and select the “Add Product” option near the bottom of the page. 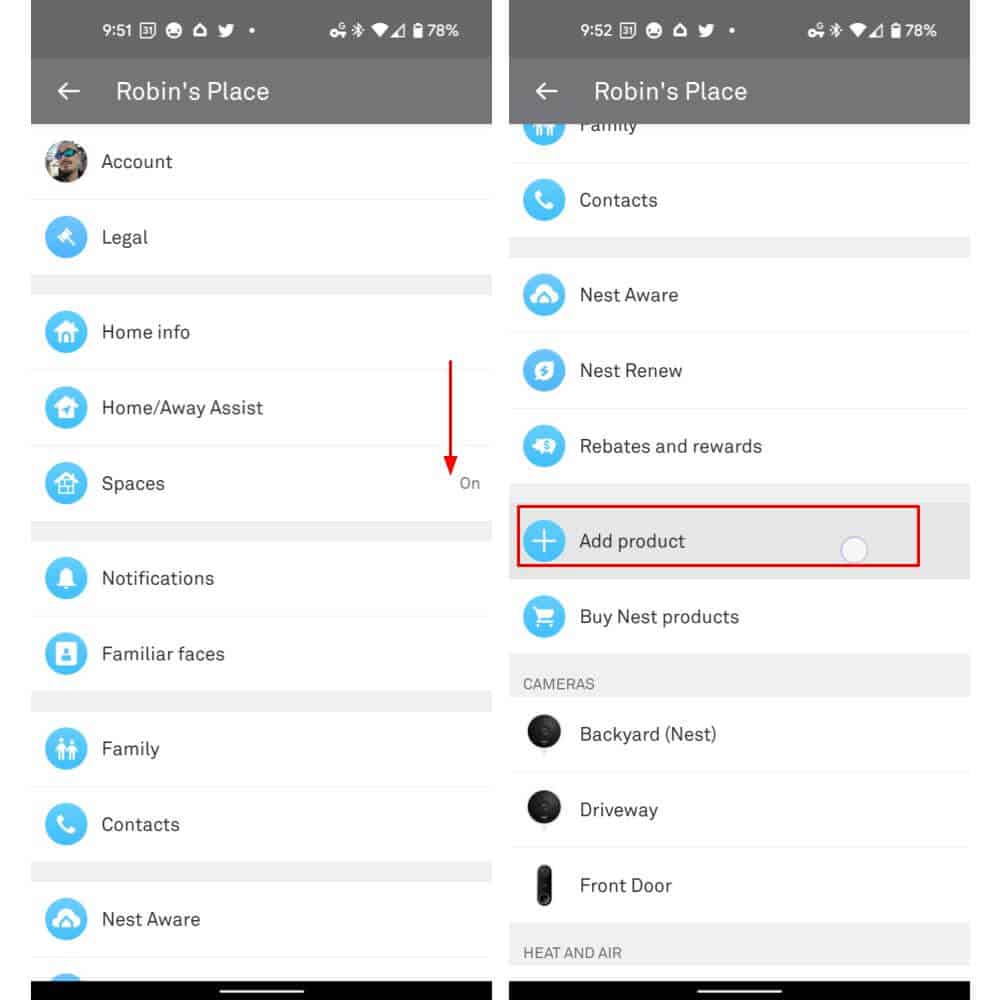 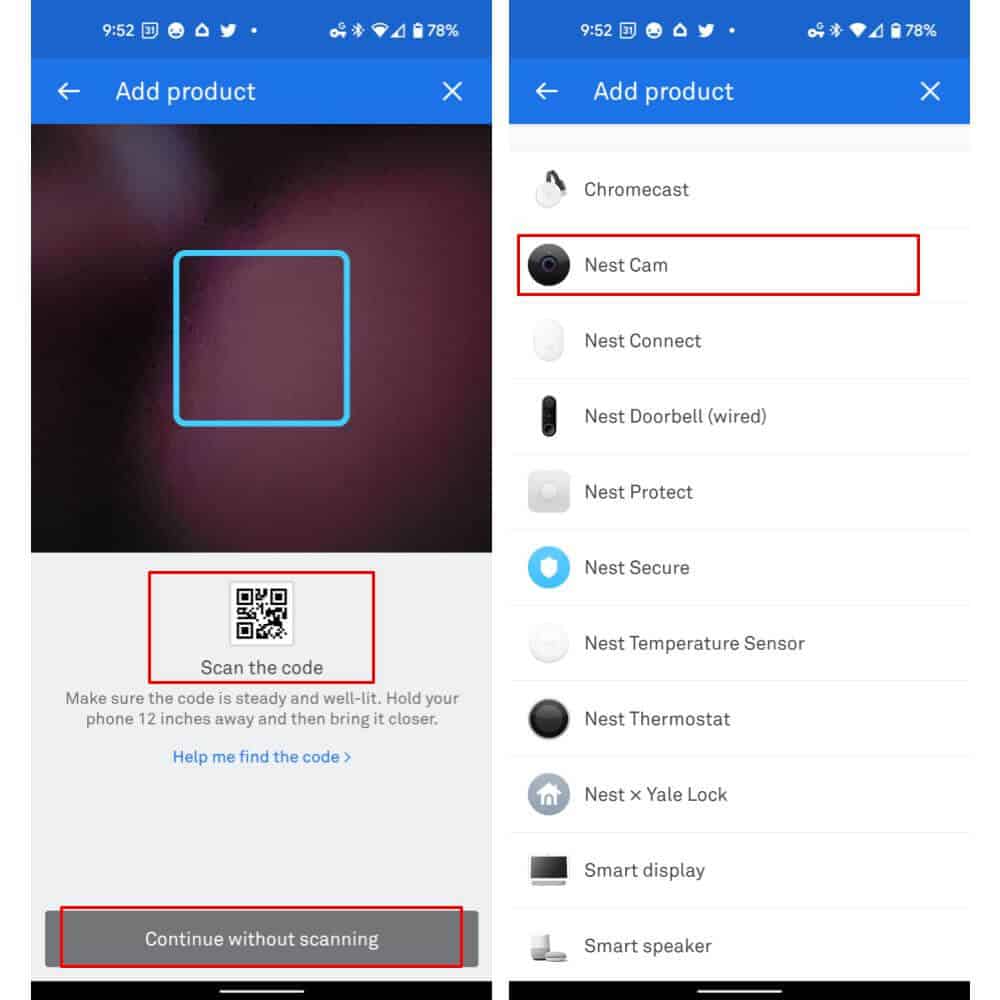 After selecting your camera type and then model, as shown below, you’ll only have a few remaining steps. The final step before the process becomes functionally identical is to enter the code found on the camera 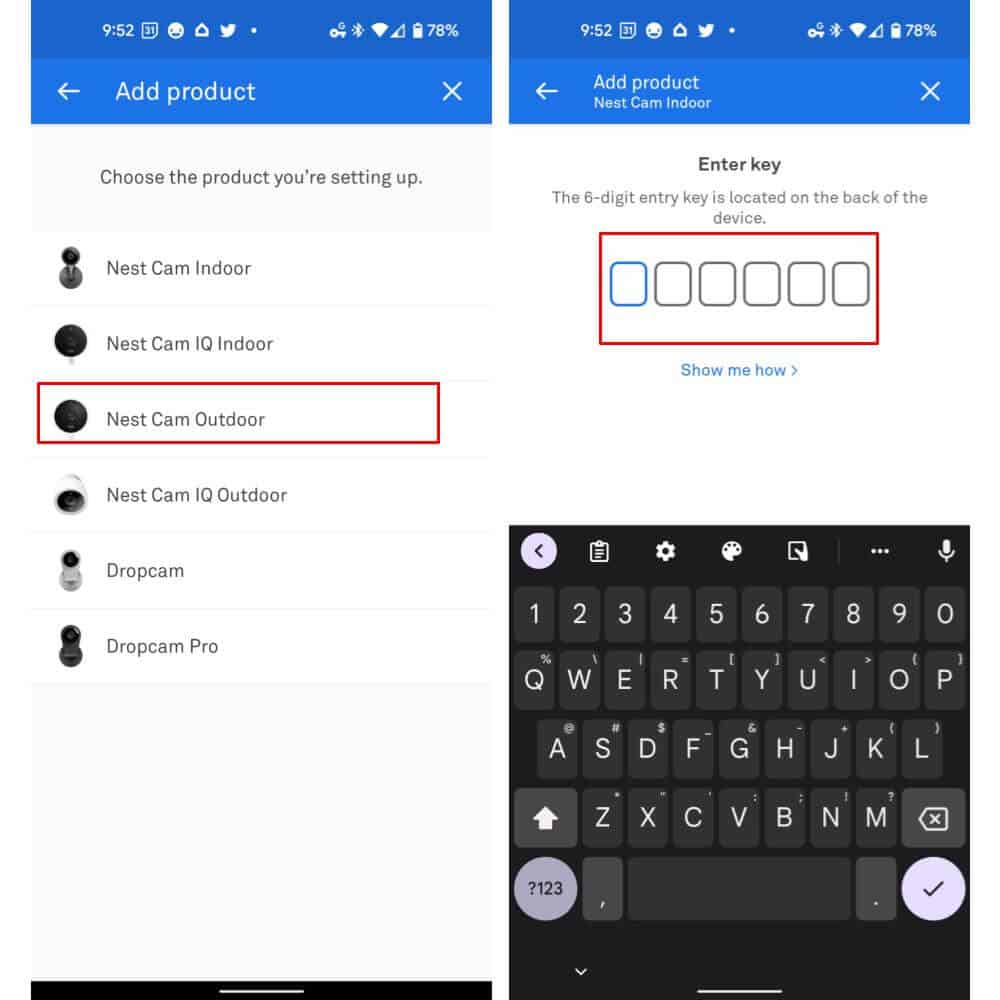 Once your camera is set up, you can head over to the list at the bottom of our What is Nest article for helpful guides on some of the deeper features.