Choosing the right TV for your gaming setup can be a bit complicated at first, but figuring out how to select the right one is luckily, not too complex. With some help of course.

Over the last few weeks and months I’ve been spending a lot of my free time playing games on the Xbox Series X and PS5 (mostly the PS5). And it quickly came to my realization that the experience was definitely better when using a proper TV that was designed with these consoles in mind. Instead of the monitor that I started out with.

If you’re not sure how to select the perfect TV for gaming, or even what to look for, this guide is here to help.

How to select the perfect TV for gaming

There are a few main things to look for if you’re on the hunt for a TV that compliments your new gaming console. Now you don’t necessarily need a new TV for your PS5 or Xbox Series X. But if you want to take full advantage of the features that they offer, that’s a different story.

Important features you want in a new gaming TV

The first thing I would suggest when shopping for a new gaming TV is to make sure that the one you’re getting has support for HDMI 2.1. Both the PS5 and the Xbox Series X have HDMI 2.1 support and this will be needed for a handful of the best features of these new consoles.

Or the new 30 series graphics cards if you were able to get a hold of one. The features I’m talking about are variable refresh rate, a 120Hz refresh rate at 4K resolution, and overall better visuals with more color. If you really want to go all out then a TV with an 8K display is something you could consider as well. Since both new consoles will support up to 8K visuals.

Keeping that last bit in mind, neither console has any games which come with 8K support yet. So an 8K TV is not absolutely necessary unless you’re trying to future proof as much as you can. But be prepared to pay a lot for that.

You’ll also want to keep a lookout for TVs with Auto Low Latency Mode (ALLM), gaming mode, and HGiG. Now let’s take a closer look at each one of those features. 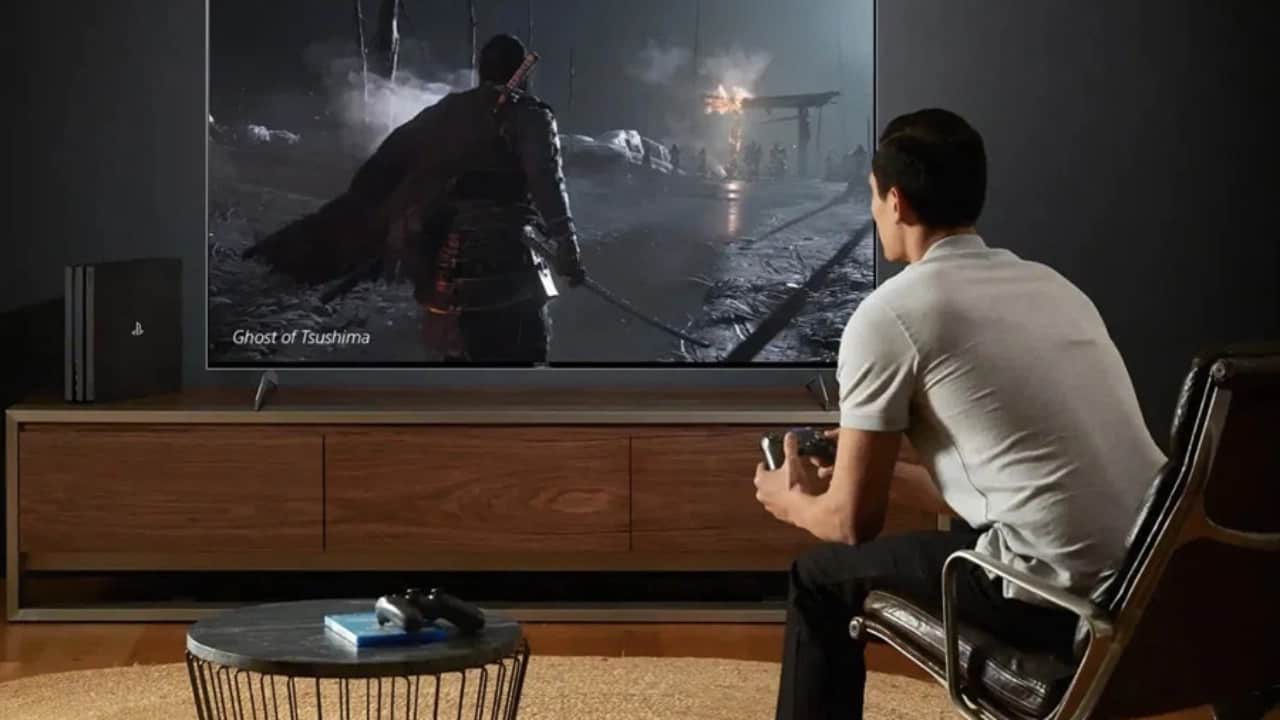 The short of it is that Auto Low Latency Mode or ALLM, is a setting on TVs and monitors that automatically enables a gaming mode (if the TV or monitor has one, and if it has ALLM then it should) as soon as it recognizes that a gaming signal. Whether that be from powering on a console or launching a game.

While there’s definitely some more technical sides to the feature, that’s the simple breakdown of what it does for you as a gamer. The reason this is important is because you want your TV or monitor in gaming mode when you’re playing games on them.

Which leads us to the next thing to mention since ALLM directly relates to it.

If you’re familiar with an HDMI cable, then HDMI 2.1 is not too difficult to understand. The cables look the same but have some all new tech on the inside. Basically HDMI 2.1 cables can allow more bandwidth to pass through. As well as allow for higher resolution picture quality and faster frame rates at those higher resolutions.

TVs with HDMI 2.1 support will be prepared for picture quality up to 8K resolution and 120 frames per second. Though you’ll still need an HDMI 2.1 cable and a game that is capable of outputting a picture at that resolution with that frame rate.

Early on in the PS5 and Xbox Series X lifespan, what you’re more likely to run into are games that can run at 120 frames per second at 4K. Which is still going to look really, really good.

This means you can get those smooth gameplay moments in games that support 60fps. Like Ghost Of Tsushima for example, which received a PS5 update a little while back to introduce faster frame rates and slightly better visuals and colors.

Games will still look good without this. But VRR will certainly make things look a little better thanks to the smoother and more consistent gameplay that it enables. 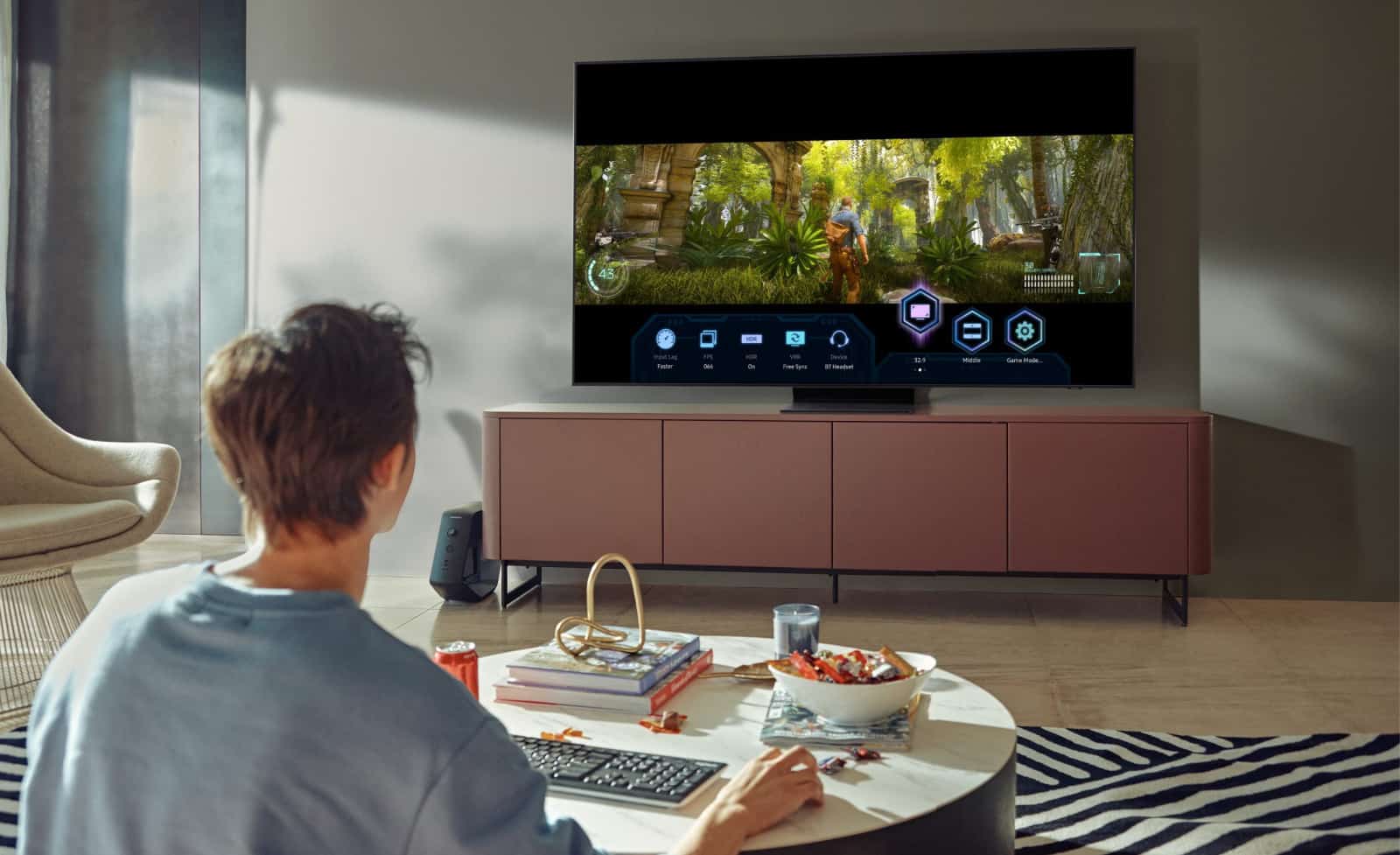 Gaming mode is basically just a mode that lets your TV optimize the the picture on-screen for playing games. As the name suggests. What it does is help to reduce the amount of input lag you get.

Or that’s the intended purpose. We obviously can’t verify that every TV which lists it has a Gaming mode is able to reduce the input lag to a level that you generally won’t notice. But this is a feature you want to have. You just want to make sure that the gaming mode does more than adjust the color settings, and actually is intended to reduce the input lag. The good thing is that most modern TVs will come with a gaming mode feature built-in.

So you shouldn’t have to look too hard to find models that support it. The bigger thing is making sure that the TVs you find with a gaming mode also have ALLM. Which makes things a lot simpler and turns the gaming mode on for you. Thus alleviating any need for you to switch to it every time you want to play games.

If the TV doesn’t have ALLM, it’s not the end of the world. As you can just turn gaming mode on yourself. But it’s a nifty bonus to have a TV that does this little bit of work for you.

HGiG, or HDR Gaming Interest Group, is not exactly a feature. Rather it’s a set of guidelines created by companies like Sony, Microsoft, LG, Panasonic and other manufacturers that have products related to gaming. Such as consoles and the TVs you connect them to. This consortium of companies also includes various game studios, such as Rockstar and Ubisoft among others.

The guidelines were created as a means for a more consistent implementation of HDR in gaming. And how to best implement it so that games make the most of HDR. The idea is that these guidelines can help TV manufacturers set up HDR for your games the way HDR was meant to be displayed by the game creator.

HGiG will help to standardize things so that most companies are on the same page in how they implement the HDR tone mapping for images displayed on your TV and monitor. That way your game is not missing important details in the images and colors you see on-screen when playing.

Should I buy a new gaming TV?

Considering the cost makes these a somewhat significant investment monetarily, it all depends on whether or not you’re able to spend that money.

If you can, then you should at least consider doing so if you plan to pick one of the new consoles, or use a TV with your gaming PC and one of the new RTX 30 Series GPUs from NVIDIA. Because these features will make a difference in how your game looks and feels.

But a new gaming TV is by no means 100% necessary to play games on these machines. It will simply enhance the experience to be more in line with the best of what they can deliver.