Google and Samsung later confirmed that wasn’t the case. And thus began the arduous wait for Galaxy Watch 4 owners to gain access to Google’s helpful voice assistant. Now almost a year later, the tool is available for users to download. If you’re eager to swap out Bixby for Google Assistant on your Galaxy Watch 4, this guide will walk you through the steps on how to do so. It’ll also walk you through how to use the feature on your watch.

Naturally, to use Google Assistant on the watch, it needs to be installed first.

Samsung said during its announcement that users would be able to find the app following an update that enables the tool. And sure enough, that’s how it worked out for us. Here’s how you can check to see if you have the assistant installed on device already, or if it needs to be downloaded.

Update your Galaxy Watch 4 to the latest software version

Now that Google Assistant has launched, your watch should have an update available to download. You’ll need to download and install this new software version for the watch before you can do anything else. So go ahead and start the update process. The update should only take a few minutes.

Launch the Play Store on your Galaxy Watch 4

Launch the Play Store app on your Galaxy Watch 4. Then, search for Google Assistant. 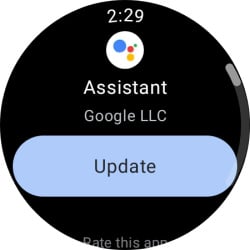 If you don’t already have Google Assistant installed on the watch for whatever reason, hit the install button. If it’s showing an update button instead, update the app.

Tap on the Get Started button 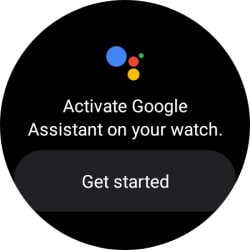 Open the app your phone Tap that, then tap the Next button to move to the next screen. You’ll then need to agree to the Voice Match feature to continue. Once you agree, go through the steps to set up Voice match, which will include saying a phrase or two so Google can set up recognition. After Voice Match recognition finishes, tap the Got It button at the bottom of the screen, then tap the Done button at the bottom of the next screen. And that’s it. Google Assistant is installed.

One thing worth noting is that if you already have Voice match set up prior to all this, you shouldn’t have to go through that step again on the watch. I personally didn’t have to with mine since I configured Voice Match well before this update.

How to use Google Assistant on your Galaxy Watch 4

Now that you have the app updated or installed, there are two ways you can activate it. So, we’ll walk through both activation methods. 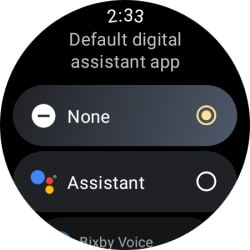 Google Assistant may be installed but it’s not the default assistant app yet. Open up the settings menu, then scroll and look for apps. Inside the apps menu, select and tap Choose Default Apps. Then select Digital Assistant App, and then tap Default App, and choose Google Assistant as the option. It may also be set to default already like it was for me.

Press and hold the power button 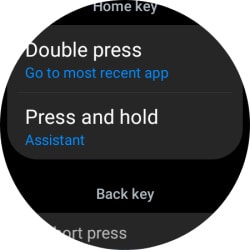 Once Google Assistant is installed on the watch and you’ve gone through choosing it as your default option, you can activate it by pressing and holding the power button. This will be one way to activate the Assistant. This also serves as the better method if you’re worried about accidental activations. Which doesn’t happen often but can happen.

You’ll need to set it as your custom home key option first though. Here’s how to do that. Launch settings, then open advanced features. Scroll to find customized keys and you can then set Google Assistant to one of two options. The double press action of the home key, or the press and hold action of the home key. Select one and from then on that action will wake Assistant.

Alternatively, you can say “Hey Google” and this will also wake Google Assistant up. You can then proceed to ask it any questions you wish or issue a command. Keep in mind that if you have other devices nearby that have Google Assistant, the wake word can trigger those devices.

The waiting is over. You’ve got Google Assistant installed on your Galaxy Watch 4 and you can use it for any number of things. Rejoice in the fact that your device just got a little better. And maybe thank Google and Samsung for finally getting this ready. Even though it did take an obscenely long time in the first place.