Even though it launched back in October 2021, Windows 11 is still a growing platform. Because of this, it has a dedicated army of beta testers called “Windows Insiders.” Members in the program can get their hands on new features and bug fixes to try out and give feedback on.

The program is called the Windows Insider Program, and anyone who wants to be on the frontlines to receive the latest update from Microsoft should consider getting involved. However, you can’t start testing the newest software if you don’t know how to sign up for the program. The process is pretty easy if your computer is compatible, so here’s how to get the latest Windows 11 beta.

First, you need to join the Windows Insider Program

The option to sign up for the Windows Insider Program lives in the settings. First, open up the Start menu and click on the setting icon. You’ll see a plethora of different settings that you can tweak on your computer, but you will need to go to the “Update & Security” settings.

Again, you’ll see a lot of useful settings you can change, so it’d be useful to check these settings out sometime. You’ll see a panel on the left with several different tabs like Windows Update, Windows Security, Recovery, Find My Device, Back up, etc. For starters, go to the Windows Update section.

Go down to the bottom options called “Windows Insider Program.” Signing up for the program is pretty straightforward. First and foremost, you’ll need a Microsoft email account (Hotmail, Outlook, Live, MSN, Passport). When you press the “Signup” button, you’ll register that account to use the Insider Program. If you don’t have an account, you’ll also have the option to create one then and there. After accepting the Terms of Service, you’ll be all set. Next, you’ll need to select the beta channel

When you get your account all set up, you’ll then need to select the channel you want to be involved with. There are three options, but only two of them can be used for the Windows 11 beta (the Dev channel and the Beta channel). Picking the right channel is all a matter of stability.

The Dev channel will get you new features as soon as they leave Microsoft. Because the software is so much newer, your software will be less stable. It’s recommended that you don’t use your work computer because your computer might not be as functional as you wish. With the beta channel, you’ll get the updates a little bit later, but it will be more stable. After you choose which channel you want to be in, you’ll then get a message from Microsoft thanking you for your participation. 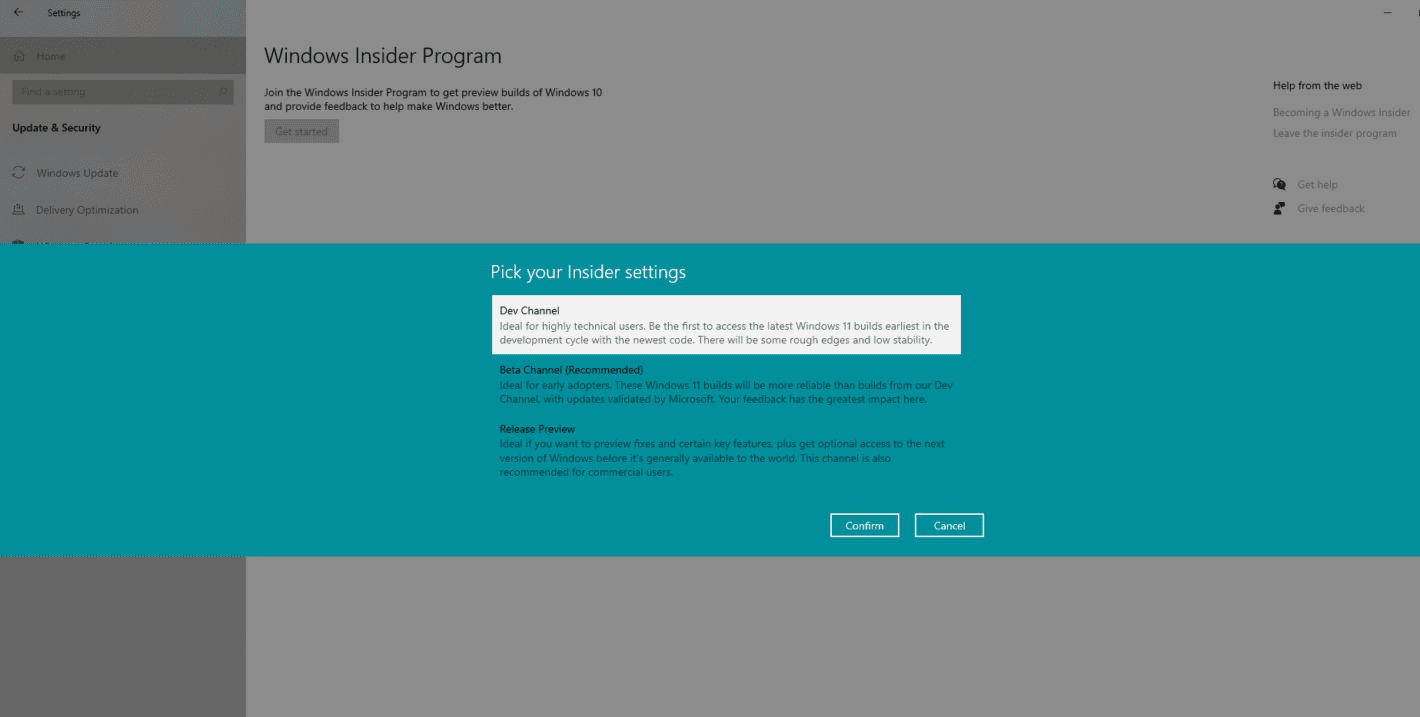 The next step might cause some people to shudder if they don’t like their data going anywhere. Windows will ask you if you want to send off data and diagnostics to help improve the system. Since this is a beta program, you’re going to need to do so to continue. After that, you’ll then get an update automatically. Once it installs, you’ll be on the program which means that you’ll get early builds of Windows to try out.

Being in a beta program is not for everyone, and people can get tired of the bugs and jitters. If, for any reason you want to leave the Windows Insider program, you can do so. However, it just won’t be as straightforward as signing up for it.

There are two options for leaving the Windows Insider Program, and none of them are great if you want an immediate solution. Firstly, if you want to leave the program right away, you can do that, but the system will install a fresh version of Windows on your computer. This means that ALL OF YOUR DATA WILL BE WIPED. You need to know that before agreeing to do so. This should only be done if you’re confident that you’ll be able to pick up where you left off easily with a fresh installation.

Being on the Windows 11 beta lets you play Android apps

One of the biggest announcements with Windows 11 was the ability to play Android apps right on your computer. If you’re interested in trying them out, then you will be able to do so. Right now, Android apps aren’t available on any final build of Windows 11, but beta testers can try them out.

What you want to do is make sure that your computer has hardware virtualization enabled. This is a really important step when it comes to running the apps because you’re basically running a virtual machine.

After that, make sure that the Microsoft Store app is up to date on your computer. Go to the Library section and update everything. It might take a while, but you want the latest version. After that, you might want to restart your computer.