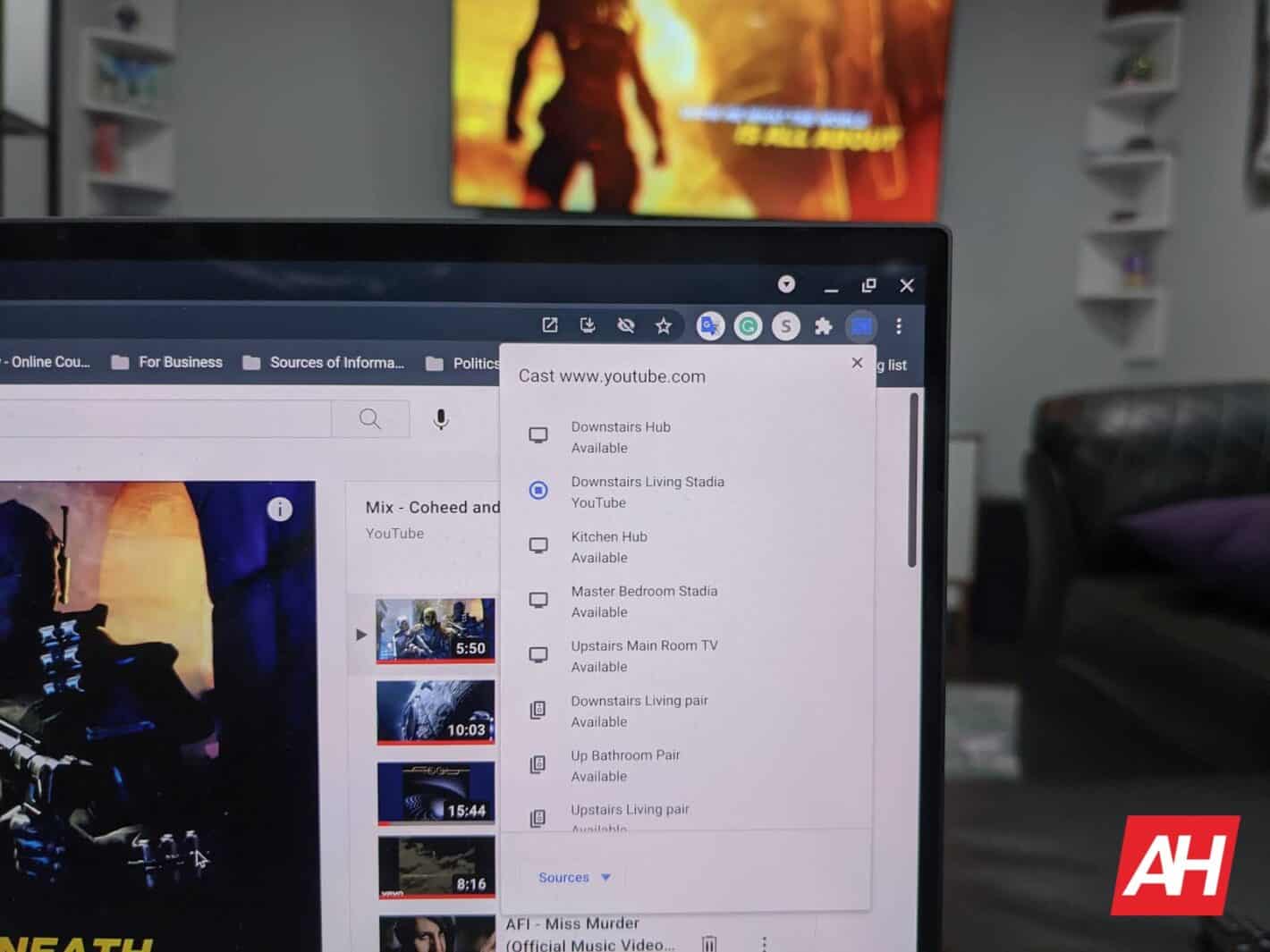 As you may already know, Chromecast-enabled TVs and dongles, and other gadgets that support cast features can do so from Chrome on desktop computers as well as laptop and Chromebook platforms. More specifically, directly from the Google-built browser. That’s as opposed to relying on a mobile app or on-device apps that feature casting options.

However, Google hasn’t necessarily made that an easy feature to find. Although it is incredibly easy to use once you know where to look. At the very least, not if you don’t already use Chromecast or if you aren’t already familiar with deeper features in Google Chrome. In this guide article, we’ll cover exactly how to accomplish that task. As well as some of the reasons why you might want to.

Why would you want to cast from Chrome on your laptop or desktop?

Smart TVs and mobile apps have come a long way since the introduction of the world’s first Chromecast device.

On the former front, that not only means that most TVs have apps already installed for most streaming media. Many of the best newer sets even come with Chromecast Built-In. So users can, as often as not, stream directly from their mobile device apps. Making it easier than ever to get HBO Max, Hulu, Netflix, YouTube, and a wealth of other streaming apps up on the big screen.

But, of course, that isn’t always the case for every app. In some cases, streaming apps simply aren’t included on a television. Whether by proxy or as a matter of lacking or failed negotiations for the app to be included. In other cases, pre-existing partnerships or proprietary priorities keep apps from being pre-installed.

In those cases, using a mobile app to stream to a Chromecast or Chromecast-enabled TV would seem an ideal solution. But that’s not always all that feasible either. Especially in cases where the smartphone has a low battery or simply isn’t available.

Fortunately, Google built Chromecast protocols on top of existing Chrome code and users have been able to cast from a desktop, laptop, or Chromebook using the desktop version of Chrome for quite some time. If that’s what you’re looking to accomplish, that’s exactly what this guide is here for. So, without further ado, let’s get started.

Here’s how to Chromecast from desktop Chrome

Now, there are actually two methods to get what’s on your laptop or desktop screen up onto the TV. The first is fairly straightforward but not always intuitive for newcomers to the casting landscape. Namely, casting using streaming media sites that allow for it.

The second method is a bit laggier, at least in terms of inputs from the source device. So it’s not always the best option for showing things in real-time — aside from streaming media. That is unless you go into it prepared for some latency between mouse or touchpad inputs and a response on the television display output. And involves casting the entire screen. But we’ll discuss more on those topics as we come to them.

Using sites with a Cast button

As noted above, the first method is the easiest to use. And it should be the most intuitive to those who have already used a Chromecast device or Chromecast Built-In SmartTV. For our example, we’ll be using YouTube since it provides a clean interface and easy navigation without too many steps. But the process will be effectively the same for any website that supports Chromecast output from desktop or laptop Chrome. That includes sites such as Hulu, Netflix, Amazon Prime Video, and Disney+, for example. 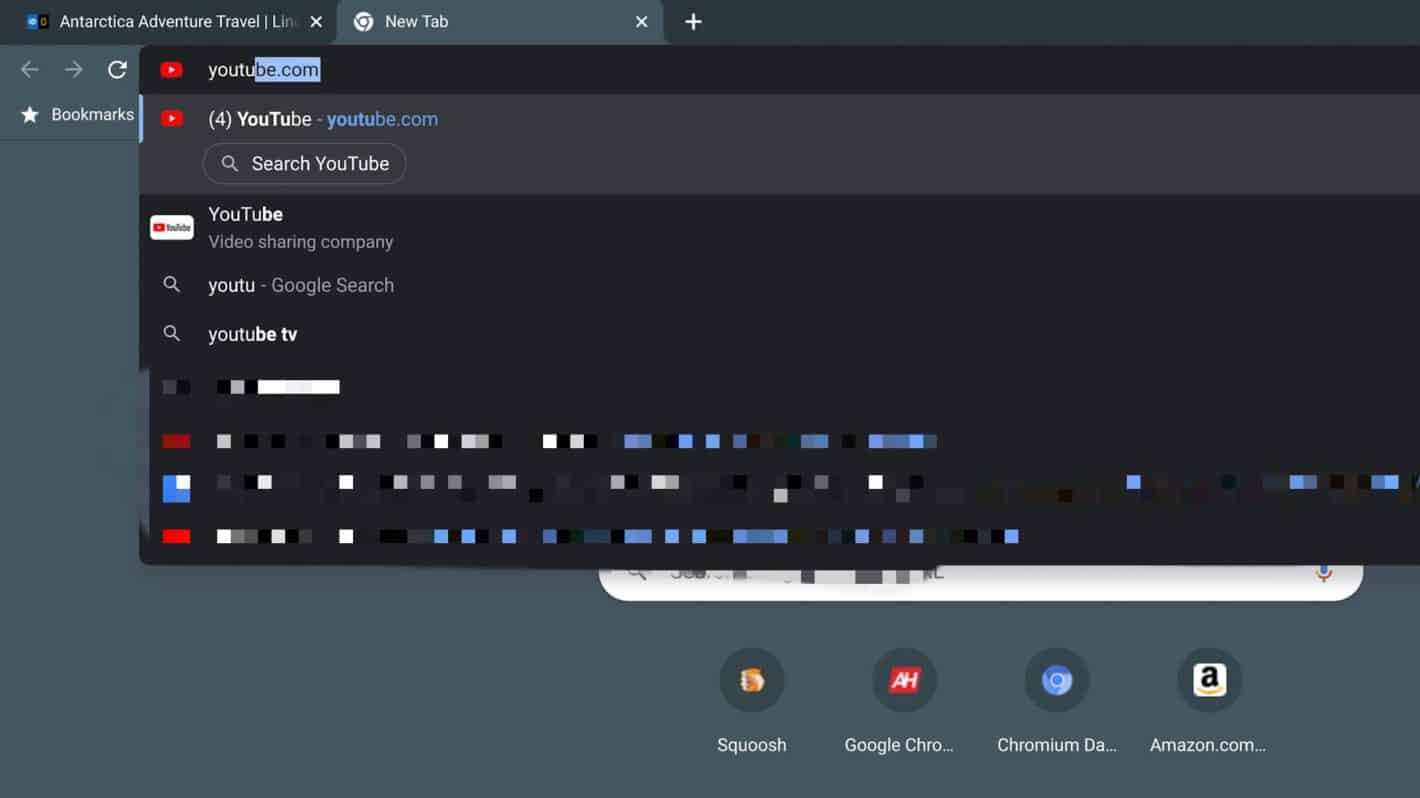 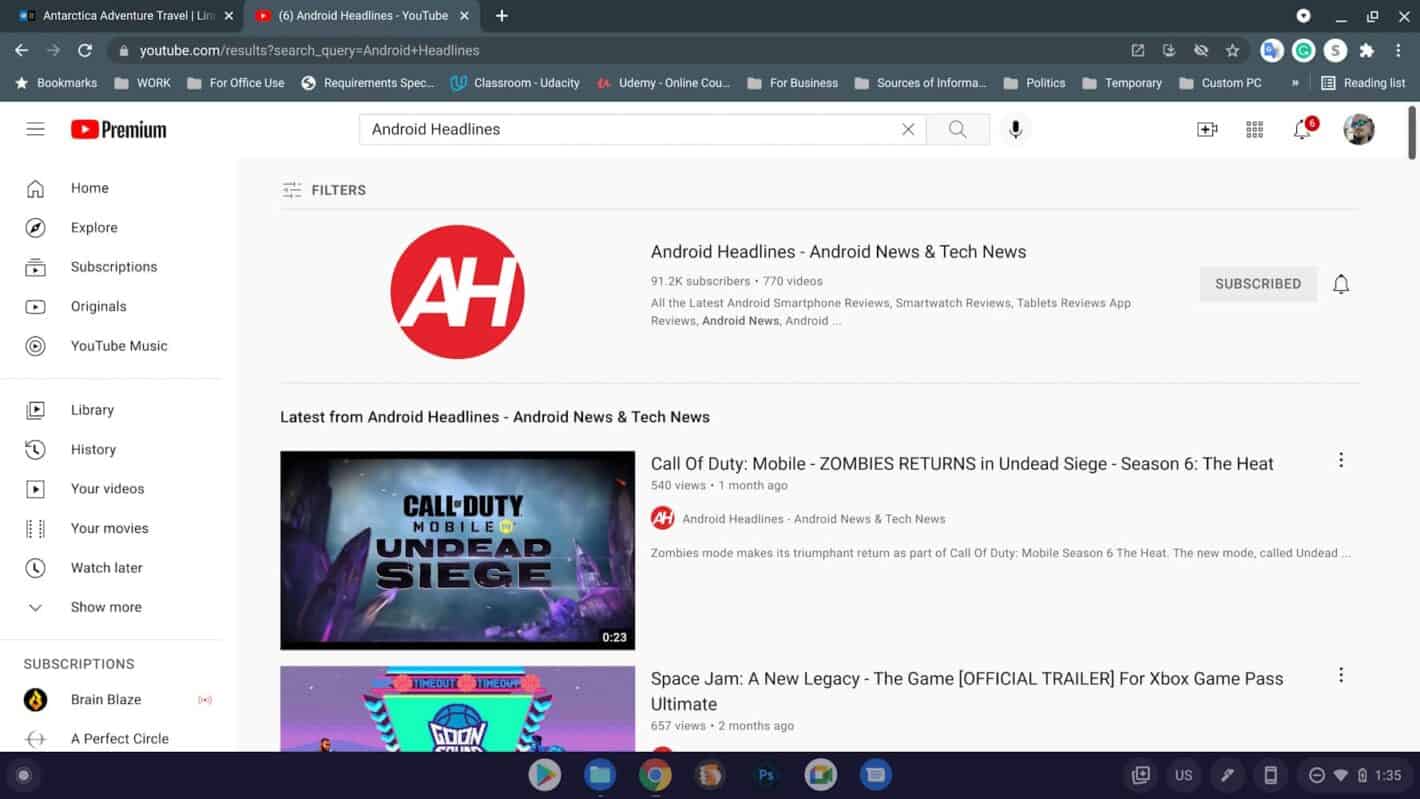 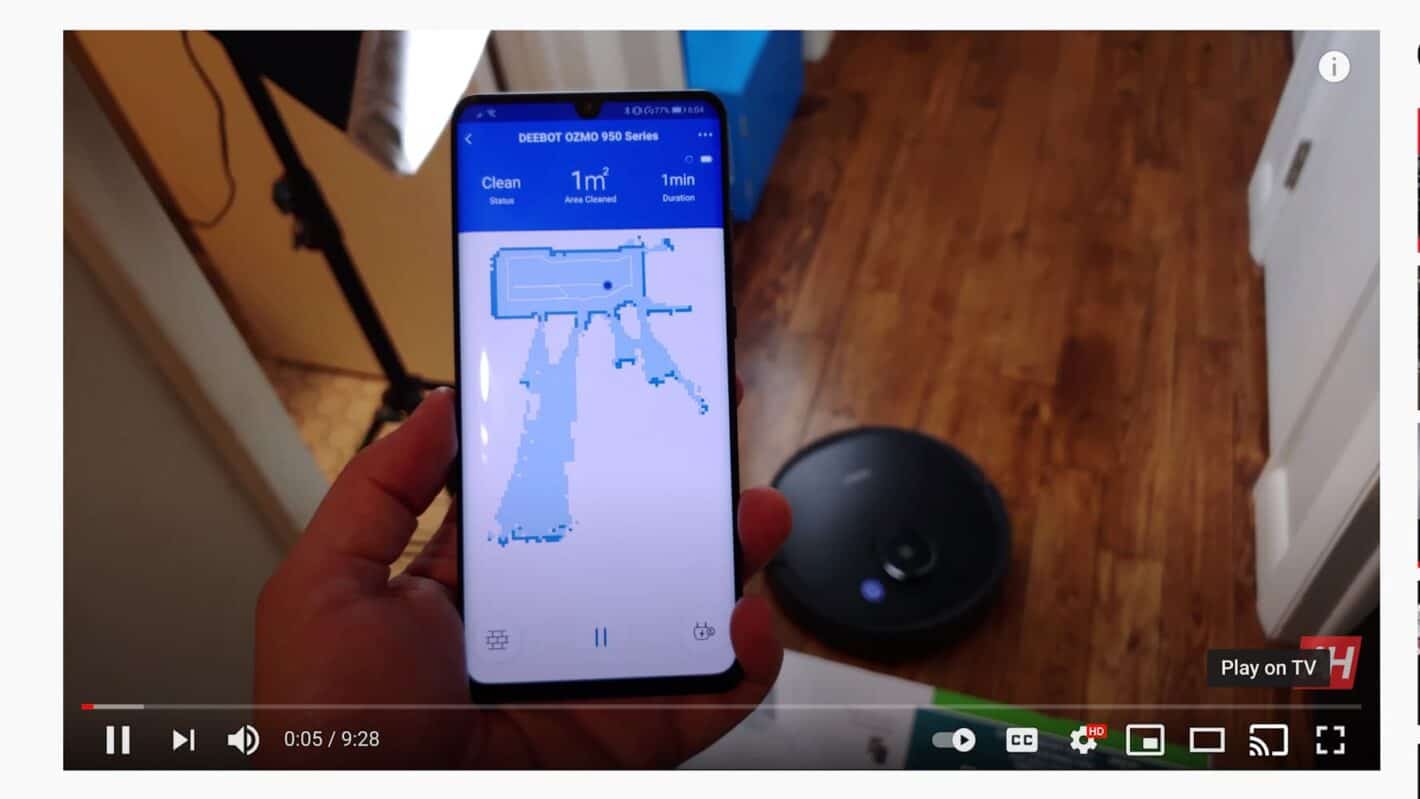 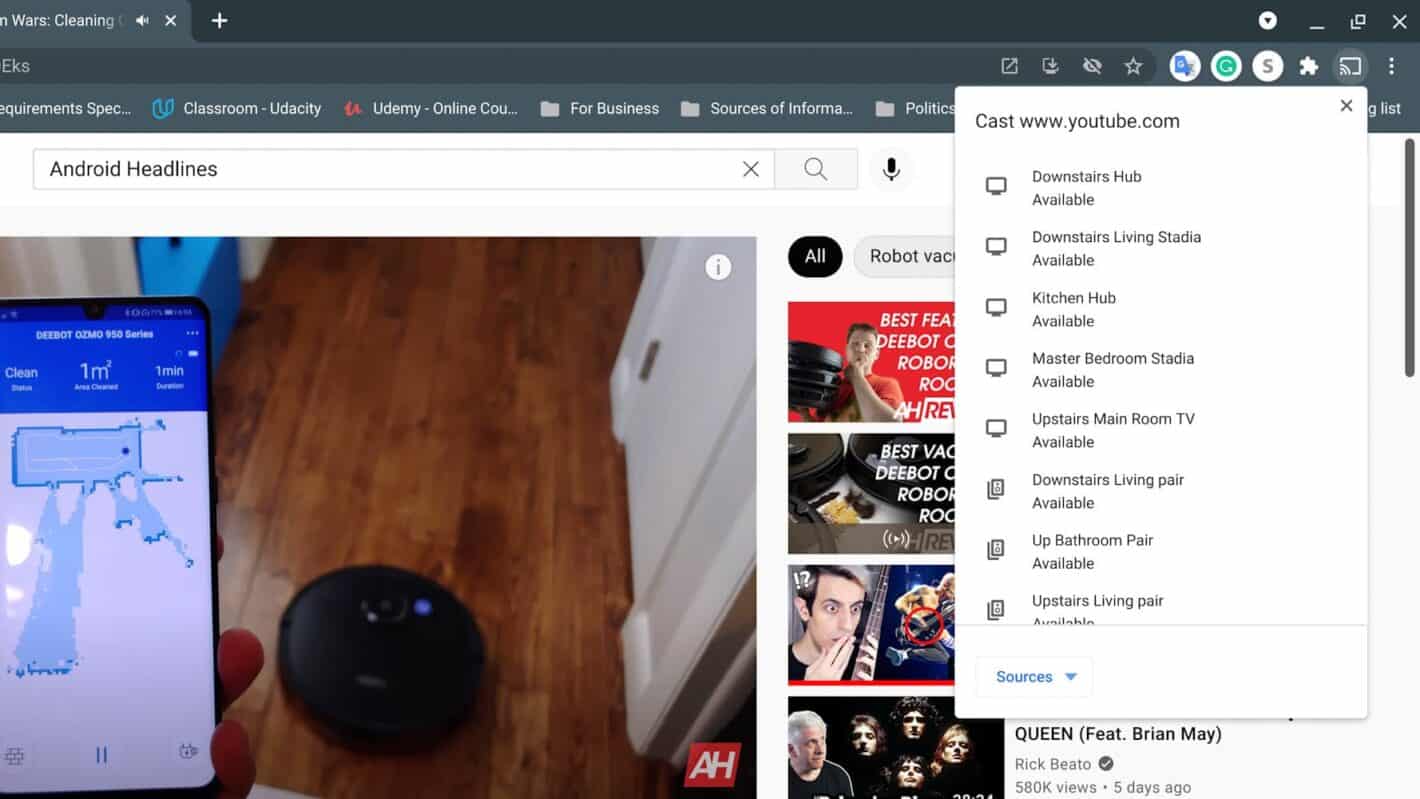 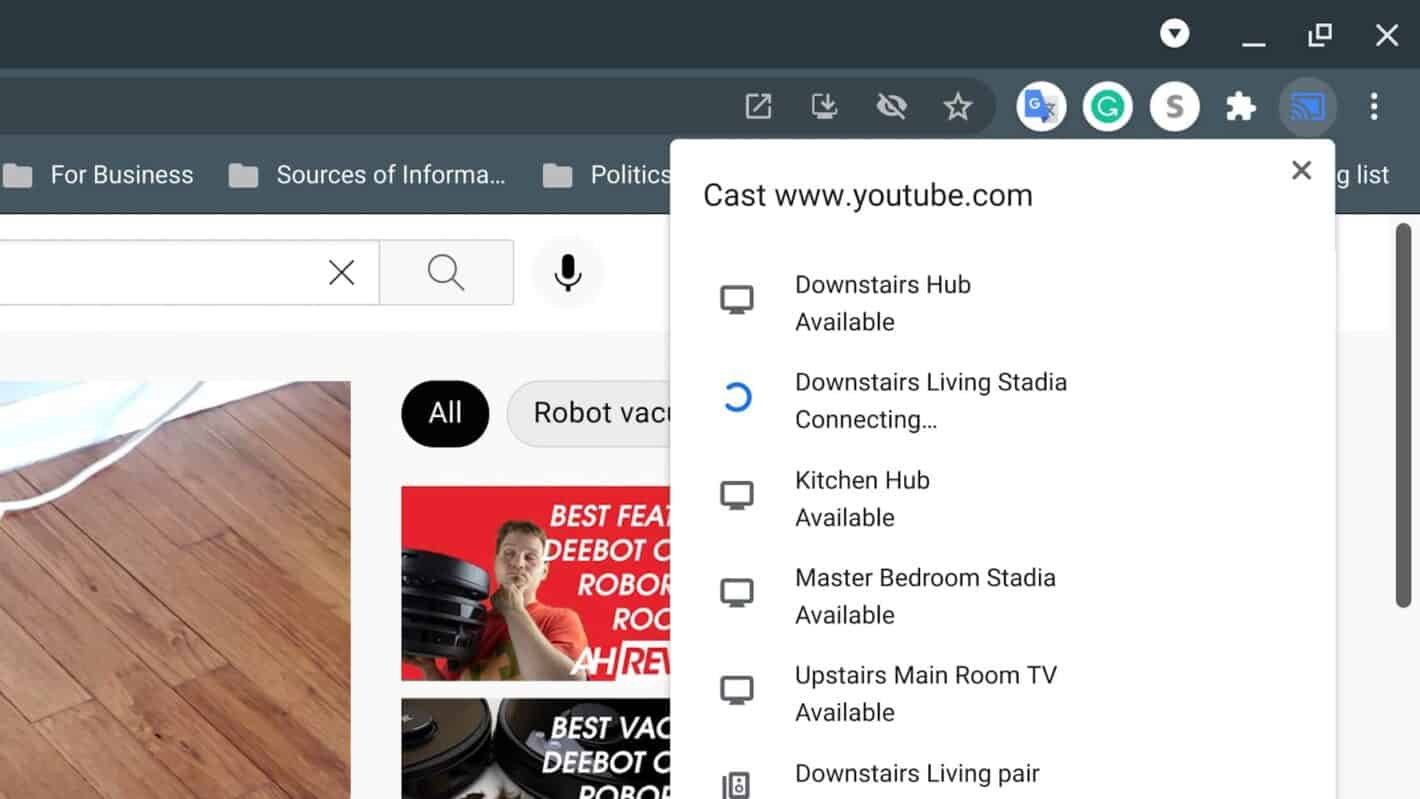 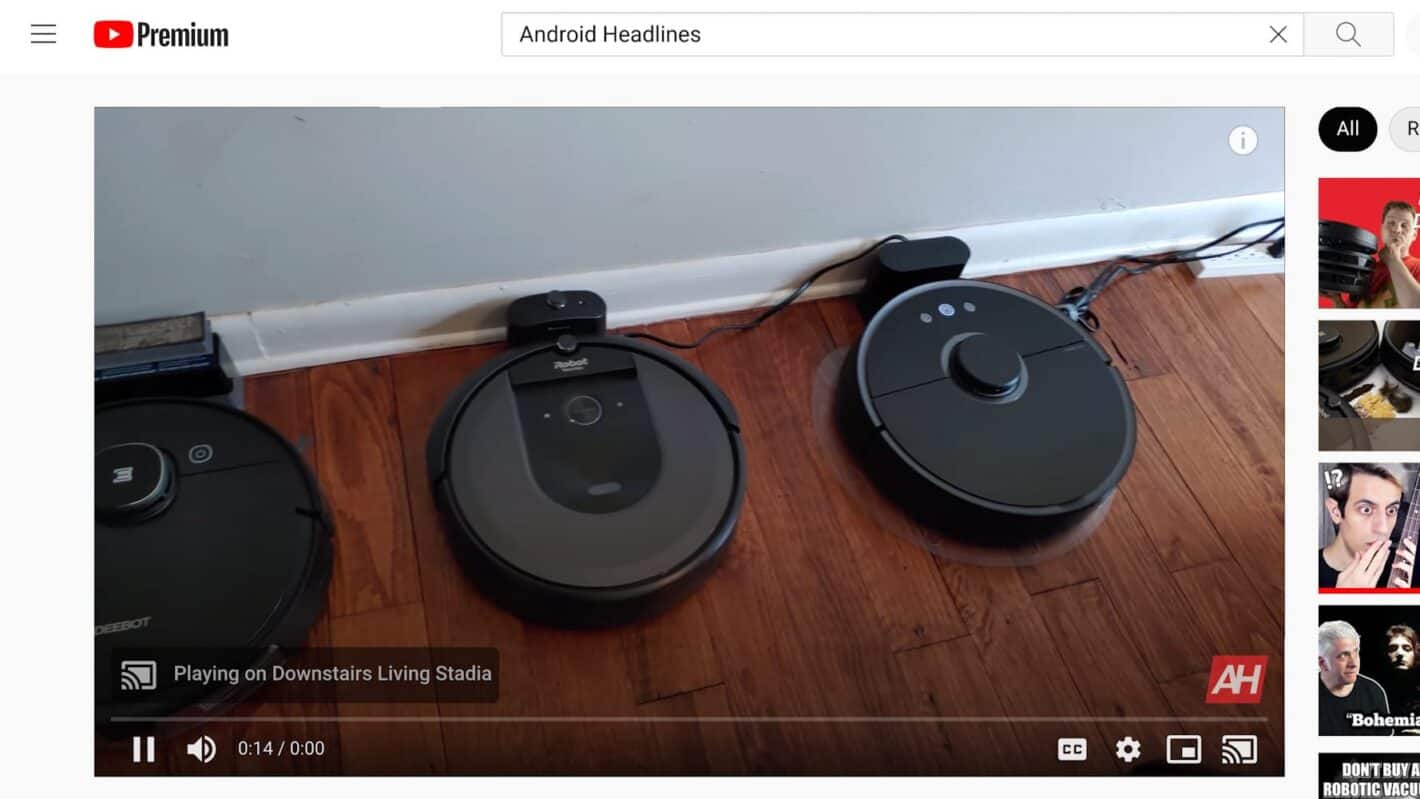 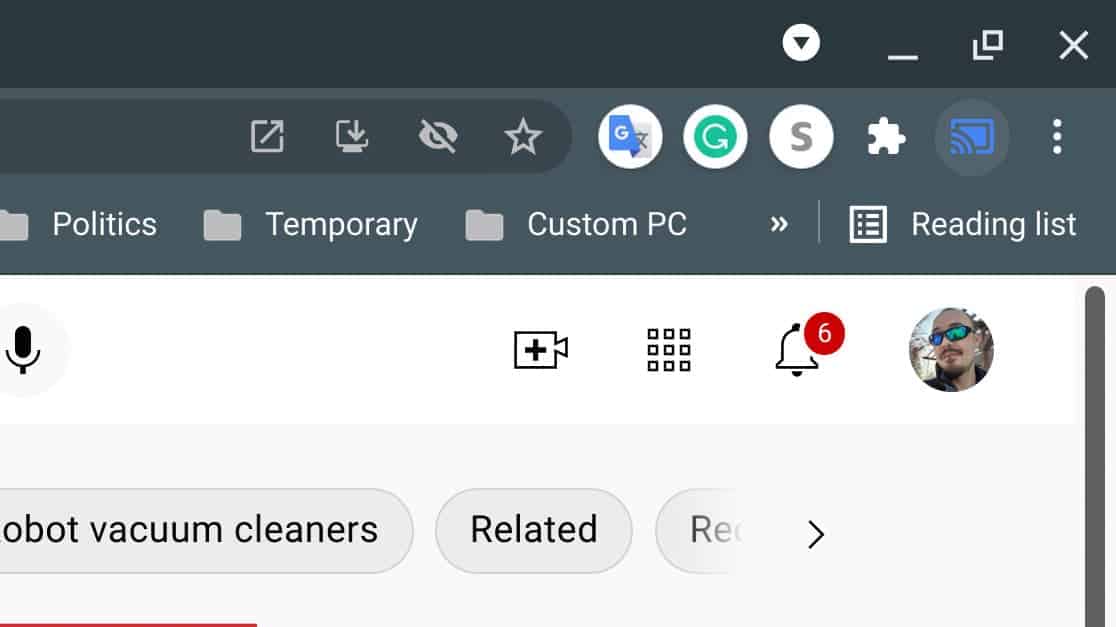 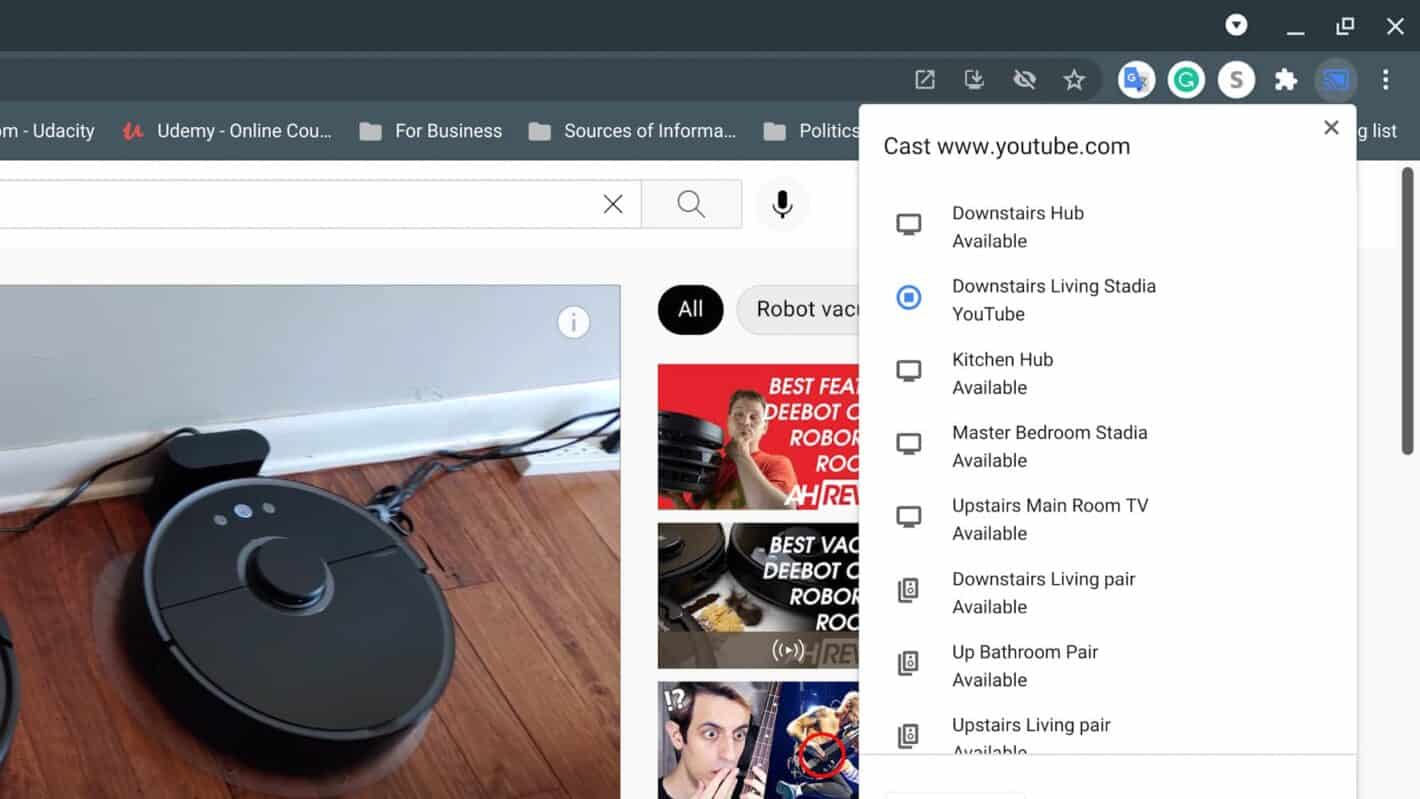 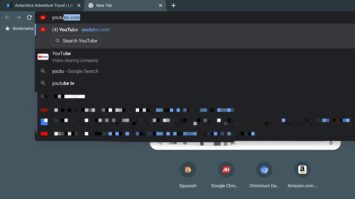 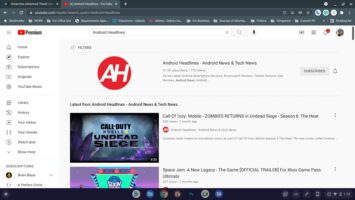 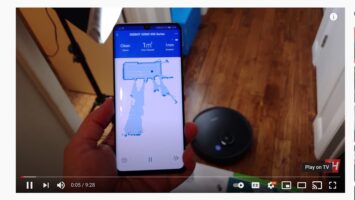 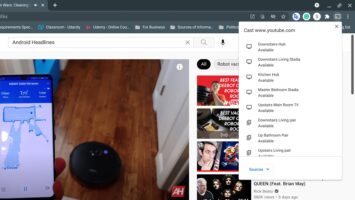 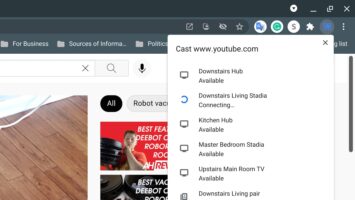 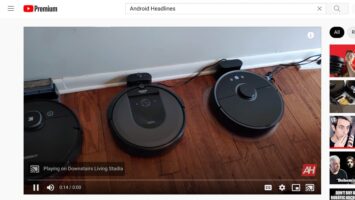 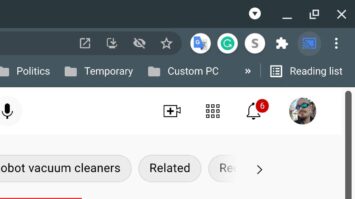 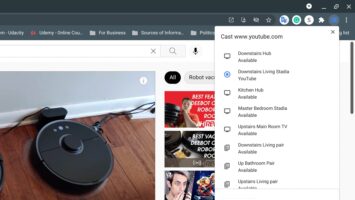 If that doesn’t work, here are some straightforward troubleshooting tips

Of course, there are a few prerequisites to check before getting started. And these may also be the underlying issue if, for some reason, casting doesn’t start as it should. Or, for example, if the intended media playback device doesn’t appear in the list of output devices. It’s worth bearing in mind, though. This list is not exhaustive and there may be extraneous network or device issues behind any issues you may encounter.

Summarily, this is a list of common fixes for what can, in some network environments and for those who aren’t experienced with Chromecast, be underlying issues when these steps don’t work.

Equally importantly, you may need to go back to step seven in the above-mentioned method or to step five in the below-mentioned method after checking any of these tips. Most commonly, the connection attempt will need to be closed — by clicking or tapping the blue casting icon in the top-right-hand side of the Chrome UI. Then you’ll need to connect again from those steps before the proper Chromecast device appears and/or reconnects.

The second method for connecting is somewhat more latency-ridden than a straightforward playback from a website. That means it isn’t always the best for applications that need real-time interaction. However, it can still be a great way to explore a website as a group. Such as planning a vacation or showing off something interesting that you’ve found with a group of friends or family.

You may also choose to use this method in a pinch- albeit typically with a lower resolution and other potential issues — to stream media from sites that don’t typically support it.

We’ll be exploring the former use-case scenario in our example, looking at a site for a vacation cruise to Antarctica. But, in any case, the process will be the same 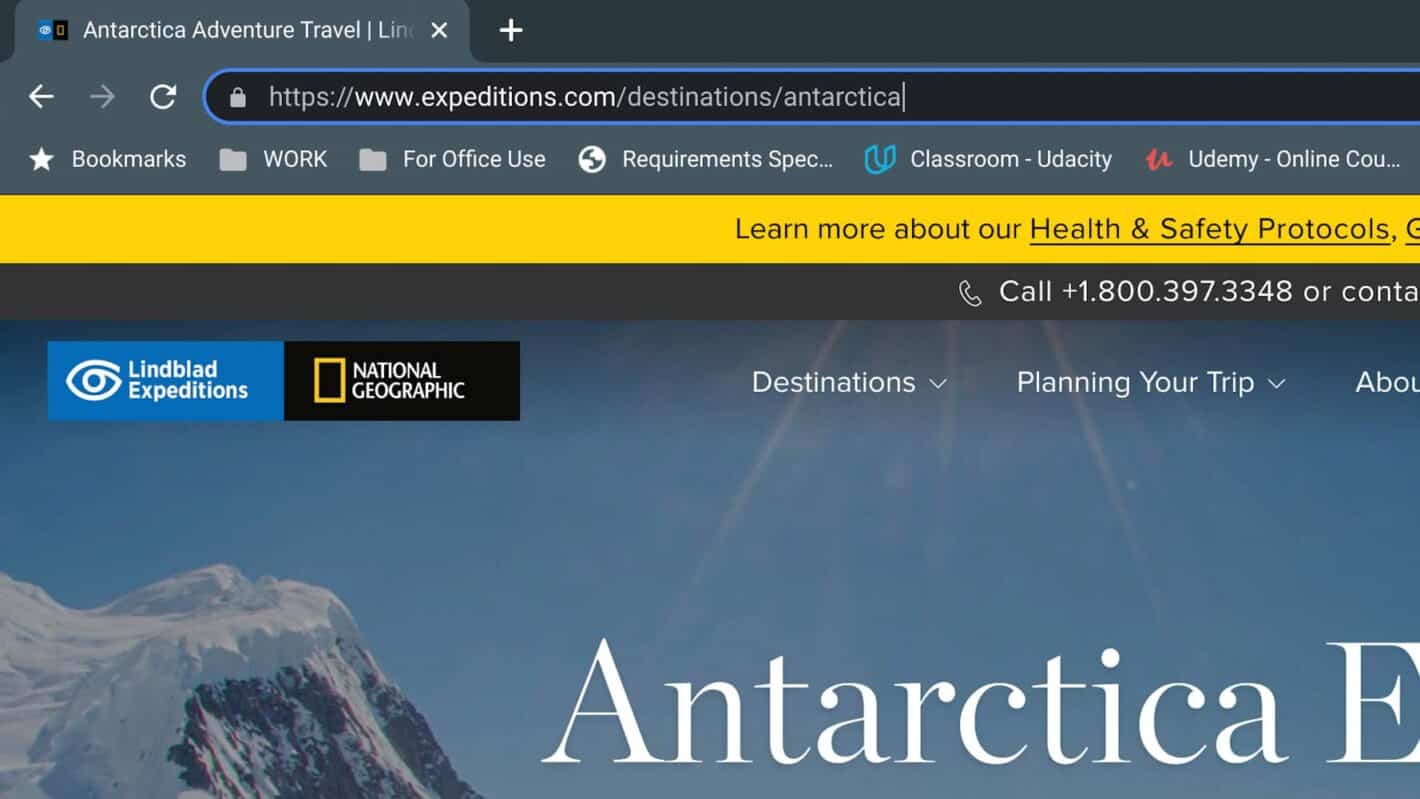 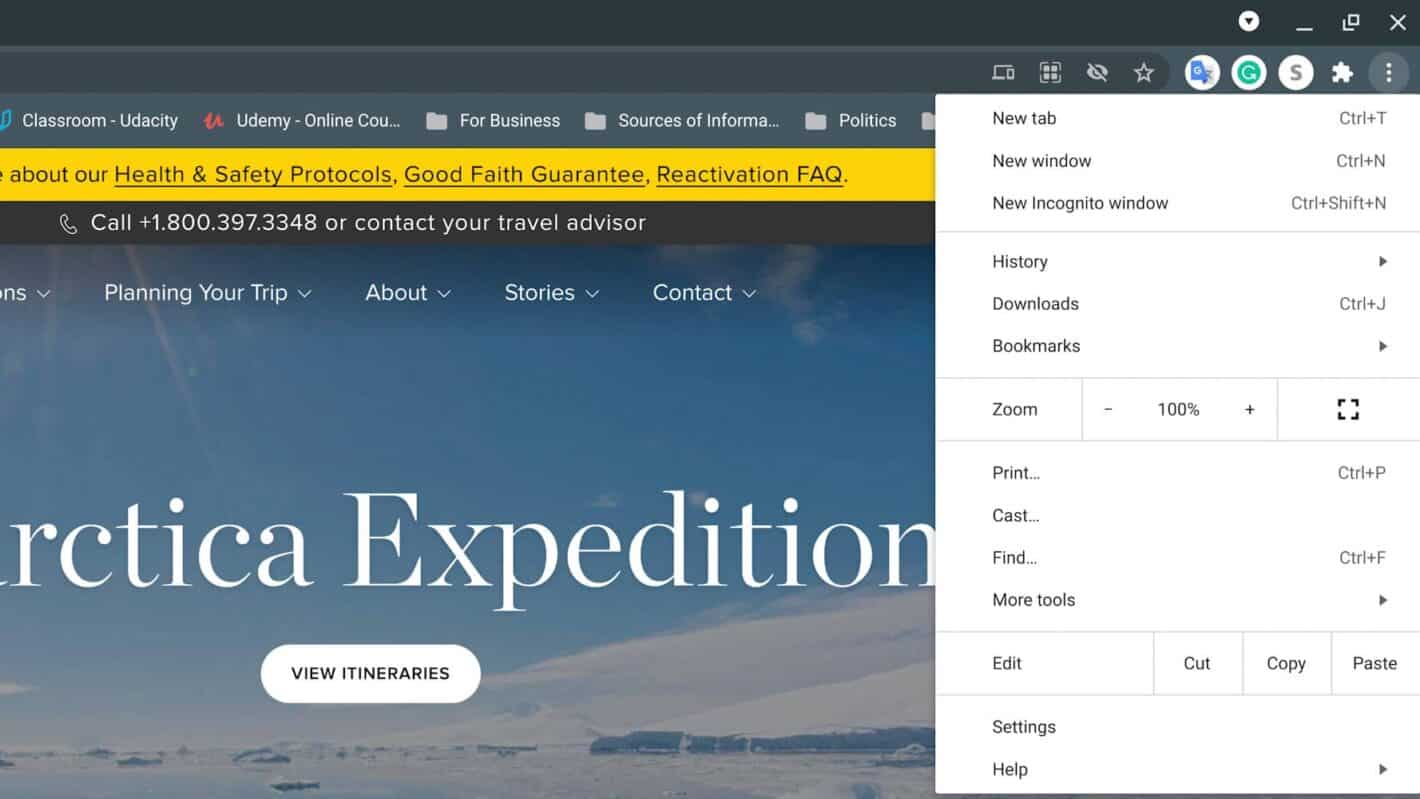 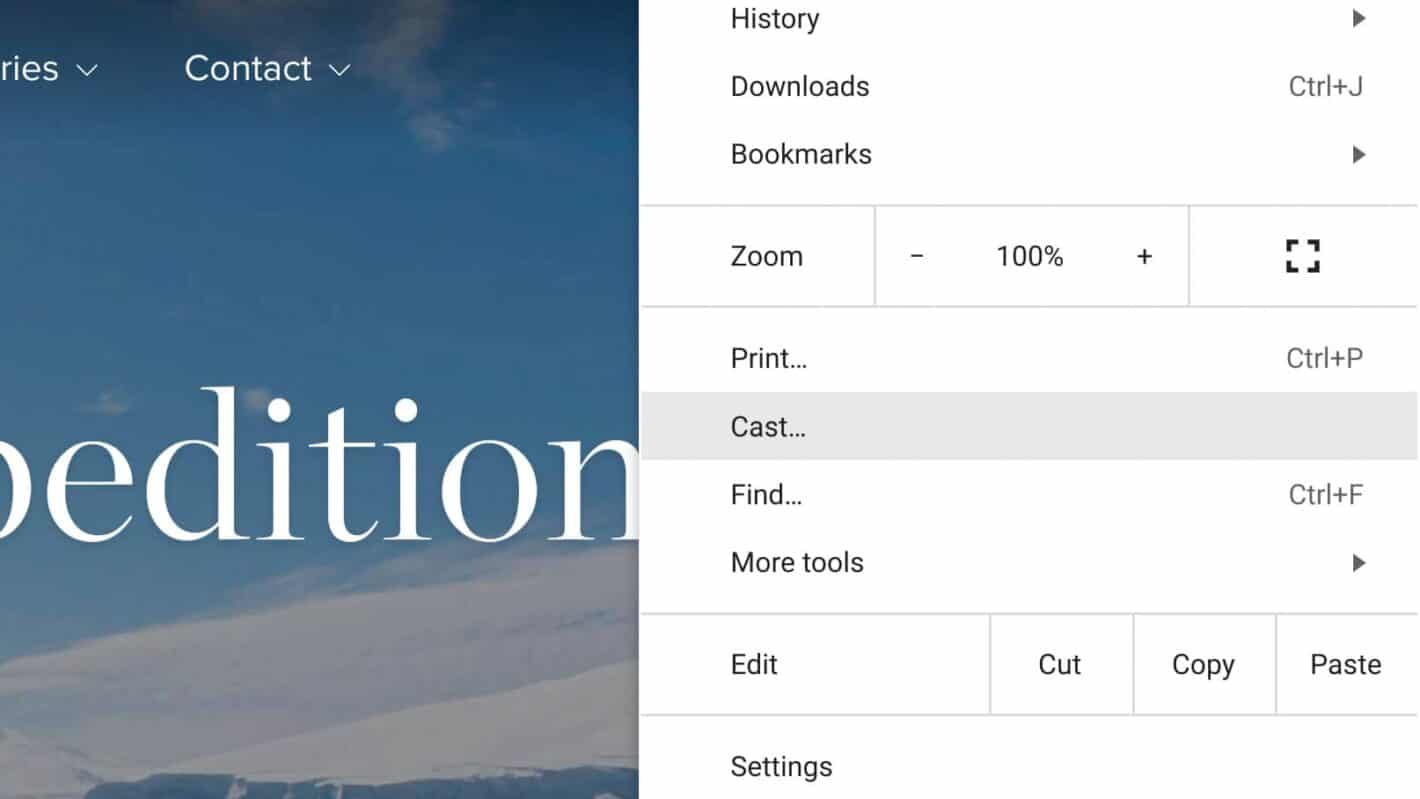 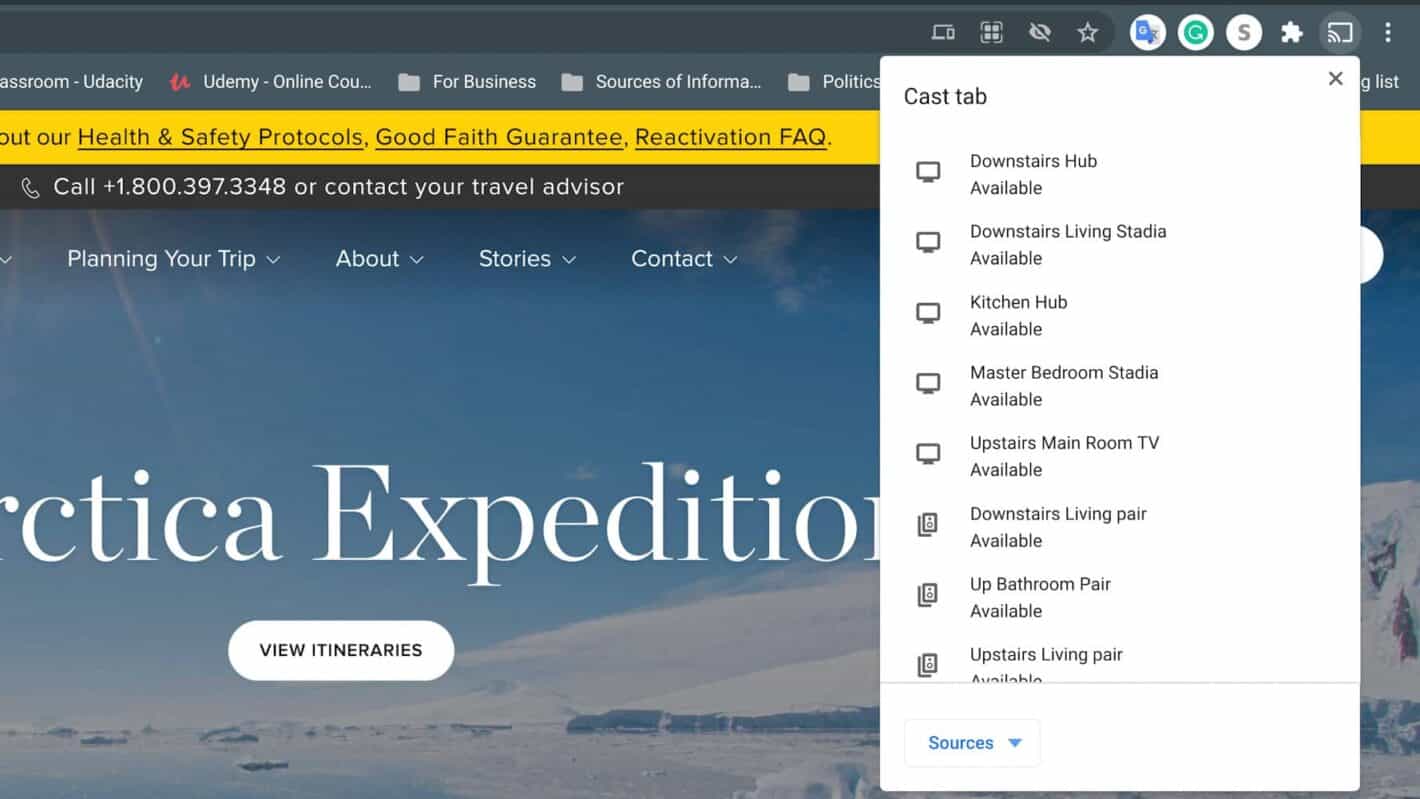 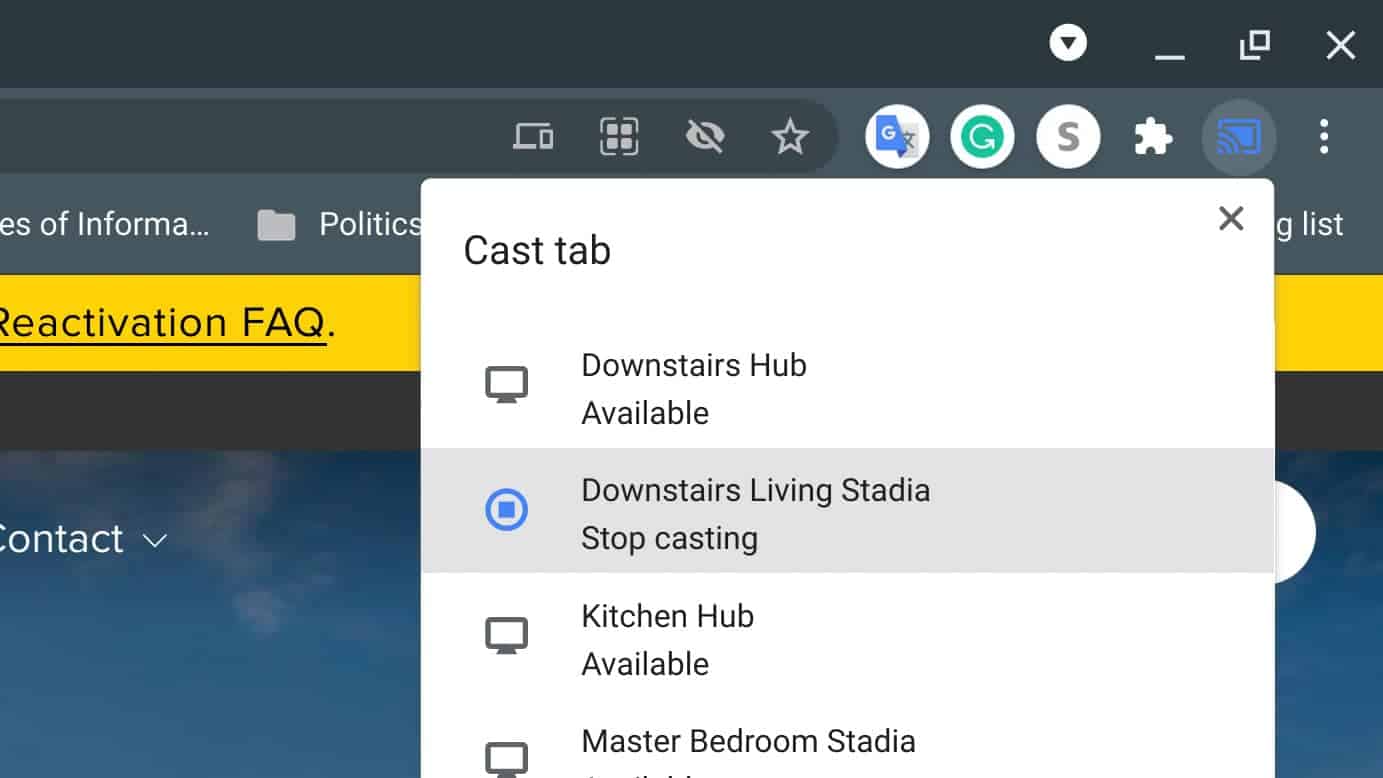 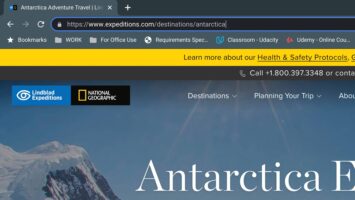 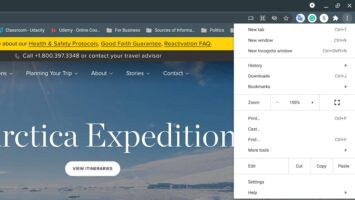 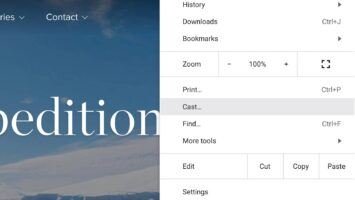 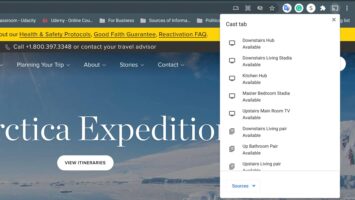 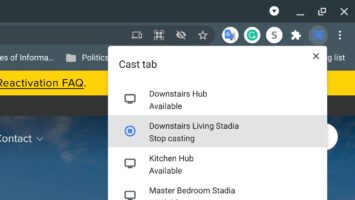