With the Samsung Galaxy Z Fold 3 on the horizon, likely being announced on August 11, 2021. Many are going to be looking towards how they can sell their old Samsung Galaxy  Fold 2, or even an older smartphone, and upgrade to the Galaxy S21. There are a few ways that you can do that, and pay very little for the Galaxy S21, especially if you have a newer smartphone. But you’ll want to do it in the best way for you. Which might be the easiest and/or getting you the most money in your pocket.

Today, we’ll be going over two main methods of how you can sell your old Samsung Galaxy smartphone – or any smartphone – and pick up the Galaxy Z Fold 3 for much less than the regular retail price.

Trade-in with Samsung.com or your wireless carrier

During the pre-order phase, Samsung as well as its carrier partners, will offer up some really impressive prices for those that want to pre-order the Galaxy Z Fold 3. So the best time to trade in your phone is during pre-orders – which are likely to start on August 11.

So how do you do it? Well it’s pretty simple.

When you are pre-ordering your new phone, you’ll be asked if you have an old smartphone to trade in. Tap on Yes, and then choose the phone you have. The website – depending on where you are pre-ordering – will tell you how much you’ll get for your phone. Sometimes it can be as much as $800, for a year-old phone. Which is really impressive. And could be nearly half off of the price of the Galaxy Z Fold 3.

You will need some information like your IMEI available to complete the trade-in.

After you have made your purchase, a trade-in kit will be shipped to you. Where you will be able to send in your phone to Samsung, Verizon, AT&T or T-Mobile. Again this depends on where you buy your phone from. And usually within a week or so, you’ll have your credit for your trade-in.

The good thing about this, is that you will not be without your phone before your new phone comes in. 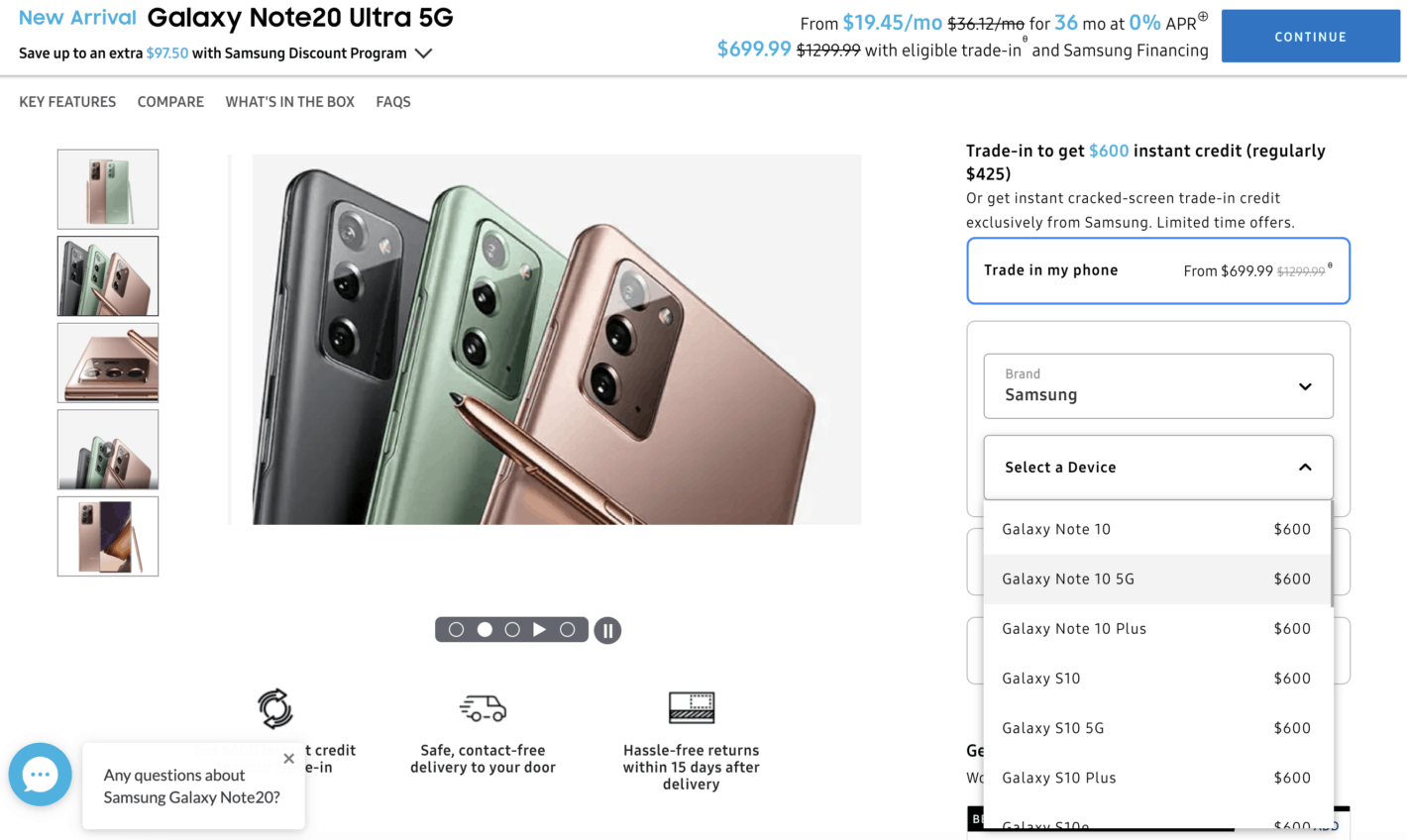 Currently, Samsung is offering up to $600 for the Galaxy S20 series. That might change when the Galaxy Z Fold 3 launches later this month, but it’s also very likely that it won’t.

Selling on a third-party site

Typically, selling your phone will get you more money than trading it in. However, doing a trade-in is usually a lot simpler. And that’s the method I’ve been using as of late. 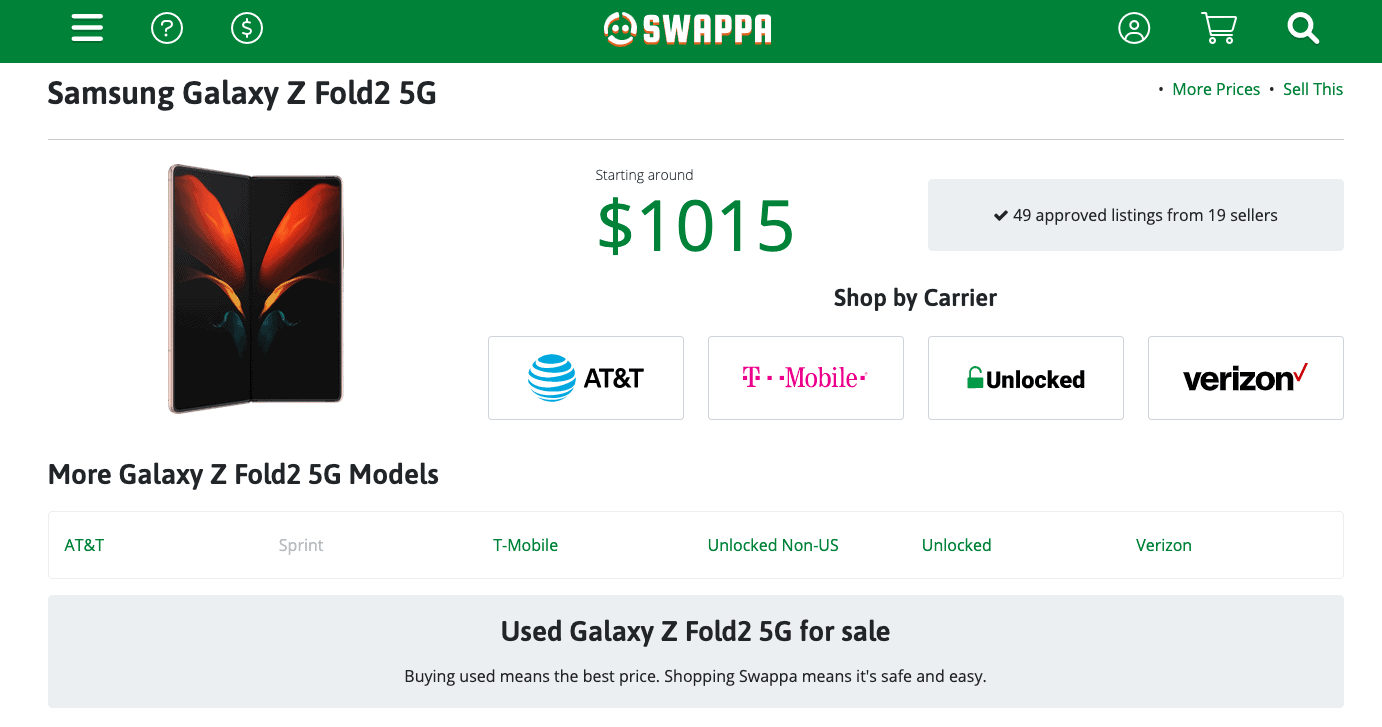 But if you’re okay with being without your Galaxy Z Fold 2 for a few weeks before the Galaxy Z Fold 3 is actually available, then selling it on a site like Swappa will get you the most money for your phone. But do keep in mind that Samsung phones do lose value very quickly – likely due to the amount of phones they release every year. For instance, at the time of writing this, you can sell your Galaxy Z Fold 2 for around $1015. Which is more than what you’ll get by trading it in.

Also keep in mind with selling on Swappa, eBay or even Amazon, you normally have seller fees from those sites. As well as additional fees from PayPal. When you trade-in your device, you don’t have to deal with that, thankfully.

To sell your Galaxy Z Fold 2 on a site like Swappa, make sure you list it at a decent price. You don’t want it to be the cheapest (unless you want to get rid of it as soon as possible) but also not the most expensive.

You will need to take photos of your device for the listing, so potential buyers can see the condition of the phone. And make sure to mention if you are including the box, and any other accessories that came in the box. Like the charger, cable, etc.

You will also need your IMEI to list it on Swappa. On Swappa, specifically, users like to barter and get you down to a lower number. So don’t cave to much, or you may end up not getting much for your phone.

Once it is sold, make sure to erase your data from the phone and remove your Google account – so the buyer is able to sign in and use their new phone. And of course ship it.

One other important thing to note. Is that if you financed your phone through Samsung or your carrier, you can’t sell it if you are still paying it off. However, you usually are able to trade it in. And it’s best to trade it in through the party that you financed it from.

That’s how you can sell your old Samsung Galaxy Z Fold 2. And get ready for the next big thing from Samsung.