Skip to content
Advertisement
Trusted By Millions
Independent, Expert Android News You Can Trust, Since 2010
Publishing More Android Than Anyone Else
32
Today
32
This Week
32
This Month
6629
This Year
116596
All Time
Advertisement Android 12 is officially here and it brings some changes to how screenshots work, including the ability to mark up screenshots. If you’re looking some tips to walk you through how the new tool works, that’s exactly what this guide is for.

Now, taking screenshots has been possible in Android well before version 12 and so has the ability to mark them up. But Android 12 takes that to a completely new level. And the reasons why that’s helpful are really straightforward.

When it comes to taking screenshots, the reason for taking the screenshot typically comes down to sharing. Whether sharing something spotted on a website or in-app, for work purposes, to developers to report an issue or for effectively any other reason. Users tend to take screenshots in order to share their experiences.

Beyond that, users sometimes take screenshots to remember what’s on-screen, and Android 12 will be no different.

Whatever the reason for taking screenshots though, the ability to mark them up, especially in Android 12, serves a connected purpose. Namely, allowing attention to be called to on-screen elements. Or text. Or adding text for a meme or to illustrate a point. There really aren’t any bounds on the features.

The addition of new mark-up tools, to that end, brings new possibilities. Whether for conciseness, for fun, or for any other reason. So knowing how to use the tools is all but required to get the best experience.

Start by working out how to get to the markup UI

Of course, the first step to adding a mark-up to screenshots in Android 12 or other versions is learning to take them, to begin with. Fortunately, we have some helpful guides for devices that are a bit different. Such as on the Samsung Galaxy Z series handsets. Or on newer OnePlus-branded gadgets. There are also some handsets that include the tool in the Quick Tile settings above the notification shade. But nearly every Android handset or tablet should also be able to utilize the following steps. 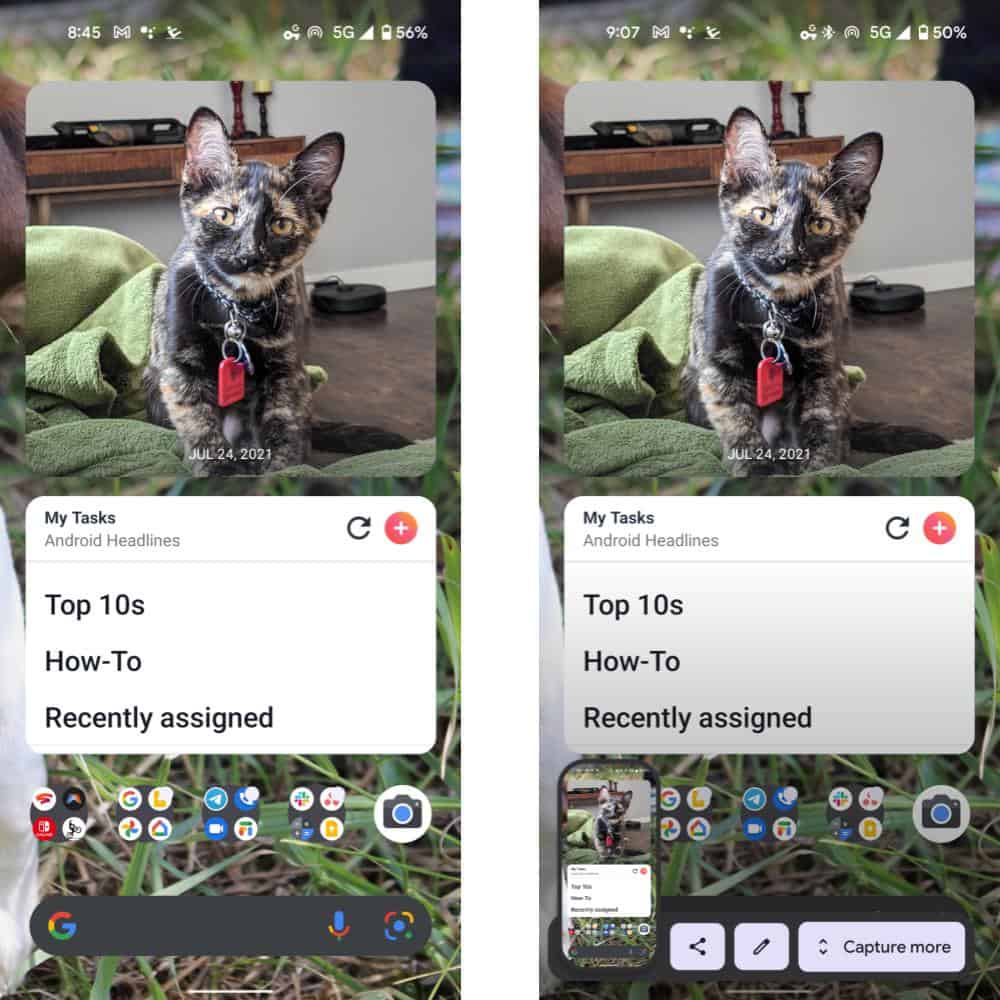 Mark up your screenshots

Now, scrolling screenshots are the biggest change to the feature in Android 12. That means that you won’t need some specialty version of the feature made by a phone’s OEM to take shots of the entire screen. That can be accomplished simply by pressing the “Capture more” button. Followed by selecting whatever part of the screen you’d like to capture.

Otherwise, the markup tools are actually very similar to what’s found in Android 11 and even earlier iterations. With a few new options to play with.

Regardless of which type of screenshot you’ve chosen to take, however, the following options should be available on your handset. As long as it’s updated to Android 12.

Crop your screenshots in Android 12

The most commonly used mark-up tool in Android, let alone Android 12, is arguably going to be cropping. With cropping, you can choose to cut away some of the excess screen real-estate you’ve captured. Instead opting to only capture whatever portion you initially wanted. Add some text to your Android 12 screenshots

Arguably second only to cropping, the addition of text to an image can really bring out the moment that’s been captured. Or, conversely, can be used to create memes, add context, draw attention to a specific detail, and more. So learning to add some text to screenshots using Android 12 is going to be incredibly useful to many users. And it’s fairly easy to accomplish too. Draw, highlight, or erase on your screenshots in Android 12

The final segment of this guide, at least in terms of adding things to screenshots in Android 12, covers drawing tools. Including the eraser tool. The tools here are particularly useful since they can highlight or add attention to on-screen details. Or be used to cover up details that you’d rather not share. Make a bigger mistake? There’s a couple of ways to fix it

Now, having access to an eraser can be great for smaller edits. But, for larger edits with multiple different mark up types on screenshots in Android 12, the eraser isn’t always precise enough. In those instances, mistakes can be fixed in a couple of different ways.