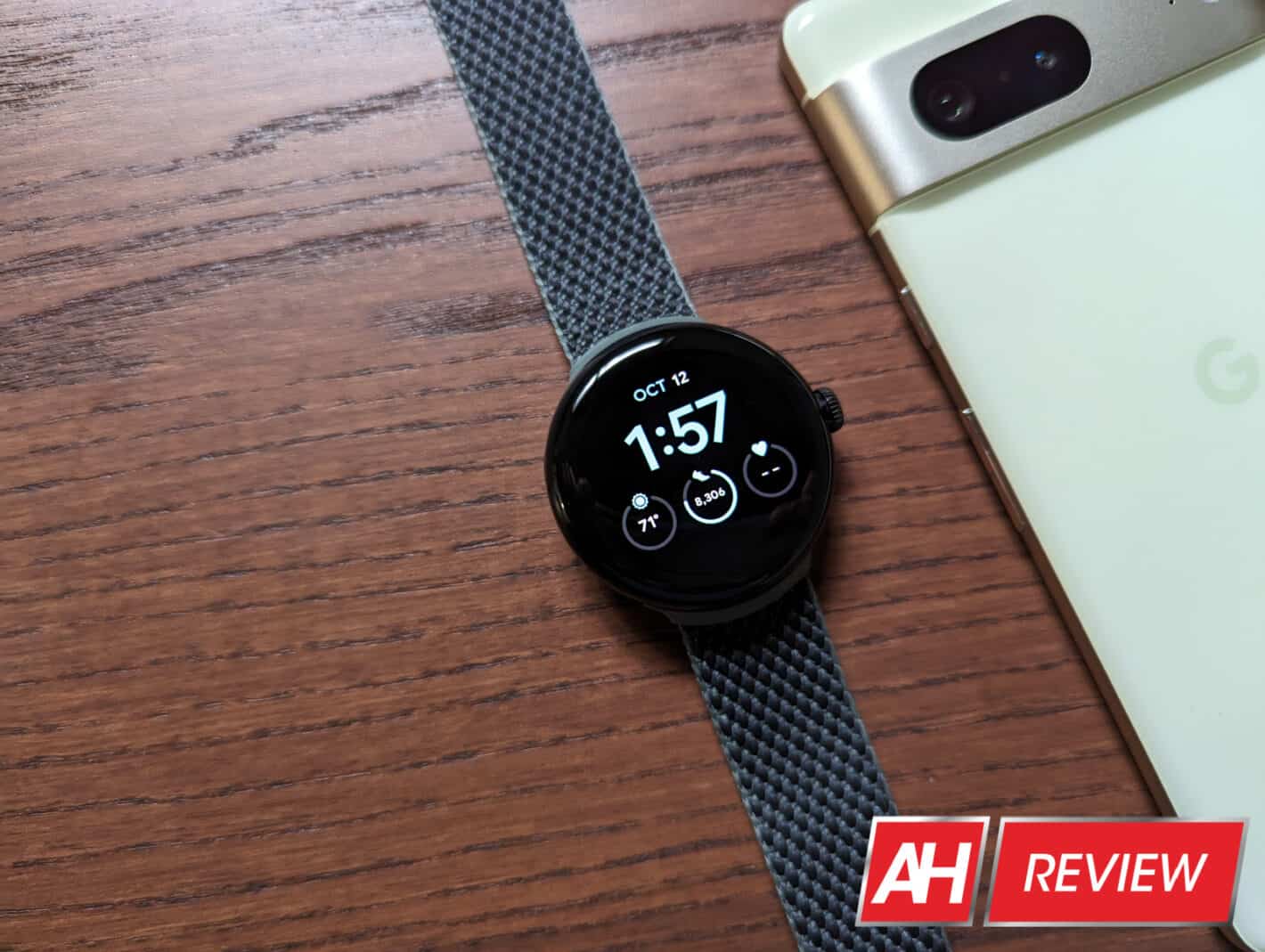 The Pixel Watch hits almost all of the right notes, and misses on one major note.

Google provided us with the obsidian Pixel Watch LTE, and we’ve been using it for a little over a week before forming this review.

It took Google eight years to produce its own watch, after debuting Wear OS back in 2014. Which was originally Android Wear, then Wear OS by Google and now just Wear OS. So does it disappoint? Should you buy this over the Galaxy Watch 5? Let’s find out in our full review.

Despite the big bezels on the Pixel Watch, it still feels like a really well-designed, high-end watch. Which is interesting, coming from Fitbit and Google. Fitbit’s watches have never really felt or looked good or high-end. Google says that they made the watch to resemble a pebble. Which is rather fitting since Fitbit bought Pebble and Google bought Fitbit. And you can really see that in the watch.

We have the Obsidian color here, which is black all around. But there’s also warm gold and silver, which have the bottom half of the watch in silver and gold – or more like a hazel. So every color is going to look black, from head on. Which is perfectly fine. And that means that all of the bands, in many different colors will work perfectly with it. 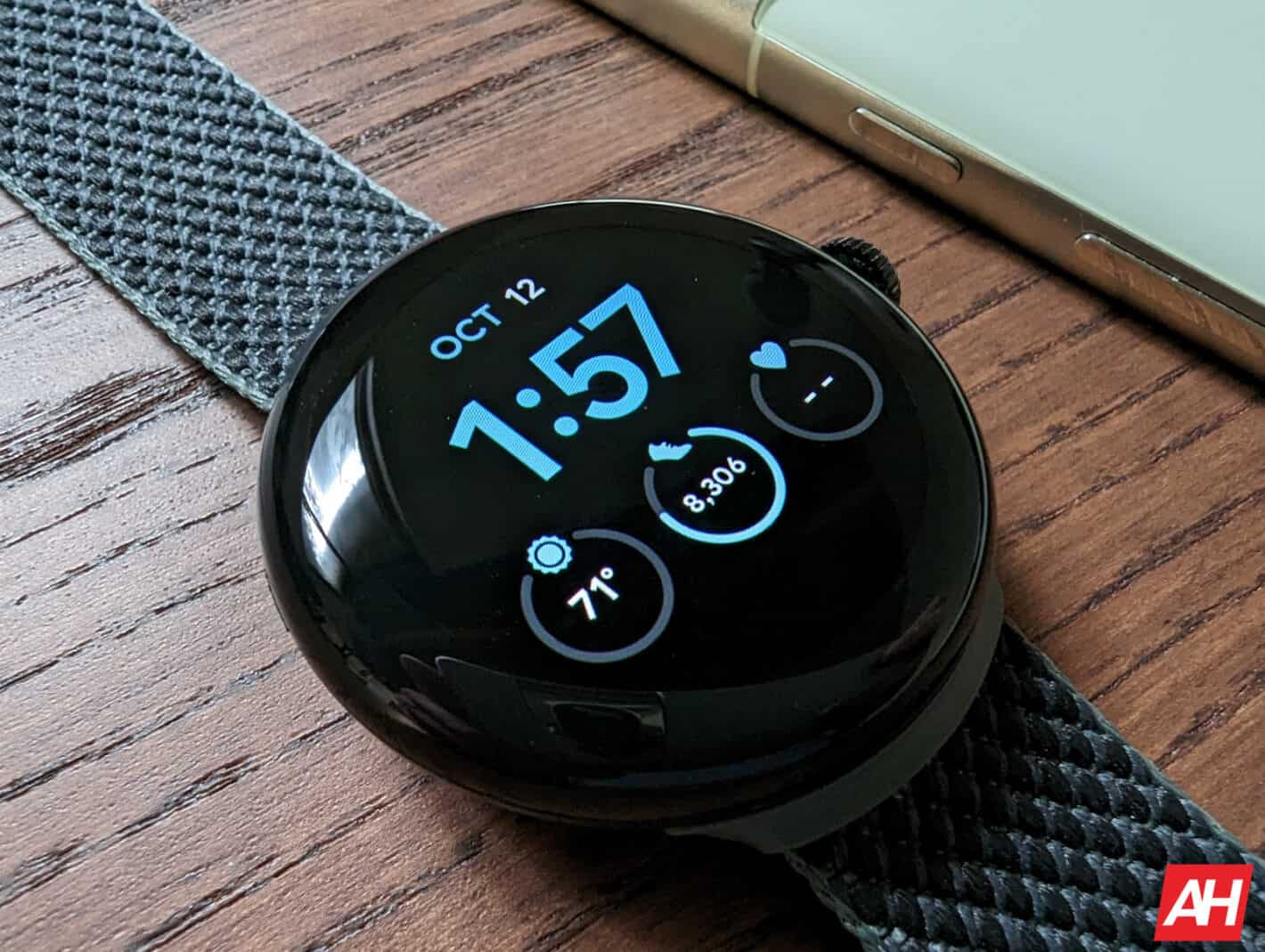 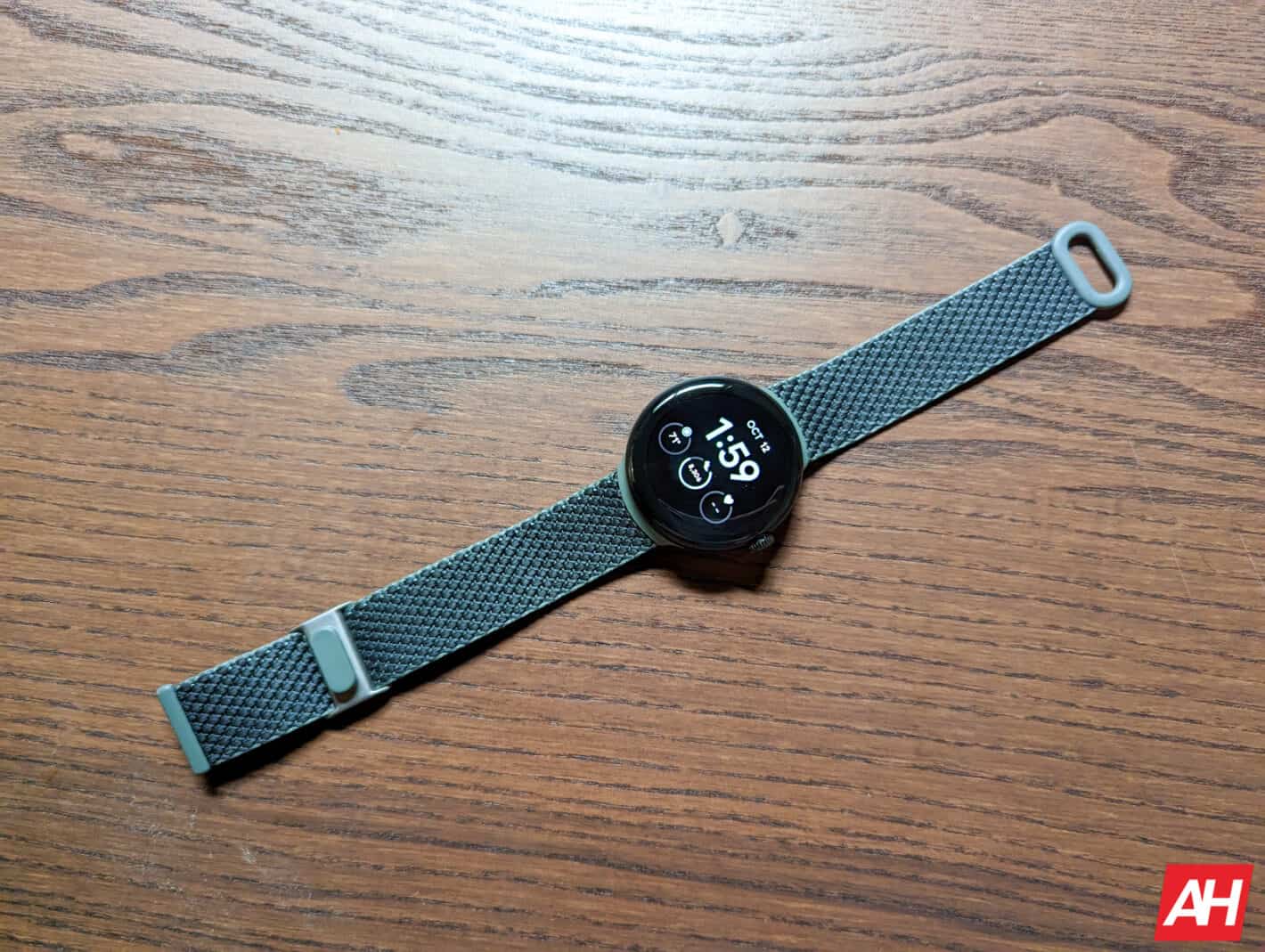 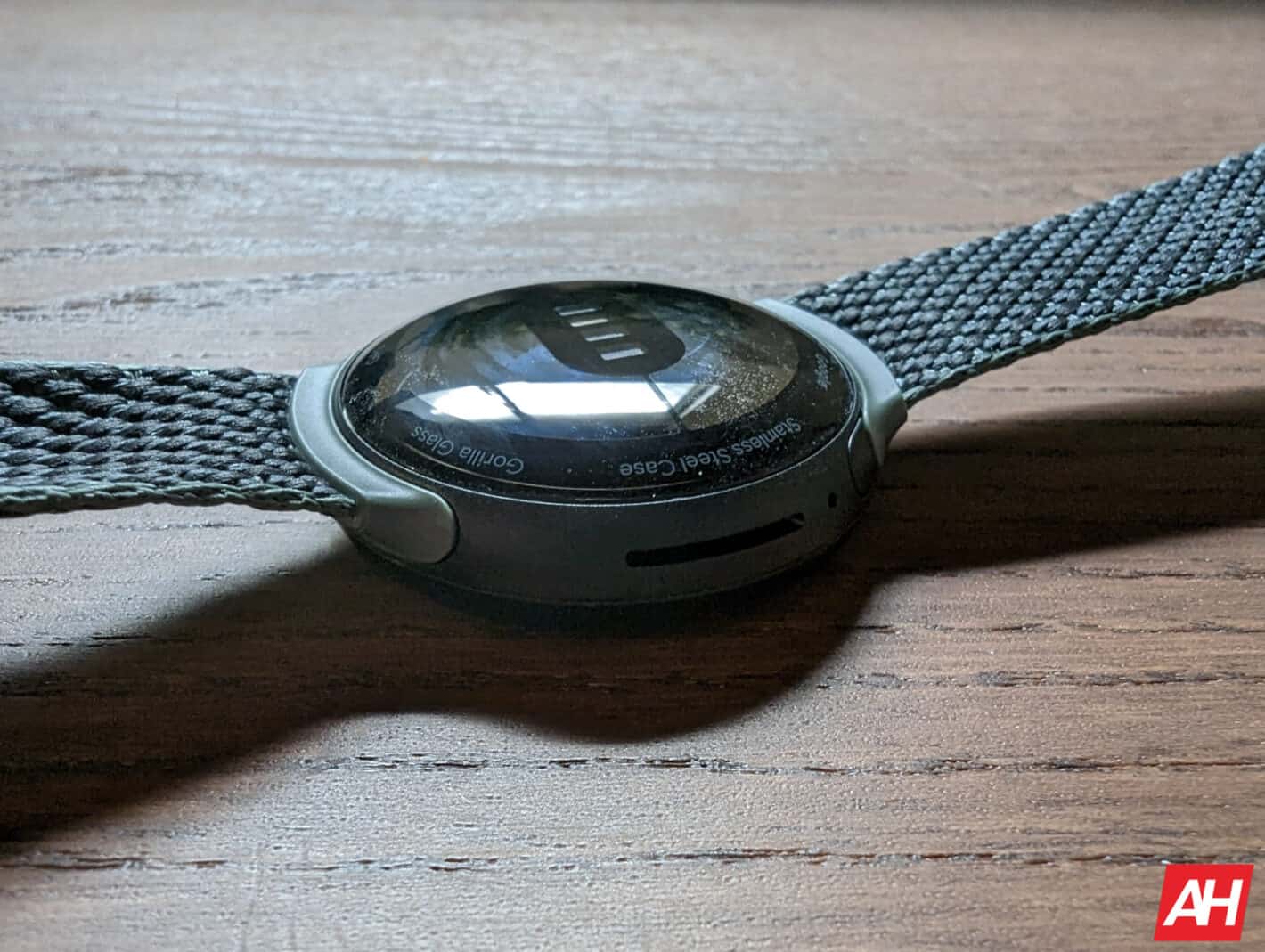 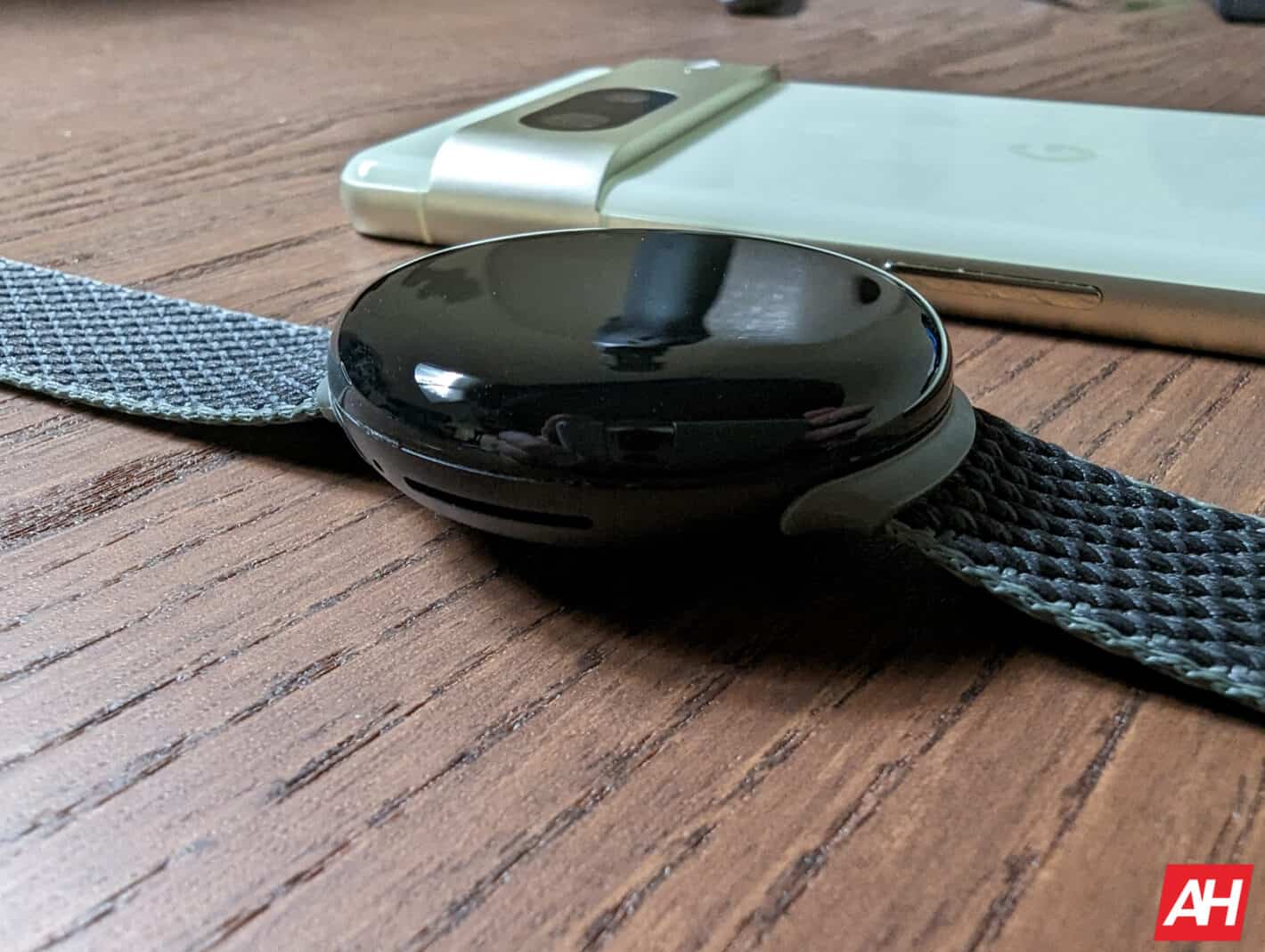 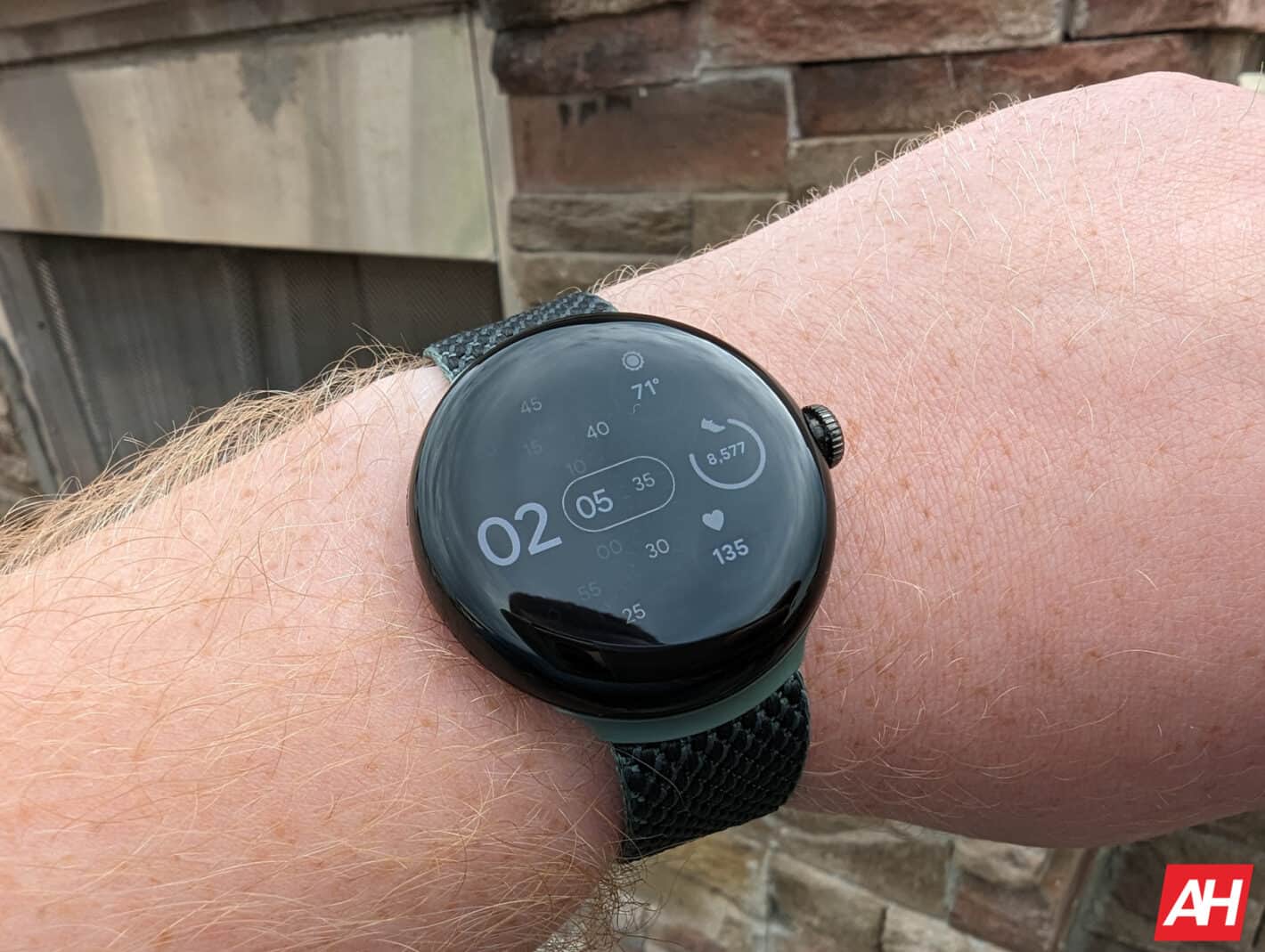 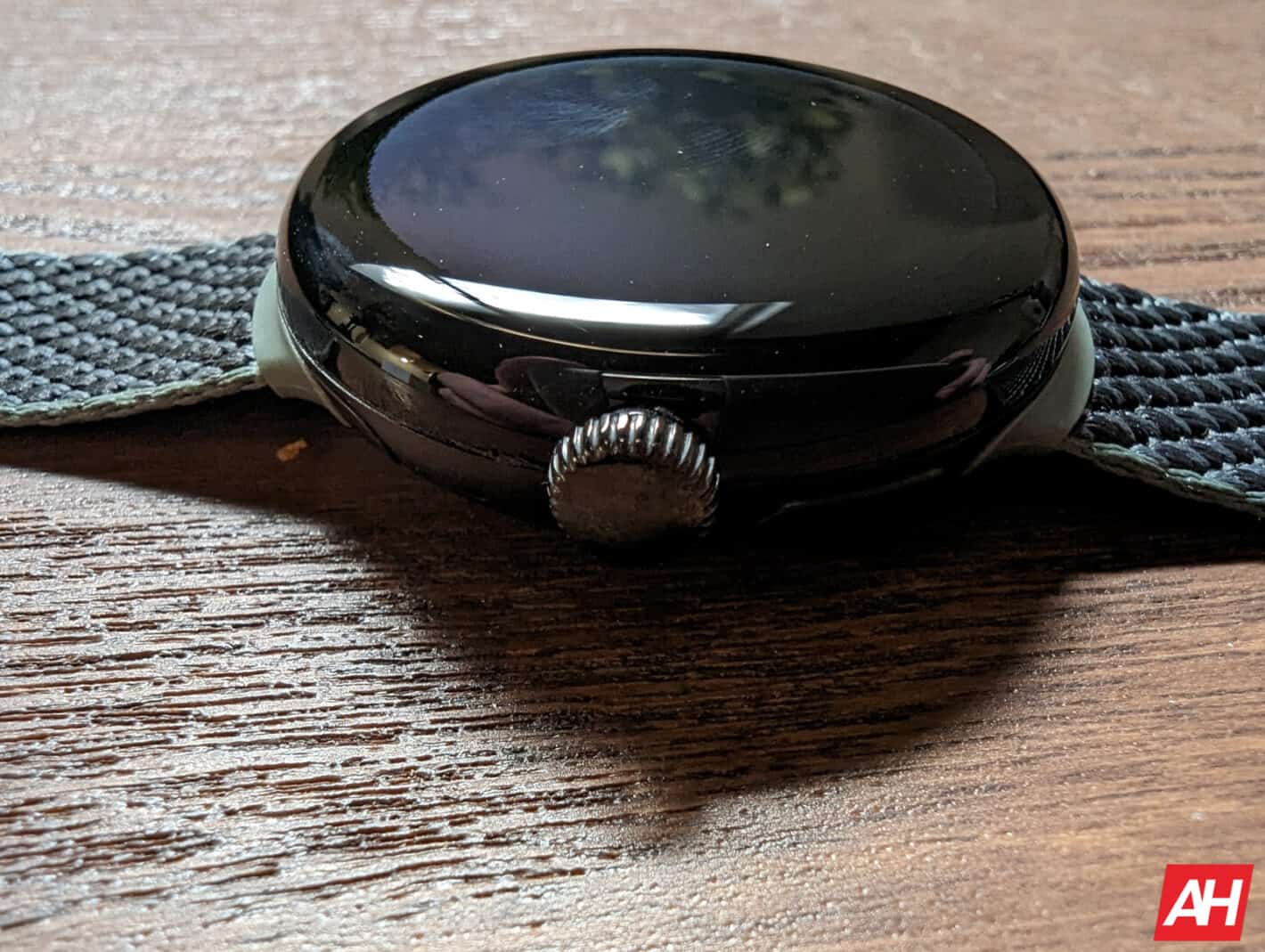 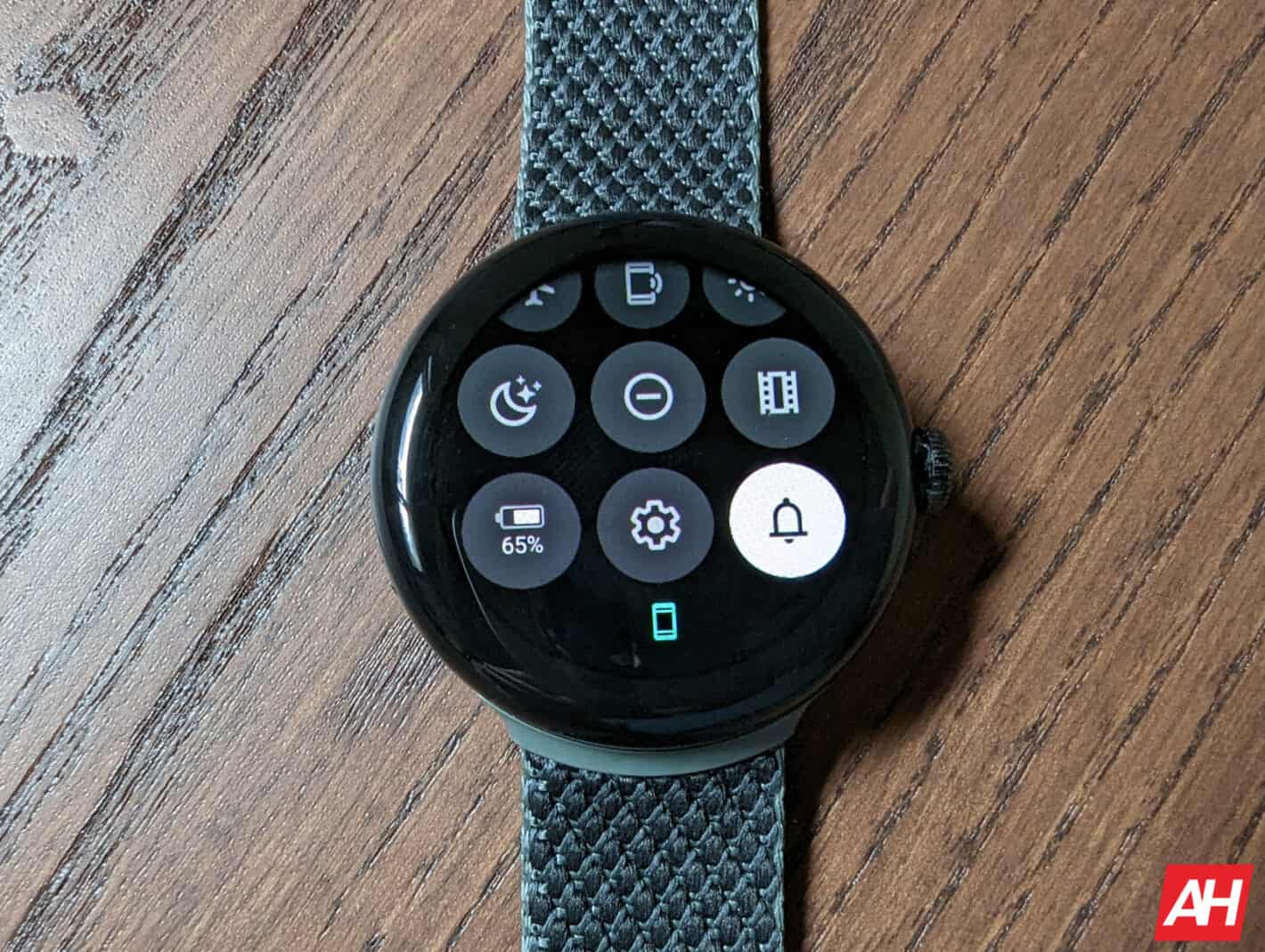 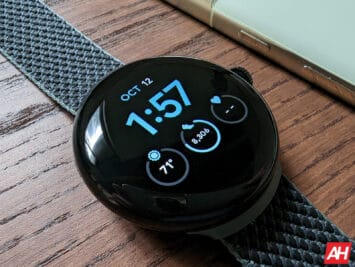 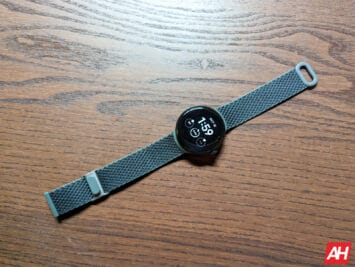 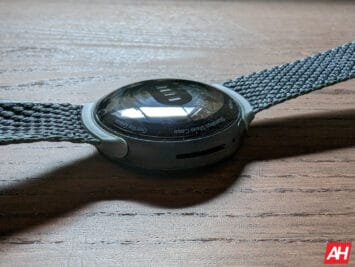 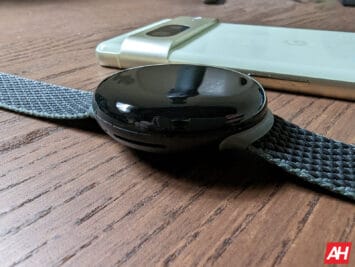 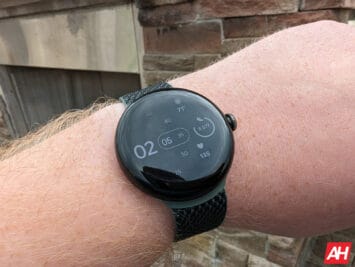 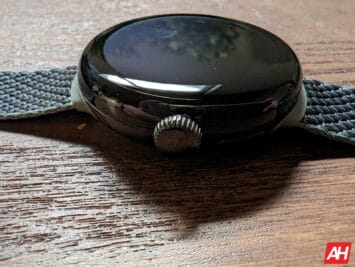 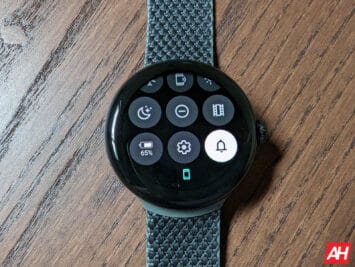 There’s a digital crown on the side, in the center. This can be used to navigate the OS as you might expect. It works well, but the scrolling speed does seem to be rather slow. Often times, I usually just opt to use my finger to swipe on the screen. There is also a button above the crown, but it’s on the lower half of the watch. It’s a bit out of the way, and this is really only used for recent apps, or you can hold for Google Assistant. I really wish one of those opened up Google Wallet, like it does for Apple Wallet on the Apple Watch.

On the bottom, it’s glass still, and has all of the sensors that you’d expect. It also has the wireless charging magnets there. Speaking of wireless charging, it can’t charge on anything but the Google Pixel Watch charger. Not even using Battery Share on the Pixel 7, it’ll start charging and immediately stop. The same thing when I put it on other Qi Wireless chargers, or the Apple Watch charger. That’s a major oversight for Google, in my opinion. Why can’t this charge, at least on the back of my Pixel 7 Pro? That’s a good way to get some extra juice when you’re on the go.

Finally, let’s talk about the bands here. They are basically copies of the Fitbit bands for their smartwatches. That’s not necessarily a bad thing, since Fitbit’s team was really the one in charge of this watch. But some of the bands just feel so cheap, for a $350 watch (or in the case of our review unit, a $400 watch). Like the Stretch band. It’s super thin, and it really felt like if you were walking and got it caught on something, the band would be destroyed. It also looks like you’re wearing a sock, not necessarily the look I’d want. But the Woven bands are a nice step up. Still lightweight, but a bit more classy than the leather bands that are pretty pricey.

Now, swapping out the bands is a bit odd. Like Apple, Google has also decided to go ahead and reengineer how to remove bands. So you press this button on the side of the band on the watch, then slide the band over, to remove it. The first couple of times, it’ll take a bit to get used to, as it is pretty strange. Hopefully you won’t be swapping bands everyday.

All that, and I didn’t even mention the size of the watch. It’s quite small. It’s a 41mm size watch, which is the same size as Apple’s smallest Watch, but when you put it on side-by-side with an Apple Watch, it is definitely looking smaller, but also thicker. That is likely due to the circular display here. Which, I know, a lot of people prefer, but the square display that Apple uses makes it more functional.

For a lot of people, this small watch size is going to be a sigh of relief, as not everyone has huge wrists. This is definitely great for women too. But the flip side of that is, poor battery life. Which we’ll talk about next.

So, when Google was on stage talking about the Pixel Watch, they mentioned that battery life was rated for up to 24 hours. And put a lot of emphasis in the “up to” part of that statement. While I’ve been using this watch for a little over a week, it really only hit 24 hours or more, twice. So I asked Google for some clarification on this.

Always-on Display was off by default, so I kept it off for my testing here. I’m almost afraid to turn it on and see how long it’d last. Since some days it only lasted around 15 hours. The best way to conserve power is likely going to be to limit what notifications you get. Maybe just messaging apps and emails.

An interesting tidbit I did notice is that, once I set this up with LTE connectivity on Google Fi, battery life did improve. Now that could be a placebo affect, as I only used it a couple days without LTE. But still worth mentioning.

The Google Pixel Watch is running on Wear OS 3.5, which is only available for the Samsung watches (Galaxy Watch 4 and Galaxy Watch 5 series) and a Montblanc watch that’s super pricey. So this is the first time I’ve really used Wear OS 3.5. It’s also the first time in a few years I’ve used Wear OS. It’s still not as optimized as I’d like for a watch, but with the added RAM and more powerful processor, Wear OS 3.5 is so smooth and fluid.

I’ve been wearing the Apple Watch for the last two years, which is why I’ve compared it a lot in this review. And it’s software is very smooth. Really no hiccups at all on it. But the Pixel Watch is even smoother than that. Which is very impressive to be honest.

Let’s start with the app. The Pixel Watch is a Wear OS watch, but doesn’t connect to the Wear OS app. Instead, it uses the Pixel Watch. Which once your phone sees the Pixel Watch, it’ll automatically download it so you can set it up. It’s a pretty simple app, but with Wear OS 3 and later, manufacturers have to make their own apps for Wear OS.

Right at the top of the app, you’ll find the Watch Faces and tiles. Followed by some other settings that you can adjust. There’s not many settings available in the app actually. Google has it sort of spread out for no real reason it seems.

But let’s talk about the watch faces. There aren’t many here, but since it is a Wear OS app, there’s plenty in the Google Play Store. The few that are here (around 19) are actually pretty good. Giving you some nice complications on the watch face like the weather, battery percentage, Fitbit stuff, and more. Most of them are black backgrounds, so that thick bezel doesn’t really stand out. Thanks to this being an AMOLED display.

Then there’s Tiles. This is a feature that I think Apple really needs to copy. Basically, full-screen widgets that sit to the side of the watch face. So you can swipe over to see things like the weather, or your Fitbit stats, YouTube Music, your next alarm and much more. It’s super useful, and better than loading up a full-on app.

As mentioned, the software is really good here. It’s still not perfect, and it’s going to be exciting to see how Google improves it over the coming months. Since it will be getting the quarterly feature drops like a Pixel smartphone, as well as yearly Wear OS updates. Which Google has said they want to start doing.

Fitbit integration gives Google a leg up over Samsung

When it comes to fitness tracking, no one does it as well as Fitbit. Part of this is because Fitbit has been around for so long and has so many trackers out there in the wild. Which allows them to collect data and improve features, also adding new features. Fitbit’s competitions and challenges are also better than just about everyone else. So having them on the Pixel Watch is awesome.

If you’ve used a Fitbit tracker, then you know what to expect from this Pixel Watch when it comes to fitness tracking. It’s basically the same experience. But it does not have Fitbit’s automatic workout tracking. Well, it does and doesn’t. With other watches, it’ll pop up and say “are you working out” and ask if you want to track it. On the Pixel Watch, it’ll automatically track any workouts longer than 15 minutes (by default, you can adjust this in the Fitbit app). But you won’t see the stats until after you’re finished. That’s fine for me, but some might want to see that on their wrist while they are working out.

Now, this does mean you need to download the Fitbit app, which the Pixel Watch app will tell you to do, in setup. You can easily sync your accounts together and start using Fitbit on the Pixel Watch. This also means that the Google Fit app is basically dead. That does suck for those that have been using it for years on other Wear OS watches. Google hasn’t said that Fit is dead, in fact it just got updated this week, but it basically is.

Should I buy the Pixel Watch?

That’s the question. Should you buy the Google Pixel Watch? This is a question that I’ve been struggling with for almost a week now. There’s so much to like about the watch, but a big issue is the battery life. Is it really that hard to give consumers a smartwatch that can last more than a day? The only real watches that can, are dumb or hybrid watches. Yeah there are some factors involved here like keeping it lightweight and small, which affects the size of the battery. But I don’t want to be tied to a charger all the time with my Pixel Watch.

It’s also fairly expensive. Since the Galaxy Watch 5 starts at $279 for a similarly sized model. That’s $70 less, and definitely has better battery life. But then, the Pixel Watch gives you the Pixel experience, as well as Fitbit, and will get quarterly updates with new features.

So my recommendation is, get the Pixel Watch if you’re okay with this battery life, and really, really want the Fitbit integration. If not, go with the Galaxy Watch 5, we reviewed that back in August and found it to be really impressive.