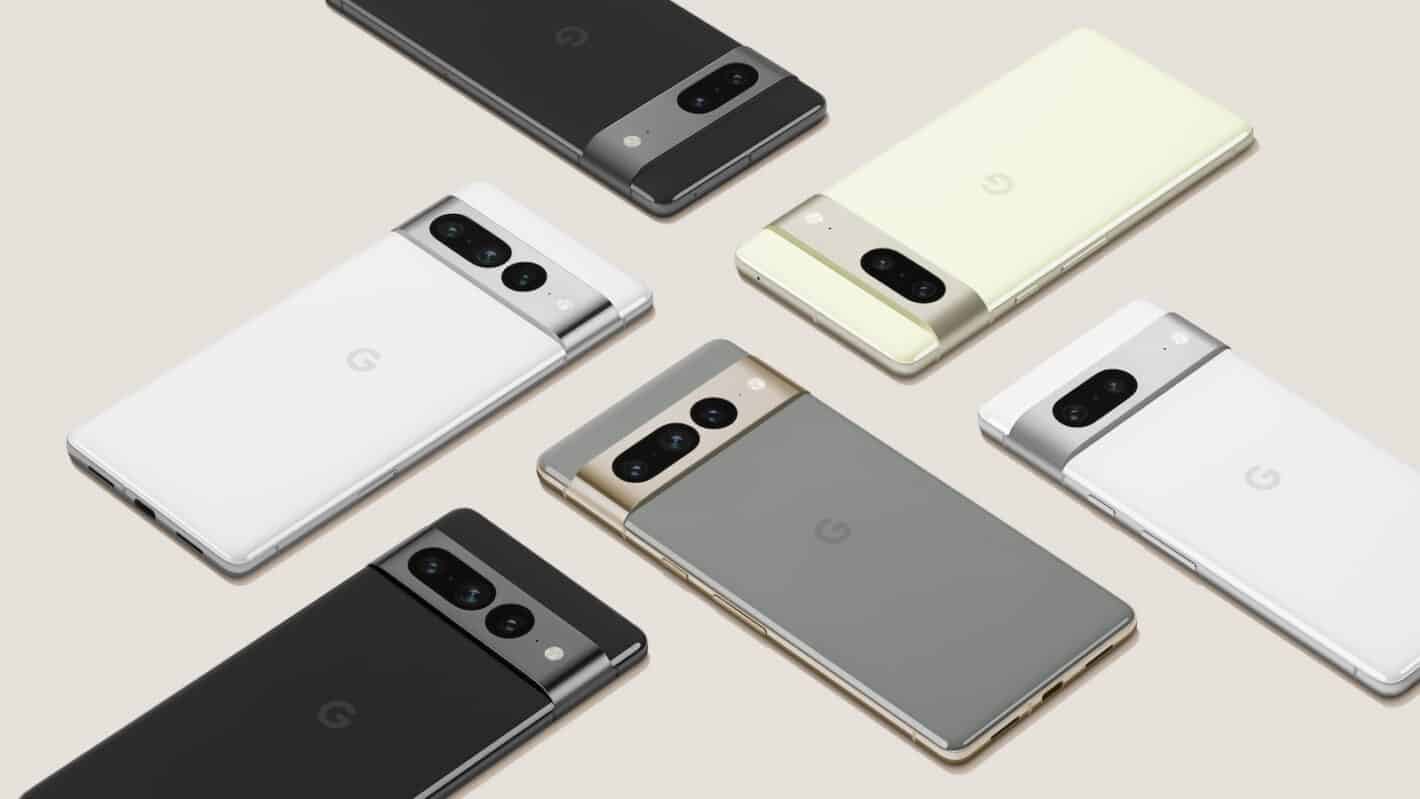 Google has replaced its Nexus smartphone lineup with the Pixel series. This change happened back in 2016, when the first two Google Pixel smartphones arrived. With this change, Google more or less indicated that it’s done making affordable flagship-grade phones aimed at developers and enthusiasts, and that it wants to bring its smartphone creations closer to regular consumers.

This managed to disappoint quite a few people who loved the company’s Nexus line, but they had to make their peace with it, and move on. Since the first two Pixels, Google announced a number of new ones (including some mid-range ones), and we’re here to take a closer look at all of them, basically, as we’re here to take a walk down the memory lane, if you will. Do keep note that new Pixel phones will be added to the list as they arrive, that includes both flagship and non-flagship devices, in this case. 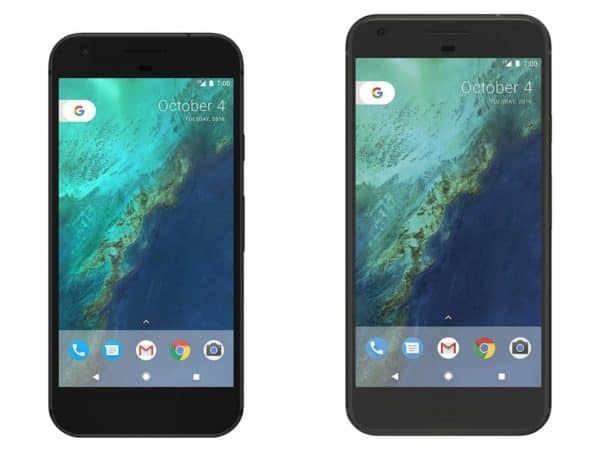 Google had announced two smartphones as part of the Google Pixel lineup back in October 2016, the Google Pixel and Pixel XL. These are the first two Pixel smartphones the company ever announced. They offer a considerably different design than any Nexus device the company introduced up to that point. The two phones look identical, but they are different in terms of size.

The Google Pixel and Pixel XL are made out of metal and glass. Most of the back on these two phones is covered by metal, but the upper portion has a glass plate applied to it. Bezels on the two phones are quite thick, even for the time period they were released in, and their design is nothing spectacular, but it did stand out back then. Both phones originally shipped with Android 7.1 Nougat.

These two devices are both fueled by the Snapdragon 821 64-bit quad-core processor, while both of them include 4GB of RAM, and come in 32GB and 128GB storage flavors. Neither of them offers storage expansion, and a 12.3-megapixel camera is included on the back of both devices, and was considered to be amongst the best in the class back then. Both devices are splash and dust resistant, and they include an 8-megapixel front-facing camera. 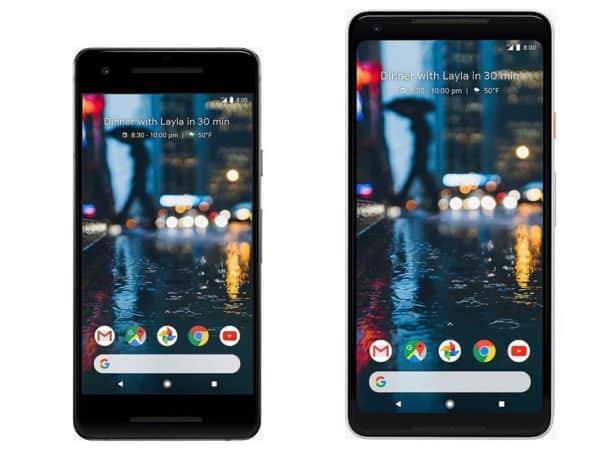 The Google Pixel 2 and Pixel 2 XL were introduced back in October 2017. These are the company’s second-gen Pixel flagships, and unlike the Pixel and Pixel XL, these two do not look identical. The Pixel 2 comes with considerably thicker bezels than the Pixel 2 XL. That is the main difference between the two phones, in addition to the fact they’re different in size as well.

The design of the back on these two devices is similar to the Pixel and Pixel XL, in all honesty. They both have that glass plate on the back, though it is much smaller this time around. Most of their back side is made out of metal. Both of these phones include stereo speakers, and both have OLED displays, but different OLED panels. The Pixel 2 ships with a regular AMOLED display, while the Pixel 2 XL includes a P-OLED panel.

The Google Pixel 2 features a 5-inch fullHD display, while the Pixel 2 XL comes with a QHD+ display. Both devices are fueled by the Snapdragon 835 64-bit octa-core processor, while both include 4GB of RAM and 64GB / 128GB of non-expandable storage. Android 8.0 Oreo shipped out of the box on these two phones, while both of them include a single 12.2-megapixel camera on the back. The Pixel 2 features a 2,700mAh battery, while the Pixel 2 XL packs in a 3,520mAh unit. 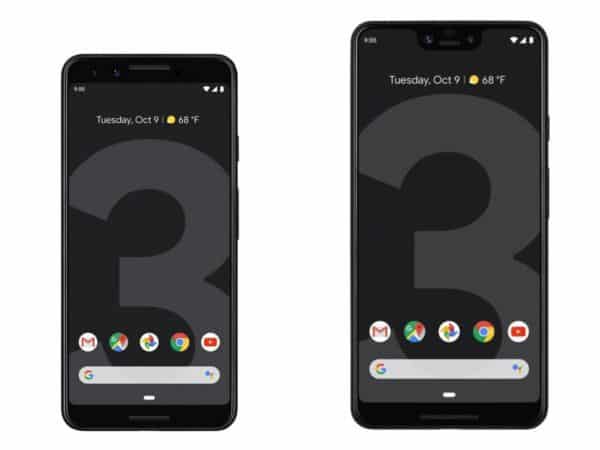 The Google Pixel 3 and Pixel 3 XL were announced in October 2018, and are Google’s third-gen Pixel flagships. These two phones, much like the Pixel 2 and Pixel 2 XL, do not look identical. They do have identical back sides, reminiscent of the Pixel 2 series back, but the front sides are different. The Pixel 3 does not include a display notch or a hole, but it has noticeable bezels above and below the display. The Pixel 3 XL has a similar bezel below the display, but not at the top. Instead, Google opted to include a rather tall / large notch at the top of the display.

Both the Pixel 3 and Pixel 3 XL include 4GB of RAM and 64GB / 128GB of storage, though it is worth noting that storage is not expandable here either. Android 9 Pie comes out of the box on these two phones, while a 12.2-megapixel camera sits on the back of each of these devices. Two 8-megapixel units are included on the front side of both phones, while both devices are IP68 certified for water and dust resistance. 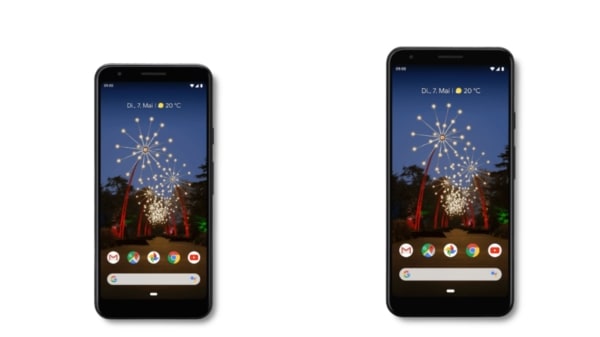 In May 2019, Google introduced its very first mid-range Pixel smartphones. As part of this series, the company announced the Pixel 3a and Pixel 3a XL handsets. These two phones look the same, and basically pack the same specs, save for the display and battery sizes. Both devices resemble the Pixel 3 quite a bit, but unlike the Pixel 3, they are made out of polycarbonate.

A regular, capacitive fingerprint scanner sits on the back of these two phones. You will also notice a single camera back there. That is a 12.2-megapixel camera, the same on that the company included in the Pixel 3 and Pixel 3 XL. With this camera, the company basically brought its flagship feature to mid-range devices. That camera is the main selling point of these two phones, along with their price tags. 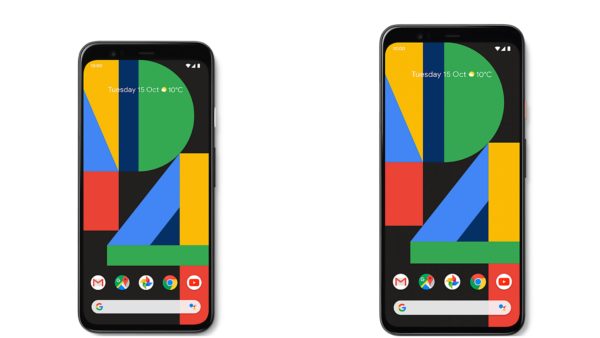 Google announced two Pixel 4 flagships in October 2019, the Pixel 4 and Pixel 4 XL. Those two devices are different in size, but sport the very same design. Both are made out of metal and glass, and were initially launched in three color variants. Google introduced both devices in Just Black, Clearly White, and (limited edition) Oh So Orange variants. Out of all three variants, only the Just Black model has a glossy backplate.

The Google Pixel 4 and Pixel 4 XL are less slippery than most other flagships in the market. At least they were at the time they launched. Both phones have a rather large “forehead”, which host various sensors. Sensors for advanced facial scanning are included. The same goes for a radar chip that enables “Motion Sense”. A front-facing camera is also included, and your regular smartphone sensors. Google did not include a fingerprint scanner on either of these two smartphones.

The Pixel 4 series devices are the first phones in the series to offer two rear-facing cameras. In addition to the main 12.2-megapixel camera, a 16-megapixel telephoto unit is also included. The Snapdragon 855 fuels both the Pixel 4 and Pixel 4 XL, and both phones include 6GB of RAM. Android 10 comes pre-installed on both of these devices, while both offer front-facing stereo speakers. 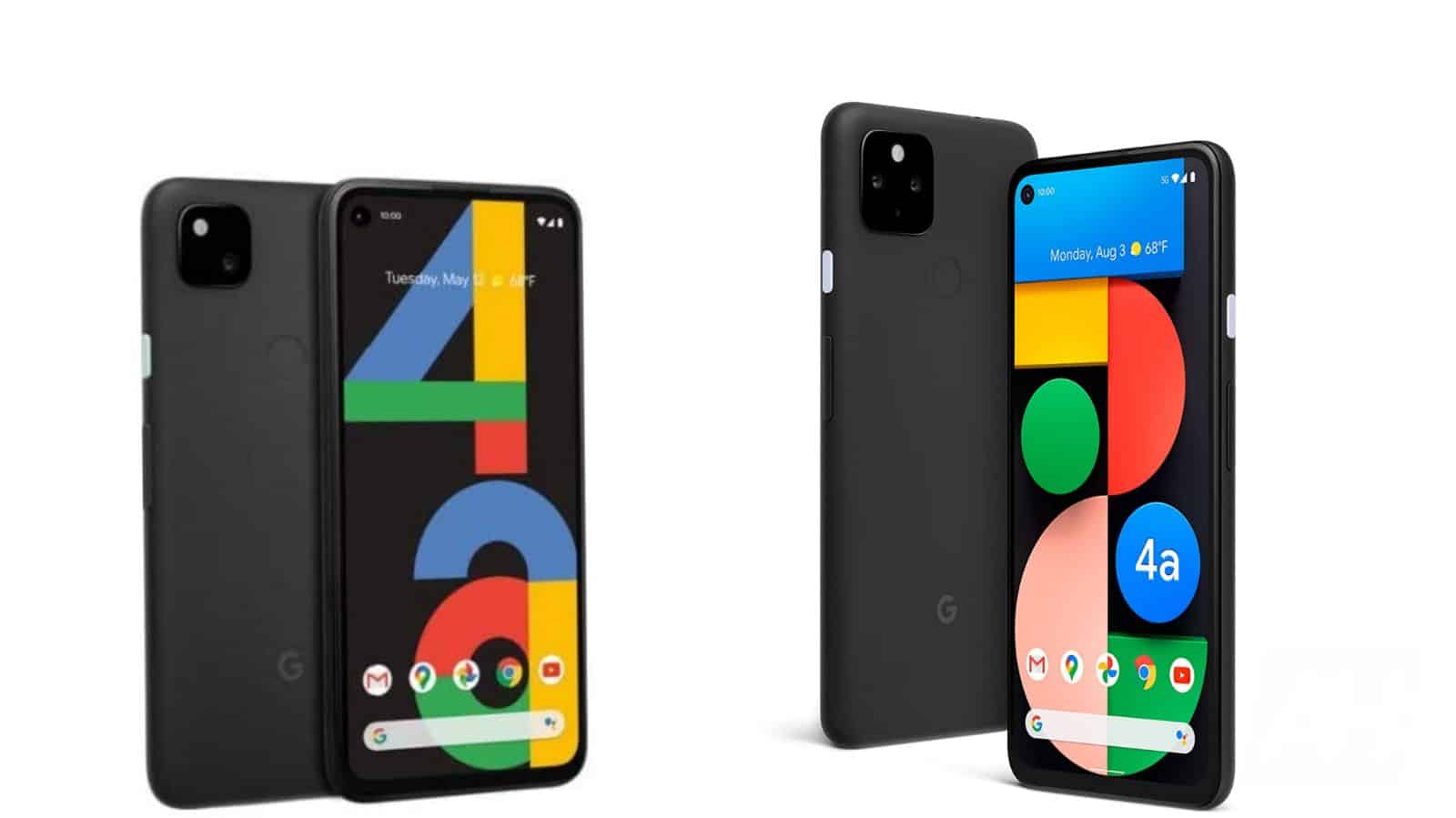 They do look almost identical, but their internals are somewhat different. The Pixel 4a 5G has an ultra-wide camera on the back, unlike the Pixel 4a. It also includes a more powerful processor on the inside, along with 5G connectivity. The phone has a larger display, though the refresh rate is the same, and so is the resolution. Due to its larger size, the Pixel 4a 5G does pack in a larger battery than its sibling. The rest of their specs are pretty much the same. 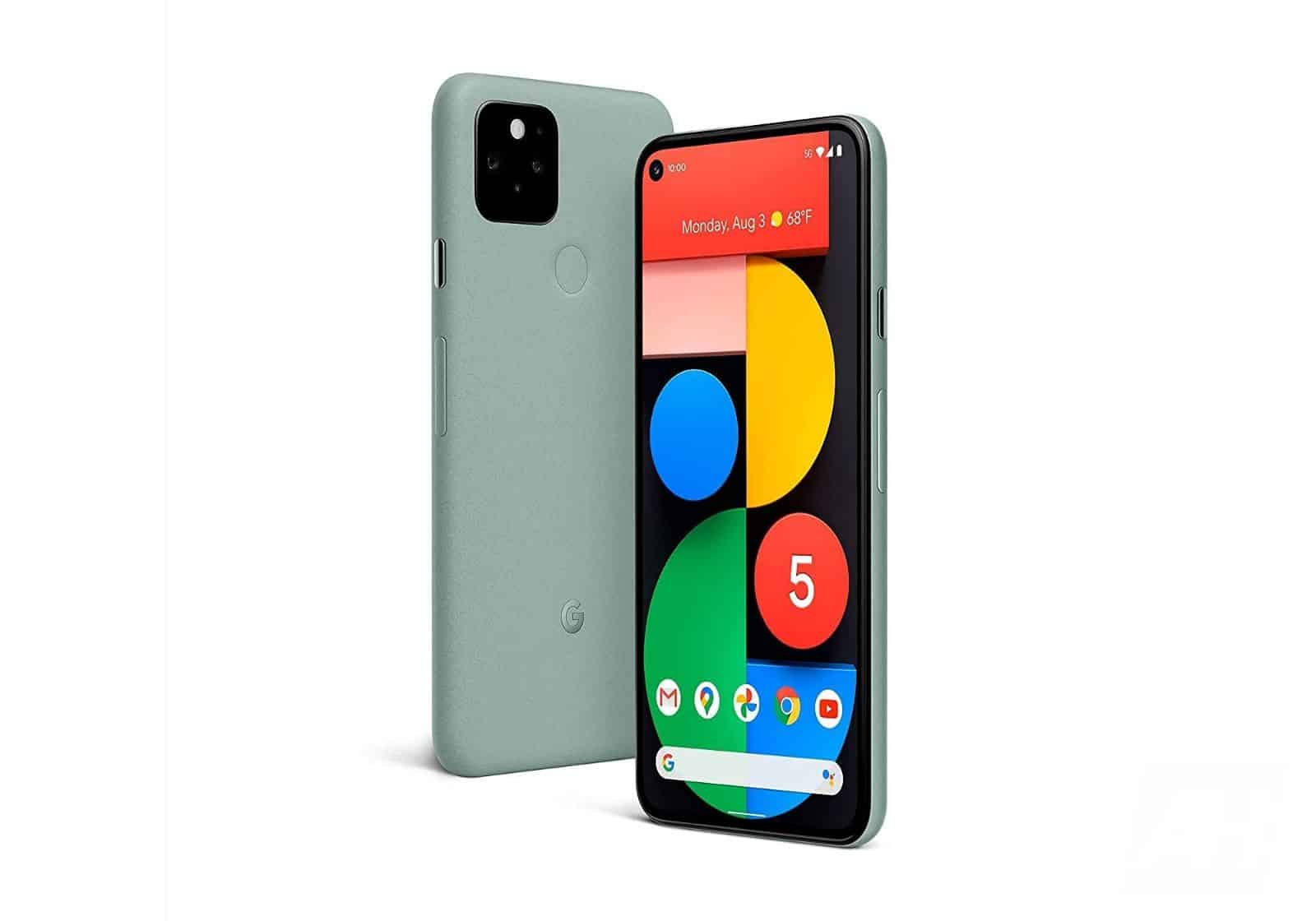 The Google Pixel 5 was announced in September 2020, as Google’s best 2020 smartphone. It shares some of its internals with the Pixel 4a 5G, but it does have some advantages. This phone is made out of metal, though it comes with a resin cover on top of it. Its bezels are uniform, which means there’s not pronounced ‘chin’ on this phone. The device has a display camera hole in the top-left corner, like its siblings.

The device is fueled by the Snapdragon 765G SoC, the same chip that fuels the Pixel 4a 5G. It comes with a 6-inch fullHD+ display with a 90Hz refresh rate. The camera setup is the same as on the Pixel 4a 5G, while the device also shipped with Android 11 out of the box. The phone is IP68 certified for water and dust resistance, while its secondary speaker is placed under the display. A rear-facing fingerprint scanner is included on this phone.

The Google Pixel 6 and 6 Pro were announced in October 2021. These two phones represented Google’s return to the premium tier smartphone space. They are considerably different than what Google offered a year before, not only when it comes to specs, but design as well. These two phones ushered in Google’s new, bold design, that is easily recognizable.

They are significant for a number of reasons. This was the first time, since 2017, that Google used a different main camera sensor. The ISOCELL GN1 from Samsung ended up being used here, replacing Sony’s aging sensor Google preferred. On top of that, both of these smartphone are equipped with the Google Tensor SoC, Google’s first-ever smartphone processor. As if that’s not enough, they are also the first smartphones from the company to include an in-display fingerprint scanner.

The two phones have high refresh rate displays, a 90Hz and 120Hz on the Pixel 6 and 6 Pro, respectively. Android 12 comes pre-installed on both smartphones, which brought Google’s new ‘Material You’ UI. Both phones support 30W fast wired charging, and 23W wireless charging. Stereo speakers are included, and both phones are water and dust resistant. 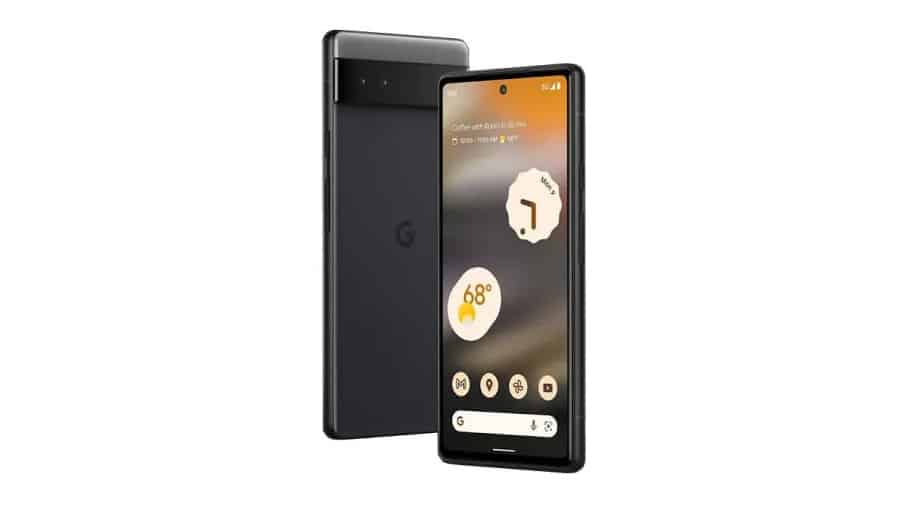 The Google Pixel 6a got announced in May 2022. It was presented during Google I/O 2022, Google’s developers conference. During the show, Google said that the phone won’t become available straight away, but instead scheduled its release for the end of July. That being said, the Pixel 6a ushered in Google’s new design language to the Pixel A series. In other words, it borrowed the Pixel 6 design.

The Pixel 6a has a frame made out of metal, and a 3D thermoformed composite back (plastic). The Google Tensor SoC fuels this smartphone, Google’s very first mobile processor, the same one that fuels the Pixel 6 and 6 Pro. Google also upped the game in the RAM and storage departments. It included LPDDR5 RAM and UFS 3.1 flash storage here, as it did in its flagships. It was using LPDDR4X RAM and UFS 2.1 flash storage before then.

A 12.2-megapixel camera is the main camera on this phone, which is a very well-known sensor for Google. The Pixel 5a 5G, the Pixel 6a’s predecessor, used it, and the same goes for a ton of other Pixel phones since 2017. The Pixel 6 and 6 Pro were the only two since 2017 that didn’t use that camera. Android 12 comes pre-installed on this smartphone, while a 4,410mAh battery sits on the inside. 18W wired charging is supported, while stereo speakers are also a part of the package. 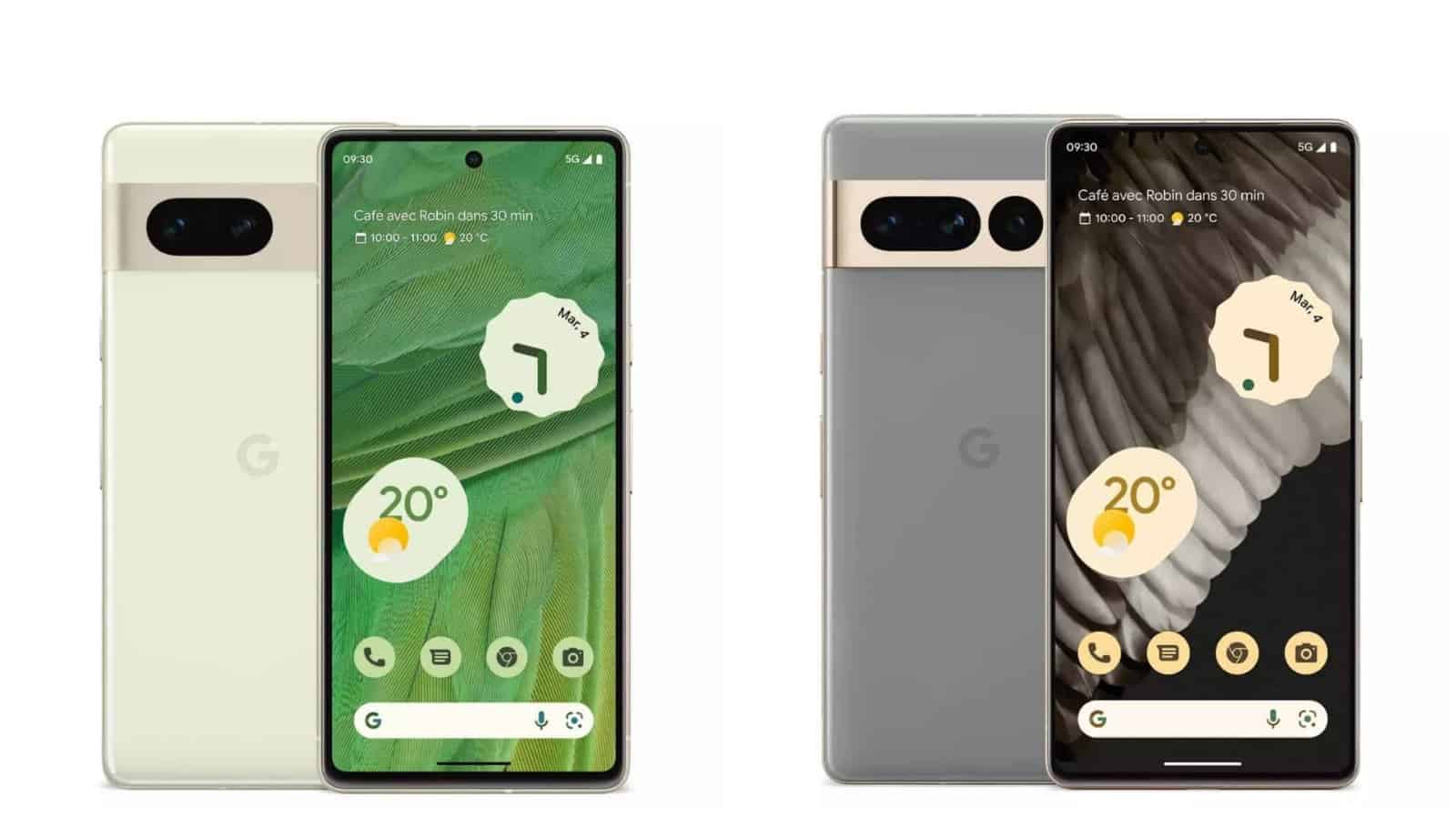 The Google Pixel 7 & Pixel 7 Pro got announced in October 2022. These two smartphones do not represent a major change in comparison to the Pixel 6 series. They actually look very similar to their predecessors, with one obvious difference. The Pixel 7 series has a piece of metal covering the rear camera visor, instead of the glass that was used in the Pixel 6 series smartphones.

The Pixel 7 is also a bit smaller than the Pixel 6. Both of these smartphones are fueled by the Tensor G2 SoC, Google’s second-gen Tensor chip. They come with a number of camera improvements, though the camera hardware remained basically the same. The Pixel 7 utilizes a 50-megapixel main camera, in addition to a 12-megapixel ultrawide unit. Both of those cameras are used by the ‘Pro’ model as well, with the addition of a 48-megapixel telephoto camera.

Both devices support wireless charging, and neither includes a charger in the box. Android 13 comes pre-installed on both smartphones. Some new camera features include Macro Focus on the ‘Pro’ model, while both devices offer the ‘Face Unblur’ feature as well. Those are only some of them. These two phones also feature the most recycled materials of any Pixel phone to date.