Buying a new computer can be a hassle, especially if you’re buying a laptop or Chromebook as a gift for somebody else. And, perhaps more pertinently for 2021, especially since an ongoing chip shortage is impacting everything from pricing to availability. With many laptops of all stripes either never materializing in large enough quantities or launching late.

Making matters more challenging still, there simply haven’t been as many new computers announced this year but there are still a plethora of options to choose from.

That’s precisely the conundrum this gift guide is intended to address, specifically as that pertains to the best Chromebooks and Windows laptops presently available. From the most budget-friendly to the expensive and from the large to small, filling in all of the categories in-between. These are not, of course, the best gaming laptops around but for those who need a reliable machine for just about any other purpose, these devices should have you covered. 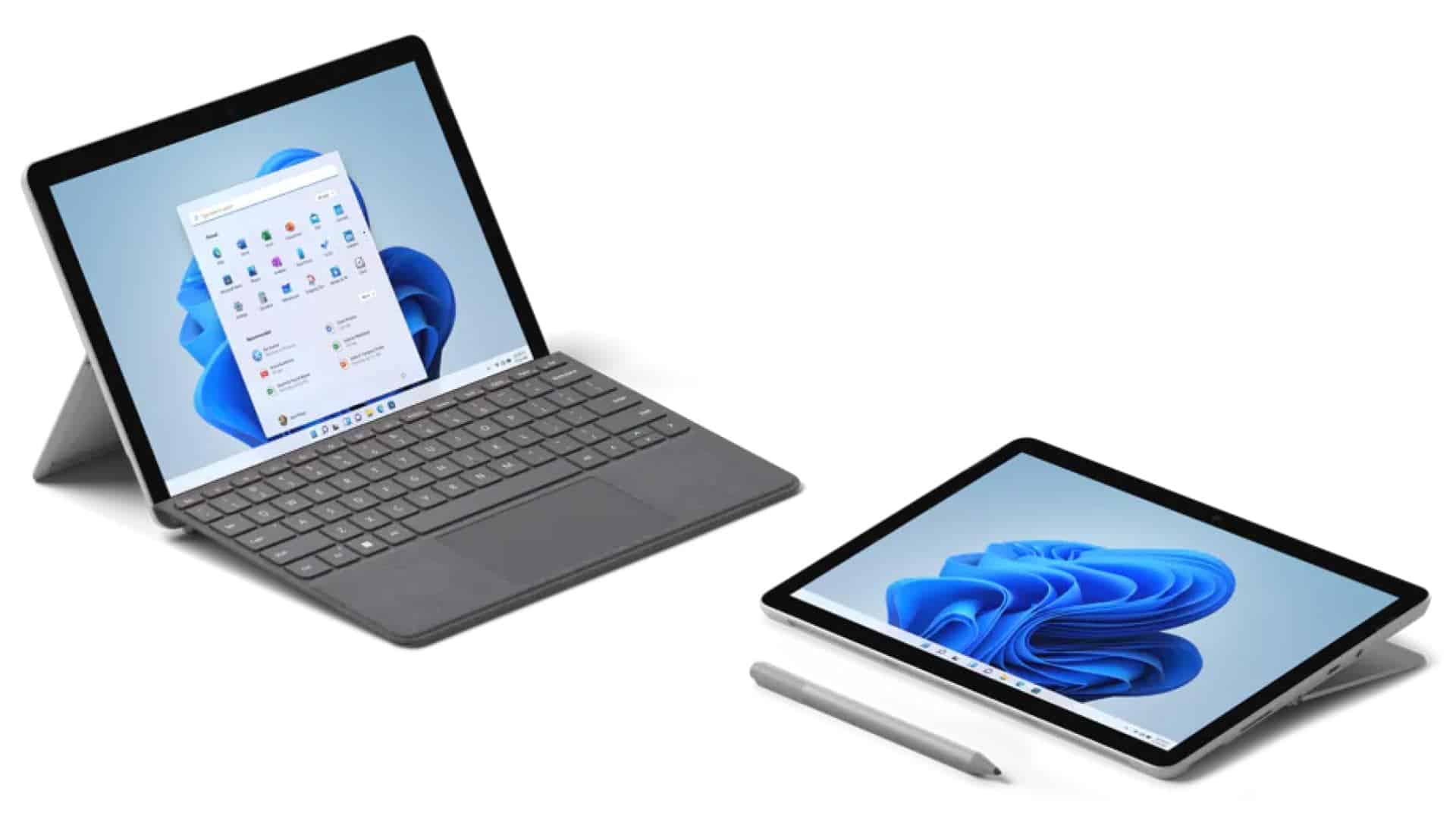 Launching just in time for the holiday season is Microsoft’s new lineup of Surface-branded devices and that includes new tablet-style detachable laptops like the Surface Go 3. Like the Microsoft Surface Go 2, this is a budget-friendly portable PC costing just under $400. But this year’s model also has some updates.

Well beyond shipping with Windows 11 out-of-the-box, buyers can pick this up with up to 8GB RAM and 128GB storage. With up to a brand new Intel Core i3 processor. The included touchscreen comes in at 10.5-inches at a resolution of 1920x  1280 pixels. And the available stylus pen, mouse, and keyboard ensure that hardware can be put to good use. Whether for entertainment or productivity. 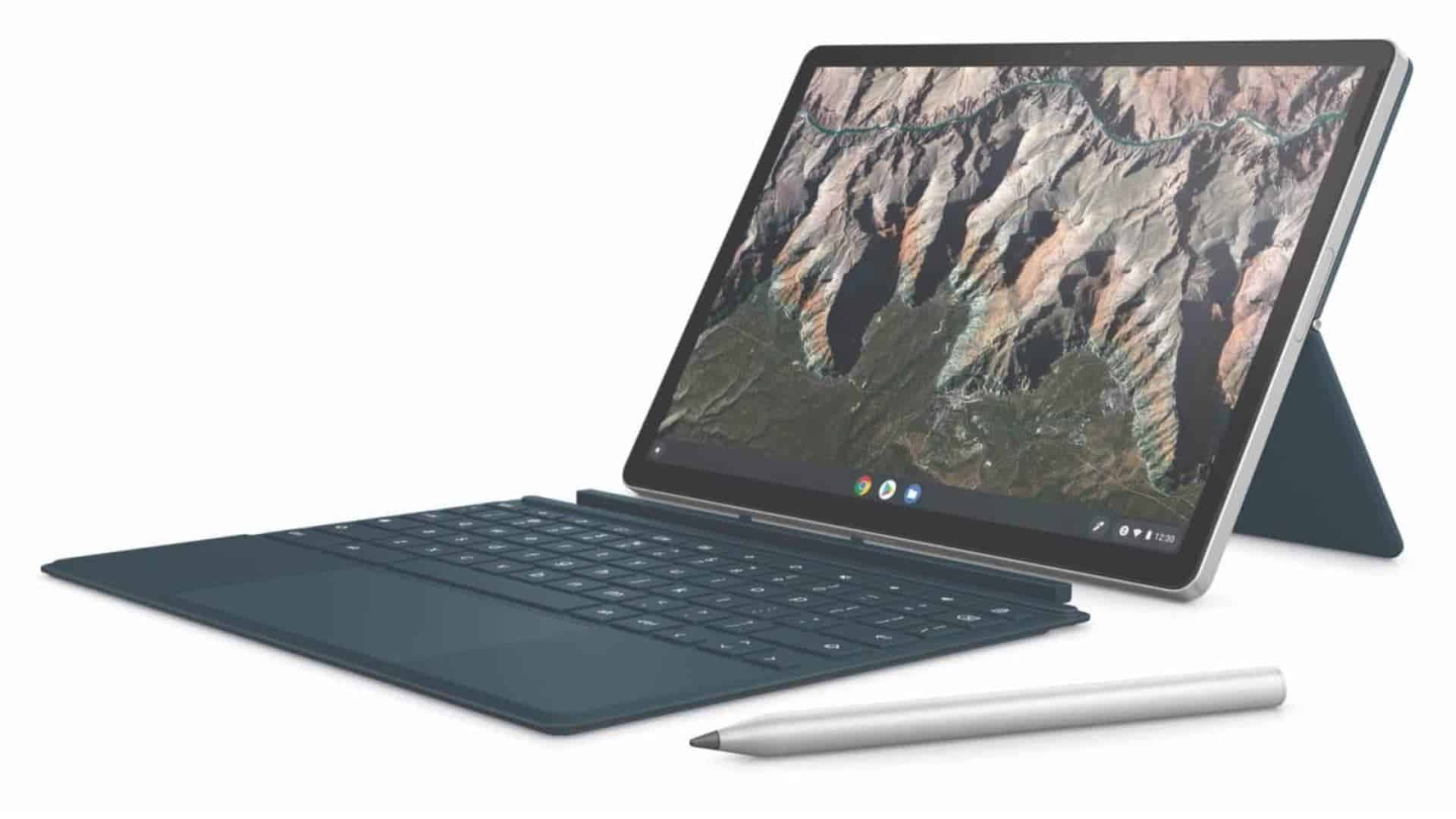 Those looking for a similar experience to the Microsoft Surface Go 3 laptops, conversely, may want to take a look at HP’s Chromebook x2 11 for the holiday season. As the branding suggests, this one brings many of the same benefits, with some of the accessories included. Although it has a slightly higher starting price of $599.99. The primary difference, of course, is Chrome OS instead of Windows.

8GB of RAM and 64GB of storage are coupled with a next-gen Qualcomm Snapdragon 7c Compute Platform chip here. Combined with Chrome OS and packed under an 11-inch touch screen with USI stylus support, that should prove more than enough. And an almost perfect pairing for the Android apps Chromebooks can run. Setting aside that the stylus itself is also included alongside the detachable keyboard.

All equating to a premium portable experience without the premium price tag. 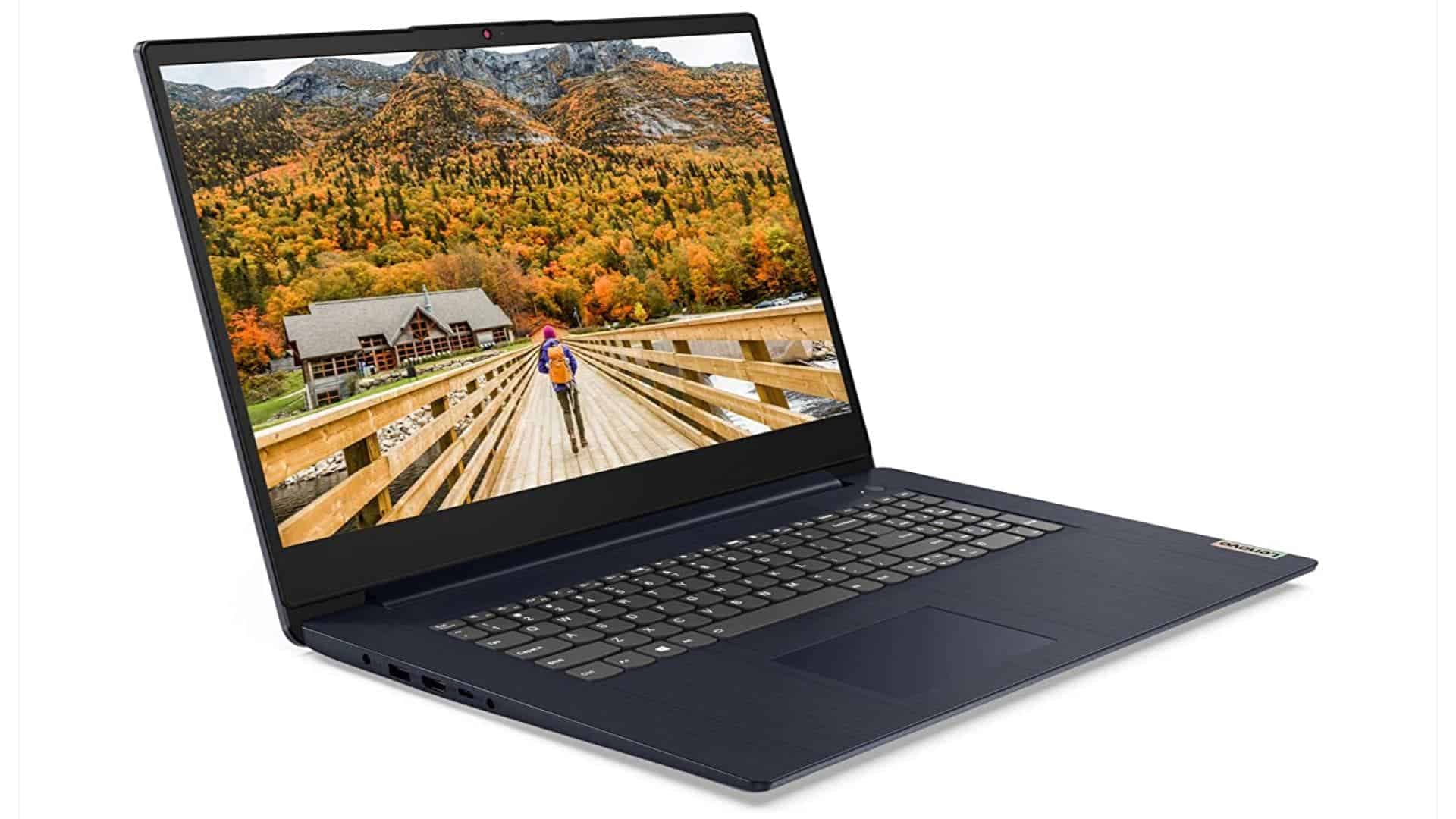 For those who need a guide for the holiday when it comes to a large-screen experience, it’s going to be hard to go wrong with any laptops or Chromebooks made by Lenovo. But perhaps nowhere more so than with the Lenovo IdeaPad 3. At 17.3-inches, in a sleek design with a resolution of 1600 x 900, this is going to be a great machine for those purposes.

Under the hood, conversely, things don’t necessarily get much higher in terms of value either. An AMD Ryzen 5 processor, paired with Radeon RX Vega 7 graphics, 8GB of DDR4 RAM, and 512GB of NVMe SSD storage top things off. Providing all of the power that might be needed for most users. And with enough to spare that an update to Windows 11 should be more than feasible.

All, of course, in a package that’s large on both the screen and value. From a company well-regarded for its high-quality laptops. 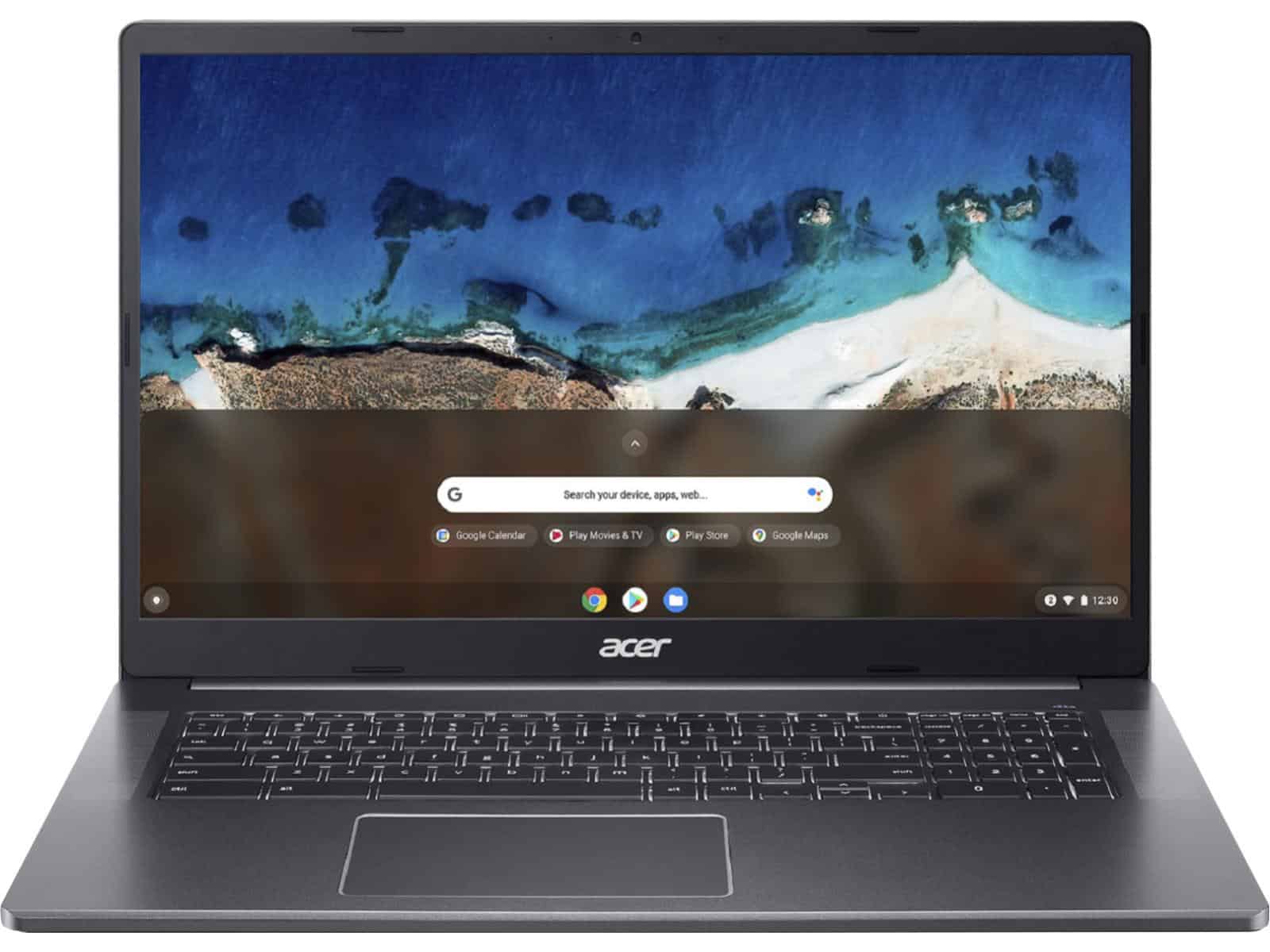 For entertainment purposes and the largest Chrome OS screen around — and the largest in this guide — holiday shoppers and gift recipients will appreciate the Acer Chromebook 317. And that’s not just because this first-gen product comes with a bright 17.3-inch FullHD display either. Or because it comes in touch and non-touch variants.

The latest connectivity whether Bluetooth or WiFi, up to 8GB RAM and 64GB of storage, and a full number pad help make this a worthwhile laptop. And, with Chrome OS coupled with that much RAM, the up-to Intel Pentium Silver processor isn’t a letdown at all.

That is, of course, setting aside the all-day battery at 10-hours per charge, Acer’s build quality, or the relatively lightweight design, in spite of its size. 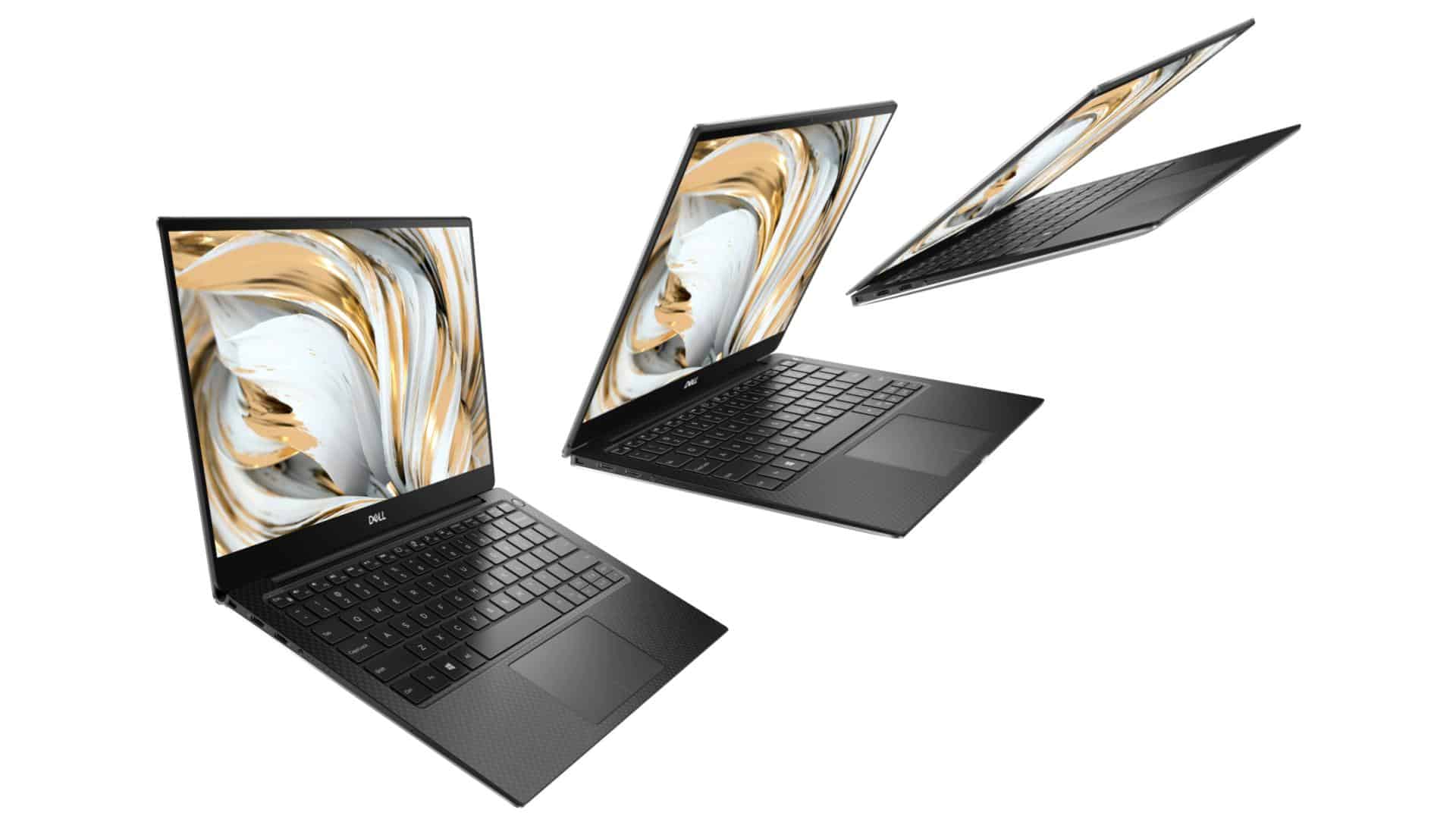 Now, Dell is widely known for building solid machines with great service. And with performance to match, those are typically ready to go for either business or home use. So, looking past its great Chromebooks, its Dell XPS 13.3 series of laptops is going to be a shoo-in on this particular holiday gift guide.

Starting out at $899.99 and running Windows 10 out-of-the-box, with updates to Windows 11 coming, the Dell XPS is a powerhouse at all levels of the mid-range. Starting with an 11th Gen Intel Core i5 processor and 8GB of RAM, these can be purchased with up to an i7 and 16GB of memory. And with up to a 1TB M.2 solid-state drive on the storage front. That’s with a 13-inch FullHD touch screen, to boot. 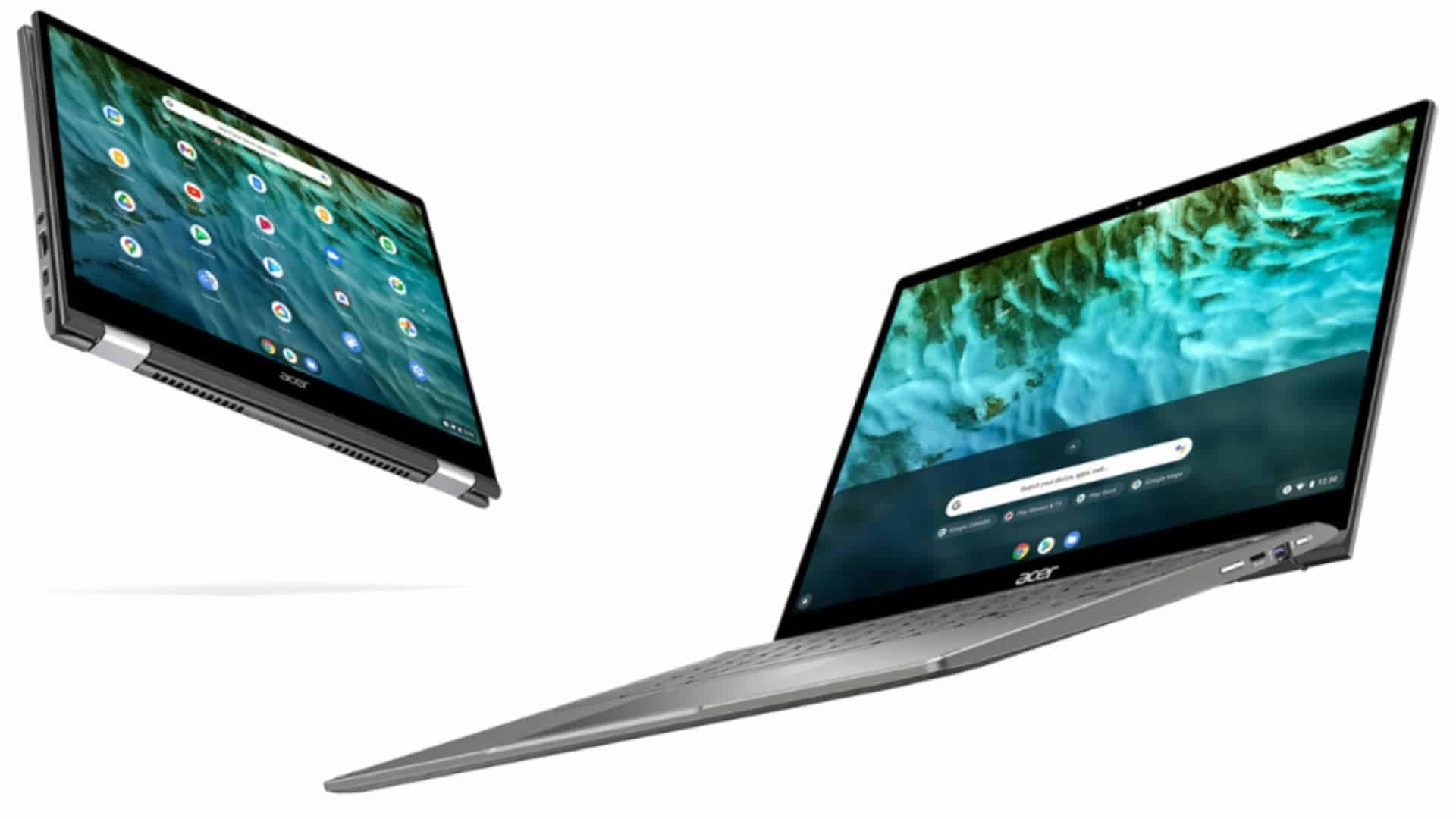 On the other side of the laptops coin, starting at $629.99 and running the same OS found on other Chromebooks, is Acer’s third-gen Chromebook Spin 713. Like the Dell machine above, this one comes with an Intel Evo Core i5 processor to start, backed by 8GB of RAM and 256GB of storage.

The biggest difference here is going to be in the display, rated at 2K resolution with USI stylus support in a 2-in-1 folding format. That’s also a slightly bigger panel at 13.5-inches. And, of course, that comes packed into a more rugged frame than most competitors, complete with a Gorilla Glass screen and touchpad covering. A backlit keyboard is included as well for those who need one. 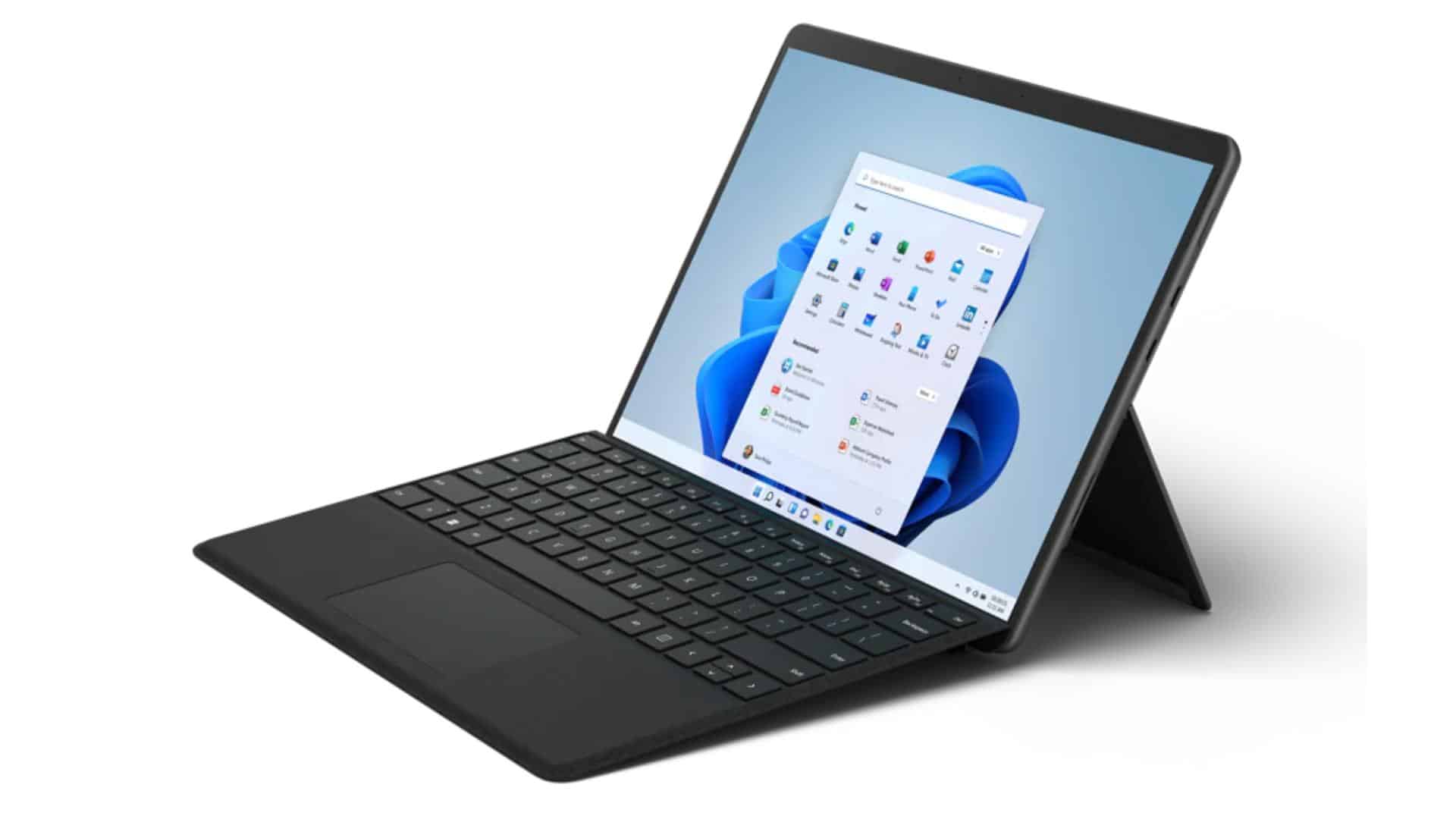 Of course, if you’re looking to gift laptops that avoid the OS on Chromebooks, and, instead, looking to run Windows 11 out of the gate, this next guide entry does just that. And it runs it well too. As it should, given its price point. At 13-inches and with configurable options starting at $1,099.99, Microsoft Surface Pro 8 is a powerful laptop that gets the work done. Regardless of what work needs to get done.

At the bass end, buyers can purchase this detachable laptop — with an optional pen and keyboard — with an Intel Evo Platinum Core i5 processor. That’s backed by 8GB RAM and 128GB of SSD storage. But that can be bumped all the way up to an i7 processor from the same series. And with as much as 32GB of memory with a 1TB storage option.

A 2K touch screen and all of the latest Windows 11 features are just icing on the cake. 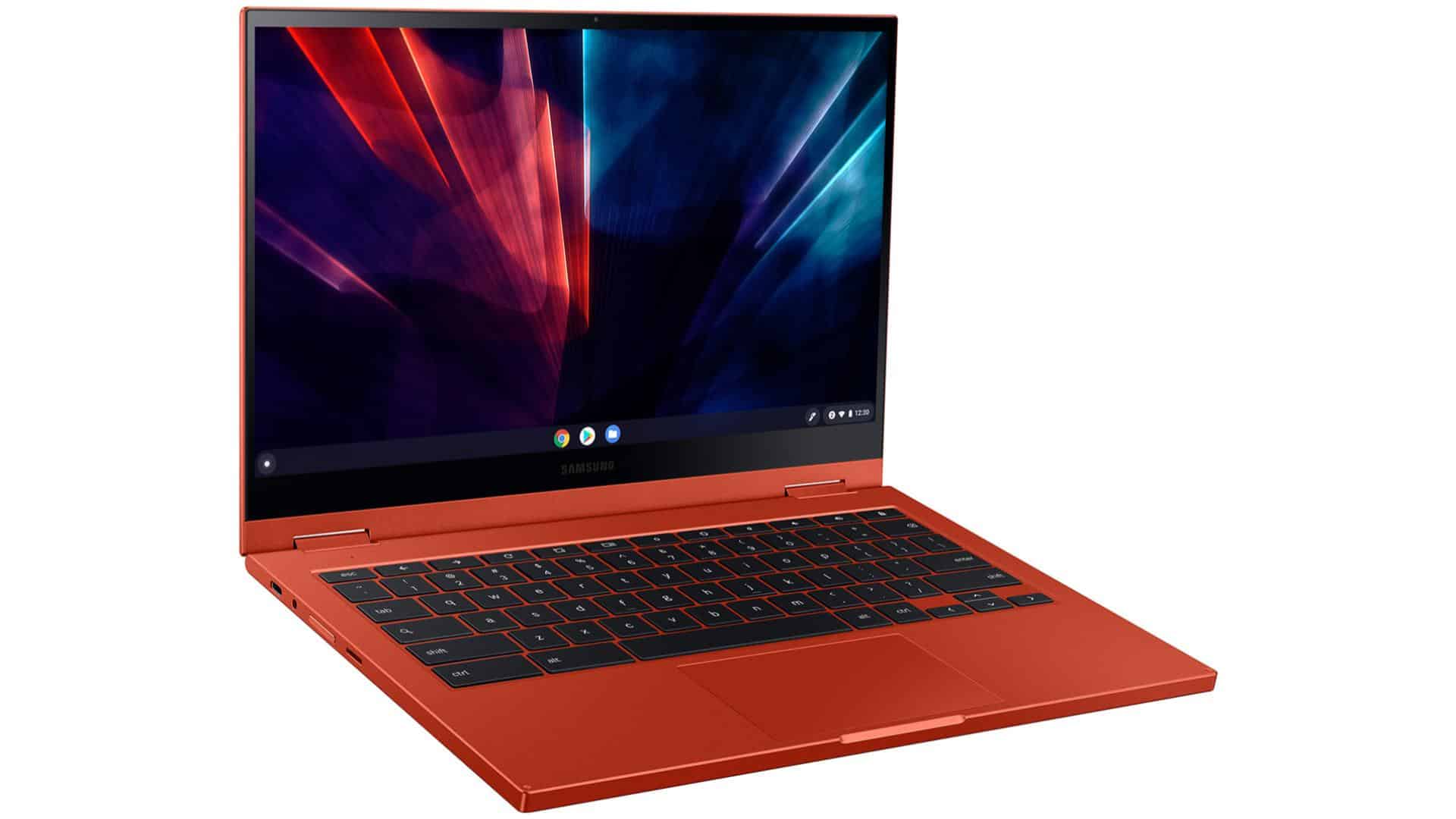 Conversely, if Google’s Chrome OS is more your flavor, the Samsung Galaxy Chromebook 2 is another option. Albeit at a cheaper price than some other entries.

For the purposes of this gift guide, the Galaxy Chromebook 2 stands out among both laptops and Chromebooks with its 13.3-inch FullHD QLED display panel. Offering arguably the best visuals on the platform despite the lower resolution.

And that’s coupled with up to a 10th Gen Intel Core i3 processor as well. Alongside 8GB RAM and up to 128GB of storage. Premium audio, stylus support, a great keyboard, and a stunning design are joined with that underpinning hardware in addition to a backlit keyboard in a 2-in-1 frame. Easily making this one of the most high-value offerings available in either Fiesta Red or Mercury Gray. Setting aside that this is easily one of the slimmest laptops on the market, despite its performance prowess. 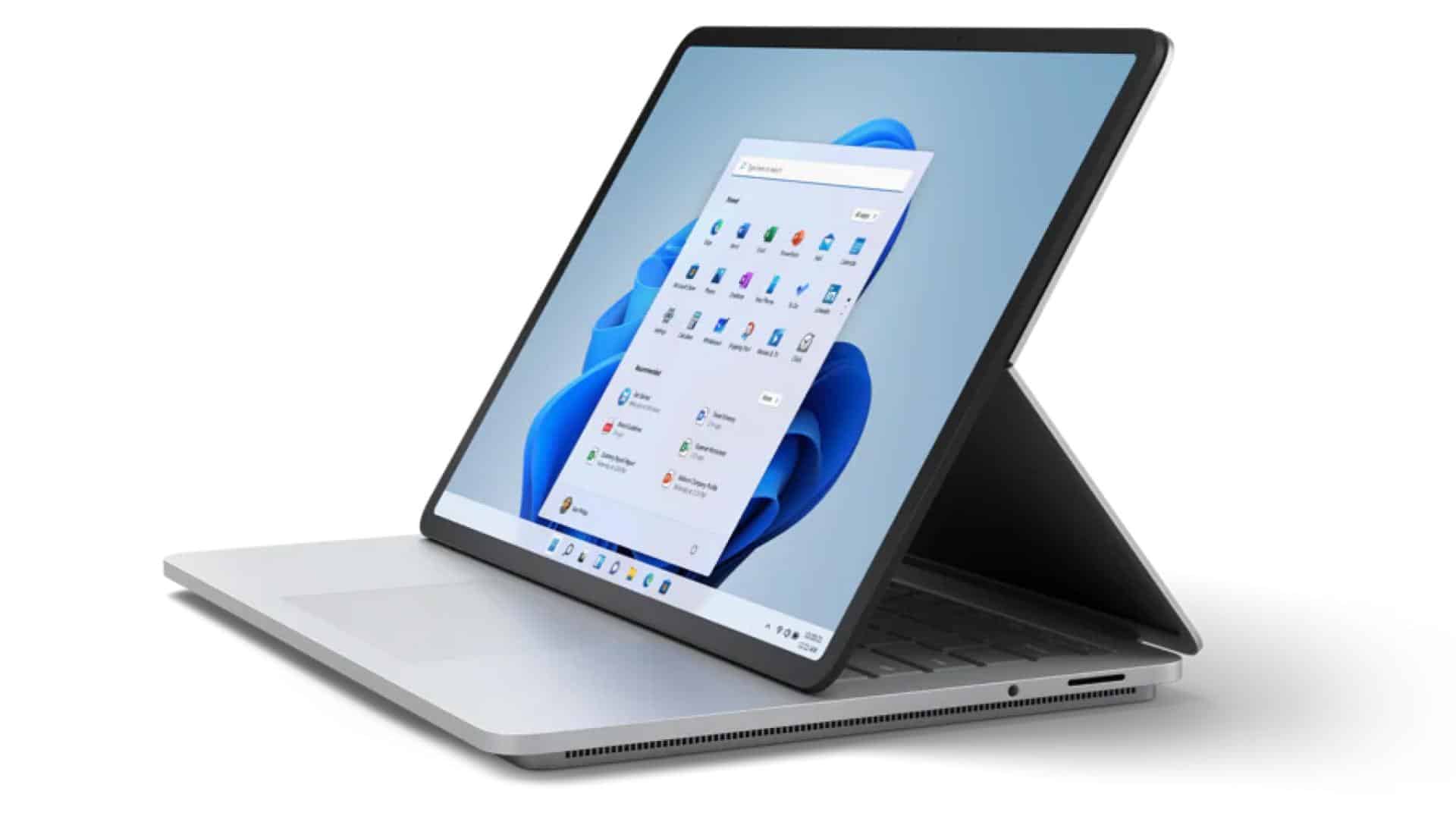 If the Microsoft Surface Pro 8 or Chromebooks just aren’t enough, Microsoft has one more set of laptops that go well beyond meeting the minimum requirements for this gift guide. Namely, the Microsoft Surface Laptop Studio. As shown in the image above, the biggest benefit to this flexible laptop is going to be its unique form factor.

The keyboard on Surface Laptop Studio doesn’t come away from the frame like the other gadgets here. But it does act as a stand for a comfortable tablet or drawing slate mode. And the 14.4-inch touchscreen is also ready to be paired with Microsoft’s new Surface Slim Pen 2. With a refresh rate of 120Hz to top things off.

On the inside, quad-core 11th Gen Intel Core H Series processors max out at an i7 with an i5 at the more affordable end of the spectrum. And Microsoft has paired that with up to 32GB of memory and up to 2TB of the fastest storage. For graphics, the new creator-ready machine comes with an NVIDIA GeForce RTX 3050 Ti laptop GPU. Just to name a few of the things you get for your money. 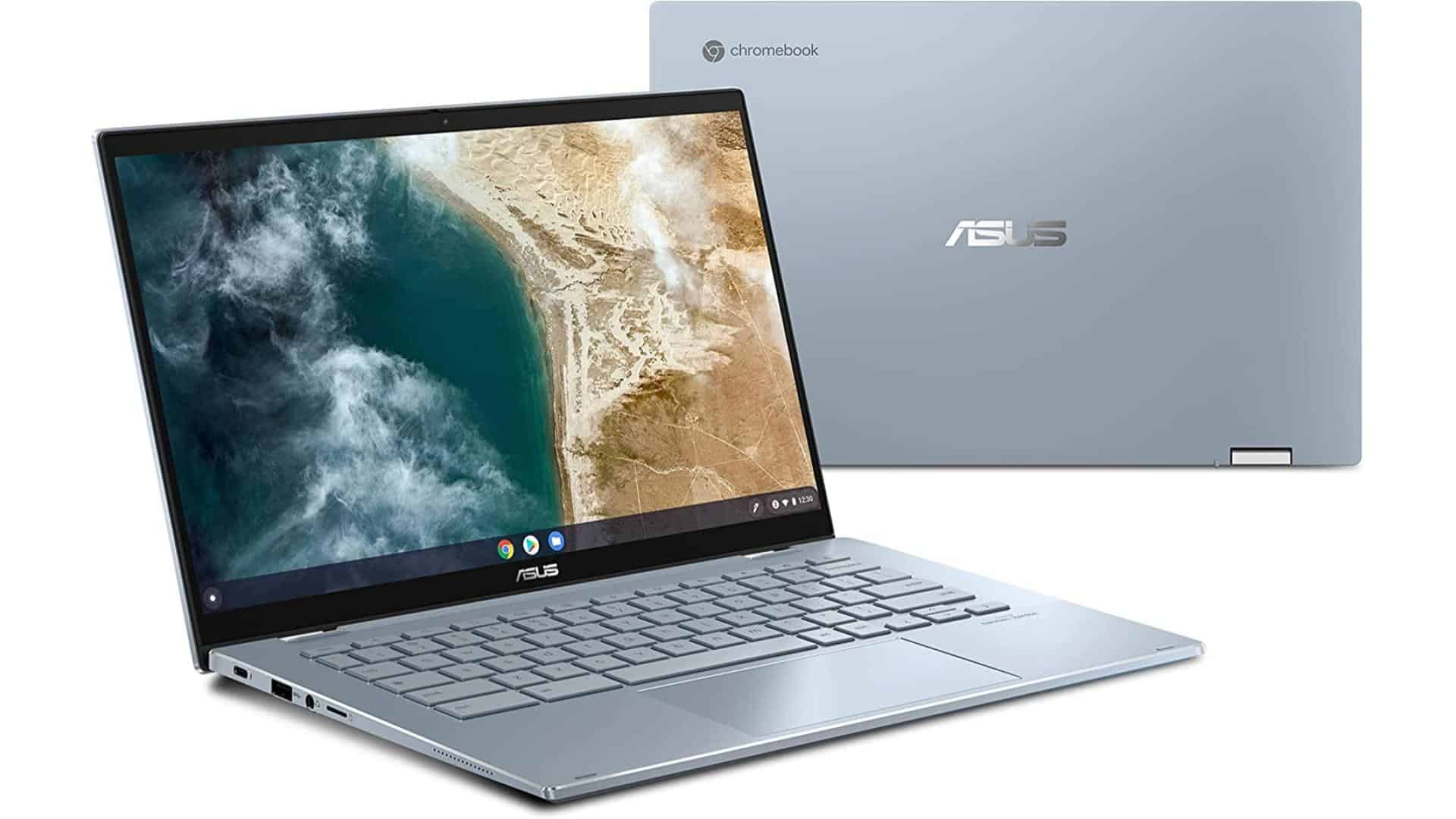 Now, the ASUS Chromebook Flip CX9 really should be mentioned in this final entry in this guide for laptops and Chromebooks for the holidays. Chiefly because of its trackpad-implanted number pad, up to i7 processors, USI stylus support, and other aspects. But that machine is a bit harder to find than the CX5. So instead we’ve opted to include the next best thing and a device that still really rivals that. The premium level ASUS Chromebook Flip CX5.

Announced at the same time as the CX9, the CX5 comes at an exceptional value with up to an Intel Core i7 processor from the 11th generation of chips. And with up to 16GB of RAM and 512GB of storage. So it should, paired with Chrome OS, have just about as much power as could be put to use for the operating system.

What’s more, this computer comes with a garaged stylus built right into the frame, a rugged aluminum design in a slim form factor, and a foldable 360-degree hinge. So it can be used as a tablet instead of a clamshell laptop if needed. Intel Iris Xe on the graphics front and its FullHD resolution, tied in with WiFi 6 and Harmon Kardon speakers, conversely, are just a few of the benefits that ship with what is arguably the best Chromebook of 2021.