FuboTV is another Live TV Streaming service that you may or may not have heard of. It’s not owned by any big companies like AT&T, Google, or Disney. But it is one you’re going to want to pay attention to. It has marketed itself as the streaming service for Sports fans. That is because FuboTV has just about every sports channel you can think of, and many you didn’t know existed.

It’s another reason to ditch your cable or satellite provider, and it might actually be the best option out there, depending on your needs.

In this article, we’re going to answer a bunch of questions about FuboTV. Including whether or not it is worth it.

As mentioned already, FuboTV is a Live TV Streaming service that is aimed mostly at sports fans. Currently, FuboTV has the most comprehensive sports offering, after it signed a deal with Disney in the summer of 2020. Which brought over ESPN, Disney and ABC to its lineup.

Unlike YouTube TV, FuboTV does offer a few different packages. Some of which bundle a few add-ons together, at a lower price. Plans start at $65, and you can go up to over $100 per month with FuboTV with the different add ons available. It can get expensive, but you’ll have plenty of content to watch too.

FuboTV has been competing pretty well with the likes of YouTube TV, Hulu + Live TV and even AT&T TV NOW. All of which are priced around the same. But FuboTV has by far the most channels.

How much does FuboTV cost?

The base price for FuboTV is about $69.99 per month. That gets you Fubo Pro, with over 100 channels of content. And depending on how many locals are available in your area, it could be closer to 150. This plan also gives you 1,000 hours of DVR recording space. And you can watch FuboTV on up to ten devices simultaneously.

Then there is Fubo Elite, which will cost you $80 per month. This package includes Fubo Extra and News Plus. It also includes 4K sports and over 171 channels. The Pro plan no longer has 4K content for new subscribers (as of May 2, 2022), so you’ll need Elite to get 4K. It also has 1,000 hours of DVR and unlimited screens. 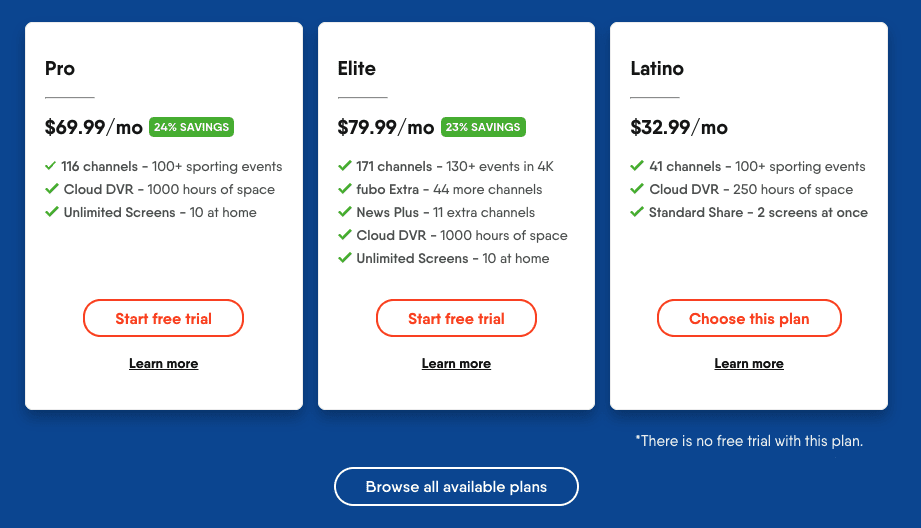 There is Fubo Starter is no longer available. fuboTV ditched that plan earlier this year, to focus on Pro and Elite plans.

Yes, FuboTV does offer a free trial of its service. You can sign up and get a free 7-day free trial here.

That’s long enough to really check out the service and see if it is worth switching too. If you decide not to switch over to FuboTV, make sure you cancel before those seven days are up. Otherwise you will be charged for your first month of service.

In the free trial, you can also take advantage of adding many add-ons and even using the more expensive Fubo Elite plan. And see if it is really worth it for you.

If for some reason there wasn’t already enough sports channels available, you can add Sports Plus for $11 per month. This will get you 28 dedicated sports channels including NFL RedZone.

You also have the ability to add Showtime for $11 per month. That gives you nine Showtime channels, in addition to its entire on-demand catalog.

What devices and platforms does it support?

It also works on Android and iOS, allowing you to watch FuboTV when you’re not home, or don’t have a TV available. And it does also work on Xbox One. Unfortunately, no support has been added for the new consoles just yet. And it’s unclear if either the Xbox Series X|S or the PlayStation 5 will get FuboTV just yet.

Finally, FuboTV does also work in the browser, but it does recommend Chrome over other browsers. It does support Safari, Edge, Firefox and Chrome however.

What features does FuboTV have?

FuboTV doesn’t have as many features as some of its competitors. Instead, FuboTV relies on its channel lineup to bring in customers and make the pricing worth it for customers. Having said that, there are a few pretty sweet features available on FuboTV.

FuboTV does not offer unlimited cloud DVR. That’s one feature we would love to see other companies add and “steal” away from YouTube TV. Which is currently one of only two Live TV Streaming services that offers an unlimited cloud DVR feature. With the other being Philo TV.

Cloud DVR is a must-have feature for any Live TV service. This is because you are not always home when your shows air on TV. So you’re going to want to record them and watch later on. In fact, I almost never watch anything live – other than sports. Everything I watch was recorded and on my DVR.

FuboTV does include Cloud DVR for free, but it’s limited. In the Fubo Standard plan, you get only 30 hours of recording space. To get more, you can either add it as an add-on, or upgrade your plan to Fubo Family or Elite. We’d recommend upgrading to Fubo Family. As you get 250 hours, which normally costs $10/month, for only $5 (plus a few other freebies).

As of April 2021, you can now automatically record every game for specific teams. This feature is currently rolling out to all FuboTV subscribers. And is very similar to the feature that allows you to record all episodes of a particular TV show.

FuboTV does also offer instant DVR, so you can watch your recording as soon as it starts recording. But this is only available on iOS, Apple TV and Roku devices. Every other platform, you’ll need to wait about an hour after the recording has finished to watch it.

Finally, FuboTV does have another Cloud DVR feature that is currently in beta. Which is Startover. So if you got home after the game started, you can startover and watch from the beginning. It’s in beta and available on iOS, Android, Apple TV and Roku as well as the FuboTV website. Of course, more devices will gain support in the future.

On the Fubo Standard plan, you get two streams at once. While the Fubo Family plan ups that to three streams and maxes out at five streams on the Fubo Elite plan. That makes the family or Elite plans better if you are sharing FuboTV with multiple people in your home (or outside your home).

These multiple streams are pretty comparative with competitors. YouTube TV offers three streams, as does Hulu + Live TV. Five streams is actually quite impressive, and that is not something we see on a lot of other services, surprisingly. That makes FuboTV great to share with people that don’t live in your home too.

FuboTV is actually one of the few streaming services out there that has support for 4K support and live streaming in 4K. It was also the first to do this with non-sports content. As BBC America’s Seven Worlds, One Planet was streamed in 4K in early 2020.

Of course, getting channels to switch over to 4K is a big ask. As it is somewhat easy to stream in 4K, but getting that over the airwaves that OTA antennas and cable companies use, is a lot more difficult. But it is good to see that it is starting.

There is also support for HDR10 on some channels and with some on-demand content. But neither 4K or HDR is widely available on FuboTV across everything that is available on the platform.

What channels are available?

As of December 2020, these are the channels available on FuboTV Standard and Family:

These do not include any local channels that might be available in your area. Most areas will also have NBC, CBS, FOX, ABC, CW and PBS. As well as a few others, depending on the area.

Fubo Extra is one of the most popular add-ons, and is also included in Fubo Elite. With this add on, you’ll be paying $8 per month for an additional 46 channels. Here’s the complete list:

Channels included in Sports Plus with NFL Redzone

If you want to add more sports to your FuboTV experience, you can add the Sports Plus with NFL Redzone for $10.99 per month. Which includes the following 26 channels.

You can check out the full line ups for other add-on packages by clicking here.

Is FuboTV worth it?

If you’re a sports fan, then FuboTV is by far the only choice available for you. The sheer number of sports channels available on FuboTV is unmatched. With really the only channels missing being the regional Fox Sports channels. Which were removed from just about every streaming service this year. After Sinclair bought those channels from Disney, and decided to play hard to get with streaming services to carry these channels. So you won’t find these Fox Sports channels anywhere that does streaming Live TV, unfortunately.

FuboTV is not the most expensive streaming TV service out there, but it is far from the cheapest. When we look at live TV services, we try not to look at the number of channels available. Because even though there are 219 FuboTV channels available in my area, probably 200 of those I will never watch. So make sure to keep that in mind when you’re deciding on whether you want to switch to FuboTV.

From a value perspective though, FuboTV is unmatched. Its price is getting close to cable, but it has far less restrictions than cable. For example, you can watch on a TV at your friends house. Something you can’t do with Verizon or Comcast.

FuboTV does offer up a 7-day free trial, which you can sign up for here. And see if it’s worth switching too. If you decide not to switch, make sure to cancel before those seven days are up. Otherwise, you will be billed for your first month of service after those seven days.