Skip to content
Advertisement
Trusted By Millions
Independent, Expert Android News You Can Trust, Since 2010
Publishing More Android Than Anyone Else
37
Today
240
This Week
751
This Month
3757
This Year
121369
All Time
Advertisement Recently, you’ve probably heard a lot about Xfinity Mobile. It’s Comcast’s own wireless service, and another part of its bundles. It’s another MVNO, so it doesn’t actually run on Comcast’s own network, but Verizon’s instead. But it also uses the millions of Comcast WiFi Hotspots around the country too. It works a lot like Google Fi, but instead of working on multiple wireless networks, it works on just one.

What is Xfinity Mobile?

Xfinity Mobile is exactly what it sounds like. Comcast’s own mobile service. It is an MVNO (Mobile Virtual Network Operator) that runs on Verizon’s network. Xfinity Mobile was born out of a contract that Comcast had with Verizon where it leased most of its spectrum to Verizon, and in turn it was able to use Verizon’s network for this service.

Basically, Xfinity Mobile will work on your WiFi network when you’re at home. When you’re out of the house, it’ll either use the millions of Xfinity Mobile Hotspots around the country, or connect to Verizon’s network. Since Verizon arguably, has the best service in the country, and the best coverage, that’s a good choice by Comcast. The Hotspots are available from every person that has Comcast in their home. Their router/gateway has a public network that anyone can connect too. Which has caused a lot of people to get upset that random people can use their network and get free WiFi.

Keep in mind that because it is an MVNO, it may not get the best coverage or speeds from Verizon. As carriers do like to prioritize their postpaid customers, followed by their prepaid customers, and then MVNO customers after that. So if you live in an area that is very popular, you may end up getting deprioritized by Verizon and end up with slower speeds.

This means that you can get service for your phone for as little as $15/month. That’s not bad at all.

Keep in mind that these monthly prices do not include taxes and fees. However, since this is an MVNO, the taxes and fees will be pretty low. These are going to depend on your city and state, but you’ll likely be paying around $10 per month in taxes and fees. These are all dependent on your local government and not Comcast. So no matter who you choose to use for your phone service, you will get charged these fees. 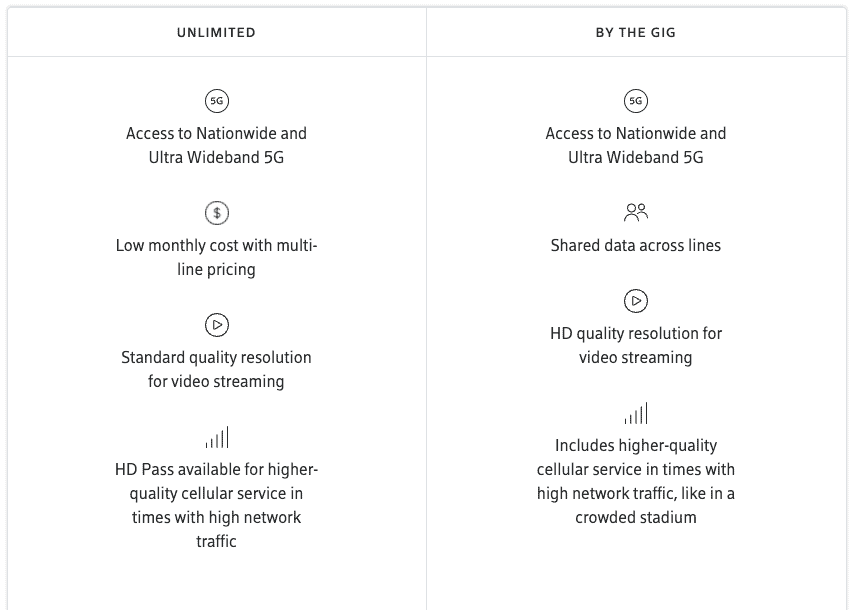 What plans are available?

As mentioned, there are essentially just two plans available for Xfinity Mobile. There’s “By the Gig” which offers 1GB, 3GB and 10GB plans. Then there is Unlimited, which of course, offers unlimited data for $45 per month.

The By the Gig plans offer unlimited messaging and calls, with 1GB of data for $15/month, 3GB for $30/month or 10GB for $60/month. While Unlimited is unlimited everything for $45 per month. Obviously, if you are using more than 3GB of data, then it is worth it to get the unlimited plan, as it is about $15 cheaper than the 10GB plan. Once you hit your data cap, you won’t see slower speeds. You can still use your phone like normal, but you will be charged $15 per gigabyte after that. So 4GB would be $45, the same as an unlimited plan.

One of the advantages to having the By The Gig plan, however, is that you can watch video streaming at HD quality, rather than “standard” quality. This is something T-Mobile started a few years ago. Basically, Standard quality is about 480p (that’s DVD quality), while HD quality is 720p. You can get HD quality on Unlimited, but it’ll cost you another $20 to get that HD Pass.

When are speeds reduced?

These days, “unlimited” doesn’t really mean unlimited. So when does Xfinity Mobile start to reduce speeds? According to its website, the speeds will be reduced around 20GB. Your data may be temporarily slower after 20GB, but this really depends on congestion in your area. A lot of the time when customers hit that 20GB threshold, data is not really slowed down. But that doesn’t mean you can go out of your way and use as much data as possible.

Do I need to be a Comcast customer?

That’s not a huge surprise, since it does use Comcast’s own Internet to help offset data prices. Hopefully this does open up to more customers in the future however.

But, keep in mind that Comcast covers the majority of the US with Internet. So it is pretty likely that you do have Comcast for Internet already. 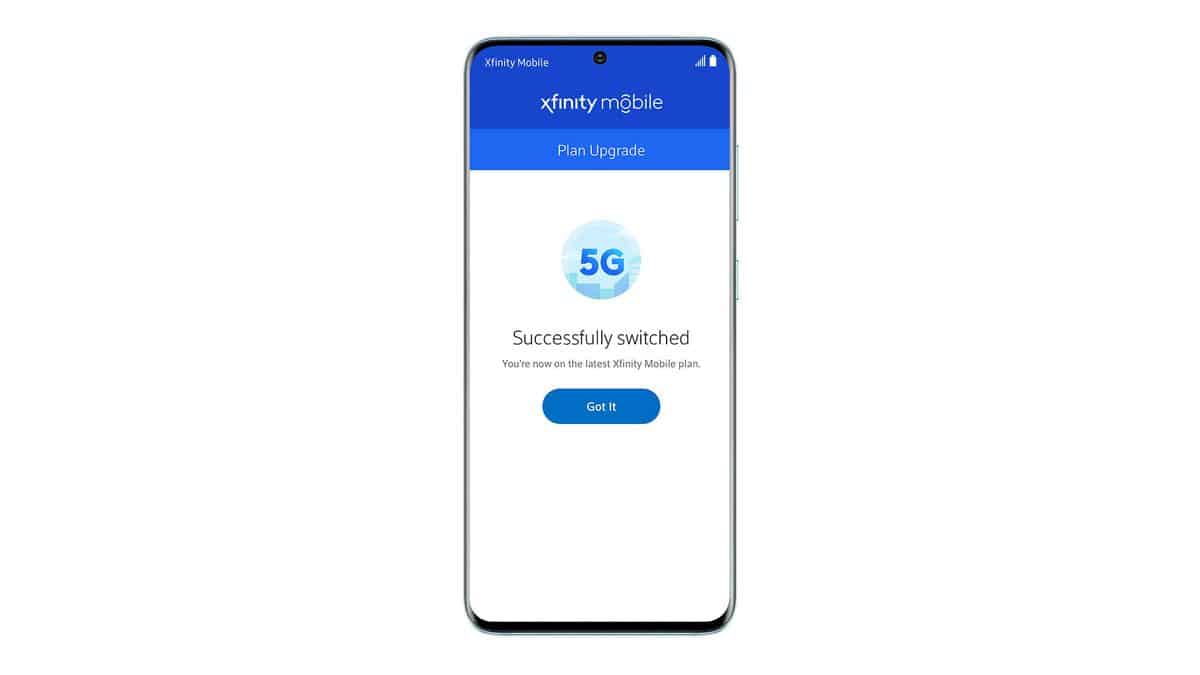 Is there 5G available?

Yes. 5G is available thanks to Verizon. So you’ll be able to get Ultra Wideband 5G from Verizon, if you have a compatible device. That includes some pretty incredible speeds, we’ve clocked over 2Gbps on Verizon’s mmWave network. But again, Xfinity Mobile will be lower on the tower than Verizon postpaid customers, so you may not see 2Gbps, but really anything over 500Mbps is already incredible for a mobile device.

No. Xfinity Mobile is an MVNO, so there’s no contracts involved. You can join and leave at any time.

Now, if you did finance your phone through Xfinity Mobile, you will owe the remaining balance when you leave. And if you got your phone at a discount, you will also forfeit those remaining bill credits. For instance, currently, the Moto G Play is available for $0/month, and is regularly priced at $149.99. So you’d be getting a $6.24 bill credit each month. But if you leave Comcast after a year, you’ll forfeit around $75 in bill credits. Obviously, it’s not that big of a deal with the Moto G Play, but others like the iPhone 13 Pro Max, which is $300 off right now, is a much bigger deal.

What devices does Xfinity Mobile support?

Xfinity Mobile allows you to bring your own phone, or you can purchase one from them. Basically any unlocked Verizon phone will work on Xfinity Mobile. Since it first launched in 2017, Xfinity Mobile has greatly increased the devices available on its network, and it is very similar to Verizon, AT&T or T-Mobile actually. 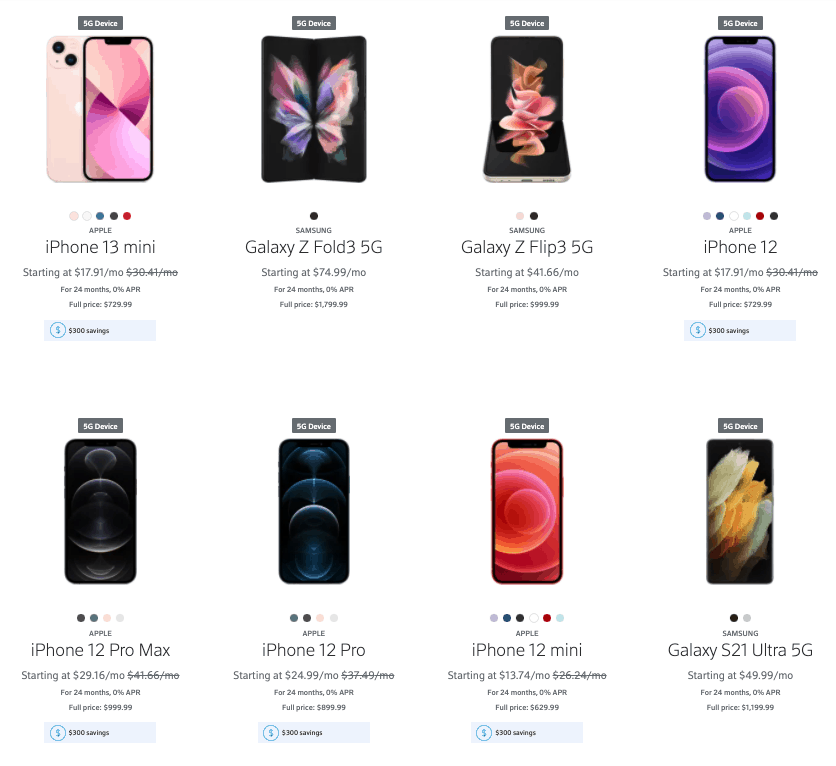 Xfinity Mobile has more than just the flagships too. So if you were looking for something a bit cheaper, Xfinity Mobile has you covered too. With the Motorola One 5G Ace, the Samsung Galaxy A32 5G, Galaxy A12 and many more. It has phones ranging from $149 all the way up to $1099.

The one caveat is that you may not have as many options for colors and storage capacities from Xfinity Mobile. It basically only has multiple colors on the recent flagships – iPhone 13, Galaxy S21 and Galaxy Z Flip 3. The rest of them are just one color.

You can sign up for Xfinity Mobile by clicking here. You’ll need to login to your Comcast account first. Then it’ll walk you through the sign up process. This will include choosing your plan, as well as your phone – whether you’re bringing your own or buying one, and setting up autopay. Like a lot of MVNOs, Xfinity Mobile only uses autopay.

Is Xfinity Mobile worth it?

Now that a lot of us are working from home, potentially forever now that we know it works, Xfinity Mobile is going to work for a lot more people. It’s a really great option for those that are working from home, or are in the office all day with WiFi. As you won’t be using much data. And if you use very little data, getting a phone plan for $15 per month is not too shabby.

Of course, this really only applies to those that have Xfinity Internet. If you don’t have Comcast for your Internet provider, then Xfinity Mobile is not even an option for you, unfortunately.