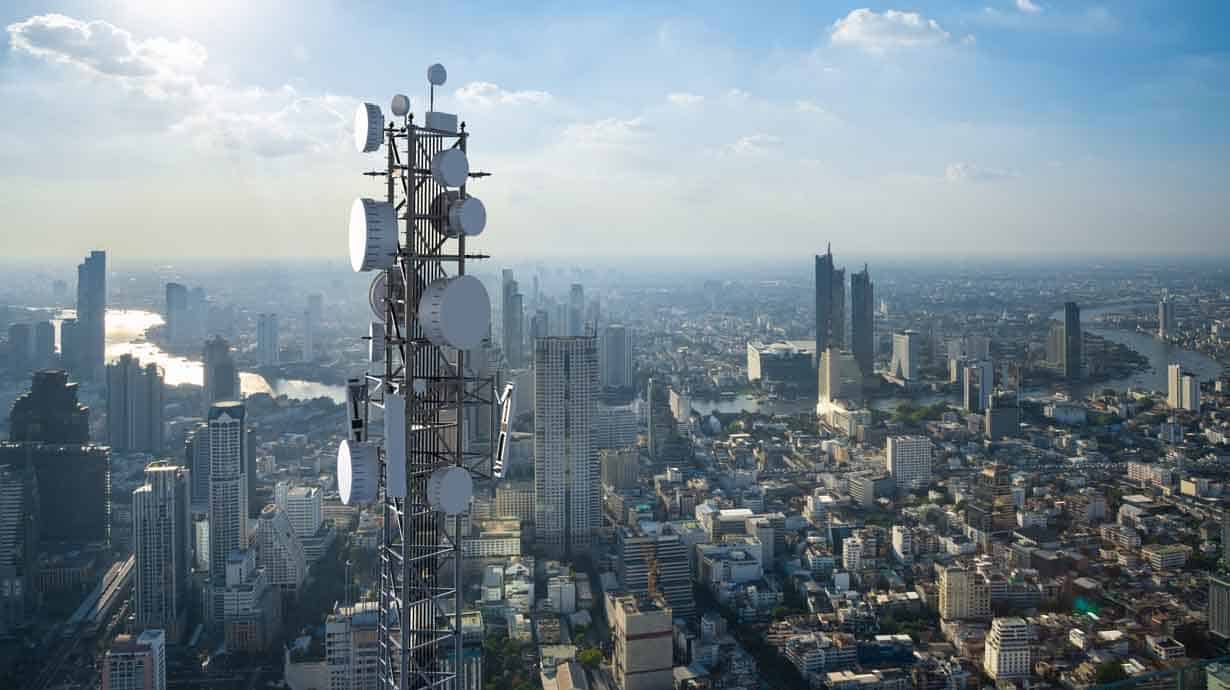 Earlier this month, Verizon announced that it was rolling out C-Band to nearly half of the US. AT&T is also starting to roll out its C-Band network. But what exactly is C-Band? That’s what we are here to talk about today. To help you learn more about C-Band, how it works with existing 5G networks, and whether you need it in your next smartphone or not.

It’s important to explain what exactly C-Band actually is. Essentially, C-Band is a set of radio airwaves that operate at a frequency between 3.7 and 3.98GHz. That is also called “mid-band spectrum”.

For Verizon and AT&T, they have been building their 5G network off of its low-band and mmWave spectrum that it already had. That’s the low-end and the high-end of a 5G network, and C-Band will serve in the middle. Remember when it comes to spectrum, the lower the spectrum the larger coverage area it can achieve and the less bandwidth it has. And the higher the spectrum, the more bandwidth you’ll get but coverage really suffers.

This is why mmWave coverage is so pitiful, but you can still get multi-gigabit speeds from it.

The plan for the carriers is to use low-band, C-band and mmWave to build out their 5G network. That’s going to provide excellent coverage while also providing blazing fast speeds.

C-Band will allow carriers to offer much faster speeds, without hurting the coverage of their network. So it’s going to work out quite well.

How fast can C-Band be?

Peak speeds are normally not worth talking about, but we’ll do it here. Verizon claims that peak speeds with C-Band will be around 1Gbps. Which doesn’t sound all that great, when mmWave can achieve up to 5Gbps already on Verizon. However, that C-band theoretical speed is 10x faster than 4G LTE is currently. 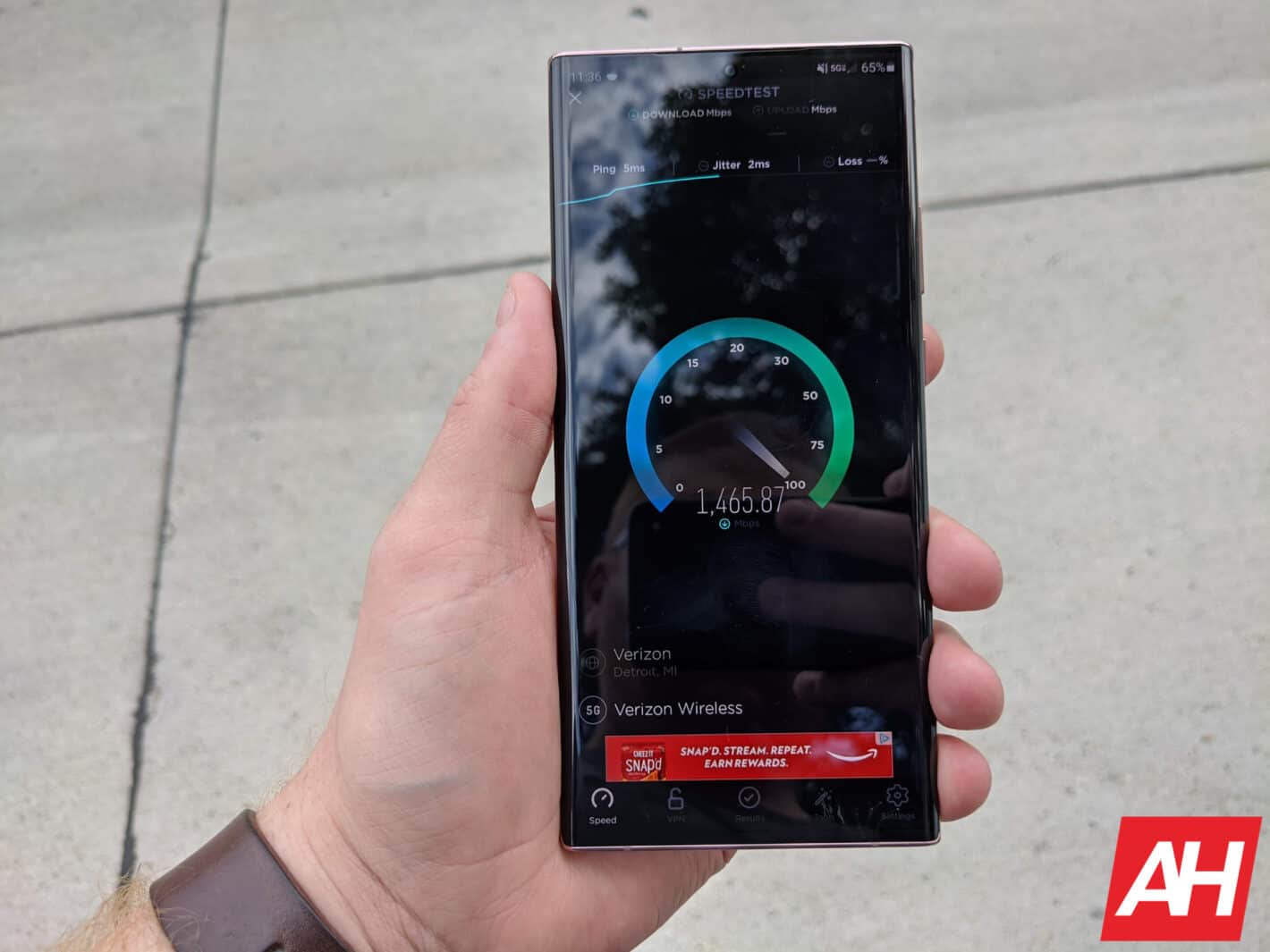 The main difference here is that, while mmWave can really only be used outdoors, C-Band will be available inside. Allowing Verizon and other carriers to use it for Home Internet – which is their plan anyways.

Verizon and AT&T are going to use the C-Band spectrum to plug coverage gaps in their 5G networks that fall between mmWave and low-bands. So that they can better blanket the entire country with 5G coverage. Between Verizon, AT&T and T-Mobile, the carriers spent over $80 billion buying up this C-Band spectrum from the FCC last year. Now it’s starting to become clear why the carriers spent that much.

How does C-Band work with the existing 5G networks?

As we’ve already mentioned, C-Band is basically the middle-layer of the 5G cake. To T-Mobile’s credit, they did a really good job explaining this to those that aren’t super knowledgeable about how wireless carrier networks work. You can see a picture of the 5G Layer Cake below. 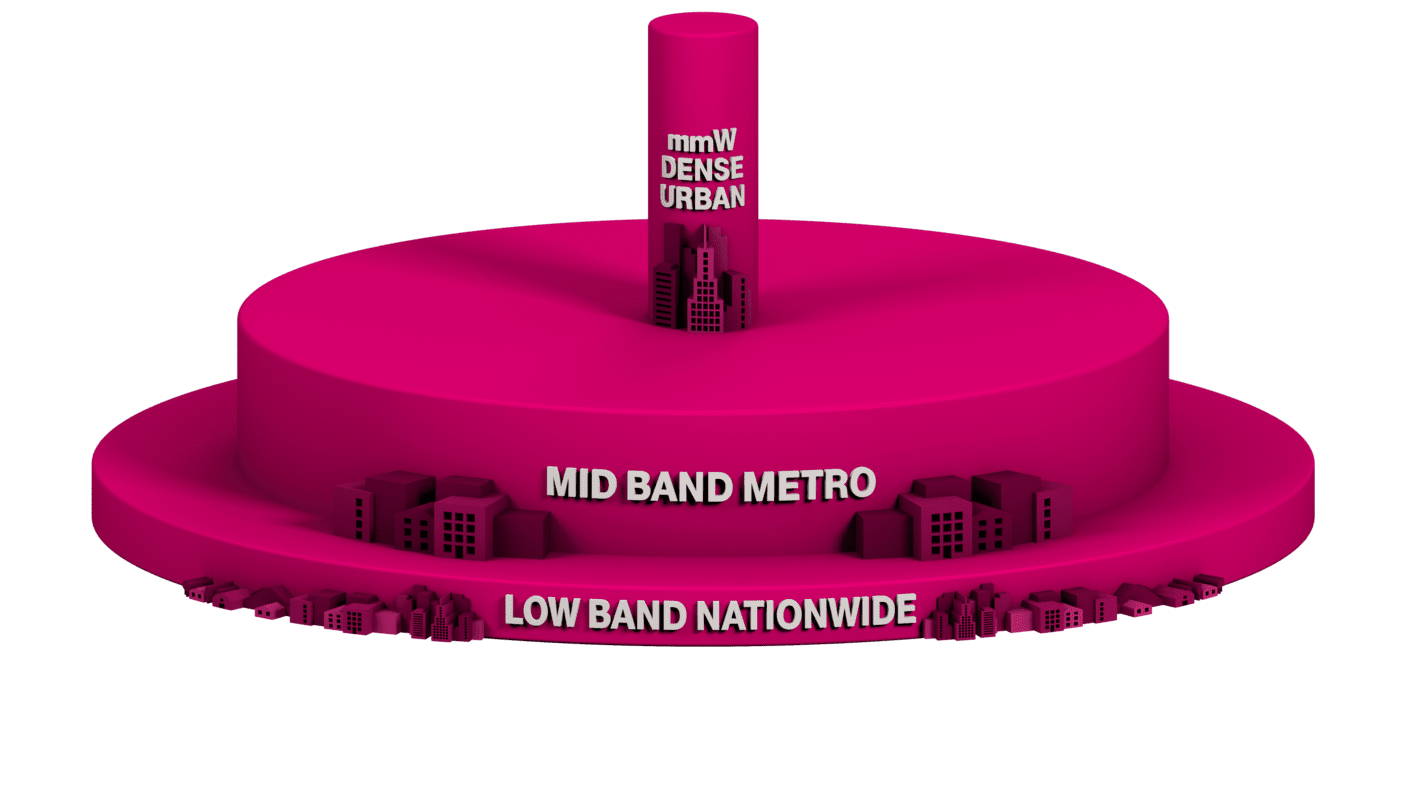 Basically, you have the low-band spectrum that is rolled out nationwide, typically using 600MHz, 700MHz or 800MHz depending on the carrier. Then there’s the mid-band layer which is going to be C-Band along with the 2.5GHz spectrum T-Mobile got when it acquired Sprint. At the top, you’ll see mmWave, which will be used in dense urban areas. Think of airports, stadiums, downtowns, malls, etc.

C-Band or mid-band spectrum, will slot in between the low-band and the mmWave spectrum that carriers have already rolled out. It’ll be available in more areas than mmWave, but perhaps not as much as low-band is. It’s also going to help carriers bring in more bandwidth, which is going to be important as we get more and more 5G devices on these carrier networks. Not just smartphones, tablets and smartwatches, but also laptops, autonomous cars, and more.

What smartphones have C-Band support?

For the past year, most smartphones sold by AT&T, T-Mobile or Verizon have had C-Band support. However, it’ll need to be turned on for it to actually work. So expect a software update once the spectrum is rolled out and turned on – for Verizon, that should be later this month.

If you bought an unlocked smartphone, you may have C-Band support, or you may not. It’ll depend on the phone manufacturer, but if you bought it from a carrier, it will definitely have it.

Here are the phones with C-Band support available (software update is needed though):

Verizon has also said that the iPad Pro and iPad Mini do work with C-Band. There’s not a lot of phones that support C-Band as of right now, but in 2022 every phone that Verizon and AT&T sell will have C-Band spectrum support. And will likely not need a software update, as C-Band will already be rolled out.

Will I need to change my plan?

This will depend on your carrier, but you may need to change your plan, or the carrier may roll out new plans. For example, Verizon did roll out some new plans that now support access to its C-Band spectrum.

Verizon did roll out some new plans that now work with its C-Band network. Prices did not change, and Verizon actually added some more data to them all. Including a plan that now has no deprioritization. Meaning you can use as much data as you want, and never be slowed down. This is a really good plan to check out, especially with the speeds we’re talking about for 5G. 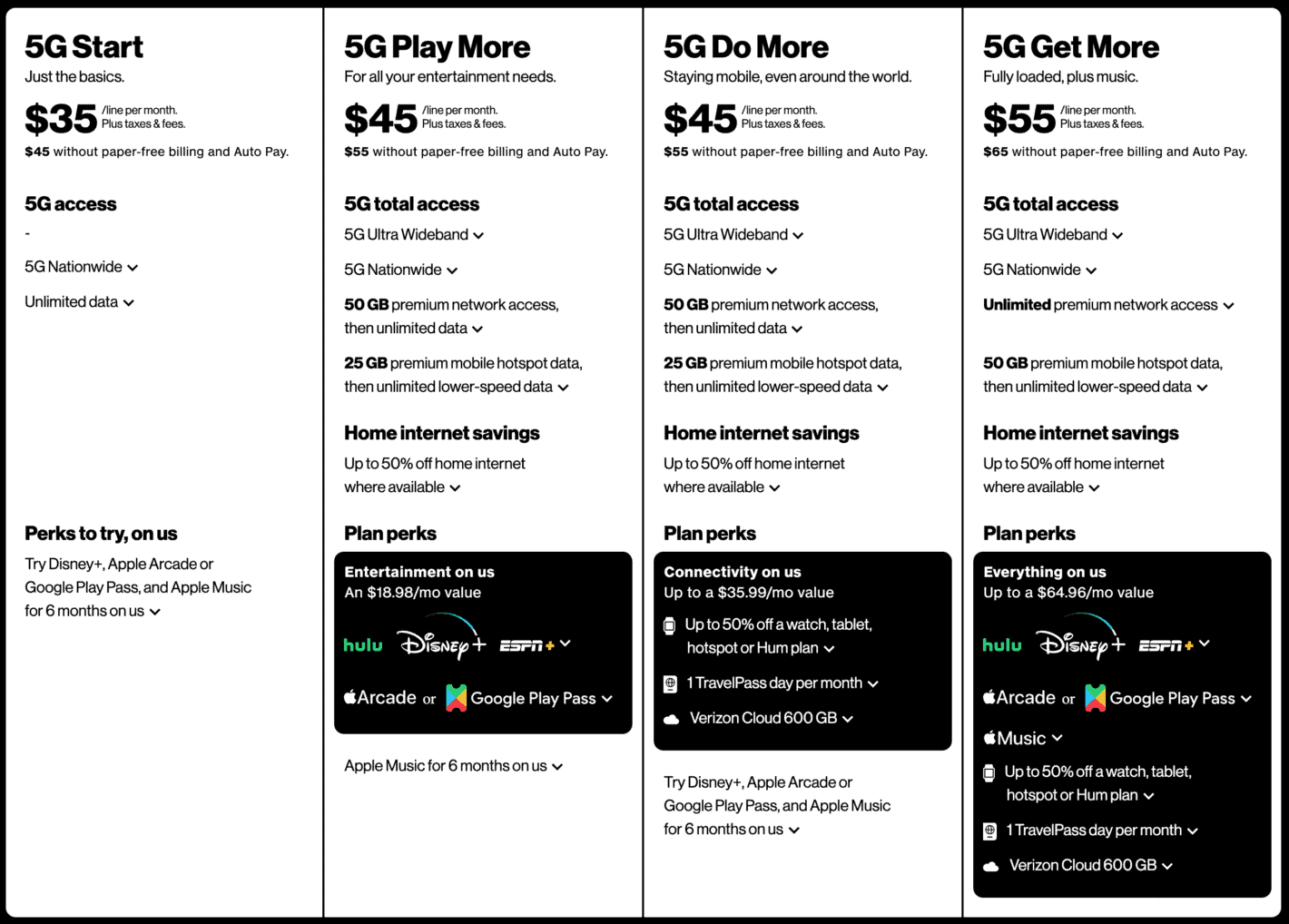 Verizon is offering C-Band under its Ultra Wideband branding, and AT&T has not mentioned anything about its plans just yet.

When will I be able to access C-Band spectrum?

The FAA actually asked Verizon and AT&T to delay launching their C-Band network, due to concerns raised by the airlines. But they only agreed to delay this until January 19. So we could see both networks light up on January 19, 2021.

T-Mobile won’t be launching their C-Band network until late-2023. But T-Mobile is not in a big hurry to do it, since it does have that 2.5GHz mid-band spectrum from its Sprint acquisition.

Why does the FAA have an issue with C-Band?

The airlines and aviation officials have been arguing that the frequencies that C-Band covers could interfere with the instruments used in aircraft and contend that deployments of 5G near airports could endanger takeoff and landing operations. 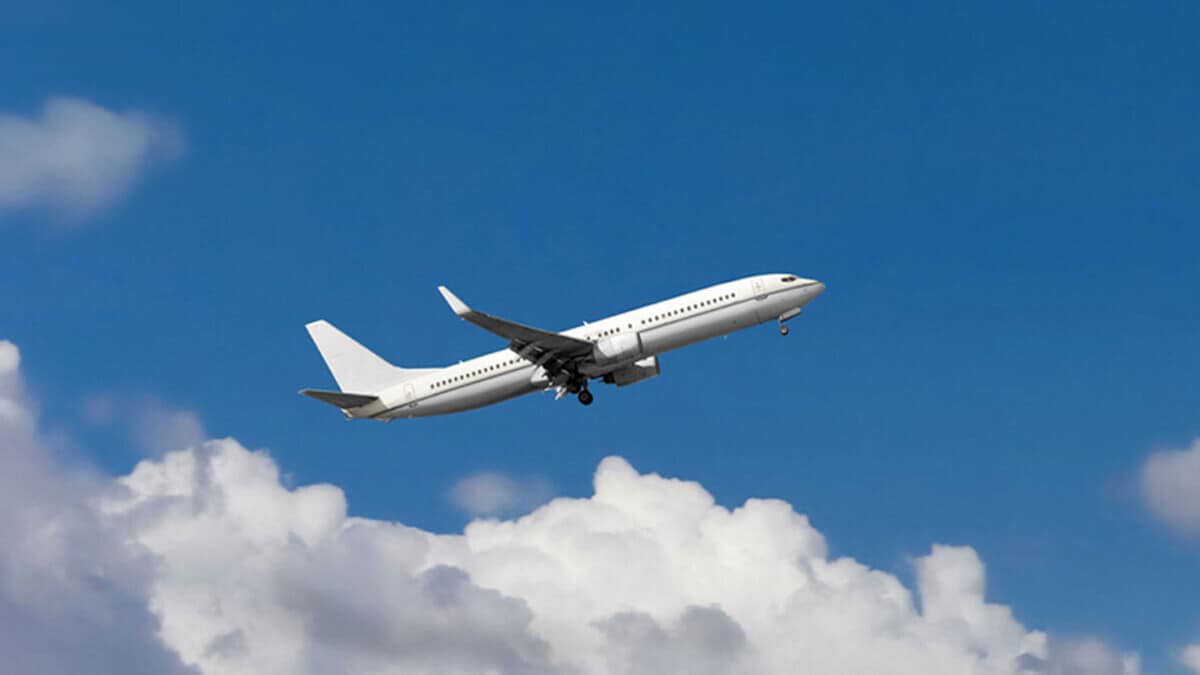 The FCC and the FAA have disagreed on whether C-Band actually interferes with instruments like altimeters that measure in the 4.2-4.4GHz spectrum. Meanwhile the CTIA has argued that 40 countries including Australia, China, France and others, have already deployed over C-Band with no issues involving aircraft.

So does this mean no C-Band in airports? For now, nope. But that could change. Carriers have already deployed mmWave in most airports already, which is arguably more important, as it’ll be able to handle the bandwidth from having thousands of people in a smaller space. So it’s not as big of a deal in an airport as it is in other parts of a city or town.

Do I need C-Band in my next smartphone?

If you are one that does not upgrade your phone all that often – say every 3-4 years – then yes, make sure your next smartphone has C-Band support. But if you upgrade pretty often, then it may not be a big deal for your next phone. But it is still worth making sure it has C-Band support. Since you’ll be able to experience much faster speeds.

C-Band isn’t a switch that will be turned on across the country all at once. So there’s still going to be a few months for some areas to actually get C-Band spectrum.