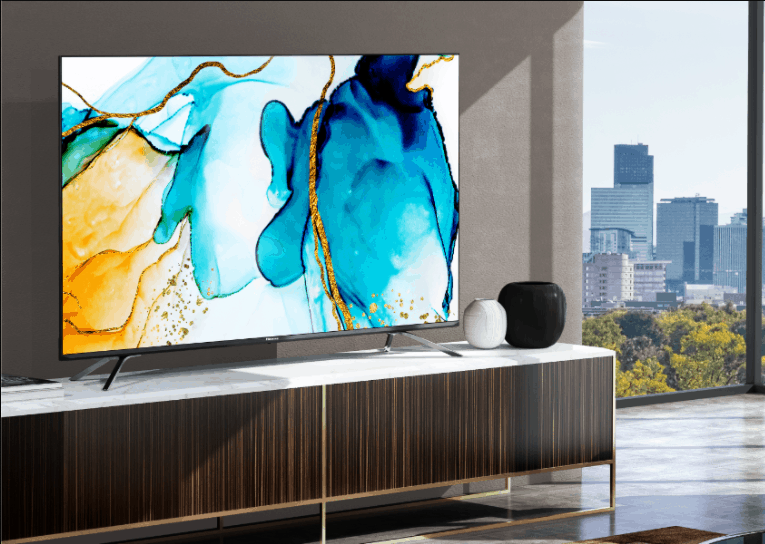 This is the H8G model for those that might be wondering, which is a “mid-range” TV from the company. But still worth this price. In fact, similar TVs would cost you at least $750.

The H8G is a really good TV to pick up. As mentioned, this is a 55-inch 4K TV, which offers up a really great looking display, and it supports HDR. With support for HDR10, HLG and even Dolby Vision. Which is going to give you even better picture quality. Especially if you watch something that was shot in Dolby Vision.

On the audio side, this TV doesn’t disappoint either. With support for Dolby Atmos. Typically built-in speakers are pretty terrible. That’s not the case here. And that is a really good thing to see.

Now, as mentioned, this TV is an Android TV. That’s going to give you access to a ton of great apps. Like Netflix, YouTube TV, YouTube, Google Play Movies & TV, Disney+, ESPN+, Hulu, SHOWTIME ANYWHERE and much more.

There is of course support for Google Cast, allowing you to cast virtually anything onto the display. Which is really useful for those apps without Android TV support.

Because this is Android TV, you also get Google Assistant here. Allowing you to control your smart home products, ask Google questions and much more. Amazon has worked out a deal with Hisense so that you also have support for Amazon Alexa here. Though it can sometimes be a pain to setup, and Google Assistant is able to do more. Since this is Google’s platform.

You can pick up the 55-inch Hisense H8G 4K Android TV from Amazon by clicking here. But you’d better hurry as this price won’t last much longer and may go out of stock soon.