Black Friday 2020 is nearly upon us, and it’s going to be very different from previous years. Primarily due to the global pandemic that we are all facing right now. Black Friday is typically the time of the year where we start holiday shopping and buy stuff just because it’s on sale.

Here’s everything you need to know about Black Friday 2020. Including when it is, what kind of deals to expect, and much more.

What is Black Friday?

Every retailer, including online-only retailers, will discount many products for Black Friday. It’s also a good time to get started on your shopping for the holidays.

But as we’ve seen every year, Black Friday sales start earlier and earlier. This year, retailers started Black Friday way back in October, thanks to Amazon’s Prime Day happening in October versus July. Best Buy has been running Black Friday 2020 sales since October 13. And offering a Black Friday Guarantee, that the product(s) won’t be cheaper on Black Friday, or they will refund you the difference, which is nice.

Black Friday deals will last through Cyber Monday, but not typically the best deals. It’s more like leftovers from Black Friday that most people didn’t buy.

COVID-19, as expected, is having a massive effect on Black Friday this year.

It’s going to mean that more people are going to be shopping online, instead of going into the stores on Black Friday. Which is likely going to result in shipping delays. But it also means that you can shop from your phone instead of camping out in front of Best Buy on Thanksgiving to get that crazy cheap 75-inch TV this year. That’s definitely a really good thing.

On the flip side, COVID-19 is likely going to mean deeper discounts this year. A lot of brick and mortar stores were closed for many months this year, with very little revenue being generated. And Black Friday is the time where they can rectify that a bit. So stores like Best Buy, Macy’s, etc, that had to close their doors at the start of the pandemic, will likely offer better deals than Amazon, Target or Walmart – who really cleaned up during the pandemic.

Luckily, we do have a bit of a glimpse into how COVID-19 will affect Black Friday, thanks to Prime Day happening in October. For the most part, Prime products did ship and arrive within a day or two, during Prime Day. Though, once stock started to run out, we did see those shipping times slip. But for the most part, it was pretty much what you’d normally expect from Amazon Prime shipping. That might not be the case with every other retailer though, and that is important to point out. Since Amazon does have it’s own shipping department that delivers for them. Whereas Best Buy, Walmart and Target will all be relying on UPS and FedEx.

Will Black Friday be on-line only this year?

This year, Black Friday is going to be primarily online. In previous years, we’ve seen Walmart, Best Buy and others open their stores at 10PM on Thanksgiving day. That’s not the case this year. Stores are letting their employees stay home with their families this year. With many even staying closed on Black Friday. And reopening as normal on that Saturday.

Additionally, with it being almost entirely online this year, it means you can shop from your couch with a nice cup of coffee, in your pajamas. That’s a really cool thing, and definitely underrated.

Are there going to be shipping delays?

With Black Friday being almost entirely online this year, that means we will likely see shipping delays. This is one reason that retailers are starting their big Black Friday deals early. So you can shop early and still get your gifts in time for the holidays.

Shippers – FedEX, UPS, DHL and the USPS – have all been running at nearly full capacity since the pandemic started. Even Amazon’s own logistics have been slower now. With Prime shipping being more like two to three day shipping. And it’ll only get worse during the holidays. The shippers are going to do their best to make sure that everything goes out on time, but remember we are still in a pandemic. And people are shopping online more than ever before. For everything from groceries, to prescriptions, to their holiday gifts. 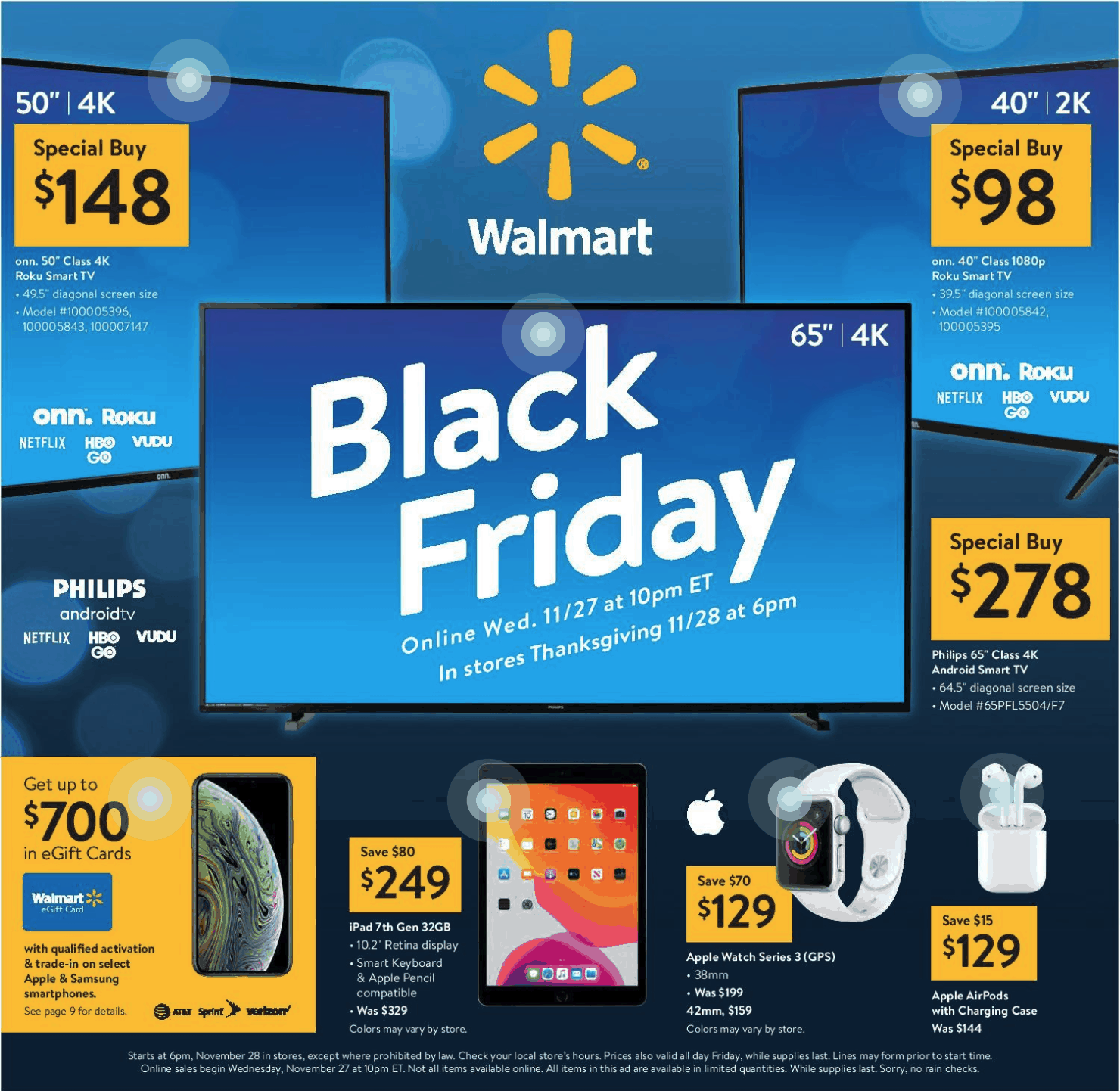 What Black Friday sales can I expect to see?

Everything is going to be on sale, and we do mean everything. Black Friday is the one time of the year where everyone is looking to buy stuff that’s on sale. So companies are going to discount literally everything. Last year, we saw discounts on streaming services. Like Disney+ going for $49.99 per year instead of $69.99. So no matter what you are looking for, it’s going to be on sale.

Amazon is definitely going to be discounting its lineup of Echo Devices. And it’ll likely be the first discounts we see on the new Echo smart speakers it announced last month. Like the Echo and Echo Dot (4th Gen). There will also likely be deals on smart lights, robot vacuums, smart thermostats and everything in between.

As well as some steep discounts on smartphones. Samsung’s latest will likely lead the way in the steepest percentage discount. As we have already seen those drop quite a bit since they launched earlier this year. But expect to see the Pixel 5 also drop in price, drastically.

Will stores announce deals ahead of time?

Stores will be announcing their deals well ahead of Black Friday. So you can have time to prepare for it, and decided where you want to buy each item.

Retailers release “circulars” about a month ahead of the big day. So you can see what is going to be on sale. The sales are pretty much the same from store to store, so it really comes down to which store you’d prefer to shop at. There might be a few items that are different prices at Best Buy versus Staples, but for the most part, they are all the same.

Stores like Walmart, have already announced some of their sales for Black Friday. In fact, Walmart is doing three separate sales starting on November 4, leading up to the actual Black Friday sale. So plenty of stuff to grab there, even before Black Friday.

LG’s popular Nanocell85 4K TV is also on sale for up to $100 off of its regular price right now. Which is a really great deal too.

How can I prepare for Black Friday?

The best way to prepare for Black Friday is make a list. Start with making a list of things you want to buy people for the holidays, including your mom, dad, siblings, etc. Then make a separate list of items you want to buy (but don’t necessarily need). That way you know what to look out for, when checking out these Black Friday deals. Especially since you’re not going to have a lot of time to think about what to buy during Black Friday. As these deals are going to go really quickly.

This also helps you not to overspend on things that you don’t need. Things you bought just because it was on sale. This is why two lists are definitely helpful. The stuff you need – who doesn’t love saving on stuff you’re going to be buying anyways – and then one full of stuff you want.

It’s not about buying stuff just because it is on sale, but spending your money smarter.

Should I wait til after Black Friday to shop?

You can, but it’s recommended not too. Most of the bigger deals are going to be on Black Friday and through Cyber Week. After that, products will be on sale, but not as discounted as they were on Black Friday.

Of course, if you need some help with sales on Black Friday and throughout the holiday shopping season, AndroidHeadlines is here to help. As we do all year round, and have been doing for the past seven years, we’ll be rounding up the best deals daily. So you’ll want to keep an eye on this link here, so you don’t miss any of the good deals.

Should I care about Black Friday?

While Black Friday is a way for retailers to make their Q4 numbers look impressive, it’s also great for consumers, as we can get products at massive discounts. That’s not something that happens everyday. Some of the deals that we see on Black Friday, we may never see again. Take the NVIDIA SHIELD TV for example, it dropped to $129 last year. It has not dropped that low since then. In fact, it has only gone on sale once since last year. And that was to $139.

So yeah, you should definitely care about Black Friday. It’s an easy way to get a head start on your holiday shopping too.