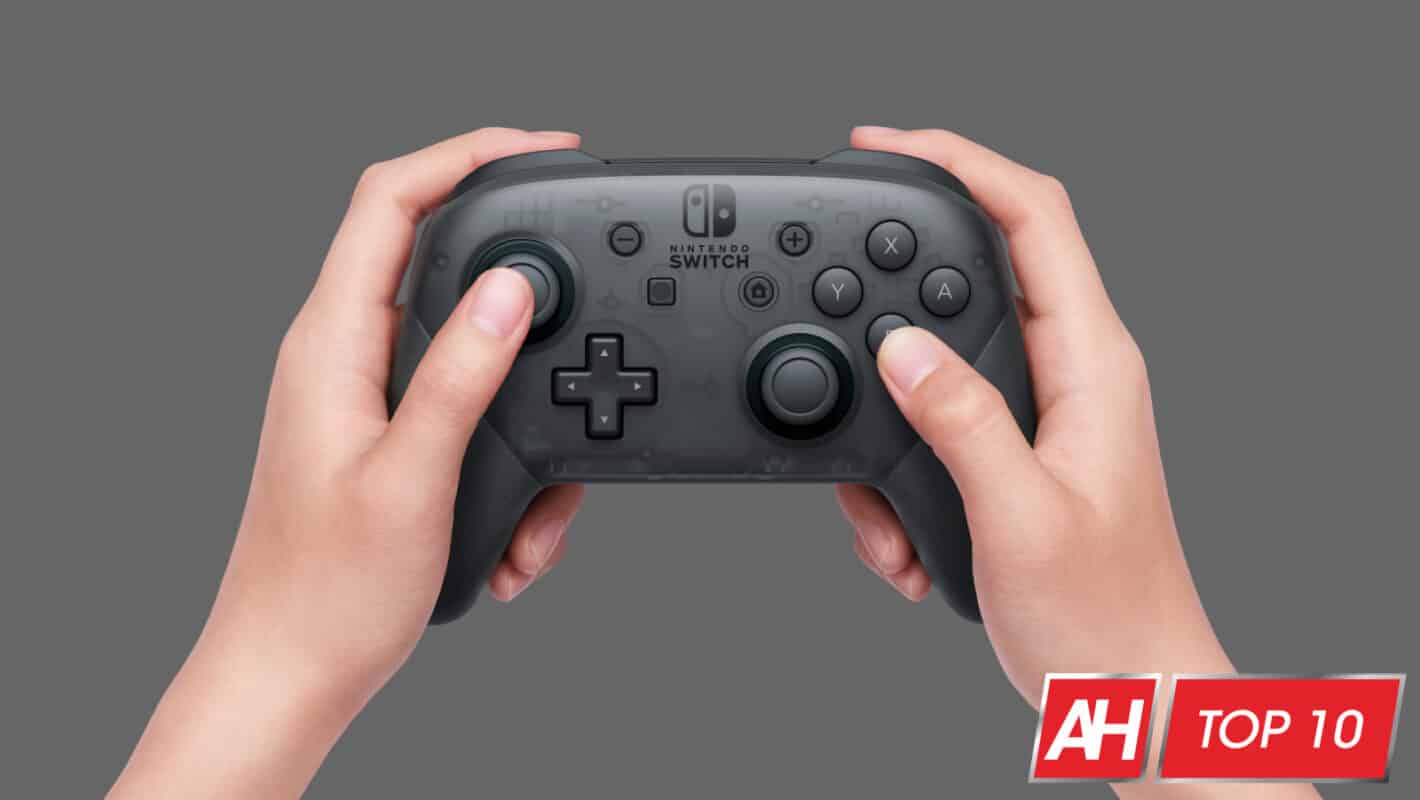 The Nintendo Switch is great as a portable console but if you play it while docked to a TV, you may want to use a controller other than the Joy-Con, and these are some of the best wireless controllers we’ve found for the Switch. Nintendo of course makes its own, but there are a number of other brands that make third-party options. And some of the best wireless Switch controllers out there don’t come from Nintendo. Which might surprise you. Then again maybe it doesn’t.

But I digress. If you’re looking for some of the best wireless Nintendo Switch controllers to use for your own setup, we’ve rounded up a number of them in this guide that are worth checking out. Keep in mind that you can also still use the Joy-Con controllers that come with the Switch if you prefer. But some of these other options will have more features and may even feel more comfortable to hold for longer gaming sessions.

With all of that said, here are the best wireless controllers for Switch whether it’s docked or not. 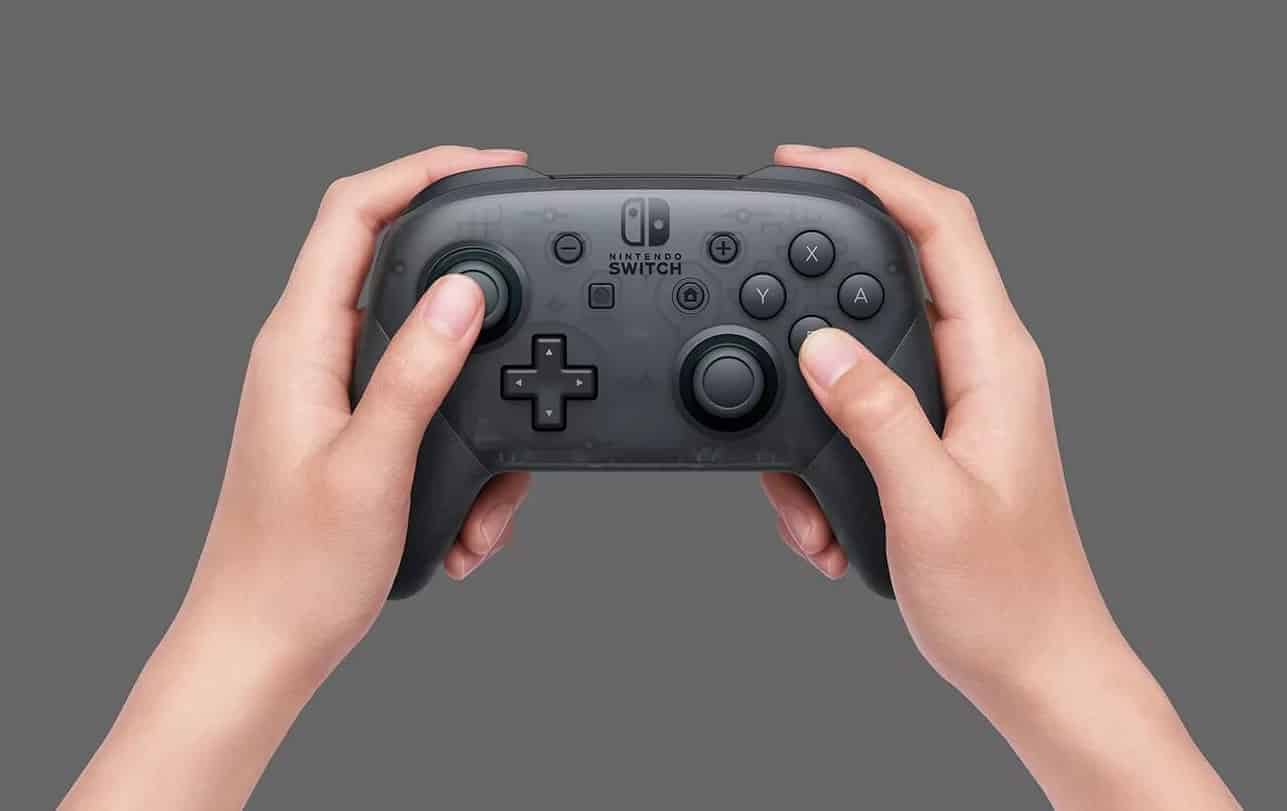 Nintendo’s own Pro controller is a trusty workhorse of a controller with decent battery life, it’s comfortable to hold, and has all the buttons you need. Some feel it’s a bit expensive for what you’re getting, but it is honestly one of the best wireless controllers for the Nintendo Switch out there. Even among some of the other options.

It also comes in various colors, and designs featuring some of Nintendo’s iconic franchises like Pokémon, Zelda and more. It also charges via USB-C ad even supports the amiibos which is a cool little add-on.

If you want to stick with Nintendo products, then you can’t go wrong here. And it’s far and away better than the new wireless N64 controller for your Switch needs. Unless you feel like being nostalgic. 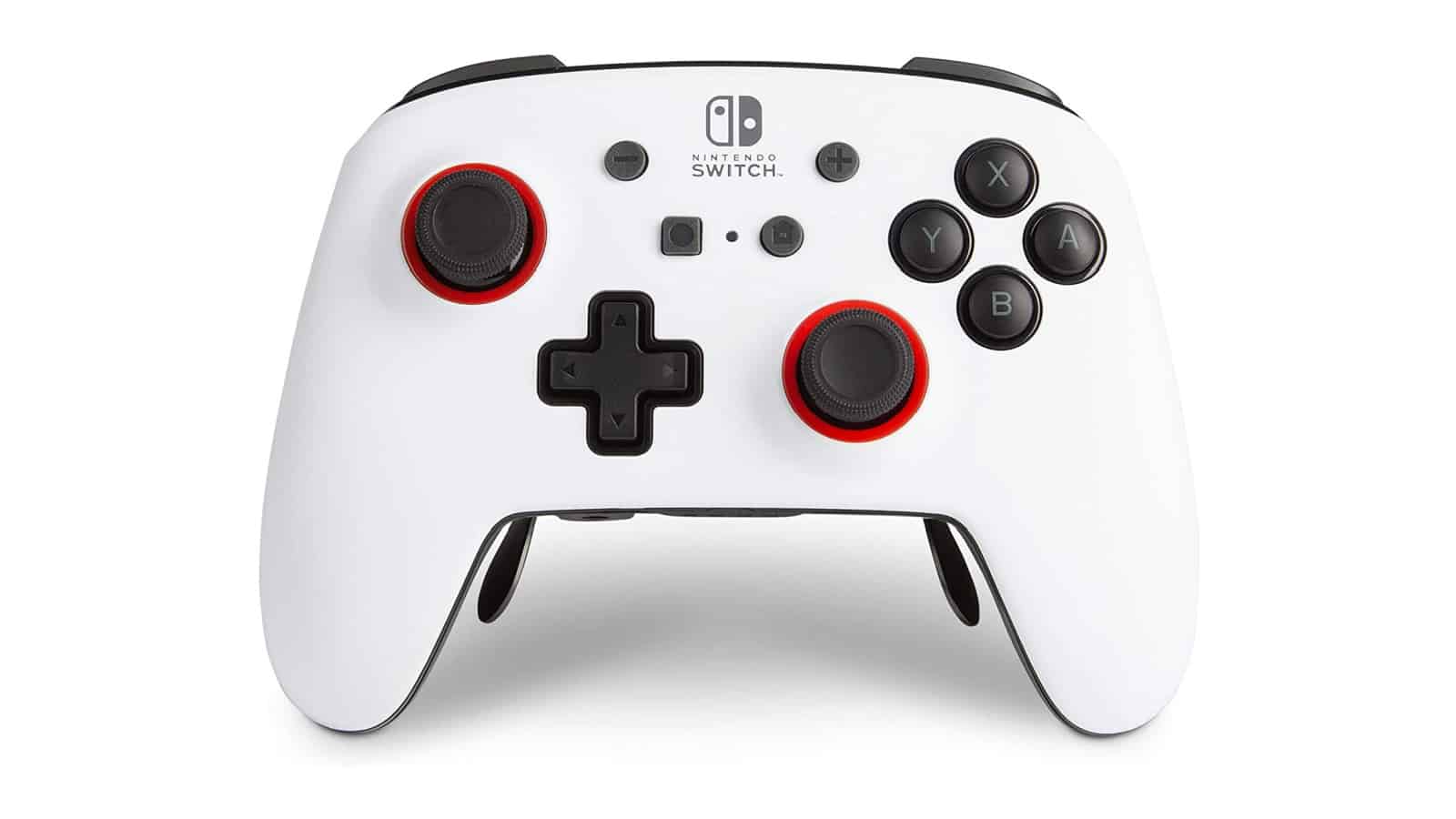 What we really like about the Switch Fusion Pro is that it has the mappable four back paddle buttons. Which are in addition to the regular buttons on the front and the triggers on the top.

For all intents and purposes, this looks and feels a lot like a Switch Pro controller from Nintendo. But the paddles on the back can make a huge difference when playing certain games. So you end up with a slight advantage and there’s nothing wrong with that. Especially if you like to play games that are competitive like Super Smash Bros. Ultimate.

This controller does support motion controls, however it does not support HD Rumble, IR, or the Amiibos. So if you want those features, then this is not the controller to go with. 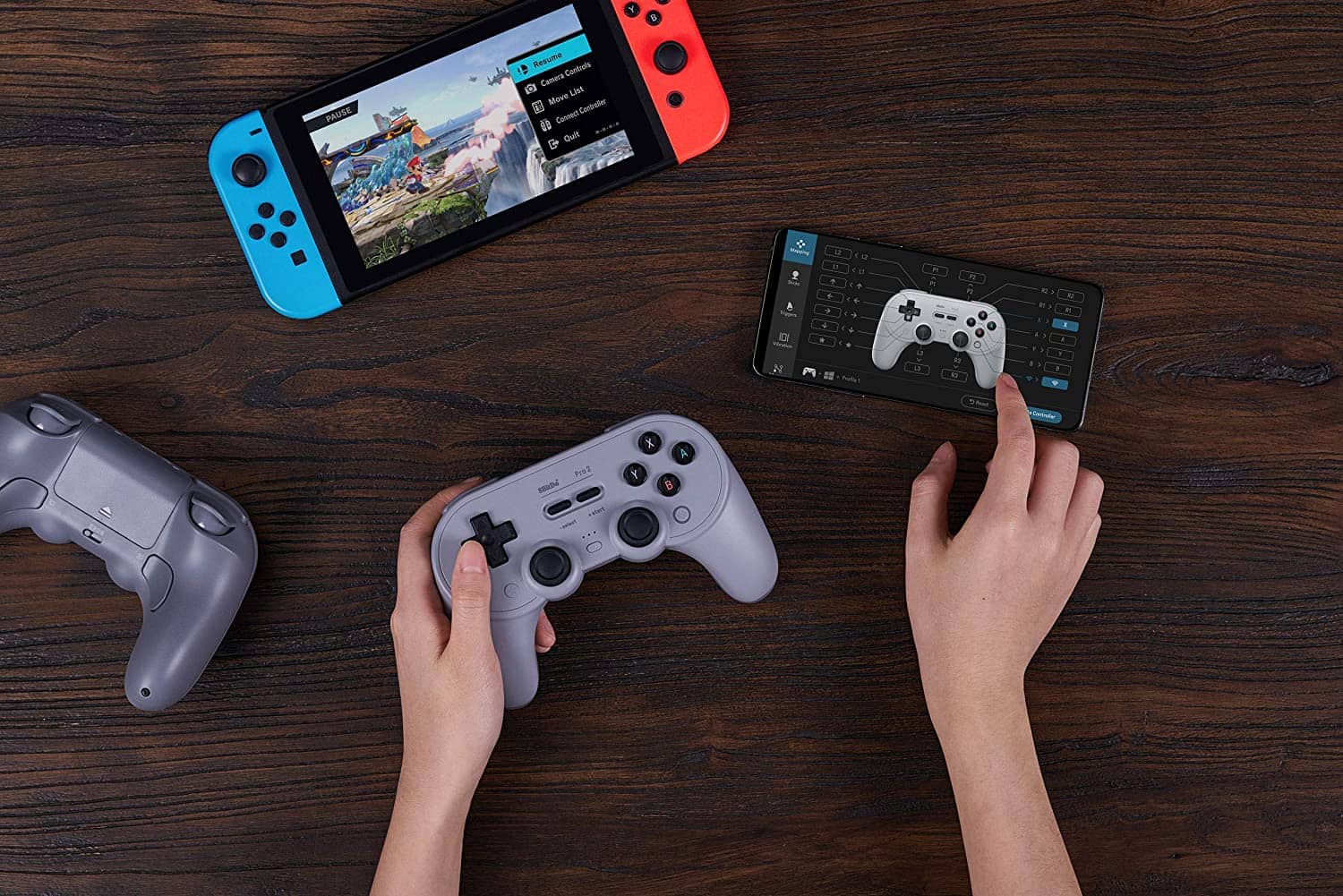 If you do like a bit of nostalgia, the controllers from 8BitDo can fill that role. The Pro 2 mixes classic SNES stylings with modernized features that you’d see in more advanced controllers. For instance, the Pro 2 has two back paddle buttons similar to what you find on the back of the Steam Deck or controllers like the Instinct Pro from SCUF for the Xbox.

The Pro 2 comes in multiple colors that include Black, Gray, and G Classic which is basically the color scheme from the Game Boy. It also charges via USB-C and can last for up to 20 hours on a single charge. Additionally, the controller is compatible with Mac, Android, iOS, PC, Steam, and Raspberry Pi.

Not to mention for the cost, this is an excellent option. 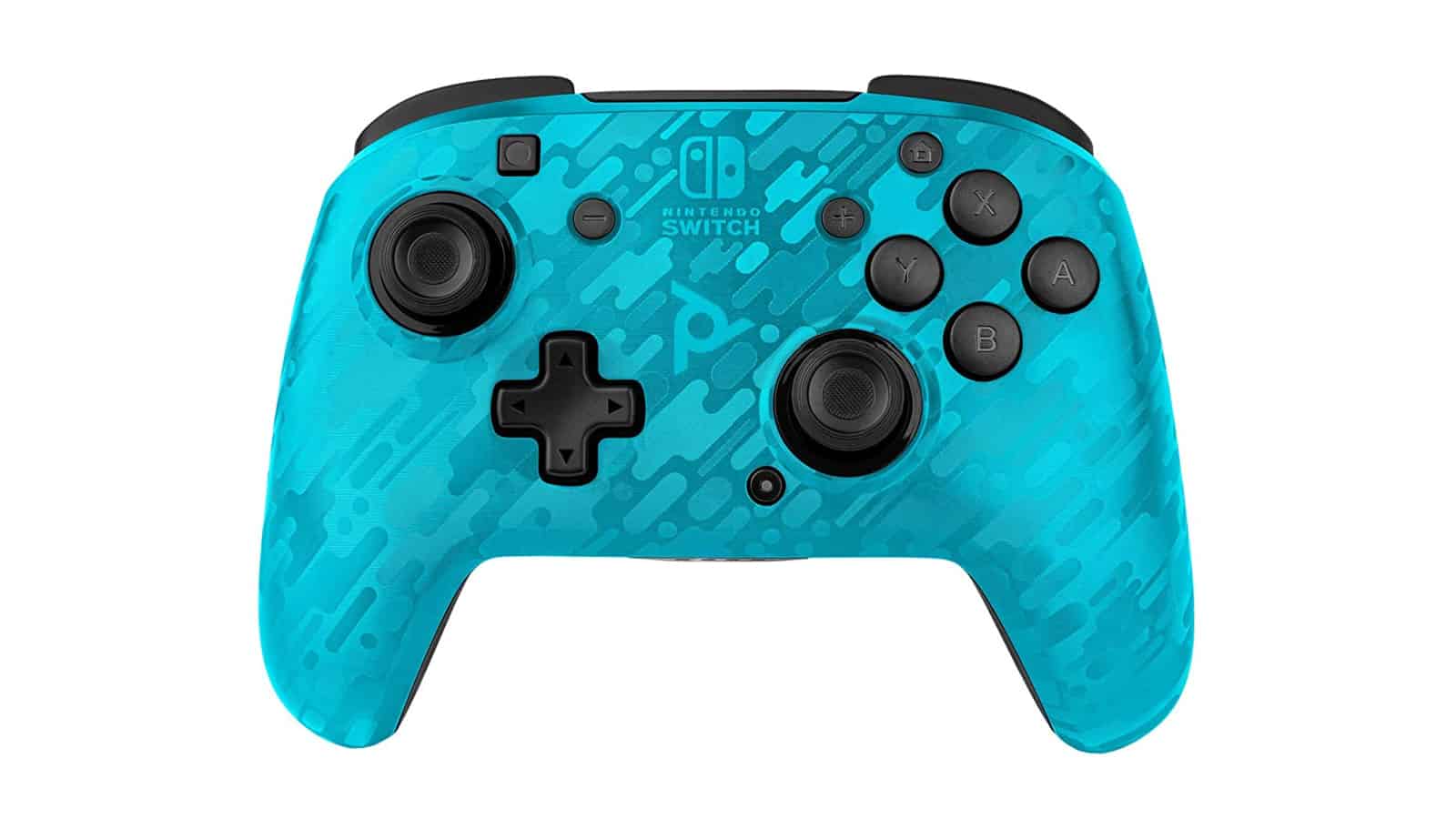 All the buttons are also customizable and you can swap out faceplates. It’s quite a bit cheaper than the Pro Controller too. So if you want a controller that feels like the Pro Controller from Nintendo, this is a great option without having to pay the higher cost. If you don’t mind giving up a couple of features.

When it comes to battery life, it should last for up to hours. And it has a range of up to 40 feet and works with all Switch models. 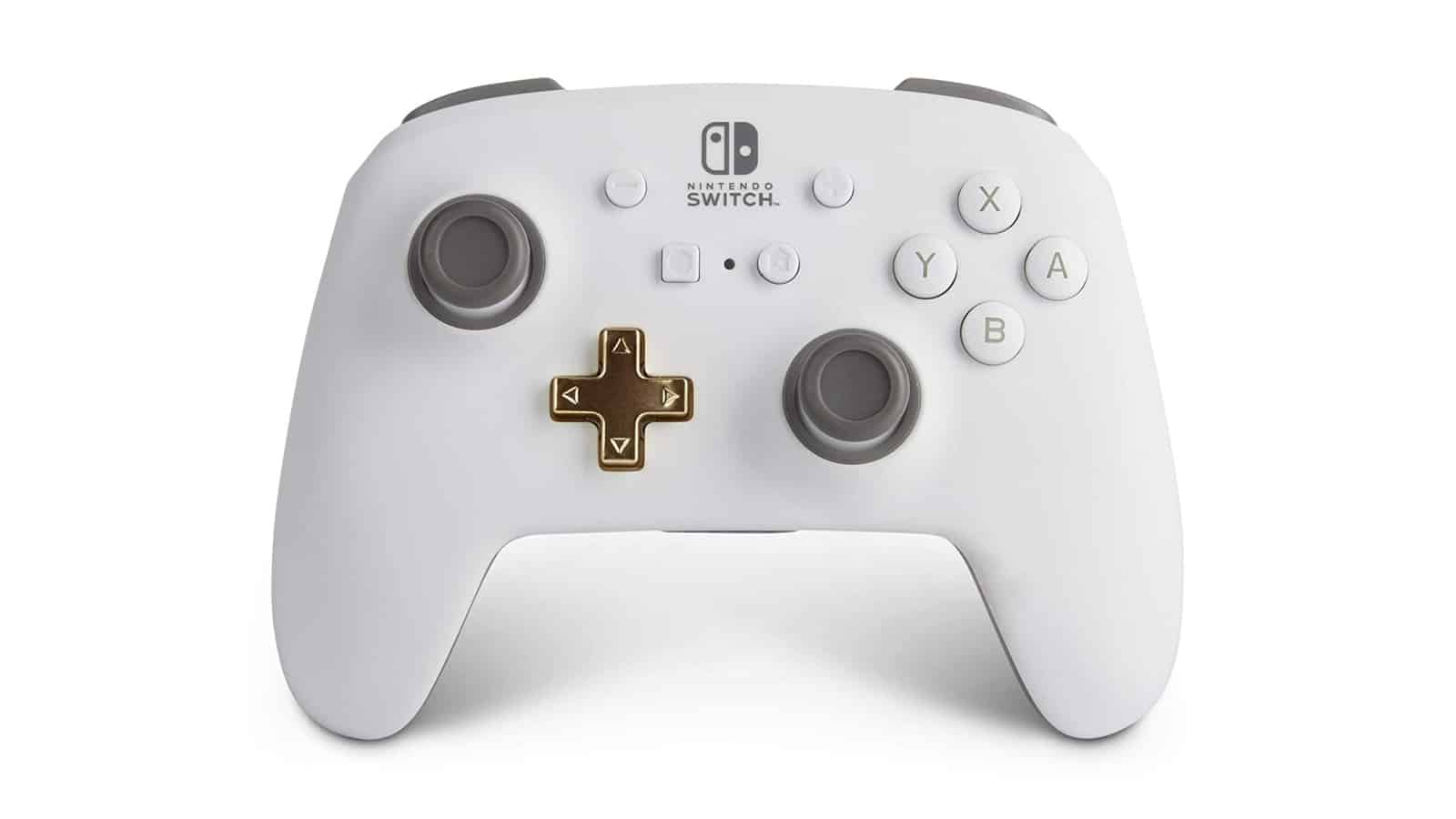 Next up is the Enhanced controller from PowerA. This is a little more like the Pro Controller in that it has less buttons than the Fusion Pro. But, it still comes with two back buttons for additional controls. Which is a slight step up from the Pro Controller that Nintendo makes. This one also comes in multiple colors and styles.

What we really liked about it is that it comes with a low battery indicator. Though this isn’t necessarily needed if you’re keeping track of the remaining charge, we’d wager that most people aren’t doing that. So the indicator is a nice visual touch.

Speaking of battery life, it should last for up to 30 hours on a single charge. And if you need to, it can still be used when you plug it in like most other wireless controllers out there. 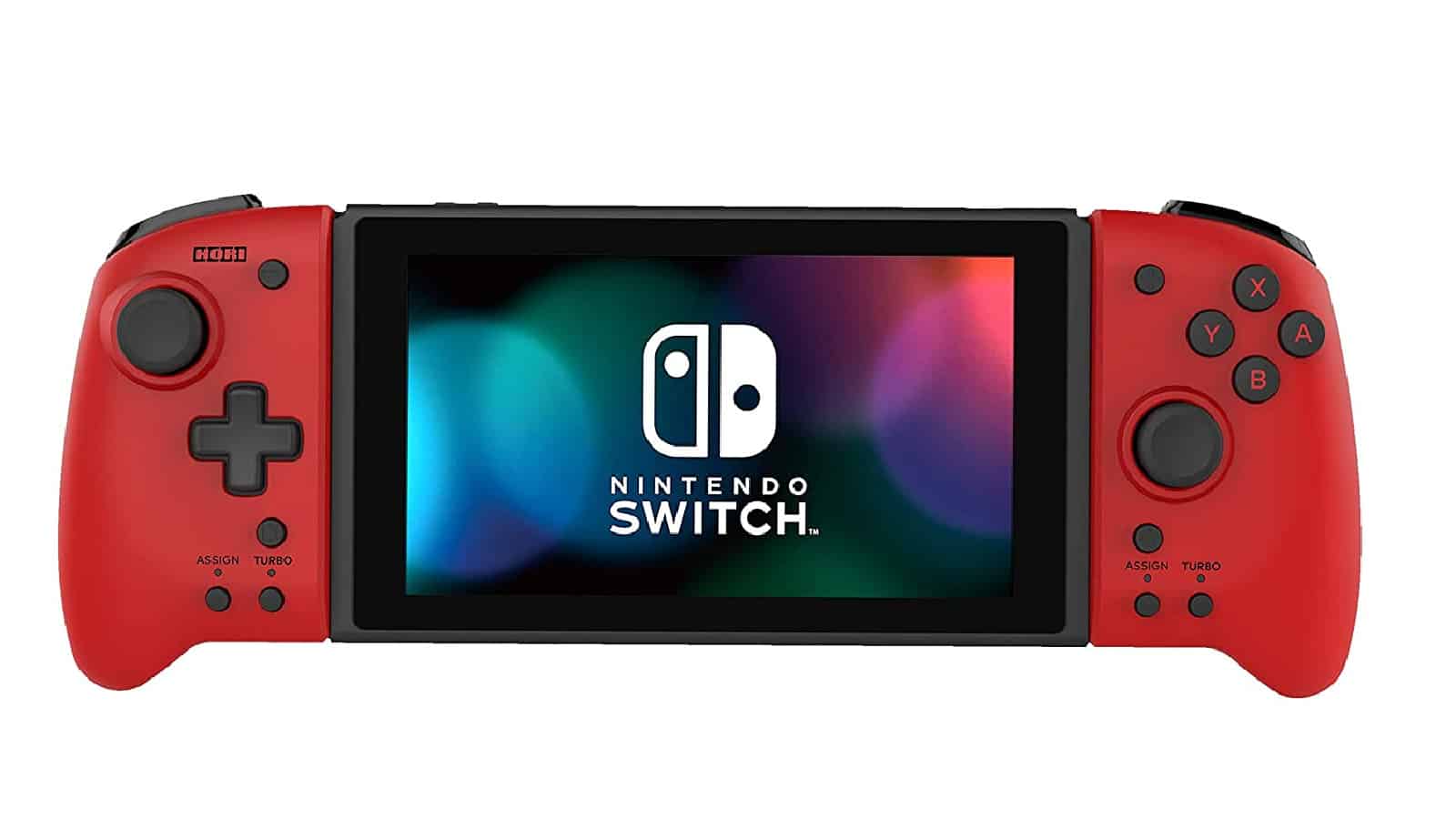 If you’re simply looking for a better option for playing in handheld mode, the Split Pad Pro from Hori is all you need. With contoured hand grips it’s way easier and more comfortable to hold the Switch than with the Joy-Con. Not to mention you have two assignable rear triggers and two turbo function buttons.

With multiple color options at your disposal, this controller also gives you a more full-size experience in handheld mode. Which is a lot better than you might expect. And we think it’s well worth it for the price for those that take their Switch with them just about everywhere. And, it’s also dock-friendly. So you can leave the controller attached while the Switch is docked and move to using a regular controller if you ever want to. 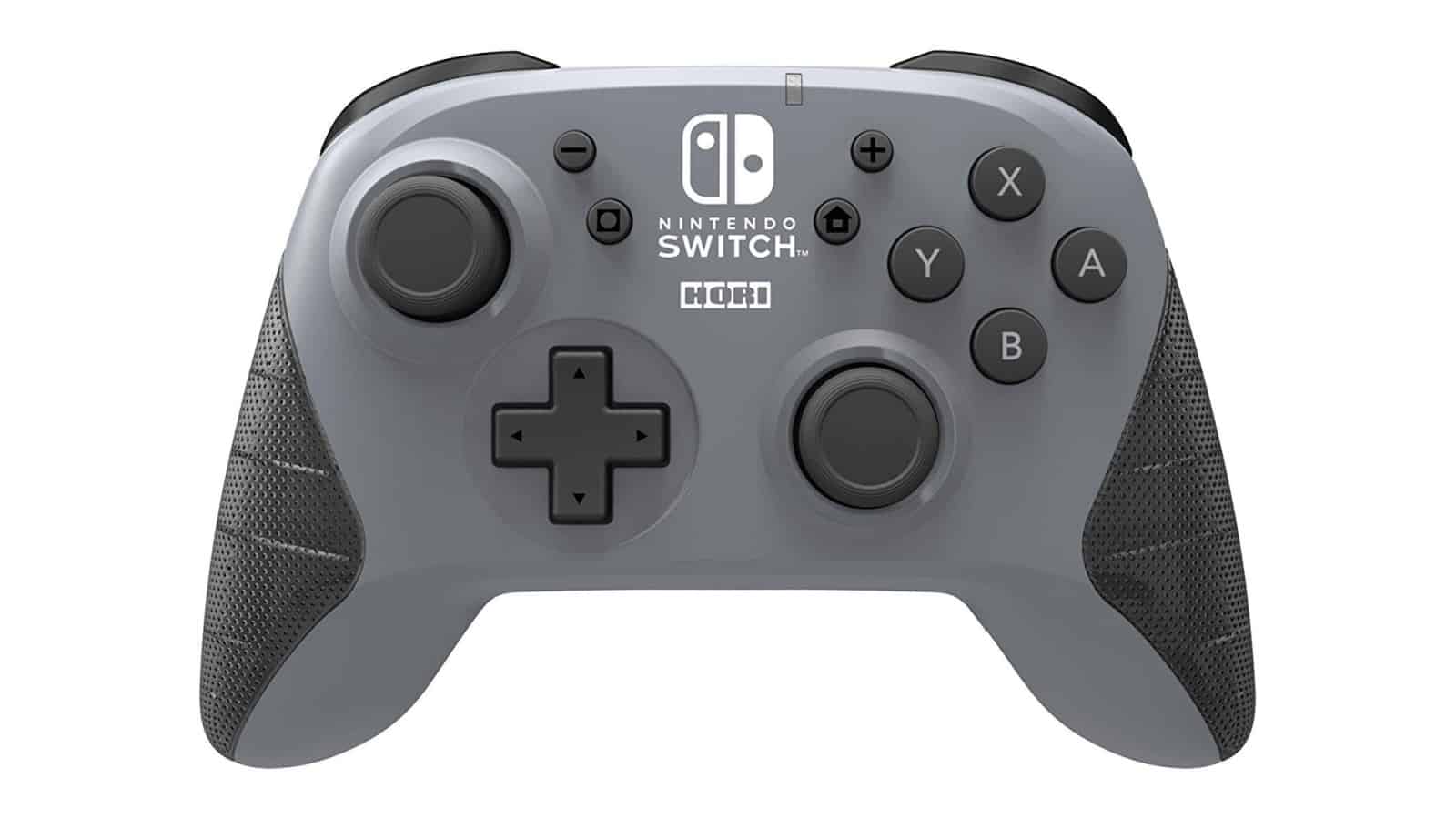 In addition to the Split Pad Pro, Hori also makes a great full-size controller called the HORIPAD. This one has some more defined grips on the sides. Which some people might find are perfect for sweaty hands. If you’re like me and play for long hours, your hands probably sweat a little. And these grippier grips really do wonders to prevent your hand from slipping.

The button layout is pretty much what you’d expect as this is a standard wireless controller for Switch. For the most part. Which means no additional back buttons or paddles. It has up to 32 feet of range and should last up to 15 hours on a single charge. Comparing that to the Fusion Pro and Faceoff Deluxe Wireless, it’s not as good for longevity or from longer distances.

But putting those things aside this is a great Switch controller that will get the job done. 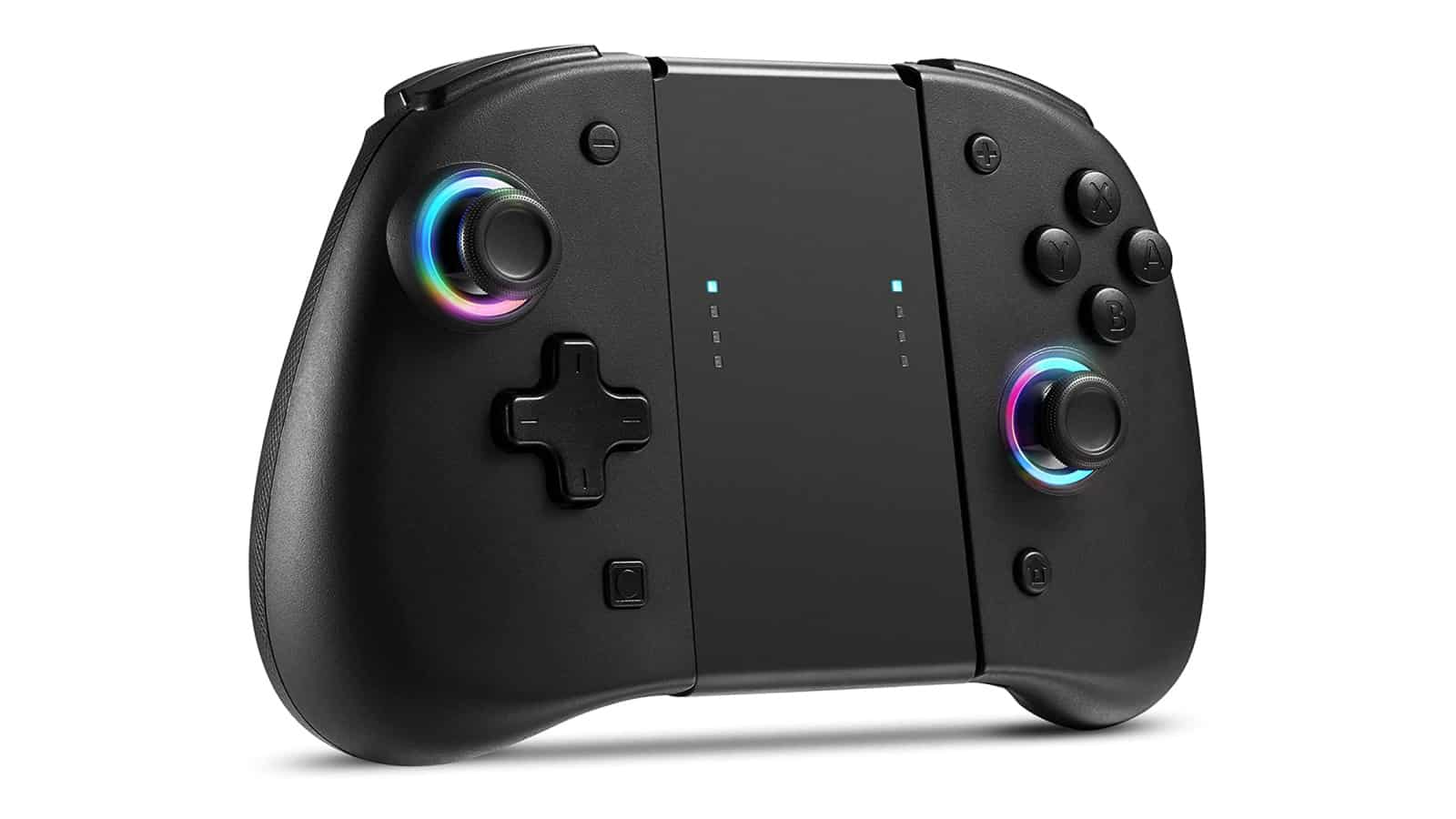 This is a Joy-Con alternative and is meant to be used in the same way the Joy-Con left and right controllers are when they’re latched into the comfort grip that Nintendo makes. The cool thing too is that since these are third-party Joy-Con controllers, they can be latched onto the Switch for portable play too. You also get two turbo functions on the back.

Plus there’s a few more added benefits. If you like RGB, these feature RGB LEDs around the joy sticks. Additionally, there’s two remappable buttons on the rear (one on each side). Think of this as a similar controller to the Split Pad Pro from Hori. 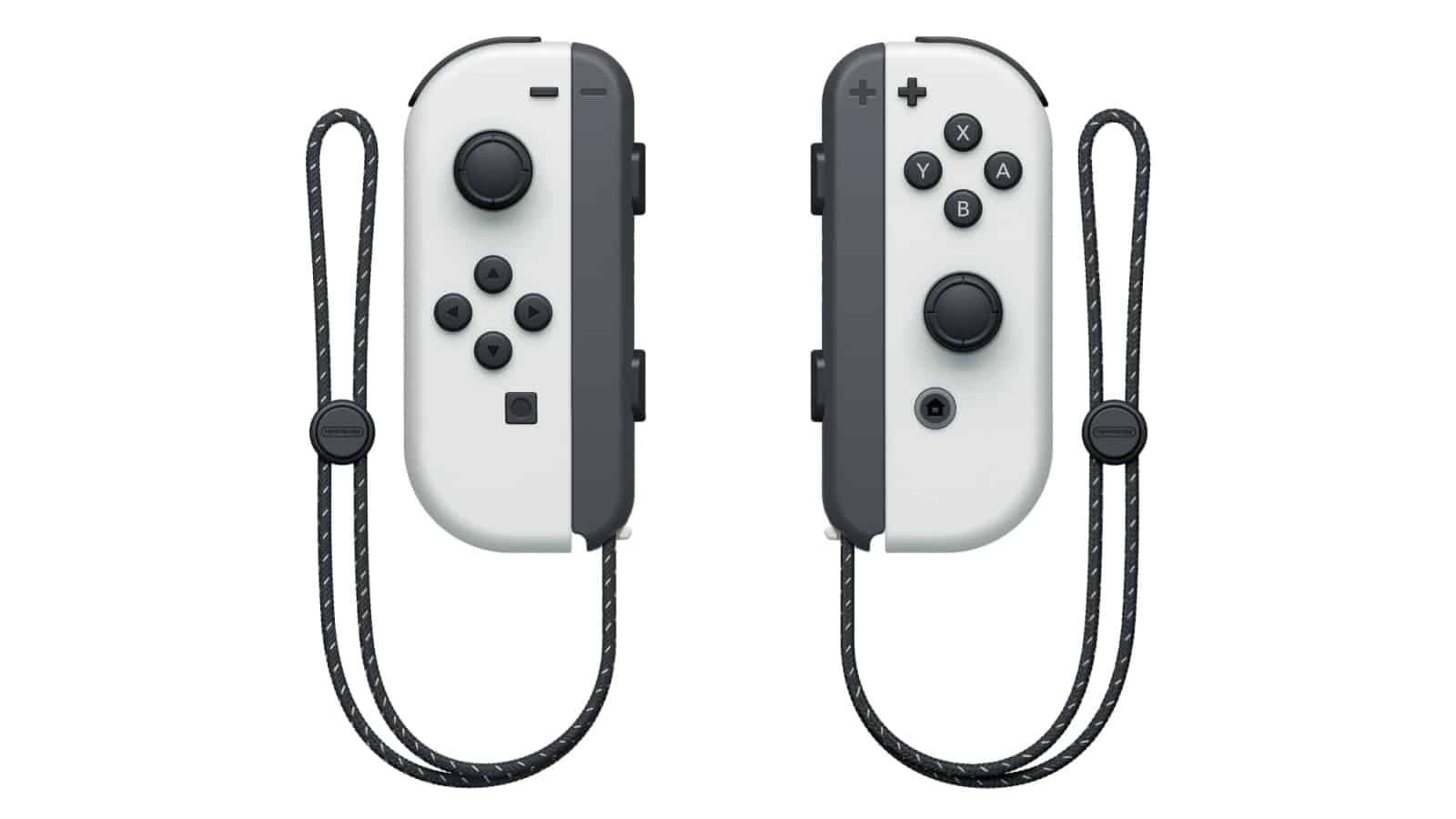 If you like the official Joy-Con then you can’t really go wrong with additional Joy-Con pairs. And with so many different color options, it’s never a bad idea to add some to your collection. This also means you’ll have backups if the battery for your main pair dies. Which means no downtime for you if they happen to die in the middle of playing. 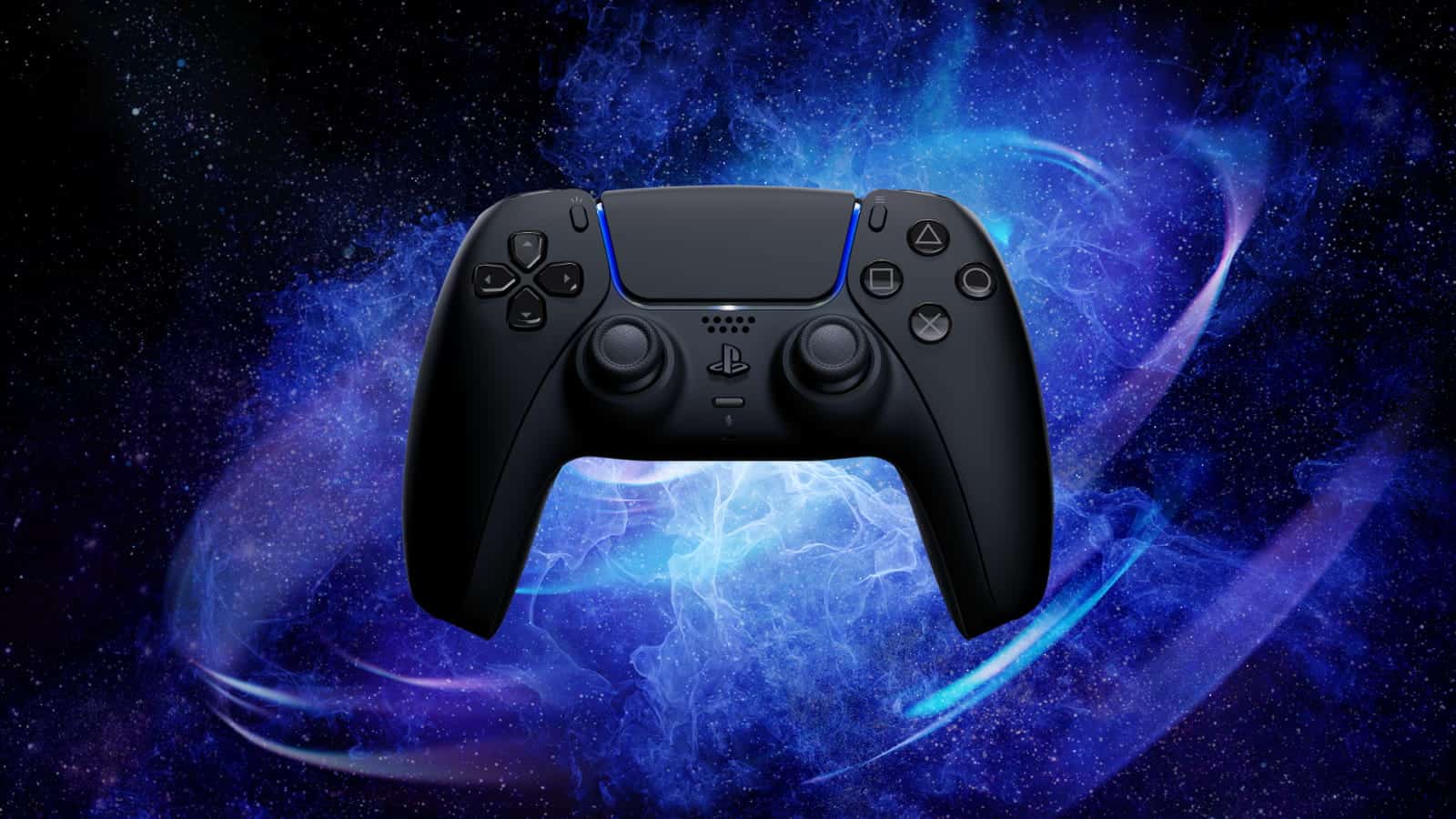 You may or may not have known that you can use the PS5’s DualSense controller with the Nintendo Switch. But you can as it is compatible. While you won’t get the benefits of the advanced haptics or the adaptive triggers, you can still use it to play games. And since this is one of the best controllers out there period, we’d say it’s a great option for playing Switch games when you either have it docked or while using the kickstand.